7 years ago, I bought my first mountain bike. 3 months after that, I slammed it into a downed tree at 30mph and broke it in half. So I bought a new frame. A Soma B Side. This is the story of that bike. Now, this bike has already been featured on this site, in one of its most radical (read: stupid and most likely mechanically unsafe) configurations.

John already made that build look real purdy… This is another ode to that bike, but also an ode to how it has evolved, and how I’ve evolved with it.

When I first started riding bikes, I was mostly touring. Naturally, my first MTB’s had quite a bit of touring DNA bolted onto them. Pictured here is the first post I made on Instagram about this bike, all built up. Also, from what I can tell, my first attempt at a side profile shot of a bike, cranks all cattywampus, part of the back tire cut off, climbing helmet haphazardly hanging there (my first #dangle?). How cute. 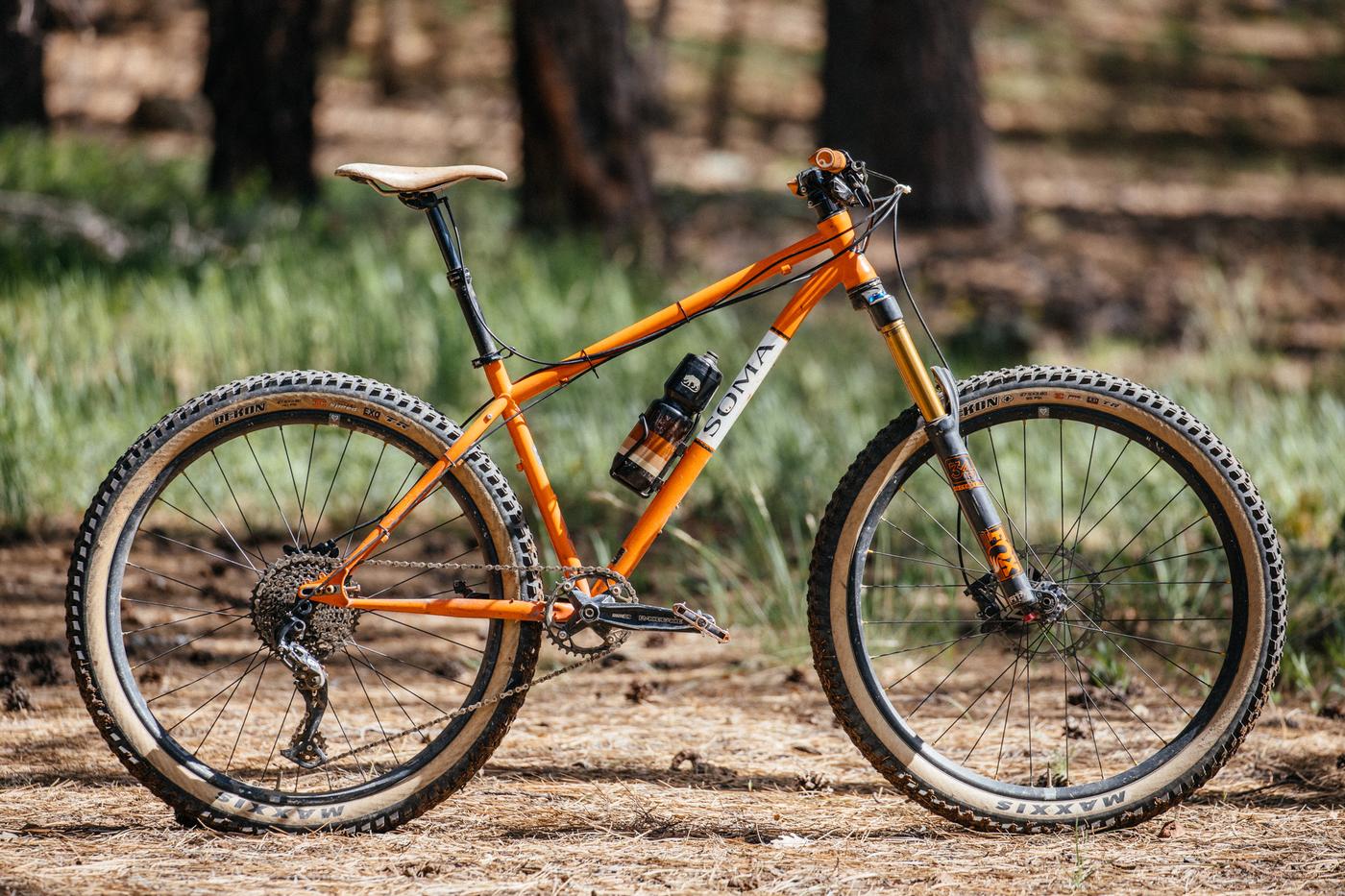 But, let’s talk about how it makes one feel. That triple crank, delicious. Real tall rigid post with a Selle Anatomica saddle and a Carradice Bagman all ready to go. An X-Fusion fork that I bought off of Craigslist and stripped some bolts lowering the travel and mustache-adorned duct tape to protect my chainstay. That frame bag? My first piece of “bikepacking” gear. It held mostly snacks, and in this photo, bear spray. Trusty BB7 brakes and some nice n’ narrow WTB Frequency i23 rims. De-Lish! 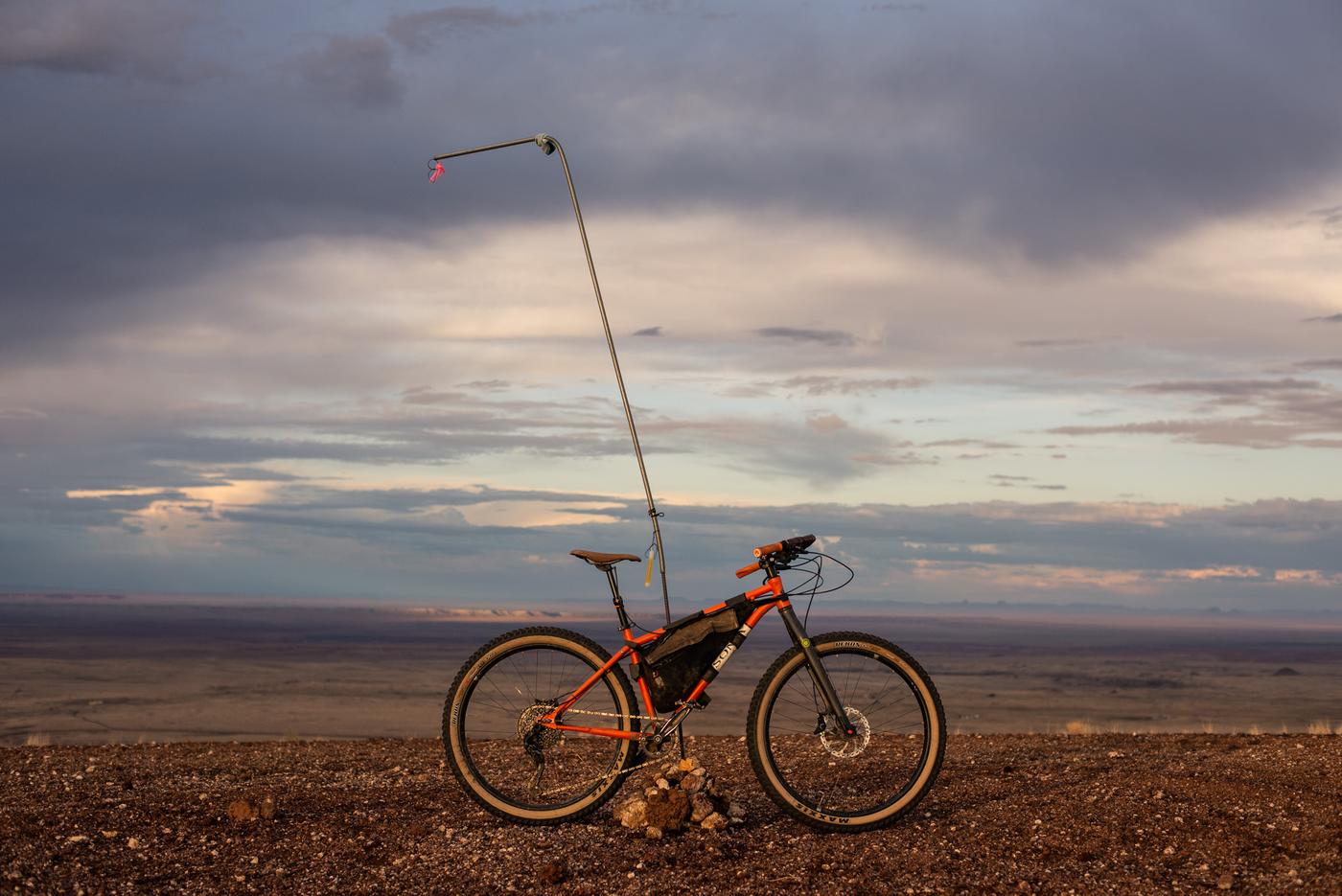 Next and we have some examples of that same build, taking me to places I never dreamed I would go by bike. Remote alpine lakes, Antz Basin in the Boulder-White Clouds before it was illegal, and a trailless ridge near where I grew up that required strapping the bike to a backcountry ski pack just to get it up there. By that time, I think I had put some proper MTB bars on it. And by proper I mean not so backswept I tickled my spleen by turning them. They were still probably under 700mm. And let’s not forget it’s time in Fruita when I thought that I could be all Enduro by wearing GODDAMN SKI GOGGLES and DH kneepads. But why would I wear anything other than that XC jersey from a high school I didn’t go to?

Still one of the best “rides” I’ve ever had 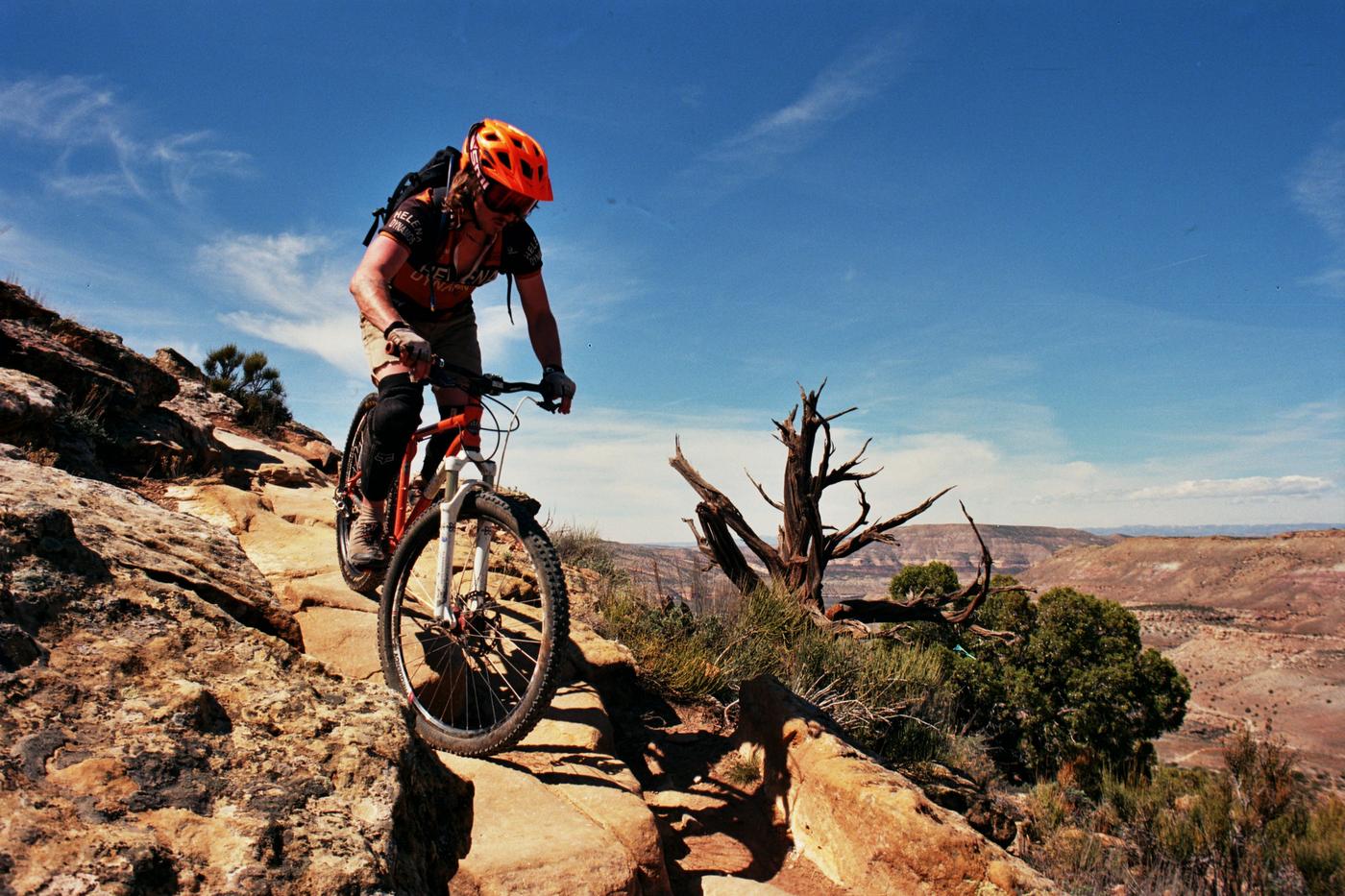 I wasn’t hip. I just liked riding bikes. I had never heard of the Radavist, or really anything beyond touring forums and bikepacking subreddits.

Fast forward a few years. That bike got built up and torn down so many times- single speed 26+, full touring with some WTB Horizons and racks on it…I think I even fit 29ers in there once. And it kept on ticking. It spent the next part of its life as a full on bikepacking rig, with big ol’ 27.5+ tires: 3.0 Chronicles, 2.8 Rekons, and I think a 2.6 Forekaster at some point. I’ve lost track. That was after I scored a used and cut Firestarter fork from Red Barn Bikes in Hamilton, MT.

This build took me all over the Colorado Plateau, into the Uinta foothills, and plenty of dirt road and singletrack shenanigans in-between. This was probably the most capable form the bike had ever been in. Oh, and I finally made it 1x! Mostly because I ripped a pedal out of a crank in Washington and had to get a replacement. The only option was a 165mm Gusset crank with a 34t oval ring. That crank died too, but the chainring is still here. Though I did have to bend it back last week with a vise grip and BB tool. 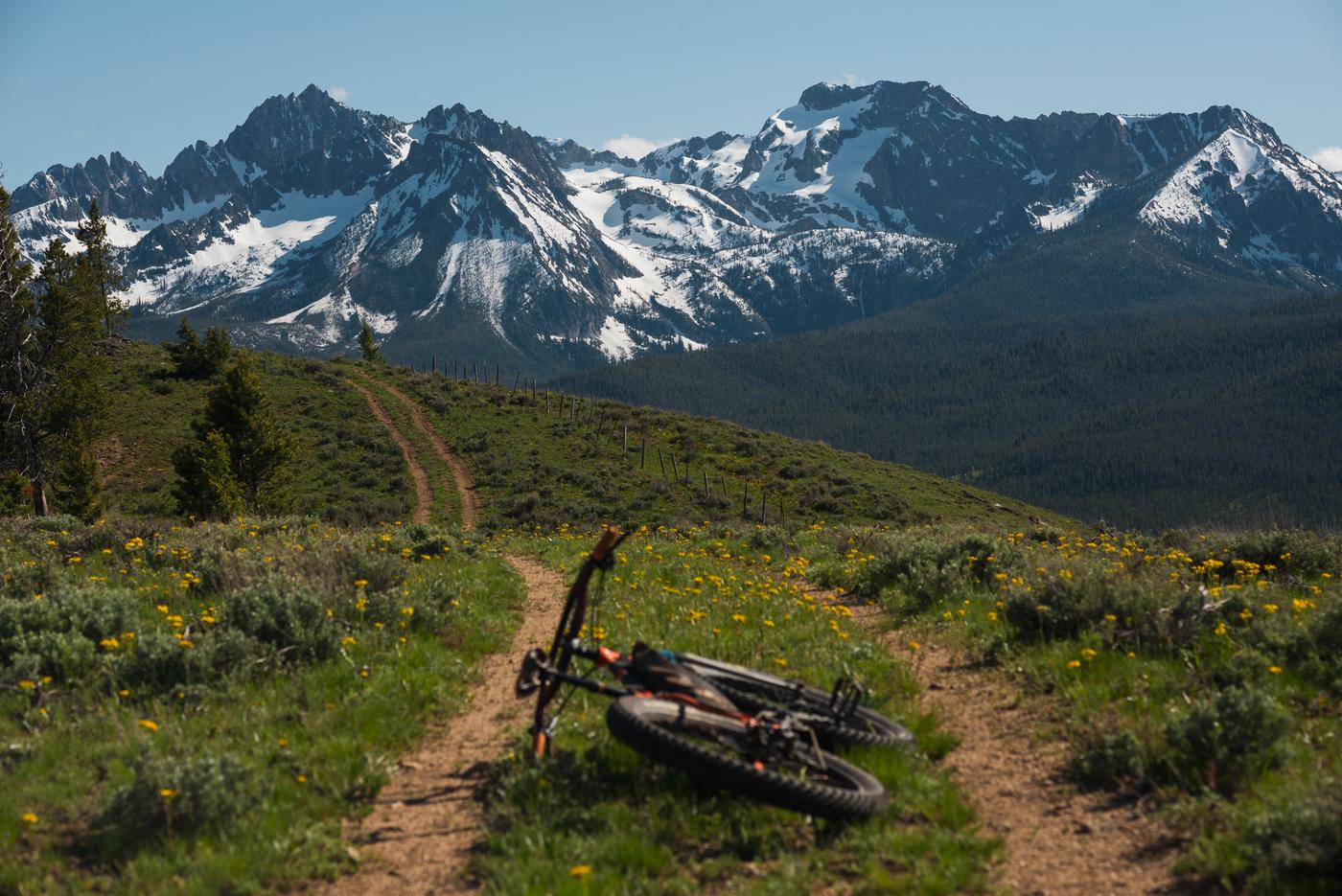 After it’s brief stint as a 150mm 27.5+ rig that was featured here, I decided that this bike needed a facelift, and to get a little weirder. The Jones Bars/Firestarter combo went back on. I put some cheap wheels on it, and made it single speed. Threw some lighter, faster tires on it. Rode it; liked it. Then I took it all apart and Spray.Biked’ the hell out of it.
Valves not remotely in line with tire logos, but it ain’t no show bike! 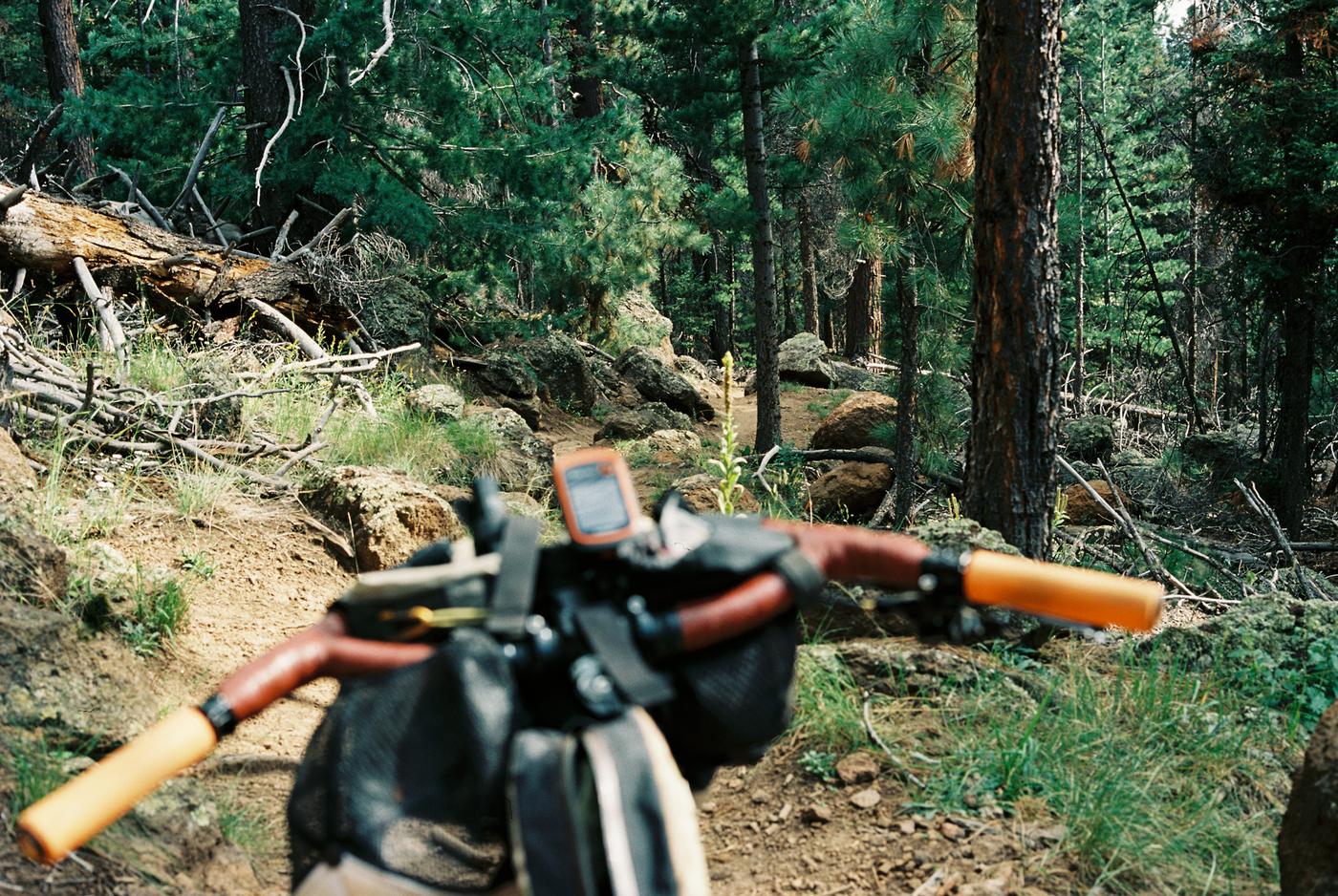 Now, I’m not a painter. I can hardly draw. But I wanted to give it a whirl. I chose Milan Celadon 2, Fluro Pink, and some Keirin Flake Kirameki Gold to really make er’ sparkle. I decided to fade the pink into the Celadon and masked off a few ridiculous and crooked racing stripes and a RUBBER SIDE UP sticker as to not forget that dreamsicle orange. It still wasn’t silly enough, so I splattered some components and painted the fork bolts pink, too. Oh and that saddle? WTB Silverado Ti that I found in a parts bin. It was thrashed, but a good friend re-upholstered it with boat leather. 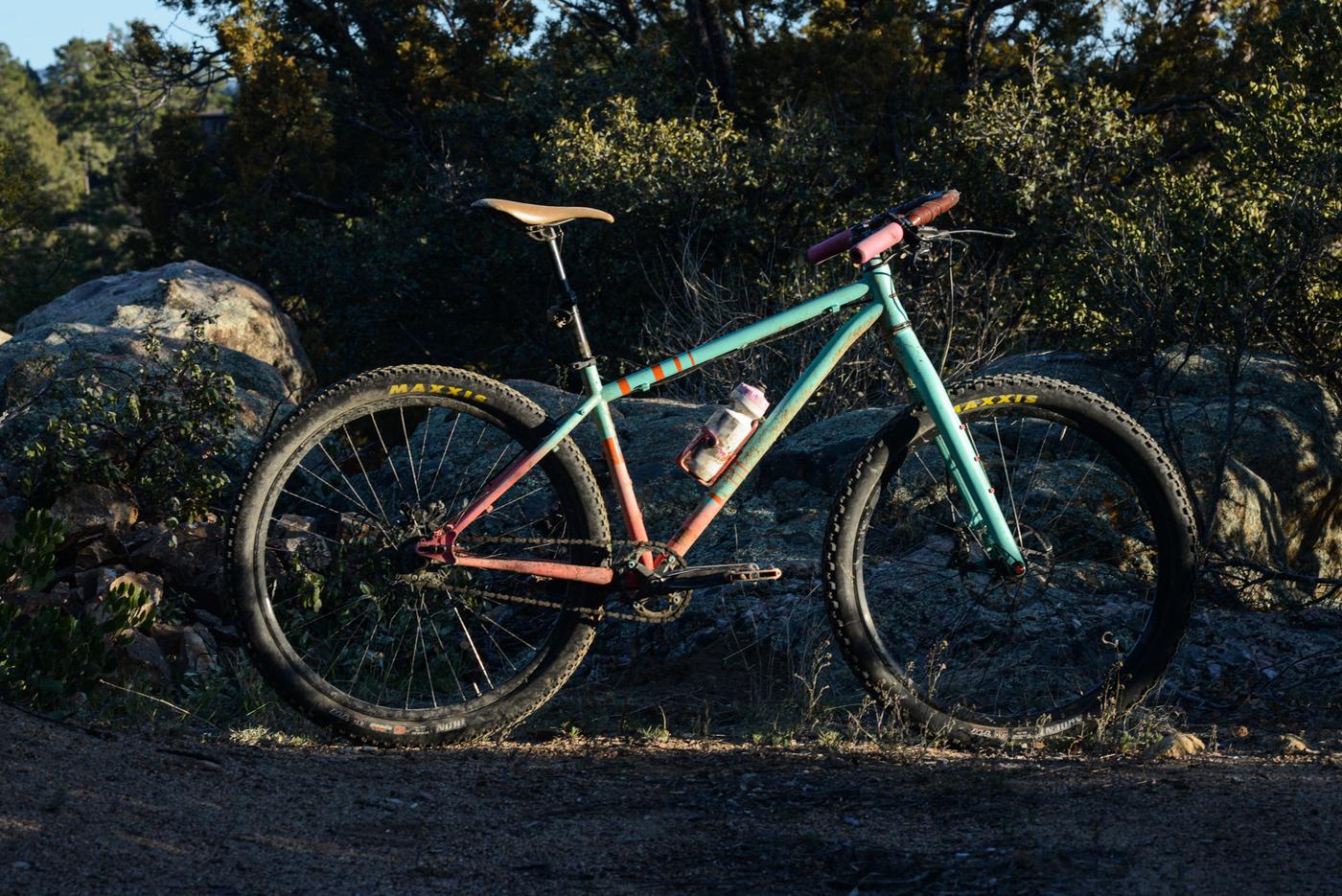 Last week I put a cute little bell on it. The dropper post sticks, and I think the seat tube is getting ovalized because my post keeps slipping. The frame is slightly bent, and I sorta love that. 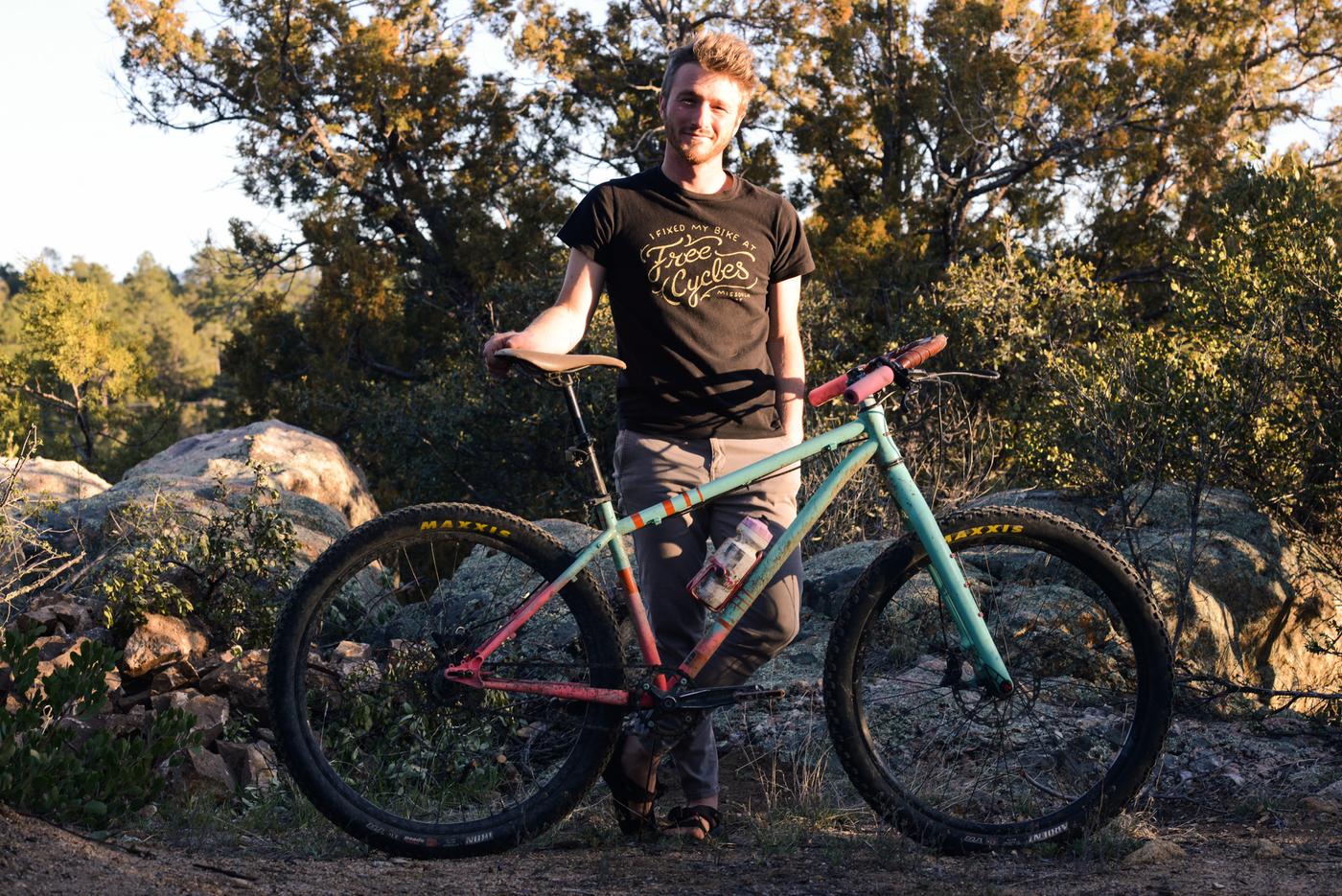 It’s not about the bike. Until it is. This silly rig has been with me through all of that, and more. It’s moved with me more times than almost any other object I own. And that’s worth something, so today, goddamnit, it is about the bike. I’ve changed, and it’s changed along with me.

Maybe I’m a bit more hip now, and maybe I’ve learned a thing or two about how to properly photograph and ride a bike (still a lot to learn!). I don’t wear jerseys and ski goggles much anymore. But I still love riding bikes. Is this thing as rowdy as my full sus? Nah. Is it as pretty as other bikes I’ve owned? Who cares.

It is my oldest bike, and my smiles per mile are always high when I ride it.

Isn’t what all of this is about anyway?