In addition to riding some amazing purpose-built singletrack in my former hometown of West Michigan this past summer (more on that to come!), another highlight was linking up with Mitch Mileski for a very unexpected type of trail riding. Mitch manages the Fulton Street location of the Grand Rapids Bicycle Co. and, having also grown up in Grand Rapids (just much more recently than me) he knows the city very well and was generous to show off a few hidden gems. I met up with Mitch early on a moody weekday morning with a typical summer weather forecast calling for a 50% chance of precipitation. 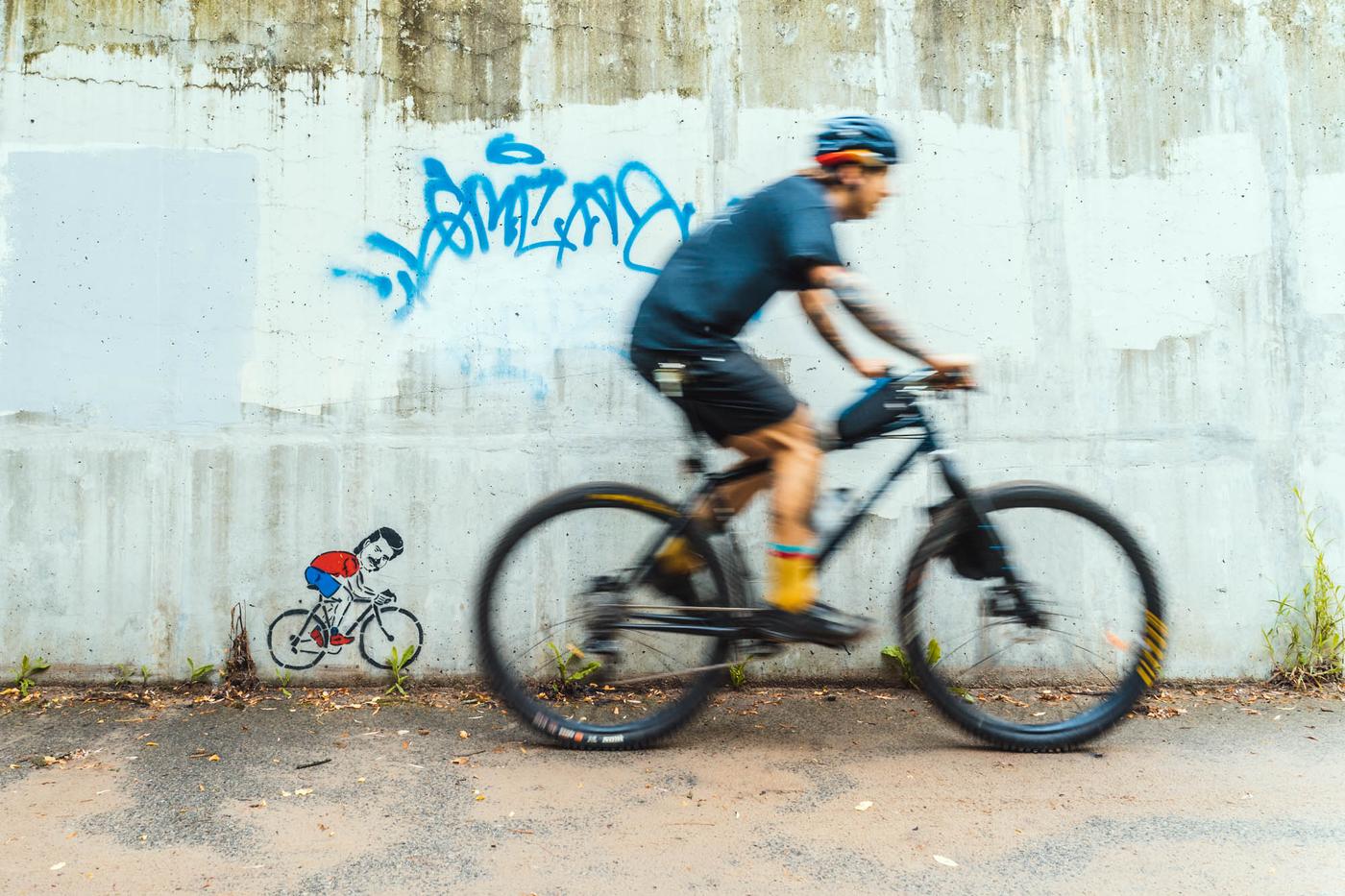 When Mitch texted before we were set to meet, he mentioned riding some “urban” stuff, causing me to mentally plan for some chilleur urban bike paths and maybe stopping for snacks or coffee along the way. Having lived in various parts of Grand Rapids for so many years, I thought I knew it well and couldn’t fathom where one might go to find singletrack anywhere near the GRBCO shop on Fulton St. Well, Mitch really showed me! 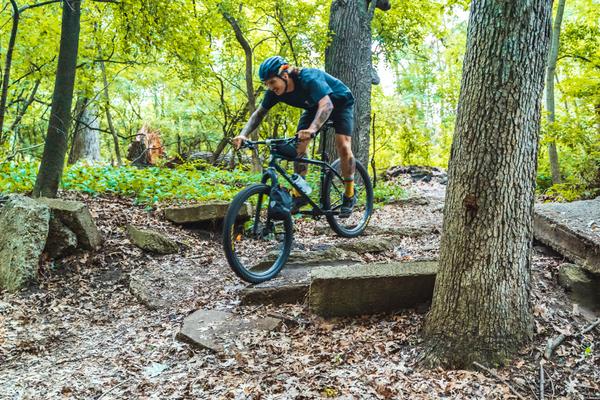 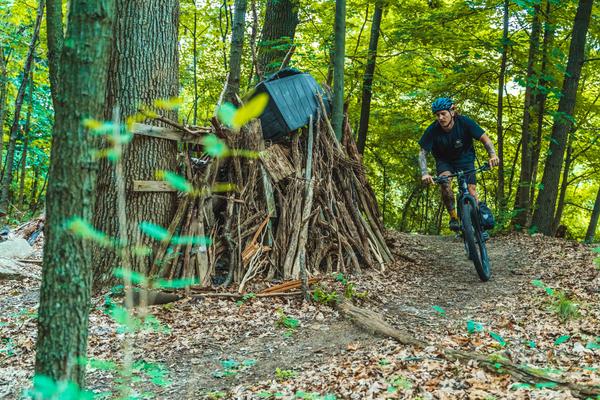 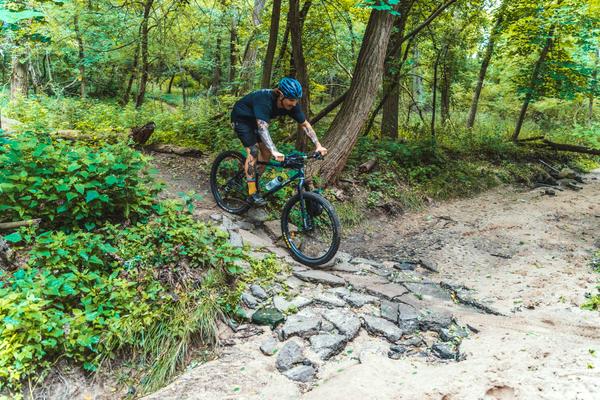 We rolled out from the shop, heading south through Eastown, to a stormwater runoff patch of land sandwiched between a couple of cemeteries just north of Indian Trails golf course. Known as “The Underground,” this stretch of singletrack is tightly wound through a fairly narrow sliver of hillside and takes advantage of natural obstacles like roots and other implements such as large chunks of discarded concrete and makeshift log structures. After covering a few miles in the underground, we headed further south for a rip around Ken-O-Sha Park before following trails and paths around Plaster Creek to the GR Bike Park near 28th Street and Buchanan. 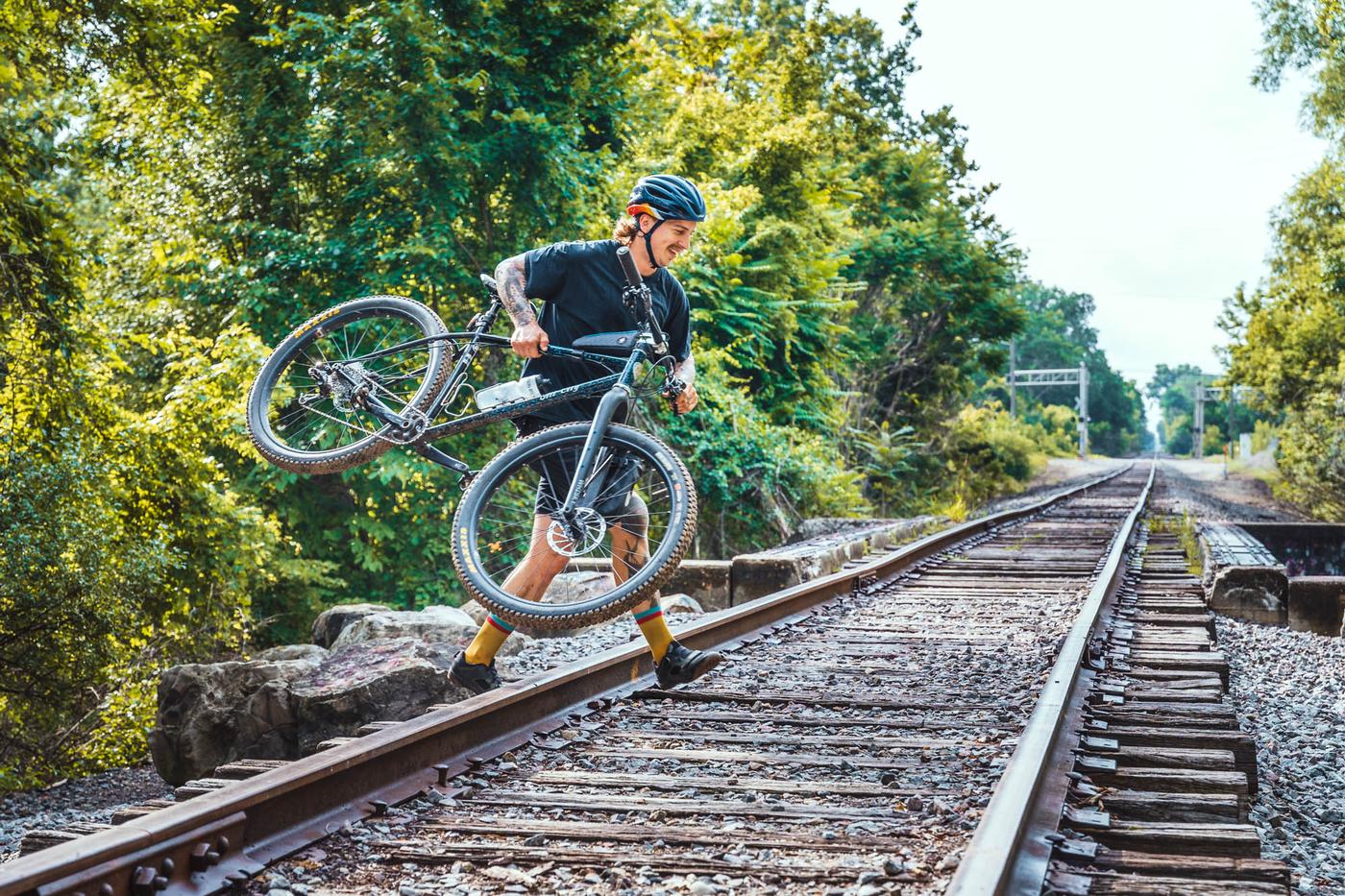 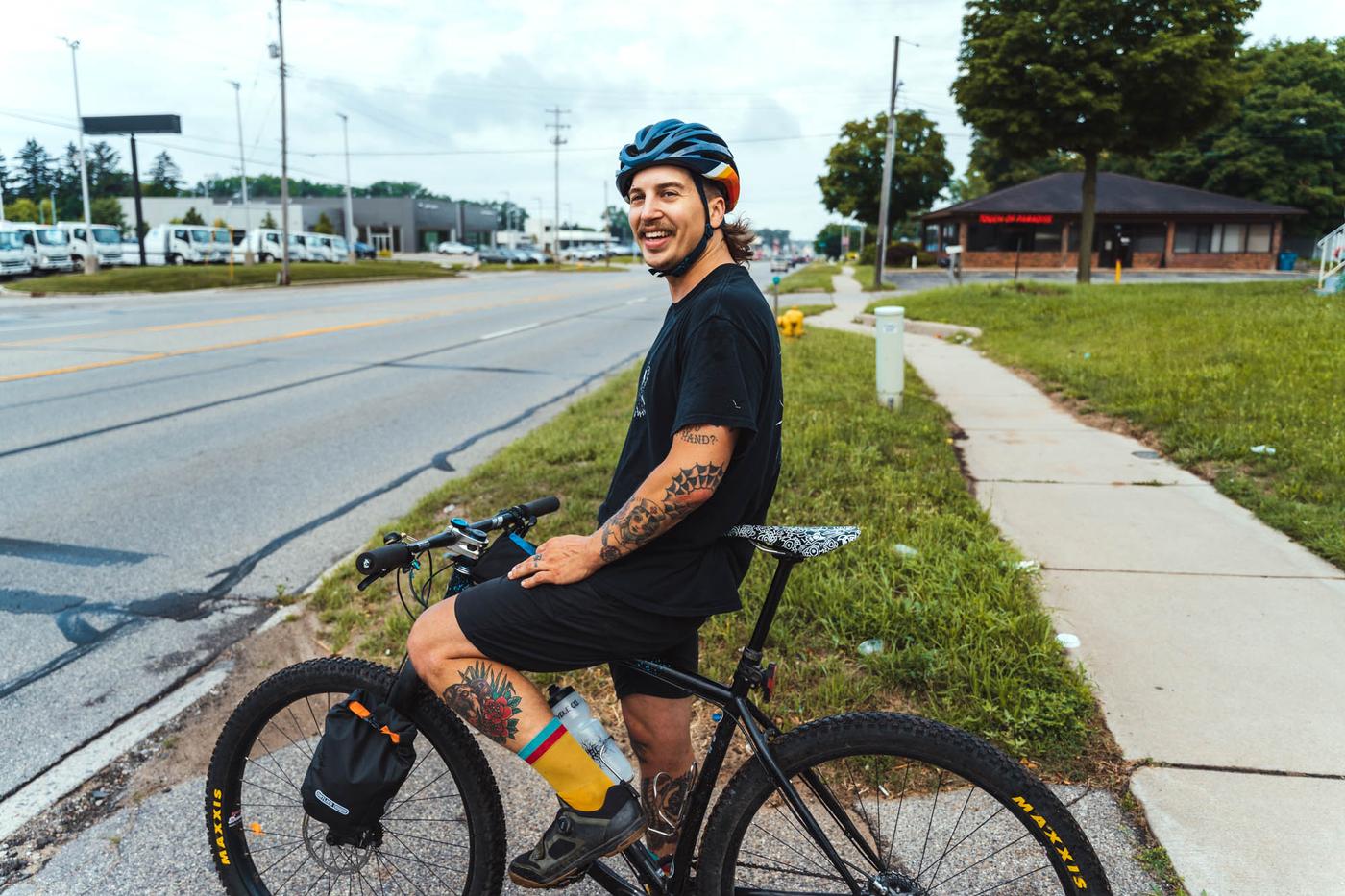 We then took the scenic route back north through downtown to the bike shop. Riding through dense west Michigan forests is somewhat disorienting and each time we’d pop out on a road or connector path I’d yell over to Mitch trying to figure out our location, asking clarifying geographical questions like: “Hey, is this really 28th Street?! We’re going into Ken-O-Sha?! How’d we get back into downtown?!” It was such a surreal way to experience locations I remember frequenting in my younger days, only from a completely different perspective. This might have been the most fun ride of my trip because of how unexpected it was. 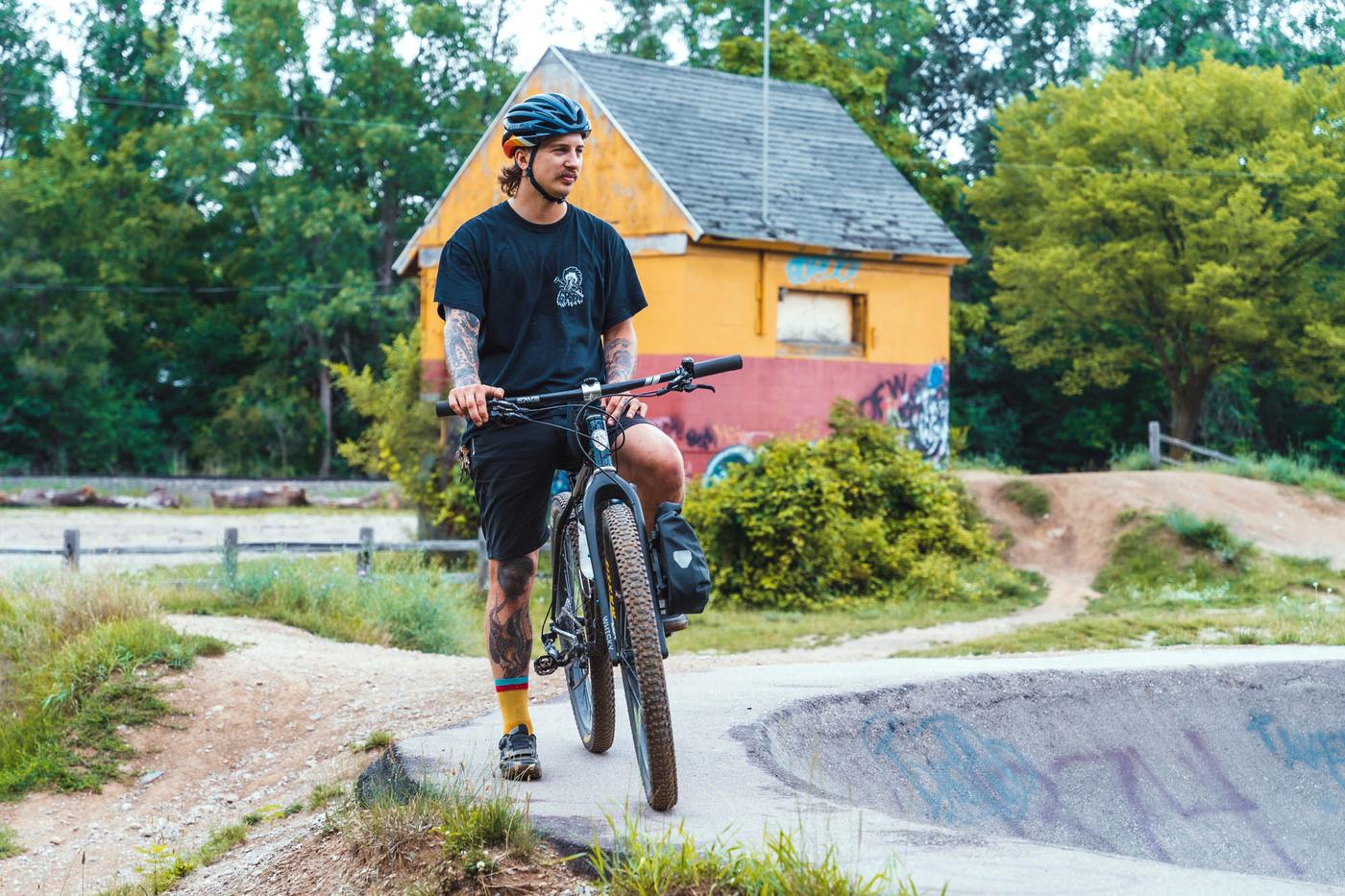 Mitch’s shop, GRBCo, is the current incarnation of a legacy establishment in Grand Rapids. Formerly known as Ada Bike Shop, there are two locations (Fulton Street and the original in Ada). They cater to a wide variety of cycling persuasions – from road to mountain to pedicab – and were very welcoming. 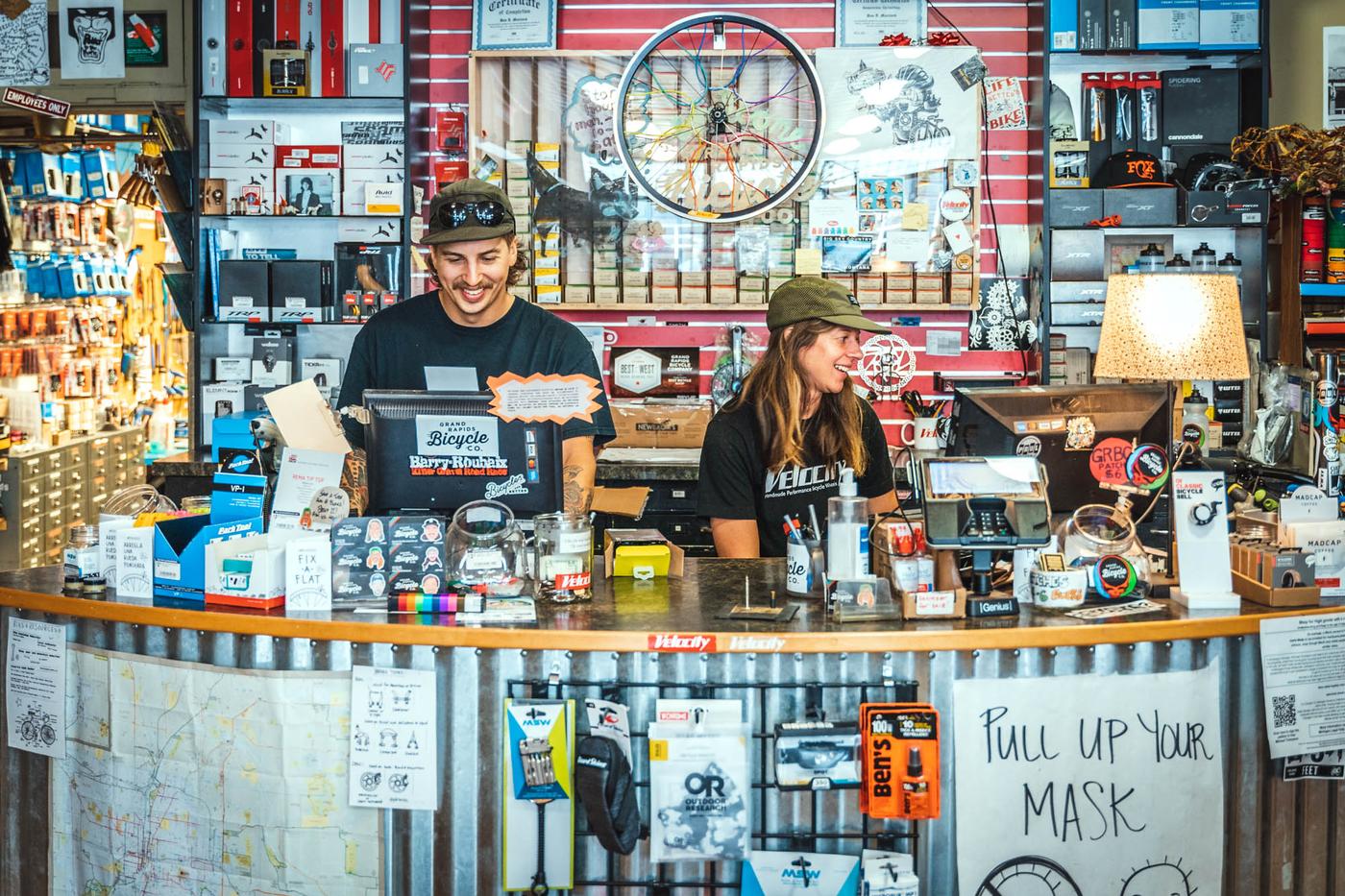 Hanging out in the Fulton St location felt like wrapping up in a warm blanket after being out in a rainstorm for too long. The two mechanics working that day, Dan and James, and Emily up front, were super welcoming. I don’t remember exactly what they were talking about, but they held back no sarcasm just because an interloper with a camera was poking around in their space. 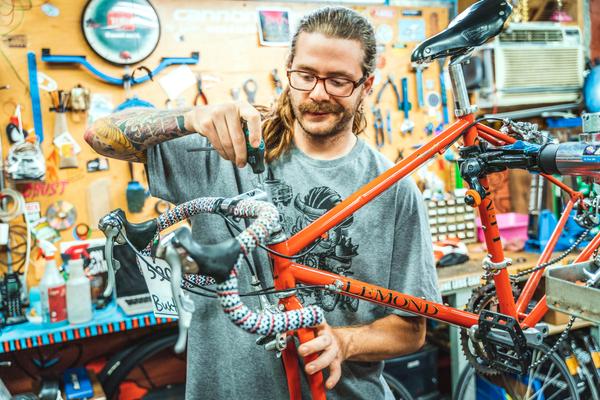 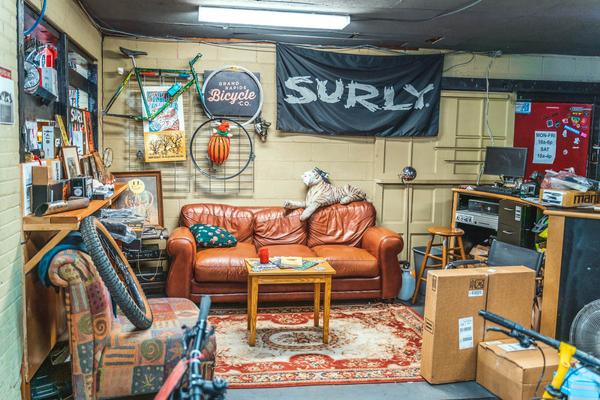 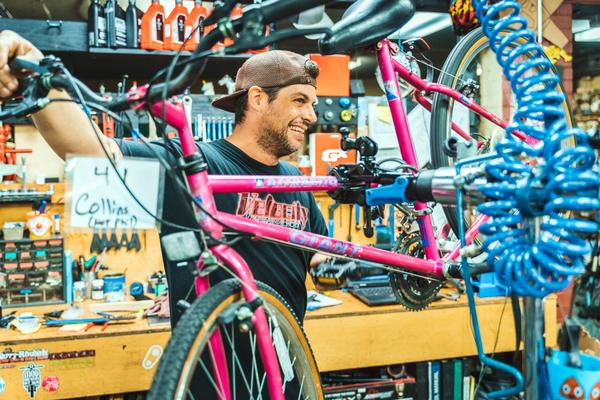 What the shop might have been lacking in available bike inventory at the time was certainly made up for with abundant cycling ephemera and custom details to observe. From the business card caricatures and handwritten message boards to the flyers from past events and vintage frames adorning walls, the shop space exudes a strong sense of creativity and connection to the local community. When Mitch and I got back to the shop from riding, I was able to quickly document his All-City Electric Queen before the predicted rainstorm opened up on us. 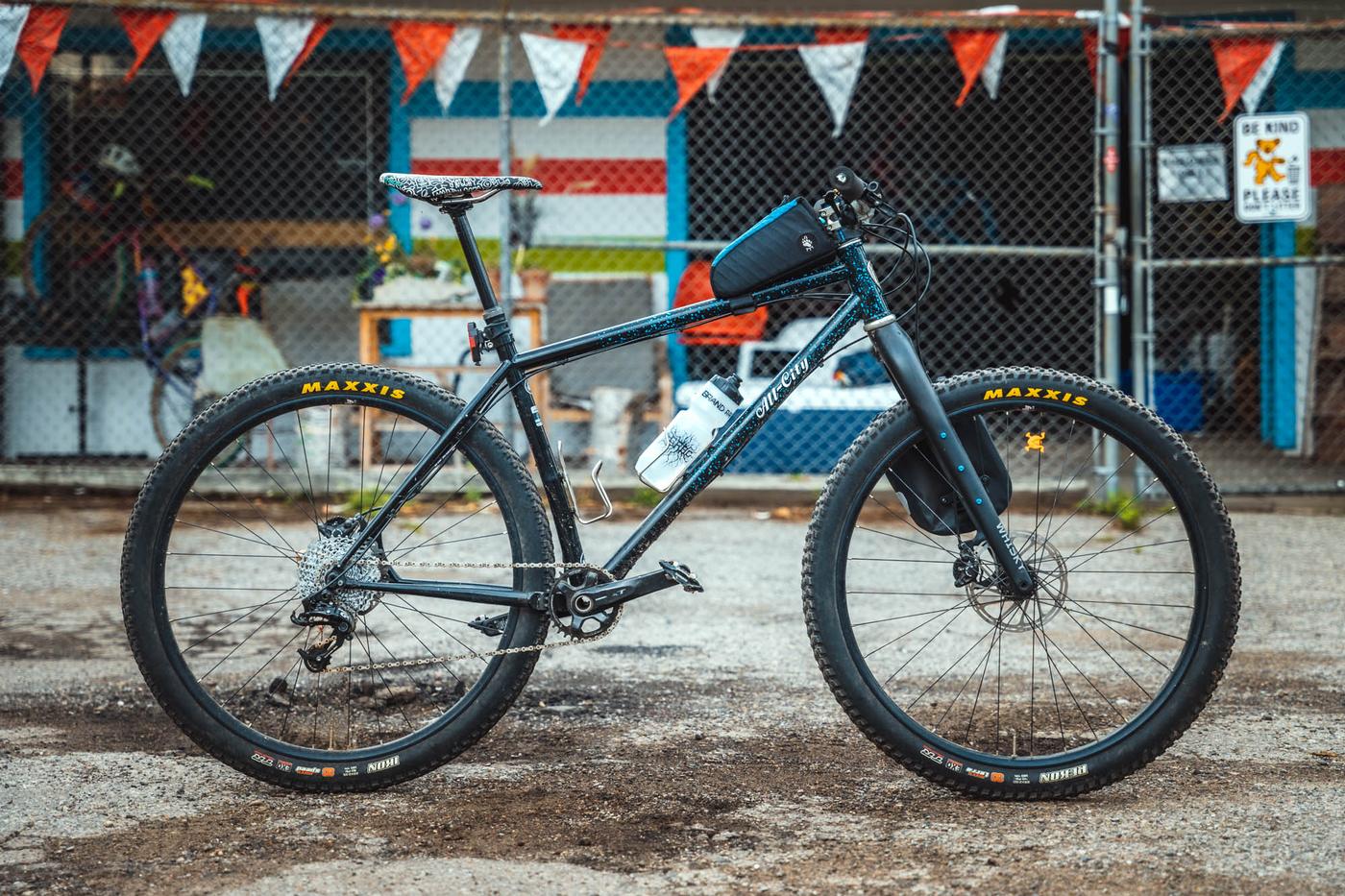 I love bikes like Mitch’s that have clearly seen a few different iterations throughout their lifespan and, while possibly not yet in their final evolved form, function exactly as needed in a variety of applications. In the case of Mitch’s Electric Queen, it’s a comfortable commuter that can also tag on some healthy trail miles before or after work. 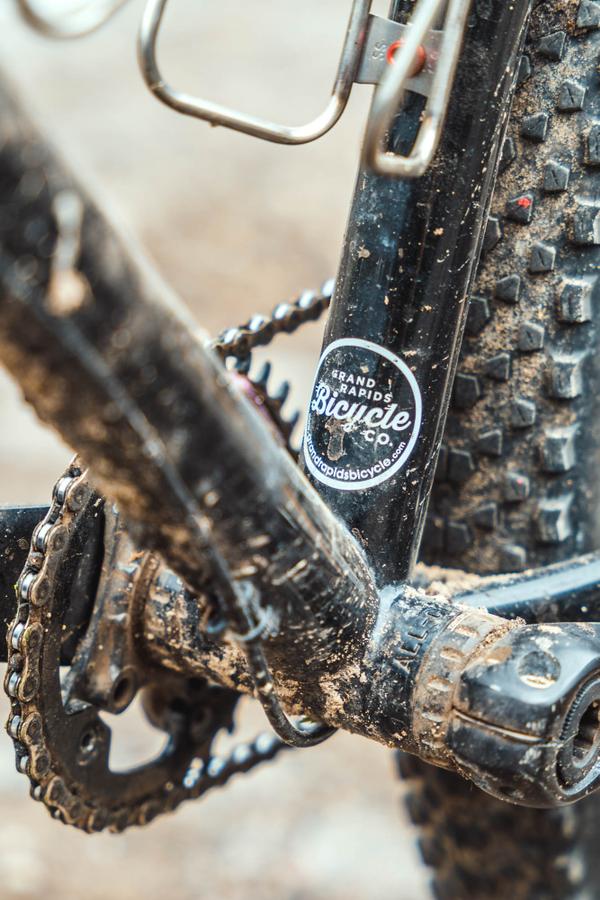 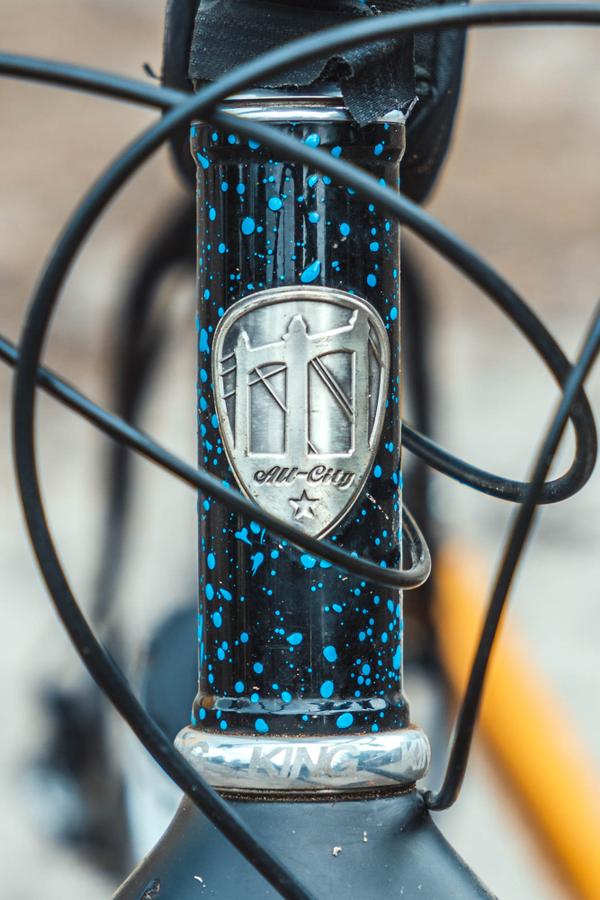 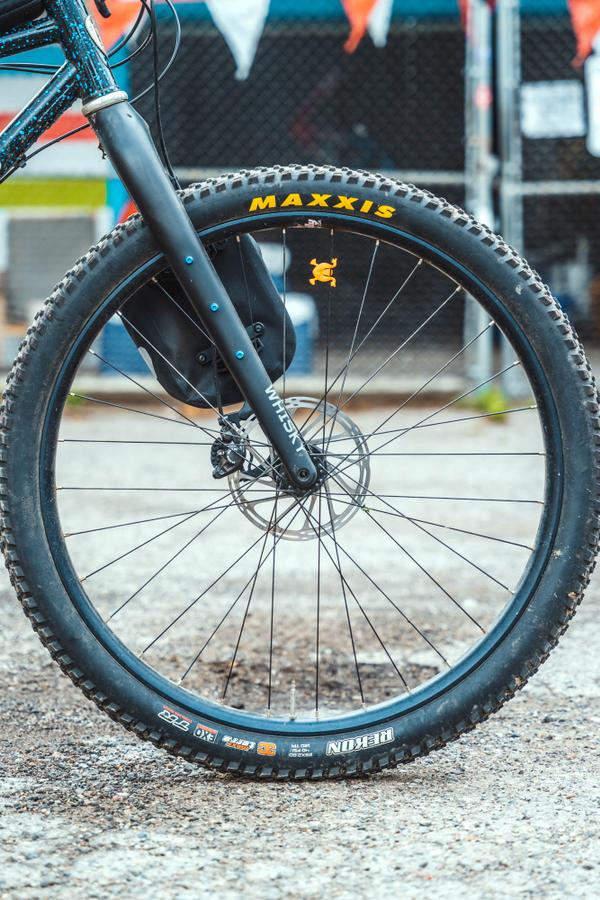 Mitch mentioned it used to be set up as a single speed but he got sick of fiddling with an eccentric bottom bracket. Instead, he went with a tried and true Sram GX 10-speed drivetrain that has plenty of range to get him around the hills of the city. Repping his hometown aluminum bending company, the 29” Velocity Duallys fill out the 2.6 Rekon tire he has up front in addition to the rear Ikon. 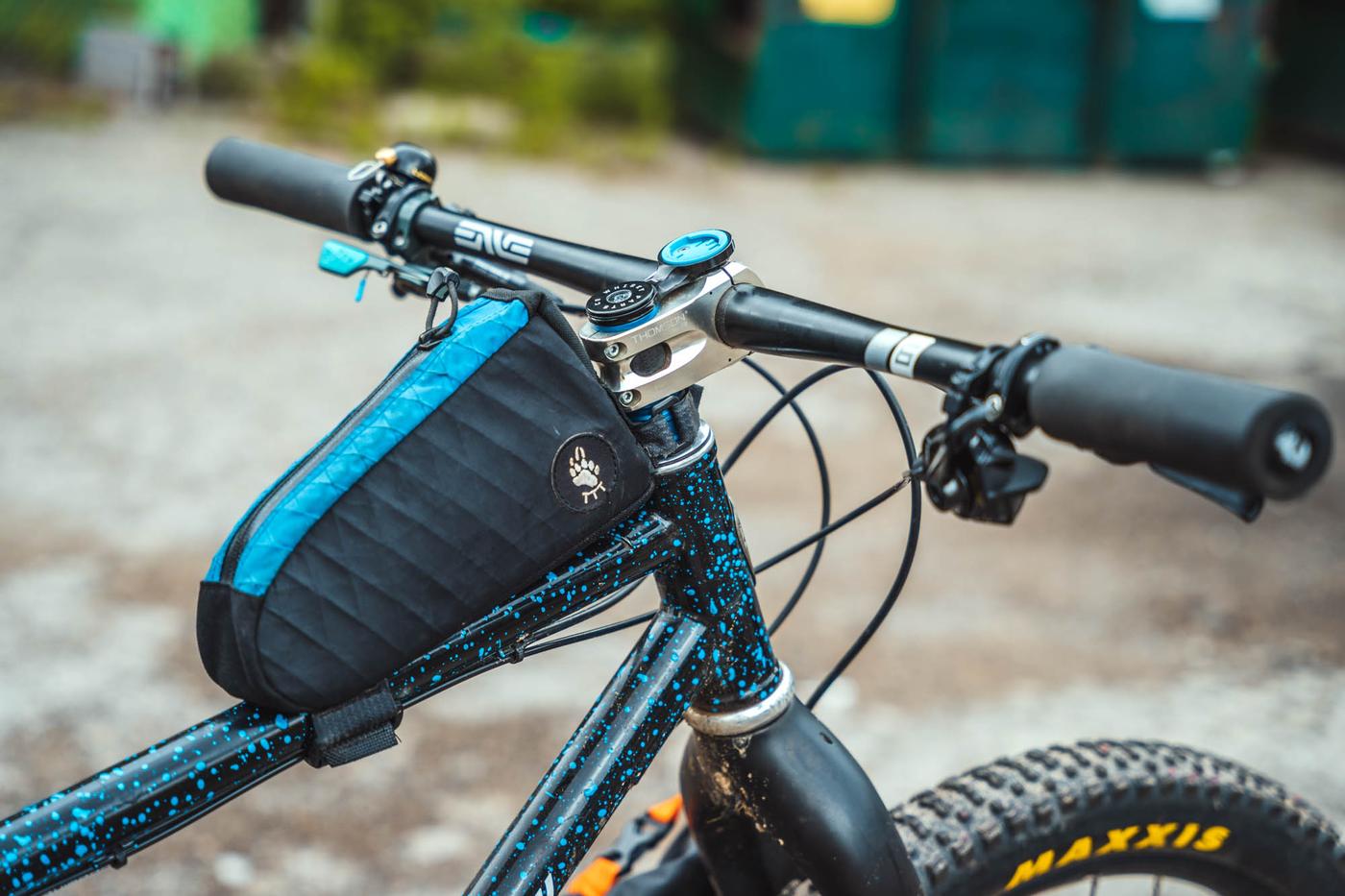 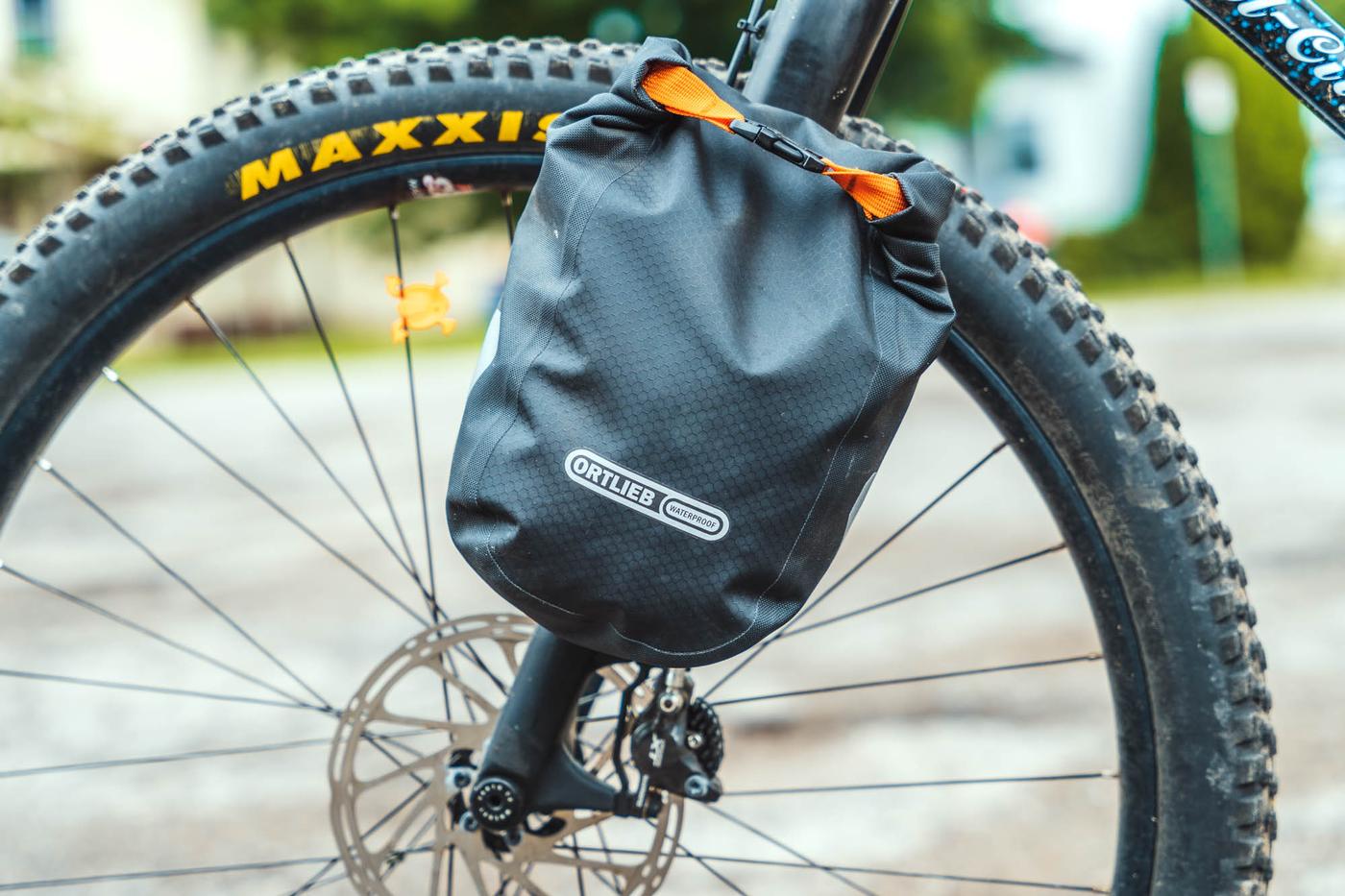 I suspect that with the addition of some fenders, and maybe some studded tires, it’s a great option to get around during the cold months of winter in Grand Rapids.