Three years ago when I was tossing around the idea of a long-term bikepacking trip, I had two primary options on my mind. There was Peru and the Andes of South America, which I had a tiny bit of familiarity with given my short previous stint there, and then the wild card… Kyrgyzstan. A small former Soviet country dotted with lakes and covered in glaciated peaks as tall as 24,400 feet. With a rich nomadic history due to its place on the ancient Silk Road trading route that passed through from neighboring China, it makes for an ideal locale to load up your bike and get lost in the mountains. So even while I was still in Patagonia, I was scouring maps of Central Asia for the possibilities that awaited in the faraway lands of the Kyrgyz Republic. While some who don’t have a familiarity with the area may pause at the very sight of “…stan” at the end of a country’s name, the people of Kyrgyzstan are known by those who have visited to be some of the most friendly and hospitable in the world. More than a couple of times when I would tell people where I was headed next, I’d get a raised eyebrow in return with something along the lines of “Isn’t it dangerous? Don’t they hate us there?” as a response. It’s a common misconception in an age where the things you see in the news all seem to be trying to make you fear something or someone. Throughout the coming months, I’ll be sharing stories of the mountains and culture of Kyrgyzstan and beyond to hopefully help further demystify some lingering misconceptions from a part of the world that is rightfully poised for a major boom in tourism. Three weeks went by from the day that I left South America to the day I took off toward the Kyrgyz capital city of Bishkek. While that seems like a lot of time, after so long on the road, a lot of things had to get done to prepare for another open-ended trip, so the three weeks back in the States felt closer to three days. For this leg, I was swapping my bike for a Rohloff equipped Tumbleweed Prospector along with a host of other equipment changes, which I’ll go into detail on in a future post. One other change for this trip is that I’m traveling with my friend Chrissa, from Greece, whom you might recognize from my posts in the Puna of Northern Argentina. After a 15 month tour through Europe and South America on skinny tires, she’s crossed over to the dark side to enjoy a life of rough roads on big squishy ones. One bi-product of Kyrgyzstan’s history in the USSR is how a city like Bishkek has its local culture and history covered by a layer of Soviet-era drab. While the local bazaar is teeming with interesting folks, the feel and architecture of Bishkek show the strong Soviet influence that this country was under for so long, with very little existing from the times before Lenin. There’s a quiet calmness to the city that is rare for a place that is home to more than a million people. This characteristic shift was immediately apparent after coming from South America, where the people are often very outgoing and vocal.

Leaving the city is where the culture of this country truly shines through, however. For millennia, the people that have called this place home have been moving across the land to the area that suited their needs and the needs of their animals best, depending on the season. The yurts they reside in throughout the valleys of these mountains can be assembled or disassembled in a matter of a day or two, so they’re always ready to move when necessary. To start our trip, we’d witness this first-hand on the trail over the mighty Shamshy pass. This is the perfect time of year for the shepherds to start migrating their herds to the upper valleys as the snow is just starting to melt away from the upper slopes of the mountain passes, and the temperatures are skyrocketing in the lowlands. Tackling a climb that spans 9,000 vertical feet, with many tricky river crossings at this time of the year, and multiple days of hike-a-biking was maaaaybe just a bit ambitious for the first “riding” upon our arrival, but that’s where we found ourselves… Halfway up the mountain, with the pedals removed from our bikes to prevent bloody-shins, and nowhere to go but up. Thankfully, the excitement of a new place to explore and mesmerizing scenery to bogle our minds kept us inching skyward.

As we were approaching the final pitch to the summit, a group of shepherds were taking hundreds of horses over the pass for their yearly migration. Trying to get around a language barrier far taller than I experienced in South America, one shepherd used body language and hand gestures to indicate that we needed to hurry if we wanted to make it over today. “Go! Go!” he insisted, as he pointed toward the snow-covered pass. The clouds were closing in, and getting to the top would likely take longer than we thought. This meant we might be descending the other side of the pass looking for a campsite in the dark. The friendly shepherd handed us a can of mystery fish in tomato sauce and wished us luck as his herd made quick work of the trail we’d have to spend a couple of hours grinding away at. Luckily for us, with snow on the top of the primary trail, the horses blazed a new one nearby so we were able to trace their tracks, pushing up a mixed bag of 30% grades on loose stones and snow-melt softened soil that was doing its best to slide us back to the bottom with every push up.

With a bit of teamwork, we finally got to the top and found a chilly spot to camp just below the pass on the other side. Because of Kyrgyzstan’s long-storied nomadic tradition, it is an extremely camping-friendly country. The shepherds welcome you to the land that they’re living on as if you have as much of a right to be there as they do. When they approach the tent and you’re inside, they always keep a respectful distance and give some sort of audible cue to indicate their presence, without just popping their heads in unannounced (which can be typical in other countries). Often the locals like to bring around their kids or a small gift (horse milk, yogurt, bread, candy, etc) to welcome you and ask a few questions about your background and your trip. Combine this next-level hospitality with grassy fields that roll on forever and rivers that flow from every snowy peak and you’ve got the makings of a wild-campers paradise. A breath of fresh air after the endless web of fences and private land that complicated matters in Patagonia. 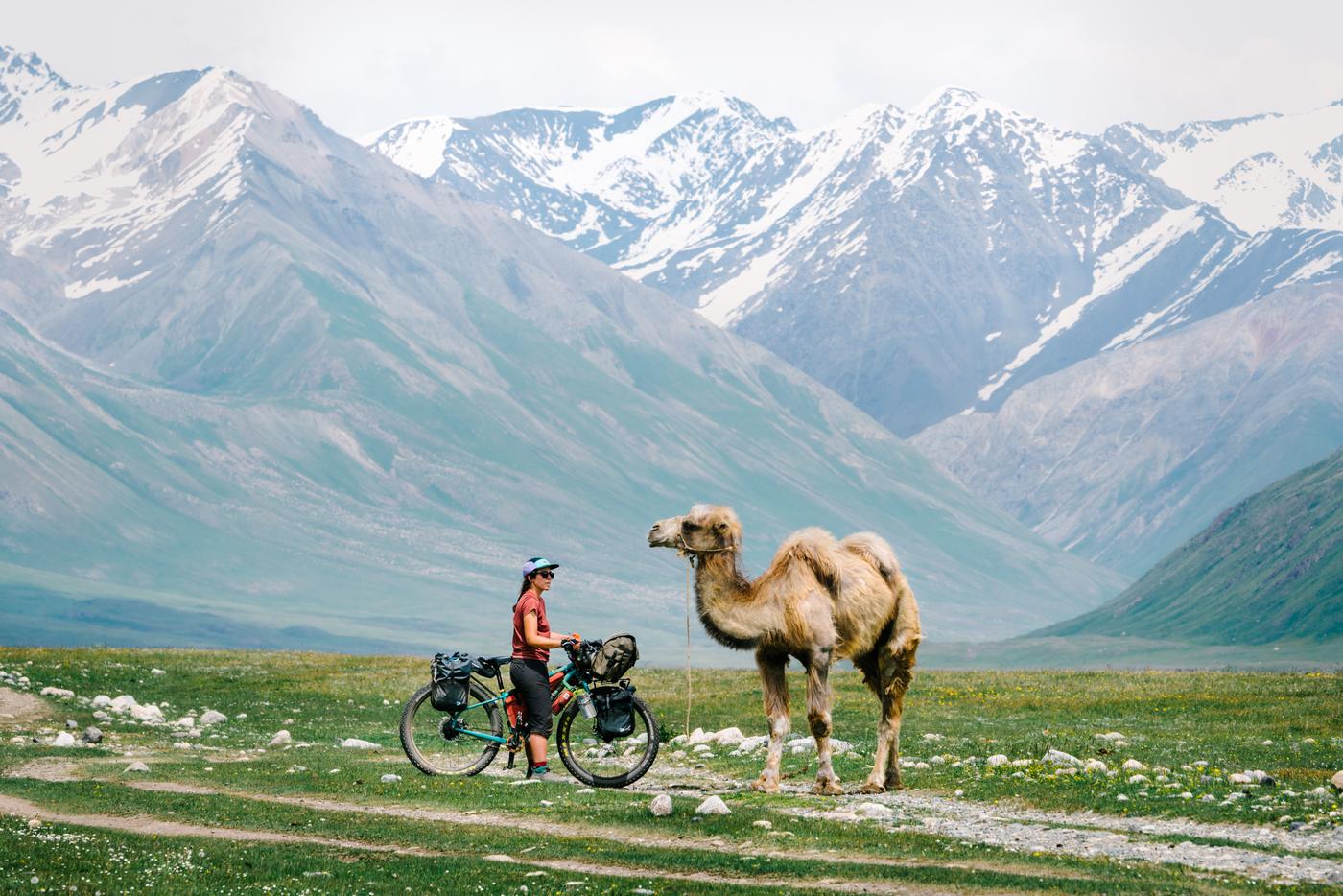 Excited to finally hit some grassy tracks that resembled a road, we pushed on, slowly making our way east toward Tosor pass. Along the way, we were surprised at just how quiet the roads were. At one point we’d seen seemingly a million animals roaming freely through open valleys and only the occasional human, but in the distance on the road we spotted something… large. Very large. What was it? We got a little closer… “Is that?”… “Is that a camel?”. We were not exactly expecting to see a camel in this area, and there were no humans around, so we approached with caution. This thing truly was gigantic. It also took quite a liking to Chrissa. She stood by while the dual-humped behemoth casually examined her and the bike for a couple of minutes before I carefully crept closer and scared it off (what else is new!).

After a couple of days riding through an idyllic valley along a 4×4 track, we reached the top of Tosor pass and stared down a descent of more than 7,000ft, where warm weather, cold beverages, and civilization awaited our arrival below.

See my route at Ride with GPS!