After South Africa, I realized two things. The first being my knee injury will have me off the bike for a few weeks and the second; it’s finally the perfect time for the desert. Rather than stewing at home, unable to ride and constantly being surrounded by the thing that I can’t do right now – riding bikes – I decided that a trip to the Mojave was in order. A nonprofit artist organization, the High Desert Test Sites, was doing their annual symposium in the Joshua Tree area. Cari has worked with them in the past, so I thought it’d be an awesome excuse to get out to the Mojave for a short trip.

The problem is, Joshua Tree this time of year is a zoo, so finding a camping spot on the weekend is a challenge. My rough plan was to drive out to the Cady Mountains, camp, wake up to look for Big Horn sheep and explore the slot canyons, then drive to Joshua Tree for the festivities. We’d then bail out back to the Mojave and explore some more areas I’ve got saved for just such an occasion.

Cari had just gotten back from a two-week trip to the deserts of Nevada and New Mexico on a rock hounding trip called “Notable Holes.” This included lots of bumpy desert road driving, sleeping in the back of her truck and eating mildly unhealthy road trip options. To say she was less than enthused to get back on the road was an understatement. Luckily, she loves me and saw how I was going crazy just sitting at home, so we packed up the truck and headed out for the Mojave.

As we left the San Gabriel Valley, the wind hit. 40-60mph gusts made driving on the highway a mental workout. Luckily, our destination wasn’t too far away, so we exited for a cut-through, via the Cady Mountains to Crucero Road. It was already dark at this point and we were getting sleepy. Following a winding road, under a network of power lines, we scoured the hillsides for a flat place to camp for the night. Suddenly, I had the sense to pull into a road that cut off to the left and to our surprise, just off the road was a flat – enough – space. We spent the night in the roof top tent, battling 60 mph gusts and to say I was relieved to see the sunrise was an understatement. As I popped out of the tent, I looked up on the hillsides to see something strange. 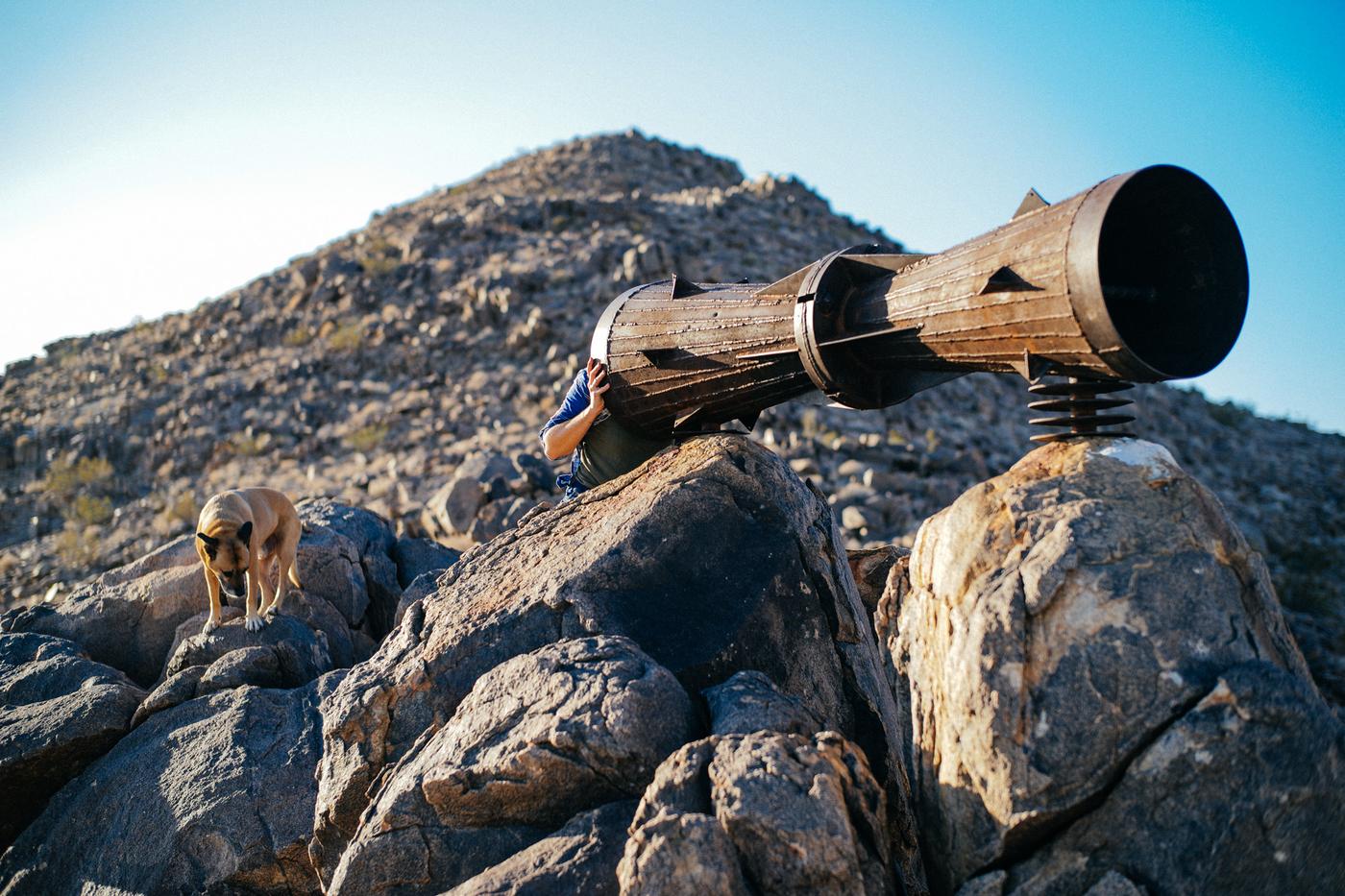 This object is one of the many man-made mysteries of the Mojave. One theory is that it’s from Mojave Desert Megaphone Experiment, 1932. Apparently, these “listening devices” would be constructed in a chain, allowing for desert communication without the aid of electronic devices. Or it could be a shell of something more intricate like a hand-cranked sired. The design and location of this device ties in with the old Tonopah and Tidewater Railroad that used to run in this area. If you’re as puzzled by this as we were, head over to In the Desert to read more about it. What’s a bigger mystery is what made me want to turn off our road, onto a random spur, in the middle of the night? I had never heard of this Megaphone before, to make things even more strange. Desert luck? Lord knows we’d need more of that! 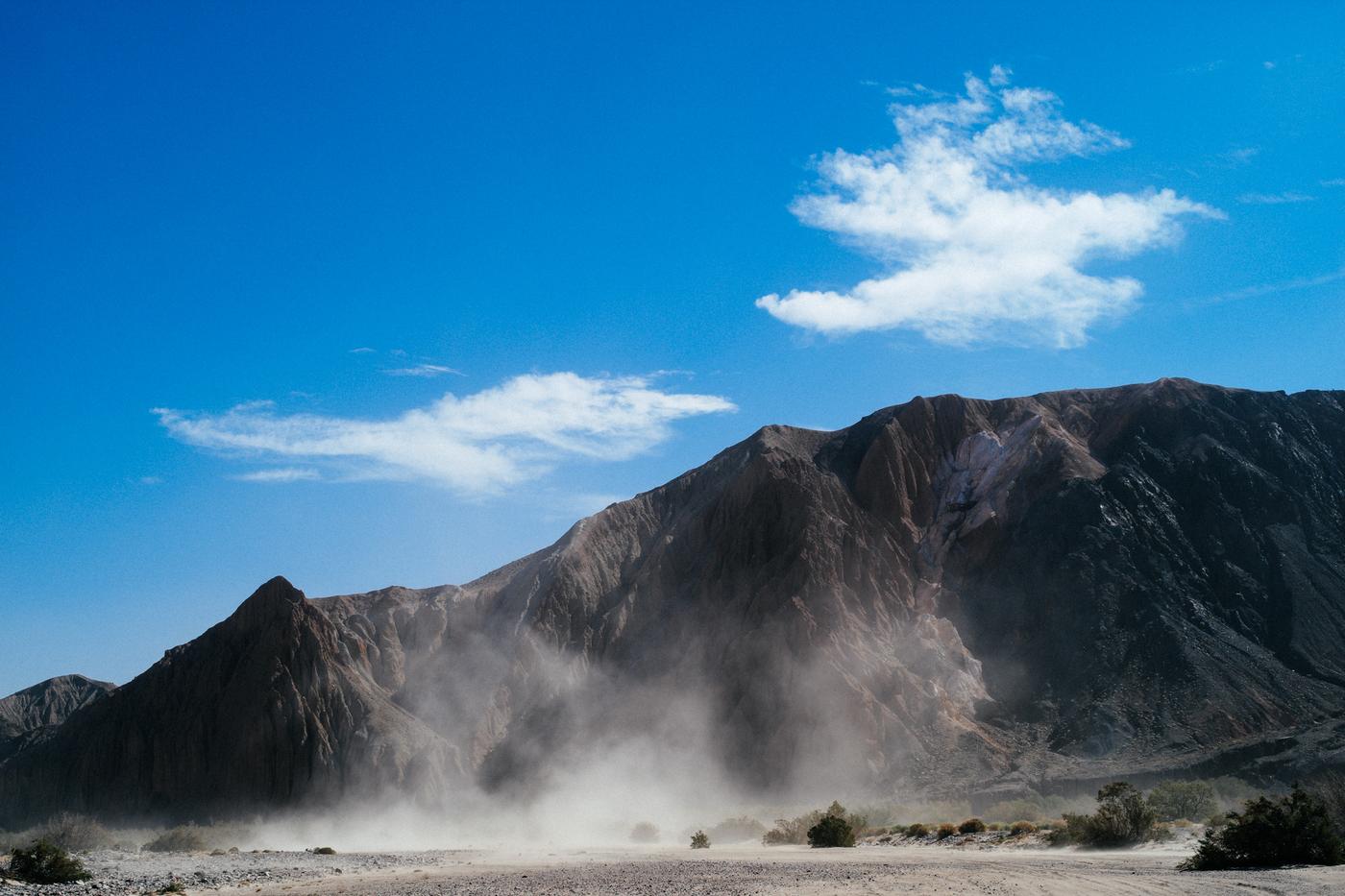 Just as soon as we scrambled back to the truck, the wind picked up with ferocity. It was so bad that we didn’t want to leave the car and the idea of exploring slot canyons was quickly quelled. “Fuck it,” Cari exclaimed, “let’s go to Death Valley.” I had mentioned to her that I wanted to explore the North Eastern corner of Death Valley this coming week and that I was perfectly comfortable doing this on my own since she wouldn’t be able to go.

Ok then, off to Death Valley… We were close to the Old Mojave Road, so we made a b-line towards Highway 15, via this old route. Then we came to the river crossing. Now, my truck sits pretty high and I’m comfortable doing water crossings, even without the aid of a snorkel. As long as your airbox is above the water, you’re ok. The Land Cruiser’s airbox is up high, higher than my seat, so I was ready to cross this three-foot crossing. Then we saw it. A Ford F350 flatbed construction truck, stalled out in the middle of the crossing, unable to move. The engine was flooded. I sussed the situation, talked to the guys, who told me their friend, a BLM agent, was coming to tow them out. I offered to snatch strap them out, but they assured me it’d be ok. We snuck by them, through the water and were on our way. 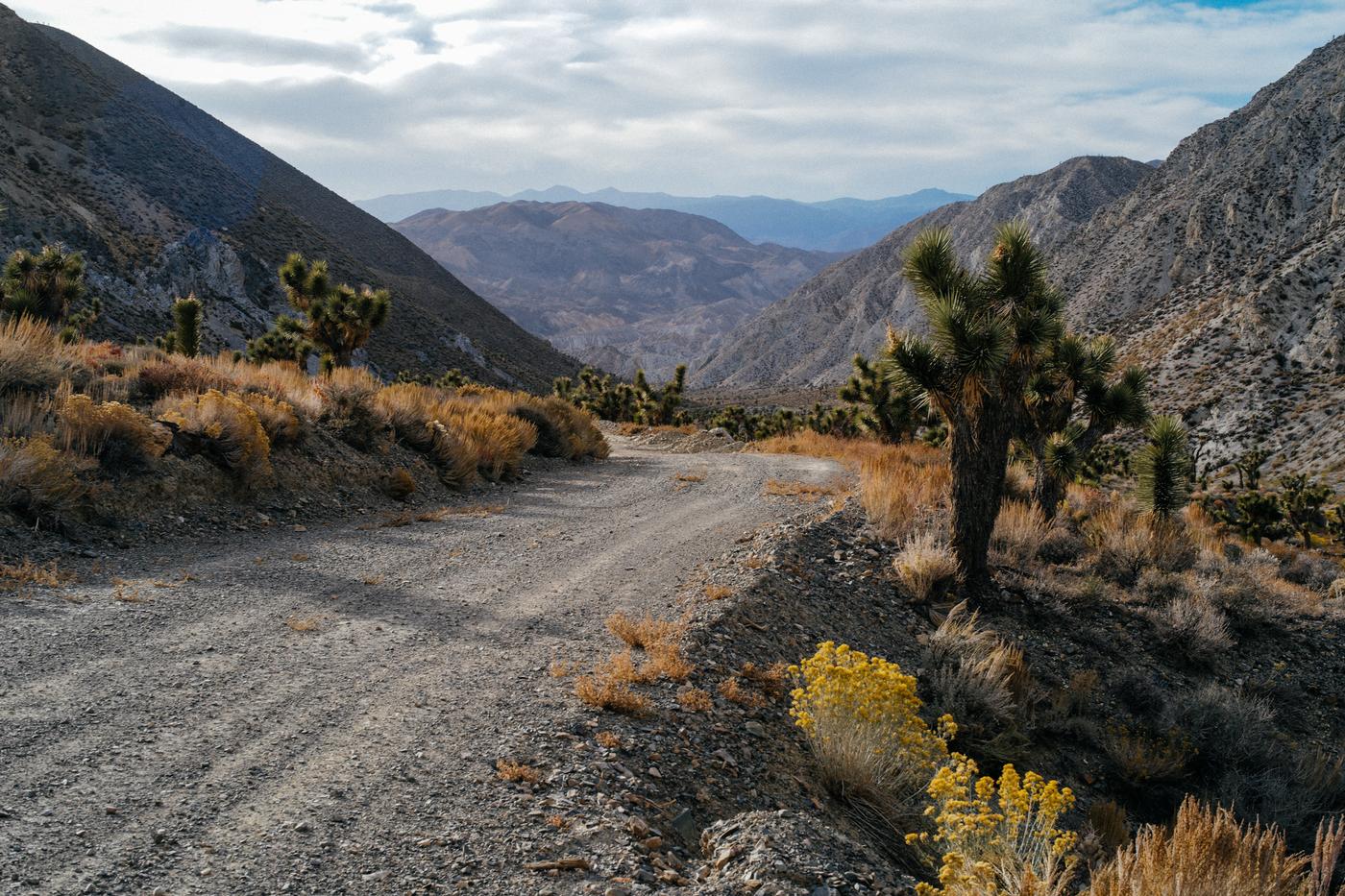 As we drove northeast, we re-routed through Nevada, along the 95 before skirting Death Valley and dropping into the park via a road called Pigeon Springs Road in Nevada, en route to the Eureka Dunes. Our next road was Willow Creek, and it blew our minds. I’ve never seen such lush, green flora growing in the desert and might I remind you, we were in the Mojave during one of the “greenest springs in recent memory” – so said the rangers we spoke to in March. Willow Creek was a mix of piñon, juniper, cholla, and Joshua Trees, all growing along the hillsides and mountains, mixed in with cinder and lava flow. 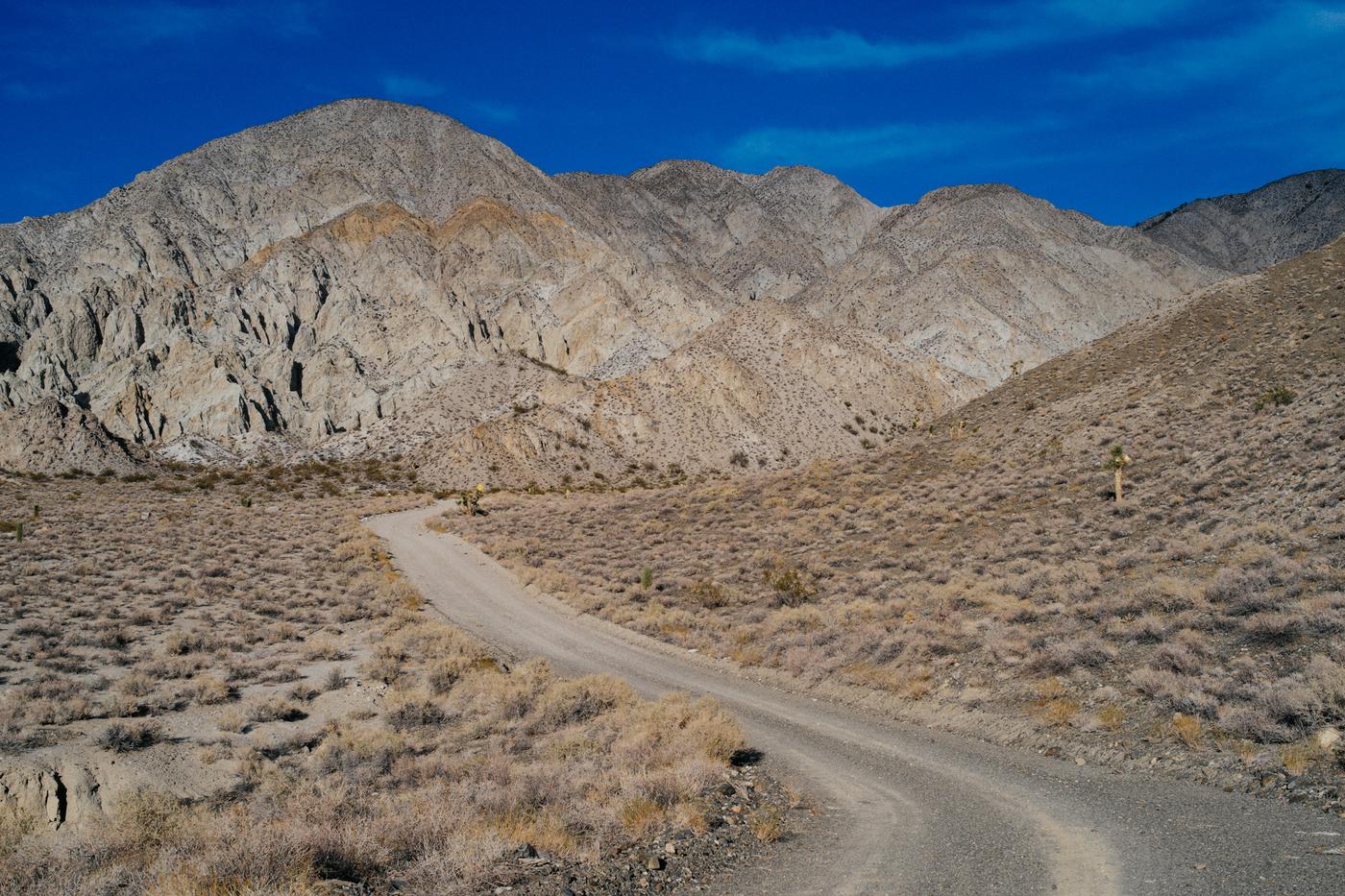 It was amazing, but as soon as we turned into the National Park, the scenery quickly changed. Pyroclastic formations, cinder cones, and lava flow cascaded down the hills and extended out to the distance. The Last Chance Range is one of the most beautiful in the park and they left both of us in awe. Even Max was whimpering with glee. Or perhaps it was the thirty some odd mule deer dancing off the road and into the distance… 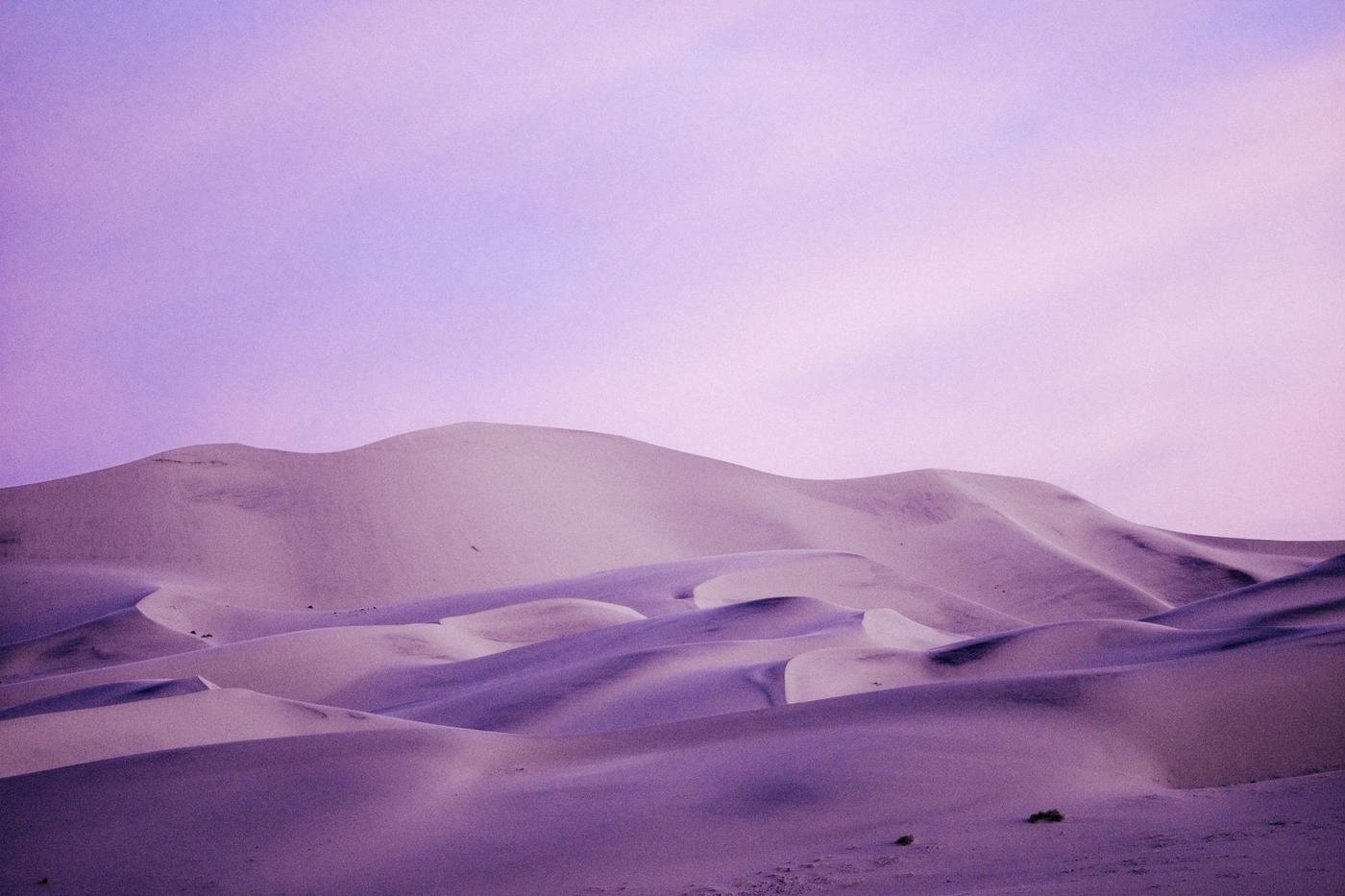 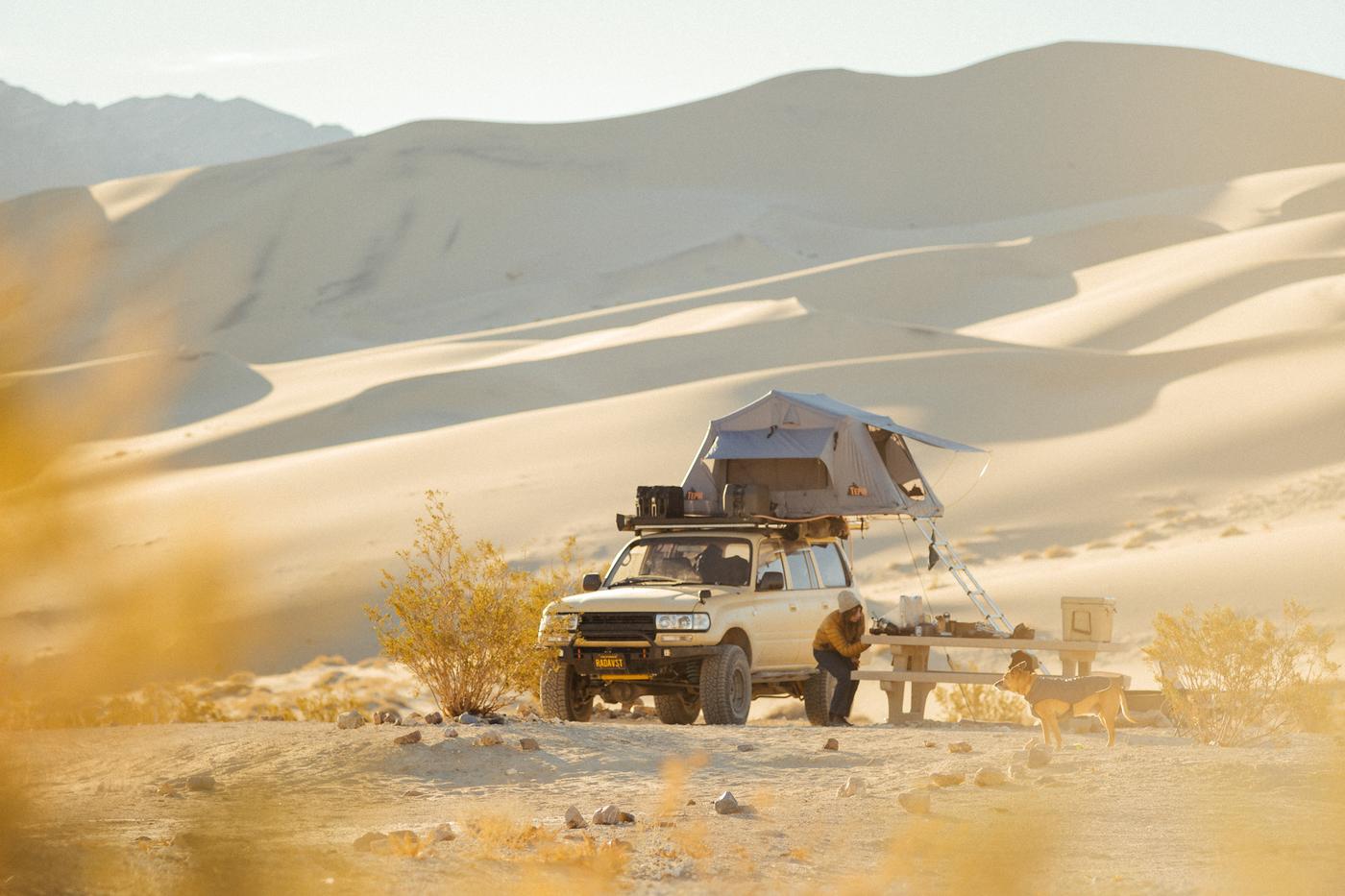 There are lots of “dry camping” spots at the base of the dunes, and we were one of three vehicles there. On a Saturday! Death Valley can be a zoo this time of year, but I’m always amazed at how alone you can feel in the backcountry. Compared to the previous evening’s sleep schedule, we were amazed at how still the air was and immediately passed out, listening to coyotes yip in the distance. Max was unimpressed. Waking up to the sun breaking over the Last Chance Range, and watching it kiss these beautiful dunes was magical. After cooking up a quick breakfast, we began to hike up what we thought was the highest point. Only after reaching the front face’s summit were we able to see the 700′ proud peak. Our minds were collectively blown. Max was unimpressed. A bit tired, but unimpressed. Knowing we had a long day ahead of us, we sprinted straight down the dunes and back to the truck. I aired down the tires considerably, knowing the road ahead was rough. Our plan was to take on Dedeckera Canyon, to Steel Pass, before exiting the Park via the Northern strip of Saline Valley Road and down to Big Pine. All in all, this was 50 miles of rough and rugged terrain. Now, Dedeckera Canyon is by no means a standard Death Valley road. You need a high clearance, 4×4, BUT it can be bone stock. I’m talking straight off the lot Rav 4 stock. You don’t need some rock crawler, just some good wits and a good spotter in a few tight spots. We had so much fun creeping up these waterfalls that we didn’t shoot any photos, save for this one. As you exit Dedeckera, Steel Pass’ rocky terrain awaits. It’s a long descent down to Saline Valley, passed the shit-show tweaker party scene that is the Saline Valley Warm Springs – on the weekends – and out of the park, via a 20 mile climb up and over the Waucoba Range. This pass is low-range driving. It’s steep, loose and can be impassable in the winter due to ice and snow. It was slow moving for us, with a loaded down truck, stopping for photos and pee breaks. Max, once again, was unimpressed. Almost 6 hours from the time we left camp, we hit Death Valley Road, a paved, 6% downhill to the 168 and the lovely Owens Valley. After driving rough and rugged byways, this pavement was a godsend. As we dropped into Big Pine, one of my favorite trees in the valley was illuminated by the setting sun and I knew that our trip had come to an end. If you have any questions about our trip, or our route, holler in the comments!