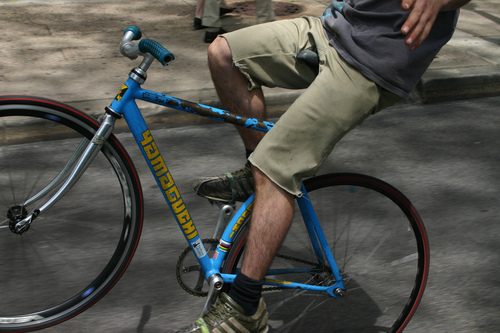 This dialog sprung up in last night’s Fixed Freestyle Scene Report: November 2007 comments section. Turns out Tom’s 180 to fakie was Summer of 2006 in Philly. Around that same time, Jason was turning some pretty impressive freestyle moves on his Yamaguchi track bike. No handed wheelies. This is long before Keo or anyone on the West Coast was doing them. At that time in Philly, Jason was also doing roll-outs and ripping hard on his track bike. Back then, you had a lotta time to kill as a working messenger.

Solid. This has always been one of my favorite photos from Wilis. Check the rest out on Pursuit Magazine’s Flickr archives here. Blast you Tracko for sniping this shit from me!