Between my first attempt at the Land Run 100 in 2017 and this year’s event a lot had changed, I hit a bout with depression, a tough one, I gained back every pound I lost trying to fit in that kit, and I finally broke away from an extremely toxic work environment.  Two negatives make a positive right? The only hard date I had on my calendar this year was Land Run, and everything inside of me was hoping for rain, cause something about that dirt, that transitions to mud, that makes you forget the world around you can change you. Really.  Leading up to the event I hadn’t ridden as much as I should have, lots of trainer rides, a few fatbike snow jaunts (when it wasn’t a sheet of ice here) and some fire-tower climbs, but I had one shakedown ride on a new bike before I boxed it to ship.

I had a lot of uncertainties, I really didn’t know where I was fitness wise, what’s the course like, could I even ride 100 miles still?  There’s that self-doubt again, I had to tame my emotions and thoughts and venture on, cause the flights were booked and I had hope that once landed all of my inhibitions would be calmed.

Off the plane and into Stillwater and the warmest welcome I’ve ever experienced.  Good thing, cause it was 45 degrees! At least I packed well this time. Things were starting to come together as I learned from mistakes. In the days prior to the cannon fire, I had such good hangs and conversation that I forgot I would even have to attempt to ride on Saturday. I got caught up in the events prior, but something was always in the back of my head, would the weather flip overnight again? 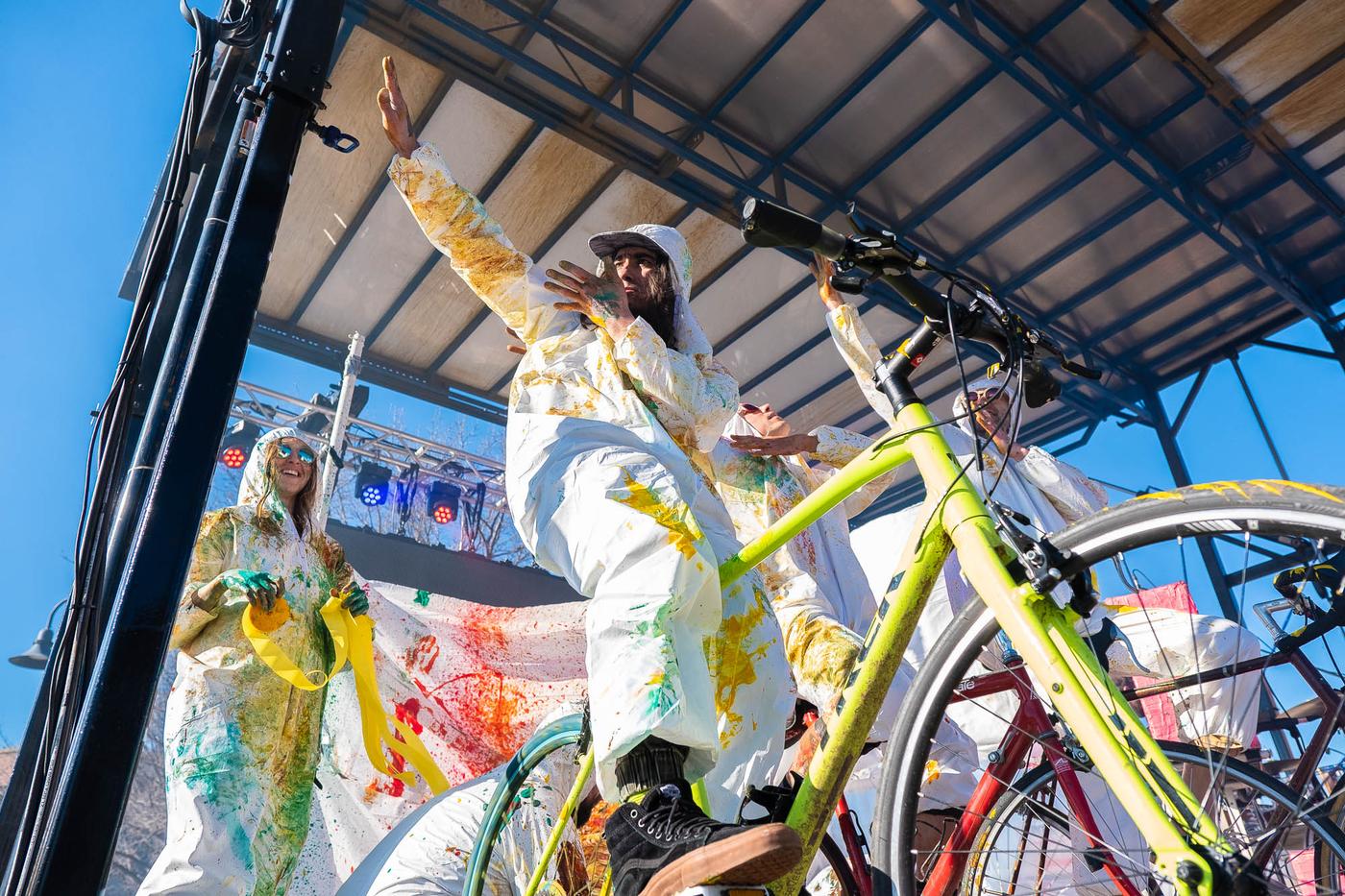 Friday night after packing my food, waters, and layers I stayed awake so long it was Saturday morning, my mind racing, hoping that dawn would come so I could get ready, get to the line and get rolling. Still no rain, I was finally able to shut my eyes.

Dawn came quickly, barely awake I made it to the line in time.  Stashing my bike back near the stage and walked forward to snag some pictures of the start and all the wildness that was about to happen.  Cannon fire rang as Bobby started the race, and after shooting a few pictures I made a dash back to get my bike and try and find the group I was hopefully going to ride most of the day with.  On the way out of town, I set my GPS route up so that I wouldn’t get lost and prepped myself for a long day in the saddle, alone.  Shortly into the route I saw a group of people helping a fellow rider and I slowed but everything was being taken care of I was told.  I continued on, picked up the pace and tried to catch Kyle, Liz, Matt, and Nam or so I thought, my mind was scattered from my mistakes at the rollout.  Eventually, around mile 10 I caught Matt and Nam, Matt had a lil’ run-in with Reeen Hers, and was supple side up for a moment after a quick pump we rolled down the road a bit before a second flat, this time I gave Matt a tube and he told me to roll on and catch the group so I left and rolled solo for a little while, passing people along the way, feeling blood flowing through my legs and feeling alive. Soon I made it to Brethern Hill, the steepest portion of the course, after cresting that hill I felt great and my shoe was intact, not a terrible start to the day.  Once the gravel gave way to dirt I thought to myself how much I missed these roads, the rolling landscape and most importantly the dirt. Sure the gravel is fun, but the dirt is unlike anything else I’ve experienced. 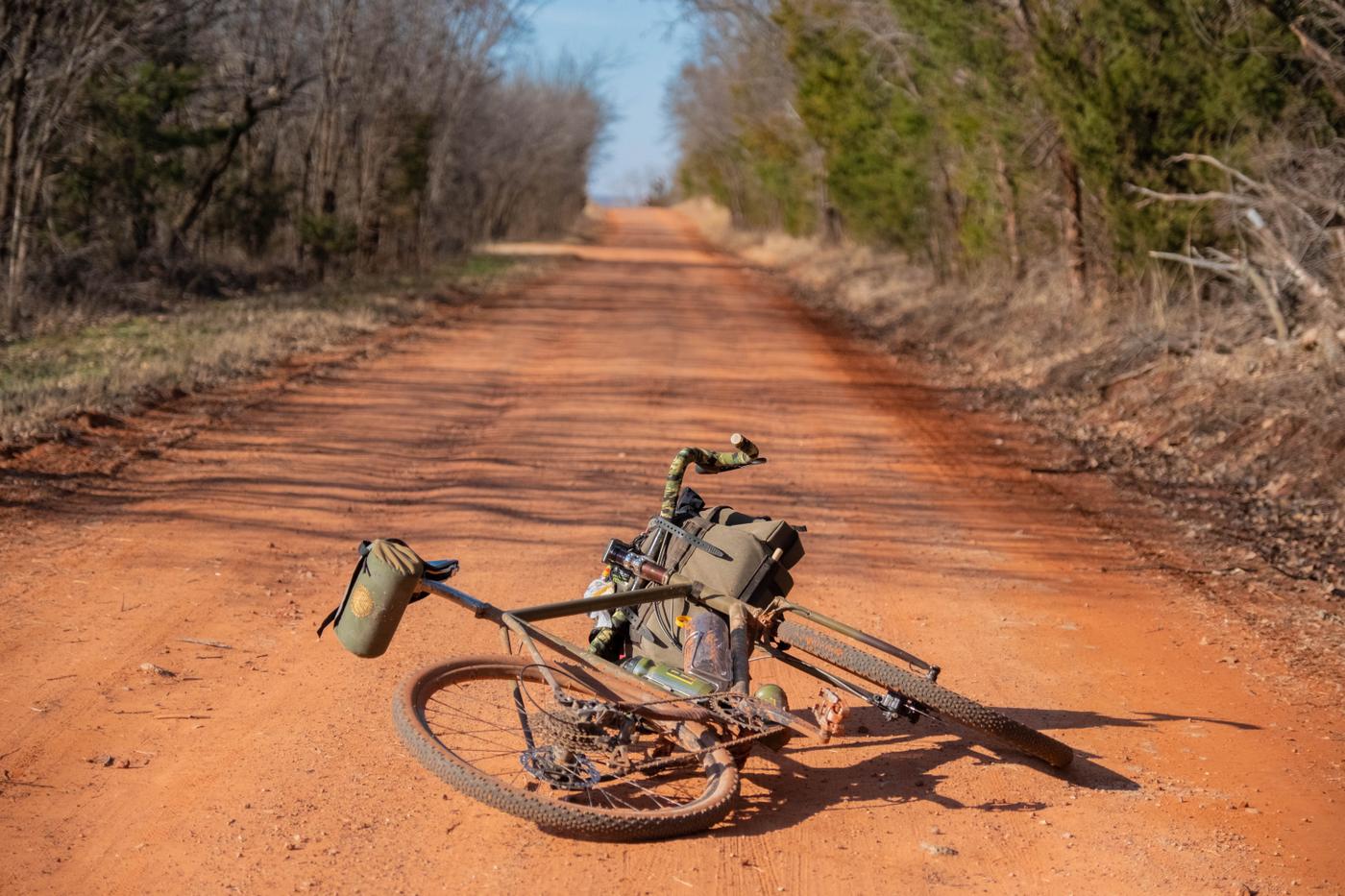 Right before Perkins Matt and Nam caught up to me and we rode together for a little bit but I lost the pace since I hadn’t been eating or drinking as much as I should have in the first half just concentrating on catching people.  We regrouped in Perkins and I finally had that coffee thanks to the folks pulling shots at Rapha, I also had a coke and a pickle and was feeling pretty good, I downed some water to combat the dehydration I was feeling from the first half and hopped back on my bike out of town.  We rode together till about mile 60 where I lost the pace again. Look there’s finally mud! PARTY!  I stopped at mile 69 and had a little party to myself, regrouped in my head and continued on. Over the next few miles, I hit a wall. My lack of fitness was apparent, I began rolling the backside and soft-pedaling the faces. Right before the Oasis, I got a text I was about an hour back at this point. After passing a Jeep stuck in the only mud pit on course, I was finally at the Oasis and it was a party!  Would you like a beer? Hell yes! Margarita? Sure! Before I knew it I was two deep and ready to party on some dirt roads, I almost got sucked into the oasis, but I got rolling again. It’s amazing what a little hydration can do, the next few miles were a wild. Right before the chaise, I hit another wall, but I left there invigorated by the stoke. I left there, thinking I’d surely at least beat the sun.  Well, that came and went and I was thankful I had a light this time around. Cramped and hiking up one roller I heard some coyotes in the distance as the sun fell behind a wall of darkness, I was alone and my GPS died, I saw a faint tail light ahead and played catch up for the next bit. Several jeeps passed asking me if I had wanted a ride, responding with an astounding NO each time.  I didn’t want to catch a ride this time, and with each hill seemingly another jeep had come and gone, each time asking if I had wanted a lift.  Each time answering NO! I wasn’t gonna give up this time, my derailleur was intact, my bike wouldn’t fail me, I was crossing that line and getting that hug.  Amidst some solo dark miles,  I got a text; where are you, we are at the line ready to party.  I responded with where I thought I was and continued on soft-pedaling just trying to finish, which took me way longer than I anticipated. I had lost all track of time in the darkness and without any sort of map. Finally, I saw a 49th street sign and the glow of the city in the distance, I was finally close, I felt something in my legs I hadn’t and pedaled the last bit with some vigor I had lost.  Rolling into the lights of the finish line without the aid of the Red Dirt Jeep club, no mechanicals and my mind cleansed by dirt,  the last two years anguish was wiped away in an instant.  I’ve heard that dirt and a hug can be transformative but this year I felt it all link together.  I never did catch Kyle or Liz though!

Thank you to everyone who made Land Run so special this year, can’t wait to party in 2020.