It’s no secret that Owens Valley has become a favorite playground of mine. It’s the interstitial region where I like to ride and explore when the Spring temperatures are too hot in Los Angeles and Death Valley has already hit triple digits. With natural hot springs, enough geologic formations to shake a stick at, and lots of rich history, this place is both an educational experience and a thorough workout, all in one. Especially when you begin to venture into the Eastern Sierra.

History. It’s something we rarely touch on here, and to be honest, I’m not sure why. I’ve read numerous books on Owens Valley, including Cadillac Desert, the history of how Los Angeles robbed this region of their water, and quite frankly, continues to do so, even today. After this trip, I found myself asking “where did the name Owens Valley come from?” To which, a quick history lesson began. It all began in 1845. 60 men, including John C. Fremont, headed out west from the Oregon Trail. With them was pathfinder Kit Carson and en route, this team picked up Richard Owens and Joseph Reddeford Walker, both friends of Carson. After weeks in the wilderness, the team reached the now-named, Walker Lake in Nevada. From there, the expedition split, sending Fremont, Owens, Carson, and a dozen of others north to cross the Eastern Sierra along the Salmon Trout River. Small tidbit: this river is named the Truckee today.

The remaining group, including Walker and Edward M. Kern, went South West along with Theodore Talbot, eventually running into the head of the now-named Owens River in mid-December. This team followed the river south until they reached the now-named Owens Lake before continuing on over a pass, which later became Walker’s Pass and met back up with John C. Fremont, along with the others.

Post-expedition, the river, lake, and valley were named for Richard Owens, even though he never actually saw them. Later, Edward Kern settled in Kern County. 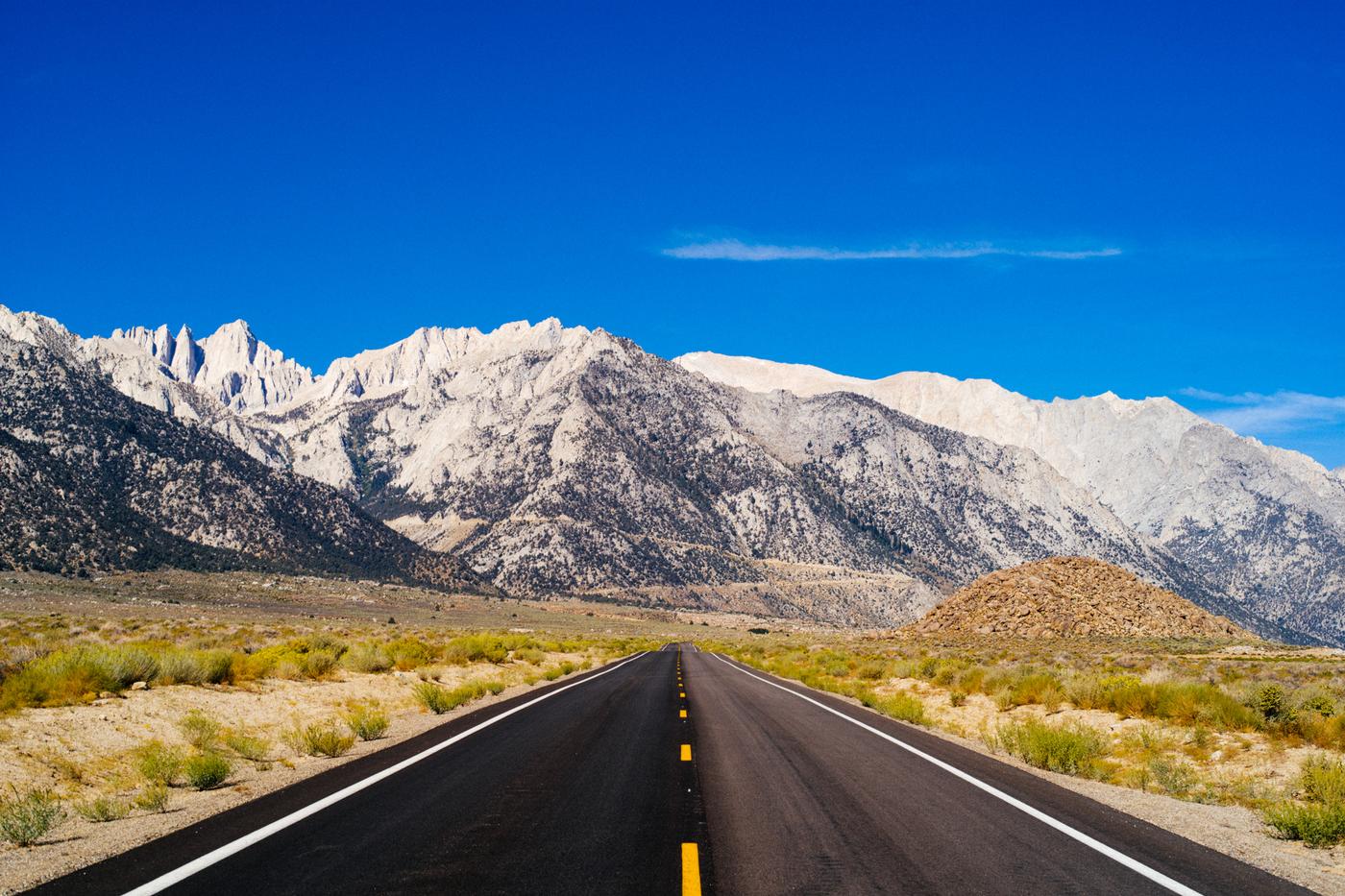 It goes on and on from there, with the history of Mt. Whitney and the fortunate tale of how Whitney Portal and Horseshoe Meadows came to be. Whitney Portal, formerly, Hunter Flat and Hunters Camp, is the gateway to Mount Whitney, the highest point in the US. At the top of Portal road is the trailhead for the Mt. Whitney hike, along with campgrounds, facilities and a restaurant, which in the off-season is more like a souvenir shop. The road reached the top of Whitney Portal in 1936, changing the name of its destination, which was previously called Hunter Flat in honor of William L. Hunter, yet another Owens Valley pioneer. This road climbs to a height of 8,374′ in a just under 8 miles. Originally constructed for a proposed Disney ski area, which met its demise when, thankfully, the Wilderness Act came into existence in 1964, Horseshoe Meadows was an engineering feat of the time. With five enormous switchbacks and an approach that looks like it was cut from space with a laser, this road climbs from 4,525 at Whitney Portal road to over 10,000′ at the entrance to the now established Golden Trout Wilderness area. I remember one of my first interactions with Horseshoe Meadows seeing a hang glider taking off while I was driving on 395. It was like a beacon, drawing my attention to these monster switchbacks. Then, Ryan Wilson did a ride that would inspire this very trip. Ryan and a few other Angelinos took on Whitney Portal and Horseshoe Meadows in one sitting, topping in around 60 miles and 11,000′. Earlier this year, after our Team Dream photoshoot, I planned on coming back to do this very ride and I knew the dude to take with me. Kyle and I are pretty well matched in terms of road cycling. We’re both bigger guys by nature and while we can ride all day, our speed is usually on the throttled side. No disrespect to the Team Dream Crew, but they’re on another level. Those dudes are fast and as a slow and steady rider, it’s mentally exhausting to feel like you’re slowing everyone up. For me, this was about fitness. I’m heading to South Africa in a few weeks to take on the Karoobaix, a grueling “race” through the Karoo Desert and while I’m in fair shape, I wanted to take on a few rides before heading out. Truthfully, I didn’t even want to take photos on this trip, but couldn’t resist. For Kyle, he’s planning to ride a road bike from Badwater Basin in Death Valley, to the top of Whitney Portal in a day, only to wake up and hike Whitney the next morning, so Kyle wanted to see what lumbering beast awaited him at the end of his long ride from Death Valley. We both had our agendas but agreed we should throw in Horseshoe Meadows as well, giving us a rather ambitious ride goal. We left Los Angeles and found ourselves already hanging out in camp, making dinner, a short four hours later. The following morning, we set out for our ride. 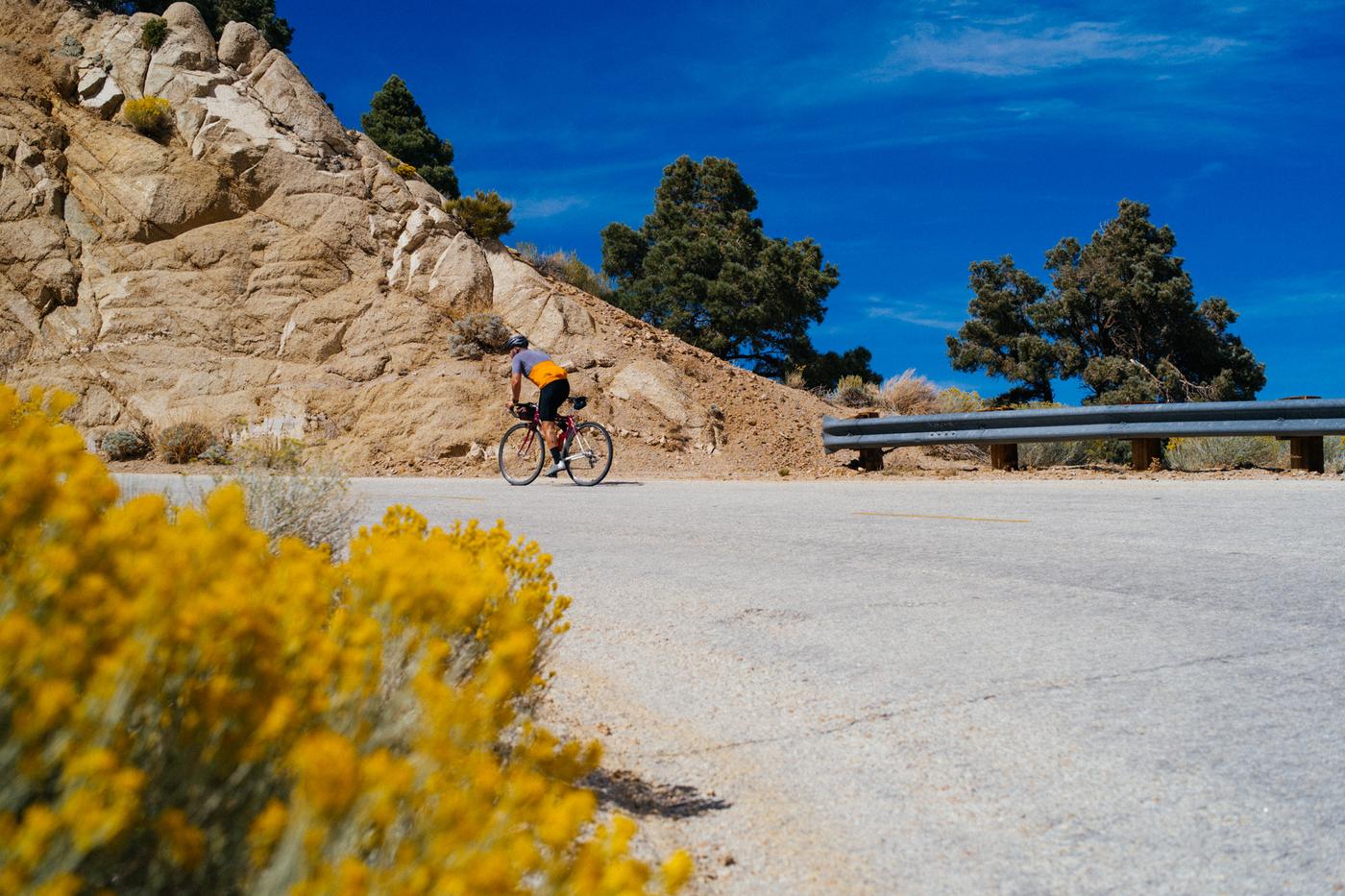 I’ll go on record and say Whitney Portal was easier than I expected. Much easier. Especially if you’re willing to take the approach easy. It wasn’t until Horseshoe Meadows that I began to feel the burn in my quads. Slowly but surely we made it up the switchbacks, before I was completely out of water. As we rounded one of the last turns, I heard a spring trickling down from the mountains. Immediately, I said “fuck it” and dipped my bottle into the ice-cold water. One, two, three bottles later, I felt like a new man and we were ready to press onward. Upon reaching the top, we joked about how cold it was going to be descending and boy, was it ever. From 50 degrees on the top to a blistering 90 in the valley, we went through three seasons in one, fast descent before stopping for a burger in Lone Pine. Oh yeah, we had another 1,000′ to climb in order to get back to camp. Yikes! Our day was around 60 miles and almost 11,000′. 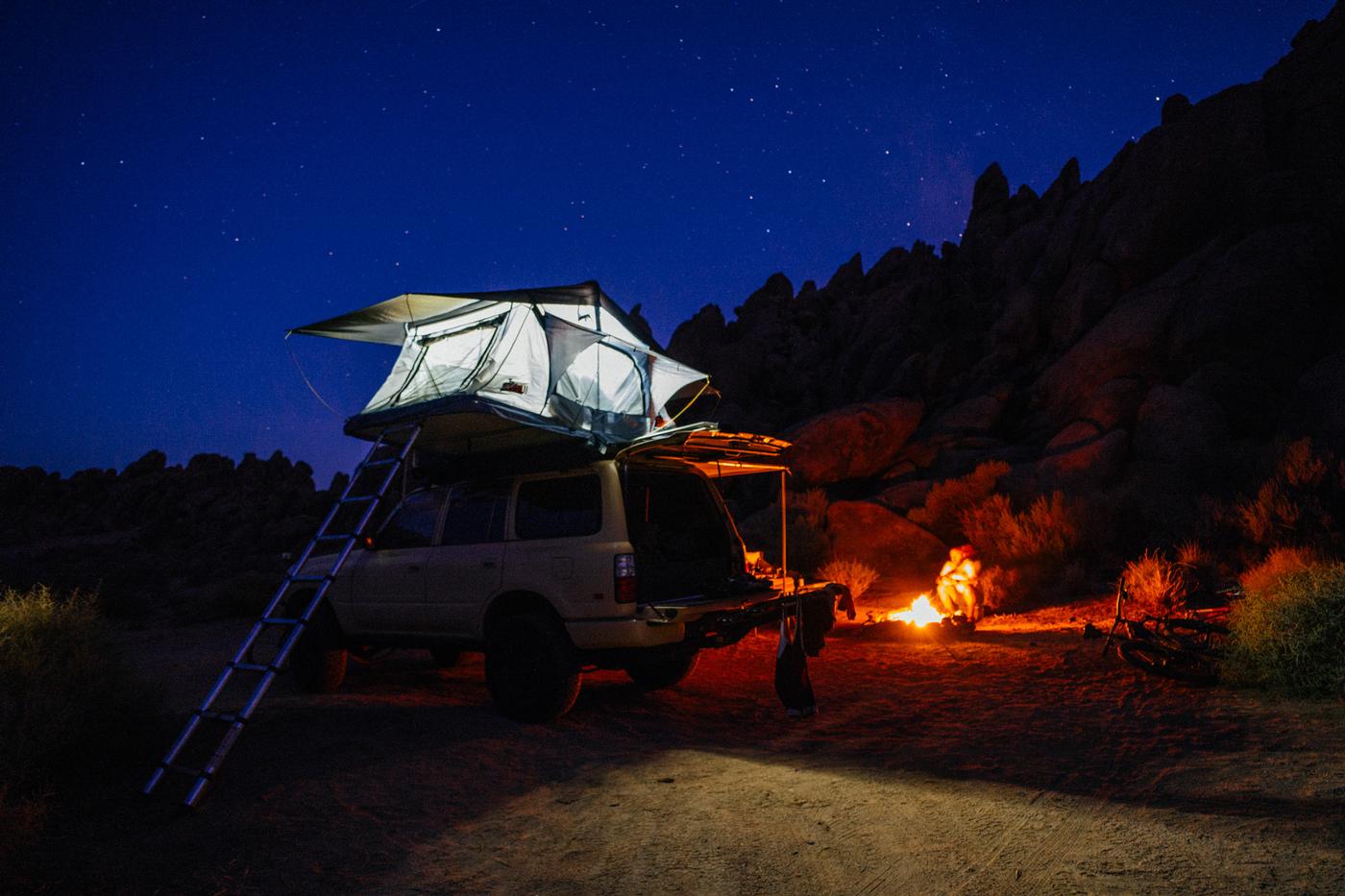 I popped two Floyd’s of Leadville CBD capsules – really, I did! – and made a fire. Our friend Colin was coming in from LA for the next day’s dare I say, festivities. Our firewood was running low, and since I stopped drinking momentarily, we never bought beer for Kyle. Oh and I also forgot my camp chairs. The short of the story is, Colin was bringing some much-needed supplies. In the meantime, we sat under the Milky Way and observed the stars glimmer and shoot across the sky. Colin arrived late, but we arose early the next morning. Our plan was a rather ambitious one. A full year before Eric and I rode up White Mountain, Kyle planned on doing the same with Ryan Wilson and Eric. His idea was to tackle White from the West, going up Silver Canyon Road. From there, they’d summit White and then come down Silver Canyon Trail, a piece of singletrack and arguably the only ridable trail in the area. After more research, the day before they took off on the trip, Kyle realized this would be nearly impossible to do on ‘cross bikes and would end the ride before it started. Instead, the group opted to start at the Bristlecone Forest. They reached the summit and outran a storm on the way back down. Later, Eric and I would ascend White from the visitor’s center and again, outrun a storm on the descent back down. There’s a theme here… When I mentioned to Kyle that I wanted to go to Owens Valley to ride up Portal and Horseshoe, he said we should bring mountain bikes and do Silver Canyon as well. At the time, it sounded like a good idea. So there we were, eating breakfast at the Alabama Hills Cafe, looking at where we should start the climb and discussing how much this is going to suck. In short, Silver Canyon ascends 6,000′ in 6 miles. Some people begin at the town of Laws, but in the interest of time, we began where Silver Canyon Trail would end. We drove up the canyon road, through the creek crossings, parked the car and began the ride, er hike, up. Almost three hours of hike-a-bike later, we hit the top, over 10,000′ and were greeted with hellish winds. A storm was coming and a big one. We’d later learn it was the first snowfall of the year. We sought shelter in the Bristlecone pines, ate a snack and began the descent down to the car. Words cannot express how magnificently fast this trail is. Breakneck speeds met with loose scree and hundreds of feet of exposure. Even taking our time to take it all in and shoot photos, we all topped out at breakneck speeds for singletrack. This hike a bike “ride” came in around 12 miles and 4,500′. With sore hands and dusty faces, we regrouped at the bottom and split off. Colin had to get back to town, but Kyle and I wanted to go to a swimming hole Cari had shown me earlier in the year for one last dip of the season… Veni, vidi, vici and I’ve never been so sore after two day’s worth of riding. Owens Valley continues to deliver some of my favorite rides in California. While these two days were on the tougher end of the riding spectrum, my next trip will be a little more chiller… Stay tuned and thanks for reading along!