This goes without saying but please don’t come to Santa Fe – or any small town – during the pandemic. Our hospitals are overwhelmed and our neighboring indigenous communities are suffering at disproportionate rates. The intent for pieces like this is to encourage looking local for an escape…

Our provocateur this round was Mike Chapman, owner of The Broken Spoke. Thanks to La Niña, our ski hill is suffering an abysmal base which is usually where we would find Mike this time of year. Instead, he has been spending this winter re-tooling the bike shop and trying to secure bicycles and components for 2021–an odyssey of its own. 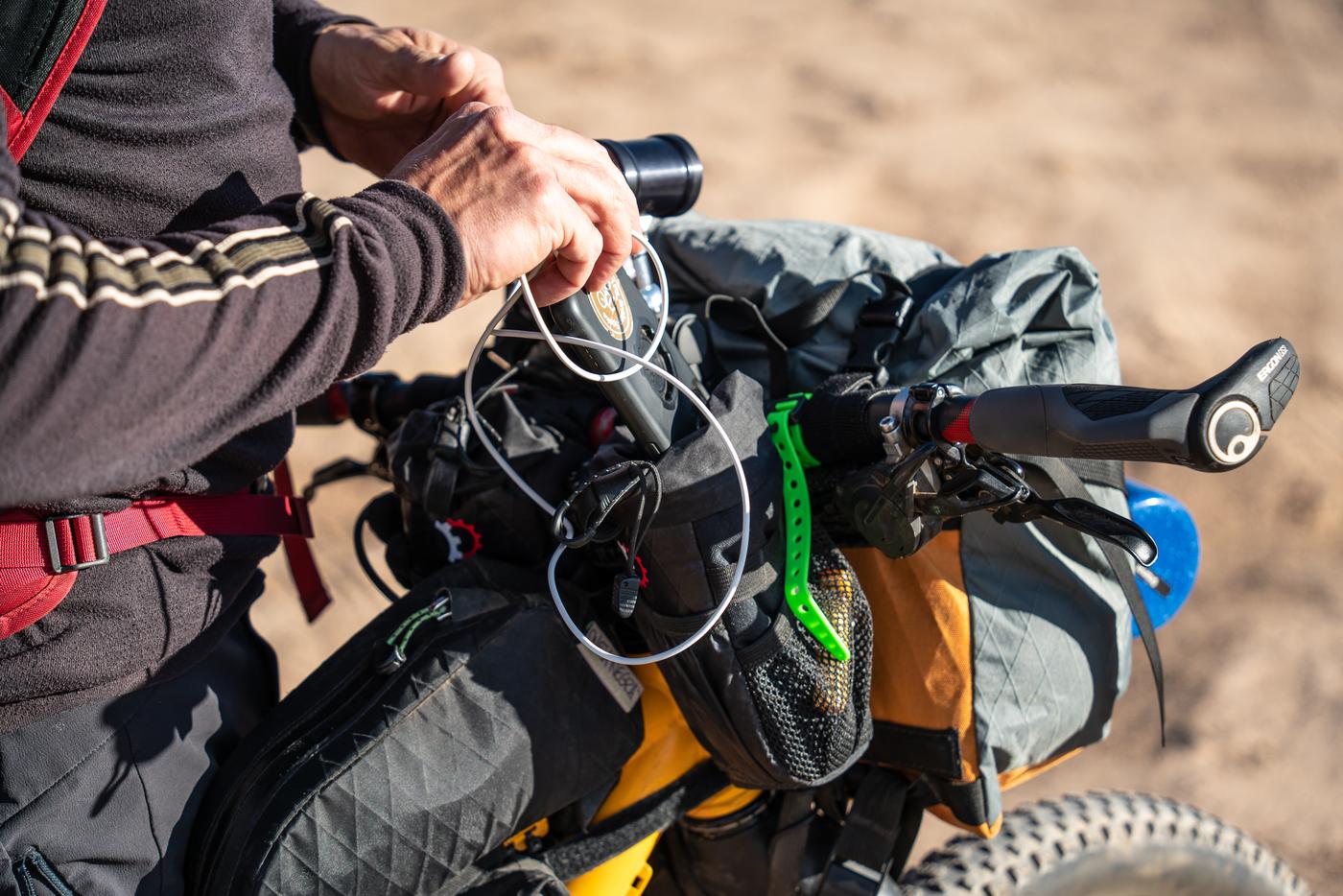 The Broken Spoke was an early promoter of bikepacking, keeping the floors of the shop stocked with an assortment of Surly bikes and dedicating whole retail spaces to bags from Oveja Negra, Revelate and others. In past years the reps from these brands would stop by Santa Fe for a shop visit and often find themselves riding from town either up into the mountains or sleeping beneath the New Mexican skies out in the desert. It’s the sort of close-knit community that fringe activities and small companies organically create, intentionally or not. 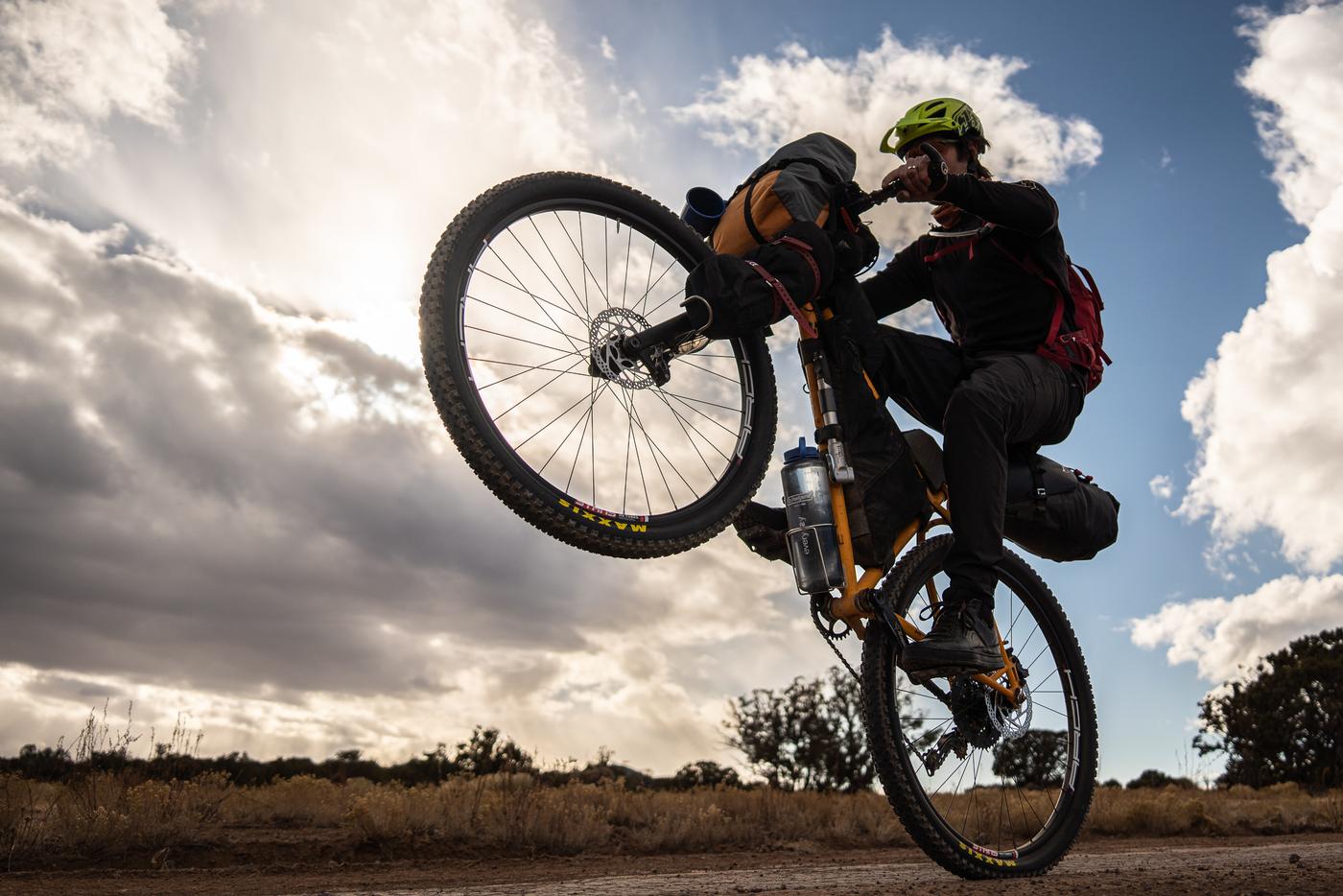 In the case of Mike and ‘Spoke, it’s been intentional. In years past when retail doors were open, it wasn’t uncommon to find one-off builds, small manufacturers, and well-beaten gear filling the storefront. Normally, Friday night clinics were held for folks to learn the ins-and-outs of bikepacking and staff overnighters were the norm, which has been more poignantly painful considering how many folks have discovered cycling during the pandemic. 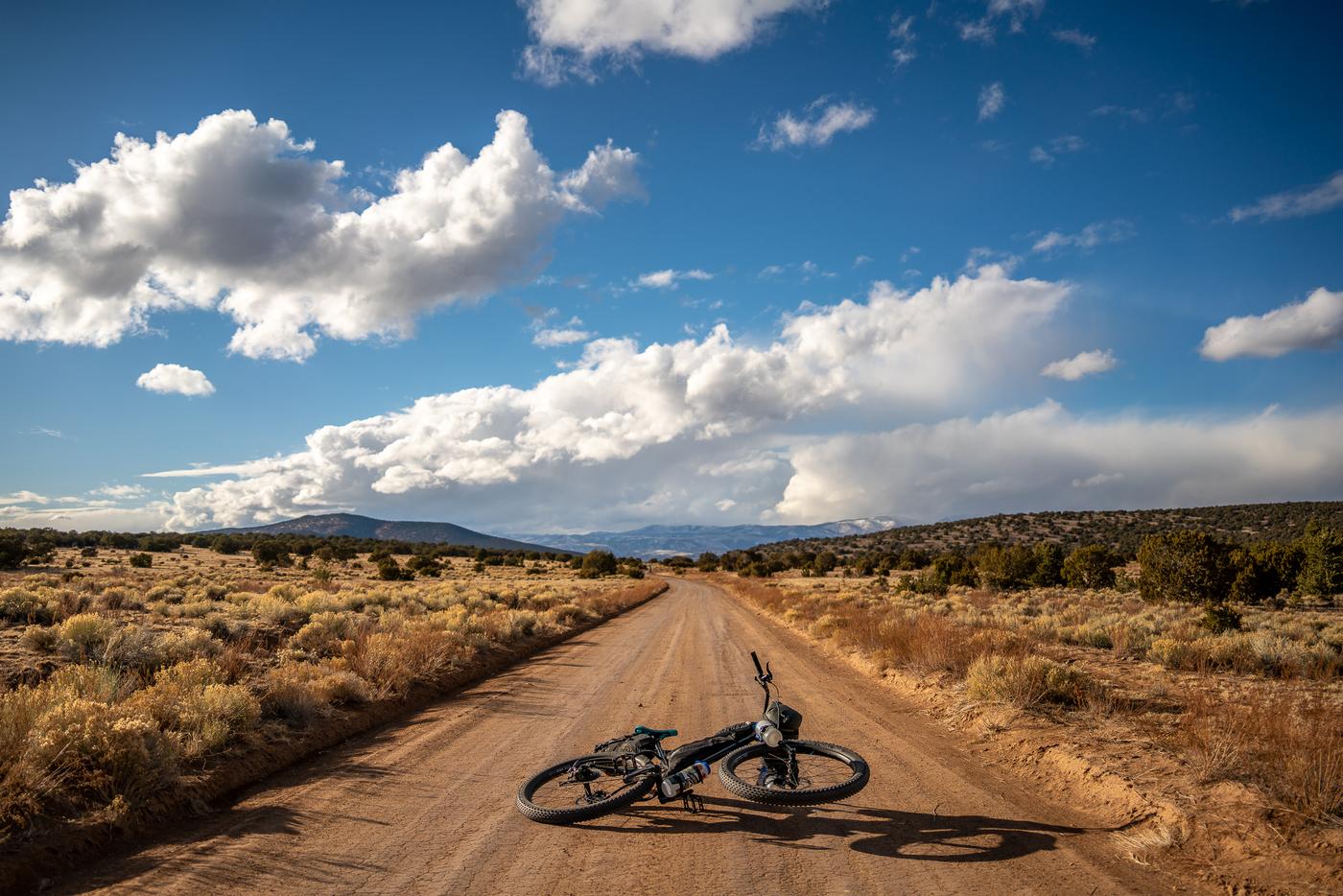 Keeping that fire alive during the past year has become a challenging act of sourcing gear, maintaining safe group sizes, and limited travel. Despite this, or perhaps because of this, we have all become tinkerers. Hours not spent in the field or socializing turn towards making minor adjustments to our rigs. Time not spent driving to new destinations is now converted to scrutinizing maps and planning routes. 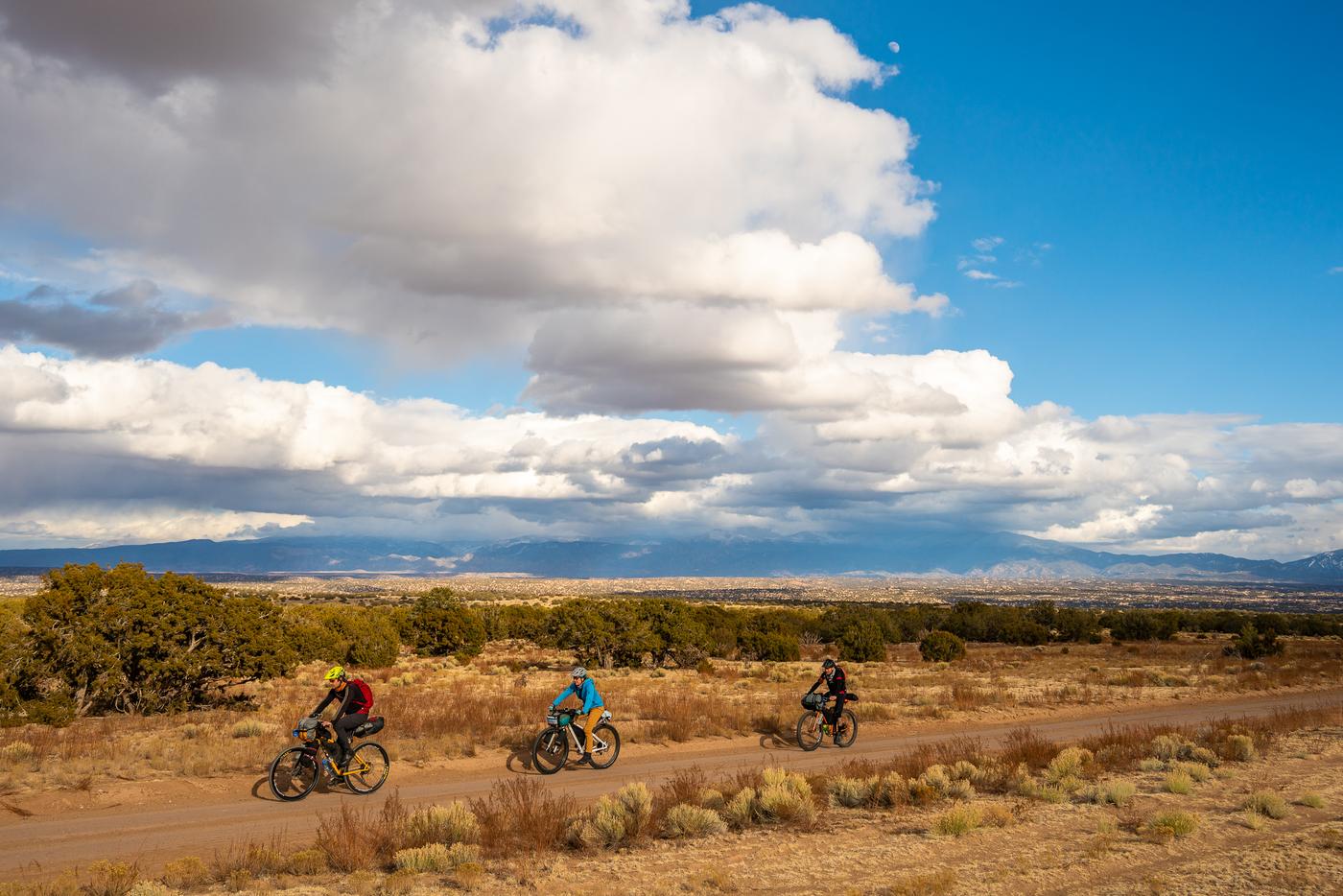 The ride this time is simple: we would start at the shop and cut through our neighborhood before catching a frontage road out to the edge of the Santa Fe National Forest where we would look for a scenic dispersed camping location. Due to its close proximity to town, it was an ideal plan to do a shakedown of our winter modifications and test some cold-weather equipment. Our campsite would end up being exactly 20 miles from the front door. 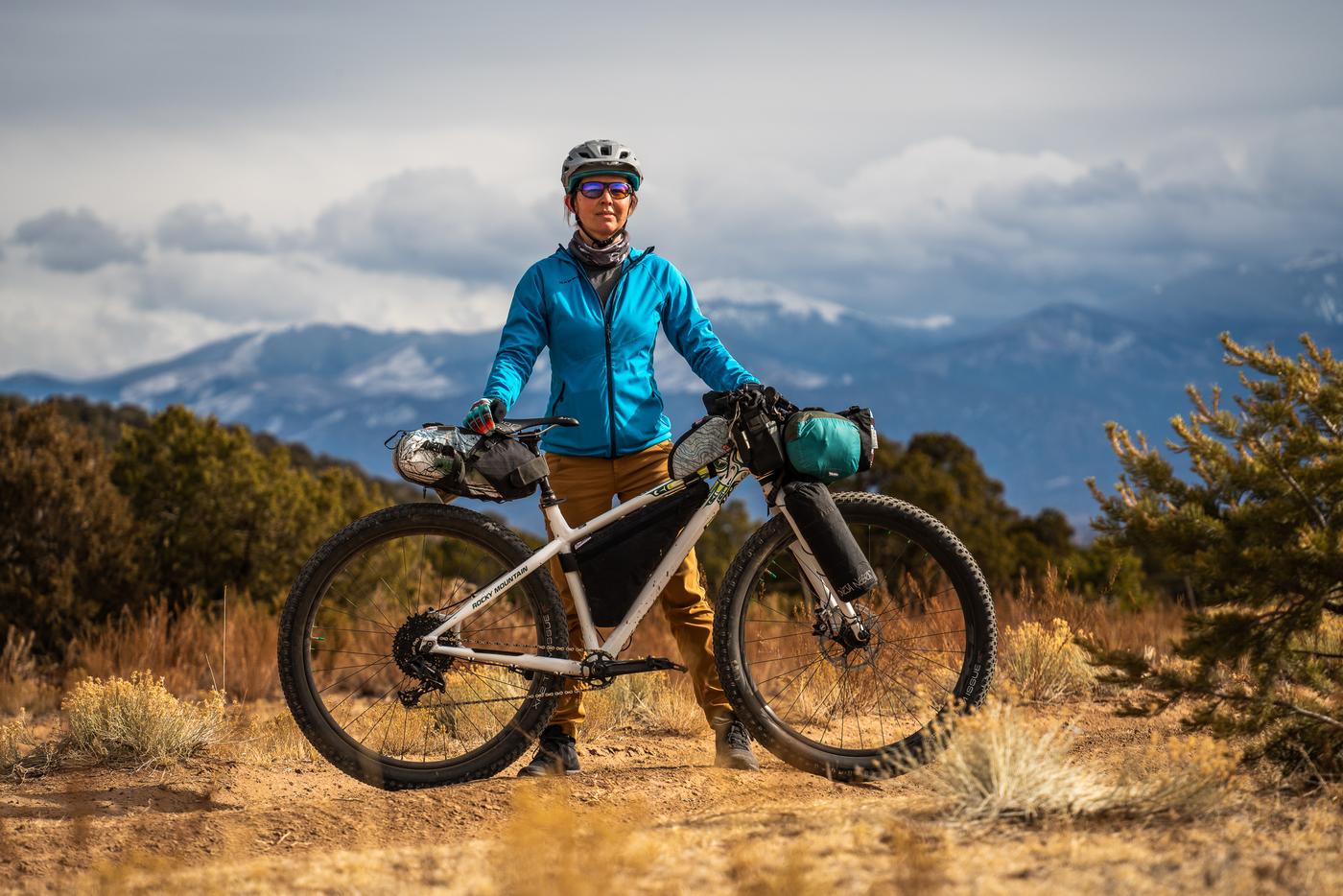 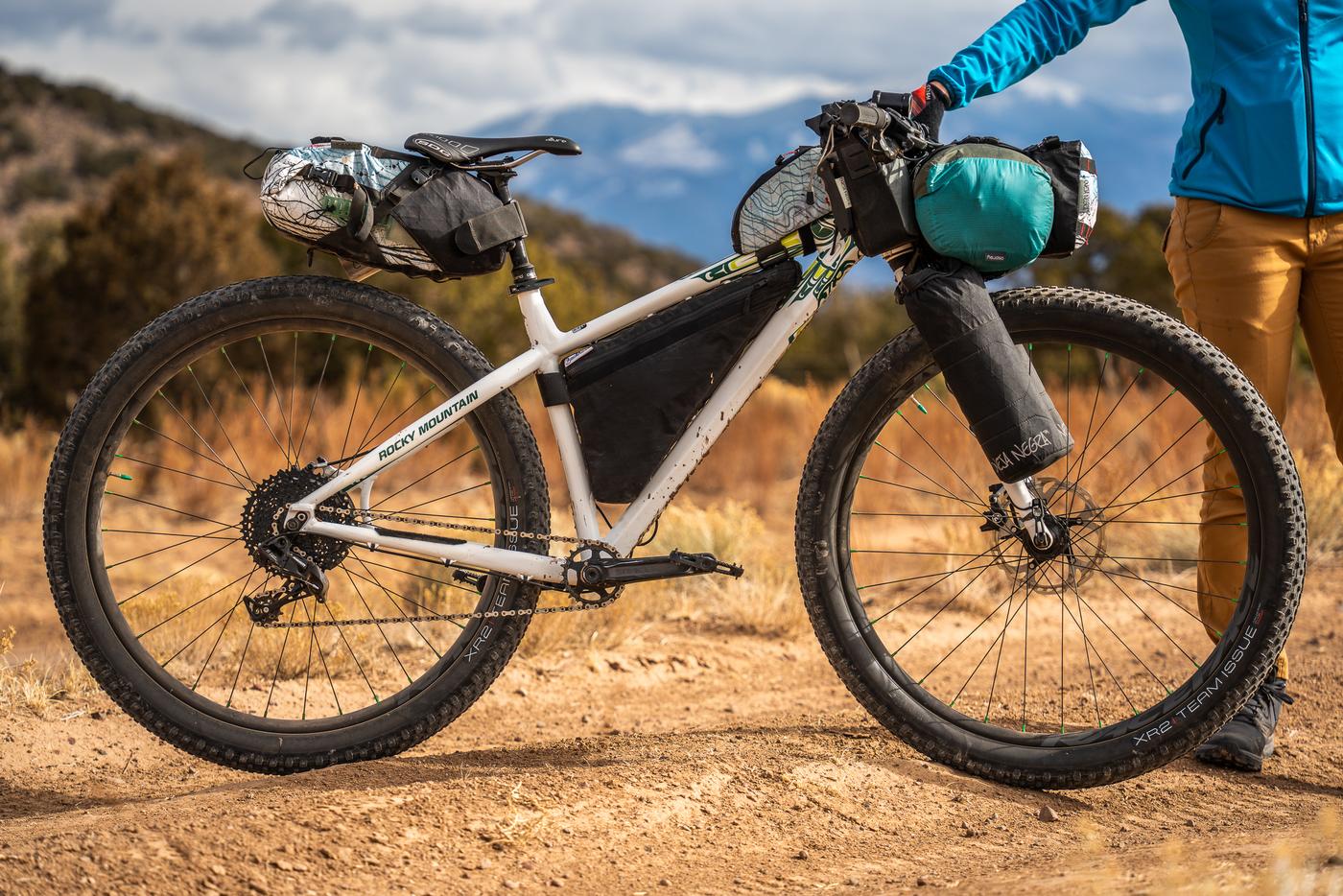 The four of us are all longtime friends, including Pato who resides half the year in Tahoe, but winters in Santa Fe. All of us had new equipment to test from various boutique manufacturers. Mike loaded his Karate Monkey with a Tribulus Limited front bag and was eager to try out his sleeping quilt. Pato loaded up his ECR with some Jones bars and a menagerie of small-time bag makers. Kim was eager to test her 29+ setup on her Rocky Mountain Blizzard while also giving her Albuquerque-made bag, Buckhorn bags, its maiden voyage. I was eager to test out my Albuquerque-bent Doom bars and a custom Rogue Panda frame bag, expertly made to fit my Sklar fatty. 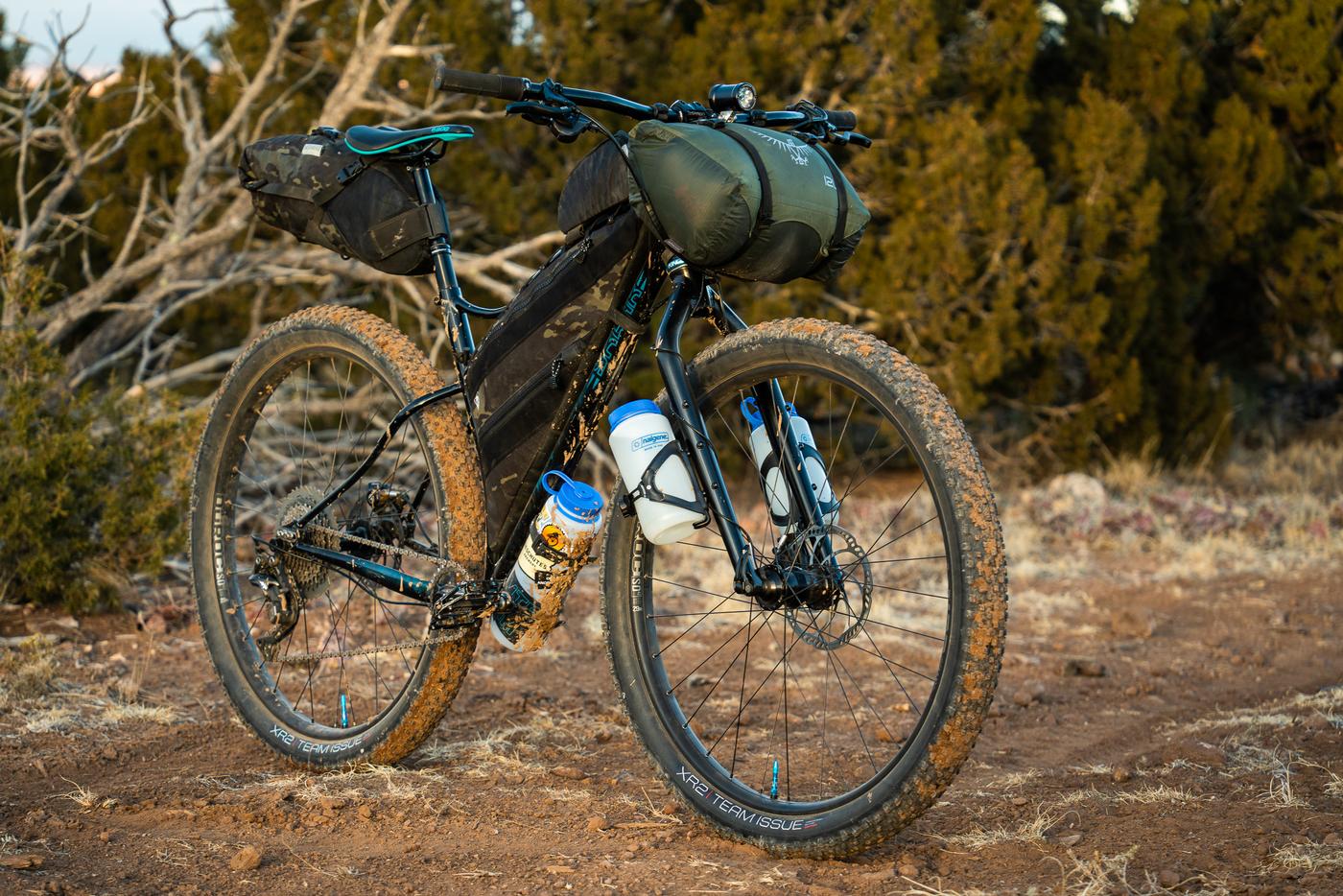 Bikepacking still proves to be the skunkworks of the bike world, where hyper-specific problem solving meets small-batch manufacturing. Taking a step back and looking at the bikes assembled for a quick overnighter made us appreciate ingenuity still toiling away in the dank garages of the cycling world. Maybe during these times of parts shortages, fewer bike-nerdy folks will learn of these unique creators. 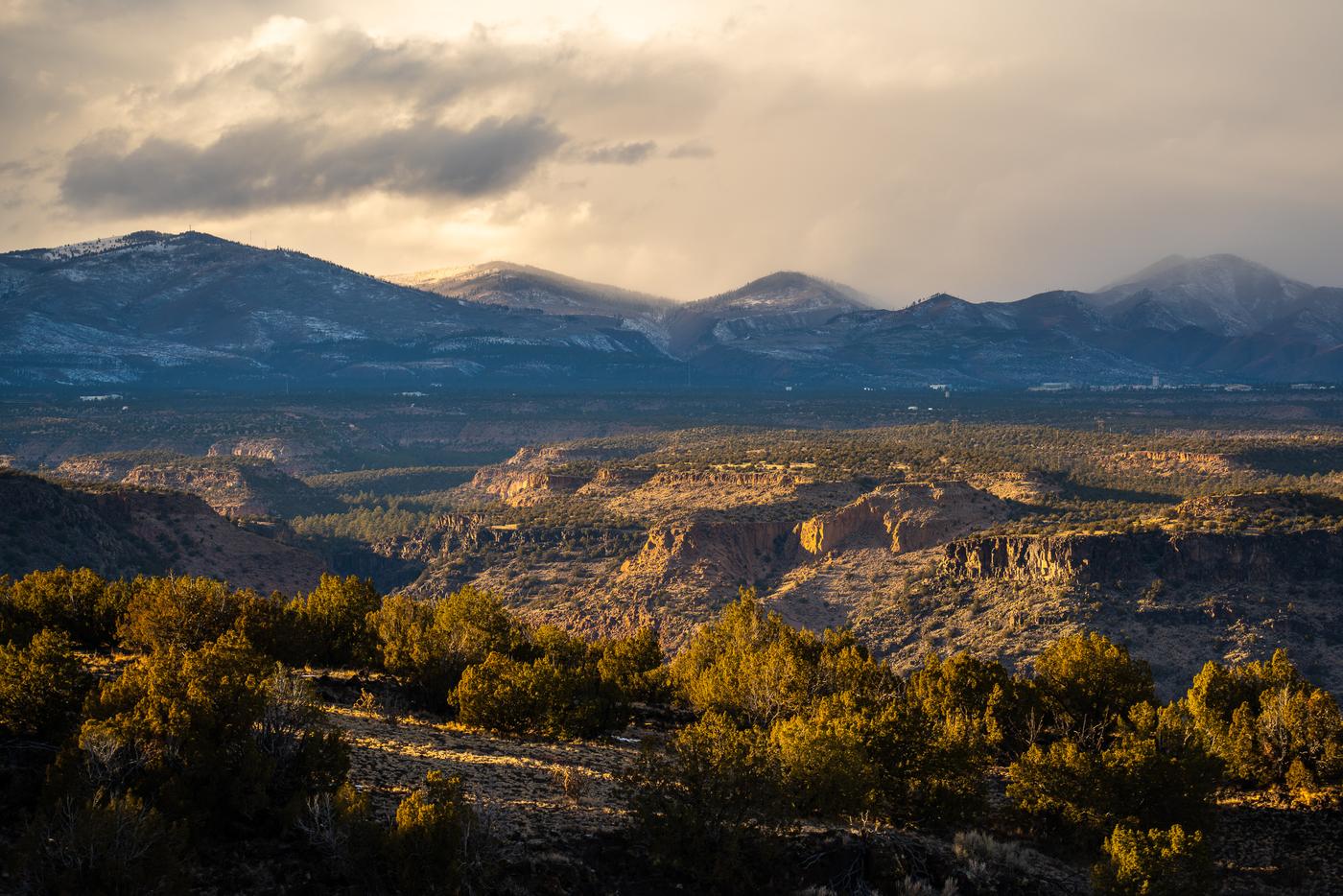 While the ride itself was fairly uneventful, transitioning from asphalt to forest road to faint doubletrack, our risk of slotting a campout between winter storms was worth it. As we neared the Rio Grande canyon, clouds would break revealing snow-covered peaks and instantly warming our faces. Around every bend, a new vista would appear and despite being only a handful of miles from the edge of town we felt as if we were deep in the backcountry. 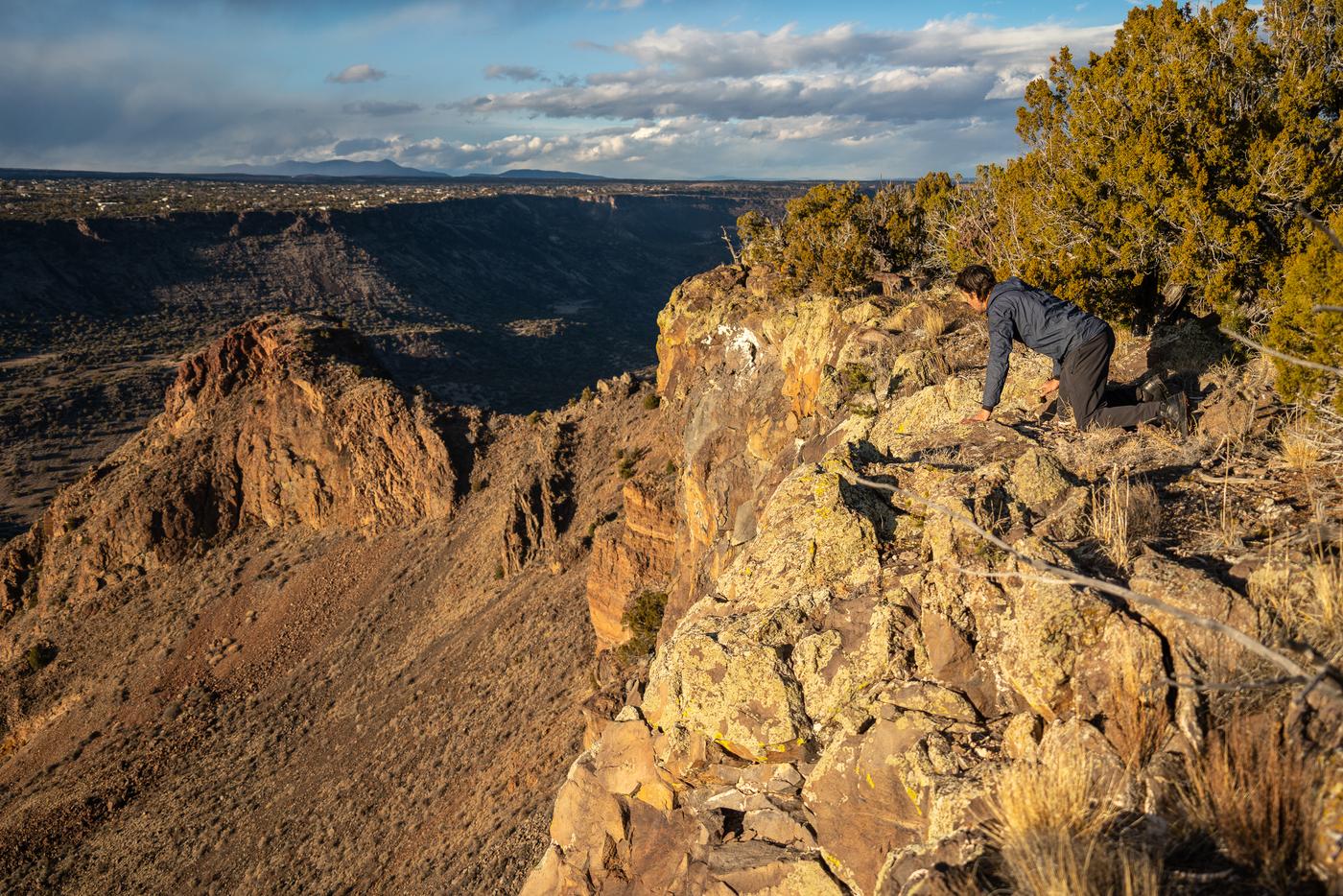 Mike is afraid of heights…

We camped near the edge of the canyon, taking moments to peer into the void and to soak up the setting sun. By nightfall the clouds had all but cleared, revealing a rare Moon Dog; hexagonal ice crystals in the atmosphere refracting the moonlight. Surrounded by a forest of piñon and juniper, wood for a fire was easy to source and we spent the frigid hours sharing stories and catching up, while openly dreaming about what may lie ahead this year. 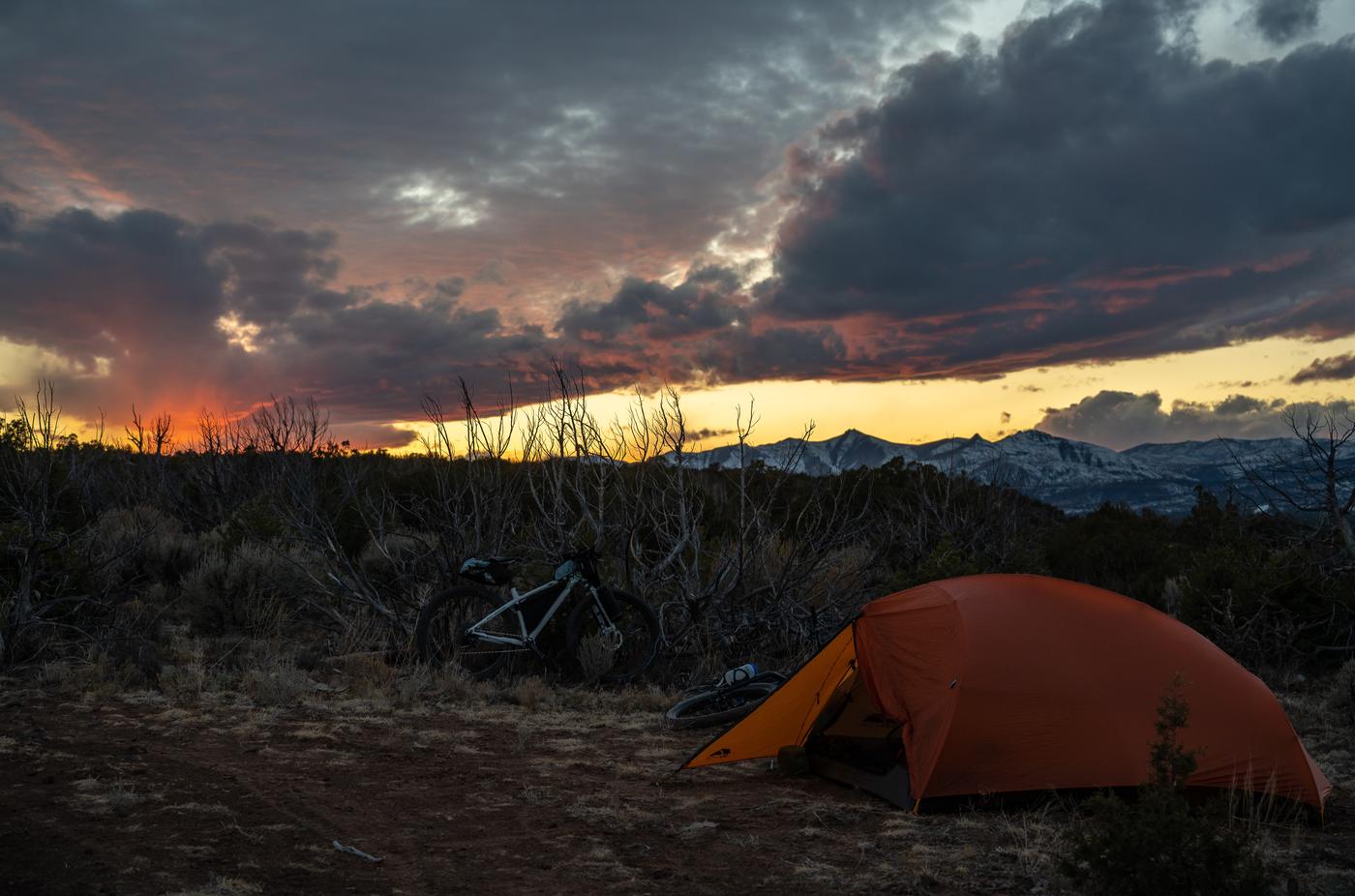 After a night under the stars, our unhurried bodies broke camp, took one last look across the river to Los Alamos and White Rock, and headed back to town. What may be only an 18-hour trip was enough to keep the fire burning until spring arrives and life returns to some sort of new normal.