An Intro to Tenkara

Tenkara fly fishing is a Japanese invention: テンカラ釣り, translating literally to: “fishing from heaven”, or “fishing from the skies”. Fly fishing is all about the presentation of a dry nymph or wet nymph yet traditional fly fishing requires finesse and skill to successfully catch trout in small streams and creeks with its line management and casting. Tenkara, however, is stripped down and much easier to manage. There are two major companies in the USA, Tenkara USA and Tenkara Rod Co. Unbeknownst to me, Kyle would don Tenkara USA’s setup and I went with the Tenkara Rod Co. Both poles telescoped down to 12″, perfect for backpacks or frame bags. You simply expand the poles, attach your tippet, line, and tie a fly. There are no reels. You just lightly flick the pole back and forth, allowing the fly to drift downstream to the trout.

I’ve used my Tenkara setup religiously over the past year, catching Brown, Rainbow, and Cutthroat. From deep in the Sierra, to Idaho, Montana, Utah, and Nevada. The ease of use and ability to fish in smaller streams makes fly fishing with a Tenkara quite relaxing. 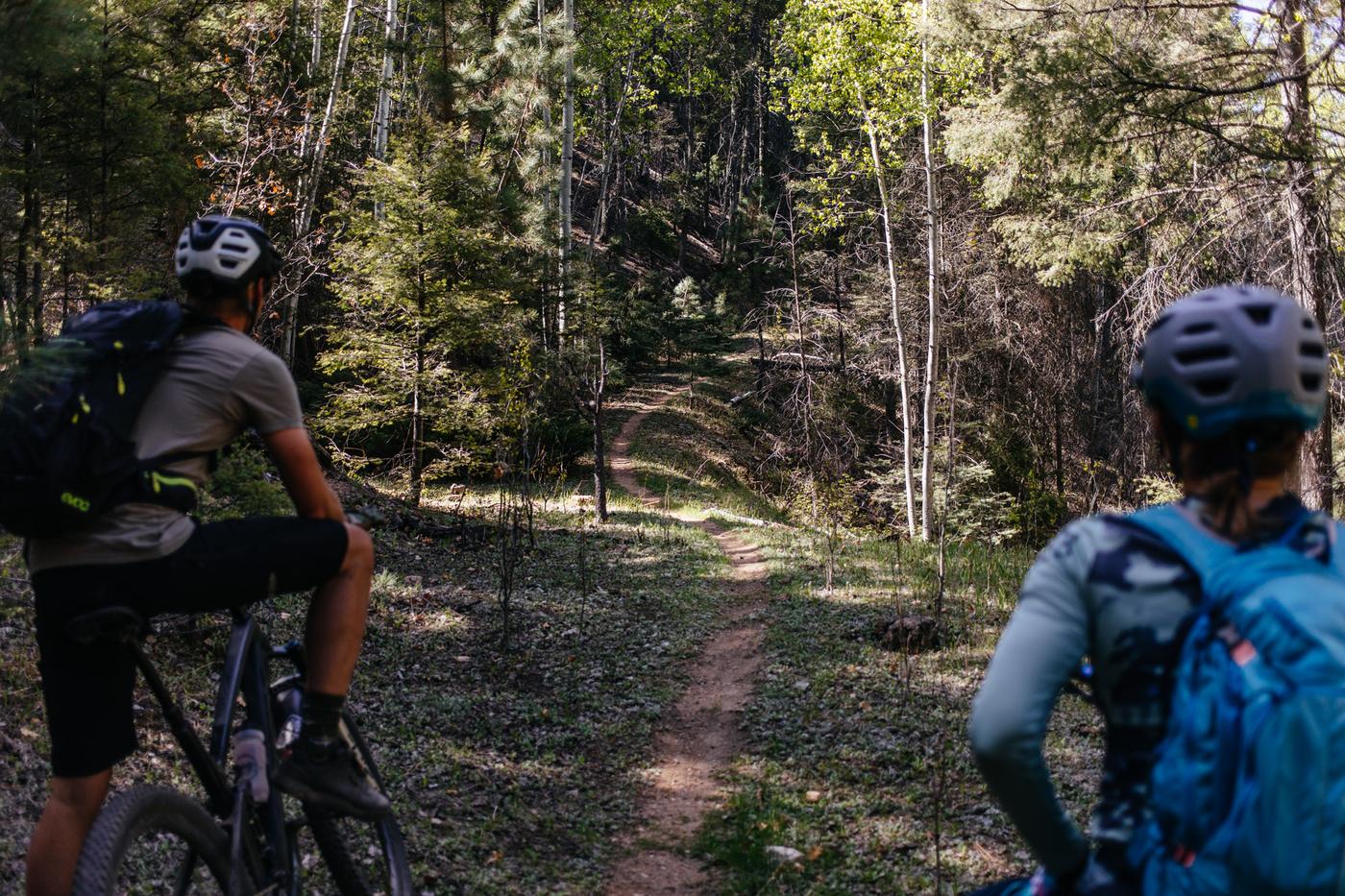 Kyle and Kim work with the Fat Tire Society, our local trail maintenance body, as well as a website called Santa Fe Singletrack, which partners with Broken Spoke to create loops for riders of all abilities. One of these routes is called the Rancho Viejo Backcountry Loop.

This route isn’t all that technical but it would be very easy to get lost and taking a wrong turn in this part of the woods can result in a bummer of a time. It’s important to take a map and hopefully have this GPX track with you if you’re going to embark on this ride for the first time. Kyle and Kim picked me up bright and early. Arguably too early for a lazy Sunday morning but when he said “four hours of fishing” I couldn’t complain. I opted for my Sklar, so I wouldn’t have to take a backpack and crammed it with food (I cooked up a frozen pizza the night before and chopped it up), as well as water, some tools, and my Tenkara. Climbing up the fire road, I began to comment on how nice riding in shade is, coming from exposed, dry, and hot climbs in Southern California. The spruce, pine, and aspen created a cool tunnel to ascend within. Before we knew it, or before I could believe it, we were jamming down a trail and crossing our first creek. We rode past a few holes before getting a line wet. Kyle had his eyes on a Brown Trout that had previously eluded him. A few minutes in and he had it on the line, only to lose it yet again. Frustrated but acknowledging we had plenty of time for more fishing, we packed up and rolled to our main spot for the afternoon. 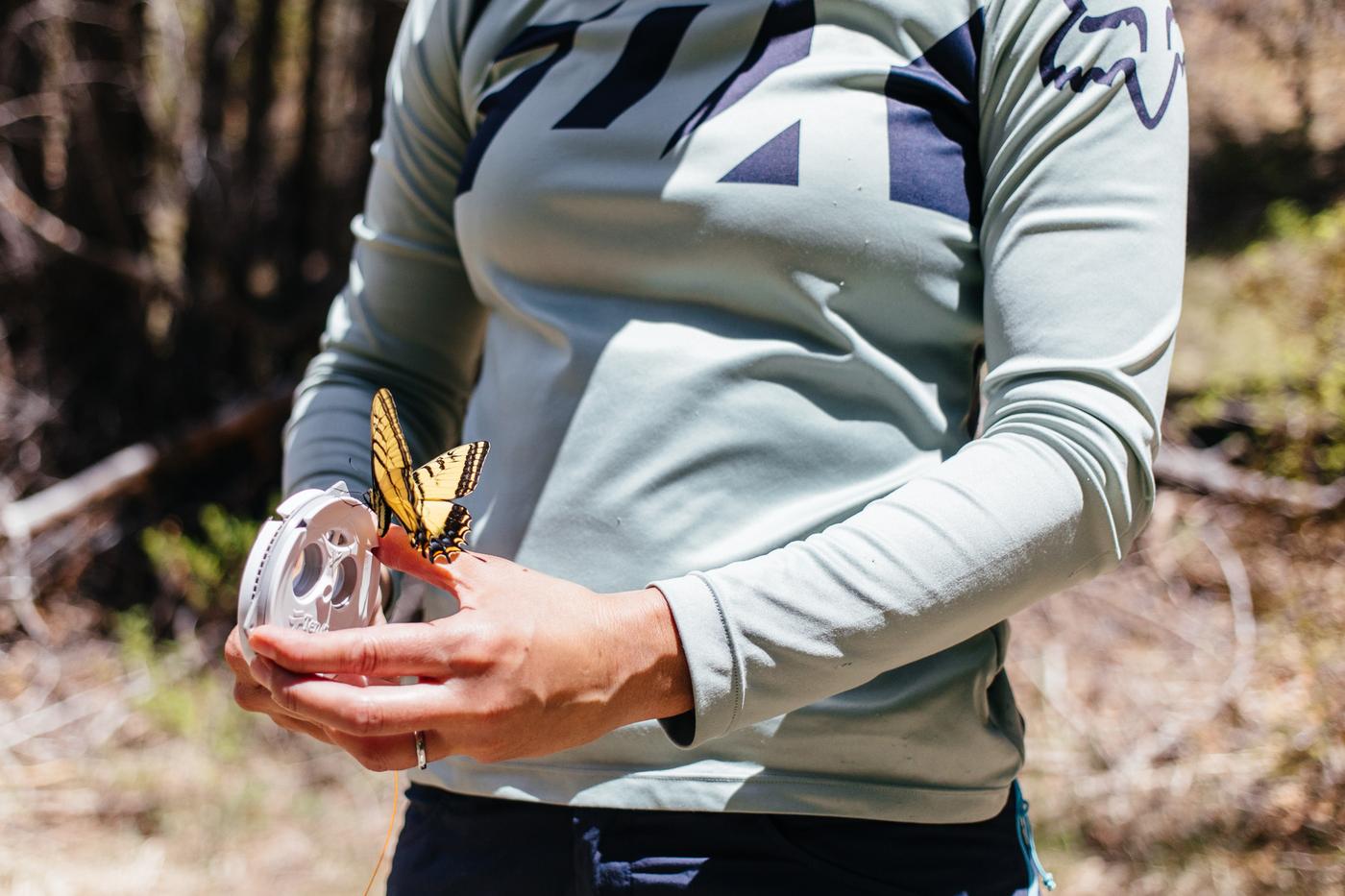 The sun was high in the sky. Bad for photos and bad for fishing but soon that changed, as the sun fell behind oncoming clouds. I used to love seeing clouds in the skies but back here, it could mean rain, and rain in the backcountry can bring all kinds of problems, especially when your main climb out is in a massive drainage gully. Putting my anxieties aside, Kim, Kyle, and I took turns fishing this little hole that seemingly maintained a healthy population of trout. Brown, Cutties, and Rainbows all sat there, jockeying for position to rise up to our flies. One by one, we caught our fun, releasing them back to the cool pools and abundant shade. Four hours and two more spots later we realized it was getting late, so we began to climb out of the aforementioned drainage. Hike-a-biking is nothing new and none of us minded pushing up the steep stuff and over deadfall. When you fish for four hours and see very few people, there’s not much that could ruin your day. Before I knew it, I was descending back to the car, my mind whizzing with excitement as I began to plan for our next romp in the Santa Fe National Forest. Bikes don’t have to be your only hobby and that’s the beauty of ’em. Ride to camp. Ride to fish. Ride to shoot photos. The possibilities are endless…