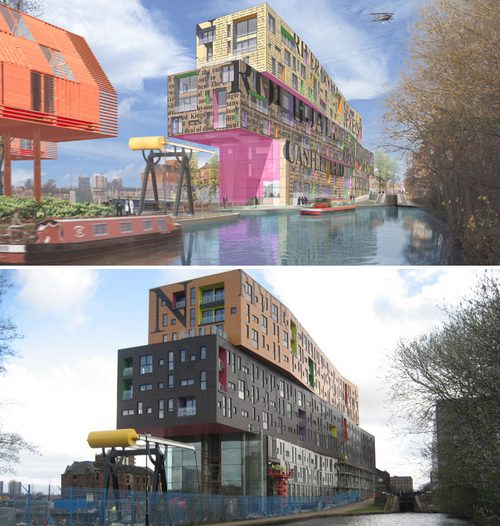 A reader forwarded me this project by Alsop Architecture. They said it was ‘right up my alley’ and they were very right. When I first saw it, I immediately thought it was an MVRDV project. I was wrong obviously. Hell, I even thought it was a Dutch project. Wrong again. This 8-story project was just completed in Manchester.

The parti model of stacking blocks is very much a dutch approach to architecture. In fact, I’m not ruling out that Alsop used MVRDV as a precedent of sorts for it. The project is entitled Chips and consists of “3 fat chips stacked on top of each other”. While most projects relate to the context via vernacular stylings, Chips relates through the use of super graphics.

Each mass has text on it that relates to its surrounding neighborhood.

Pretty rad! Head over to Alsop to see more images.