It’s been just over a month since Bespoked, a bit more since Sea Otter, and a couple of weeks since Philly bike expo. Sadly, due to travel restrictions, I only managed to make it to one of those shows but it’s been fun to watch the others from afar. Seeing what’s going on with a bike show on the internet is one thing but the experience of attending one in real life is very much another, and it’s a thing that until Bespoked, I hadn’t even realised that I missed. Shows like Bespoked really hammer home how far from the main-stream frame building is and how weird and interesting the cycling community can be.

It was really tricky choosing bikes to write about because this year’s show presented a smorgasbord of exceptional work appealing to almost every facet of cycling culture and I’d struggle to explain everything I thought was cool in under 10000 words. As such, I’ve cobbled together a weird line-up of things that I loved at the show that you might not see elsewhere. After a longer than usual break between shows, it’s unsurprising that this year’s show yielded some of the most interesting and most leftfield bikes I’ve seen in a while. Aside from that, it was really exciting to see bikes in the flesh that until now, I’ve only seen on the internet. It was a good opportunity to chat to their makers and understand those bikes a bit better, so without any further fluffing, here’s a roundup of some bikes that got me stoked at Bespoked in random order. 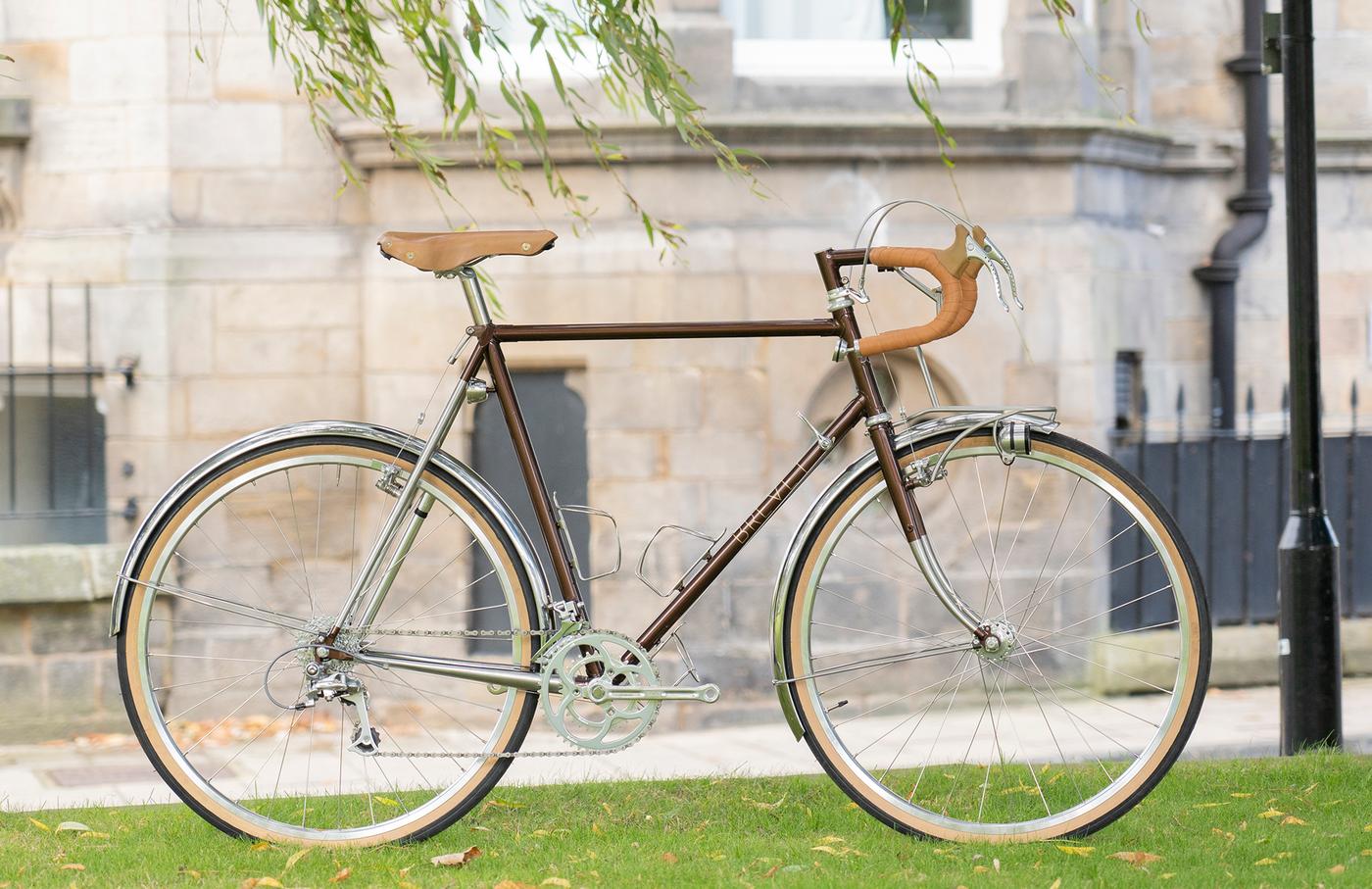 Sebastian Klein of French-based ‘Brevet Cycles’ brought two bikes, a concourse ready off-road tourer and this super elegant and understated randonneur. I was struck by how painfully classy and well thought out it was, with a seamless mishmash of new and old, vintage Campag levers and titanium seat post, with modern Rene Herse canti’s and cranks. Stainless stays matched stainless fork blades, and there was the degree of integration that I feel comfortable with. Cables on the outside where they’re accessible and easy to maintain, with hidden dynamo cable routing and an ingeniously simple top cap that doubles as a switch. I guess there were no novel or striking features about this bike, but it held itself with a quiet dignity. 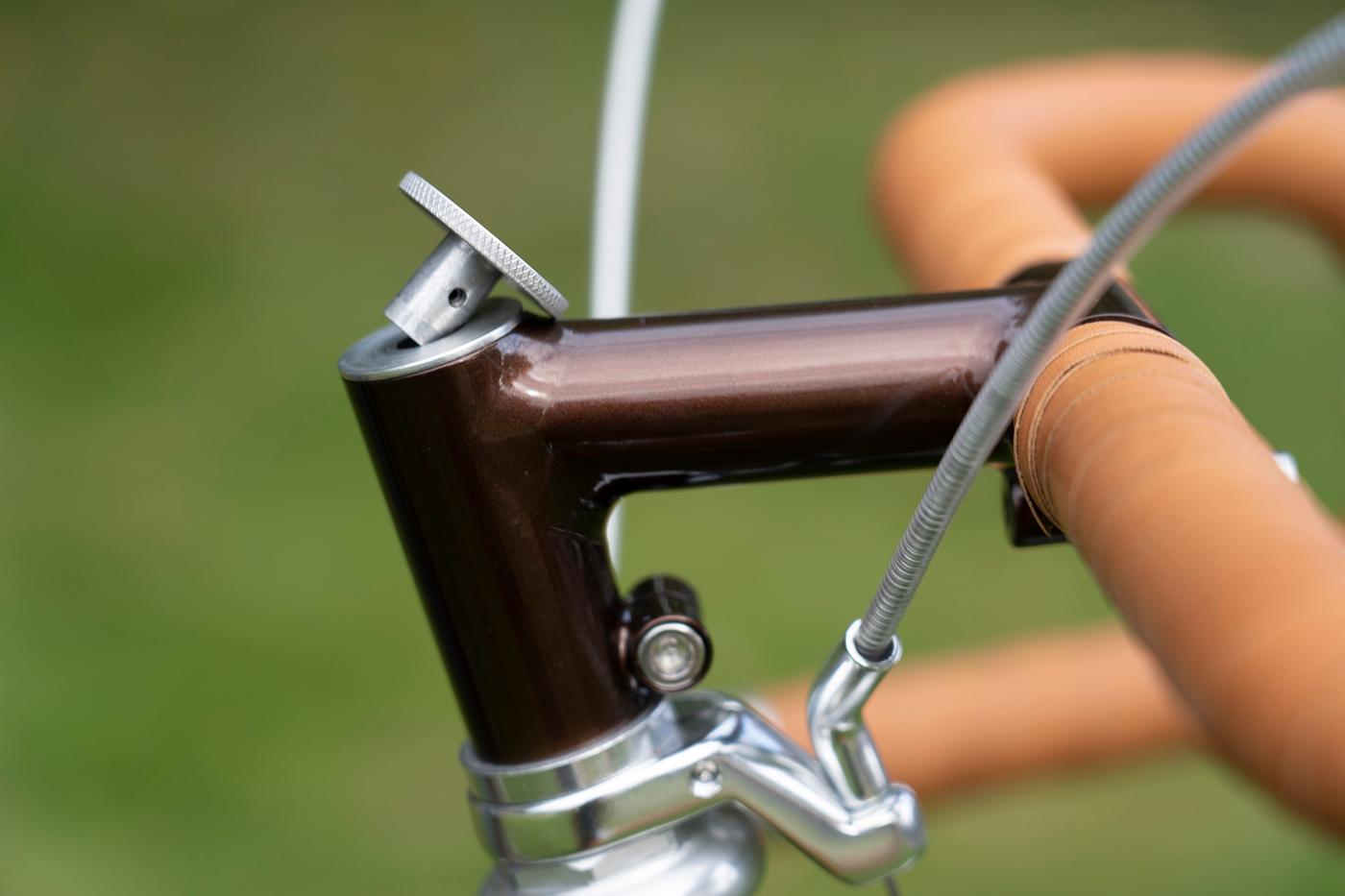 A pleasingly familiar visual language that speaks of quality and simplicity, with nothing frivolous or unnecessary added. I guess it struck me as charmingly un-shiny or perhaps post-minimal. It’s the kind of bike old men would have used as an exemplar of the luxurious ride quality provided by a “whippy” frame at bike jumbles of my youth. Its lack of over-finishing could be mistaken for an unwillingness to spend time, however, the perfectly brushed stainless and subtle lug sculping say otherwise. There’s a maturity and sympathetic understanding to this bike which is surprisingly rare at a bike show. As such, it would have been an easy bike to overlook had there not been a small crowd gathered around the ‘Brevet’ stand for more or less the entire show, enticing visitors to poke their heads around the edges and peer in. 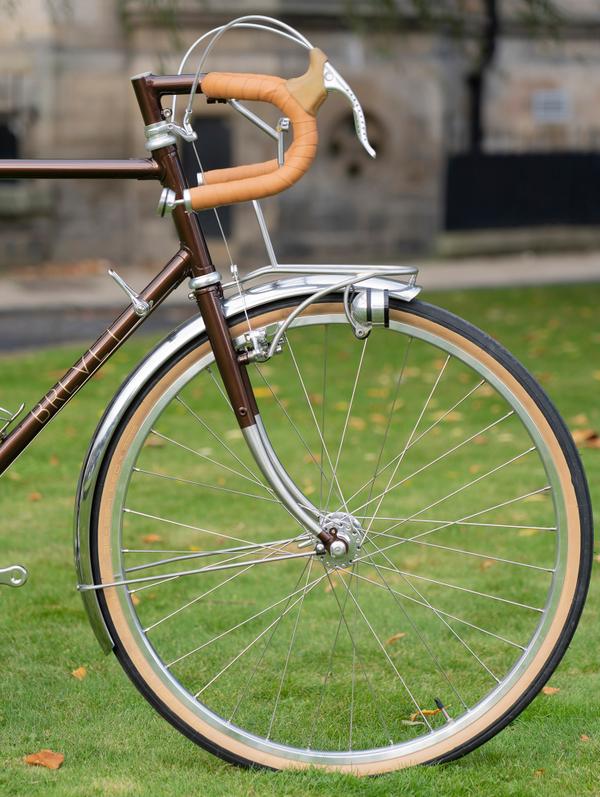 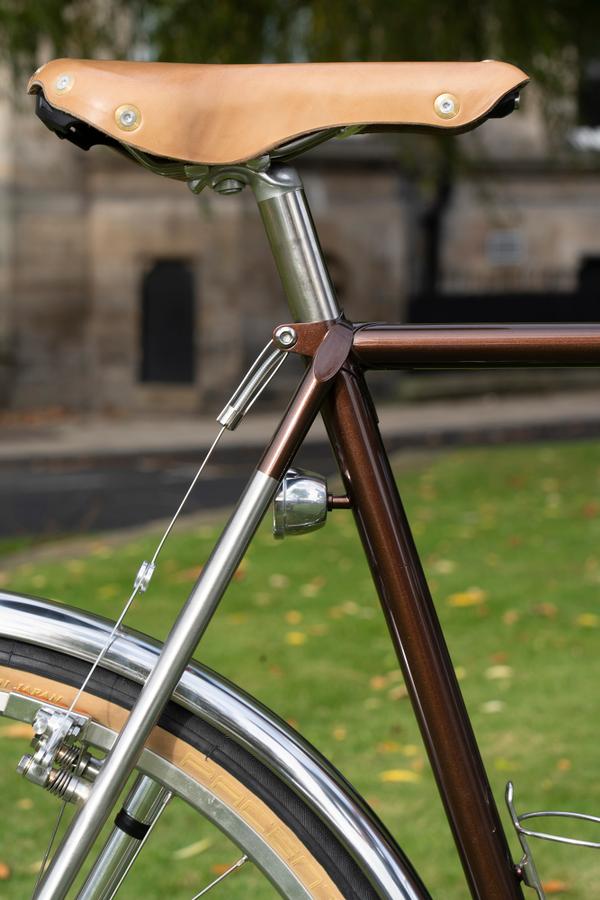 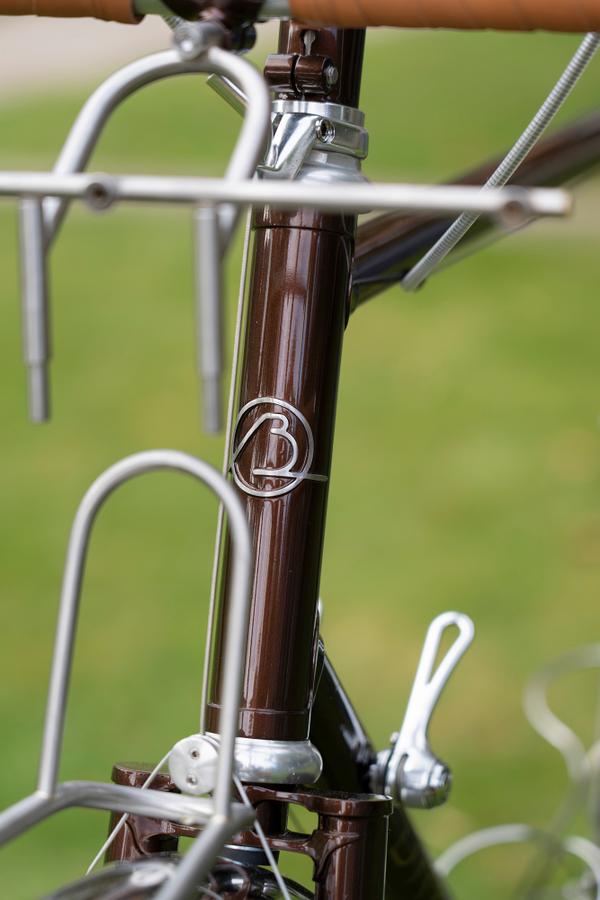 Sebastian also sat on a panel with Rob Quirk of ‘Quirk’ and Jon Woodroof of ‘Two Tone’ Amsterdam, for a discussion on their different approaches to long-distance cycling. Their intimate accounts of using cut-down toothbrushes and being nibbled by foxes were also a highlight of the show. Italian-based ‘Cybro Industries’ were, due to travel restrictions, etc. one of relatively few European builders this year. Their energy was infectious. This year’s show was exciting for Cybro, having visited in 2014 on their first day working for legendary builder Dario Peggoreti, this was their first year exhibiting their own designs. Cybro presented a number of frames only, on flight cases doubled up as plinths, most of which were made with carbon tubes bonded into machined aluminium lugs. “Why do you build them like this?” I asked. “Because look at it! It’s so cool! Because we can!”. 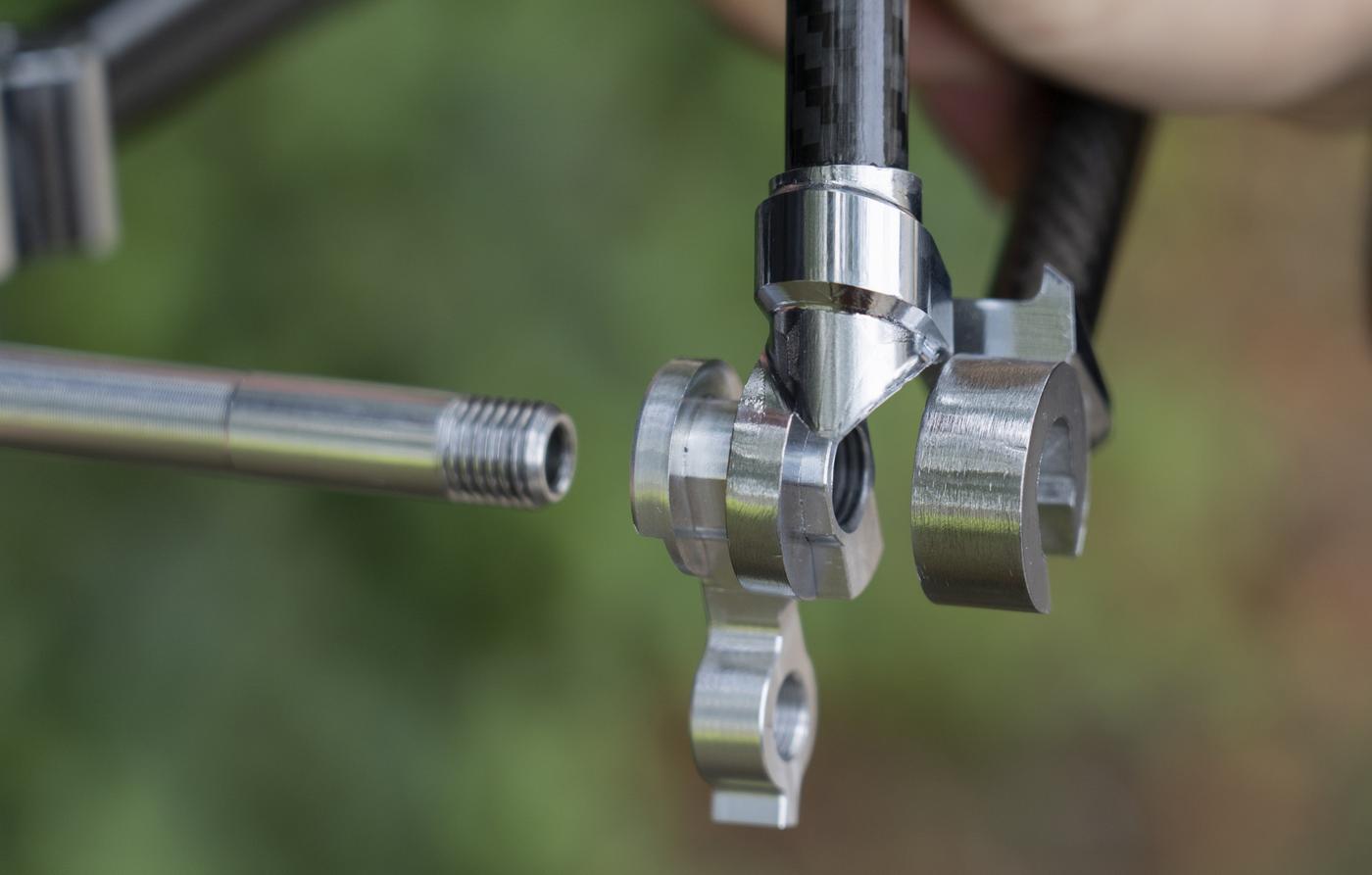 It’s exciting to spend time with enthusiasts which made Cybro great fun to hang out with. Beyond that, all of their frames featured a split dropout on the drive side that breaks down, by removing the through axel so the frame can be used with a ‘Gates’ carbon belt drive. Separately to the frames, their complex external lugs were beautifully made and more considered than they outwardly appeared, or than their responses to my line of questioning would suggest. I’d seen the European bike project frame that they made online before the show, which looked cool but nothing to write home about, but spending a bit of time with the most enthusiastic crew anyone could hope for made it all make sense. 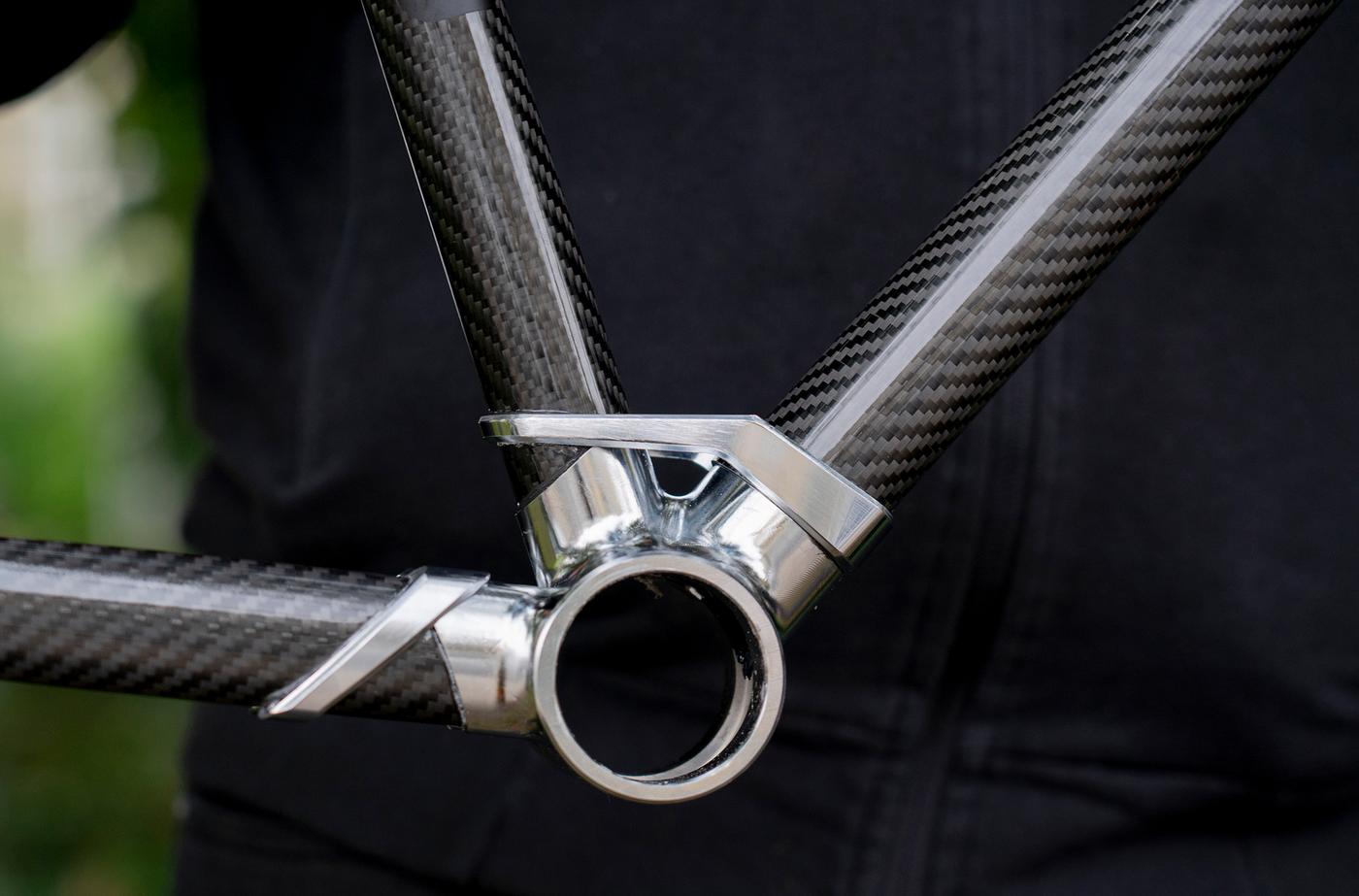 While a bit shiny for my current tastes, Cybro makes unique and pretty eccentric bikes that a younger, fitter me would have crapped their pants over. I’m stoked to have made some new friends and I’m excited to see what they bring to next year’s show. At the opposite end of the spectrum perhaps the most extreme and least understated bike at the show sat on the York-based ‘Feather Cycles’ stand. A custom TT bike for a long-standing customer. The first standout was that it was a TT bike – TT bikes seem to be pretty out of vogue at bike shows and TT bike design doesn’t inherently lend its self to steel which is the material of choice for the majority of builders. It’s a shame because they offer such scope for radical design while fitting into a super prescriptive package. 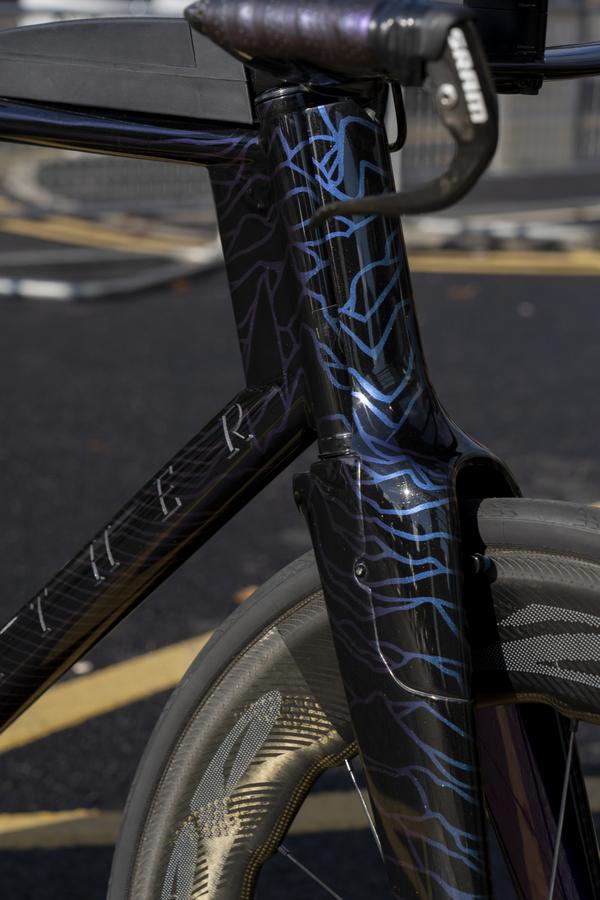 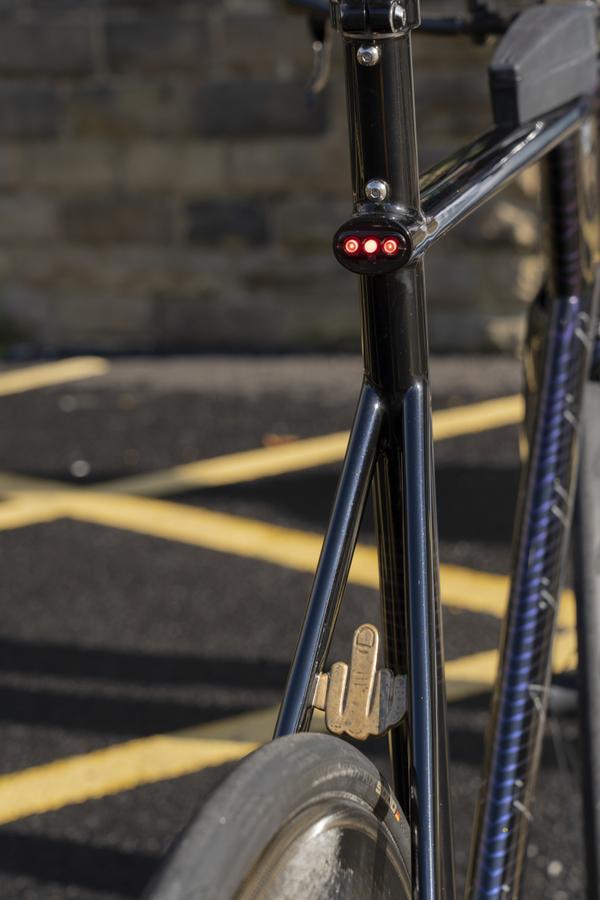 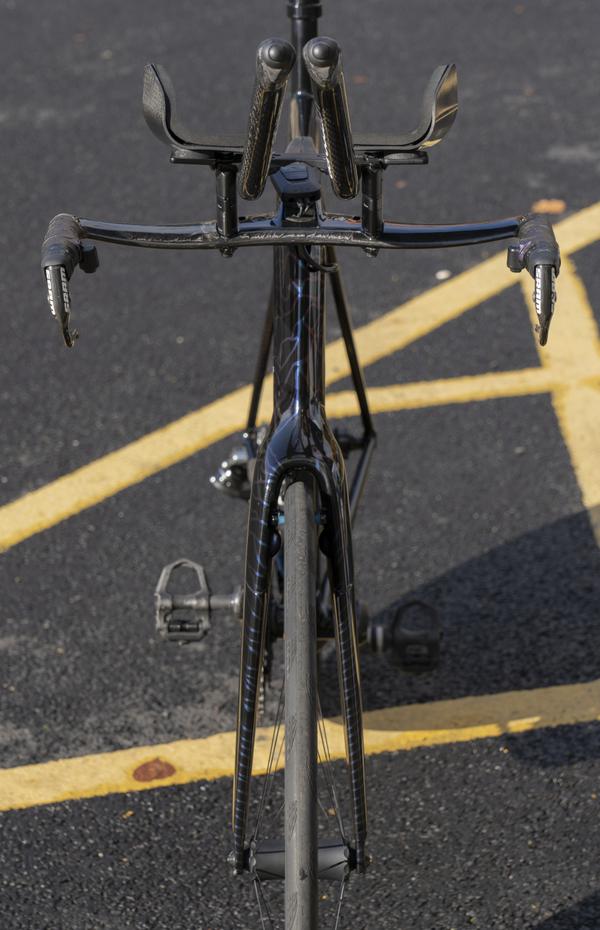 They can be a lot of fun! The next standout was the little plaque next to the bike, with some words written by the customer who had commissioned it. “In hindsight, a eulogy to my late brother, Simon, and an urn full of ashes were unusual items to approach a frame builder with, but after losing my brother I wanted to create a tribute to him to have with me always on my long solo rides” later in the print off “my first ride was just perfect, a 100 mile solo with just me and my brother and Joy Division in my headphones – I wouldn’t go back to a carbon TT bike” There’s a lot of trust in a builder having something made that’s so deeply personal as a bicycle, the level of trust inherent in this particular bike is off the chart. The frame was painted by Jack Kingston, and in the (flawless and definitely too shiny to be real) paint are Simon’s ashes. In this respect, I can’t see a bike being more personal or more bespoke. That said, there are loads more highly personal standout details on this bike, from the integrated lights with a handmade infinity symbol switch to the highly un-aero brass middle finger seat stay bridge. There was one other standout TT bike at the show, which was on the Barnoldswick-based Hope booth. Hope are best known for their hydraulic brakes and general aluminium component wizardry. Hope was exhibiting three bikes, all made entirely in-house. Their groundbreaking Olympic track frame, complete with UCI chalk paint scribbled notes, a TT bike of similar design, and their new HB130. They also had half a frame in its mould, mid layup. For a company so well known for its aluminium parts, Hope’s carbon frames, which are all made entirely in-house in Barnoldswick, are pretty flipping incredible. 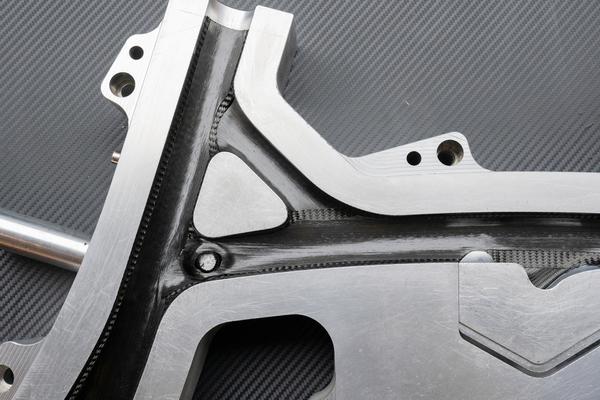 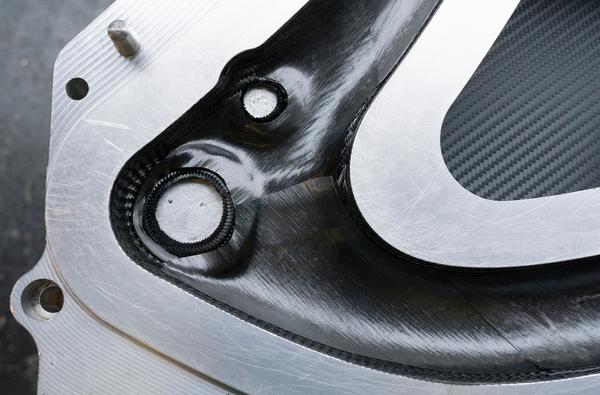 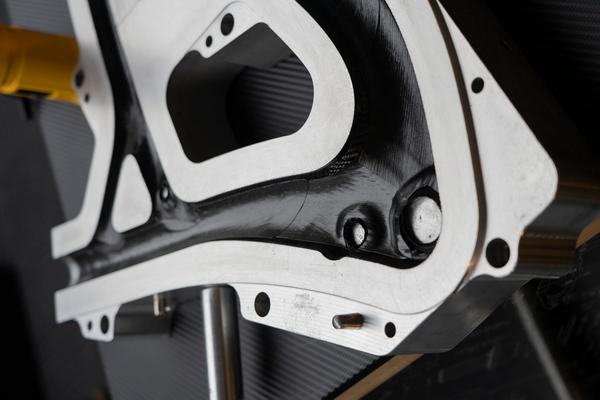 Aesthetically they speak of the process that made them, made in two halves in CNC machined moulds, and glued together with no extraneous finishing. Under close inspection, you can see the most subtle hints of the moulds machining texture. The lack of finishing highlights the care and precision employed in each frames manufacture. The weave of the structural external layer of carbon matches up between the two halves like the back of one of Garry Fisher’s Saville Row suits. It doesn’t need to, but it does. The monocoque mainframe doesn’t look at all incongruous with the machined aluminium rear swingarm yolk, with bonded UD square carbon tubes. Only the disk rotors pop in Hope racing green, along with the ‘Ohlin’s’ shocks. I guess all three of the bikes on the Hope stand would be considered “superbikes”, whatever that means? It’s also pretty weird to talk about something that’s essentially a highly precision-made and expertly designed functional machine in terms of the way it looks, rather than the way it performs. But it’s a bike show rather than a review or a ride, and it’s always exciting to be shown something cool. You don’t visit a museum to buy a mummy, and I’ll probably never own a HB130, and if I did, I wouldn’t know what to do with it! Scenes from the Show

More than a bike show this year, it was just great catching up with friends and feeling like part of a community again. Making things in isolation is fine, but to grow, there needs to be a cycle of making and showing. There’s an amount builders can show work on social media but there’s equally an amount that pictures with captions can’t replace understanding an object in real life. How the light catches it, how it feels to touch or even just understanding scale. 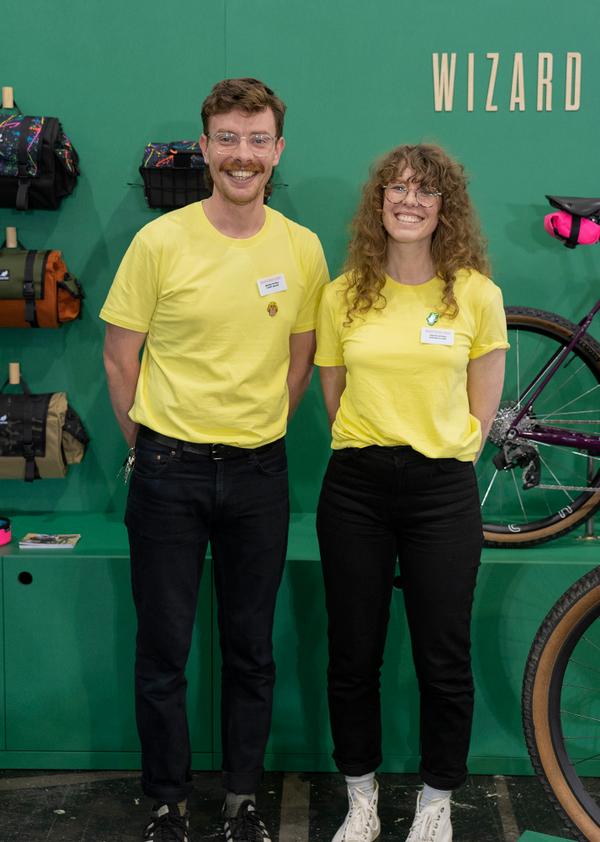 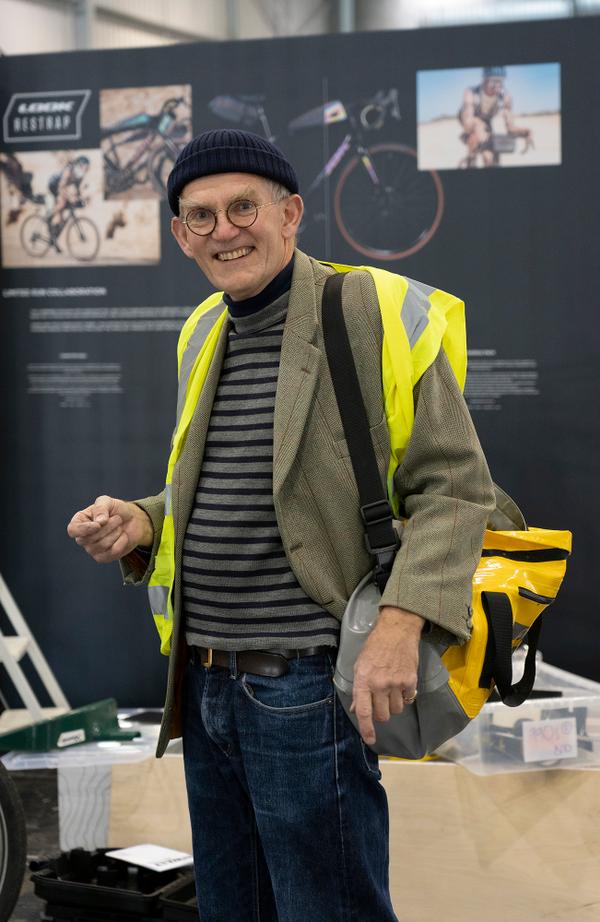 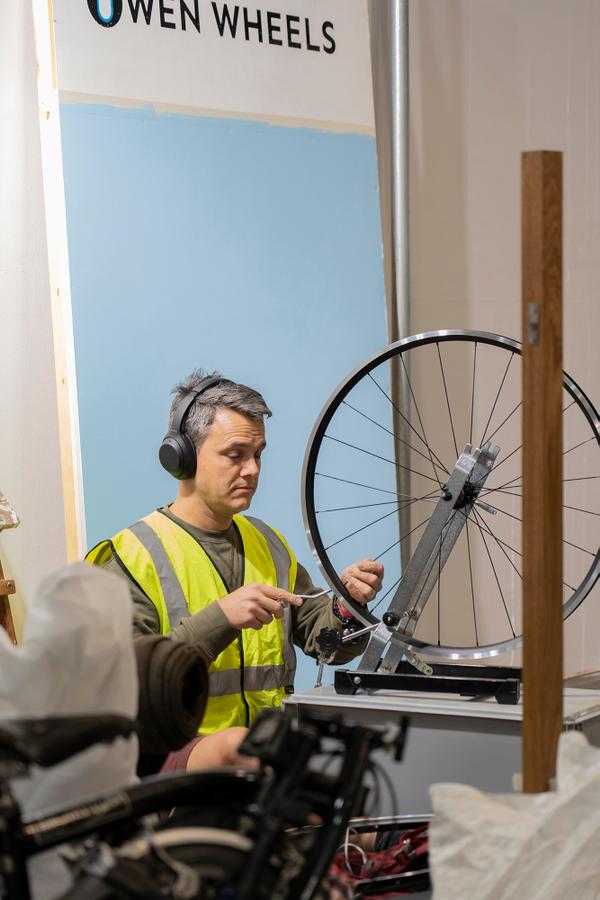 Most of all handmade bicycles are immensely personal things which represent stories and ideas that aren’t always on show in plain sight, the only way to understand them fully is through the people that make them. No description has the same visceral effect as the steady progression from self-conscious, wry smile, growing to full blown belly laughter on a grown man’s face having emptied his lungs into a ‘Chatter-Lea’ safety whistle. Bespoked this year, was great for being a reunion, a platform for checking in, and a chance to see an incredible and varied body of work from a selection some of the most interesting artisans and manufacturers around.