With cooler temps approaching, I really wanted to circle back around to our late spring trip to Sedona. Colin and I bugged out for a bit, camping just outside of town, riding bikes, 4-wheeling, and enjoying the local cuisine. While this isn’t necessarily a “Guide to Sedona” nor will it dive into history, both colonial and indigenous, it is meant to spark a desire to ride in this veritable mountain bike theme park.

At this point, I had been in Arizona for a few weeks, spending the previous time at Overland Expo with my friends from Go Fast Campers and then attending a press camp with REI for their new Co-OP full suspension mountain bikes. Normally, I get homesick after being on the road for so long and like to get home to my partner, our dog, and other responsibilities but the thing is, it had been raining in Sedona and the resulting dirt was what we came to call Red Velcro. Colin drove up from Los Angeles as a day-long rainstorm settled over northern Arizona. It was a little late in the year for such a deluge. Meanwhile, back in Flagstaff, thousands of feet higher in elevation, they were dealing with one last snowstorm. This unfortunate weather event put a dampener on riding or even hiking for that afternoon, but Sedona offers much more activities, including four-wheeling. 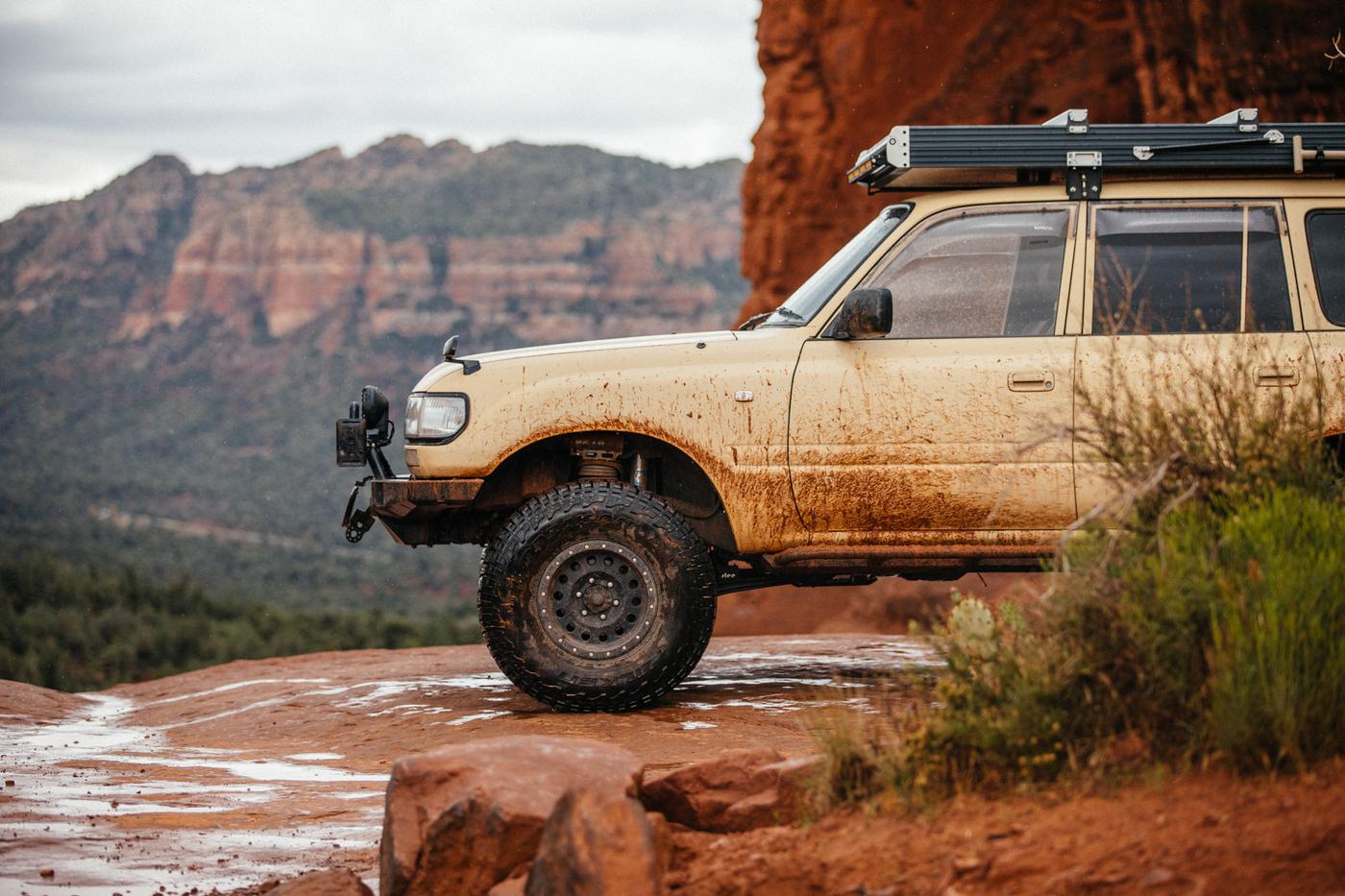 Located in the back of a sleepy neighborhood and inside the Coconino National Forest, Broken Arrow Trail, also referred to as NF125, is co-sponsored by the Pink Jeep Tours, an adventure company that has outfit these pink jeeps with multiple seating options to carry curious tourists around Sedona’s scenic byways. Part of this sponsorship agreement is that Pink Jeep Tours will build and maintain sustainable four-wheel-drive trails in the area, one of which being Broken Arrow. 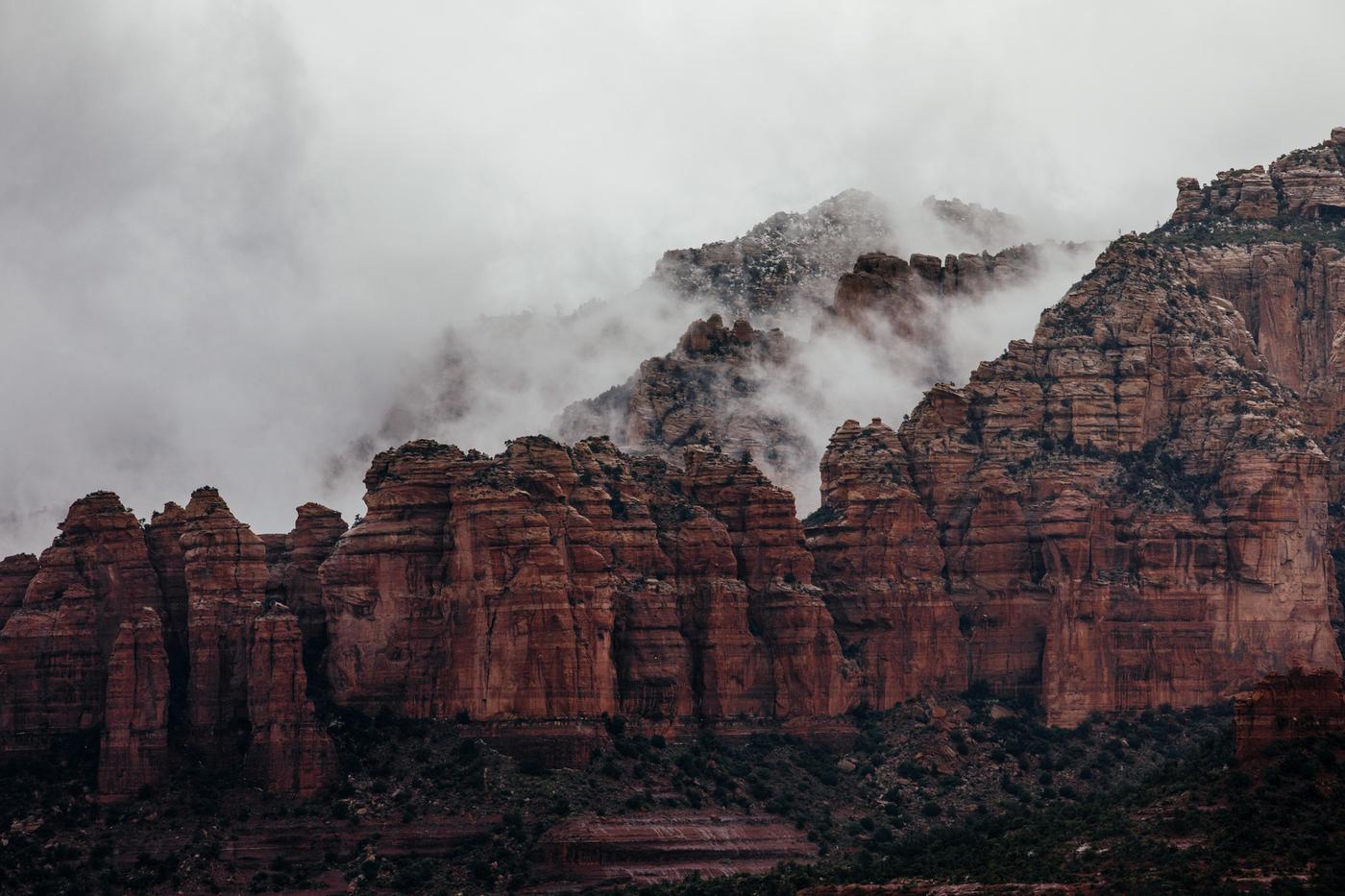 While the hiking and biking trails in the same zone are not to be ridden in the rain, Broken Arrow’s 4×4 trail is filled with slickrock and pavers, minimizing mud imprints. The Jeep tours continue all day, from sunrise to sunset, rain or shine, 7-days a week. For such heavy traffic on a trail surrounded by cryptobiotic soil, fragile desert flora, and beautiful evergreens, the impact is hardly visible at all. It’s a perfect example of when the NFS works with a private company that actually cares about the land. Colin had never been on a real 4×4 trail, so we aired the tires down on the Cruiser, took the bikes off, and headed into the trail. Now, you could drive this trail in a stock 4×4, but a few sections will be tricky. The most important thing to do is to take some air out of your tires. Kinda like a MTB. Having just aired down and put it in 4Low, we took off through the myriad of piñon trees and red slickrock as the rain continued to fall. Briefly stopping at Chicken Point, where you can hike up to “White Line,” the infamous trail with high consequences. Colin hiked up in his Crocs to check it out, as I shot landscapes of the rain and snow. We hopped back in the Cruiser and began crawling up vertical slickrock waterfalls and taking on the over-sensationalized “Devil’s Staircase,” we finished the loop and headed back to the parking lot where our bikes were locked up to a post.

Finding camp, just a few miles outside of town, we crossed our fingers that the morning would bring sunshine. In terms of trails that are more weather-friendly, the zone behind Red Rock High School is one of the fastest-draining networks in Sedona. It can rain in the morning and be ridable in the afternoon. It’s one of the only trail networks in Sedona where this is possible. To be sure you’re not going to damage trails, check with the local shops. Most of the shops are active in the trail building and maintenance teams and they’ll steer you in the right direction. It’s how I found out about these trails. It had rained all night and all morning, so we headed into town and did a bit of work until these trails had drained properly and boy, had we lucked out. The crapshoot that is spring weather in the high desert had fallen in our favor. The trails were completely ridable and dry, with tacky, red soil hugging corners between agave, opuntia, and juniper trees. The clouds and light played games on Cathedral Rock, making for some epic photography opportunities. Scorpion, named after the Red Rock High School mascot, is a moderate trail and Pyramid is a more technical off-shoot. If you’re comfortable with exposure and drops, it’ll be a walk in the park, especially when compared to Hangover trail.

The whole loop is under 5 miles and takes about an hour. One of the most popular difficult trail loops in the area is Slim Shady to Hiline and rightfully so. Bench cut, exposed trails climb up on top of a massive mesa, only to drop down through drainage and rollover chunky alluvium. It’s a loop that embodies the life of a mountain goat. If there’s a trail to do some serious bodily injury to, it’ll be Hiline. The last descent back down to town is one that requires a cool demeanor and it helps to follow someone’s line who has ridden it before. It had been years since I rode it – the first time being on a hardtail – so returning with a Pivot Mach 6 was delectable. If you take our route, you’re looking at a 13-mile loop with around 1500′ elevation. Oh and we saw a beautiful blacktail rattlesnake (Crotalus molossus)! 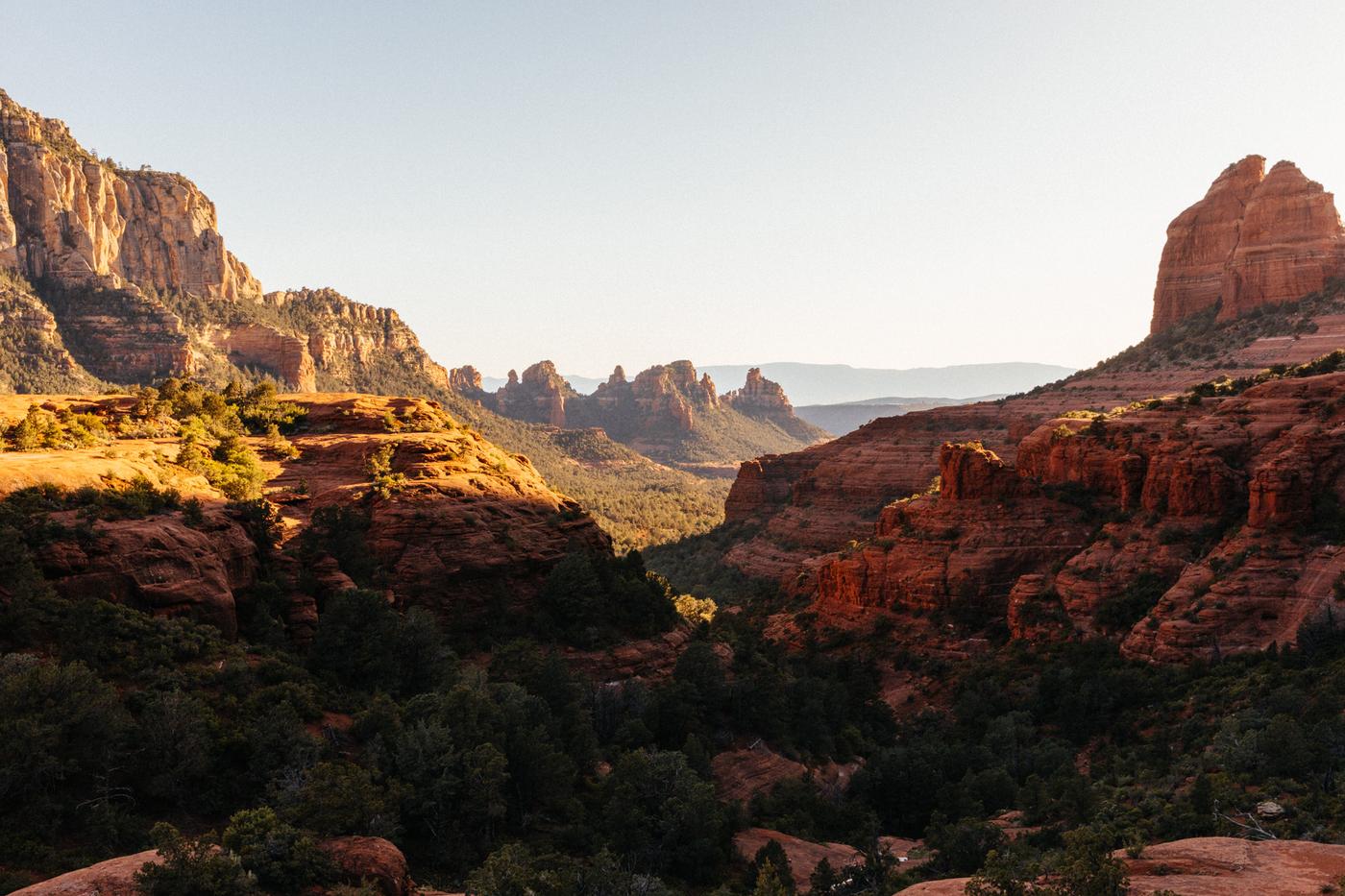 If there is one trail in Sedona cloaked in local infamy it’s Hangover. Even hiking this trail will evoke vertigo in many people, much less dropping down the near-vertical sections on a bike, on the side of a cliff. We opted to spend sunset up on Hangover on the last afternoon of our trip and it was one of the most beautiful times I’ve spent in the area. I don’t want to go into this trail’s experience too much because it’s something you should really go out and try it for yourself… This is a 5-mile ride that you will never forget. Sedona is a place that has something for everyone. Even if your friends aren’t into MTB riding, there are places to 4WD, to hike, to trail run, and even yoga adjacent to many of the local vortexes – something we won’t be touching on here. The dining is exceptional, with plenty of affordable options. Be it for a weekend or a whole week, you could get in plenty of riding, and still barely scratch the sandstone surface. Hopefully, this gallery inspires you to get out there and take on some of these beautiful, yet challenging trails.