Featuring five inches of suspension travel courtesy of flexy titanium and a wild, never-before realized linkage fork, the Ibis Bow Ti was an iconic “full suspension” bike of the 90s. Today we feature this bike with a deep dive into what makes it so unique with words by Tasshi Dennis of The Vintage MTB Workshop. Let’s check it out below! 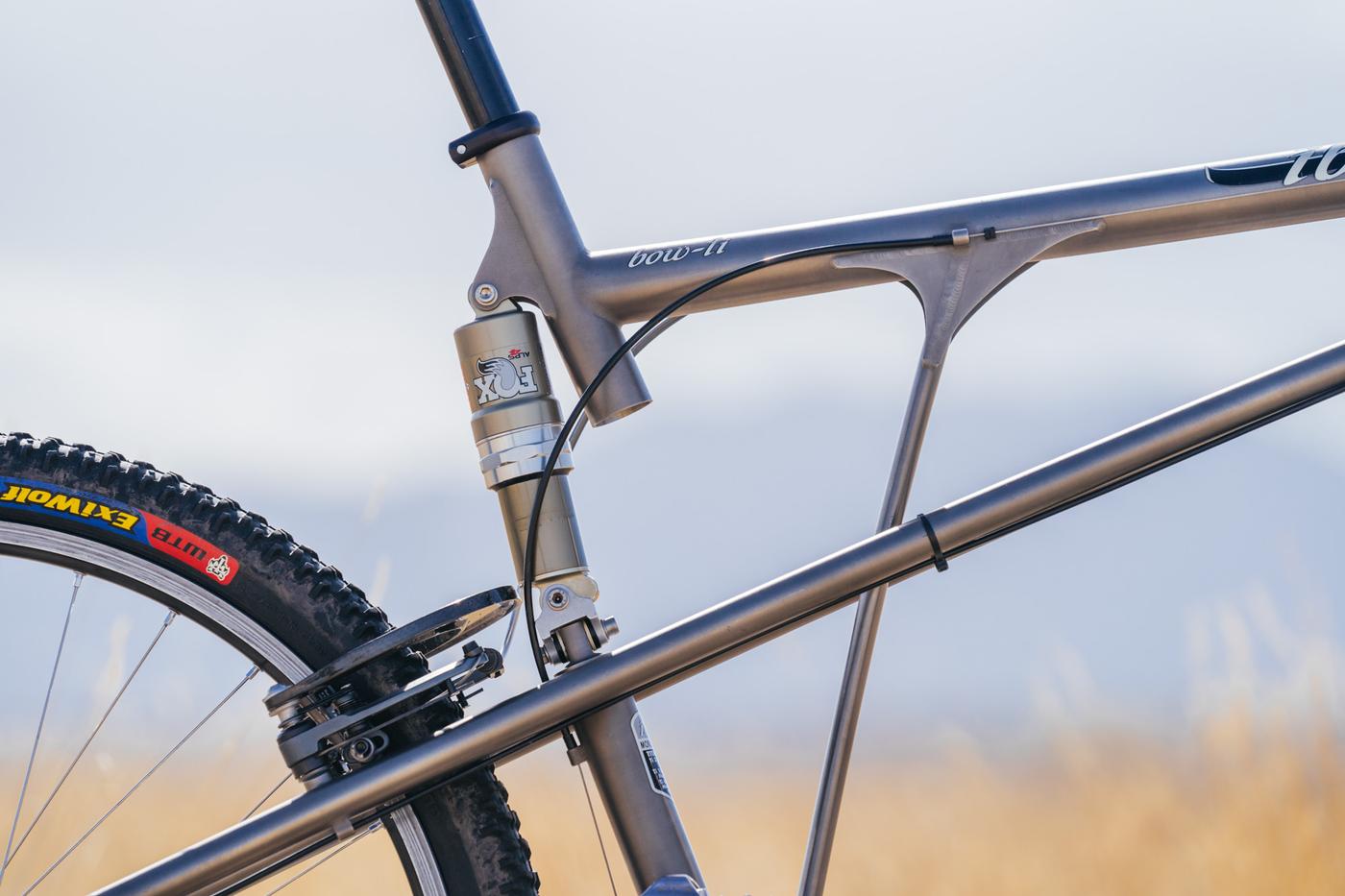 The Roots of Full Suspension

We take for granted that today’s full suspension mountain bike designs work well on a huge range of terrain, from steep technical climbs to bombing descents where the wheels hardly touch the ground. It’s been narrowed down to a handful of proven linkage designs that can be tweaked. From model year to model year, to fine-tune rear axle paths, and bottoming characteristics. Not to mention very sophisticated forks and shocks with adjustable valving that seem to take care of anything else the linkages cannot.

However, that was far from the case 25 years ago when suspension designers were still trying to figure out how we ride and what the suspension needed to do beyond absorbing the biggest hits on a downhill with up to 80mm of travel. That left riders with the seemingly endless search for better suspension and the burden of paying top dollar for bikes that could best be described as “still experimental.” The Ibis Bow Ti was a bike that promised a lot, and not just because it looked like nothing else. 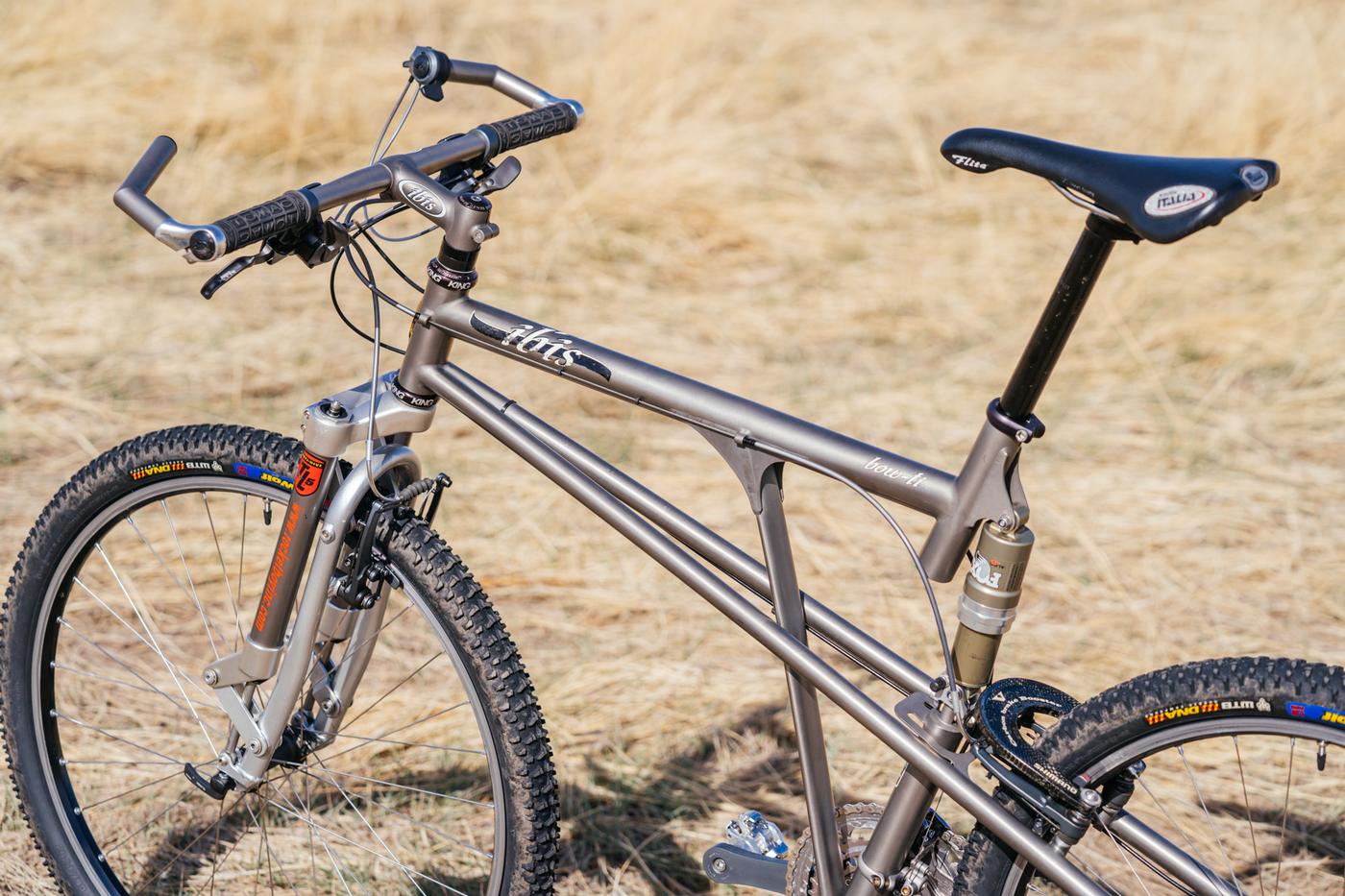 Coming from the innovative mind of engineer John Castellano, the Ibis Bow Ti was a pivotless suspension design that relied on the natural flex of titanium to achieve 5 inches of rear wheel travel. The Bow Ti was a clever implementation of John’s previous frame design, the aluminum Ibis Szazbo, which relied on a single ball bearing pivot in the middle of the frame. At the time, both bikes fit in the trendy category of unified rear triangle (URT) suspension. Other notable examples are the Trek Y-Bike, the Fisher Joshua, the Klein Mantra, and the Schwinn URTs for which John was also involved.

John patented his “Sweet Spot” concept to specify exactly where the pivot was located on the frame to best have the suspension activated by the weight of the rider while seated during a downhill. By contrast, while standing and pedaling out of the saddle the suspension would stiffen up like a hardtail. While it is completely opposite of how we think of suspension today, with a stable pedaling platform while seated, it was the logical path of transition that needed to be taken by the mountain bike community for which the vast majority had been riding hardtails or full-rigid bikes. 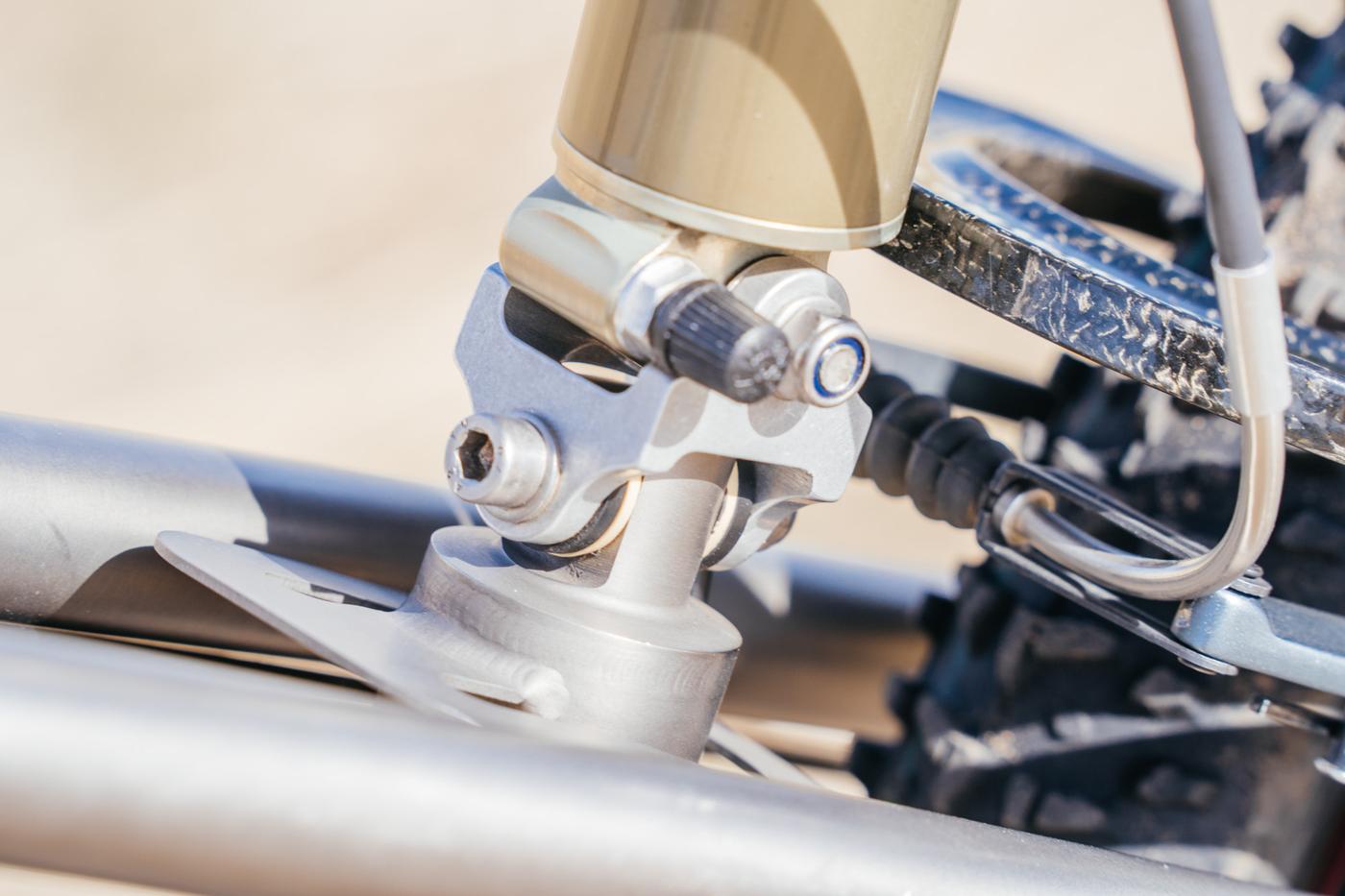 So, how does one achieve five inches of travel with only some minor pivots on the ends of the rear shock? The frame is based on twin stays which extend from the head tube to the rear dropouts that act as long leaf springs. That alone would result in tremendous lateral flex, so the stays are attached to each other and the lower shock mount with a thin titanium plate. Despite this, the seat tube still swings side to side under pedaling loads, which would put undue loads on the shock and cause it to fail prematurely. To compensate, a two-way pivot or universal joint is attached to the bottom of the shock. In action, the suspension sees all parts of the frame moving relative to each other to create the “Sweet Spot” pivot. The lesson here is pivotless doesn’t necessarily mean simpler. 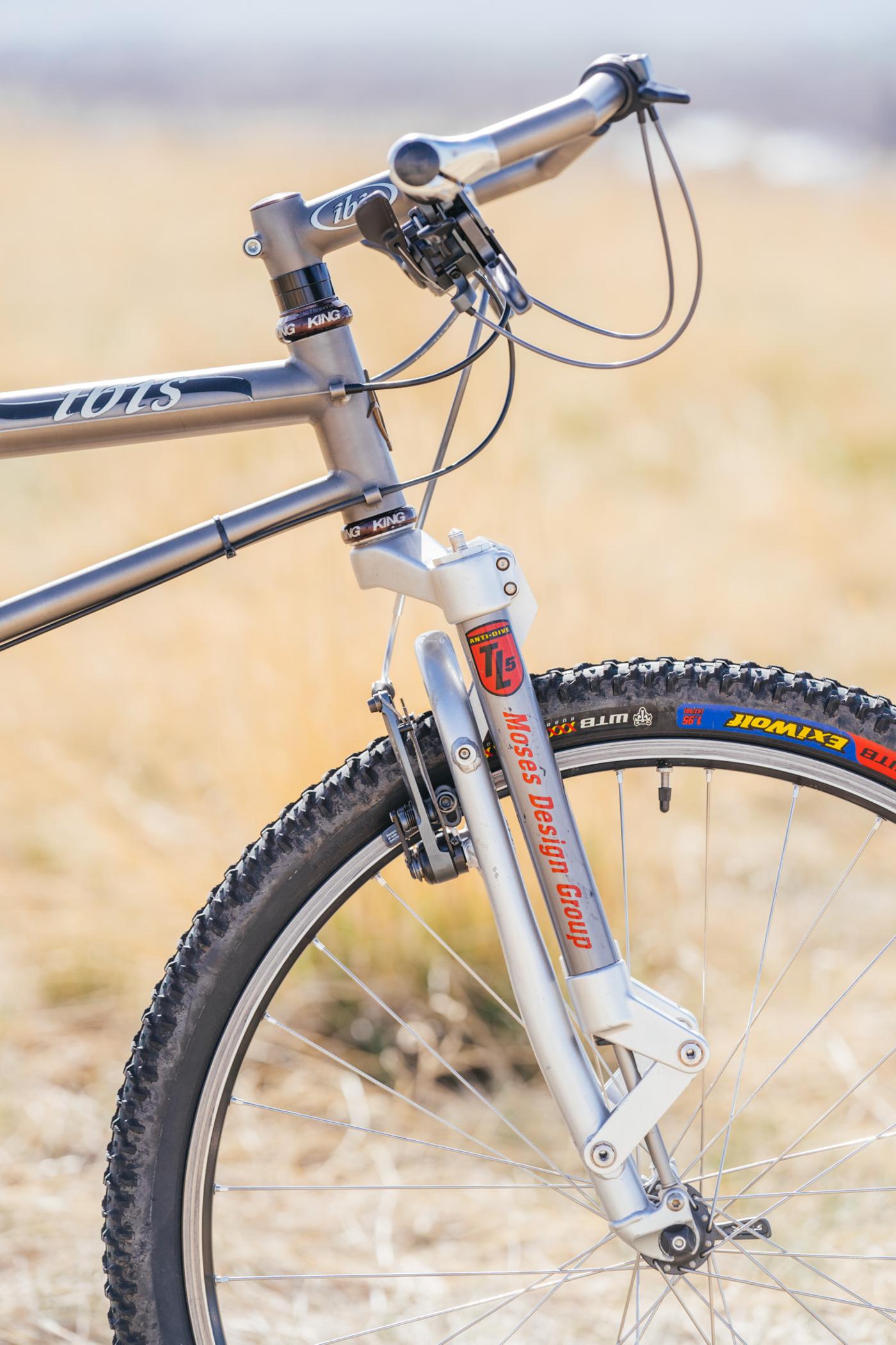 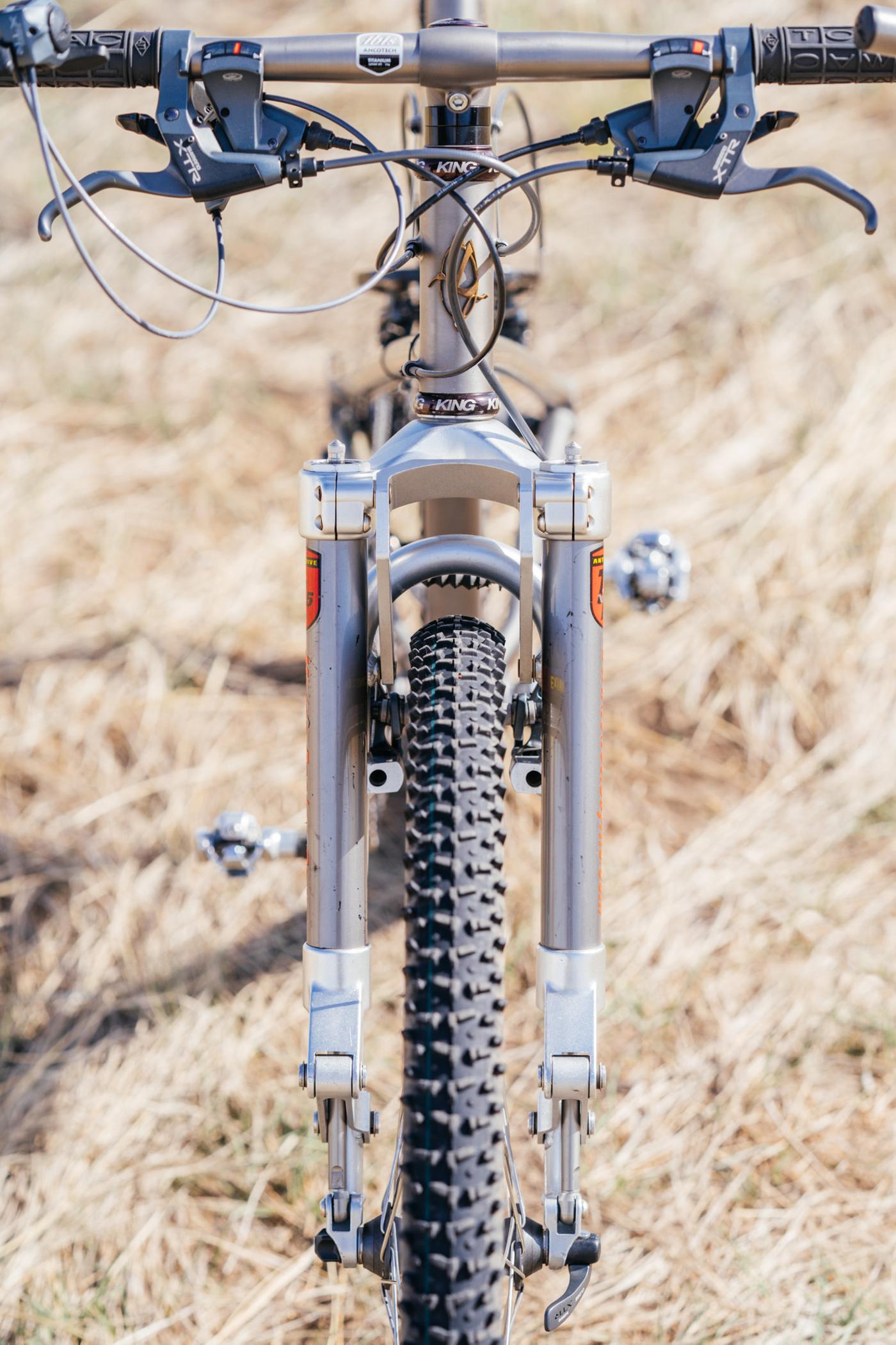 So, what’s going on with that front fork? If the rear suspension is based on a “pivotless” suspension concept, the Interlock Racing Design fork is the exact opposite.

The TL-5 or Trailing Link with five pivots (that’s per fork leg!) results in several inches of travel from a total of 10 pivot points. The trailing linkage is meant to respond to frontal impacts by swinging backward and up rather than being constrained to the linear motion of a telescopic fork. In addition, this axle path better matches the wheel path of most rear suspension designs. Under hard braking, the design also has an anti-dive characteristic because the braking forces on the back side of the fork tend to extend rather than compress the suspension. 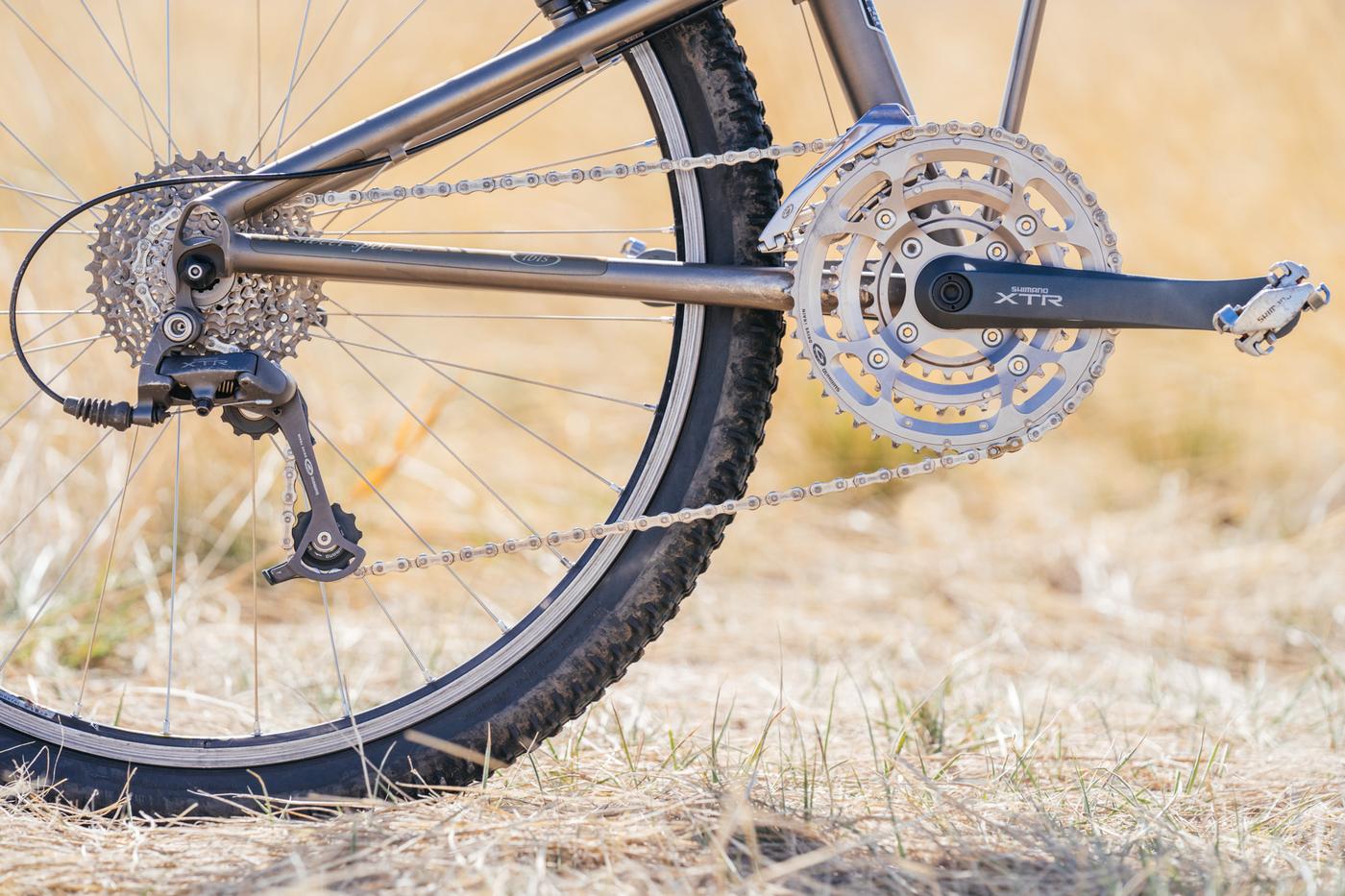 9-Speed and Other Innovations

This Bow Ti is built up with a full 9-speed Shimano XTR group from an era when component groups were still largely designed independent of the type of mountain bike. There were two exceptions at the time: Shimano made a single ring, downhill version of the XTR crankset, and for the cross-country racers they offered the remote shifter as seen on this bike. The remote shifter added a couple of rear shifting paddles to the end of a right-side barend for convenience during extended climbing. Soon after this bar-ends would largely disappear from use.

In a modern world of ultra-stiff carbon frames with buttery suspension, the ride of the Bow Ti stands out as unique. It takes a while to get used to so much lateral flex and the frame moving all over the place like a rubber band, but eventually you can gather your own rhythm and make it work for you and the terrain. It doesn’t hurt that the complete bike weighs 24 pounds. With an original frame-only cost of $3,500, the Ibis Bow Ti was one of the most expensive bikes available at the time, and they required an elaborate construction process. To this day, the Bow Ti remains one of the most talked about dream bikes from the highly innovative full-suspension era. 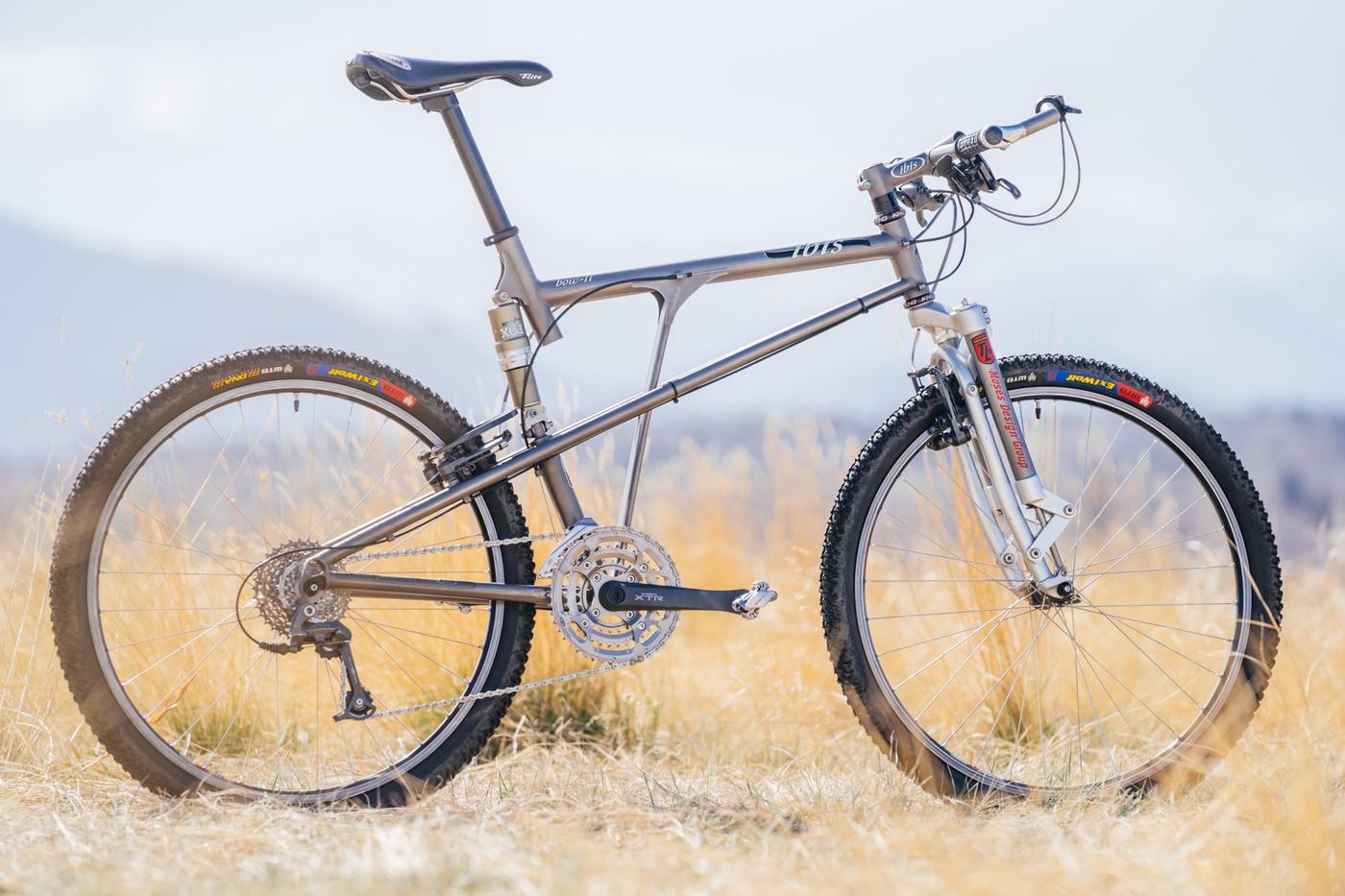