The Denali Highway is often referred to as one of the loneliest roads in America. It’s a bumpy, and inconvenient road that spans more than 130 miles, mostly above treeline, along the Alaskan Range. I visited the Denali Highway for a brief time years ago and that visit stuck with me. I knew I had to go back and this past summer, with my husband and a small group of friends, we did.

As cyclists, perhaps it’s our nature to see a road and want to ride it. This specific dirt road lives just outside of one of the most famous national parks in the world, and while many confuse it as the road to the park, it no longer serves that purpose. It’s host to grizzly bears, caribou, ptarmigans, and moose. It’s old, it takes a while to get to, and even longer to drive across. In the winter, the road and almost all of the lodges along it succumb to ice and snow, leaving a very small window of summertime when it erupts in color and becomes passable to cars. At about 130 miles from end-to-end, riding its length or close to it seemed just long enough to feel like a tangible challenge to us: consecutive 100+ mile days, on fully loaded bikes, and on a road, we were all curious to see from two wheels. Our ride would be a two-day out and back between the towns of Cantwell and Paxson. I haven’t done much bike touring, and none of us seemed all that excited about tent camping in Grizz country, so we booked lodging along the way.

It seemed like the second we booked our tickets, my husband Aaron, who is also the owner, and visionary at Mosaic Cycles, drafted plans for a new adventure model, The GTX. This was a bike that he’d been scheming in his mind for years: a big-tired gravel bike geared towards adventure riding and touring. Most of our trips present new opportunities for Aaron to design and build our next dream bikes. Lucky me, I just get to ride them. 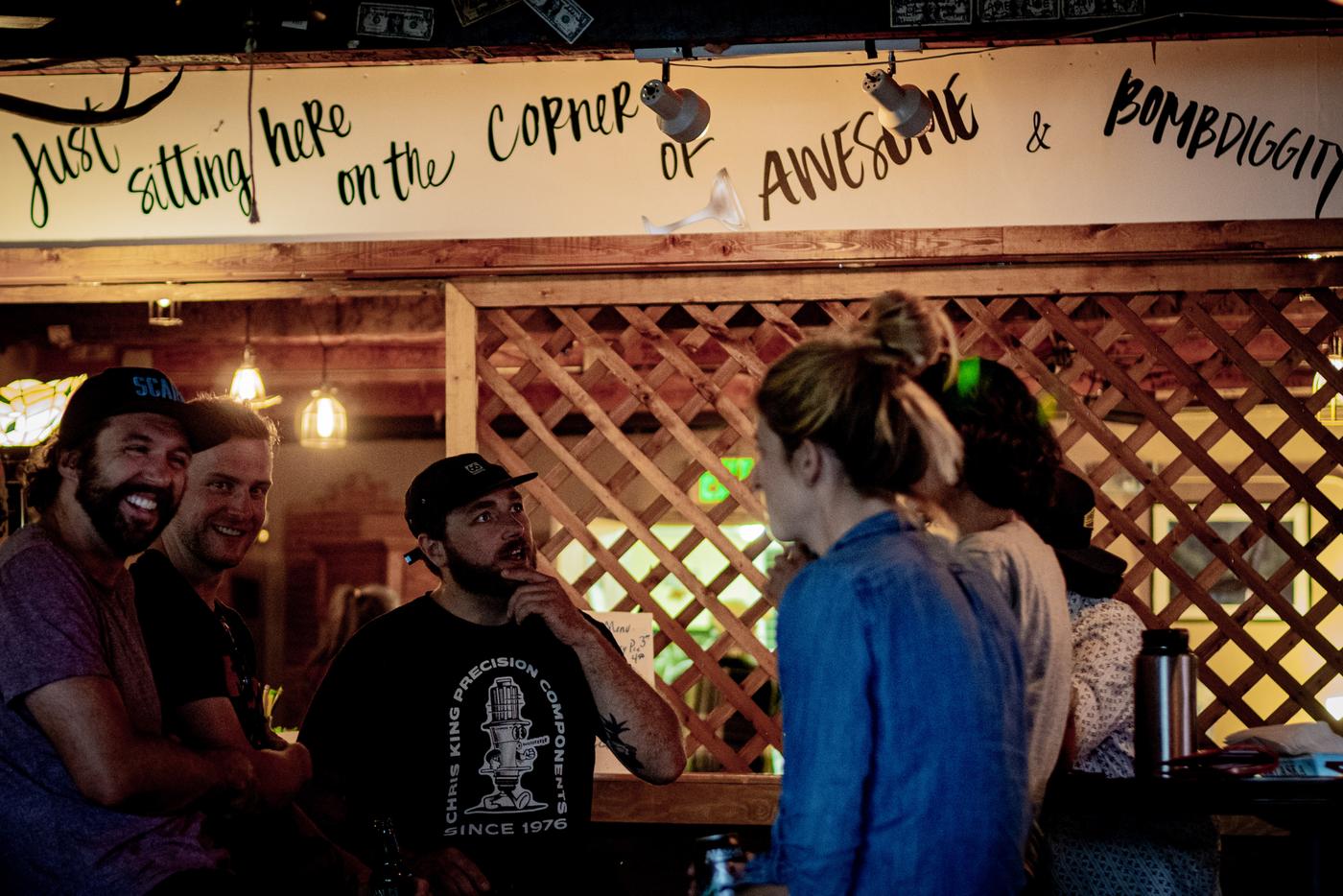 In early July, we stood in a parking lot in Cantwell, AK to meet a few friends before our departure. Kristen, Dani, Zach, Mark, Aaron, and I all had varying setups meant for long days on dirt roads. Cantwell Lodge’s bar served up some of the best fried chicken wings and enough beers on tap. The wood walls were covered in sharpie-scratched messages and old sexist signs about why a gun is better than a woman. We cheered to the unknowns ahead, our bartender was amazed at our plan. 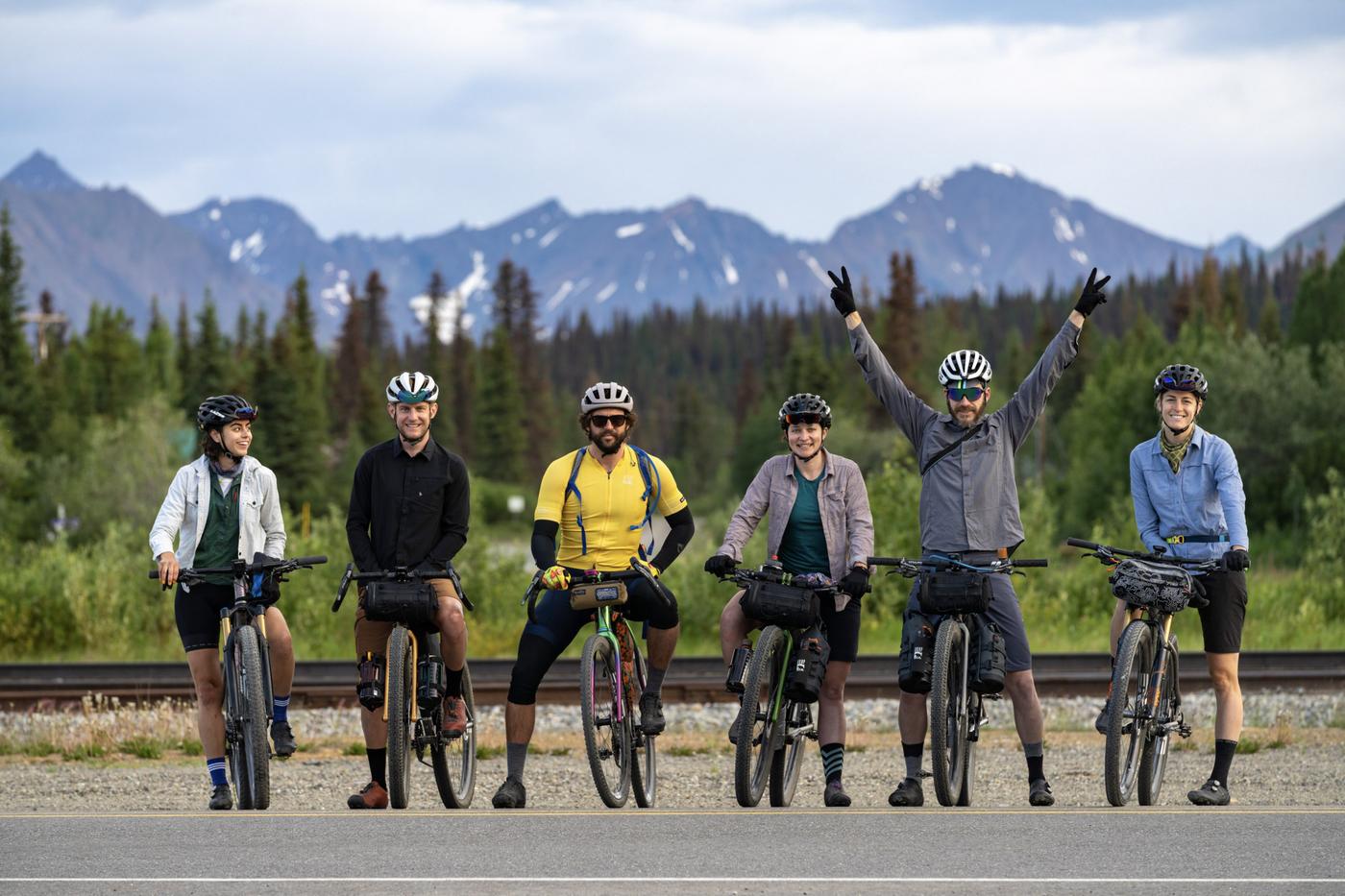 The next morning we started our ride early enough, knowing that it would likely take all day to get to the other end of the road. Sunlight wouldn’t be a concern, we could’ve ridden for 24 hours without experiencing darkness. We rolled out of Cantwell on a paved section for a few miles before it turned to dirt. We lost cell service after we dipped down beyond the first few rolling hills. 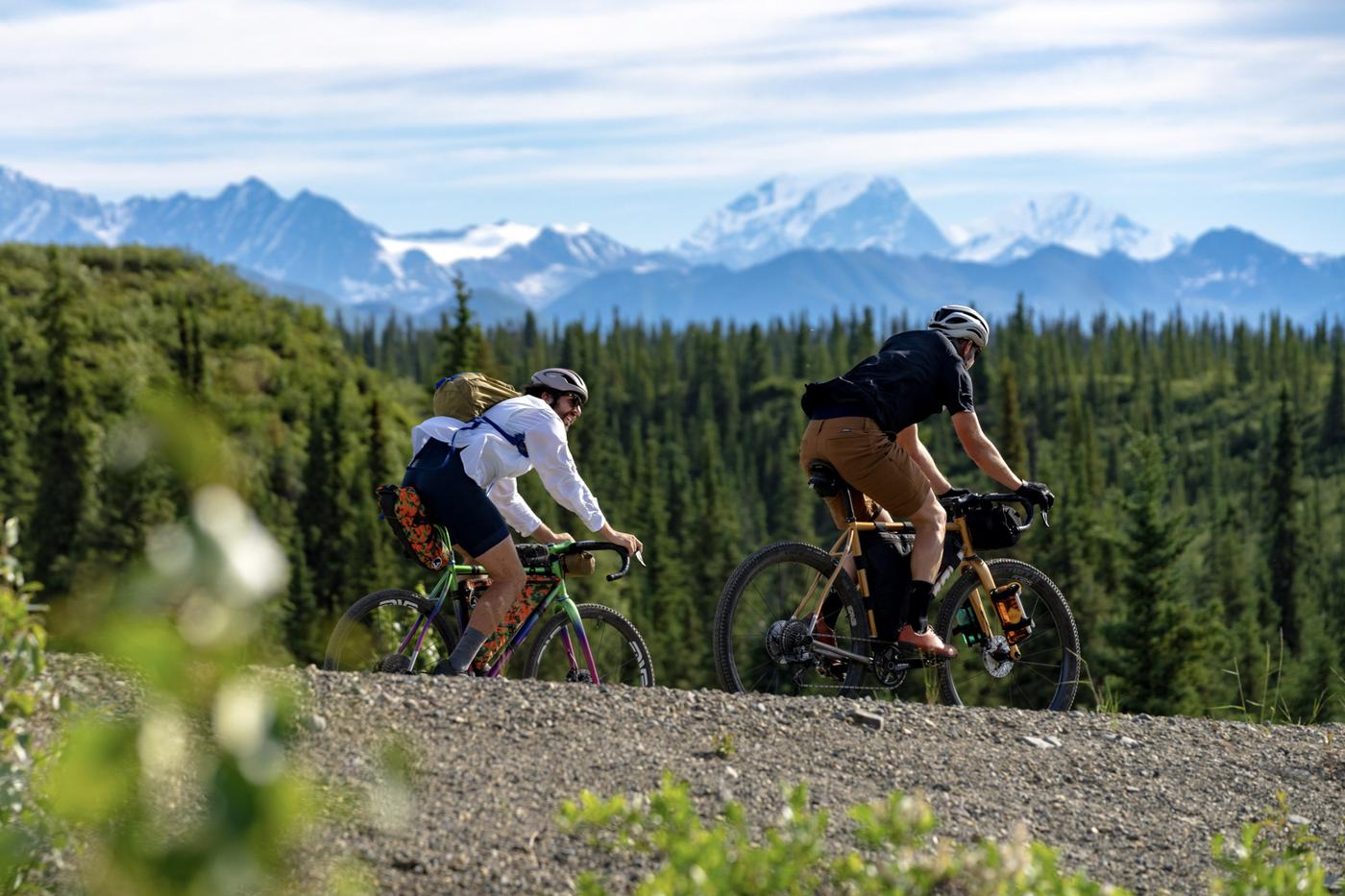 The road crosses a significant amount of water: the Susitna drainage, the Tanana/Yukon drainage, and the Copper River drainage. We’d stop to filter and were quickly swarmed with mosquitos. We all rode with various sleeves and layering options, and when we were moving the bugs didn’t seem to bother us. Most of the day we chattered about life or the scenery or nothing at all, letting the wind whisk by us and kick dirt up from our tires. While I thought that we’d truly be alone out there, the occasional cars whizzed by. Still, there were long stretches of time when we didn’t see anyone. I was consumed most of the time with the possibility of a grizzly bear emerging from the dense bushes. I desperately wanted to see a bear from a safe distance, of course. We did have bear spray velcroed to our forks, just in case. That hope didn’t come true, but a porcupine did waddle across the road early on, and at some point, on the first day, we saw a family of marmots and a few moose too. Our group bungeed apart and together throughout both days. Some moments we were tight and tucked, others we were all spread out fighting our own lonely battles with the persistent headwind, with the chunky loose gravel, or with the growing discomfort of pressure points that long rides on dirt roads seem to sustain. The road never actually enters into the mountains, it only skirts along the edges of the vast wilderness. This was different to us than some of the epic high mountain passes we’ve climbed in our home state of Colorado. As people from Colorado, we think we know the scenery and mountains, but this place is different. It’s unique and jaw-dropping in new ways. 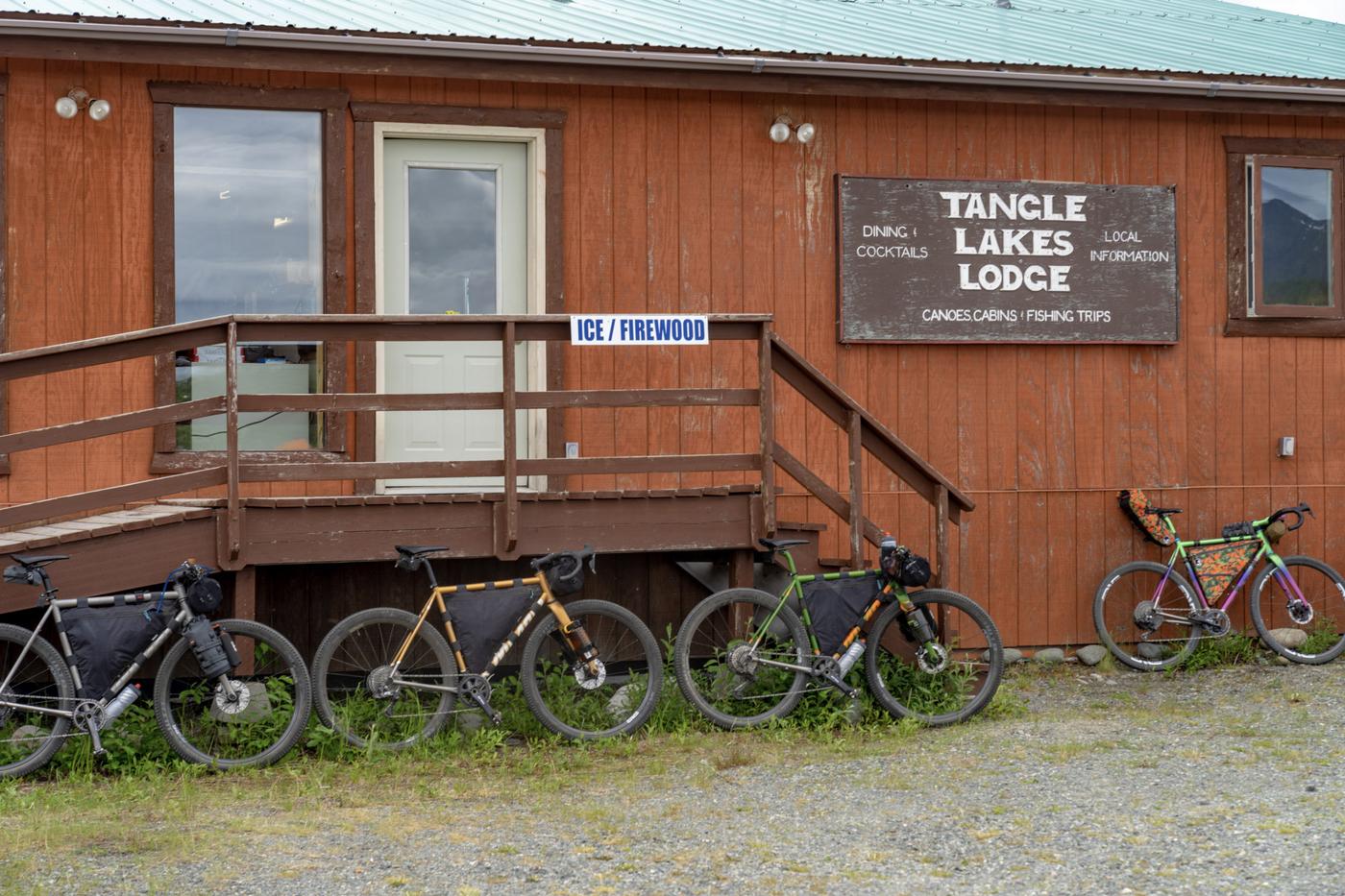 We arrived at the Tangle Lakes Lodge about 115 miles away from Cantwell. It was near dinner time, and we were very excited that the sign outside largely advertised cocktails and pizza. Our host, Emil, helped us get settled in our cabins and arranged for towels and showers. At dinner, we boxed up a large amount of pizza that we’d ordered but couldn’t eat, then asked for cocktails only to find out that they didn’t really have cocktails anymore. We were ready to return to our rooms for the night when Emil emerged with a few bottles from his own personal stash of wine. We sat and drank and told stories, laughing with Emil as he started eating our slices of pizza as if he was on the ride with us. A few lodges open In the summer months along this road, each one boasting a bar or at least a warm coffee to visitors. On our way back to Cantwell, we stopped at the midway point between Paxson and Cantwell at Alpine Creek Lodge, the only lodge that is open all year. Rows of dogs were lazily tucked into their dog houses, resting before their next run. We stopped again at The Sluicebar, further down the road, where dollar bills lining every inside inch of this bar. The hot dogs weren’t all that special but damn, the cold Coors tasted sweet knowing we only had 50 miles left.

By the end of the second day, some of us started struggling as the hills seemed to get longer, the headwinds harsher. Pressure points became pressure aches, and I rotated my positioning between standing and sitting. At the top of a particularly long stretch up, we all stopped to eat pockets of candy and whatever we had left to stomach. A few clouds covered the sun and the temperature became distinctly chilly. I was in pain and ready to be off my bike, but I couldn’t help but wish the moment would last longer. I’ve done enough rides in beautiful places to know that none of these moments last forever. That’s likely the kick that keeps us planning trip after trip to an unknown place and unridden road. 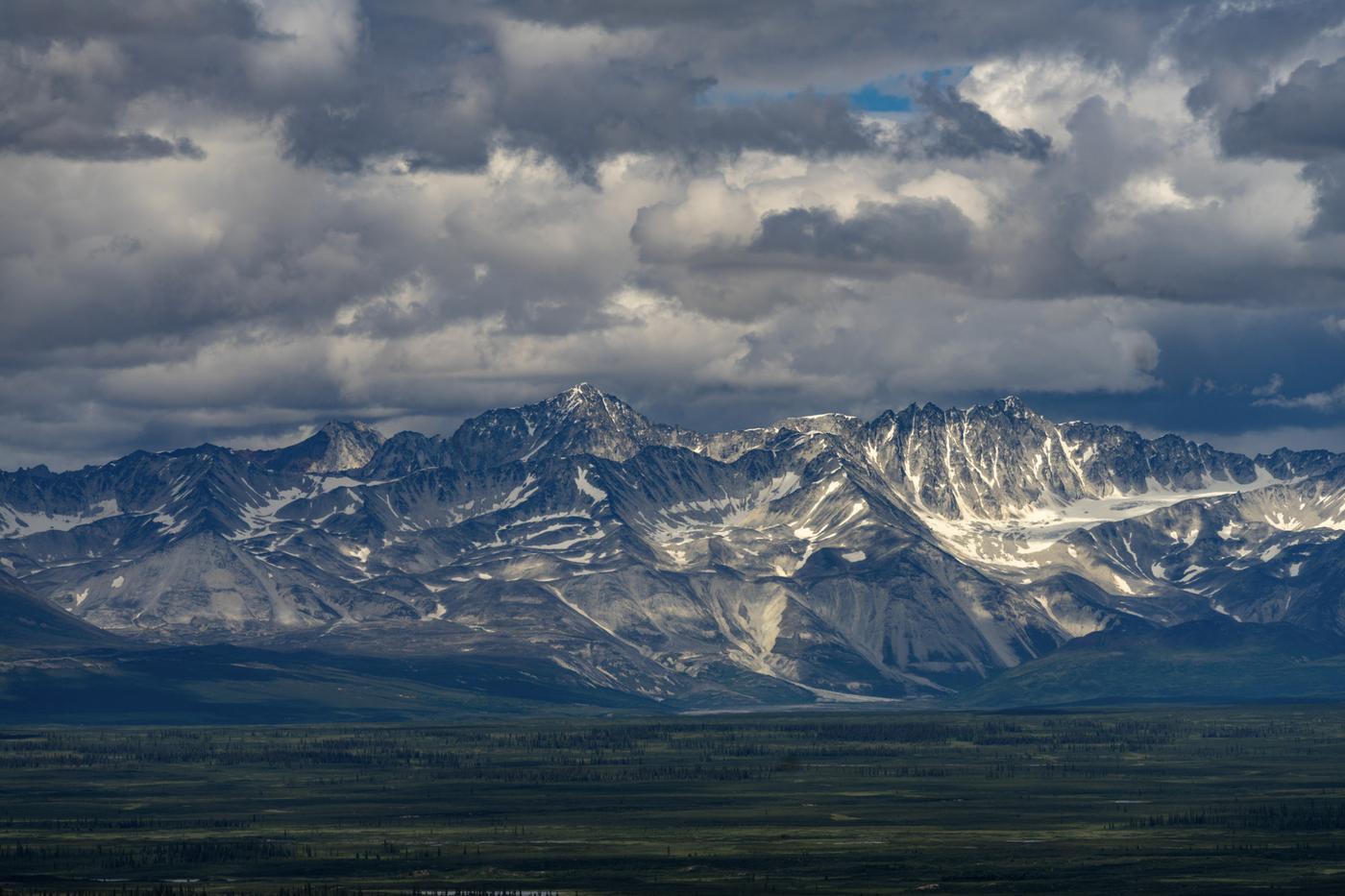 As for this being a lonely road, I disagree. After a year of pandemic zoom calls and social media scrolls, riding the Denali Highway with these friends felt like a party and a coming home: full and special and connected in the ways we love the most.