Holy shit. Where do I even begin here? First off, we just saw where Rick Hunter builds his frames in Bonny Doon, just outside of Santa Cruz so we have context. Second off, the name of this bike is one of the deadliest vipers on Earth, the Bushmaster. These snakes are capable of multiple strikes in milliseconds and will deliver a fatal amount of venom without blinking an eye *snakes don’t have eyelids.*

Multiple strikes, multiple gears. No, wait. This is a singlespeed, right? Look again. 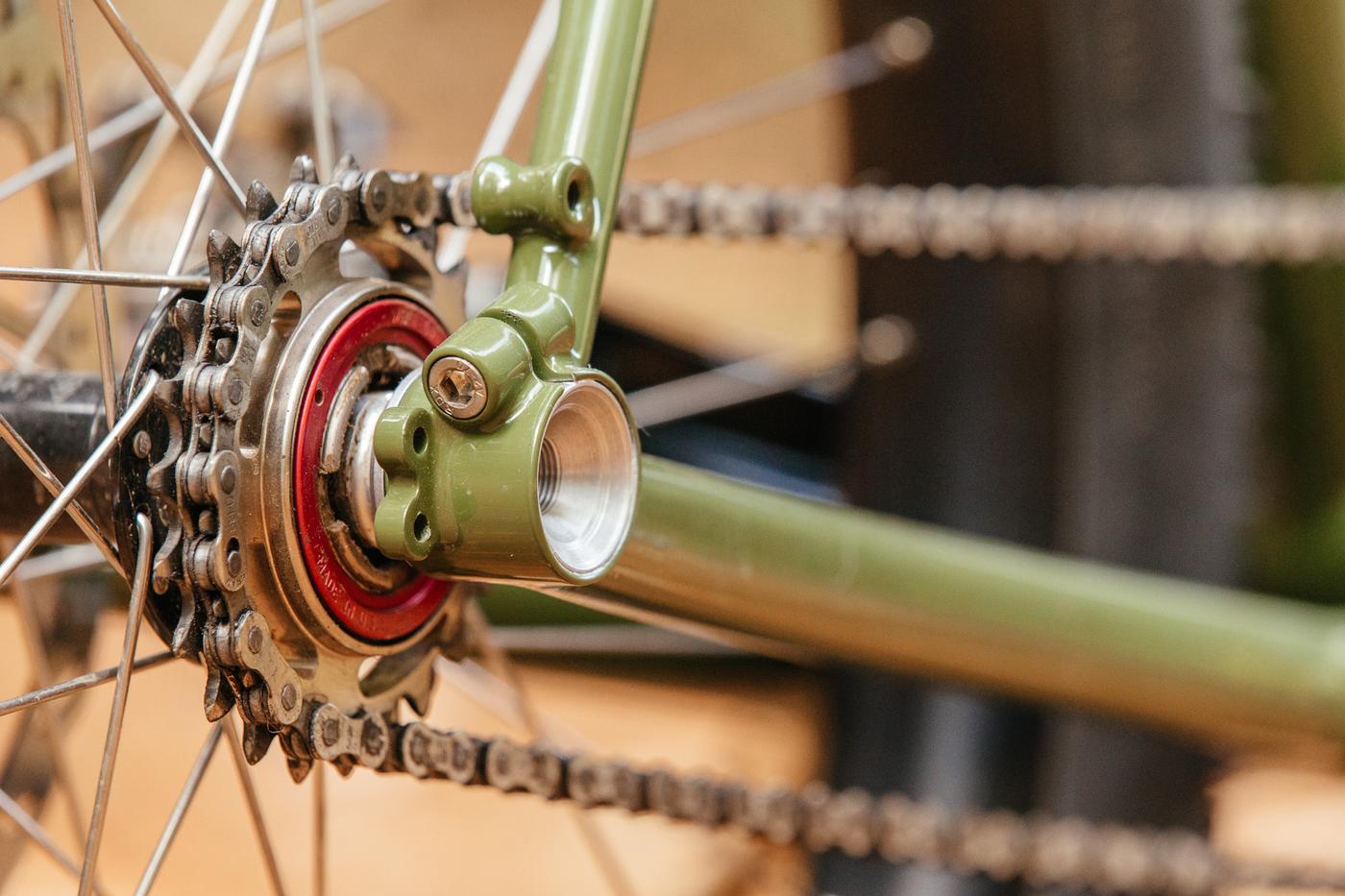 The Bushmaster features a few clever tricks to manually-shift gears. The crankset has a double and each of the wheels are laced to 142mm thru-axle disc hubs. Each hub has a White Industries Dos Eno freewheel. That’s 2×4 potentially. Through using his custom dropouts, there’s even an option for a rear derailleur.

So what is going on here? At the time of this bike’s conception, at least in the conceptual phase, Rick was enthralled with the 26+ platform. He wanted to make a bike that was the cycling world’s equivilent to the Unimog. Nothing made for speed, just overlanding. A machine that forces you to take your time and plan not only your route, but your gearing choice while on tour. Hit a steep pitch? Flip the wheel around. 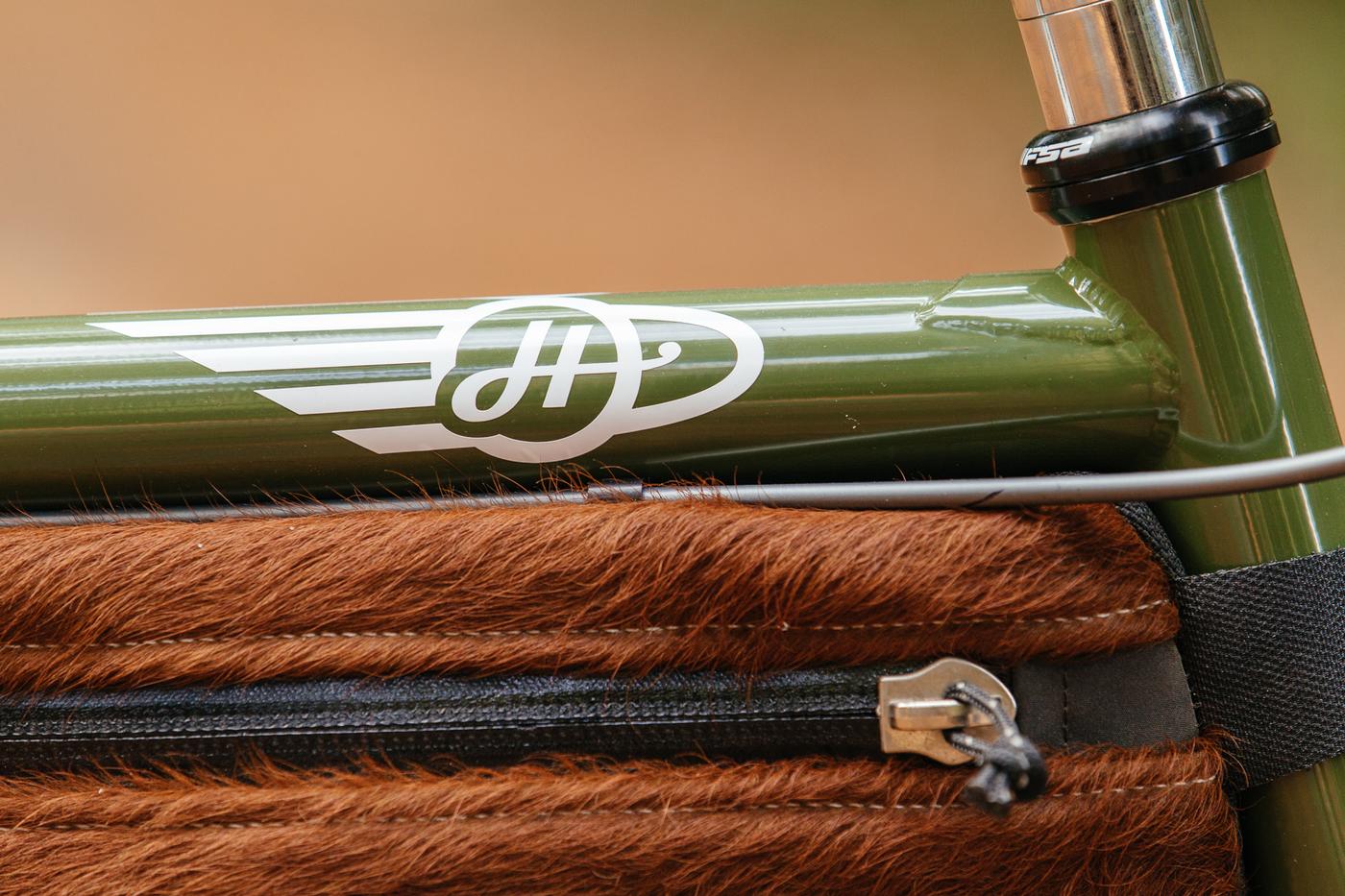 Bikepacking bags can increase the versatility on just about any bike and luckily, because Rick is six foot goddamn, he has a lot of cargo capacity in a Porcelain Rocket frame bag.

Ok, so the elephant in the room: chain tension. How does the Bushmaster deal with multiple gears and chain tension? 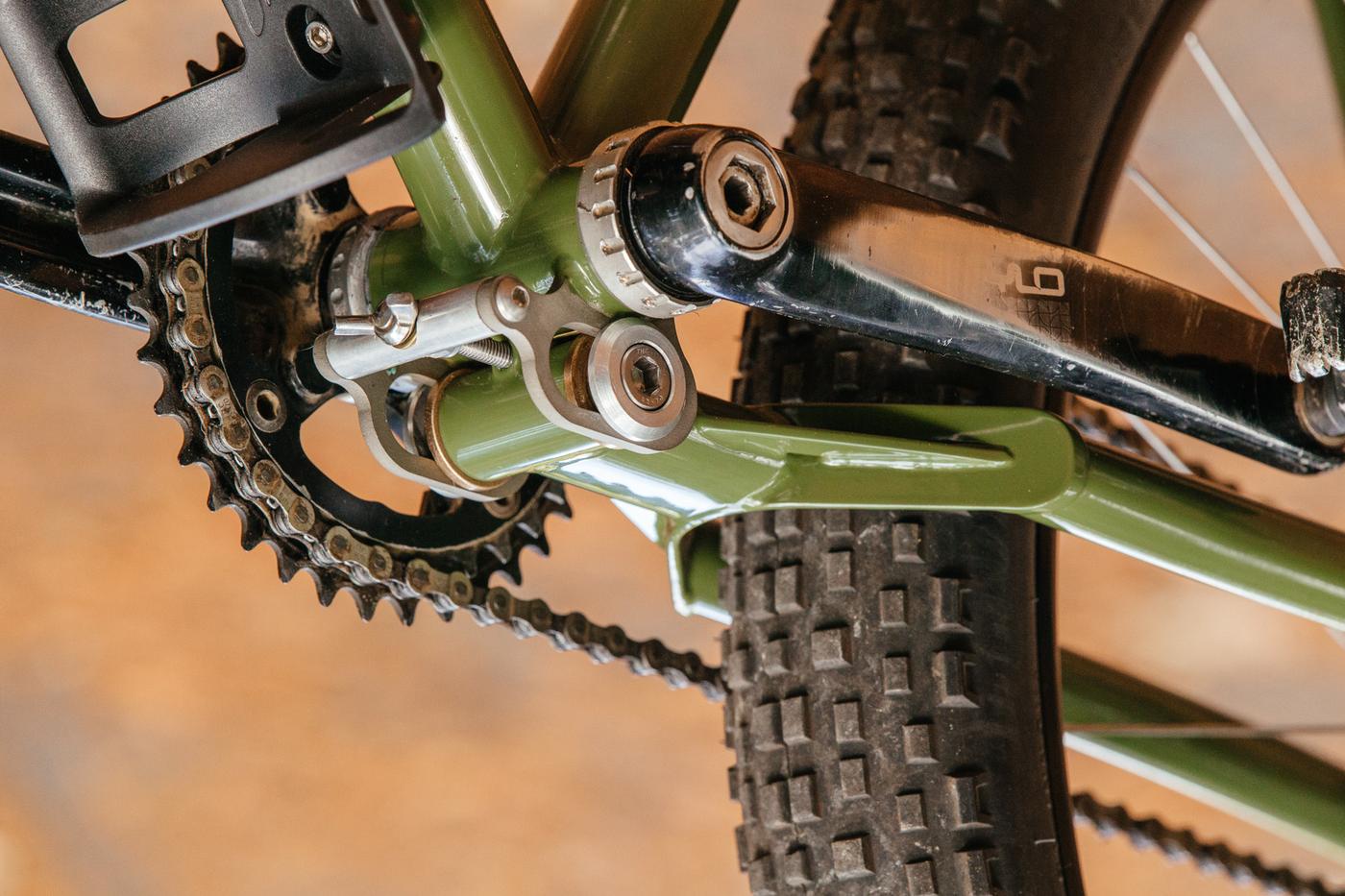 Feast your eyes on this contraption. A wingnut and a slider, both designed and machined in-house at Hunter Cycles, pairs with a coupler at the seat stay cluster, allowing for 1º of float in the rear triangle. This allows the user to twist the wingnut to get the correct chain tension and also makes the frame easy to travel with since it can break apart. 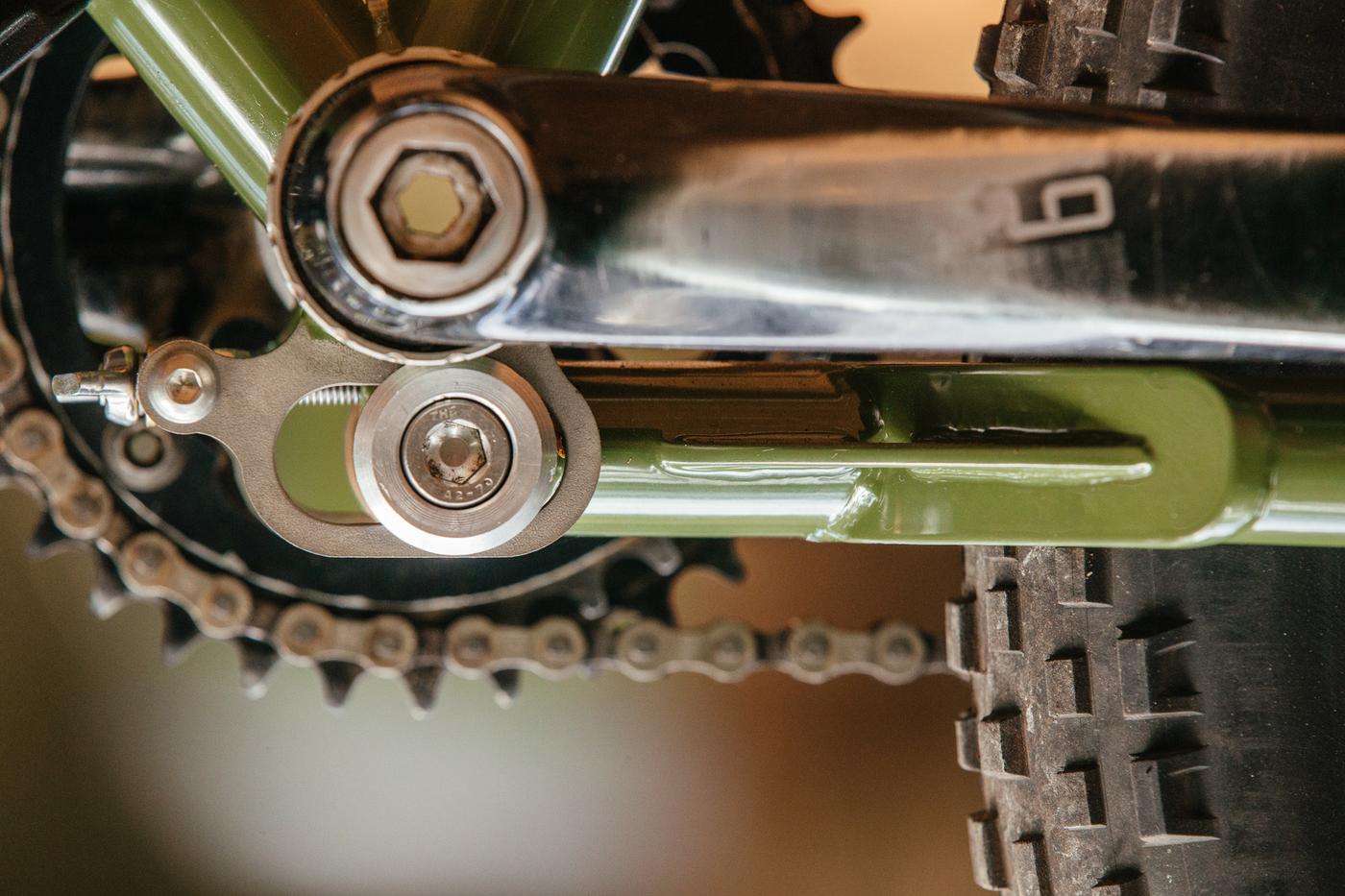 Kind of insane, right? It reminds me of something you’d see on a path racer from the 1950’s.

Look. This bike isn’t going to win the TDR, it’s not meant for aero extensions, or RAAM but it’ll tackle the steep fire roads surrounding Santa Cruz and beyond, all while forcing you to take your time, bathe in the forest and spin it to win it. 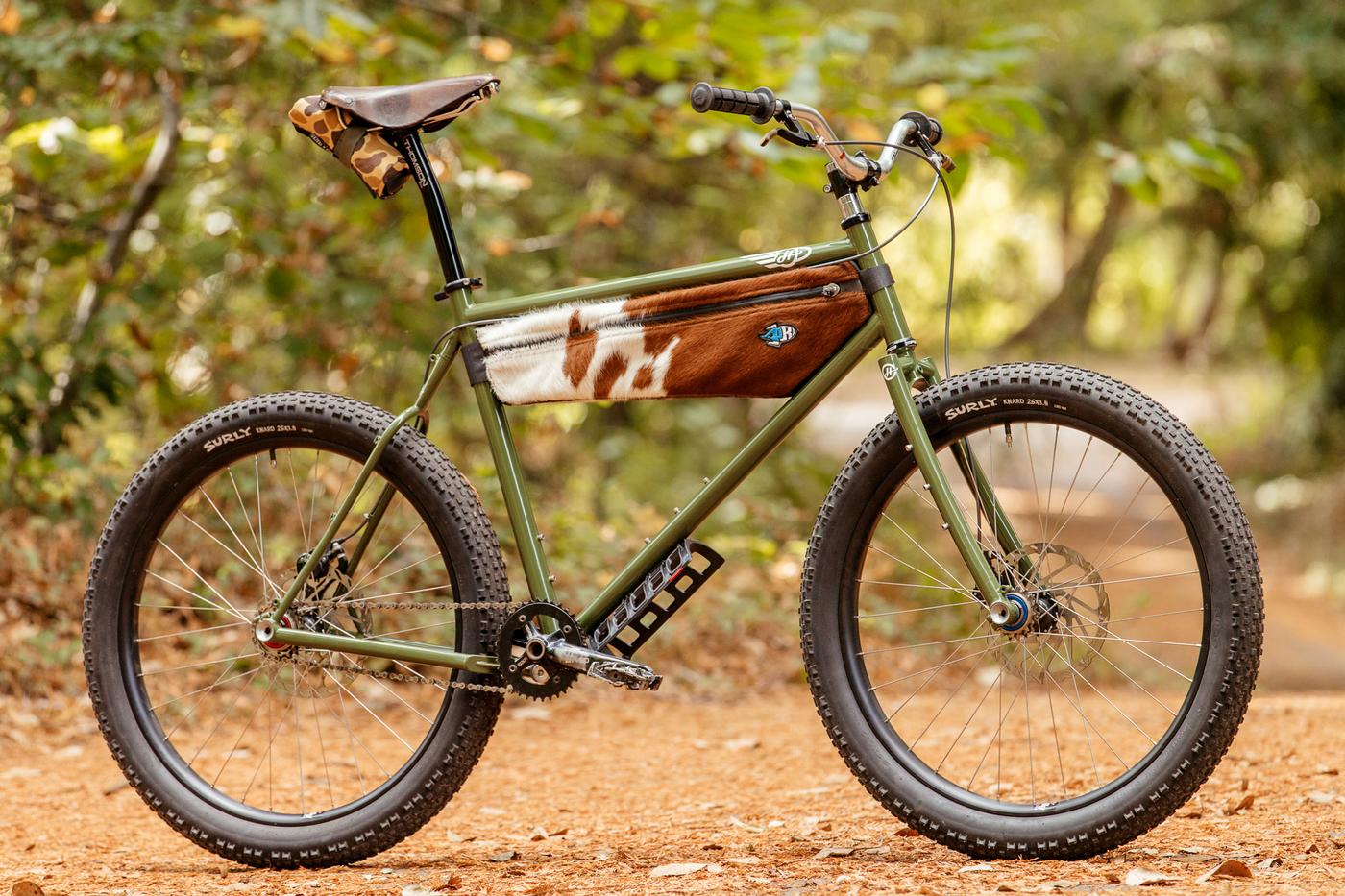 The Hunter Cycles Bushmaster is the most unique bicycle I’ve photographed this year and one that truly embodies that weird niche within a niche of the frame building world I like to call utilitarian art.

These frames (and the cow hide frame bags) were part of a small production run, which opened up two years ago. All frames have been claimed, but if you’d like Rick to make you one, holler at Hunter Cycles.