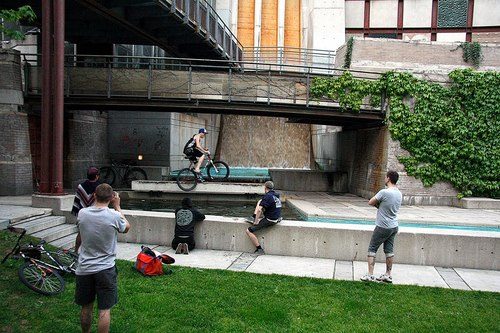 One of the more pleasant surprises in the recent Skitch Toronto edit was the re-appearance of Tom Mosher. If you recall, he snapped his collar bone a little while back on a nasty wallride crash. Mosher’s one of those guys that is willing to try anything in the name of progression. 26″, pegs, whatever, the man likes to experiment. While browsing Trick Track the other day, I caught a few photos that Alex Cirka took while the guys were filming. If you saw the Revival, then you’d probably remember Mosher grinding on a fountain in downtown Manhattan. I think this shot trumps that!