Since relocating to Los Angeles, a land with endless dirt in both the fireroad and track variety, my preferences have shifted a lot in terms of what I want a bike to take on. Capabilities are often grown in the industry piecemeal, then once and a while, a bike comes along that asks a question: what if?

The Cannondale Slate is a what if bike. What if 650b or 27.5″ wheels with a 42mm tire makes more sense for “all-road” riding? What if a damn Lefty shock with just the right amount of travel can instill confidence in new riders while offering an added fun bonus to experienced athletes?

Last February, I got to take a prototype Slate out for a spin and recently, Cannondale sent me a production Slate Force CX1 build to try out. I’ve been spending the past week or so thrashin’ and crashin’ this machine. While many exceptional bikes pass through this website, both for review and for personal acquisition, I will say this is the most fun I’ve had on a bike review. Most fun? Really? Moreso than the Urban Racer? Well, in a lot of ways those two bikes have a similar idea. Smaller wheels, bigger tires on a platform established by a 700c wheel. The Slate began as a concept: take a 650b by 42mm tire and you’ve got a similar diameter as a 700c wheel. Then Cannondale took it one step further. What the Fork is That?

But Cannondale didn’t stop there. Their Oliver Lefty fork is a new platform for the company.

Completely redesigned by a more-than-capable team of engineers, the Oliver uses SAVE technology. Now, I have no idea what the hell a SAVE is, but I will say it locks out for “climbing” and then opens up a whopping 30mm of travel. Don’t get me wrong, that 30mm of travel gets used more than you’d think. Surprisingly so.

I rode a lot of dusty, rutted and steep singletrack in the Verdugo mountains on it, always finding that little bit of travel coming in handy. It’s also nice to pre-load hops and jumps on trails, while absorbing potholes and dips on the road. After a long day on and off-road, you really begin to appreciate that extra 30mm of cushion. 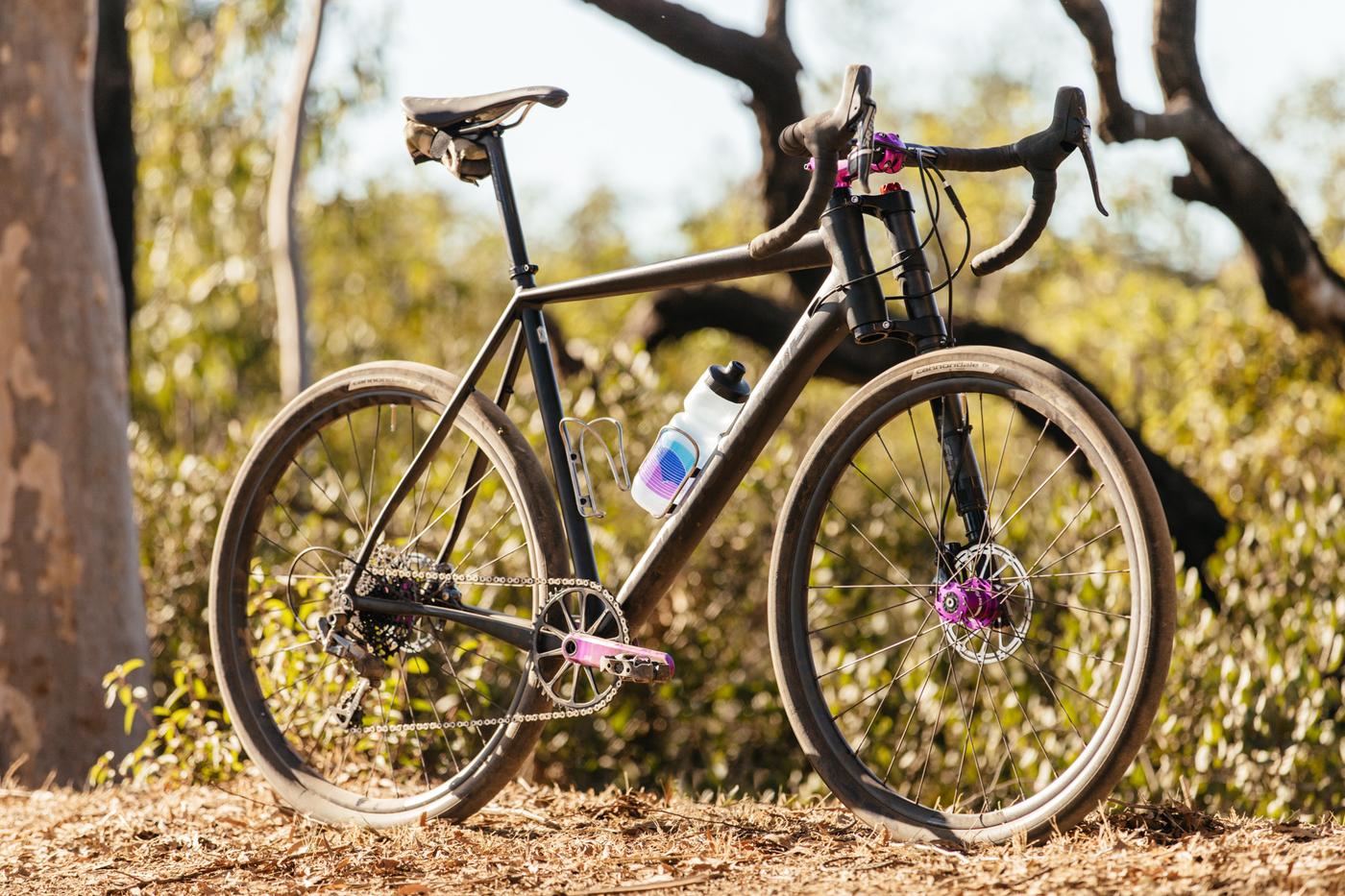 The Oliver is definitely the reason why this bike received so much attention. Is that gimmicky? Hard to tell because it’s the reason the Slate is so much fun to ride on one hand. On the other, I didn’t really think there was a need for a suspension fork on a drop bar bike before. 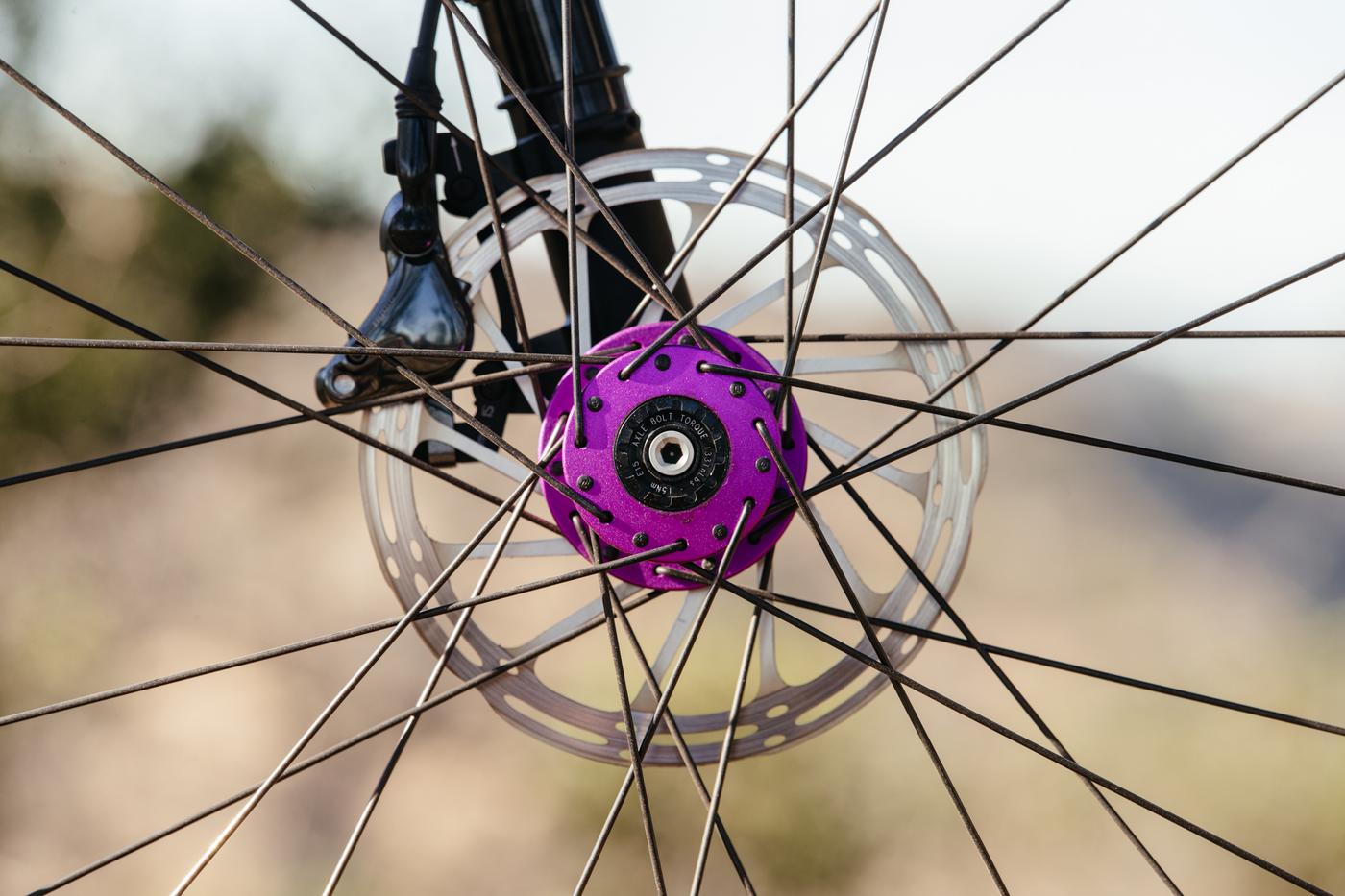 There are some other shortcomings. Personally, I’ve never been a fan of Lefty forks. They dive funny on turns, take a bit to get used to and are proprietary. While it’s nice to be able to fix a flat without removing the wheel, if you transport your bike in a car, it’s a pain to have to remove the disc caliper to do so. A pain, but I’m sure after extended usage, you get used to it. 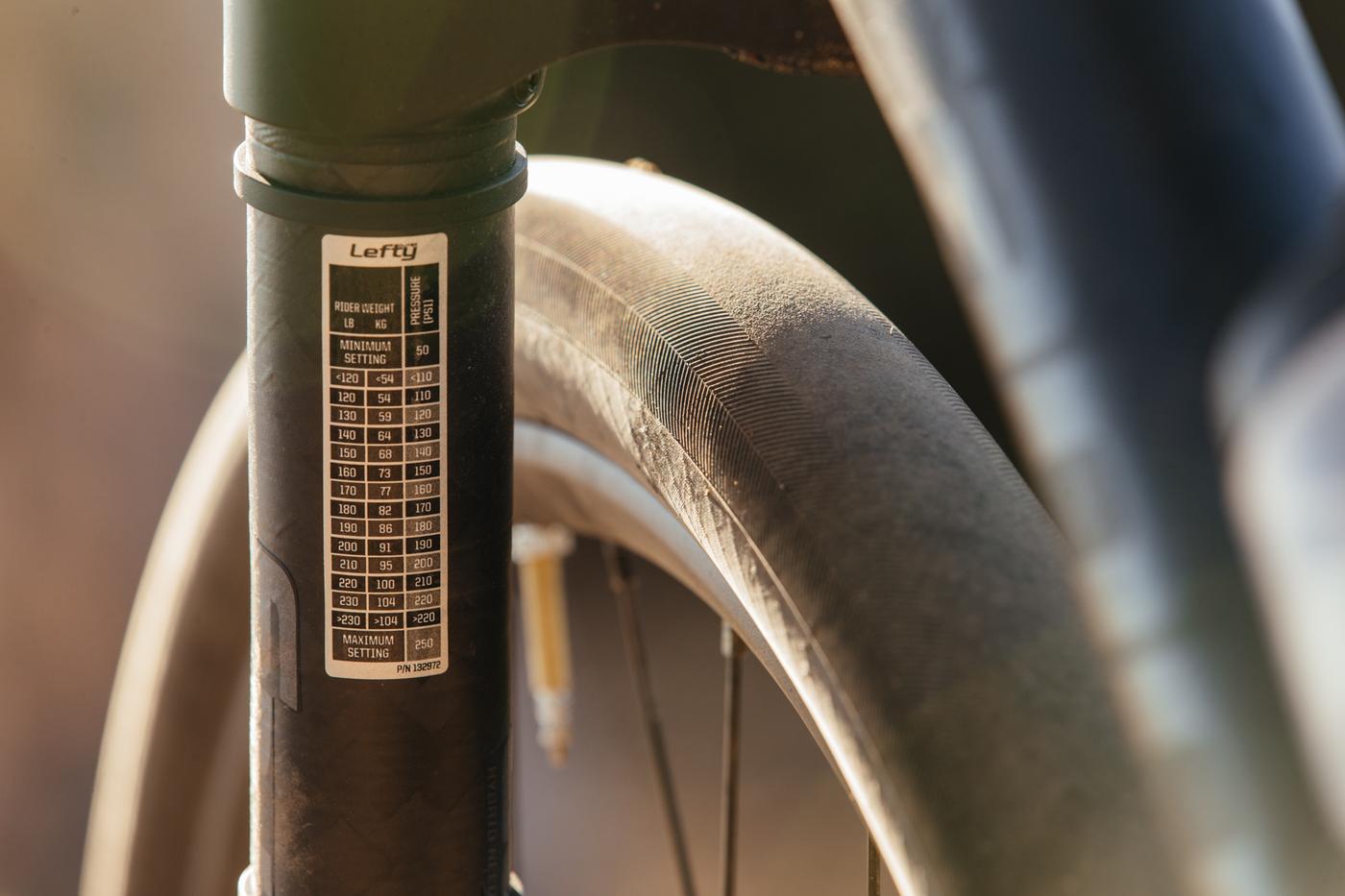 Setup was easy. There’s a weight chart and a valve on the bottom of the fork. A few pumps and you’re ready to roll. I don’t think I ever locked the fork out once in the 200 or so miles I put on it last week.

Still, without stating the obvious about the Slate, the Oliver is the main reason why this bike is so much fun. 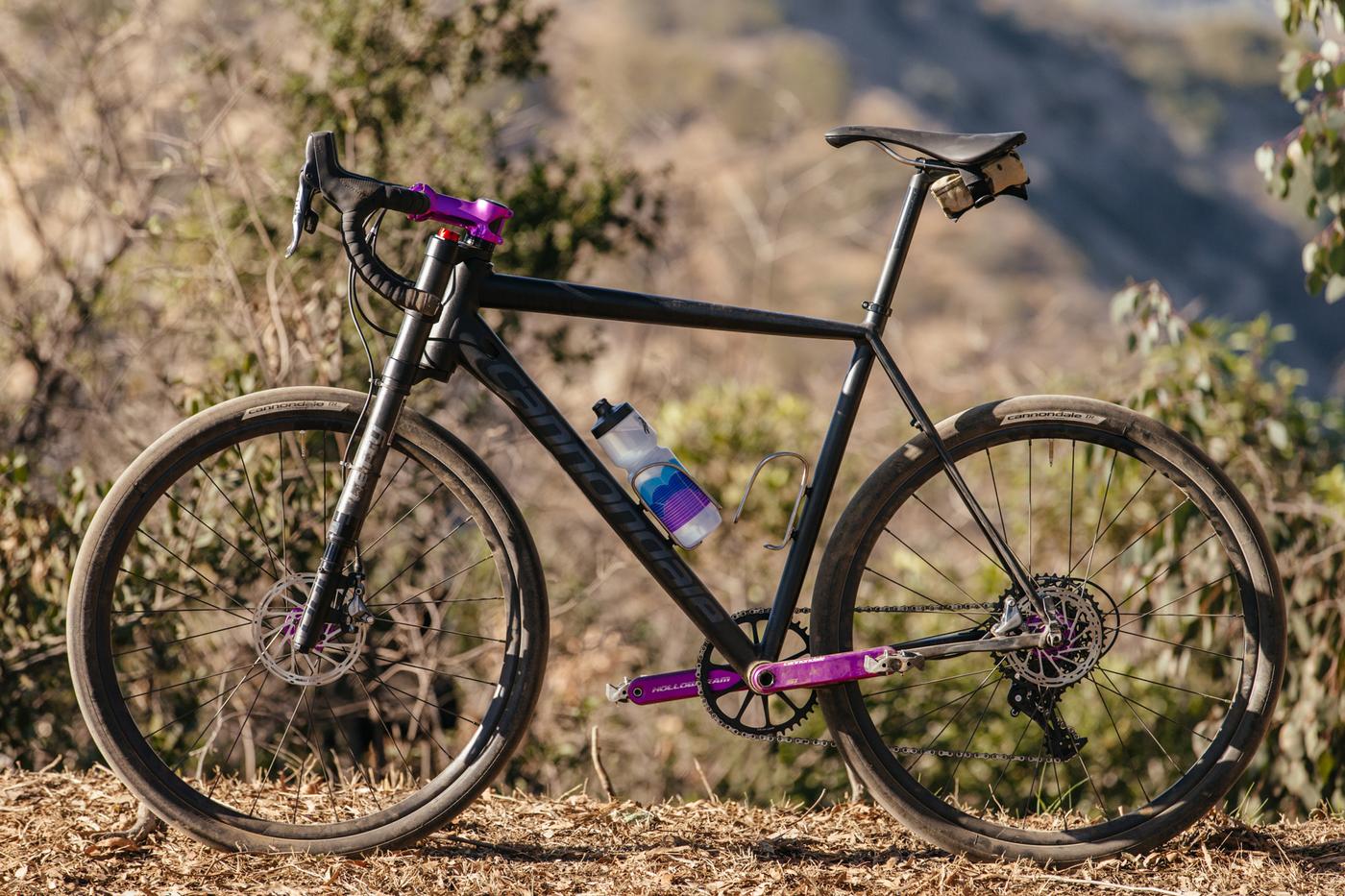 Take these two things: a frame designed for a 650b by 42mm tire, a 30mm travel fork and you’ve got the Slate in a nicely-equipped package. The Force CX1 build features Hollowgram cranks, a quad-burning 44t chainring, super supple Panaracer-made tires that set up tubeless easily right out of the box and some other Cannondale-branded goods. 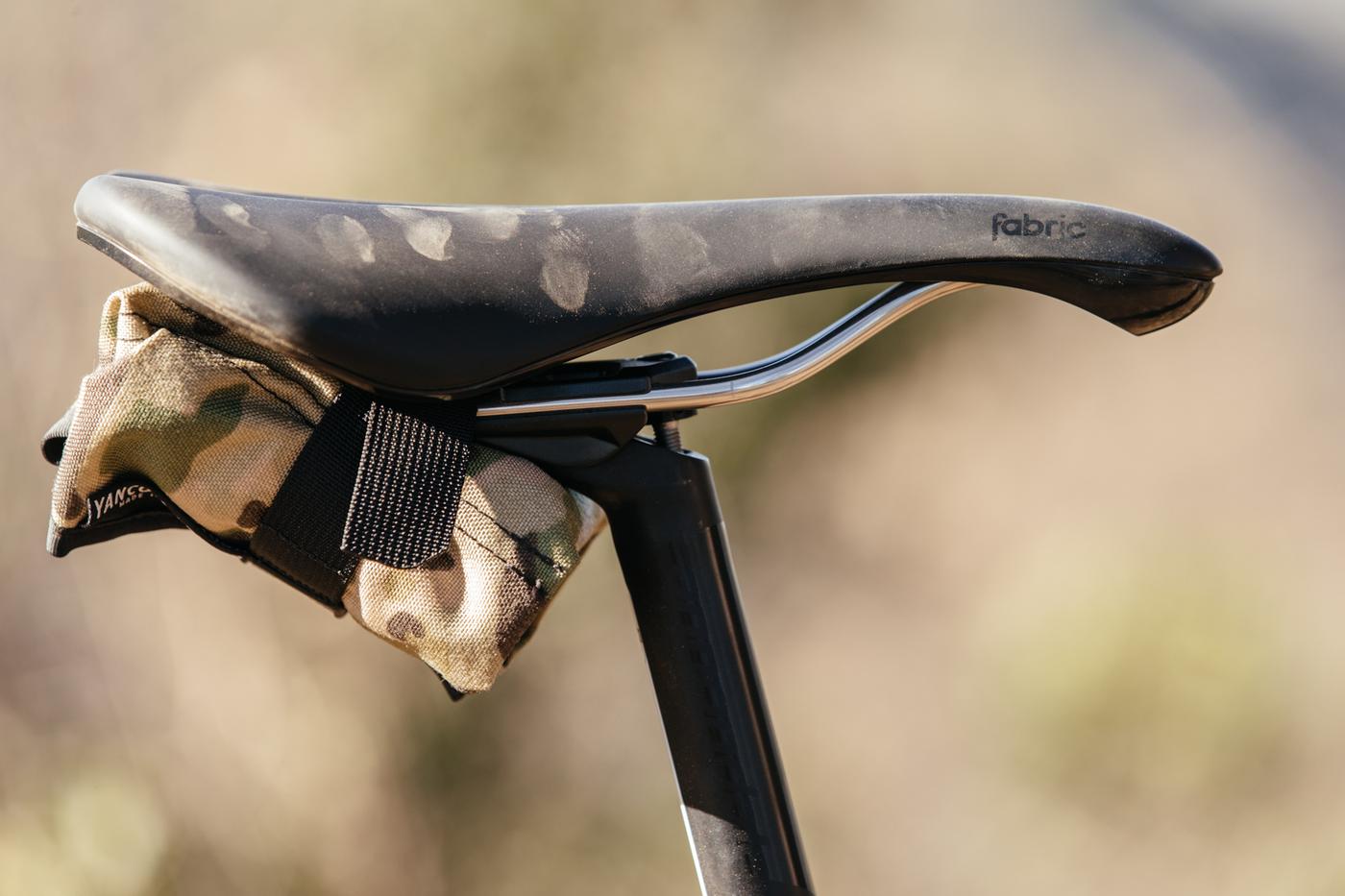 I never really say this, but if I paid $4,260 for this bike, complete, as-is, there’s nothing I’d add to it, save for some tubeless valves and a cup of Stans. Down to the saddle. Yep, the Fabric Scoop saddle is super comfy for my sit-bone width. Even in the super-dusty and silty trails we have in Southern California, the Panaracer tires were capable. Until you really needed some tread, then it was like riding on ice. 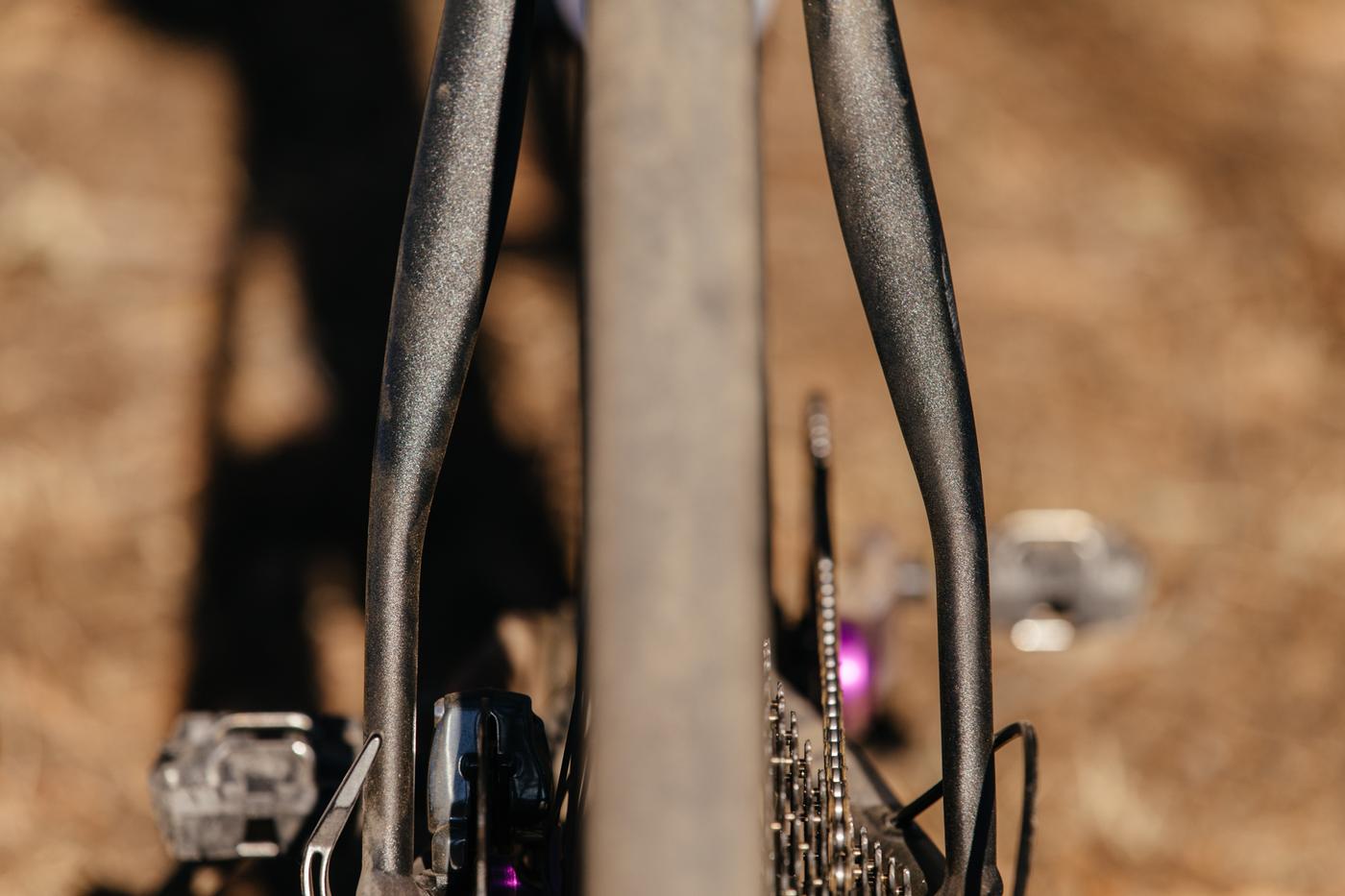 Holy shit this bike has some really special moments. The stays are shaped, the bi-oval top tube, internal routing and matte black just looks so slick. It screams speed demon with a bit of fashion-forward nodding to the classic anodizing aesthetic of mountain biking’s golden era. 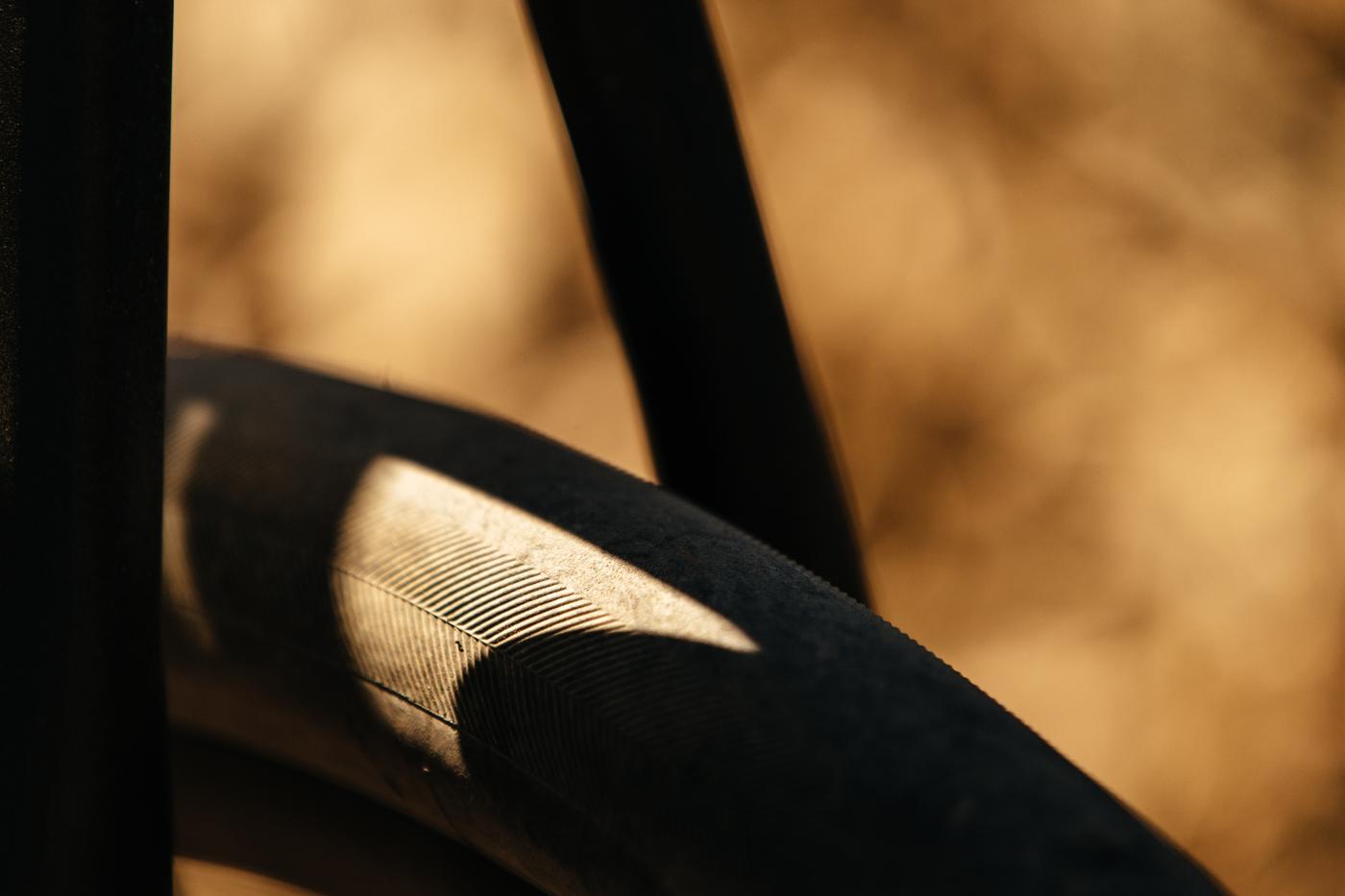 These tires are so good. So, so, so good. They’re supple, light, and corner like a tire you’d expect from a made in Japan casing. They have just a little bit of directional tread to build confidence on dusty turns. With all the aforementioned qualities, they seem like they’d be prone to ripping. Even after my 200 or so miles on them, there are some questionable marks on the sidewalls.

The Slate’s clearances at the stays would make it tough to fit in a treaded tire. Maybe something like the Soma Cazadero would fit though. 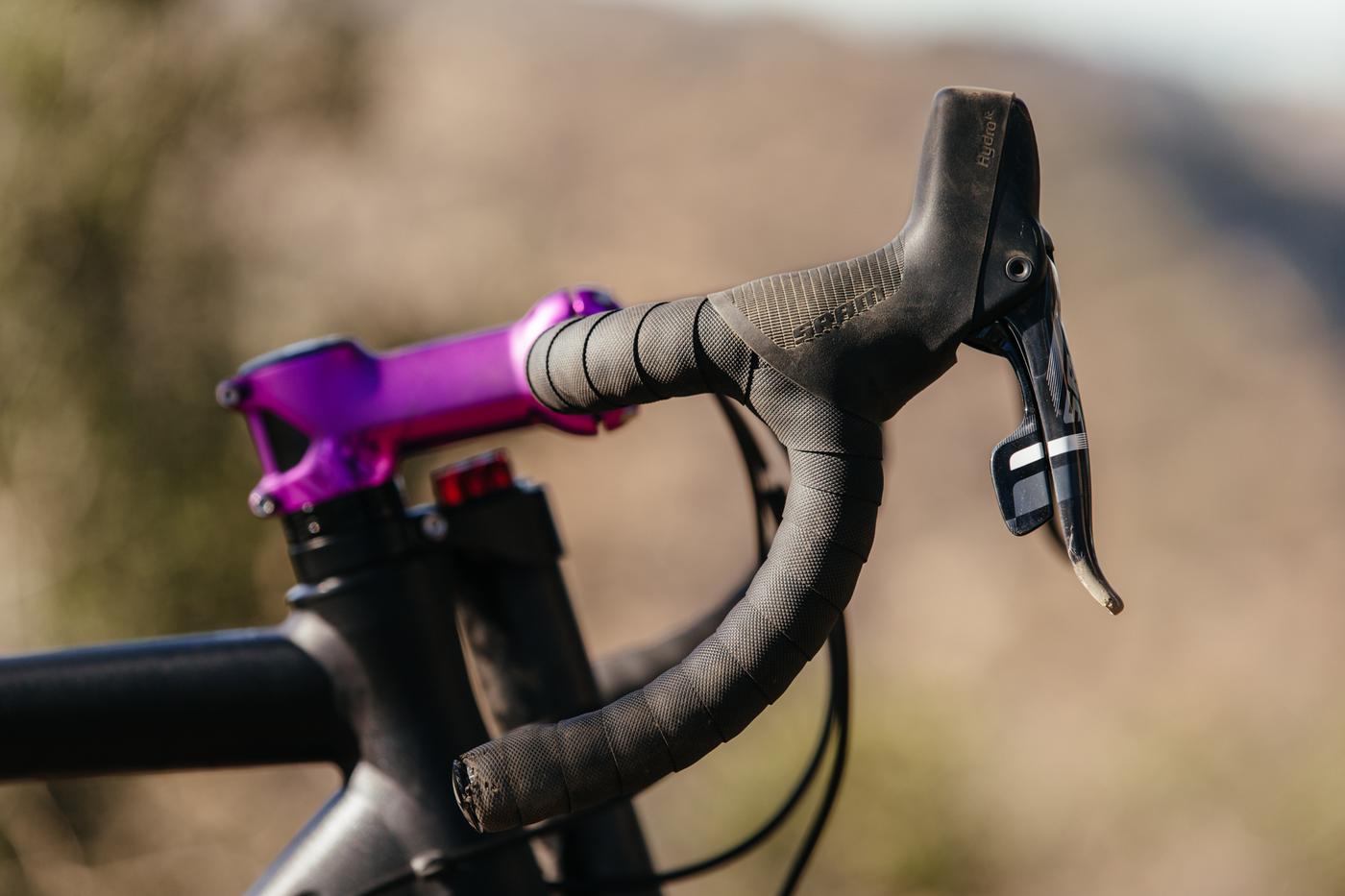 As with learning new equipment, you often test the limitations. For me, it was how much you could dive into singletrack turns on the bike. With the combined slick tires and getting used to the Oliver fork, I definitely crashed a bunch. Most times I could clip out and crab walk out of the spill, but I took one of the hardest diggers I’ve had on a drop-bar bike in some time on the first ride. Whoops!

So… who would ride this thing?

The Slate is a perfect bike for someone who has ridden road bikes their whole life and want to get into some off-road riding, or someone that’s ridden mountain bikes their whole life and want to hop on a drop bar bike with some panache. Since I ride a lot of different bikes, on a lot of different terrain, I’m also interested in experiencing something entirely new and that’s what the Slate is. The Slate is a strange one. Part of me wants to see it spec’d with an internal dropper post for an extra FU point. Should you buy one?

Look, $4,260 is a lot of coin. You could buy an entry level road bike and an entry level cross bike for that much. You could buy an entry level cross bike and some really nice wheels but that’s the point. The Slate is two bikes in one. It’s part road and part cross, with a little bit of mountain genes mixed in, down to the 10-42t cluster cassette on the rear! That with a fully capable group, some bomb ass wheels, super soft tires and a frame with so many curves and shapes it should come with a 18+ Explicit content sticker.

The Slate is available in size Small through X-Large and comes in Shimano 105 build kit for $2,980, an Ultegra kit for $3,520 or as pictured with CX1 for $4,260. Head to Cannondale and your local dealer for more information.

If you’re interested in trying one out, head to your local Cannondale dealer and give it a spin.