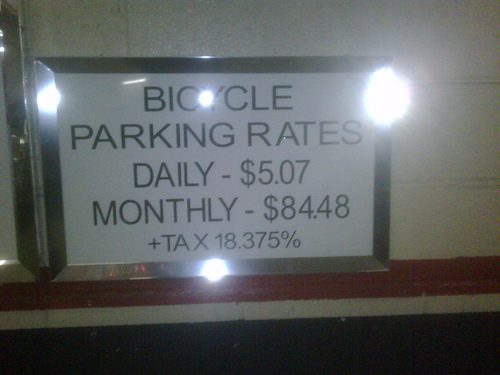 Photo by Bicycles Only

I could go on explaining my disdain for shit like this, but Bicycles Only does a better job.

New York city garages are finally starting to comply with the law which took effect on November 11, requiring them to accept bicycles for parking. The details of the law are described here.

Unfortunately, many of them are charging too much–this is actually the lowest rate I have seen, among the handful of garages that will accept bikes for parking at all. Even worse, the garages are all charging parking tax, which by state law can only be collected on the parking of motorized vehicles. I guess no one told them they can’t do this! DCA has dropped the ball on this big time.

Pathetic. John Liu, you’re doing a bang-up job over there. Way to put the DOB in charge of things the DOT and Consumer Affairs should be in control of.