The Road to Delcie’s Cup Cake

This past summer I was lucky enough to meet to some truly amazing people in Minneapolis.  I noticed a common thread connecting these wonderful humans. It all culminated in getting to ride with Delcie on her über custom Cup Cake…

Erik Noren is a bit of mythical beast in the world of framebuilding. His bikes are outlandish, sparkly, and painstakingly detailed. With his newer venture, Cake Bikes, he seeks to build proportionally-sized, high-performance bikes for shorter riders. Cake partnered with Minneapolis Wheel masters HED cycling to offer fat-bikes built around a 24 x 4” platform and has since moved into building cross and gravel/adventure bikes built around a 650b platform, and some yet smaller wheeled bikes which we will get to at the end.  While the bikes’ geometries are focused on smaller humans regardless of gender, the cake race and adventure team is compromised entirely of women/trans/femme/non-binary riders. 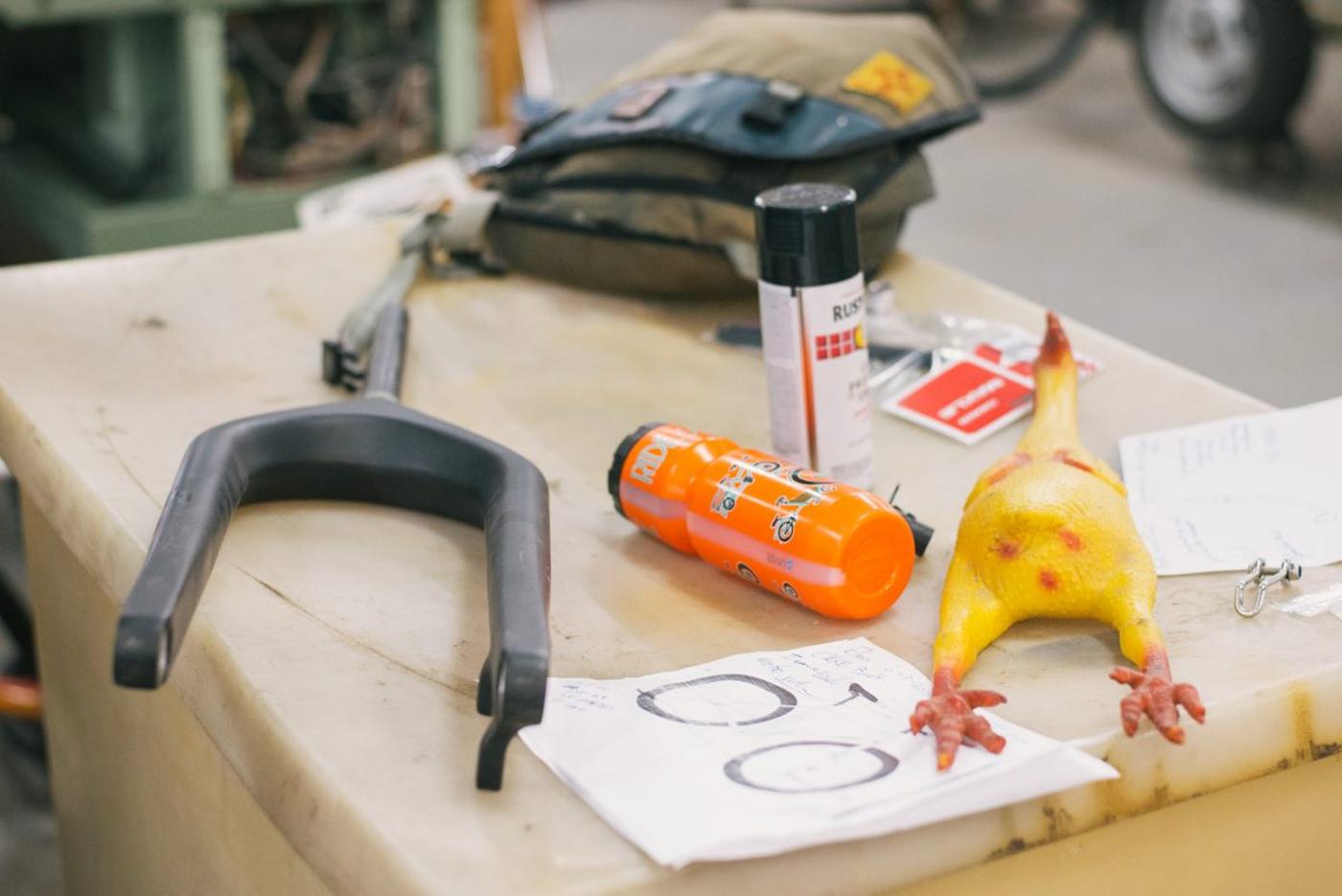 The shop is an exploded view of Erik’s multitude of interests. There are anime posters and figurines scattered about, a very large machine for sewing embroidered patches, an old Dodge Colt Vista project juxtaposed by an Evil Dead inspired track bike. Peacock Groove’s shop is littered with heavy machines including several WWII era gems. The man himself: Erik is perpetually curious and almost always excited about something new and increasingly esoteric, bikes or otherwise.

Erik has built hand over fist, more bikes than many of today’s custom frame builders, and like all skilled craftsman, he needs an apprentice.  As will become a theme in this piece, it’s a small Minneapolis world, and Erik found his apprentice, Ari, working as a mechanic at Peacock Groove’s partner bike shop, Northern Rose Bicycles. 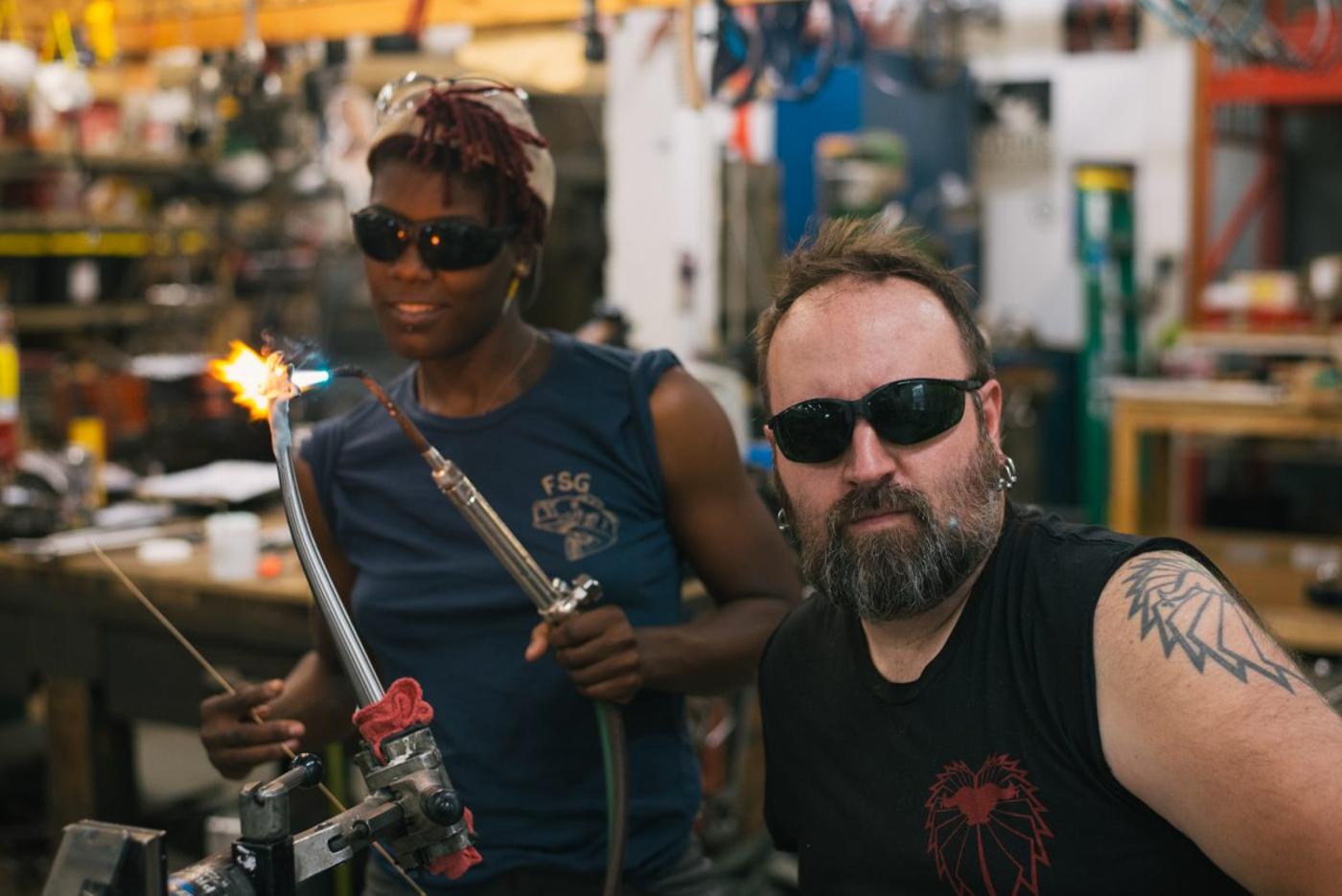 I can imagine Erik being quite a handful to work around, he’s got strong opinions and a penchant for conversational tangents.  Ari seems like quite the complimentary cohort as I sit in on a fork brazing lesson. Today they have learned about sandblasting parts, bending fork blades, and brazing lugs.  In the future hopefully, Ari can help Erik be less involved in the more basic aspects of frame building and allow him to focus on making things even more sparkly.   Speaking of sparkly, Erik is planning to begin offering powder coating and refinishing services in-house in the near future.

Northern Rose Bicycles lies in the Corcoran neighborhood adjoined to a tattoo parlor and catty-corner to Matt’s Bar, the infamous home of the Juicy Lucy burger. Though the shop only opened in 2017, the owner, Eric Lyngaas, is no stranger to the custom bike industry and has an encyclopedic knowledge of all things bike.  He tells me a story of his first custom bicycle, a Waterford mountain bike he rode to prom, he can’t find a photo of his date but he still has a photo of himself dressed in a tuxedo, standing with the bike. 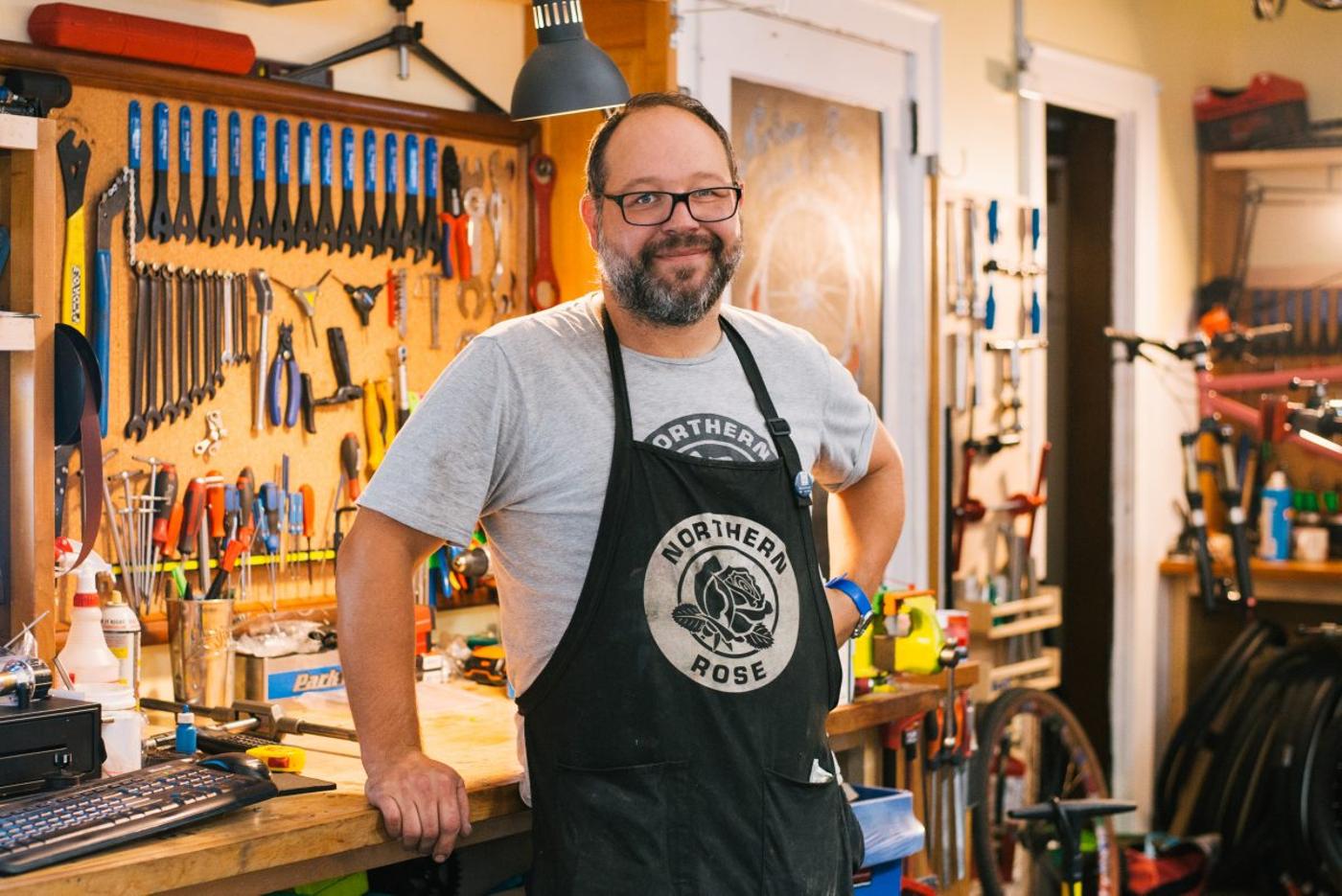 The shop is small and focused on service, wheel building, custom bikes, and bike fitting. The handful of bikes adorning the small space range from a delicate and ornate Osell track bike to a custom Cake fatbike.  A Peacock Groove Voltron Inspired track bike stands out in this ostentatious field of bikes. 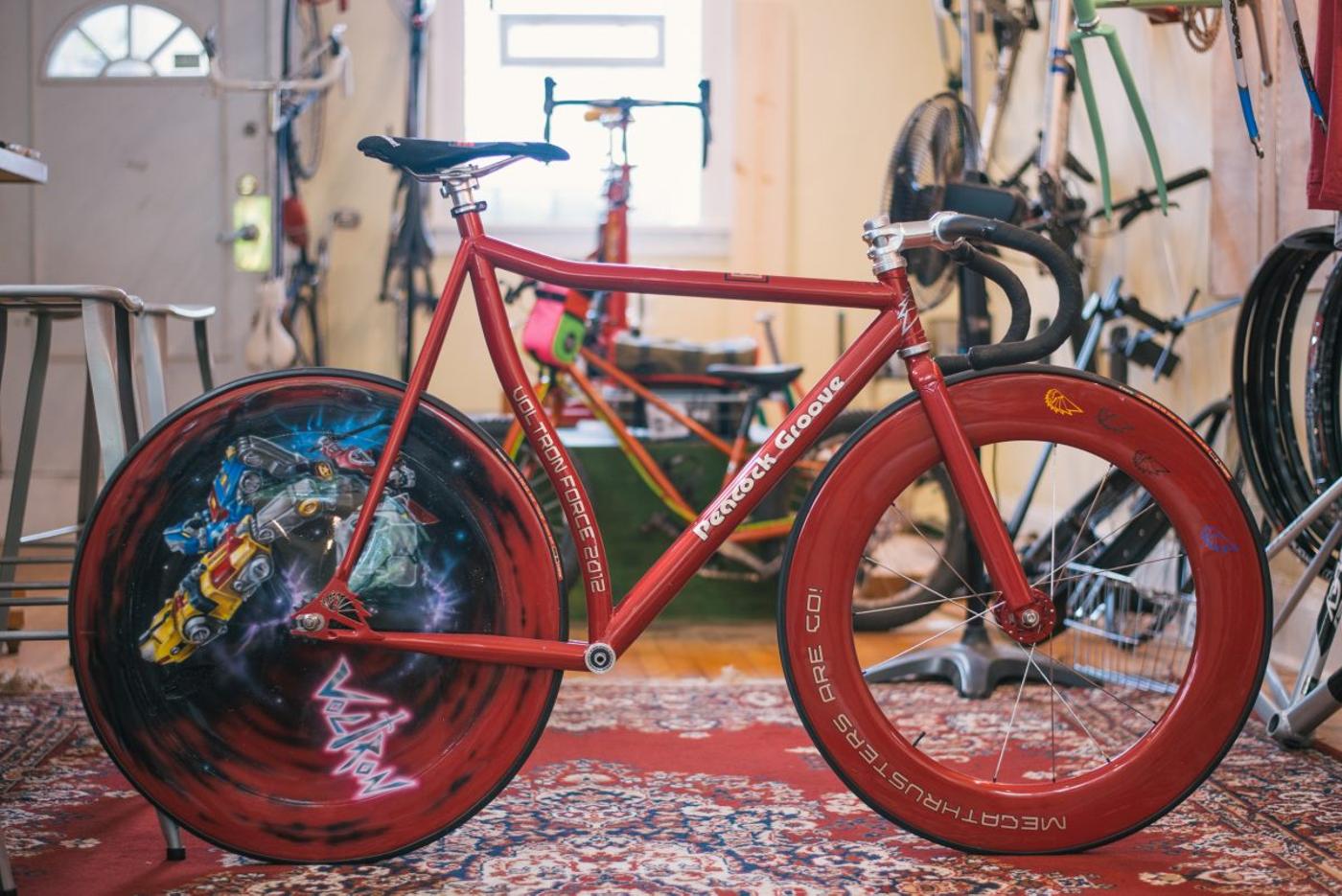 Eric of Northern Rose approached Erik at Peacock Groove when he first opened the shop to be the storefront for Peacock/Cake bikes.  Northern Rose consults with clients to establish their cycling goals and needs. That information is passed along to Peacock Groove so Erik can focus on building amazing bikes without being bogged down by what can be time-consuming and involved customer meetings. Northern Rose and Peacock Groove share a symbiotic relationship that allows both professionals to do what they do best.

Brian and Alicia were some of the first people I met in Minneapolis.  I had known their work from a custom run of bags for Crust’s Evasion frame some time back.  Their signature colors of bright pink and aqua and roll top designs make their work instantly recognizable. 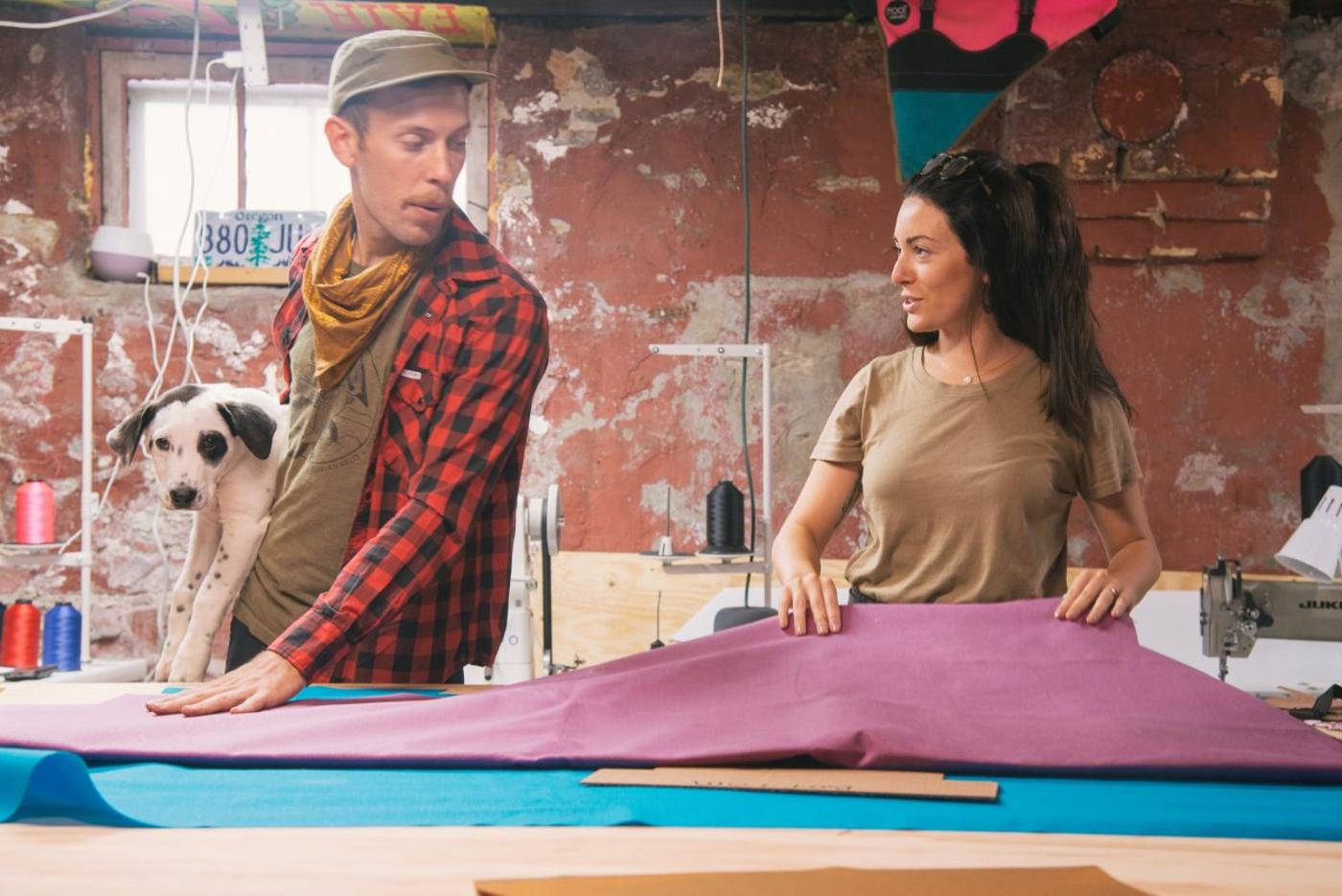 Hoot Ventures is a sideline for Brian and Alicia, they still have other jobs outside of sewing, Hoot is truly a labor of love.  The foundation of the Hoot/Peacock Groove/Northern Rose partnership was built when Brian offered to make an ultra custom doughnut sprinkle themed frame bag for Brenda’s Cake bike to match the ridiculous and stunning hot pink, sprinkle, a doughnut paint job that graces her bike. Brian and Erik are currently collaborating on a super custom Cake after Brian rode a Cake bike on our DFL the Divide trip this past summer. 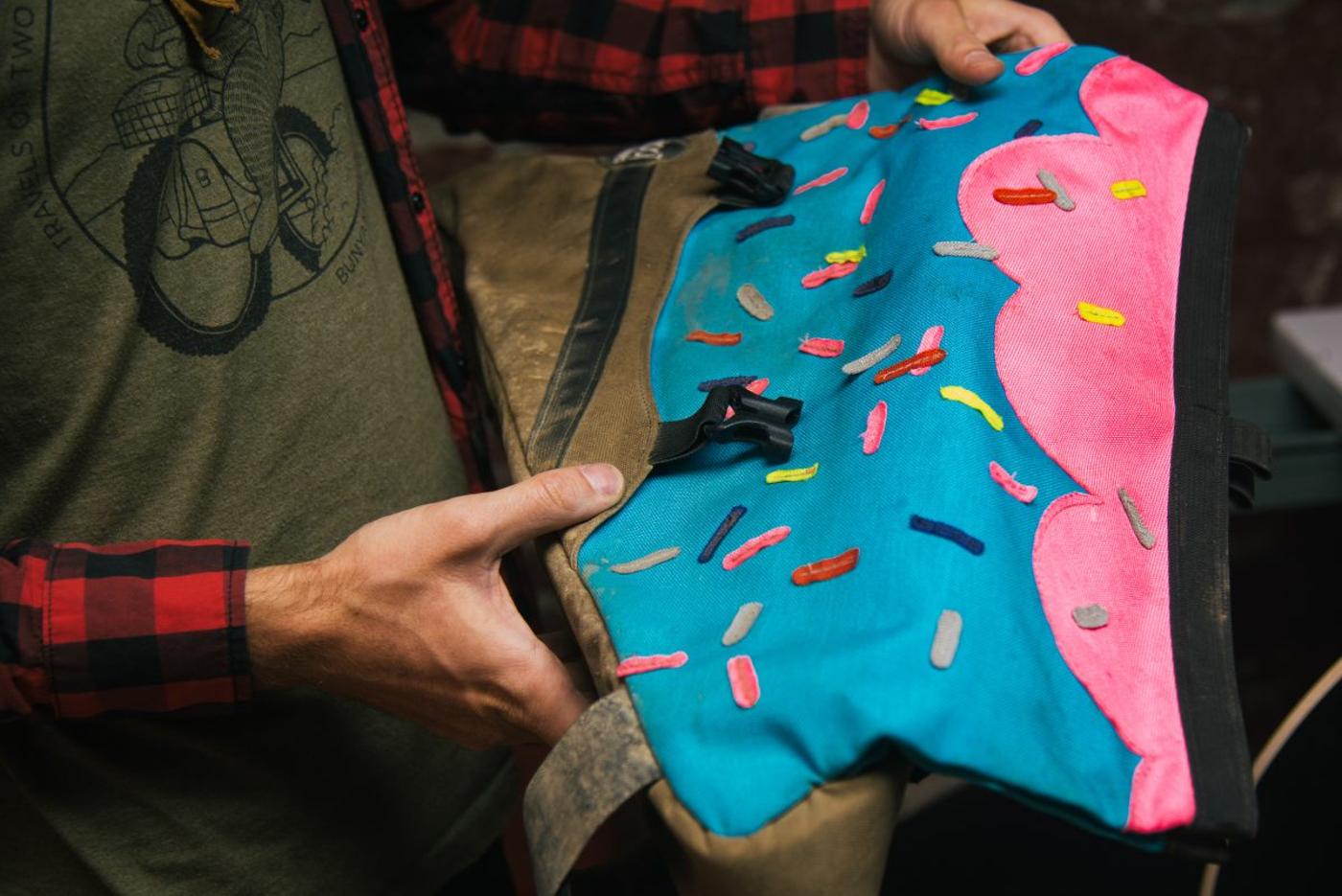 While visiting, I brought Brenda’s frame bag for some minor updates with their new bartack machine.  Brian was also working on a new magnetic closure system for his framebag while Alicia was cutting out fabric for a run of fanny packs. All the while their dogs and cats do their darnedest to distract them.

What happens when you bring all of these wonderful humans together?  Possibly the deepest custom kid’s bike to ever grace the interwebs.  Delcie is the daughter of Eric from Northern Rose.  Delcie’s bike is a custom Cake, a 20 inch wheeled, trail and snow capable bike dubbed the “Cup Cake”. The paint and color scheme is inspired by what else, but rainbow sherbet (Delcie’s choice).  Eric and Delcie get out multiple times a week for a spin on the amazing trails around Minneapolis, with plenty of breaks for blowing bubbles and other silliness.  Delcie usually wakes him up early pleading to go out and ride.

Now before anyone goes on about how gratuitous or frivolous it is to have such a custom bike for a child, I invite you to watch the videos of Delcie watching her bike get built. Eric Lyngaas has been riding, selling and working on custom bikes since high school, why wouldn’t he want to share this passion with his daughter. If anyone could see the joy and pleasure Delcie exudes riding around on her custom Cup Cake or pulling lip gloss and snacks out of her Hoot Ventures bar bag, I’m sure all arguments for frivolity would fall to the wayside. All of these very passionate people came together to help make a young girl extremely excited about cycling. In the end, isn’t that what matters? 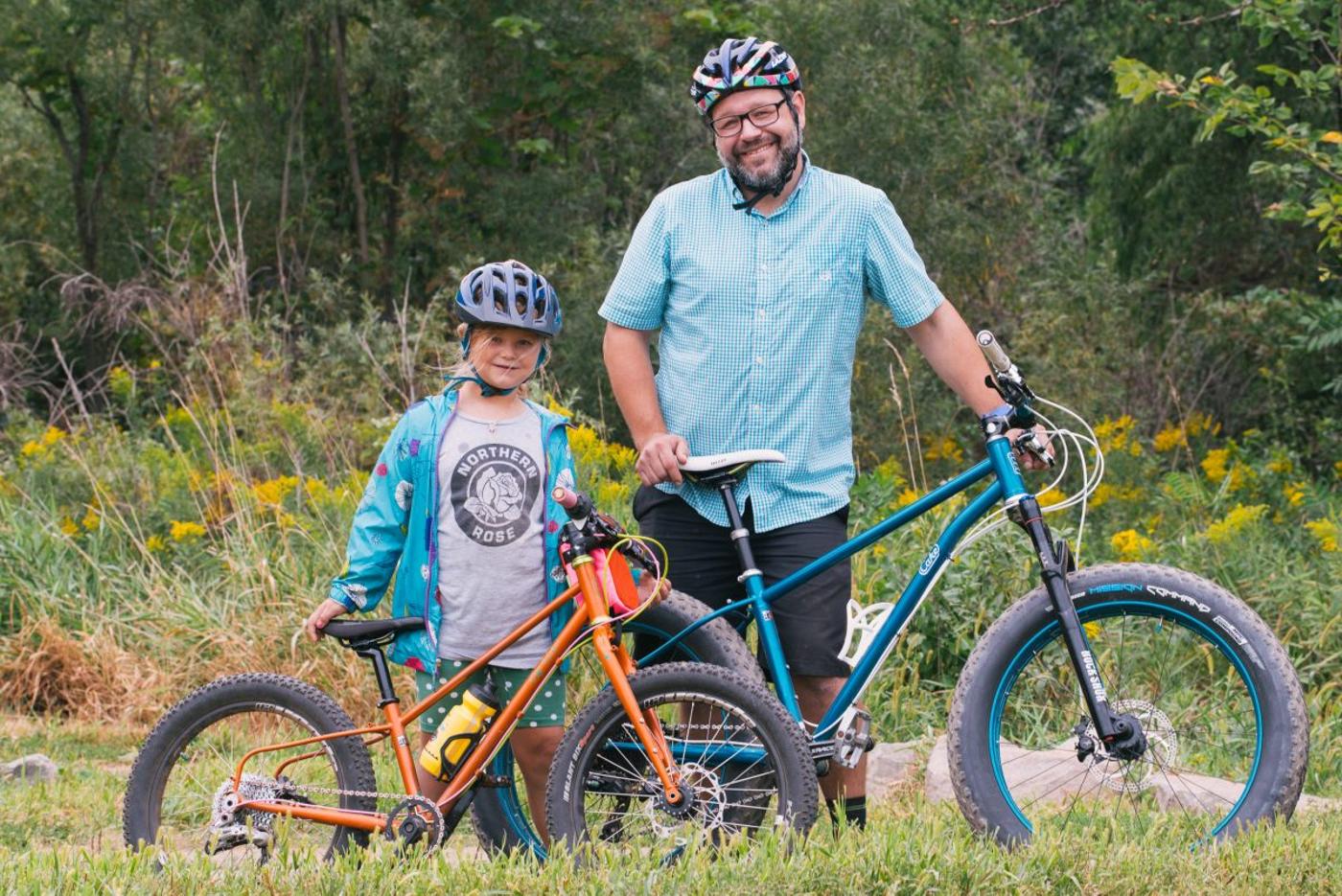