The Ramen Journals: North Fork of The Flathead River

It wasn’t but a few minutes of being back in the van after floating the Snake River that Julia was already figuring out what river was next and how to make it better. We had already gotten some good info about the North Fork of the Flathead River in Montana from a good friend of ours who grew up taking family trips down the section. He made it sound like some kind of magical dream land filled with big fish, crystal clear water, and endless scenery. Naturally, this would be our next river of choice, but this time we would do an overnight and with no van shuttle. Once we reached Montana and spent a day checking out the area we spoke with the camp host at the campground where we would be taking out. She gave us the ok to leave the van in one of the parking areas overnight while we would be on the river. With so much free camping around us, we drove off and found our own spot up in the mountains a bit, where we would do a tiny amount of packing and prep. I say tiny amount only because we didn’t really do too much that night, mostly just ate ramen and drank whiskey by the fire. In the morning we did a better job of getting stuff ready before moving to the parking lot to do the rest. Here we laid out all the gear, which was mostly borrowed, since I brilliantly decided to leave basically all our overnight, out of the van sleeping gear at home. I made some decisions on what to take and what to leave, figured out how it would all fit in our bags which normally wouldn’t be too hard but with a bear canister, things get weird.

Then set off up the very heavily wash boarded road towards the small town of Polebridge. The road stayed pretty close to the river for near halfway up before it pulled off into the trees and we could no longer see the beautiful clear water next to us. We weren’t actually sure how far the ride would be since we didn’t map it out but we knew we could make pretty short work of it, or so we thought anyway. Sign after sign advertising BBQ, Ice Cream, Showers, Beer, Pie, General Store, and eventually we came to the place responsible for said signage. We sort of assumed that by getting to this oasis that we must have been pretty damn close to Polebridge. In light of this, we indulged in some BBQ lunch and a few beers when we overheard someone talking about how far it still was to Polebridge. At this point we realized we still had some riding to do, so we finished our beers and may or may not have had another before getting back on the road. Due to the washboard and possibly beer consumption along the way we managed to lose one box of wine, run over one pair of Pit Viper sunglasses, and drop the camera a few times trying to take photos while riding. We didn’t stop in Polebridge as we passed through as we were both pretty ready to get on the water and off the saddle. We spotted a decent spot to access the river with adequate space to switch from bike to boat, so we go to work. 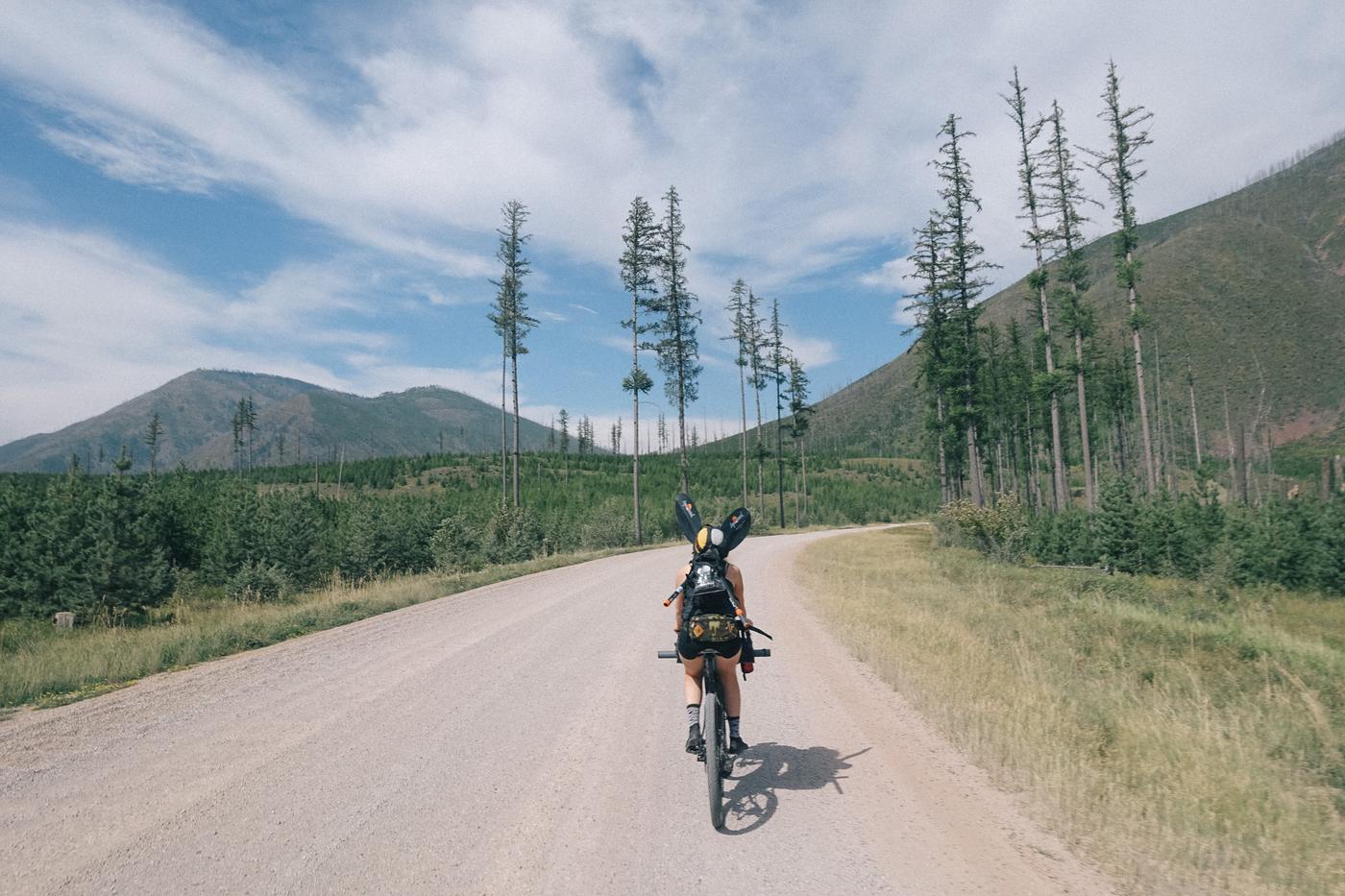 Bags in, bikes on, fly rods ready, and we are off! We both caught a few fish and I also caught my bike a few times as well, who would have thought trying to paddle with a bike on the front and fly fish would get complicated? After paddling and fishing for a while Julia spotted a nice little island that we stopped at to check out and decided to call our camp for the night. We haven’t worried too much about bears most places we’ve been, but in this area, they are a concern for sure. Bears don’t like water right? So camping an island would for sure keep us safe right? With all of our food safe in a bear canister and a few sips of whiskey from the flask Julia made me for my Bday, we quickly fell asleep next to the fire with the sound of the river tucking us in. In the morning I realized that I not only forgot to pack bowls for our oatmeal breakfast but I also forgot mugs for our morning coffee. I cleaned out our used food packaging from dinner which we re-used as bowls for oatmeal and made the instant coffee in one of our Nalgenes. 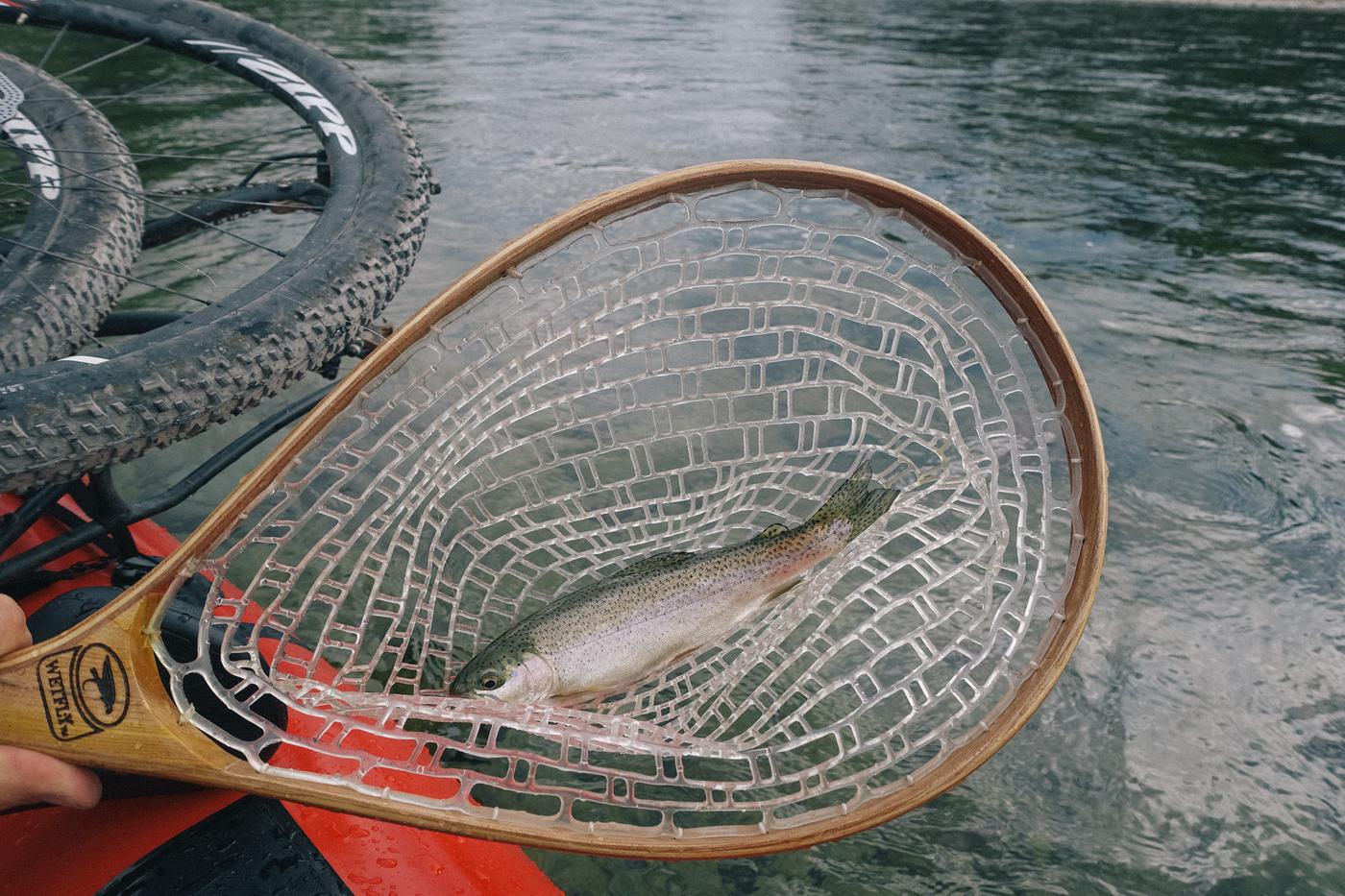 Some more paddling, whiskey, relaxing, snags, weird fish I’d never caught before and endless beautiful Montana scenery made up most the day. Then in what seemed like no time at all we rounded the last corner before quickly realizing we were already back at the campground which was where we had to take out. This allowed us to spot the perfect camp site which just happened to be on the river, right next to the campground. I pulled the van around while Julia hung out in the “not a hot spring” swimming hole on the river. We got a fire going to warm up, got the boats drying out, and this is where we ended the North Fork Float. Going to have to go bigger next time, or at least that is what Julia told me…