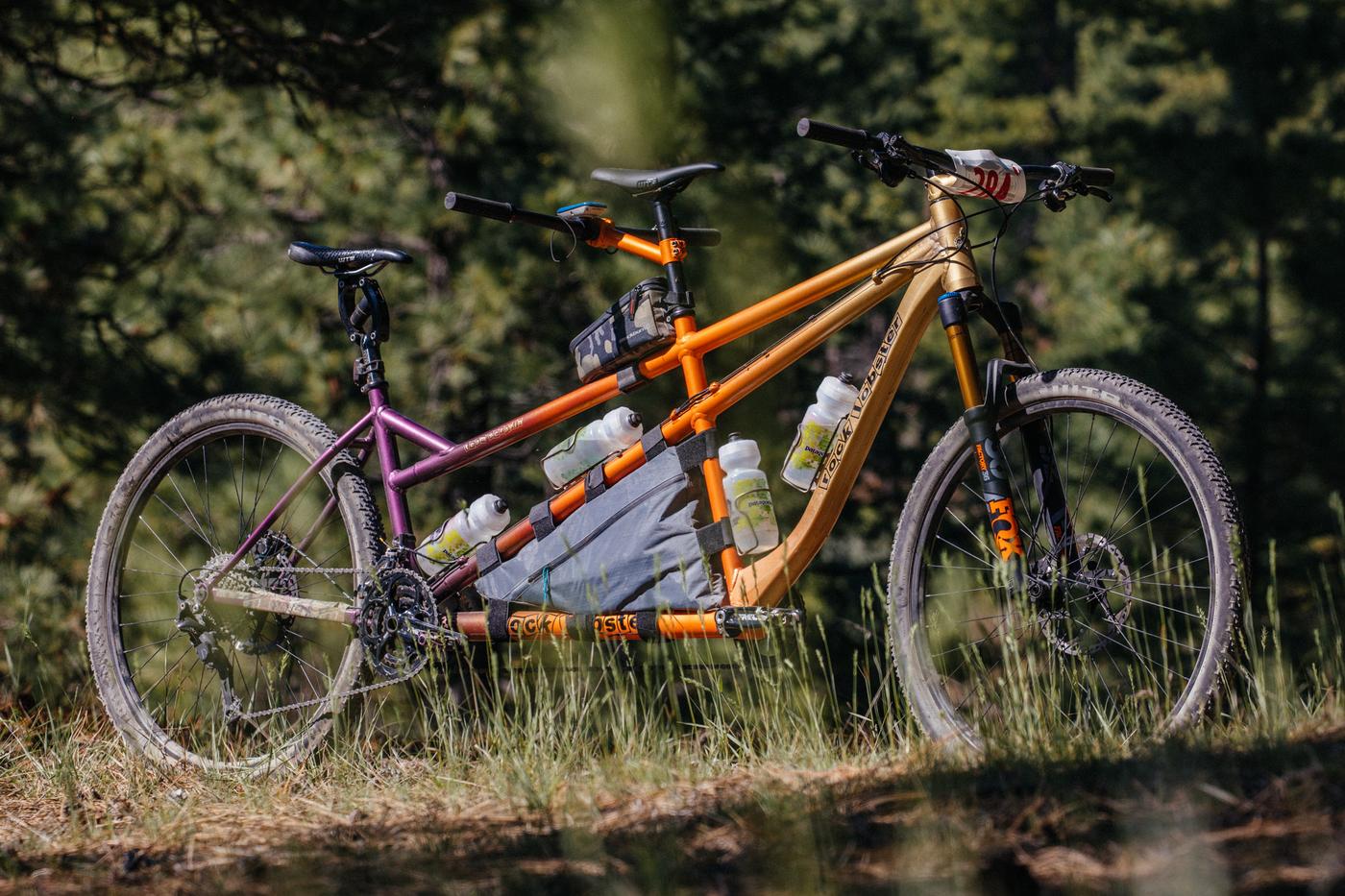 But let’s get to what you’re really here for… That crazy awesome bike!

Scott and I have been dreaming about the perfect tandem for quite some time. We considered a few stock options, but there just wasn’t a frame out there that met our needs quite right, so we did what we really wanted to do in the first place: we went custom.

Back in January, we swung by Paul Sadoff’s shop to tell him that we were serious about building a gravel grinding, technical trail riding, bike packing tandem machine. After he got over his initial trepidation, he rummaged through a pile in the corner of his shop, pulled out that crazy downtube, and said “I’ve got just the right tool for the job.” And just like that, we were in business. The downtube was originally made for Intense back in the day, but the tube manufacturer used the wrong aluminum (7005 instead of 6061), and somehow Paul ended up with one. That tube had been patiently waiting in that pile for years until we came along.

Scott worked really closely with Paul on the frame design, and he had a pretty long list of what he was looking for: stiff and lightweight aluminum tubing, one-piece top tube design from the head tube to the rear seat tube; clearance for 2.4” tires; boost rear spacing; tapered headtube; 8” rotor accommodation; triple crankset accommodation; six bottle cage mounts; rack mounts; and the ability to monster truck over anything that gets in our way.

We asked. Paul delivered. That guy seriously is a wizard. I mean, just look at that frame!

And from there, we were off to paint! And not just any old paint job was gonna do. We knew we wanted a fade, and we knew we wanted quality, so we went to Joe’s Carbon Solutions (Bicycle Painting and Carbon Repair) in Watsonville. If you’re in the area and looking for custom paint, go see Joe. We decided that the captain should pick the front color, and the stoker should pick the back color. Scott picked sparkle gold, I picked sparkle purple, and we added some sparkle orange cuz that’s a whole lotta frame to cover. We ended up with a gold-to-orange-to-purple fade that reminds you of a warm sunset on West Cliff in Santa Cruz, while drinking a beer and taking in the ocean breeze.

Finally, it was time to build this sucker. Here’s how it all came together… Fork: When it came to suspension, there was only one choice: Fox. We originally asked our pals at Fox about using a Factory 34 with 130mm travel. They urged us to use a 36 on the tandem for added stiffness and offered to reduce the travel. That’s how we ended up with a Factory 36 Float RC2 reduced to 140mm—perfect! Plus, I’m a sucker for Kashima.

Wheels: When it came to rims, there was also only one choice: WTB. But we had a problem. Tandems need higher spoke count wheels to handle the added weight and force. 36-hole rims are ideal, but WTB taps out at 32. We reeealllly wanted to run WTB, so we reached out to our friend Heather and asked if there was any chance that they might have some random 36-hole rims kicking around. The answer was no, but then she offered to get some custom drilled Frequency Team rims for us. Heather, you are the raddest. We laced those up to Hope Tech Pro 4 hubs with DT Swiss Champion 2.0 straight gauge spokes, and we were almost ready to roll. 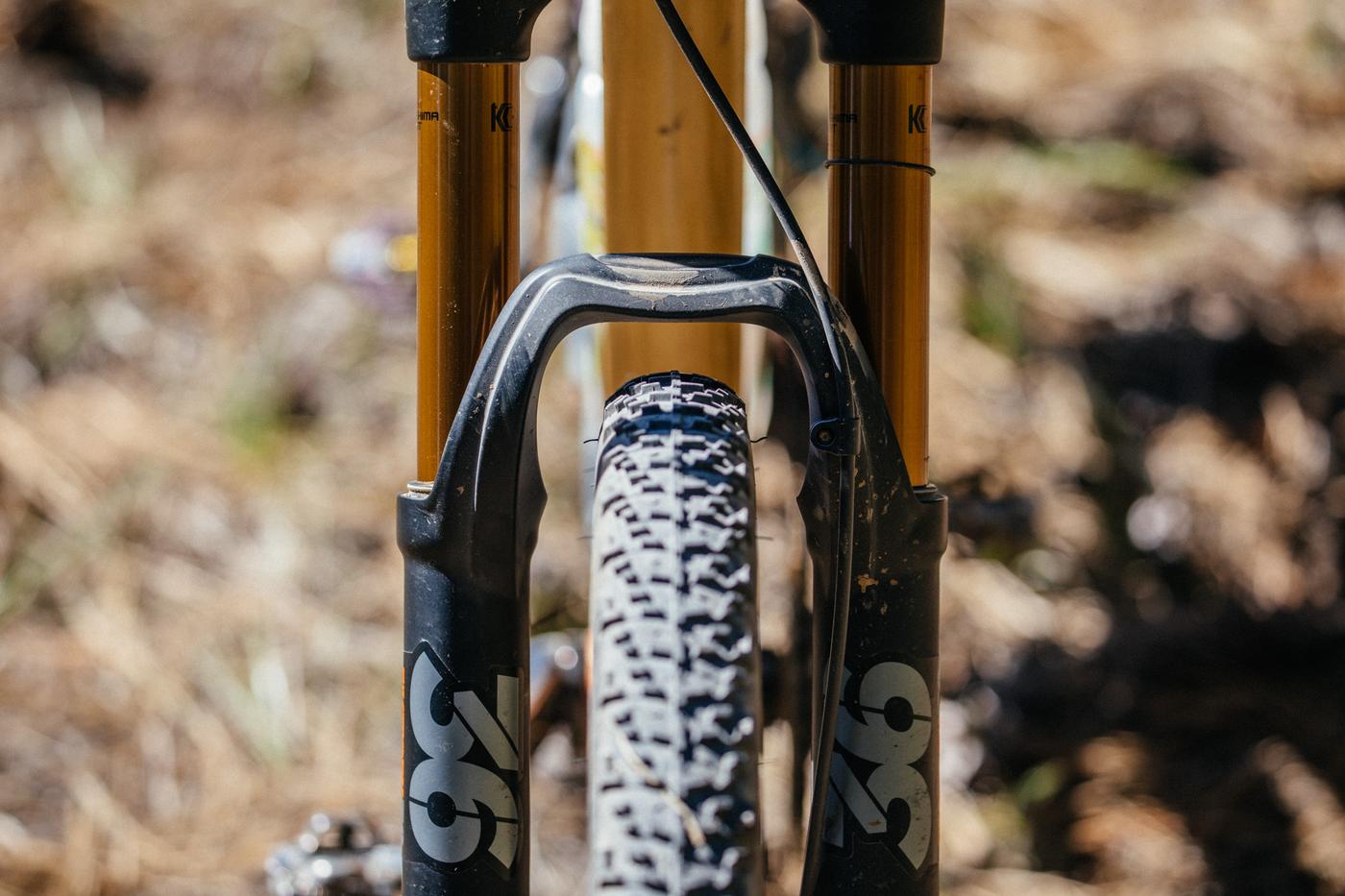 Tires: For the Triple Crown, it’s all about one bike and three sets of tires. At Lost and Found, it was the WTB Nano 2.1 front/rear. At Downieville, it’ll be the WTB Vigilante Fast Rolling/Tough Casing front/rear for droppin’ anchor when you’re comin’ in hot around the switchbacks. And at Grinduro, we’re going full mullet with a Vigilante Fast/Light in the front and Riddler 2.25 Fast/Light in the rear. Party in the front, business in the back. Drivetrain: This was a point of contention. Scott wanted a triple, and I wanted a 1x. Scott convinced me he was right, and now that we’ve ridden the bike a bunch, I’ll admit that he was. Tandems go real slow uphill and real fast downhill, so you need really low gears and really high gears. We needed more than 500% in our gear range. Scott tracked down a Truvativ Fire X Tandem Touring Crankset at Tandems.co.uk, and we had that sucker shipped across the Atlantic. We combined this crankset with the durable workhorse Shimano XT group, and it took four chains to connect all the pieces together. Brakes: You need a lot of stopping power on a tandem. Like I said, those things go real fast downhill. We used Shimano XT 4-piston brakes with giant 8” rotors. Thanks to our buddy Aaron Bradford for the custom extra-long brake hose. With all that, we can stop on a dime and skid across the finish line. Suspension Seatpost: Yeah, that’s right, suspension seatpost. If you’ve ever been a stoker, you know why this is important. We went with a Cane Creek Thudbuster LT, and this was the right choice because all thuds have been properly busted. We’re even contemplating getting a second one for the captain, stay tuned. 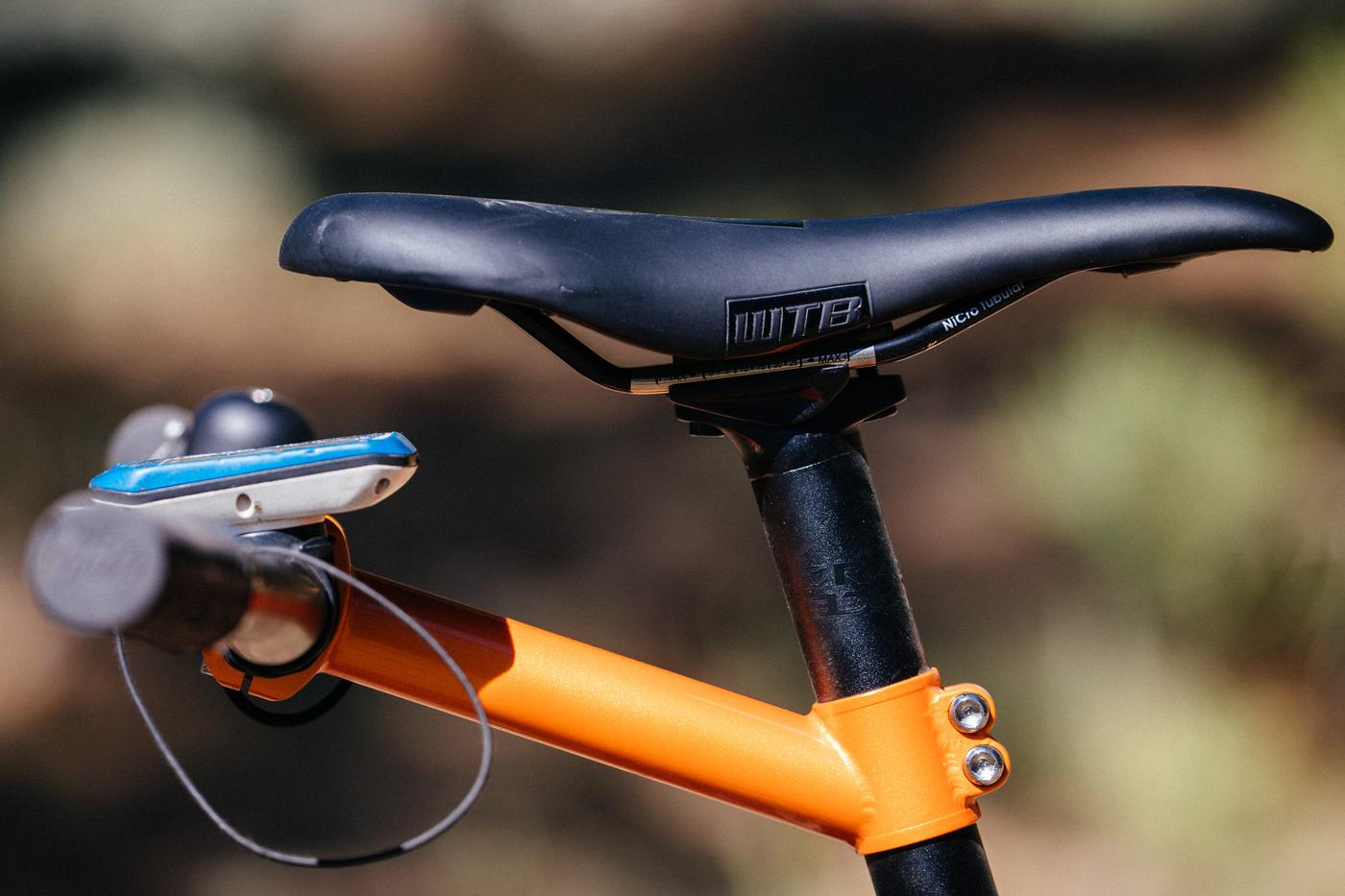 Stoker Stem: A custom tandem is not complete unless you have a custom stoker stem, and we’ve got one of those, of course built by Mr. Sadoff. Pedals: Okay, so we can’t agree on everything. Scott is using Shimano SPD up front, whatever. But check out my rad Crankbrothers Candy pedals! Who remembers that special edition purple from Interbike 2012? I knew holding onto a mint condition pair would come in handy someday. 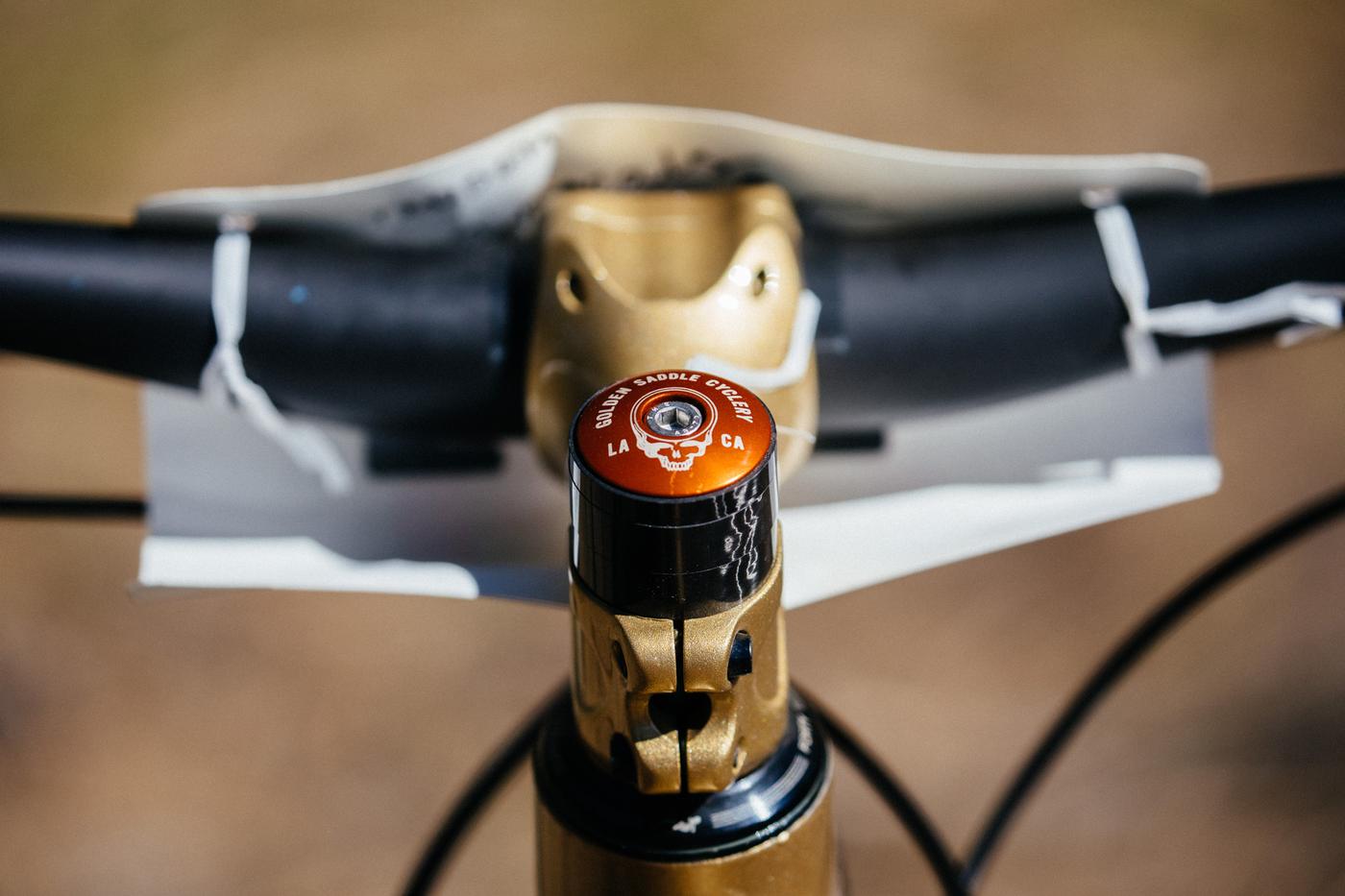 When it was all said and done, Paul was super proud of this bike, and we’re even prouder to ride it. He hasn’t built a tandem in fourteen years, and this is the first aluminum mountain bike tandem he’s ever built. The bike is simply incredible, and we can’t wait to rally the heck out of it at this year’s Triple Crown events. After that, we’ll be enjoying this mean machine for many years to come. After all, tandems are relationship accelerators, and ours is taking us straight down the aisle, full send!