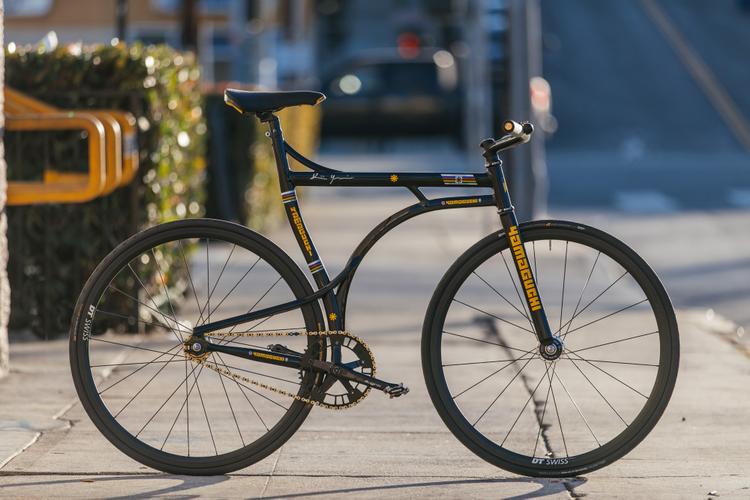 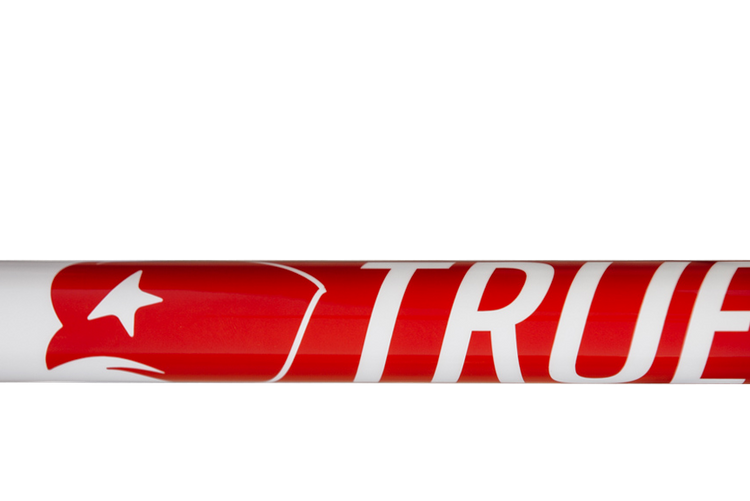 How is this the first I’m hearing of True Temper ceasing production on tubing?!

“True Temper stunned the North American custom bicycle frame building industry recently with the announcement it will discontinue bicycle tubing manufacture within the next 12 months. The May 9 announcement will have far reaching consequences for builders as well as the exclusive True Temper bicycle tubing supplier, Henry James, which had come to rely on the high quality US-manufactured tubing over the past 30 years.”

Say, for argument’s sake, that you’re the owner of Henry James Bicycles, the main supplier of True Temper tubing, various lugs and tools. You know just about every framebuilder in the USA and have seen their work in great detail. So when it comes to select a builder to construct your dream bike, who do you call?

For Hank from Henry James, he looked to Santa Barbara’s Stinner Frameworks. When he found out about the beloved Mudfoot cyclocross bikes, he wanted in, but not being on the team, Aaron and painter Jordan Low designed Hank his own paint job.

Arguably my favorite from Low, this bike has pizzaz. With matte and glossy notes, a pearl top coat and yes, stripes with fades, Hank’s bike is a show stopper. SRAM Red 22, Chris King, ENVE and cyclocross tires with minimal tread will take on the fire roads, trails and tracks surrounding Henry James’ facilities in SoCal.

In fact, this bike looks so damn good, I might have to visit them to see it in the wild… If you’re at NAHBS, swing by the Henry James booth at #636 to see it in person.

Each year, NAHBS presents challenges. Both to frame builders and believe it or not, me. As “media” it’s my job to document these bikes and deliver delicious galleries to you, the readers. Now, don’t interpret that in a negative light, because truthfully, it’s my favorite time of year.

Over the past few years, there have been plenty of spaces to photograph bikes, especially outside. This year however, mother nature dropped a blanket of ice and snow on NAHBS’ host city of Louisville, Kentucky. Which presented me with a problem…

Backtracking a bit… For the past few weeks, I’ve been checking out Google street view and photos of the convention center only to realize, I’d spend a lot of time photographing bikes indoors. Luckily, I’ve come prepared and while I don’t think everything is completely dialed in just yet, I’m a lot more confident with my setup.

Tonight, the kind people at Henry James allowed me to experiment some on their two beautiful Stinner Frameworks Disc Cross Bikes. The first one being Ryan from Henry James’ wife’s bike. Jenny’s an avid mountain biker and this will be her first “drop bar” bike. To give her confidence, Ryan decided to go with disc brakes and SRAM’s CX-1 group, the closest thing to her MTB kit. From there, Boyd‘s disc cross rims and Chris King’s components topped off this bike with ease.

As for the paint, there’s only one man who paints bikes like that: Jordan Low. His paint design and execution really brought Aaron from Stinner Frameworks’ craftsmanship… and those colors!

I tell ya, these Mosaic XSS-1 cross bikes are unforgettable. Except, I kinda forgot about posting this one. Sorry guys! Aaron and the crew at Mosaic do a superb job on these bikes, which they make for some of their local racers on a team they’ve come to call Team Single Barrel. There’s also Team Small Batch, but Single Barrel is their SSCX team. It’s a pretty rad concept, which you can read up about at Mosaic.

Now onto this bike. Daimo is, from what I could gather anyway, quite a character. The first thing he said to me was something along the lines of, “don’t forget to photograph the best finishing tape job on the team.” All It needs is some shallac! Anyway, Daimo’s bike came together great but it wouldn’t have been possible without support from Shimano USA, Chris King and PRO Bike Gear… and yes, tying off the bar tape was a nice touch. It’s not too early to be thinking about a custom cross frame from Mosaic. Holler at the boyz. For more inspiration, check out Aaron’s own suped-up XSS-1.

It’s been a while since I’ve shot a bike from Mark Majaco‘s shop here in Austin. Four years if I count correctly. In that time, we’ve both finely tuned our art. Well, I can speak for Mark anyway. This True Temper road bike is heading to the Philly Bike Expo and is a prime example of what Mark describes as a straight-forward, fillet brazed road frameset.

Built, painted and assembled in Austin, TX, these frames run under $2,000. Paired with Ultegra and you’ve got one solid machine…

As a frame builder, Ian Sutton of Icarus Frames has built many people their dream bikes. Road, track, cross, touring, light-touring and even a few mountain bikes. Most recently, he’s been building a lot of lightweight road frames with modern tubesets like True Temper’s S3.

Paired with Columbus’ oversized stays, Ian got to work on his own S3 frame. Since he doesn’t often build with this tubeset, he wanted to try it out for himself before recommending it to any customer for their own frame.

When he finished the frame, it went off to Circle A for paint and the locals here in Austin pitched in for some parts so he could get it rolling. Thanks to David from Nelo’s and Chris from Mellow Johnny’s for putting this bike together for Ian!

To top it off, Josh from Sparse sent Ian a set of lights to match.

Ian and I joked about hating our long head tubes, but that’s what we ride and for this being such a tall bike, I think it looks extremely well balanced. Now if I can just get him out into the hills! 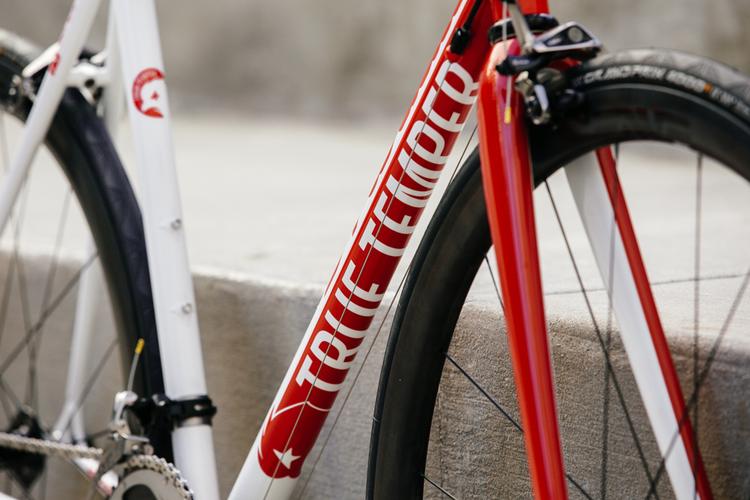 Yesterday after arriving in Charlotte, I made my way over to the convention center to see what the general vibe would be like for the next few days. After a quick pass through all the controlled chaos that is convention center setup day, one road bike really stood out.

This Mosaic Cycles road bike was built with True Temper’s S3 ultralight tubeset and painted by Spectrum, utilizing the new True Temper branding. While I’m not usually into red and white paint jobs, I absolutely love this bike.

SRAM, ENVE, Fizik and Chris King ain’t a bad way to finish it off either… the build comes in at 15.5 lbs. See more in the Gallery! 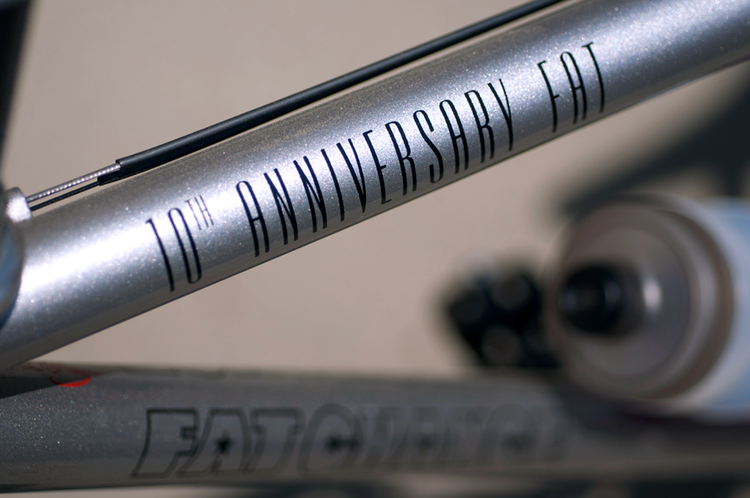 I’m one lucky guy. Since Tracko has “sworn off” posting anything but track bikes, I get all the radness that rolls through the doors at Golden Saddle Cyclery. The first of which, being the crème de la crème of the Fat Chance MTB line, the 10 year anniversary Fat.

This is no ordinary Fat Chance. The 10th anniversary frames came with a titanium, etched plate (this one’s 113 out of 200), a BOI Yo Eddy Fork and complete True Temper OX tubing. Most of which came outfitted with a full Campagnolo Record OR gruppo and were highly sought after at the $1450 MSRP (frameset). The weight? Around 23 pounds. Not too shabby and that paint job…

Those who want to read up more on the 10th Anniversary frame can check out this article from the MTB forums.

Kyle did this one justice with tons of detailed photos and he even tracked down some Campagnolo OR brake levers to replace the Avid models currently on the bike. See for yourself in the Gallery!