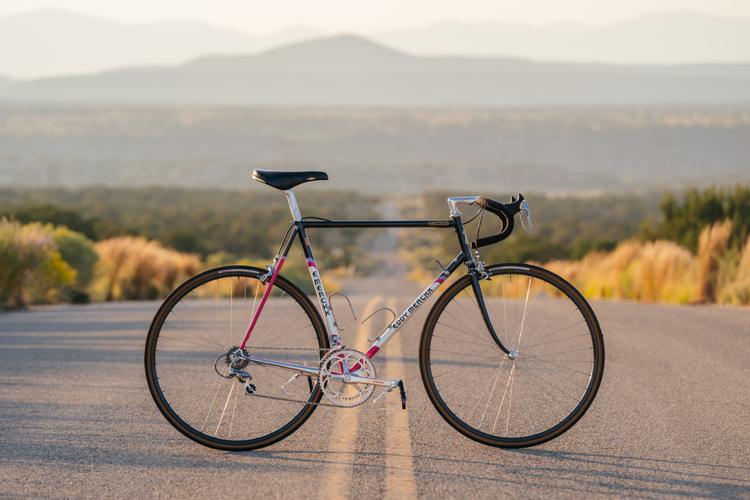 During a period of frustration with parts shortages as I was trying to build up a forthcoming review bike, I began browsing eBay looking into building up a classic timepiece. I figured if modern parts are in short supply, vintage parts have to still be available. I wanted a bike that would be a centerpiece in my office that I wasn’t afraid to ride. Something that I could do easy road rides on, not pushing myself or the bike to the limit at all, but rather just a simple machine with downtube shifters, a steel fork, and 7 speeds. Kind of like driving an older, vintage vehicle; stripped-down elegance and damn sexier than anything “new” on the market. With my longtime love of Merckx frames, I knew where to begin, but I wasn’t expecting to find one of my favorite liveries, in such great condition. Check out an in-depth look below… 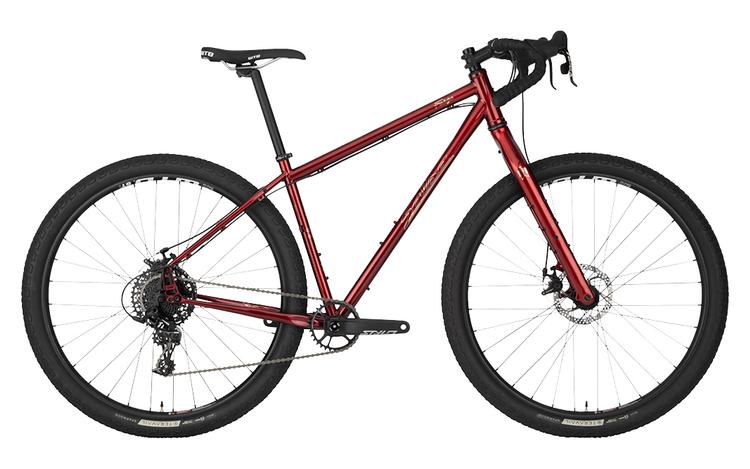 Salsa just announced their 2020 steel bike lineup including the Apex 1 Fargo (pictured here), GRX 600 Vaya, and Sora Marrakesh. From rugged bikepacking to all-road touring and bikepacking, these models are staples in the Salsa lineup, with their limitations being how long you can take off work for a tour. Head to the Salsa Blog to see more details.

A long reach caliper, steel road bike is a staple in anyone’s stable. It’s time for some Honky Tonk…

Wraith Fabrication is the new project from Stanridge Speed’s Adam Eldridge. He plans on offering steel road and cross frames, at a production cost, while keeping production in Columbus Ohio. The Hustle road frame will use Columbus Life with upgraded Life S-bend stays and a Columbus tapered fork. There’s also a cross frame coming closer to season, the Paycheck.

For those who want to support Wraith in other ways, check out the Wraith Softgoods!

Read up more below.

The girlfriend bike. Or in this case, the fiancé bike. It can be a tricky, slippery slope, especially when you’re kind of – ok really – obsessed with bicycles. When I bought this bike from Andy at FYXO last year, it came with a C-Record gruppo. Good for looking at, sucky for climbing hills – for Lauren anyway. We quickly found out that that 8-speed cassette didn’t have the gear range she needed to pedal up to Austin’s beautiful vistas…

This bike sat on my wall for about a year, collecting dust.

Dan posted this photo up on his Tumblr earlier today. It’s of the new Stanridge Speed prototype track frame. Adam and Dan worked together on what I would call a much more practical geometry. The early name for this prototype is the “Highstreet Compact”. We’ll see if that one sticks. Personally, I’m more into compact lines on a track bike, rather than a low pro and this bike looks like a beast. We’ll see how it performs tonight at the Red Hook Crit Navy Yard! 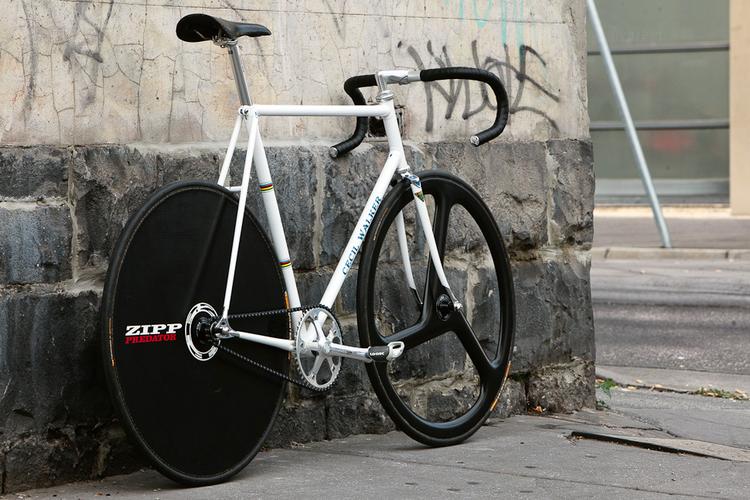 The story with this bike in particular is a common tale. As a youngster, the owner used to race at the velodromes here in Melbourne. Like many kids growing up, he rode what he could afford to and when the time came, he sold off his bikes to buy new ones.

As adults, many people track down their distant memories and relive their youth. The owner of this gorgeous 531 Cecil Walker track just recently put it together to get back onto the boards and what a build. A brand new frame, complete with Dura Ace track parts, Zipp 1150 rear and a Zipp 3000 tri-spoke front would bring out the inner child in any track racer. 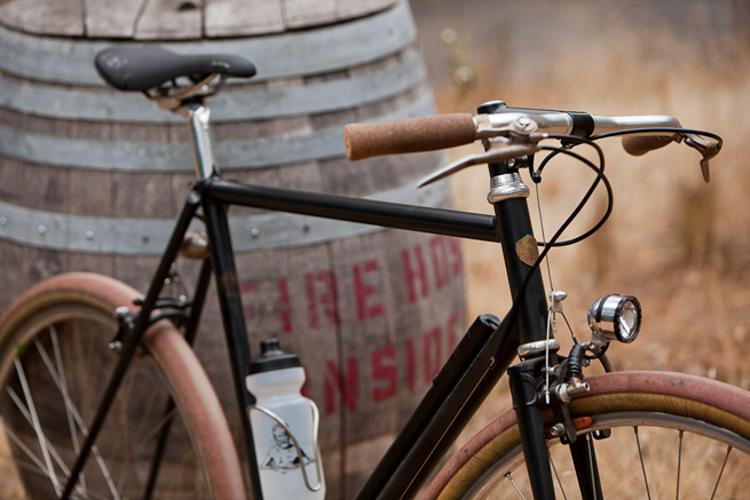 I like bikes and people that were born to get dirty. Riding steel on and off road with friends, both close and new is a great way to bide your afternoons in Northern California. I got to spend a lot of saddle time with these three bikes, all of which I’ll be posting up this week, so stay tuned.

I’m heading back to Austin, where I’ll barely have time to process before heading back out to NYC, then Philly, Pittsburgh and Portland. What a whirlwind month it’s gonna be!

Thanks for riding along. 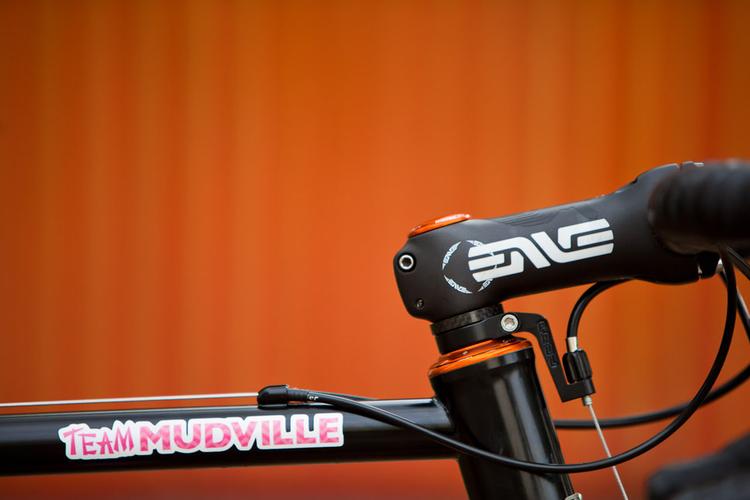 Truth be told, I put a deposit down for a 2012 Geekhouse Team Mudville cross bike before my Woodville touring bike was stolen. While I’m planning on racing here in Austin when there are local events, I’m also just stoked to finally have a cross bike to travel with. Over this past year, I’ve come to determine that a cross bike is an ideal travel bike.

You can do just about everything on them: singletrack, off-roading, gravel, road rides and even light touring. Because this bike will be 60% all that and 40% racing, I built it up initially to respond to riding in Northern California and a brevet I’ll be riding later on this month. Hence the double cages, clinchers and Ramblin’ Roll. In fact, I’m heading to Cali right now to partake in some dirt rides.

Enough of the intent, how about the bike? A few things are new on the 2012 Team Mudville models. For one, the ENVE tapered fork and headtube. It’s so big and yes, it really offers a noticeable difference in handling. The tubing selection is a little different on mine than the other bikes. Columbus Life stays ensure my big ass won’t tweak the rear end riding like an asshole or casing barriers.

I honestly don’t have tubular race wheels, so I’ll be using my trusty Profile Elite road hubs to HED Belgiums. The SRAM Force group, ENVE stem, Thomson Elite post, 3T bars all compliment the brightly anodized Chris King InSet Mango headset and matching bottom bracket. A Paul Components Funky Monkey drops the front cable a bit lower and stopping power is provided by Paul touring cantis. After getting everything dialed in, I can say that I’m really enjoying the ride.

Many thanks to Geekhouse bikes for the stellar frame and Ben’s Cycle for the parts!

Enough copy, check out the photos!

I’m so glad there are more and more production steel road bikes available now. One of which is the Tokyo Fixed Road Rocket. Steel road bikes are great for a number of reasons and I can bark about it all day but you’ve just gotta ride one to understand.

Swing through Tokyo Fixed if you’re in London and check these bikes out. If you’re not in London, you could always just look at some recent customer builds on their Flickr. Did I mention this beast has some Columbus MAX in it? 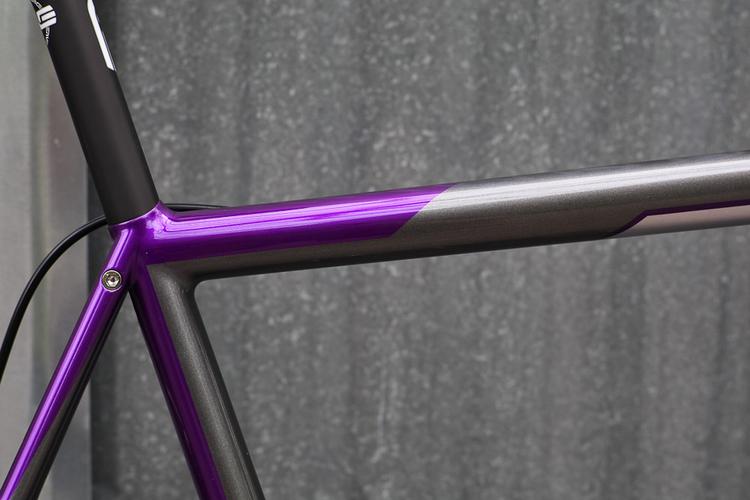 Where do I even begin with this bike? At the 2011 NAHBS, I spent the afternoon with Chris Bishop, after all the madness of the show had subsided. We rode around Austin, soaked up the sun, got lunch and chatted bikes. That’s when he asked if I would want to have a road bike in the 2012 NAHBS. Of course I wanted a Bishop road bike but I was torn. Since Chris was mostly known for lugged frames, would he want to make a modern, light, fillet frame? Hell, I didn’t even know what I wanted to be honest.

But first thing’s first. I had to get fit by Chris. After the Philly Bike Expo, I headed to Baltimore with him and Tommy, where I stayed the night and got fit in the morning. We began with what I knew, my Merckx road bike and some standard body dimensions. These became our starting point. From there, we tweaked the fit based on what kind of riding I do. Everything was dialed in on the fit bike: head tube angle, fork rake, seat tube angle, etc. Chris asked what I liked and what I didn’t like.

After some back and forth, we had a geometry and finally, a tubing selection: the downtube and chain stays are Columbus Spirit. The head tube is True Temper OX Platinum, Seat tube NOS Columbus MAX, seat stays, top tube are Dedacciai Zero. I wanted the bike as light as possible but not getting into weight weenie status so we went with an ENVE cockpit and a ENVE 1.0 fork, along with an ENVE post, which was made in the States a week before the show! Other tidbits include a Chris King No-Threadset headset and a Fizik Kurve saddle.

Since I love SRAM, a mix of Force and Red was used (not showing the Red Cassette) but I’m most stoked on the wheels. I went with Pewter Chris King R45s laced with Sapim spokes to HED Belgium Rims. Tommy built the wheels with CX Rays up front and Race spokes on the rear. But the frame is what makes the bike. Chris went to town on every single detail here. The cable stops were machined, the replacable, 7075 Paragon drop outs were machined, the pressfit 30 BB shell was hand filed and the fillet construction is pristine. So pristine that it won best fillet construction at the 2012 NAHBS. To top it off, Bryan at Fresh Frame and Tommy concocted one killer paint job, using my logo colors and my love for chevrons as a precedent.

There, enough talking, check out the Gallery by clicking the above photo or click here to open a new tab. 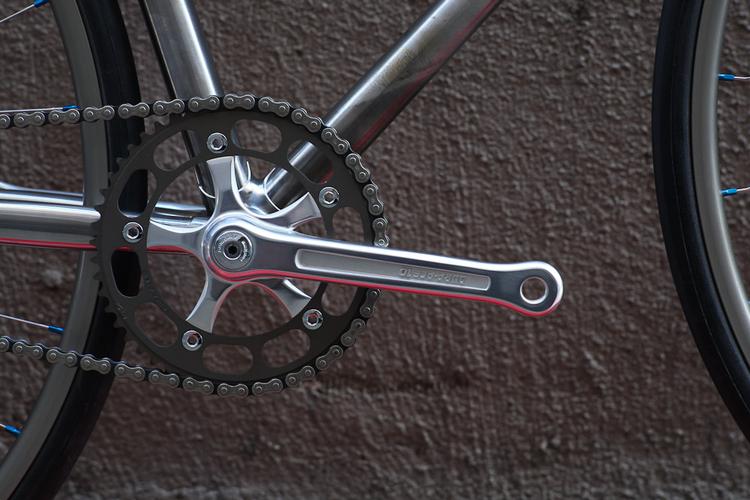 Chris Bishop cleaned up shop at the 2012 NAHBS with a trinity of gorgeous frames. He won best fillet construction, best lugged construction and this frame brought home the best steel bike. That’s the second year in a row that he’s won that for a track bike and this one isn’t messing around. There’s nothing to hide here. Each builder was urged to bring an unpainted bike for this years show, prompting Chris to complete this frame rather quickly.

This haste doesn’t show in his craftsmanship however, as each 1970’s Prugnat pressed lug was painstakingly carved and reshaped with brass. The bottom bracket was hand carved, the track ends drilled, fork crown shaped and when he completed everything, nothing but classic track geometry was left. Steep angles, tight clearances and a complete Dura Ace 10-Pitch group set this apart from the rest. I had the pleasure of photographing it in an back alley on the final day of the show. See so yourself in the Gallery below, or perhaps you’d like to buy it? Check the details out below.