So glad this video is out!

“Music For Free” is a musical celebration of wild people and places on the Great Divide from Canada to Mexico. After half a decade of musical tours powered by a bicycle, musician and poet Ben Weaver will ride 2700 self-supported miles from Banff Canada to the US Mexico border carrying his banjo and guitar giving free concerts to the communities along the way. Following the Great Divide Mountain Bike Route on its 20th anniversary year the objective of this journey, aptly titled Music for Free, was to celebrate the people who have supported this iconic route and its riders while dissecting the question “What is wildness?”.

Edited, Directed and Filmed by Keenan DesPlanques
(This film was filmed completely from the power of Keenan’s legs, he rode the entire length of the route with Ben)

You can also catch screenings of the video at the following locations and dates: 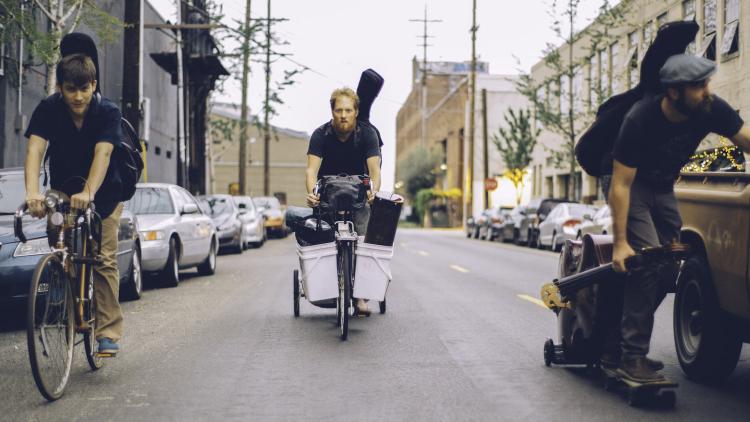 … then check out this piece on the LA band, Vignes Rooftop Revival, at NPR! 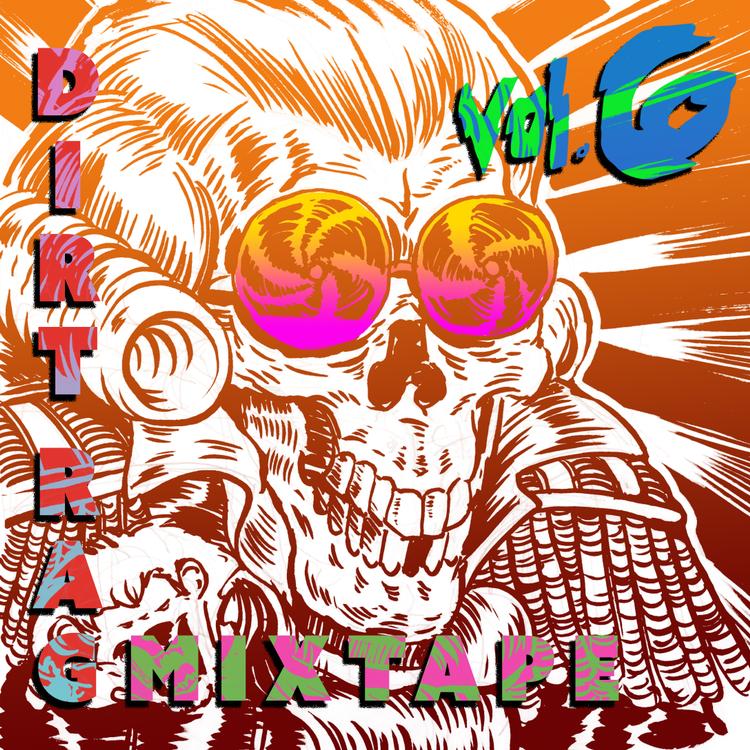 … to liven up your ride. Kyle inadvertently inspired this one, too!

“I met Kyle Kelley one rainy, chilly early evening in July 2016 somewhere in Canada. My two friends and I had been riding in the rain for about eight days straight on the Great Divide, and finally caved and decided to stay at a hostel for a night to dry out. A woman named Liz came down from the balcony to introduce herself; she was also on a bike tour with her partner Kyle, heading to a bike summit in the midwest but taking the Great Divide route for part of the way. We ended up riding with them for a few days across the Canadian border and into the rainbow mecca of dewy Montana. As the storms held on to us by our shoulders, Kyle kept repeating, “ride towards sunlight!””

Check it out at DirtRag! 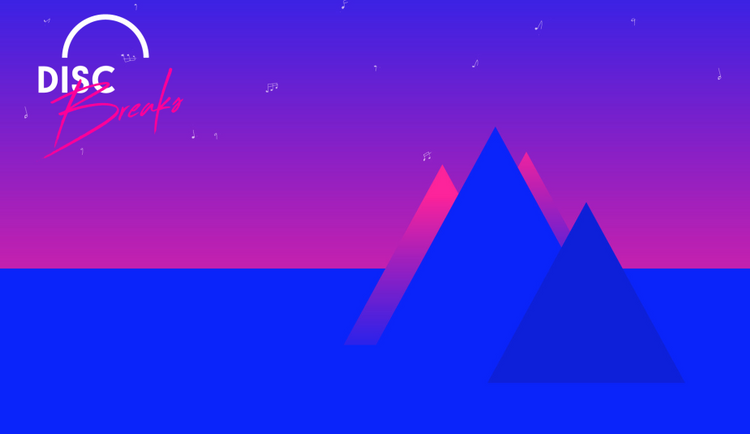 … about music. Head over to check it out! And check out Gus’ mixtape he made, based on our interview below. I gotta admit, I haven’t listened to a lot of those cuts in over a decade.

I didn’t know who Ben Weaver was before this video, but I’m glad I watched it! Check out his music at his web shop.

I’d like to think and hope that a lot of you listen to vinyl, or have always listened to vinyl. If either of those is the case, then check out these new, nifty slipmats. Black logo printed on super dense, somewhat rigid felt (the good stuff), each mat will ship in a padded mailer and easily outlive your tires.

Shipping these is pricier than I’d like, but they’re still $10 Domestic and $15 International. Limited run of 100. Scoop one up below!

Every year in the months of May and September Chris King challenges his employees to commute to work by bike. Though the majority of our staff bike to work year-round we have a number of folks who happen to live too far away to make a daily bike commute plausible, but during our bike to work challenge months they find a way. Riders are tempted by their ability to earn two extra paid days off per month and are coaxed along by workmates.

I don’t know how many of you are into TYCHO but I’m stoked on how this project with Mission Workshop turned out:

“Mission Workshop and FILTER Magazine went on tour with San Francisco band Tycho, to capture the life of touring musicians. At first glance, it can seem wildly glamorous: Late nights, different cities, fans that adore you…But look a little deeper and you’ll see that the reality of life on the road is very much to the contrary. Though there are good times to be had, the majority of a touring musician’s life is spent in transition. Transition from city to city, venue to venue, and hotel to hotel. Mission Workshop documented a set of shows just prior to the 2014 Awake tour with Filter Magazine and created a photo collection called Lucid.”

View LUCID at Mission Workshop and check out that 40-page book they printed too!

I found this experimental project to be pretty rad, mostly because I love how the experience of riding a bike as a kid can resonate through to your adult life and influence your work.

“Composer Johnnyrandom breaks new ground with musical compositions made exclusively from everyday objects. His debut single, “Bespoken”, explores the full potential of sounds generated from bicycles and their components, transcending the role of traditional instrumentation as the accepted method for creating beautiful and thought-provoking music. The following video gives a glimpse into the creative process behind this unique composition.”

Check out Bespoken on:

Last Friday, as a part of the Antigel festival, a group of track cyclists raced around the banked corners of Geneva’s velodrome while two electro bands played, Modeselektor (above) and Zombie Zombie. It reminds of something you’d see at a Six Day race. Thanks for sharing, Fred. 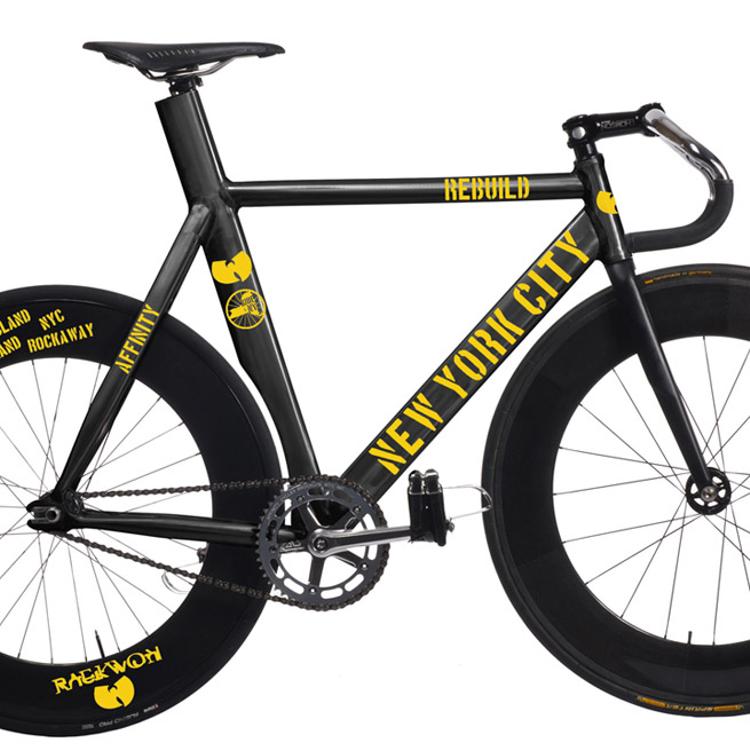 Props to Affinity and the Raekwon for putting this together for Ride4NY.

“Affinity Cycles and Raekwon from the Wu Tang Clan have come together to design 3 custom bikes to be auctioned off to aid those hit hardest by Hurricane Sandy. In typical Wu Tang black and yellow, these bikes feature some of New York Cities hardest hit areas, Staten Island, Rockaway, Red Hook and Coney Island.”

Check out more information below, including how you can purchase one of these bikes!

This is not your grandfathers country music and yet it is. I’ve been a fan of King Dude for some time now. In fact, I was at TJ’s first solo show on the east coast and have enjoyed watching him go from diving head-first into Neofolk to slowly morphing into a giant slice of Americana. When King Dude first started, it was a solo act. Shows were dimly-lit as TJ sat on a chair strumming his guitar. In recent months, King Dude has become a band, complete with a new sound and energy. The guys stayed at my house during Chaos in Tejas and I caught their show at the Parish. It was an entirely different experience.

Their new album, Burning Daylight is out October 16th on Dais Records and here’s a single from it, entitled “Jesus in the Courtyard”. You can pre-order the album now at Dais, so get on that.

If you dig this, head over to the King Dude Bandcamp and check out more. 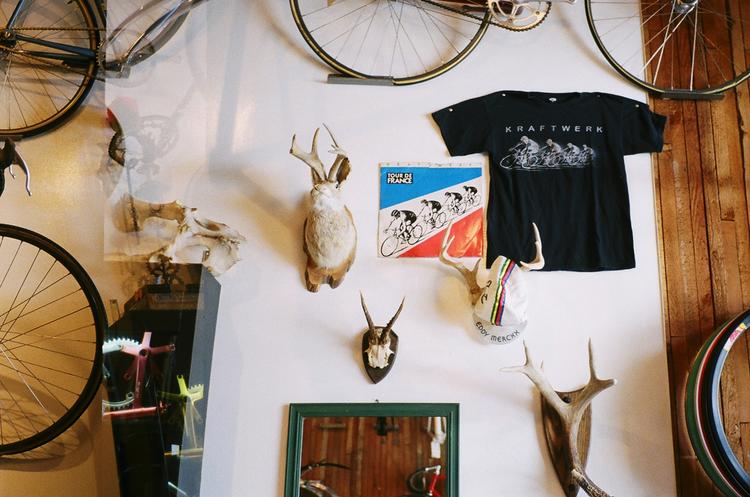 Now that’s what I’m talking about. Taken at Super Champion in Vancouver. 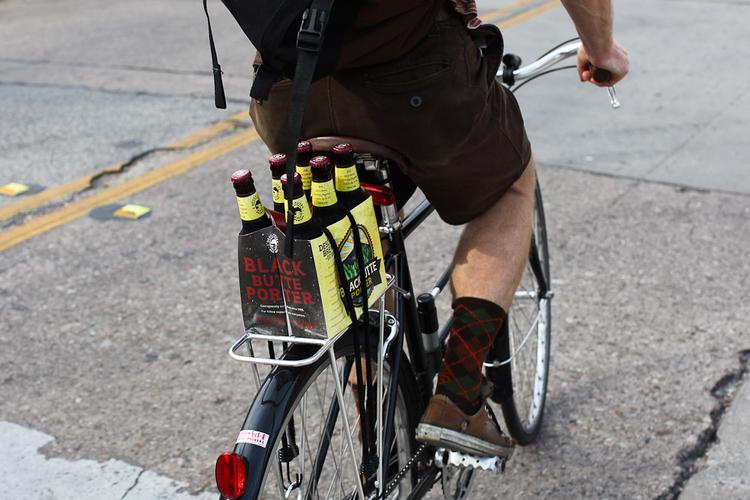 Seriously. I’m burnt out and I didn’t even go to many shows. Today was unofficially the “last” day of SxSW. The hordes of people will start heading back to their home town tomorrow and slowly but surely, the decompression and reconstruction of Austin will take place. Yesterday, I met Erik and Sofia from Sweden. In the next few days, they’re leaving on a 10-month cycle tour of the western United States called The Great Escape. I’m letting them crash with me for a few days before they begin their Raidô.

Last night was a wreck, which lead to a great ride and finally, I was ready for music. So this afternoon, I went by Barcelona to see the only DJ group / crew / bass record label I give a shit about anymore, Trouble and Bass. I’ve known these guys for years, since before this blog was even in existence. Seeing them grow and prosper over the years has been very inspiring. I made it in time for Drop the Lime and Death Face‘s sets. As the crowd became even more intoxicated by the deadly bass, the mood darkened and it was still daylight out!

Check out the gallery by clicking the image above or click here to open in a new tab. 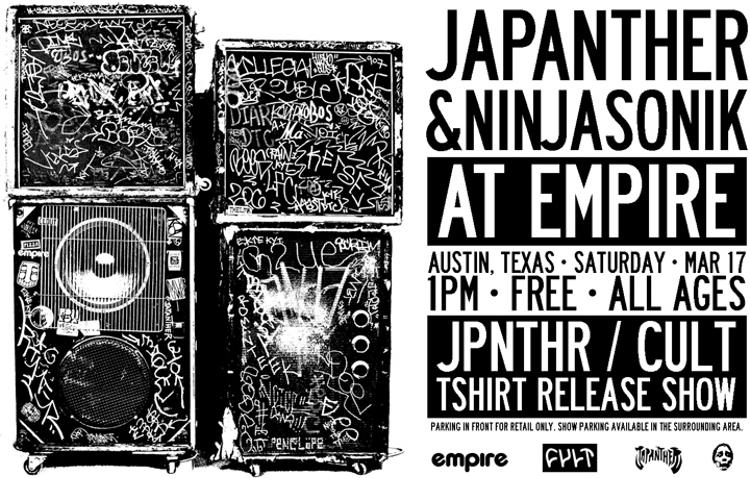 Cult just posted this up on their blog:

“Everyone is invited to join us for a free show on march 17th at EMPIRE in Austin, Texas for the official release of the JAPANTHER/CULT tshirt…Ninjasonik and Japanther will preform starting at 1 pm in the back, outside…tshirts are limited, photos coming soon…”

Be there Austin and get outta the SxSW downtown shitshow.

If you’re at work, put your headphones on. It’s time for another one of these videos.