I’m really digging this photo from a set that Matt Lingo shot with Damian Riehl on a rainy afternoon in Porland a few weeks back. Head over to RecFail to see more.

… doesn’t contain this photo – at least I don’t think it does – but it does offer an intimate and eery look at the streets of Portland. He’s got a Kickstarter going right now for Smell the [City of] Roses book. I always love a good photography book, especially from someone as talented as Damian. Even if you don’t want to contribute to the Kickstarter, have a look through his Flickr. I suppose you could flip through those like a book…

Portland is the place to be this time of year if you enjoy riding in the rain! Matt Lingo was in Portland, shooting for Chrome and got to spend time with some solid dudes. Head over to Recfail to see more! As long as Damian keeps photographing this work horse, I’ll keep posting it. Even if this Casati is in need of a quick seat stay repair. 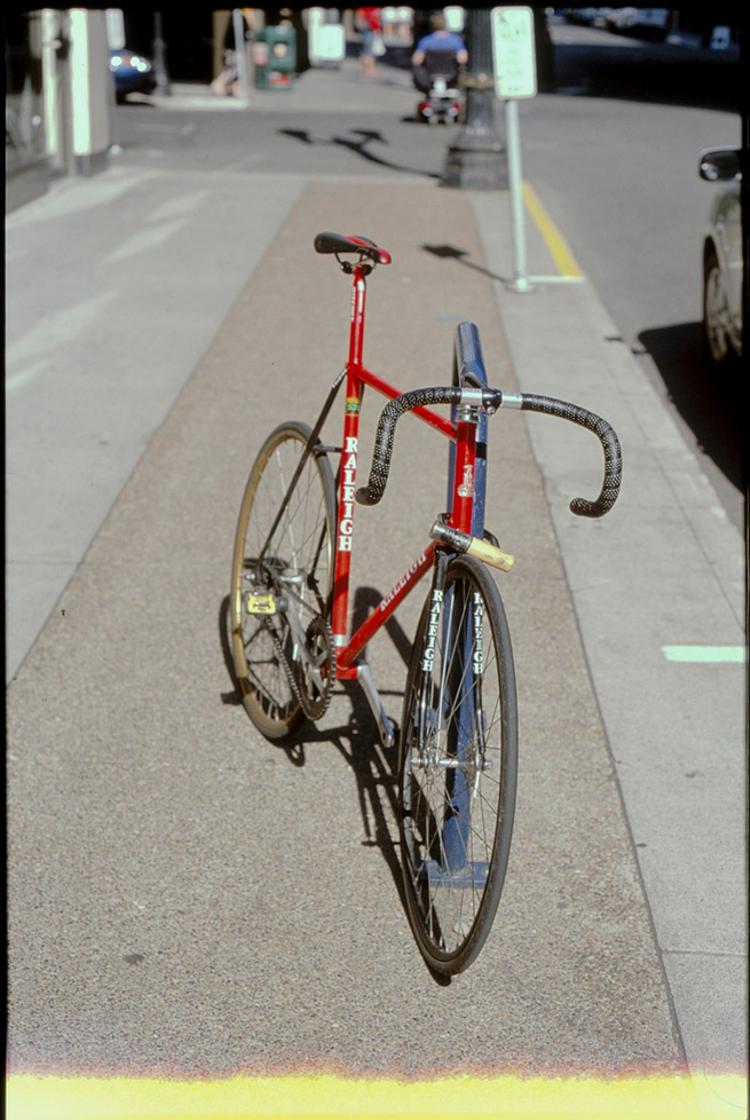 I woke up a bit late this morning and opened Flickr to find this beaut staring me down. You can’t beat the colors in Provia 100F, especially in the Portland sunlight. Loving the film burn here and that machine!

I like it when these two get together, even if it’s only for a quick photo. Damian‘s Milholland never gets old. Great photo, Brenton. 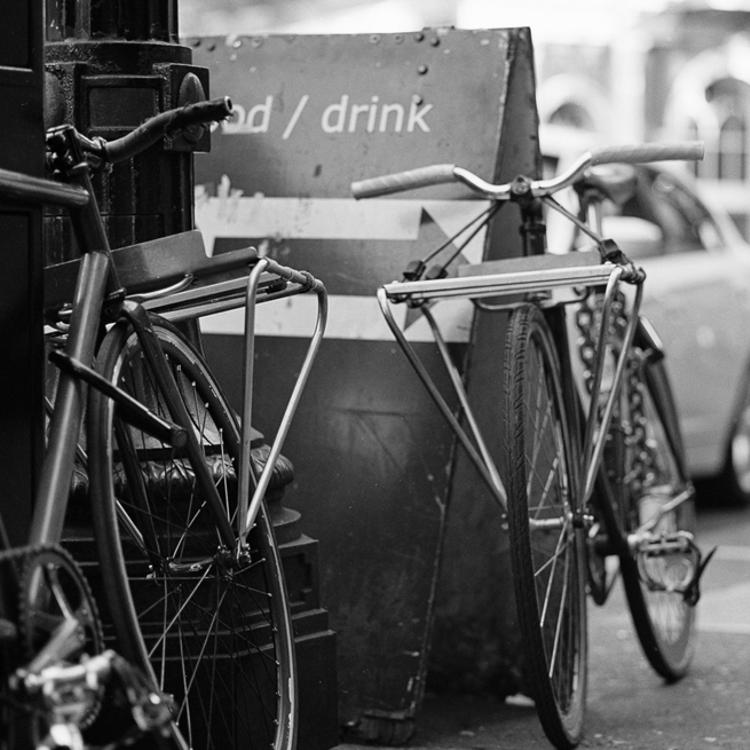 The long sought-after TCB Prêt à Porteur racks are now back in stock, at a special, 20% off discount. Pick up a made in Portland stainless steel porteur rack for only $112 at TCB Racks!

Via Shit is Riehl Damian’s photos of Portland bike messengers are always great. Take this photo of Sharkey’s hand-scrawled manifest from earlier this year. So good! 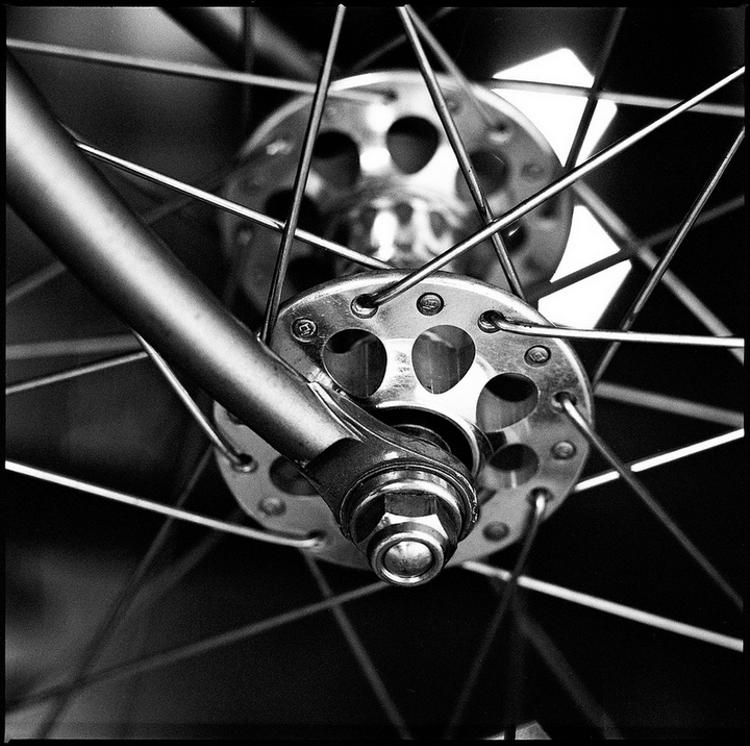 Wiping your bike down after every ride and refusing to lock it up may keep it in pristine condition but will it have character? Or a soul? Prolly not. Well used components and frames seem to sprout a personality with the patina from daily use and Damian Riehl has captured that with a few photos. This one in particular is my favorite, a 150mm shot (with an extension tube) from his Hasselblad of a Zipp hub. If you follow Damian on his Tumblr, you’ll notice his ability to capture people in very candid poses, almost like they didn’t even realize he had a camera on him. These last few photos of some of the “old dinosaurs”, as he calls them, of Portland are perfect. Head over to his Flickr to check a few more out. 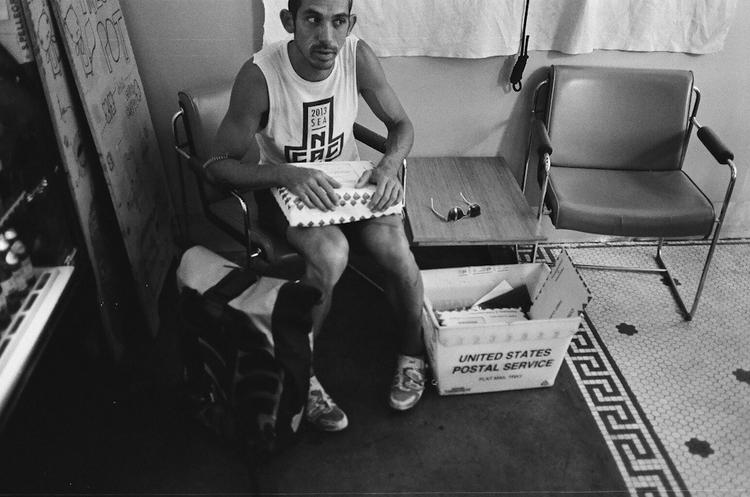 At this point Damian needs no introduction but as a man who finds himself behind the lens, more often than in front, I had to fire off the last exposures in a roll one morning. Fresh Pot is Damian’s daily digs and their coffee ain’t that bad either. Check out a few more shots below. 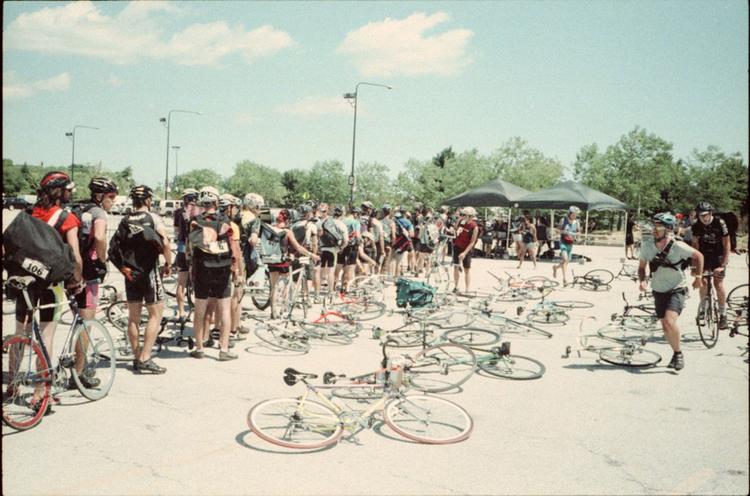 I first met Damian Riehl in Austin at the 2011 NACCCs and was immediately drawn to his photography. While the Hasselblad 500c/m is his go-to-workhorse camera, he likes to shoot various formats for big events. When I found out he was heading out to the 2012 CMWC in Chicago, I reached out, offering a platform to display a few photos in a Guest Gallery. I had no idea he’d deliver such a rad package! 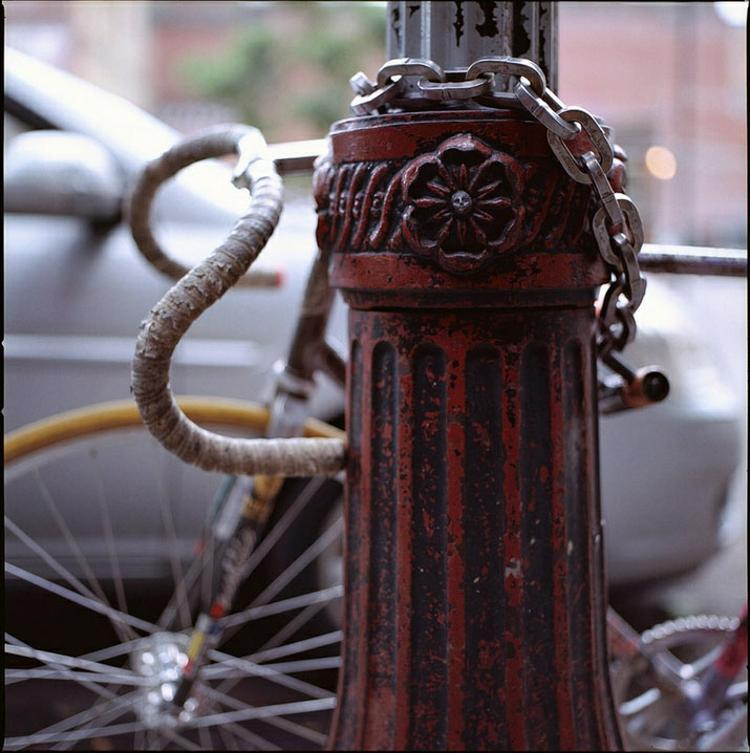 We all need a little face watching over our bikes when they’re locked up in the wild. Nice shot Damain.

Mr. Damien Riehl makes a cameo in the newest video from Sweatpea Bicycles, featuring their newest model, the Farmers Market. Aptly named for its front-end cargo capacity and still being zippy enough to handle some road rides.

Thanks for the heads up DPow!

Matt, Jerome and Chas are the Cannondale crew from Portland. I partied so hard with these guys last week and I completely blanked on taking their portrait. Luckily, Damian got one outside of PushBike. Even though he was in a #campvibes van during this 32 hour road trip, Damian got some incredible shots of long, winding roads, perfect for a bicycle. Armed with his Hasselblad, loaded with Portra 400NC and a nice focal length (40mm), he documented this beautiful bend in the afternoon sun. Check the rest out at Damian’s Tumblr.