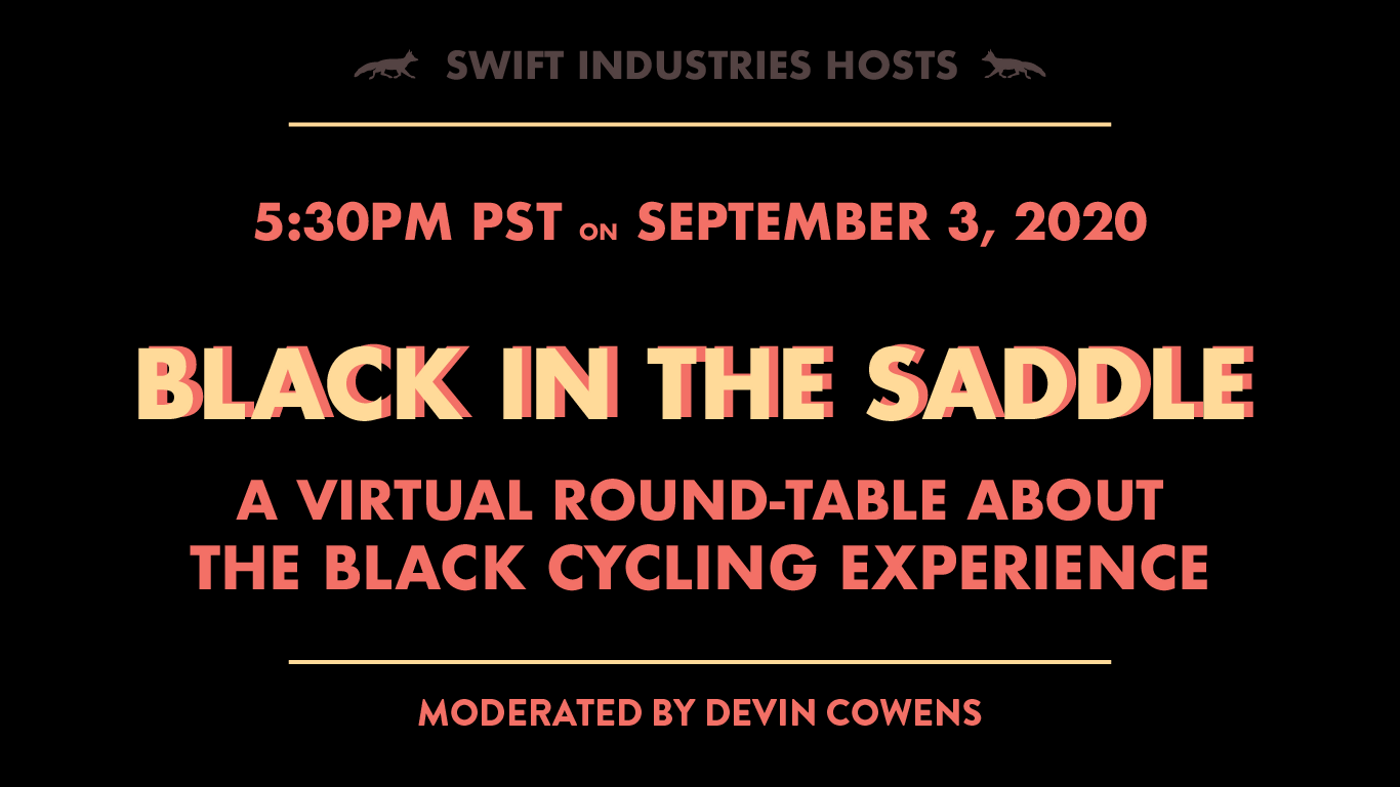 This virtual event takes place on Thursday, September 3rd, at 5:30 pm PST / 8:30pmEST, and is free and open to the public.

Expect a lively conversation around the panelists’ cycling origin stories, their most memorable adventures, and how they’ve been handling this tumultuous year. You won’t want to miss this! The culture-shaping events of 2020 have awakened the Cycling and Outdoor industries to the existence of the many BIPOC communities whose incredible stories and experiences for too long they’ve ignored. Black In The Saddle is Swift’s effort in helping to amplify these important perspectives. This project invites the brand’s fast-growing audience to get to know amazing personalities and athletes core to our adventure-cycling community. Fans can set a reminder and/or tune-in for the live-streamed virtual event by visiting the YouTube event page.

Meet the panelists below!

Info: Originally from Dallas, and currently based in Atlanta, ​Devin Cowens​ has been cycling as her main mode of transportation for ten years. She has discovered a love for bikepacking and spending as much time outdoors on bike as possible. An event planner by day, she is an advocate and organizer for Black, Indigenous, and People Of Color (BIPOC) who identify as Women, Femme, Trans, and Non-Binary (WTF NB) in cycling. She manages ​WTF Bikexplorers ATL​, a community for WTF NB riders of all experience and fitness levels in Atlanta and the Southeast. She was recently brought onboard at Velocio Apparel and invited to join the WTF Bikexplorers Gravel Team, and is looking forward to her first season as a racer!

Info: Lydia is a Black queer organizer, student, artist, and bike mechanic who has blended their intersecting worlds to creat and improve spaces for QBIPOC folx in movement around NYC. Born-again in Crown Heights by way of Chicago and North Carolina, she is dedicated to amplifying the voices and safety of BIPOC tenants and bikers, organizing against gentrification with the Crown Heights Tenants Union, and calling out discriminatory workplace practices.

Info: Owner-Operator at Transit Cycles, lifelong casual cyclist, parent, and pretty much can’t talk about anything other than my kids and bikes…and sometimes politics.

Info: Erick Cedeño is a bicycling advocate, cyclo-tourist, and the one-person-show behind Bicycle Nomad. Several years ago, Erick embarked on a bicycle tour from New Orleans to Canada which followed the historic path of the Underground Railroad. Though cautioned numerous times that he was bound to encounter hate & potentially danger as he rode through the Deep South, Erick recalls a trip that was full only of love and the generosity of strangers. Erick was determined to share the spiritual lessons he took from that fateful tour with others. This led him to found Bicycle Nomad. Erick sees Bicycle Nomad as the physical manifestation and locus of his movement to empower others via the bicycle – especially women and people of color.

Info: Originally from the Deep South and raised in the capital cities of Jackson, MS, and Baton Rouge, LA, Kaiden is an abolitionist, a cultural organizer, and an artist. Kaiden currently calls Oakland, CA home, but their heart forever resides in New Orleans!