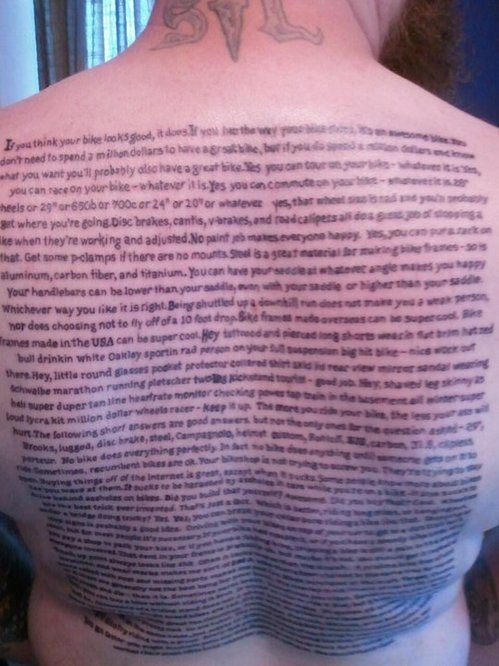 Maybe you caught a post that Surly put up on their blog a while back. I call it their mantra for all the banter that goes on in bicycle forums and blog comments. Many of which can be applied to commentary found here from time to time. Well, this guy got those words of wisdom tattoo’d on his back!

Check out the transcript below.

If you think your bike looks good, it does.

If you like the way your bike rides, it’s an awesome bike.

Yes, you can tour on your bike – whatever it is.

Yes, you can race on your bike – whatever it is.

Yes, you can commute on your bike – whatever it is.

Disc brakes, cantis, v-brakes, and road calipers all do a great job of stopping a bike when they’re working and adjusted.

No paint job makes everyone happy.

Yes, you can put a rack on that. Get some p-clamps if there are no mounts.

Steel is a great material for making bike frames – so is aluminum, carbon fiber, and titanium.

You can have your saddle at whatever angle makes you happy.

Being shuttled up a downhill run does not make you a weak person, nor does choosing not to fly off of a 10 foot drop.

The more you ride your bike, the less your ass will hurt.

The following short answers are good answers, but not the only ones for the question asked – 29”, Brooks, lugged, disc brake, steel, Campagnolo, helmet, custom, Rohloff, NJS, carbon, 31.8, clipless, porteur.

No bike does everything perfectly. In fact, no bike does anything until someone gets on it to ride.

Your bikeshop is not trying to screw you. They’re trying to stay open.

Buying things off of the internet is great, except when it sucks.

Maybe the person you waved at while you were out riding didn’t see you wave at them.

It sucks to be harassed by assholes in cars while you’re on a bike. It also sucks to drive behind assholes on bikes.

Did you build that yourself? Awesome. Did you buy that? Cool.

Wheelies are the best trick ever invented. That’s just a fact.

Which is better, riding long miles, or hanging out under a bridge doing tricks? Yes.

Yes, you can break your collar bone riding a bike like that.

Stopping at stop signs is probably a good idea.

Driving with your bikes on top of your car to get to a dirt trail isn’t ideal, but for most people it’s necessary.

That dent in your frame is probably ok, but maybe it’s not. You should get it looked at.

Touch up paint always looks like shit. Often it looks worse than the scratch.

A pristine bike free of dirt, scratches, and wear marks makes me sort of sad.

A bike that’s been chained to the same tree for three years caked with rust and missing parts makes me sad too.

Bikes purchased at Wal-mart, Target, Costco, or K-mart are generally not the best bang for your buck.

Toe overlap is not the end of the world, unless you crash and die – then it is.

Yes, you can buy a bike without riding it first. It would be nice to ride it first, but it’s not a deal breaker not to.

Ownership of a truing stand does not a wheel builder make.

Columbus, TruTemper, Reynolds, Ishiwata, or no brand? I’d ride it.

Tubeless tires are pretty cool. So are tubes.

The moral of RAGBRAI is that families and drunken boobs can have fun on the same route, just maybe at different times of day.

Riding by yourself kicks ass. You might also try riding with a group.

Really fast people are frustrating, but they make you faster. When you get faster, you might frustrate someone else.

Stopping can be as much fun as riding.

Lots of people worked their asses off to build whatever you’re riding on. You should thank them.