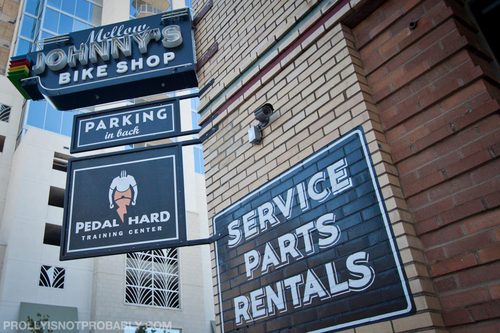 You can’t possibly live in Austin, Texas, ride a bike and not know what Mellow Johnny’s is. Fronted by one of the United State’s greatest cyclists, Lance Armstrong and Trek, Mellows is many things. A showroom for Livestrong, a full-service bicycle shop, a commuter station, coffee shop and a hub for cycling culture in Austin.

Roll along with me as I give you a tour through Mellow Johnny’s. One of the many bicycles hanging in the shop is this custom Trek townie. Both it and this Naked hang below a skylight, right above the cash wrap. But that’s not all that’s on display. Dozens of bikes line the walls and counters of Mellow Johnny’s. Including Leipheimer’s TT bike. Some of your favorite brands are there. One of the most impressive qualities about Mellows is the extensive branding. Tons of jerseys, socks, hats and other gear await your wallet. While Mellows might be a high-end shop, they cater to all facets of the varying cycling lifestyles. In a back room, Team Radioshack gear is on display for purchase. Including the team’s stable for when they roll through town. One of the easily-overlooked additions to the shop is the Track Shack. It’s about 9 square feet and lined with glass cases. Not too crazy but still a necessary addition. Downstairs is the Pedal Hard training center where adjustments to fit, training levels and other professional services are offered. The Project One area allows you to custom order a Madone. The shop has a very friendly scale. It’s not too overwhelming and the organization is pretty clear. Each section is stocked with goods. With numerous products on display. Even the mechanic’s area is easily-accessible. One of the things I didn’t document was the commuter’s station. Filled with showers and lockers, it allows commuters a safe haven to unwind before heading into their office jobs downtown. If you’re ever in the Austin area, be sure to swing through Mellow Johnny’s! Be sure you follow them on Twitter to catch up-to-date specials and news. I took a ton of photos that didn’t make this entry. To check those out, head over to my Flickr.