Fire retardant on the hills.

Los Angeles is no stranger when it comes to wildfires, even in the short time I’ve lived here and while most of the fires over the years have been in the San Gabriel mountains, I never expected to have a fire ravage my favorite place to ride, the Verdugo Mountains. You’ve probably heard of these mountains before, we post a lot of photos here on the site from their peaks, fireroads and singletrack. To give you some perspective, the dirt roads are 7 miles from my front door, with the first saddle being exactly 10 miles. The peak, at least on the road, tops out at 3,100′ and it’s a long, steep way up, with climbs averaging between 10 and 18%. 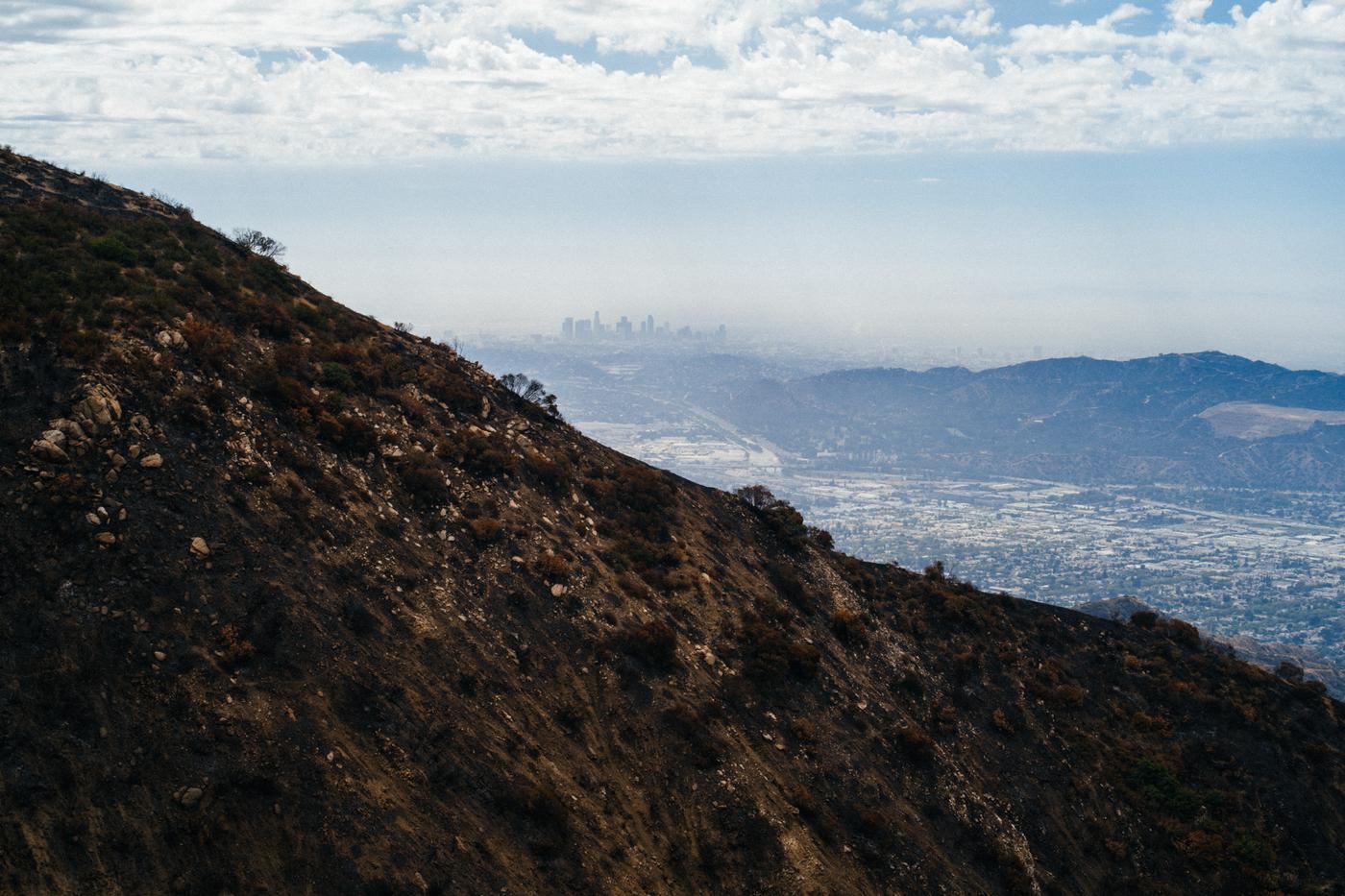 While we were up in Point Reyes on our Labor Day bicycle tour, the Verdugo Mountains were on fire. It all started in la Tuna Canyon and authorities are still trying to figure out what happened. Reports state that over 8,000 acres were burnt, from the 210 up to the Verdugo Mtwy, a dirt road that traverses the mountains. While 8,000 acres seems like a lot, luckily, the entire southeastern portion of the region remains unburnt, giving animals some much-needed sanctuary. Upon my return home from Point Reyes, I was distraught by the fire. All reports said the roads were closed and rightfully so. While the fire had been contained, the soil was still smoldering. Officials didn’t want anyone to get injured but once I saw that the Verdugos were open, I hopped on my bike to document the charred landscape. It had been a while since I’ve ridden up there. When it’s hot, the Verdugos are unforgiving. There’s no shade, no water, and the steep roads are unforgiving. The word “verdugos” literally translates to the “executioners,” after all. Usually, I avoid riding there in the summer, yet on that morning, cloud cover offered some much refuge during my morning, mourning ride.

I needed to experience this by myself. When I first moved to Los Angeles, I explored every singletrack and road of the Verdugos, mostly by myself. LA County is massive and I felt like I had my own special place up there, so the Verdugos mean a lot to me as a cyclist and as an appreciator of the outdoors. I wanted some time to myself to really soak it all in and it wasn’t easy. Hell, seeing your favorite place charred to a crisp is never easy. 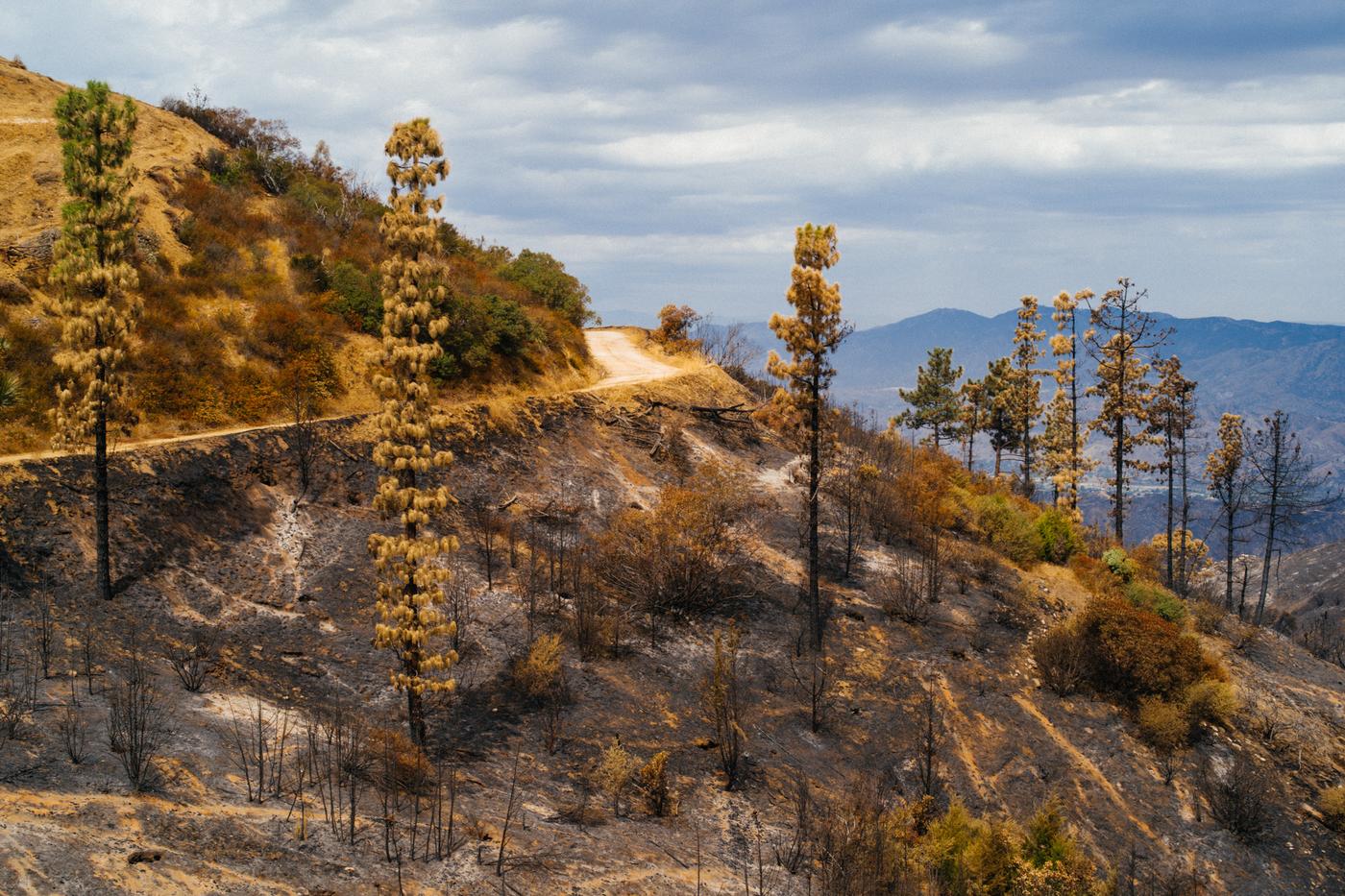 Before you point out, that fire is a natural process, hold your thoughts. This landscape doesn’t bounce back as fast as other ecosystems from fire, even though much of the vegetation is serotinous, meaning they only seed after a fire. Problem is, they need stable soil and water. A lot of the trees here will be hard-pressed to bounce back, as they are not serotinous. The douglas fir population in the San Gabriels suffered immensely during the Station Fire and only time will tell if the conifers in the Verdugos will do the same. When the trees disappear, they do so for good.

It was an emotional ride, yet I needed that, as part of my healing process. I finished with 30 miles and 4,000′ of elevation.

Two days later, after I had time to look at my photos and read more about the fire, I decided it was time to go back with someone else this round. I really wanted to shoot photos in a burn zone. Since the roads opened back up, local mountain bikes have been back riding the old trails, like nothing had happened, and took to the trails, turning once burned land into fresh, clean tracks. Kyle and I pedaled up “the hard” way, via Brand Mtwy, in the interest of time, for the sun was setting and I wanted to shoot my new Hunter MTB, along with a few photos of Kyle. We finished last night with about 28 miles and 3,600′ of elevation, in the pitch dark. While I’m still upset over the fire, it did make me feel better to appreciate the landscape, and luckily to see more animals present last night. Over the years, I’ve seen numerous birds of prey, fox, weasels, bobcats, horned lizards, alligator lizards, rattlesnakes, gopher snakes and kingsnakes. Knowing these animals will be able to return to these lands, along with us, the urban animals of Los Angeles, gave me some comfort. 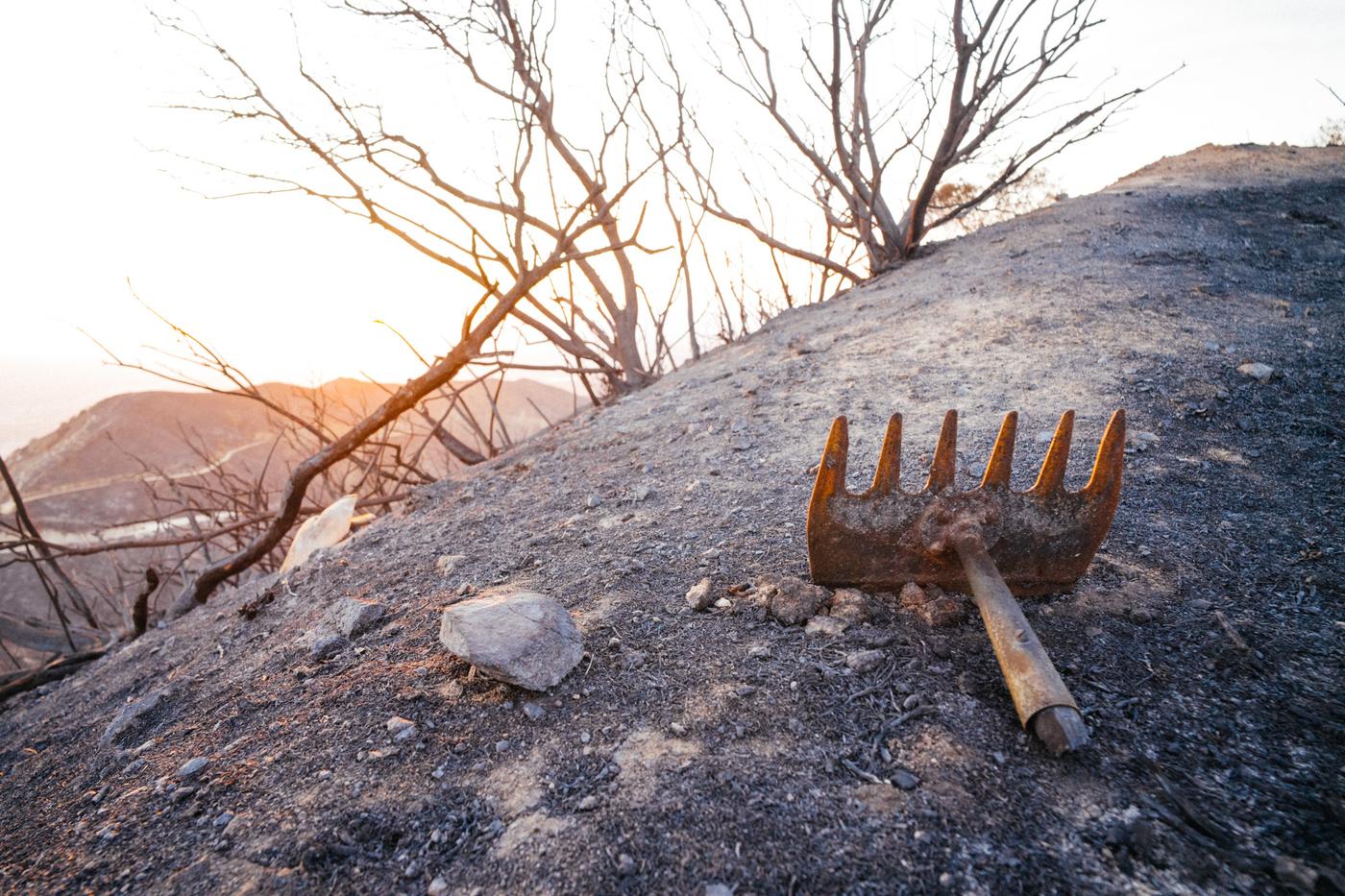 Now it’s time to get to work.