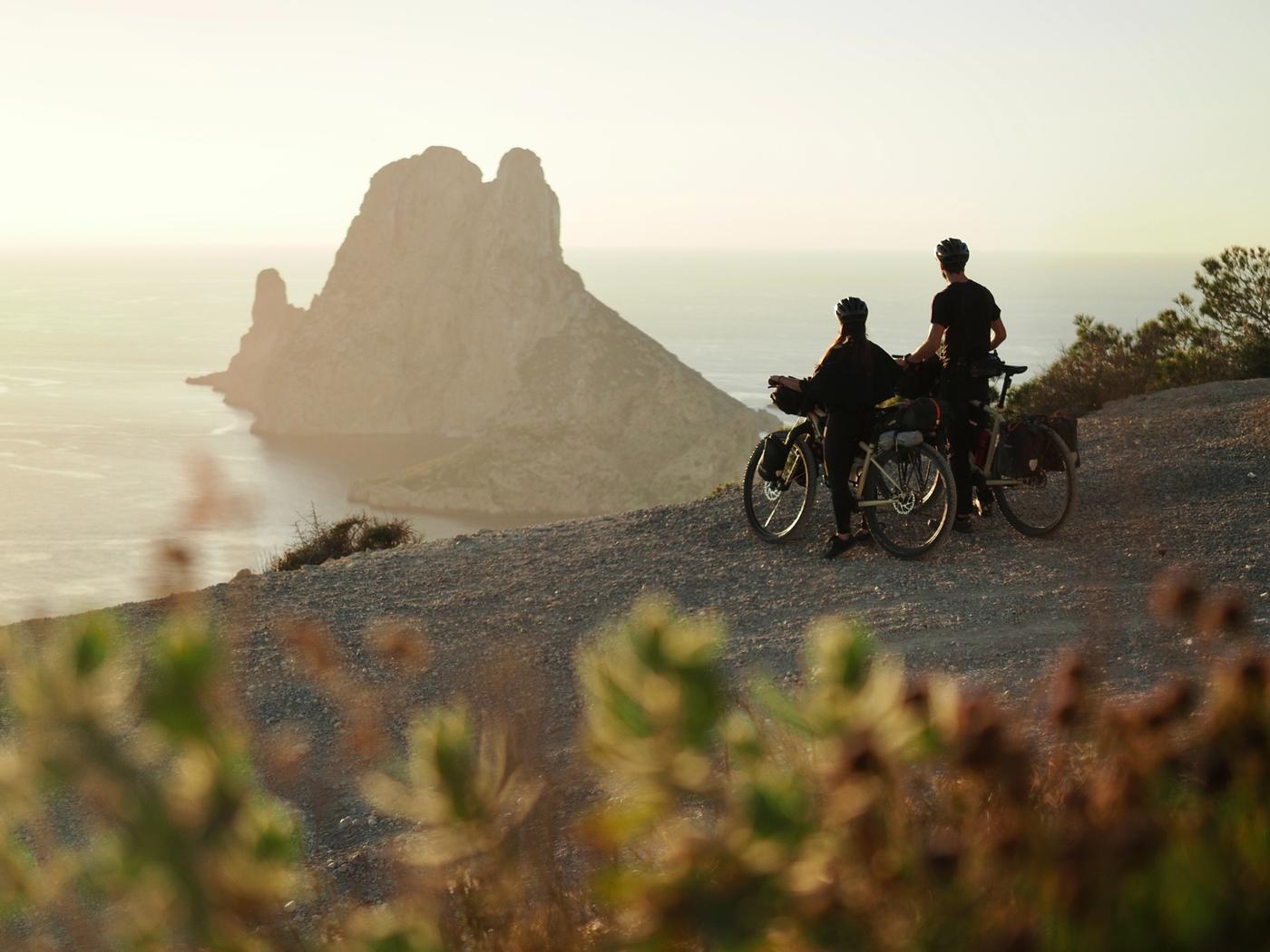 International bikepacking duo Tristen Bogaard and Belén Castelló have a special talent for looking at destinations through the lens of bikepackers. On their exploration of the Balearic Islands they sniffed out hidden gems and immersed themselves in the local culture, history, and landscape of the islands to ‘bikepackify’ them for future explorers. The Balearic Islands have certainly made a name for themselves internationally. Two things probably spring to mind when thinking about Ibiza or Mallorca: lively nightlife and golden beaches. While you wouldn’t be wrong for thinking this, there is certainly much more to discover about these islands while the partygoers are sleeping and the light of day dazzles the islands to life.

This archipelago just off the Spanish coastline in the Mediterranean Sea captured our attention due to its proximity to our base on the mainland. Without too much of a plan and convinced that we had found a promising winter escape, we set off on a Baleária fast ferry to discover the four major Balearic islands and develop a bikepacking route, which we’ve subsequently dubbed The TransBaleares.

While the four islands are separated by just minutes on ferry crossings, it was the stark contrast between the feel of these islands, and the nature of the riding that they offered, that surprised us the most. Arriving in Ibiza on a late February evening was certainly an experience. Excessively cramped clubs lay dormant next to each other on the city outskirts, as if rushingly sleeping off the hangover from last summer to recover in time for the next sizzling season. Still, we were optimistic about what lay ahead. What could be a terrible idea in the peak tourist season from May to September was now a heavenly (and almost) private winter escape. Looping Ibiza can be easily done in a handful of days. The island has countless possibilities for all kinds of terrain, so to keep it exciting, we chose to mostly follow gravel tracks or quiet roads, occasionally deviating onto an unexpected track that would usually lead us to a viewpoint. If there’s something you’ll get plenty of, it’s these panoramas over majestic islets and funky rock formations jutting up from the water’s edge. 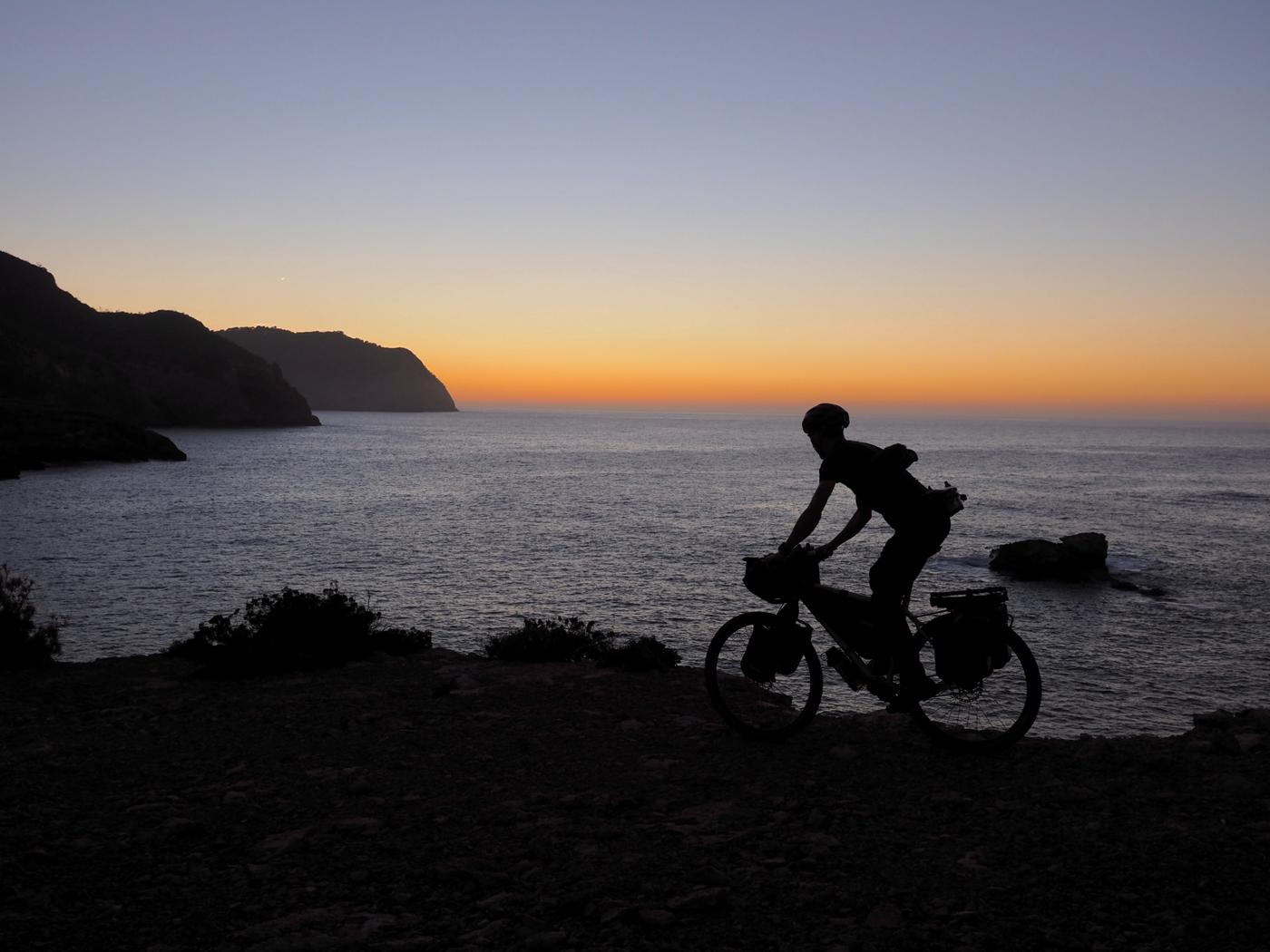 The sharp contrast between the areas designed for tourists and those where the locals actually lived was one feature of Ibiza that stuck in our thoughts. Since the coastline is reserved for seasonal visitors and the very wealthy, often owning massive plots of land with secluded, flamboyantly white properties, you’ll mostly find the locals settled in the cities or around the small villages further inland.

Our loop passed through some of those charming inland towns, including Santa Agnés de Corona and Santa Eulària des Riu. In those more authentic settlements, the sense of day-to-day life is always palpable, and you can sit down to enjoy a fresh slice of toasted bread with tomato (or ‘pa amb tomàquet) and a hot brew year-round. More like a Caribbean island in the Mediterranean Sea, Formentera is located just nine kilometers south of Ibiza, easily reached on a 30 minute fast ferry with free carriage for bikes.

Even though the island is tiny, we took our sweet time circling it, spending three days soaking up a sense of the place. Cross your fingers for a clear sky and bright sun to fully appreciate the jaw-droppingly beautiful blue tones of these crystalline waters. Blessed with good weather from the outset, we simply couldn’t keep our eyes away from the hypnotizing water, so slowed our pace to follow a bumpy singletrack along the rugged shoreline. If only it would’ve been slightly warmer, we would’ve had no hesitation in answering the inviting call to take a dip! 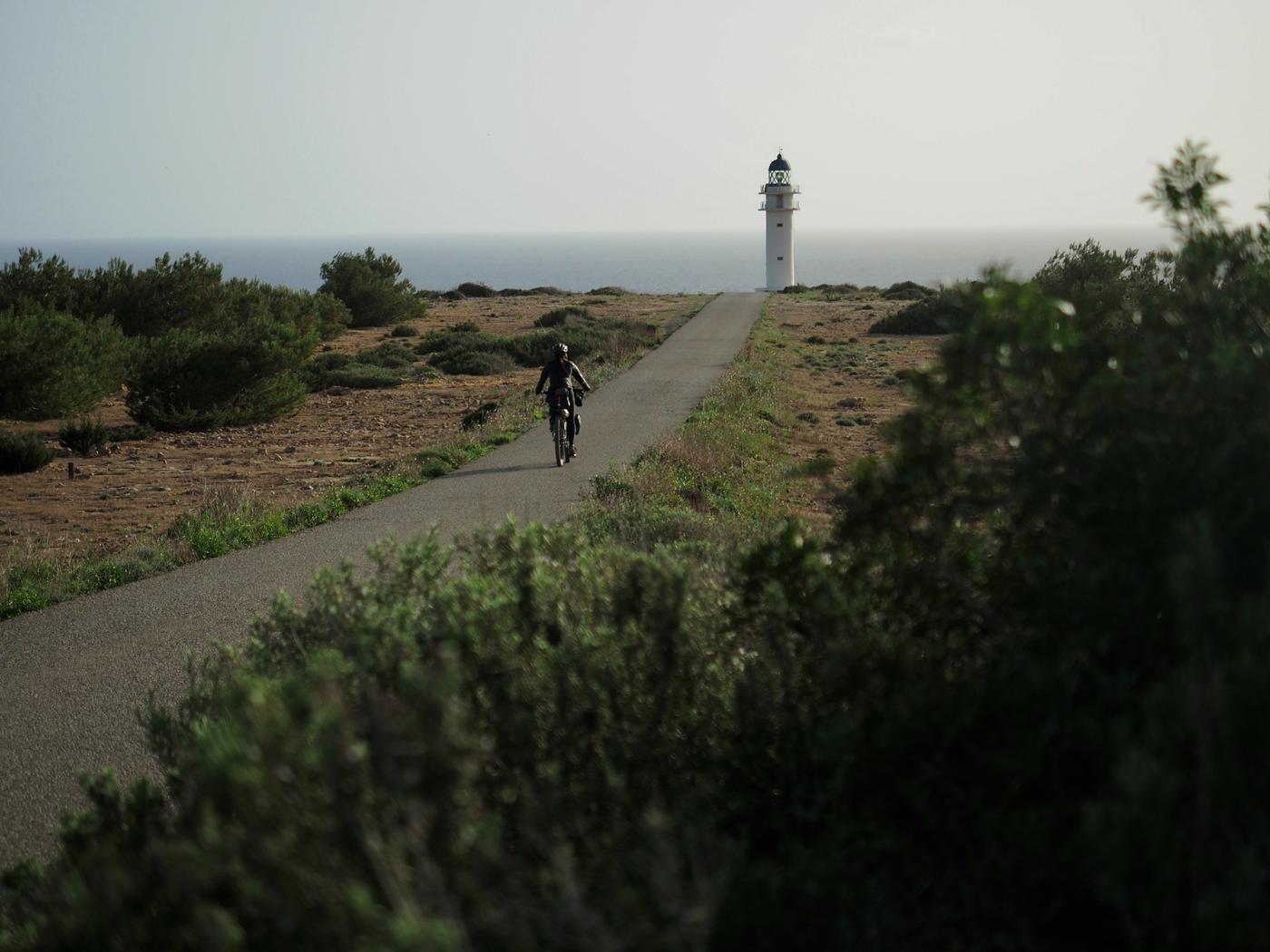 On our way, we crossed a couple of defense towers, built in the 18th century to watch out for pirates, and soon discovered one of the island’s highlights: the lighthouse of Cap de Barbaria. Sited at the southernmost point of Formentera, on a majestic vertical cliff 100 meters above sea level, it’s dry and rocky with the call of seagulls filling the open sky above. We were unsure if anyone had ever lived at this lighthouse, but if so, the experience must’ve been remarkably solitary.

Having so many deserted beaches and expansive views entirely to ourselves for a few days felt incredibly special, which is why we can’t recommend enough that you ride this island in the low season. Given its petite size and the multitude of gravel paths, this is a very bike-friendly island for a long weekend escape. 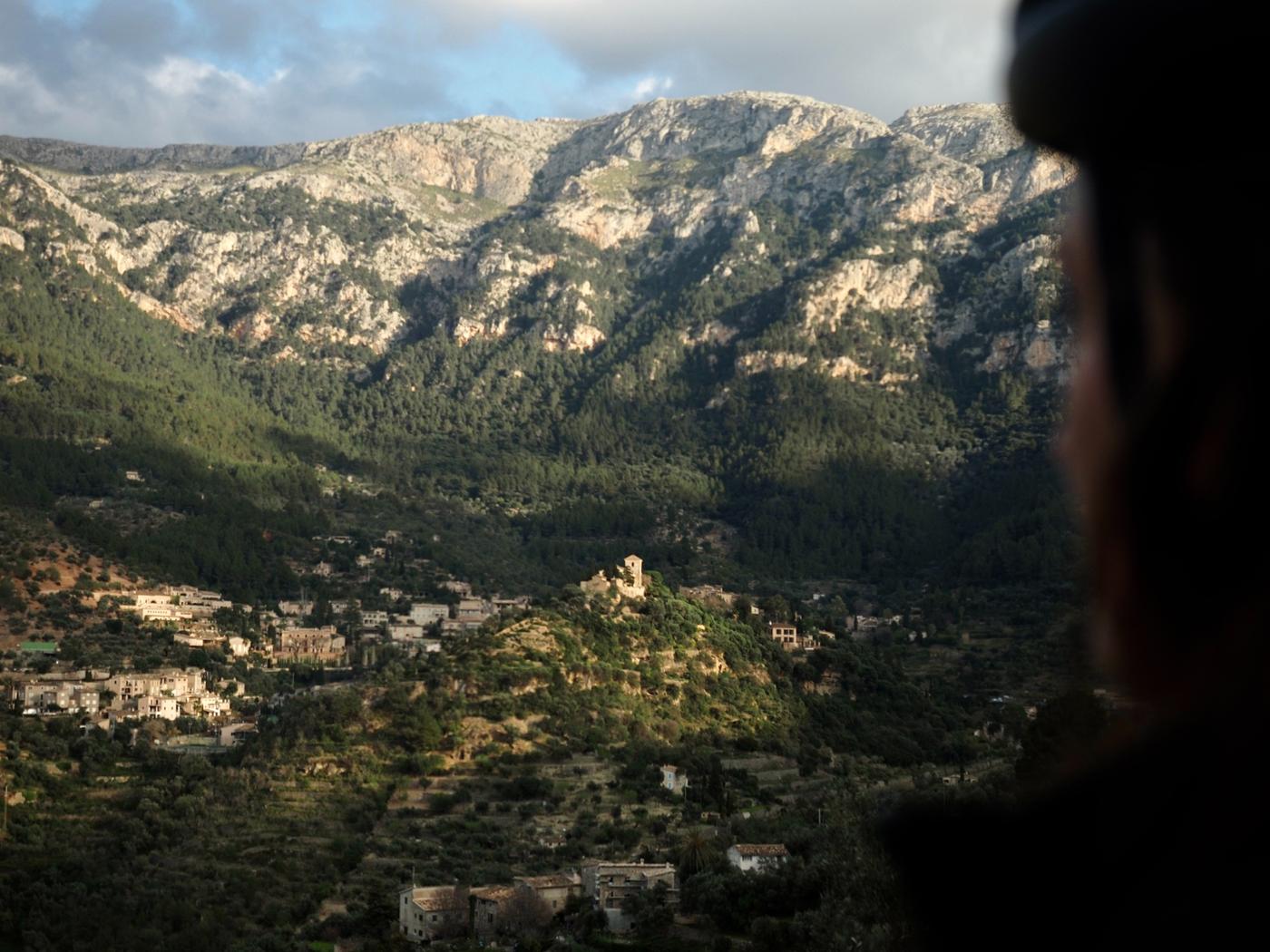 Mallorca – A Piece of ‘Roadie’ Heaven

Some call Mallorca a cycling Mecca, due to the countless sweeping roads of pristine tarmac gradually winding their way up and down the many passes throughout the Tramuntana Mountains in the north.

In stark contrast to its neighboring islands, it felt like Mallorca desperately wanted to keep us on the asphalt. Most of the gravel paths led us to frustratingly fenced dead-ends or private property. We have since found out that it’s all too common to try an off-road section on Mallorca and ride right into one of these traps. A good, yet challenging, alternative is the GR221, a popular trekking route across the mountains which can be ridden in a few sections, as we tried, though you’ll need sturdy bikes with wider tires. On the other hand, the roads are so well exquisitely maintained that it didn’t seem such a shame to follow them. Though this paved playground is peaceful in the shoulder seasons, avoid riding in the winter as there can be snow at higher altitudes. For us, Mallorca is offered so much more than simply pedaling. The postcard-worthy villages like Valldemossa or Sòller seduce you into pausing for a drink or meal at the many quaint restaurants and cafeterias hiding around the most charming nooks. And when you do stop, we recommend you try out some of their local delicacies, including ensaimadas and cocas – delicious puff pastries made in a unique way that you’ll only find here in Mallorca. It’s a true delight that cyclists are warmly welcomed on this island. Most guesthouses and hotels are prepared to welcome both you and your bike, offering safe storage space, pumps and tools. Camí de Cavalls is a 185-kilometer path circling the island of Menorca, only really recommended for mountain bikers (or persistent bikepackers like us). The demanding terrain is completely unrideable along many stretches, so one for the hike-a-bike enthusiasts for sure!

Fascinatingly, the route has only been open to the public over the last few years, thanks to the persistent demand of Menorca’s residents. Previously the Camí de Cavalls was inaccessible due to the level of private land, just like in Mallorca. Unfortunately, this still means that once you get onto the track, you can’t freely deviate with a turn off track until the next public exit, which might be a few treacherous kilometers away. You’ll need to keep a close eye on your water reserves, as well as food and your energy to push forward on these sections where the distance seems to stretch out before you.

While it presents its own challenges, the Camí de Cavalls does also yield a very private experience with views definitely worth the challenge. Menorca is a UNESCO Biosphere Reserve, protecting the island from damage of mass tourism, so you really can enjoy a unique flavor of wilderness that is very rare in the Mediterranean. Even though we loved the isolation of the trail, and its challenging level of technicality, the threat of an incoming storm forced us to cut our planned route in half and take a shortcut through the center of the island. After what ended up as a tiring three-day stint, we arrived in Ciutadella, ready to head home on a ferry to the mainland. If you find yourself on the Spanish east coast with anything between a single week and an entire month to spend, you should absolutely consider exploring one, two, three or all of the islands, each with their own unique flavor. Thanks to the many easy ferry connections there’s always room for flexible planning. As on any Mediterranean island, you’ll live a micro-adventure that feels like a full-on vacation, and will no doubt leave you with riding memories to cherish. 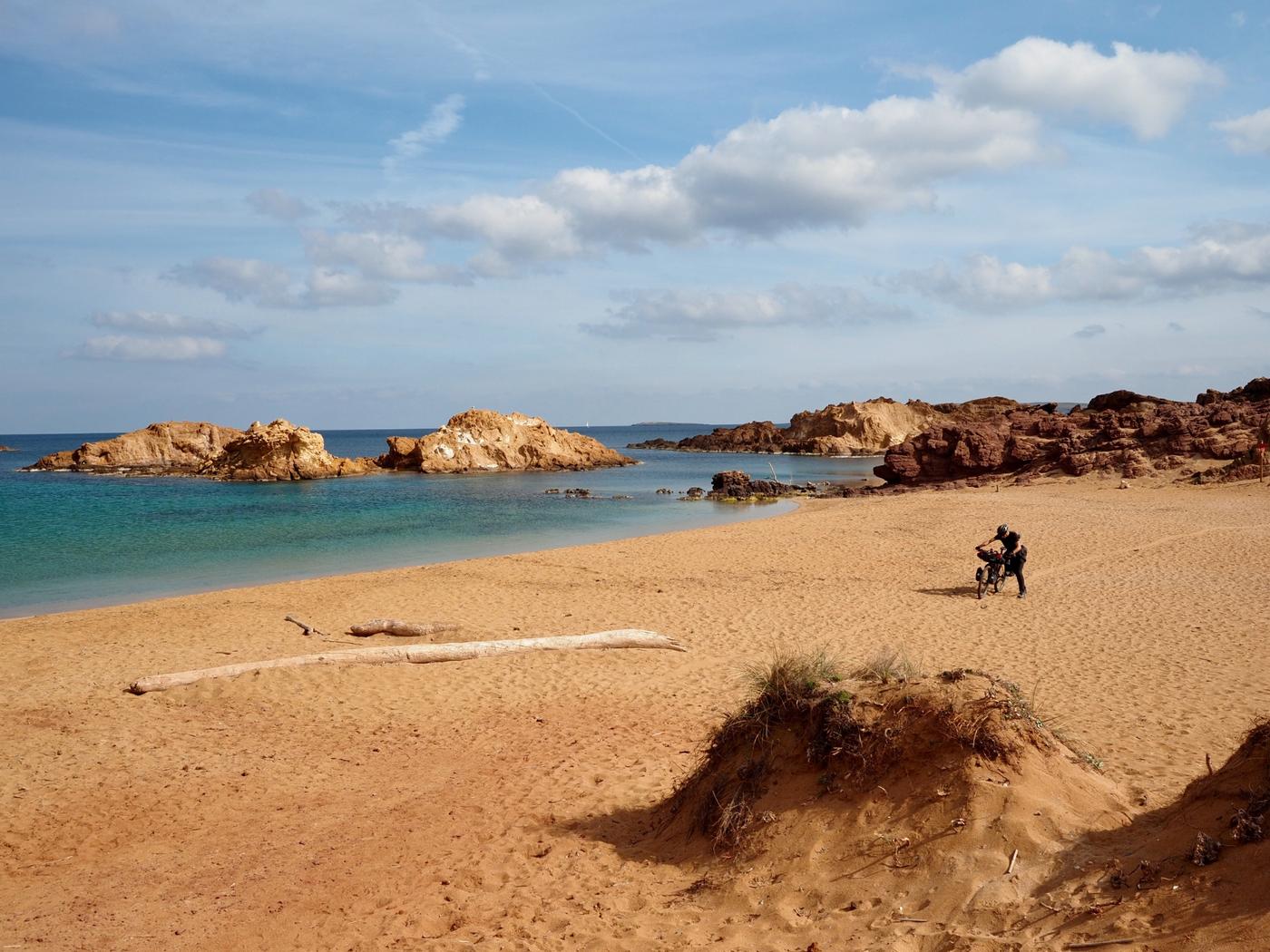 Tristan Bogaard and Belén Castelló are well-traveled adventure cyclists, authors and bikepacking photographers. The international couple have ridden in numerous countries and pioneered routes from Kyrgyzstan to northern Spain and Italy since 2017. They share their experiences through route report videos and stunning photography which has been collected and presented in two coffee table books: 50 Ways To Cycle The World and Bike Life. Besides being dedicated to inspiring more people to try traveling by bike, the couple also host a number of guided trips.

This article is part of a sponsored partnership with Komoot. We’ll always disclose when content is sponsored to ensure our journalistic integrity.