Radavist Ride with Advocates: Joe and Amber, Save the Dells

Radavist Ride with Advocates: Joe and Amber, Save the Dells
Words and photos by Locke Hassett

When you say “mountain biker” to most people, the image of a baggy shorted, full-face-helmeted, taurine fueled adrenaline junky schralping berms and cutting switchbacks with little regard to the world around them comes to mind. The mainstream MTB media doesn’t help that image much, and bikes with names that evoke human dominance over landscape exasperate the narrative of a sport that is more concerned with KOM’s than connection.

We are criticized for not “showing up” to the table of conservation issues, and as a recreation group, we are often seen as a self-interested group of shredders. Trying to gain access to everything and terrify hikers and equestrians alike, drafting legislation that concerns hardline conservationists, and generally going too damn fast. Let’s face it, the sport has an identity crisis. 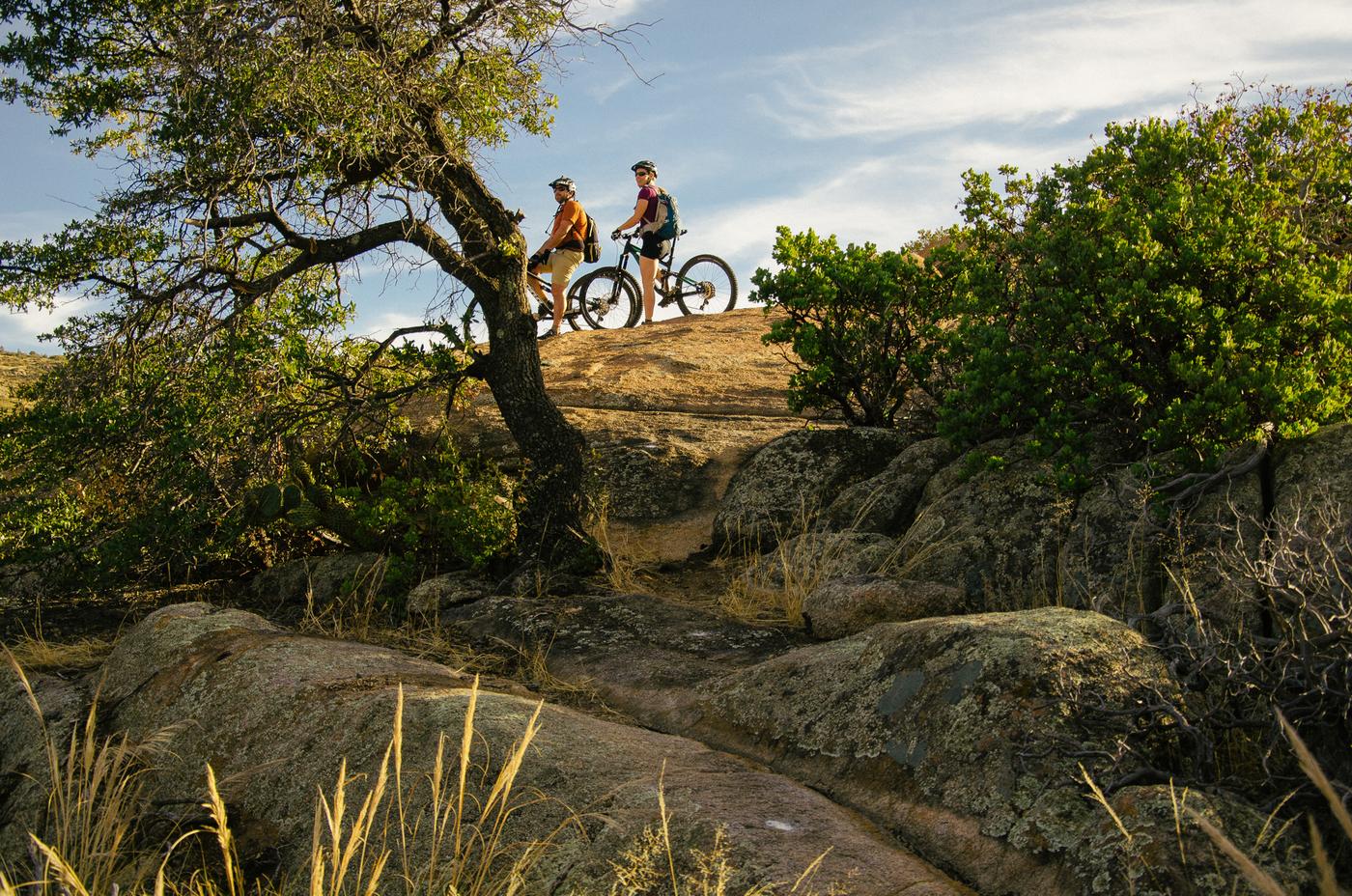 Amber Fields and Joe Trudeau are two people who actively fly in the face of that stereotype. The experiences that mountain biking has given them have inspired a conservation effort that has gathered incredible momentum. The intimate connection to place that riding with it creates is a large part of what drove these two to dedicate huge amounts of time and energy into a grassroots conservation effort: Save the Dells. Not only do they show up to the table, but they bring an umbrella to make sure people will stay and talk for a while.

Joe and Amber met at Northern Arizona University, and both worked for the Ecological Restoration Institute. After that stint, they both headed back to New Hampshire (Joe has actually been a test mule for a few 44 Bikes models) and worked together as private contractors doing ecological forestry. When the ticks finally chased them out of the Northeast, they moved back to Prescott, where Amber was born and raised. Here they have worked with the Forest Service doing forest inventory, as well as wilderness character monitoring for the Arizona Wilderness Coalition. Joe currently works for the Center for Biological Diversity as their Southwest advocate. Of the 14 years, these two have been together, 12 of them have been spent working together in some form of conservation work. Both of them have been avid riders for over 20 years. 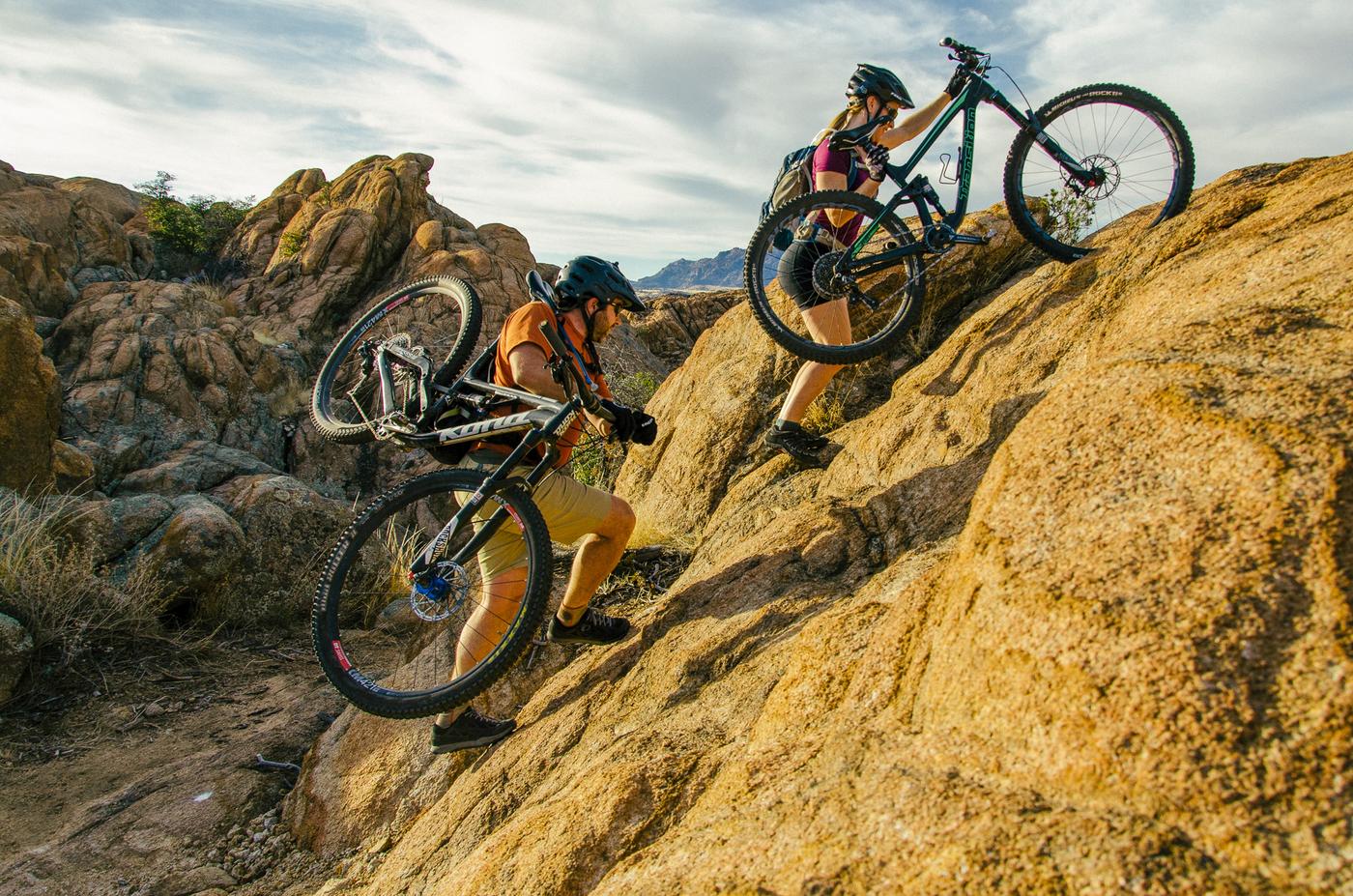 I had the privilege of riding in the Dells with Joe and Amber (read: following some absurd lines and trying not to wreck my camera). I was already impressed by their dedication to conservation efforts, but watching these two Granite veterans pick their way down steep, unforgiving faces was awe inspiring.

The Granite Dells is an alien landscape of Precambrian granite that sits just north of Prescott, Arizona. The Precambrian granite has been dated at roughly 1.4 billion years old, and the Dells are the only place on the planet where this pluton is exposed, after the sedimentary rocks that once buried them have been eroded away. Spheroidal weathering rounds these massive frozen flows into domes and spires. The Dells feel as if you took all of the otherworldly rock formations of Joshua Tree and condensed them into about 2,500 acres, except you can legally ride a bike there. Riding there is somewhat like riding in Moab, but harder, and it hurts a lot more when you fall. It’s the sort of place where you keep your seatpost down, even for going uphill. Riding in the Dells is unlike anywhere I’ve ever ridden, and though it might not be for everybody, the challenges and joy provided by this strikingly beautiful landscape are as undeniably unique as the Dells themselves. 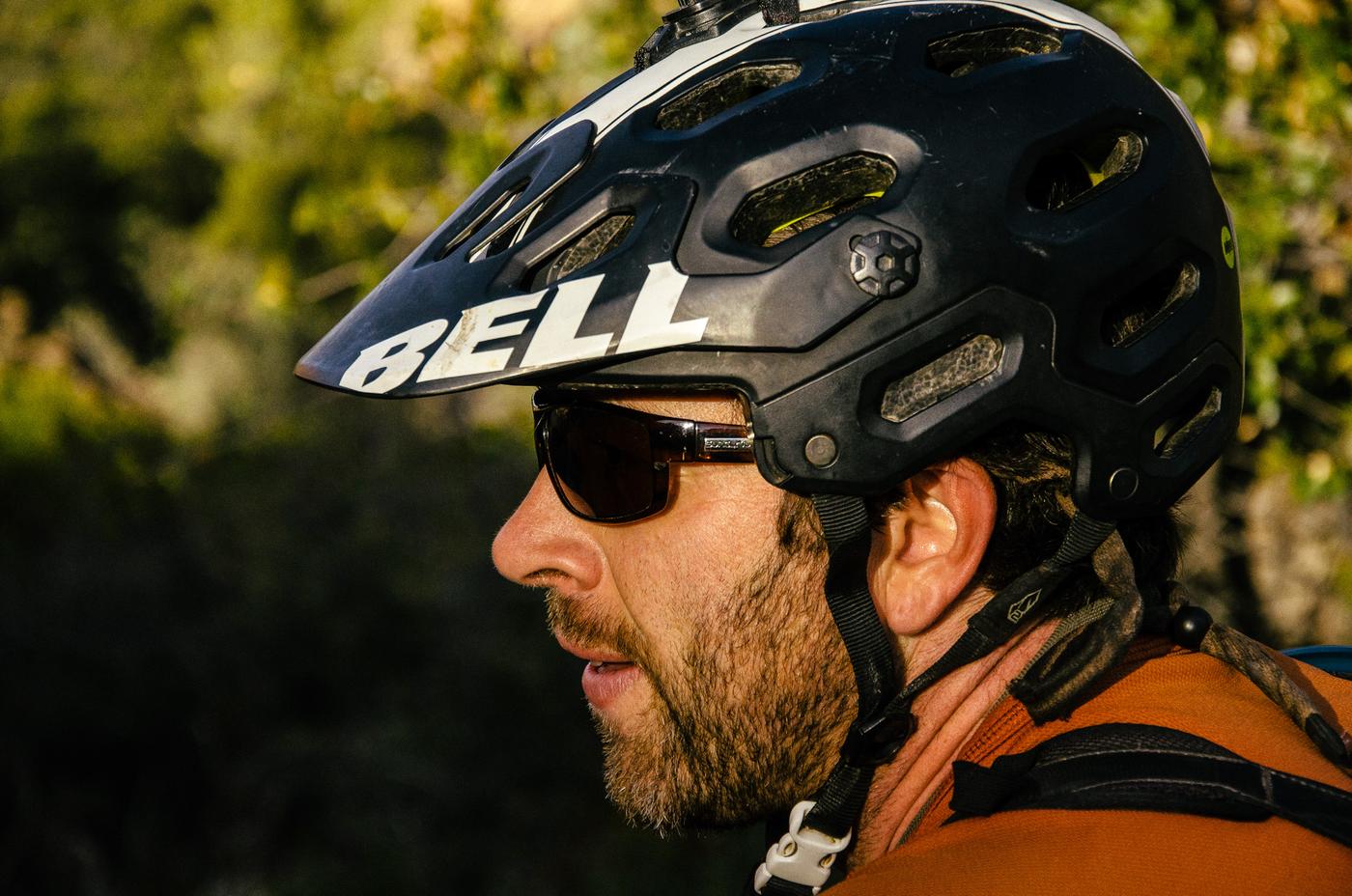 Recently, a housing developer titled Arizona Eco Development (greenwashing much?) has proposed a new housing development, some of which is proposed on 500 acres in the heart of the Dells. With houses come roads, fences, traffic and noise. We rode just south of the area in question, and though we weren’t far from town, I rarely heard more than tires, laughs, wind, and birds. Development in this area would not only impact the quiet harshness of this landscape, but impact wildlife, water, the local community, and all groups of recreators.

When word of this got out, Amber and Joe took on a workload akin to second full-time jobs to form the conservation organization, Save the Dells. Save the Dells is focused on preventing development from encroaching upon the incredible landscape of the Dells. Annexation into the City of Prescott (in other words, joining the City) comes with responsibilities such as the requirement that 25% of the development be dedicated to open space, which could protect the more than the 500 acres in the Dells that AED owns. Bargaining the benefits of annexation, such as water rights, for protecting the 500 acres in question as public open space is a solution being proposed. Unfortunately, the 500 acres in question is some of the most valuable lands in Northern Arizona due to the views and proximity to recreation. Part of the struggle is the City of Prescott itself. It’s easy to see the benefits of high-end housing in a scenic location: more people with more money to spend. Save the Dells advocates for the City of Prescott to negotiate an annexation where the taxpayer-funded benefits of annexation, as well as the granting of water rights, are traded in exchange for public open space in the Dells while allowing higher density housing somewhere outside of the Dells. 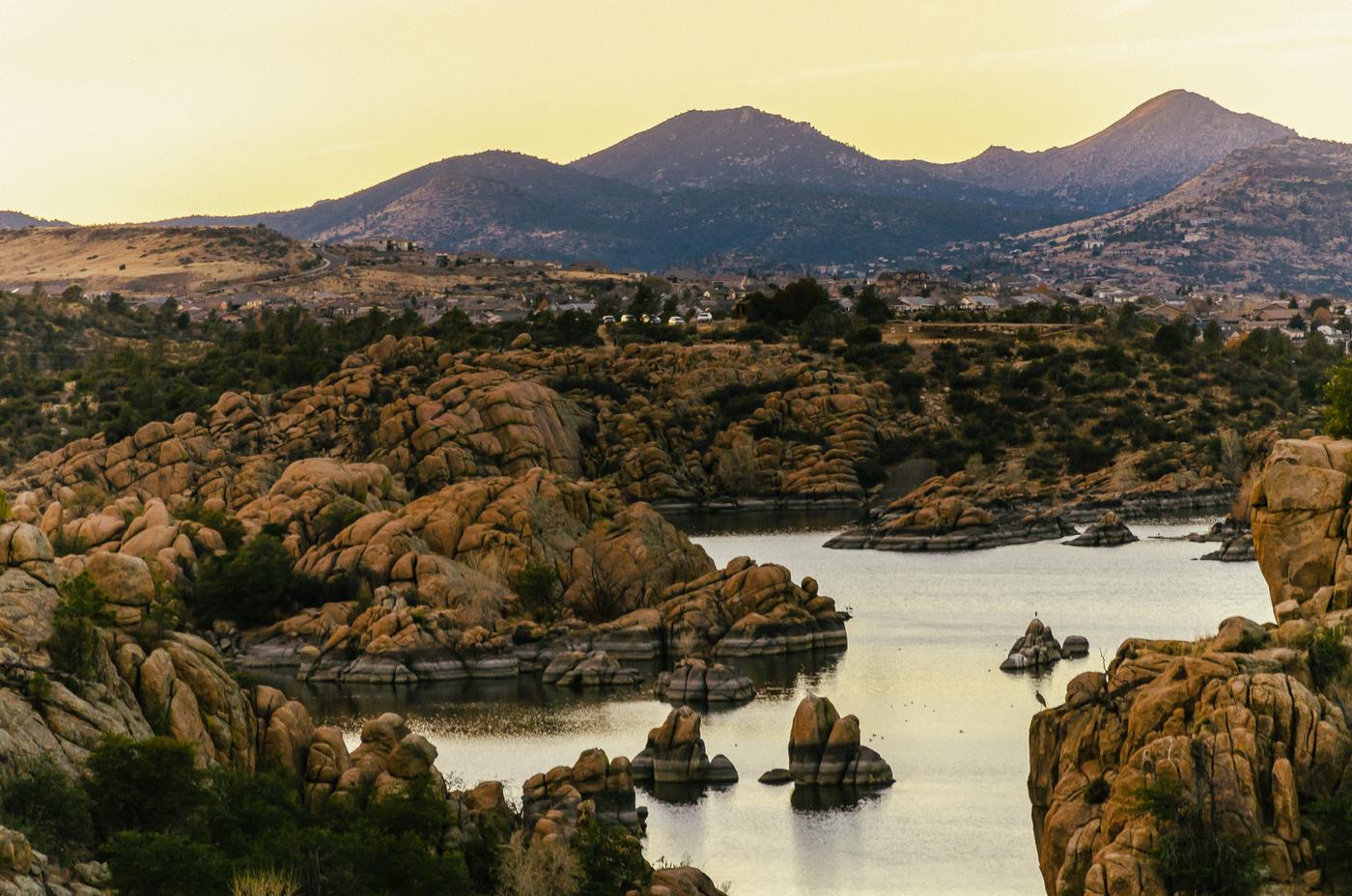 At this point, you may be asking yourself how you can help? Though this is a seemingly local issue, the implications of the dirt cycling community supporting conservation issues are much bigger than Prescott. Remember that identity crisis we talked about? Let’s change that. You can help this cause by donating to Save the Dells of course. You can also make a statement to the people on the Prescott City Council who are currently weighing the economic benefits of recreation vs. development. Writing a letter or email to the Prescott City Council that states your desire to explore a landscape that literally only exists in Prescott is huge. Tourism is one of the largest economic drivers in the West, and Arizona is no exception. Considering a long weekend to Moab from LA?  Maybe consider making your drive a whole lot shorter and riding some of the most unique lines on the continent, and help change the way the world sees our sport in the process.