I’m pleased to finally be able to show the latest model to join the Quirk Cycles line-up, here is the SUPERCHUB. This one has been in development for a while and when you look closely you will see all the little details that have gone into making this. Keep on reading and I’ll show you what makes this XC Race bike so special. Straight off the bat one of the first things most will notice is the lines of this frame, I mean, look at that rear-end! It’ll come as no surprise that this frame is making use of 3D additive manufacturing to develop a set of unique dropouts and seat cluster. These pieces have been printed in 15-5 stainless steel and apart from looking aesthetically stunning, offer many structural benefits. Not only do they weigh less than standard brazed plate dropouts, but they make a stronger part that distributes the stresses of the frame more effectively due to the continuous skin between tubes and printed parts. The system integrates the seat clamp inside the top tube for super clean lines into the stays, and SRAM’s UDH hanger is used for a readily and easily replaceable part. 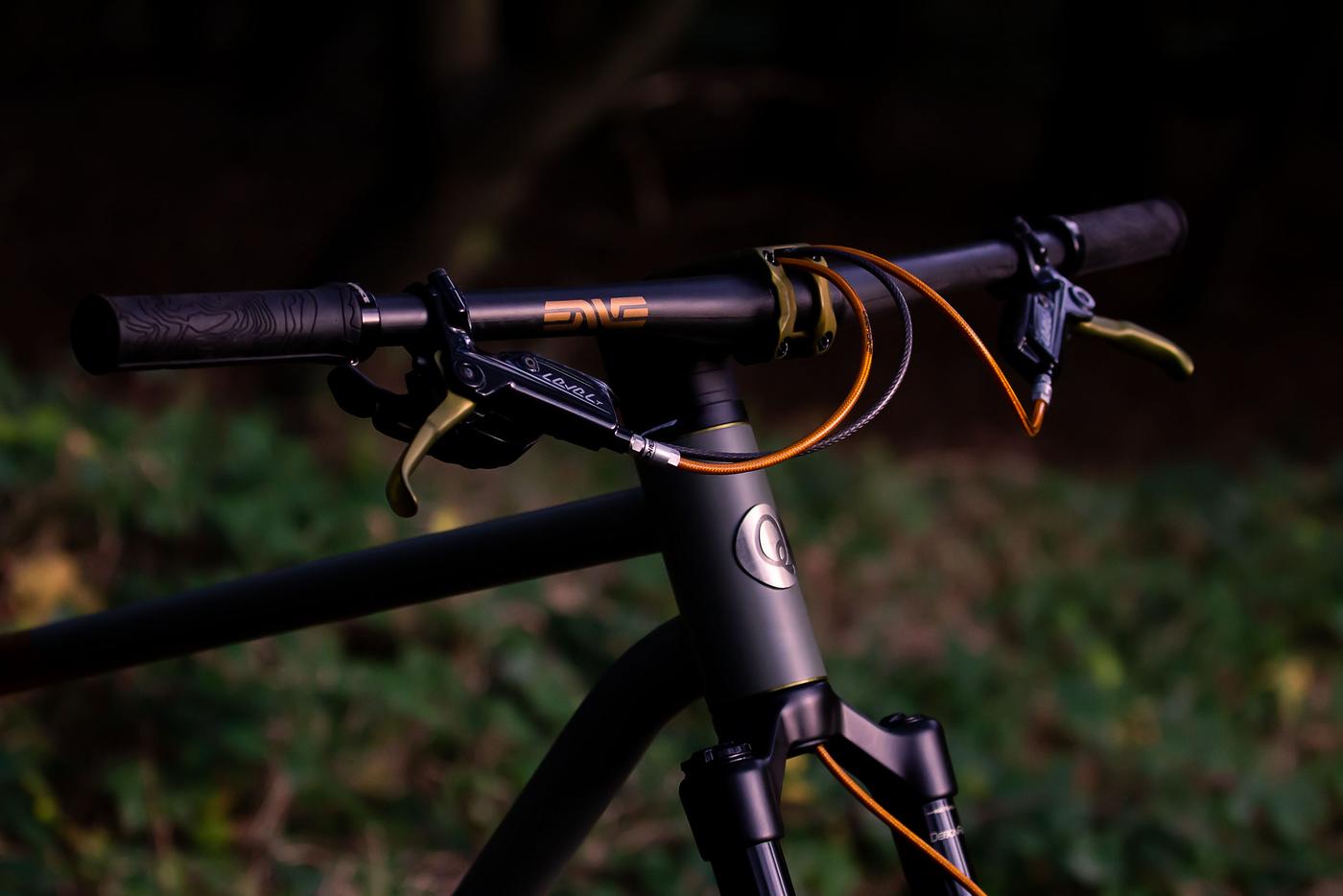 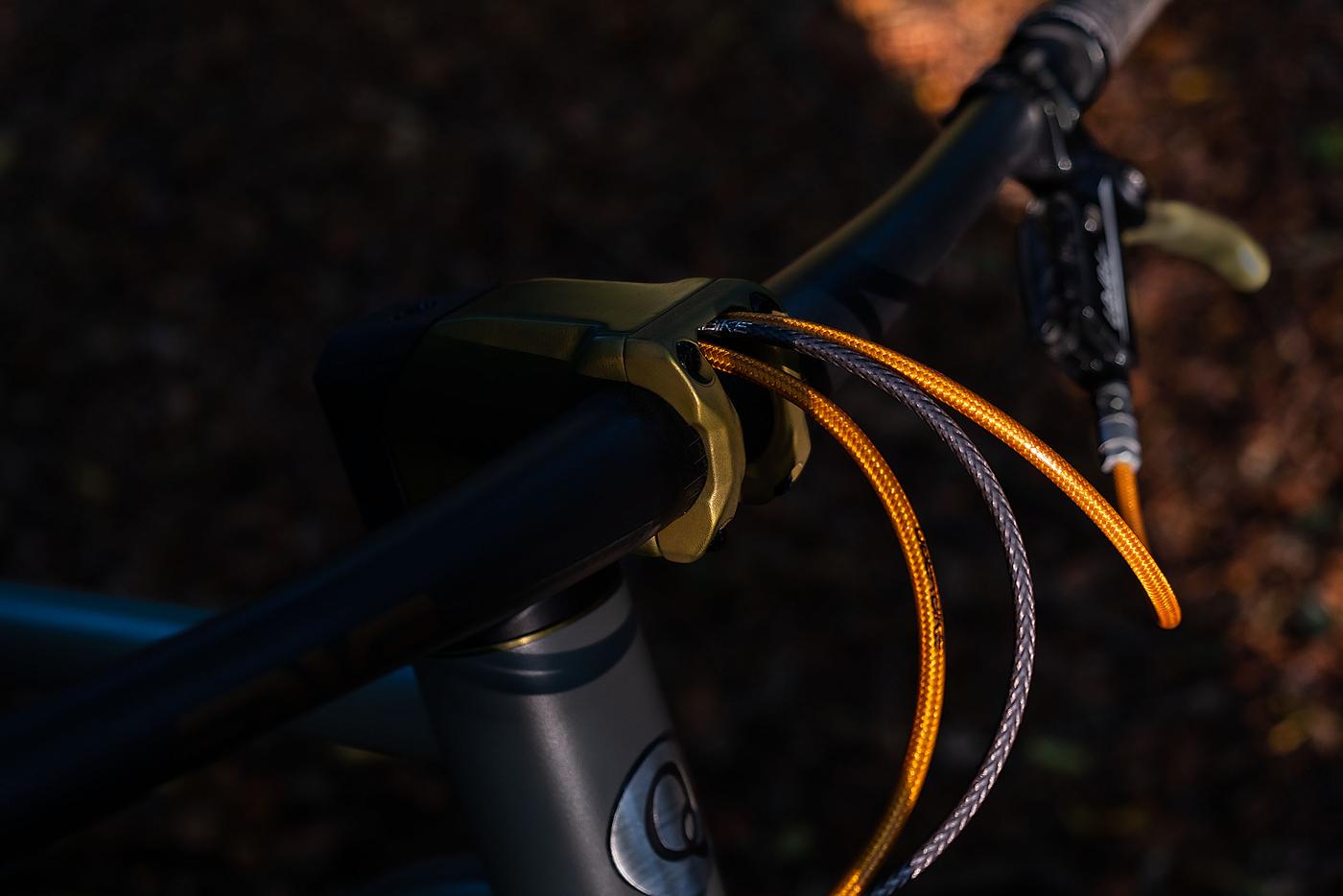 The second feature that is an instant standout is the fully integrated cable routing. I know this is one of those topics that splits opinion, especially in MTB circles, but there are some key reasons why I went this way. One aspect of steel frames that I’ve never felt satisfied with are head tube and headset standards, the predicament being that the clean lines of internal bearings meant having large overly heavy head tubes. With integrated routing, I could design shorter, lighter head tubes with a higher strength of internal bearings. Done right, I could even save some weight. The headtube is a straight custom machined 54mm ID that takes a 1.5” bearing top and bottom. Usually running 20mm of spacers would look out of place on a steel bike but this system positively adds to the profile. The advantage of this is that the heavy steel head tube is reduced in length and lighter ABS materials take its place. Even this larger frame looks proportional and well laid out. The system is great for reduced cable snag on the outside of the frame, but the advantage of the ease of cleaning shouldn’t be overlooked either, especially when you live in rainy England. It was important to me that this bike would be light and fully built in its current form weighs in at 10.3kg, good for a steel frame with a mix of high and low-end components. The SUPERCHUB frame itself weighs in at just 2kg and with the refinement of the 3D parts, it’s expected this will come down another 50-100g. When it came to the parts I really wanted to have something that was stand out differently. Custom builders are where you expect to see the more unusual, less-known component manufacturers on display but even this means seeing the same ‘recipes’ used again and again, I was keen to try something different, and make something unique to Quirk. That’s when I decided to do in-house anodising. From the cranks to the valve stems I tried to anodize any component that was aluminum. The hardest part was the derailleur, which ended up being made from the body and knuckle of a Force CX derailleur as the alloys used in the Eagle GX can’t be anodized. Dues to the differences in the alloy grades the shades and consistency of the green dye changed from part to part, but I wasn’t after consistency, I was after expression and experimentation. People will give me stick for using SRAM Level T brakes but there’s something wonderful about customizing cheap parts with in-house anodizing and Hopp Carbon reservoir caps. One for the boy-racers. Most of my riding would fall into the XC category with the occasional trail thrown in so I wanted to design a frame that could still tackle long-distance well, but with elements that would make it handle technical trails with a bit more finesse. The 68° head tube is suitably slack by today’s XC standards and when paired with a 44m fork offset makes the handling lively and predictable. I’m a big fan of shorter rakes on off-road bikes as the reduced wheel flop makes the steering arc progressive and confidence-inspiring. With the longer trail means the bike will roll well on the flat making those longer rides less fatiguing. The chainstays sit slightly longer than most at 433mm which means this bike climbs like a champ, but to keep the ride feeling lively I’ve kept the BB high at 60mm, raising the rider’s center of gravity and preventing the frame from becoming overly planted. 2.4” tires shoe this sled and fork travel is at a short but cushy 100mm for perfect float and traction.

Here’s a rundown of the parts: