As someone who has everything he needs in a touring bike, I’ll admit that I was a little apprehensive to spend a weekend on the new Specialized Edition AWOL Transcontinental touring bike (due out in late February). Honestly, it just didn’t seem like my kind of rig. I like cantis, the feel of a traditional drivetrain and the look of a 110mm stem.

Now, from what I had seen of the AWOL, it was the exact opposite and that bothered me. A lot. First of which was the riding position. The bars were level, or even higher than the saddle, due to the massive head tube and positive rise, 80mm stem. It looked like a MTB, not a touring or rando bike with its compact geometry.

Next up, a Gates Carbon Belt Drive and an 8 speed Alfine hub – there’s no way that gear range would be wide enough! The bike relied on TRP’s Hylex single speed hydraulic disc brakes. Up until this point, every hydro disc system I’ve ridden on drop bars has felt horrible, especially when compared to my XT and XTR setups on my mountain bikes. Even my SLX on the fatbike felt better…

My opinions aside, the bike still intrigued me and one thing I’ve been trying to work on is separating my somewhat arrogant opinions and being more open minded about product reviews.

When Erik told me that he really wanted to do a ride that was mostly dirt on the AWOL, I figured what the hell? Up to this point, the AWOL has been showed on road, not off-road. Besides, what’s the worst that could happen? Maybe some of my opinions would change and I’d have to pull my foot from mouth.

That’s exactly what happened. Check out more below!

First up, let’s look at the insignia on the bike. This is the Transcontinental badge, representing the journey Recep and Erik made from London to Istanbul. 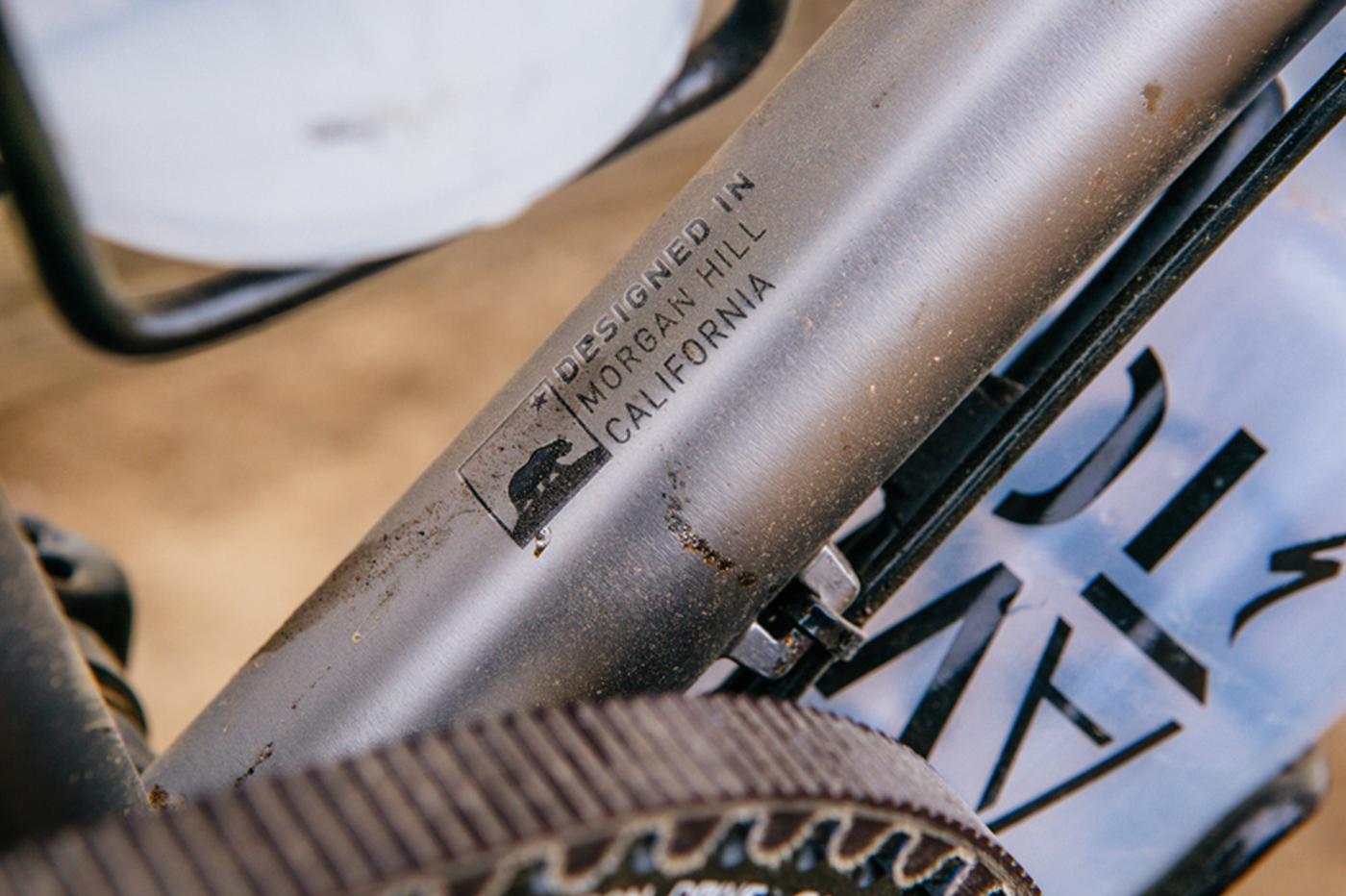 These bikes are limited to 100 worldwide and were actually designed in Zurich. 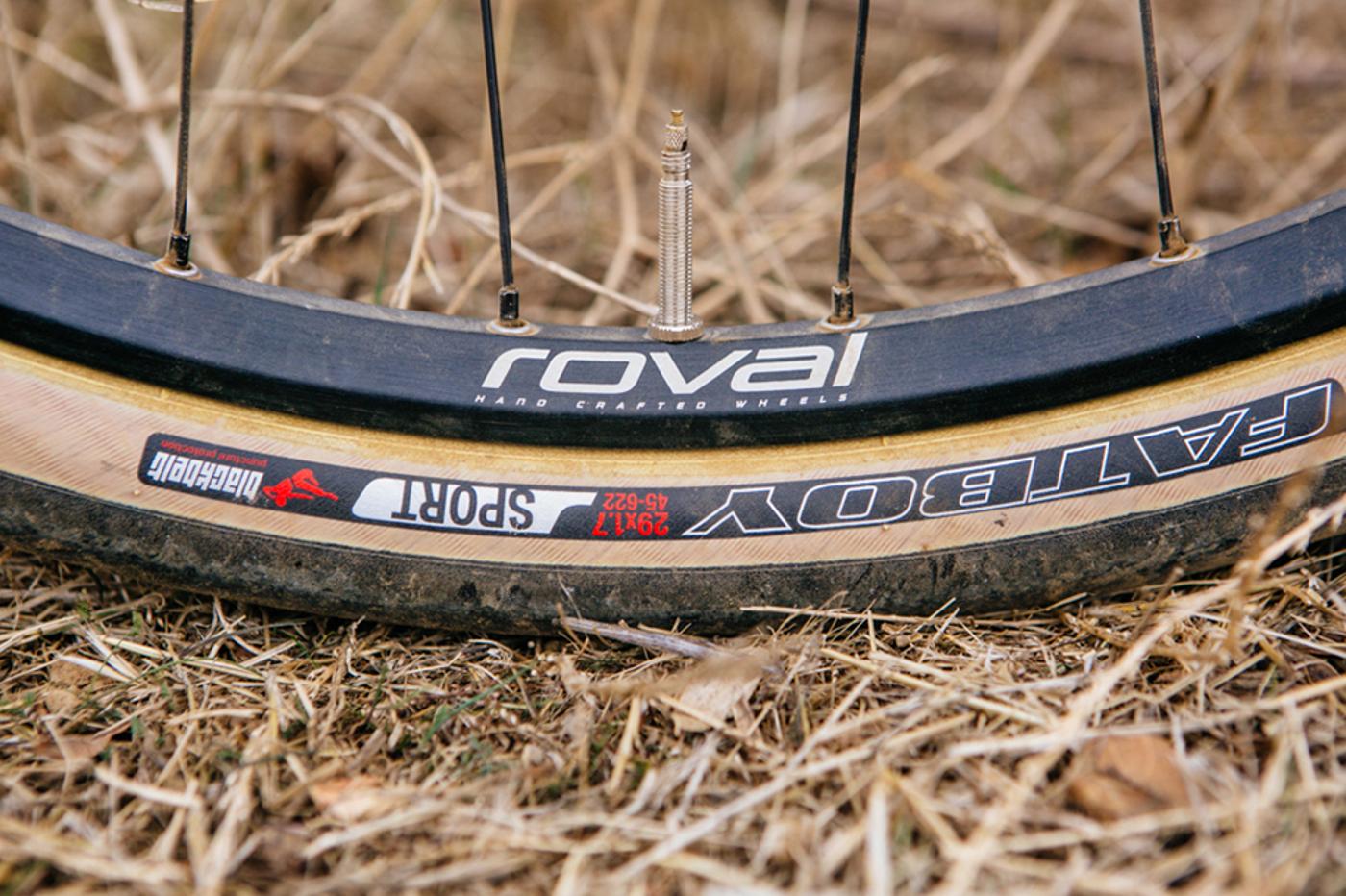 The disc-specific Roval rims and Fatboy 45c tires provide more than enough confidence at the contact point. Side note: those tires have been out for over a year and I had no idea. I’ll be picking up a few pairs of them when I get home! 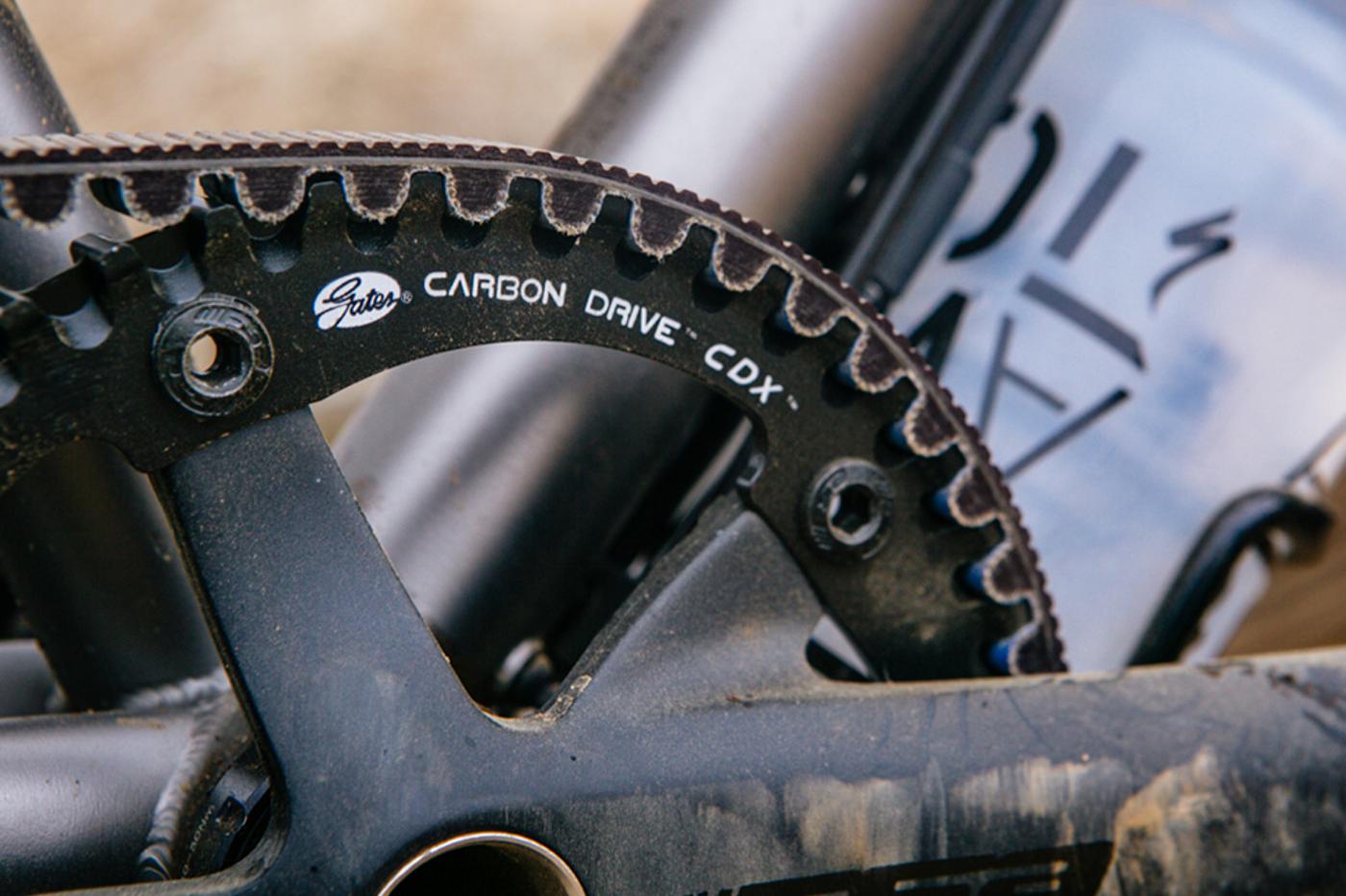 My main issue with this bike, from the onset was the carbon belt drive. I just didn’t see the point. For me, this technology is as alien as a ray gun. When it came to dialing it in, I was unable to and had to ask Recep for assistance. That said, after we adjusted it, I had no issues and immediately forgot that I was riding a belt drive bike. 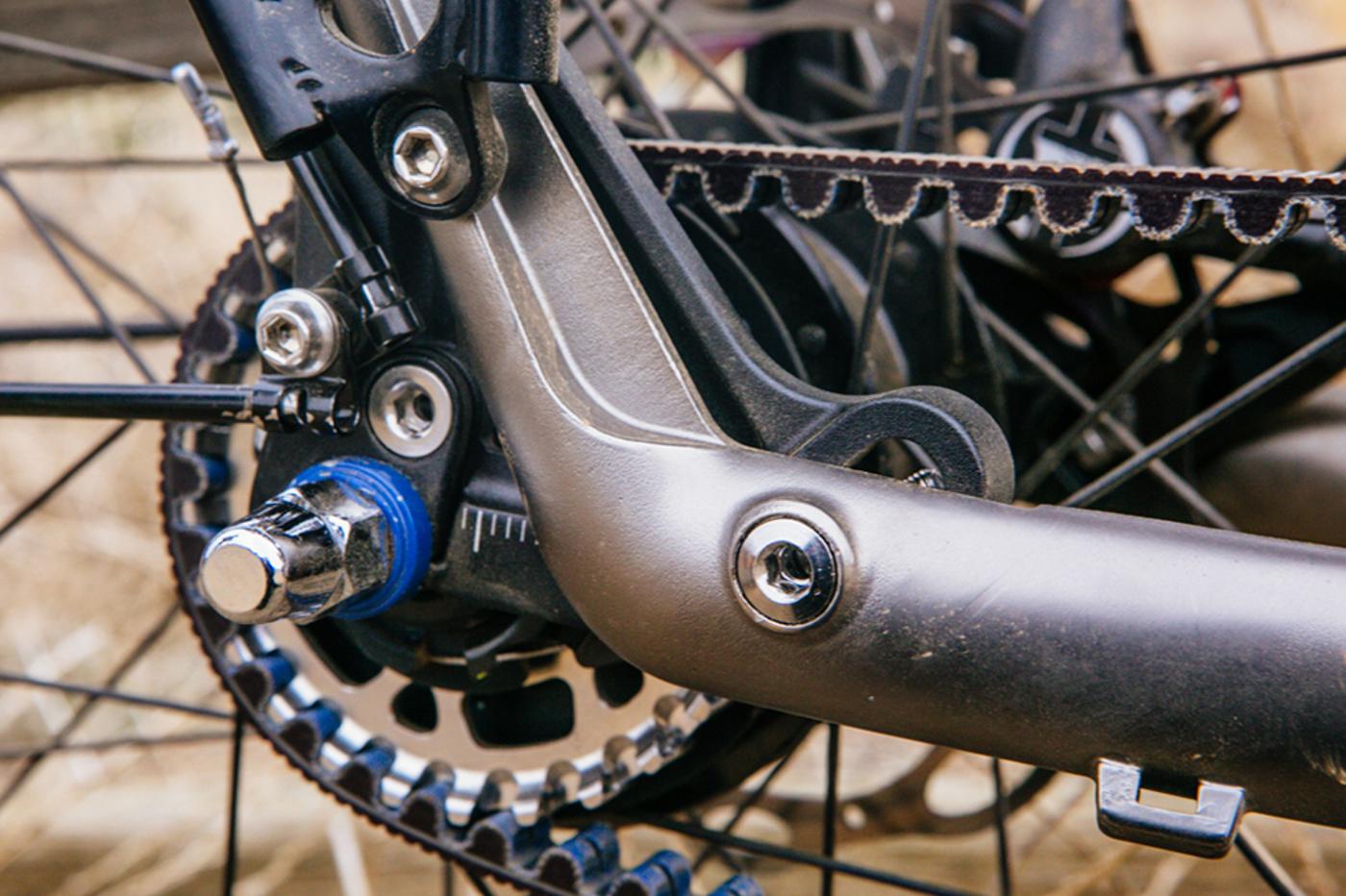 The rocker dropouts and overall tunability of the system allow you to change your gear range quite easily. Still, at only 8 options, I found myself having to really push when we hit anything over 10% on a loaded bike. 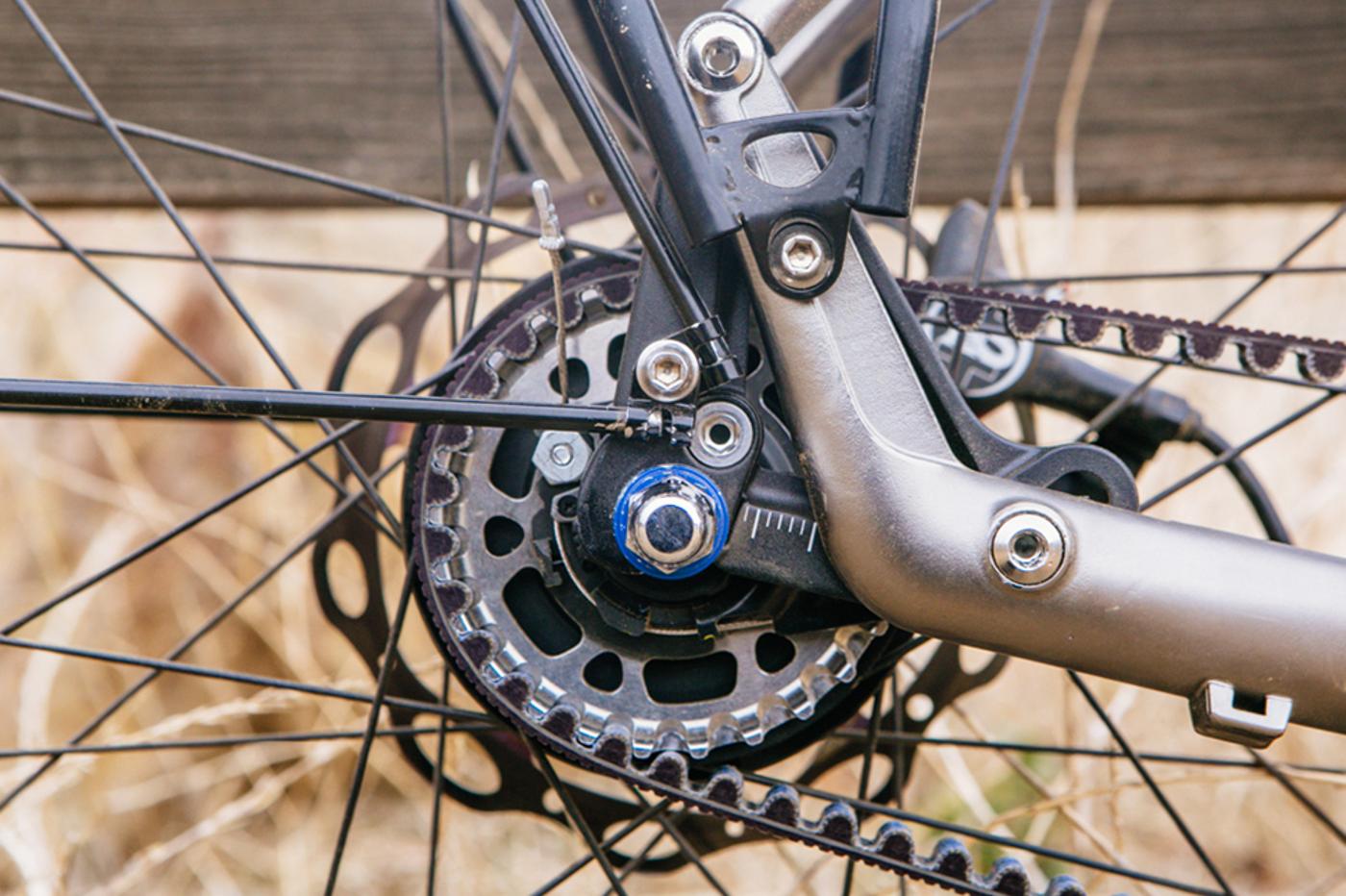 I could have easily used a few extra gear inches. Especially on the fire road climbs. 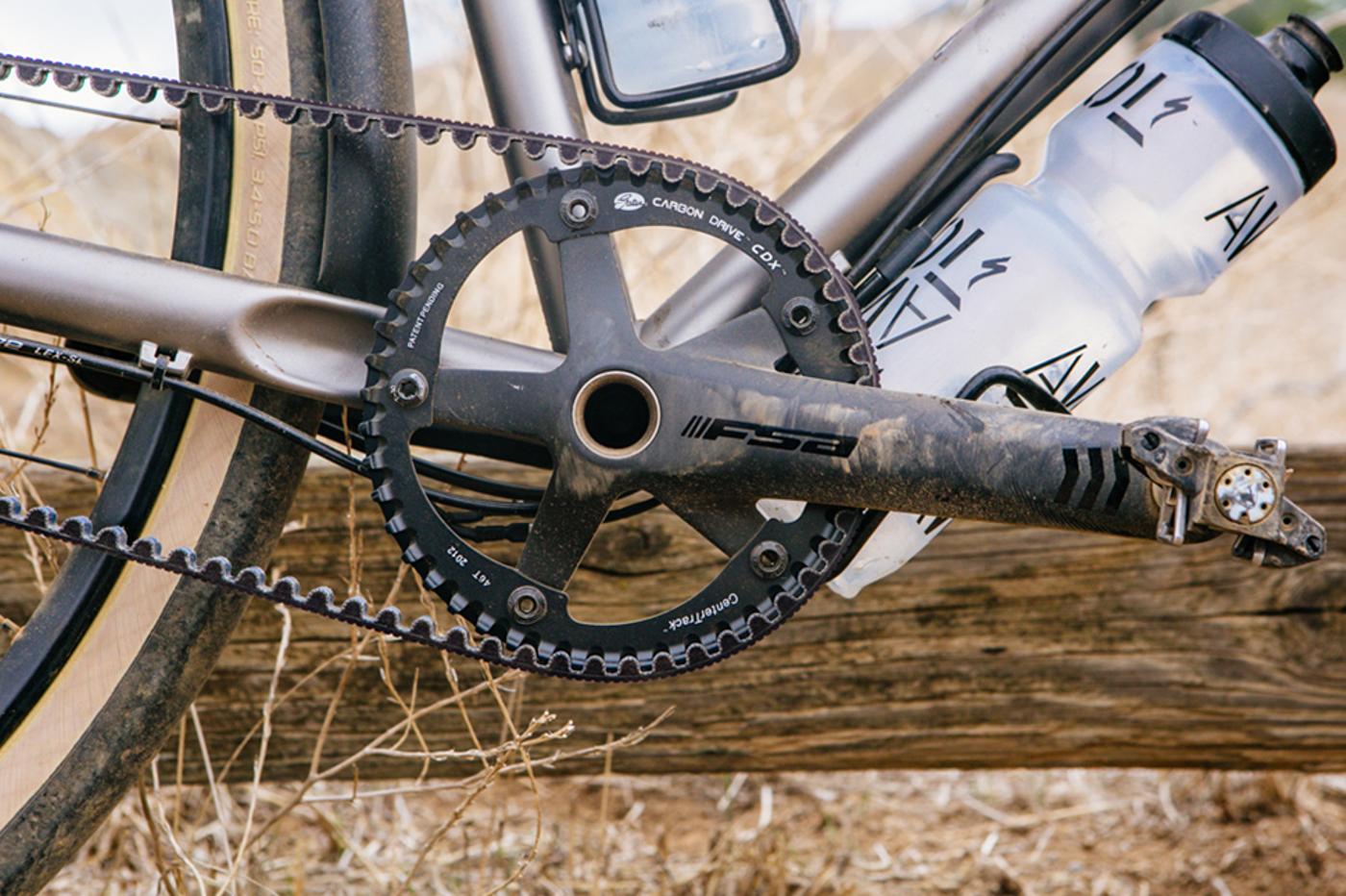 But for an off-the-shelf item, the gear range was more than capable of tackling 90% of the riding we were doing. Personally, if this were my bike, I would spring for a wider range on the hub. Which is easily doable. 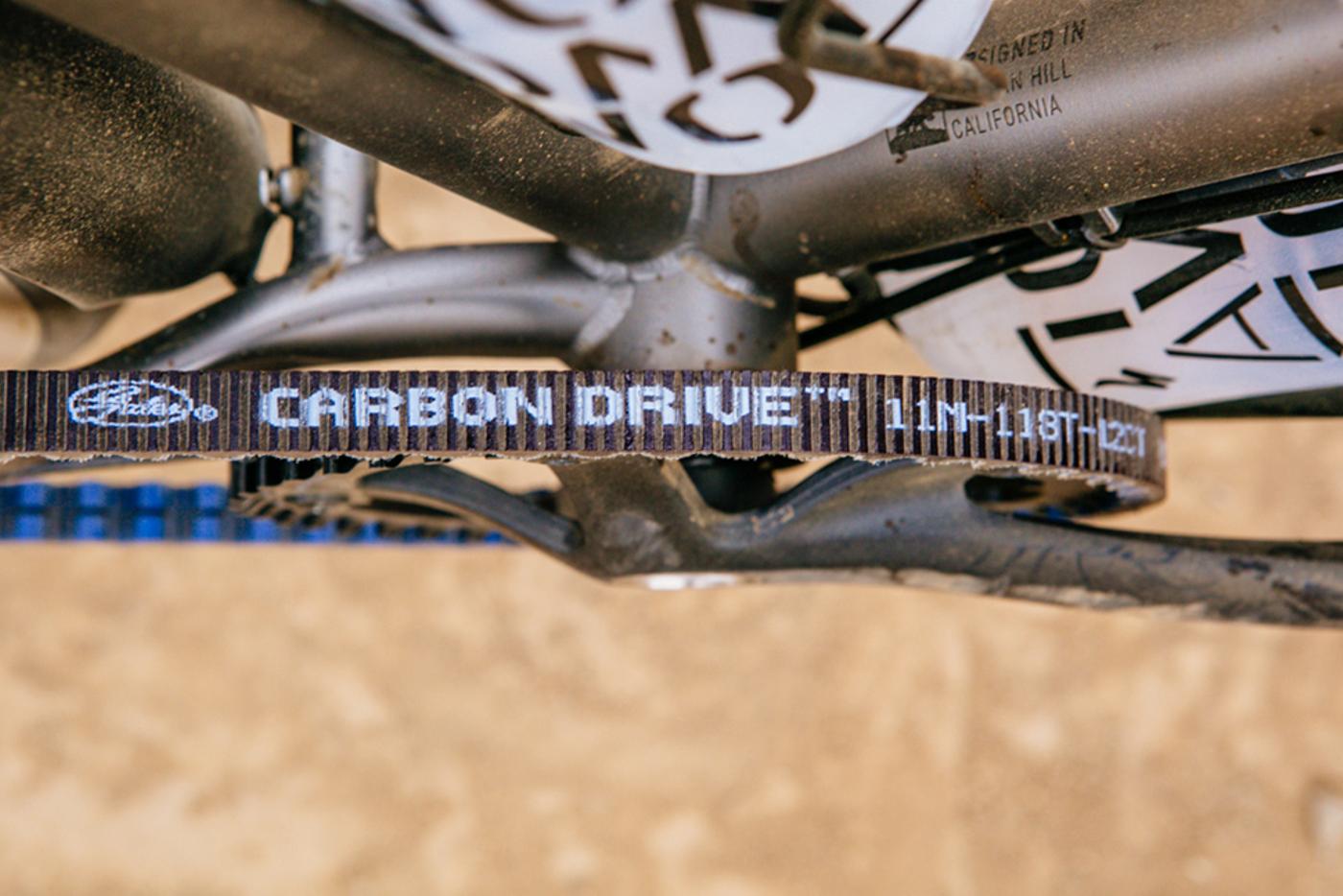 Did I mention that Gates is made in the USA? 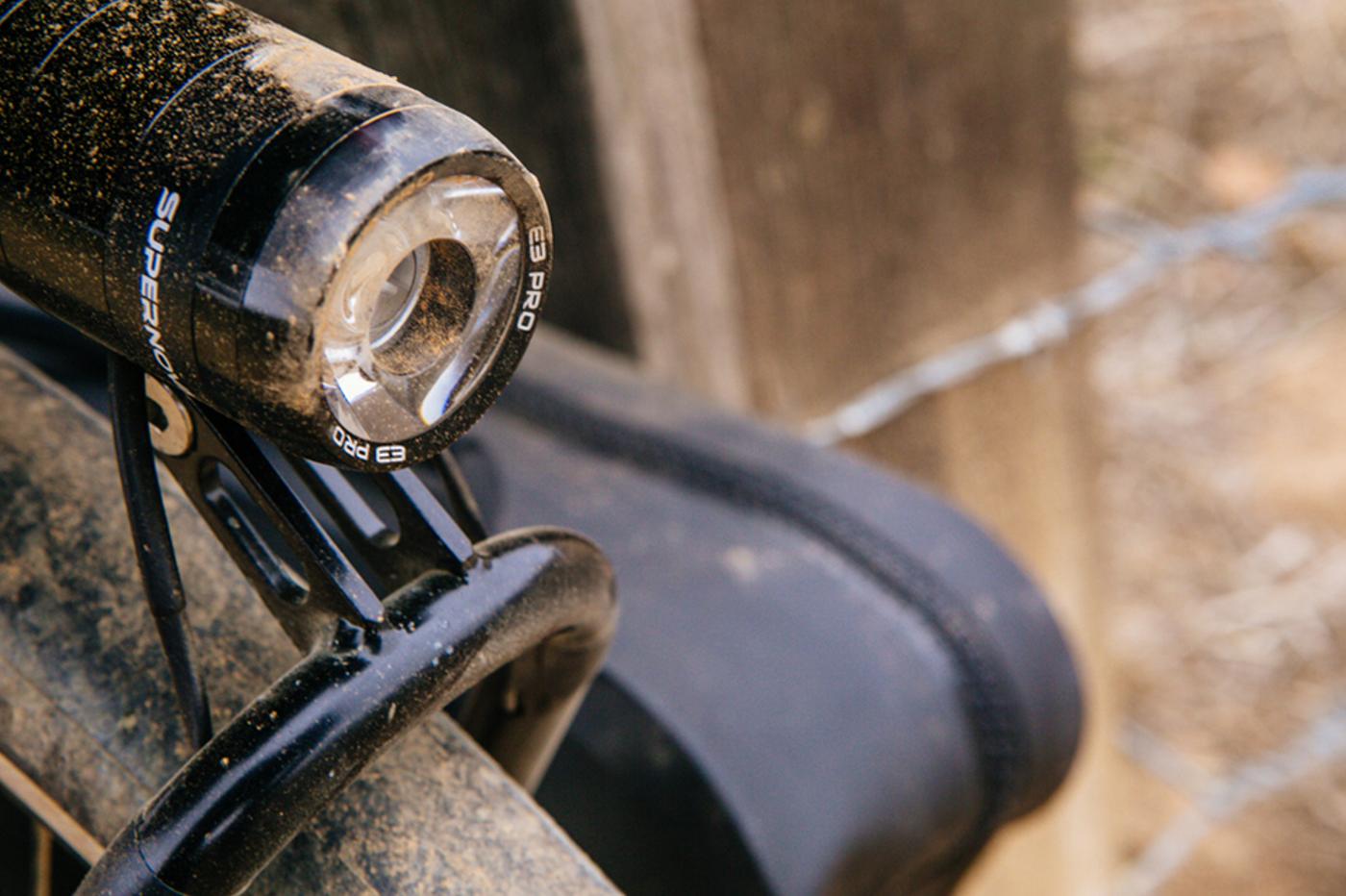 My favorite detail on the bike is the stock Supernova system. 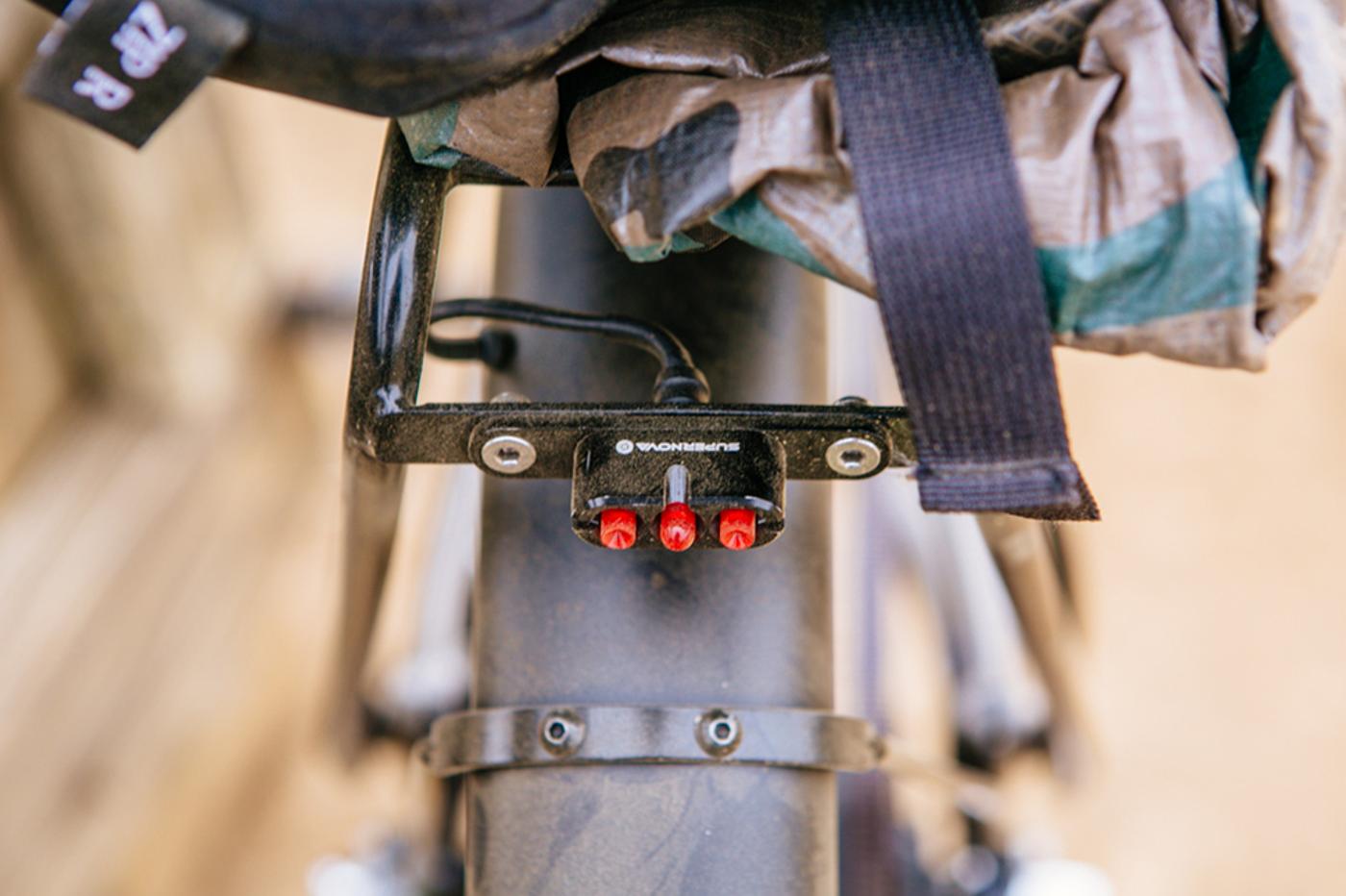 Front and rear lights are powered by the Supernova hub. I run SON on my bike and found the Supernova to be the ONLY other generator hub to come close to SON’s performance. 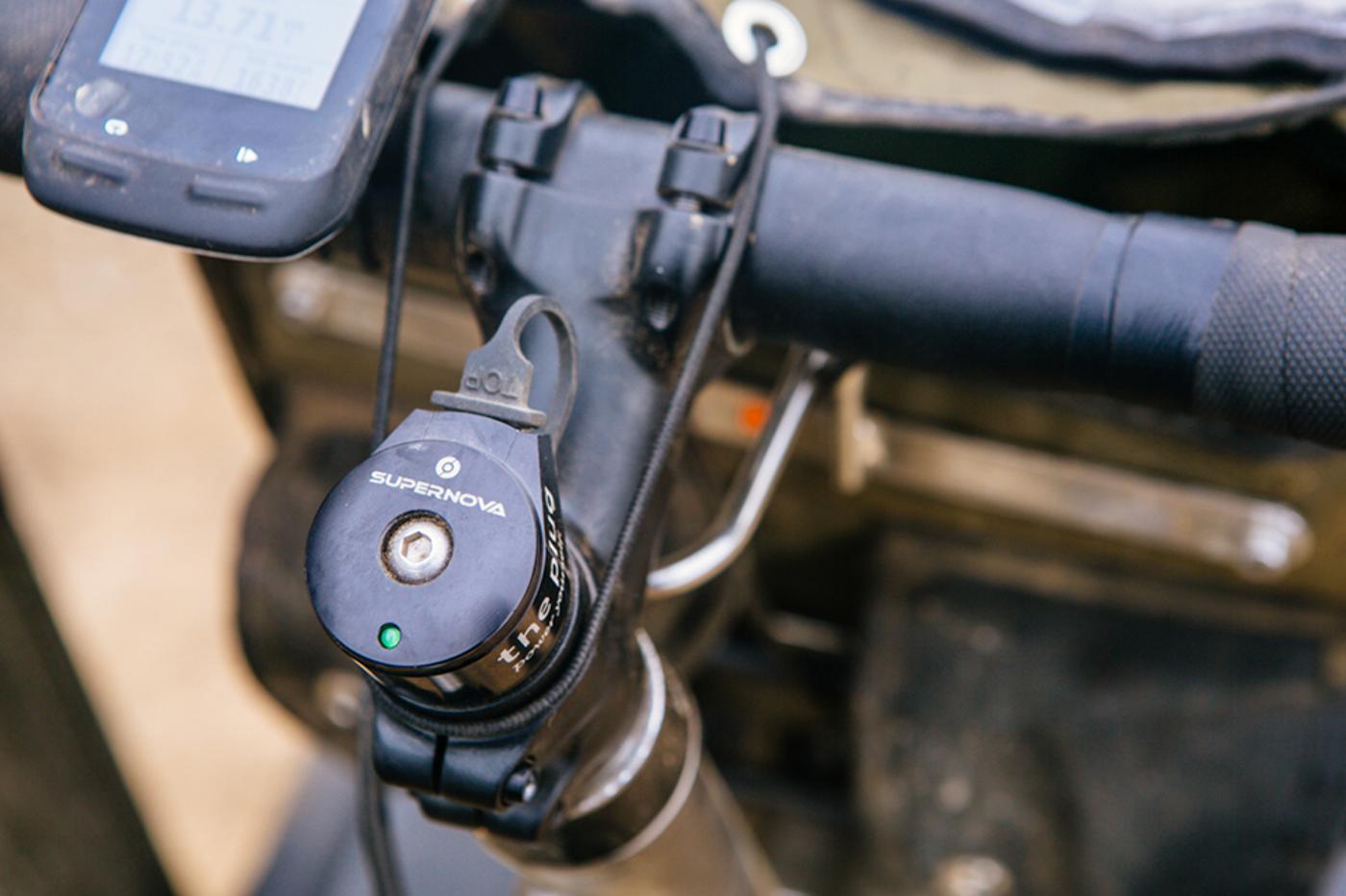 Here’s where it gets rad. The Plug is spec’d on the AWOL limited bike. Charge your phone, GPS, whatever with the USB interface. One catch: if you’re charging your phone, you can’t run your lamps… So do so during the day. 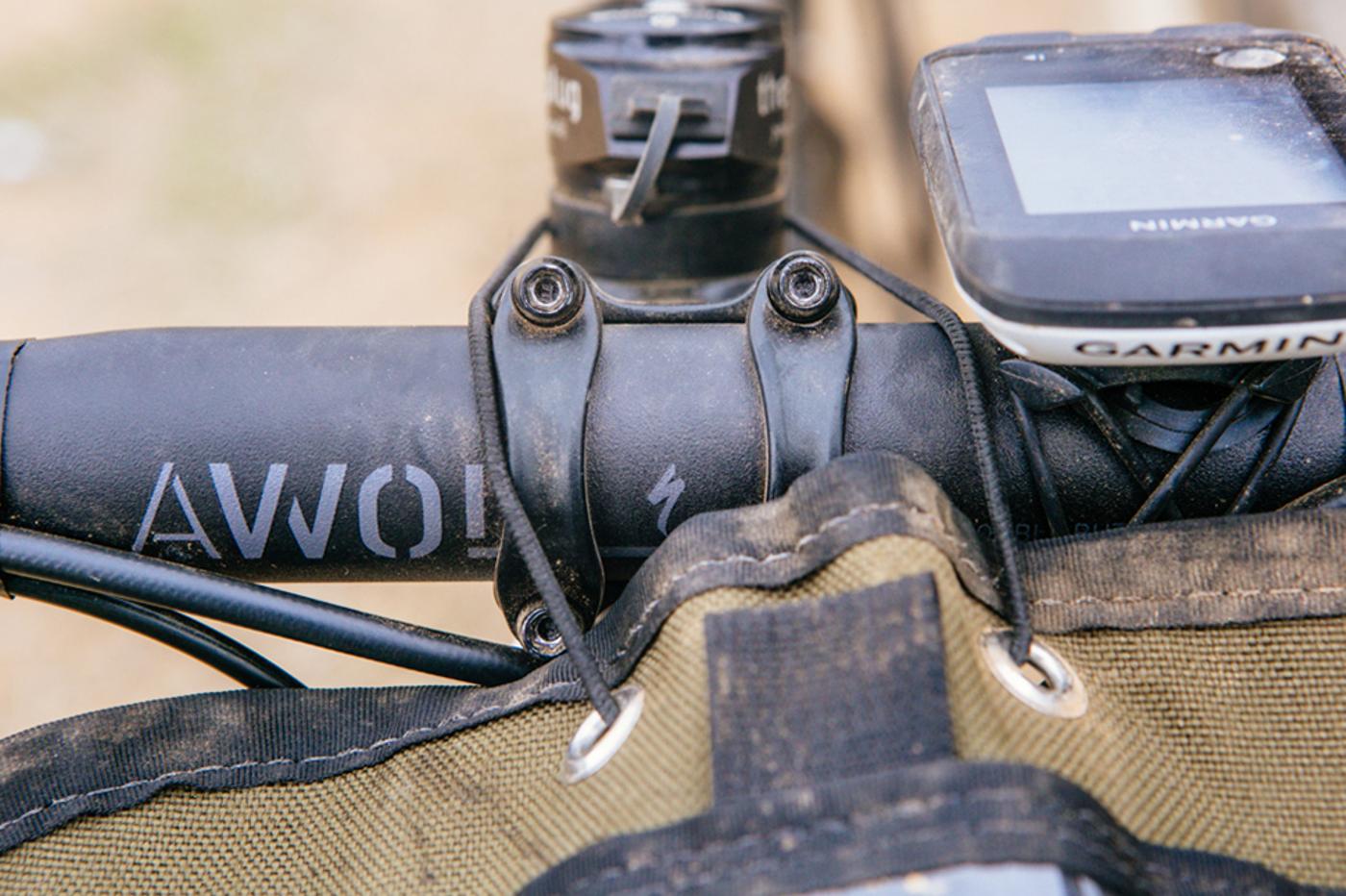 The bars and stem of this bike are AWOL-specific. Much like the Salsa Cowbell, they’ve got a slight flair and are a perfect width for touring both on and off-road. 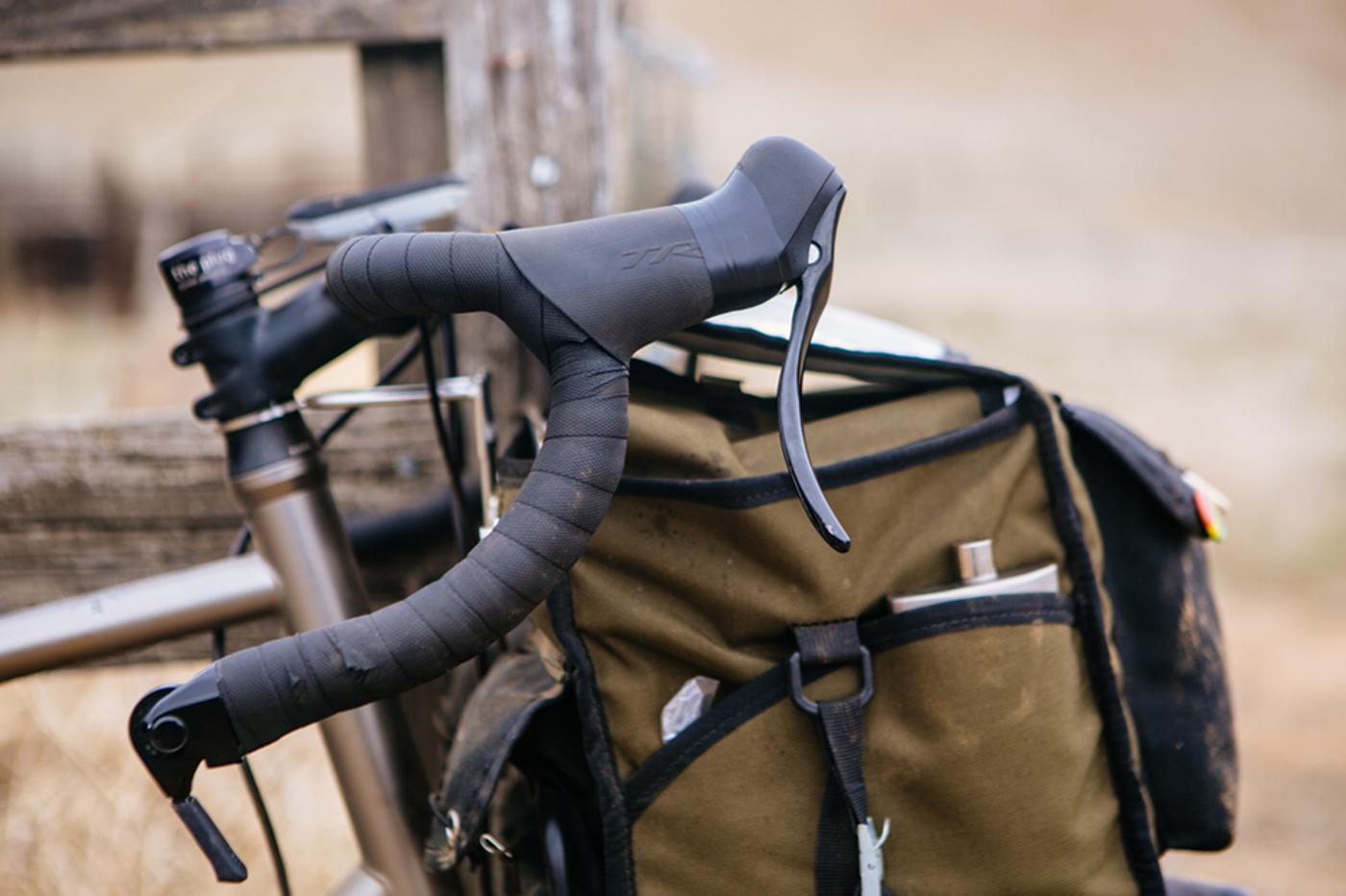 The AWOL bike has a top tube that’s a few centimeters longer than a traditionally-sized bike. This allows the wheelbase to be wider, reduces toe overlap to non-existant with a 45c tire, fenders and actually provides for a very stable ride. Much like a modern MTB, shorter stems help with mid-low trail riding. The best way I can describe the posture, or fit of the rider on this bike is that you’re riding “in” the bike, not “on” the bike. 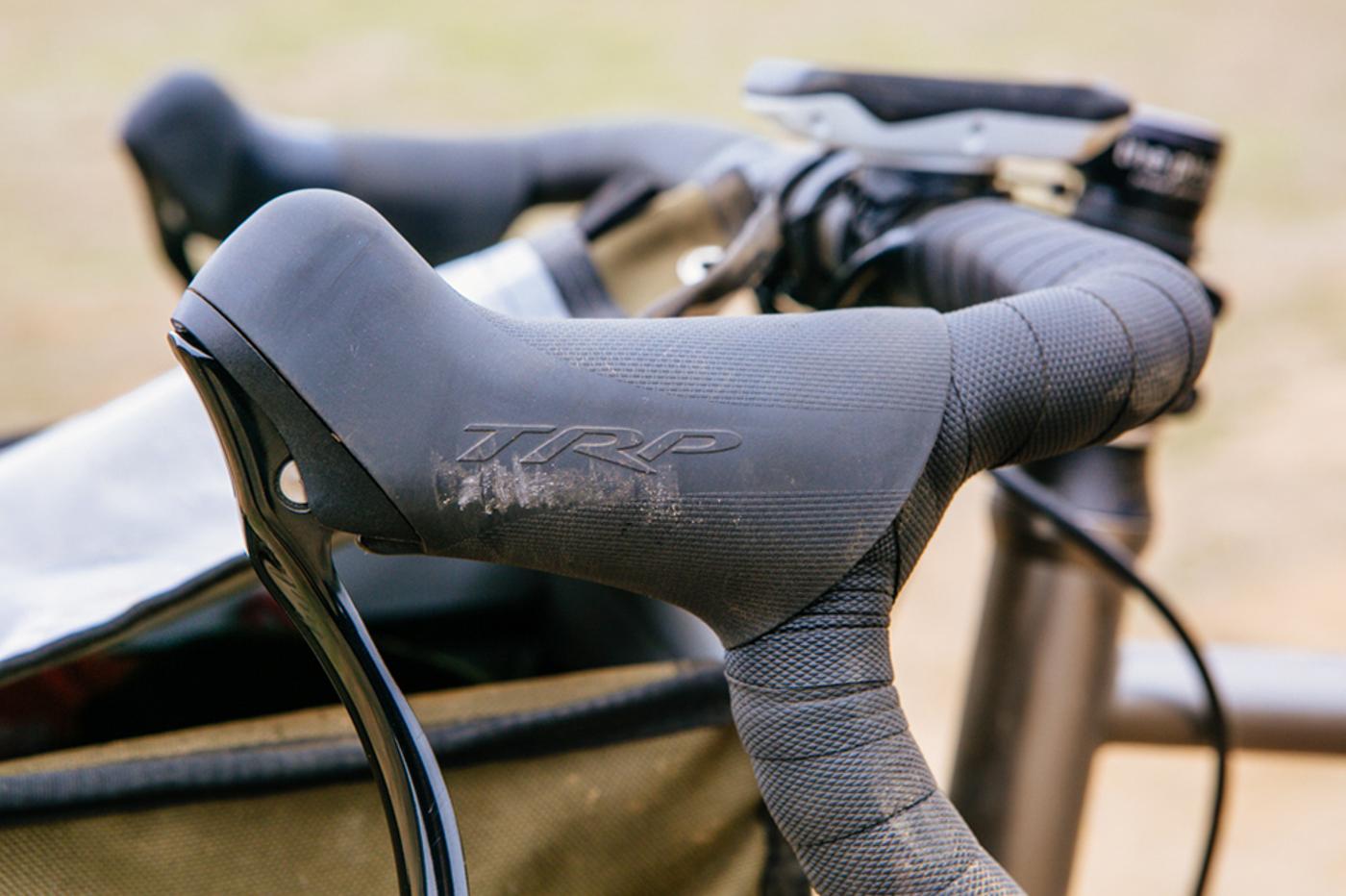 Here’s where the bike ruffled my feathers… My main issue with hydraulic disc brakes on a bike like this come down to a few key points. The first of which is reliability. If you have an issue with the line or the fluid, and you’re away from a shop, you’re going to be pretty bummed. 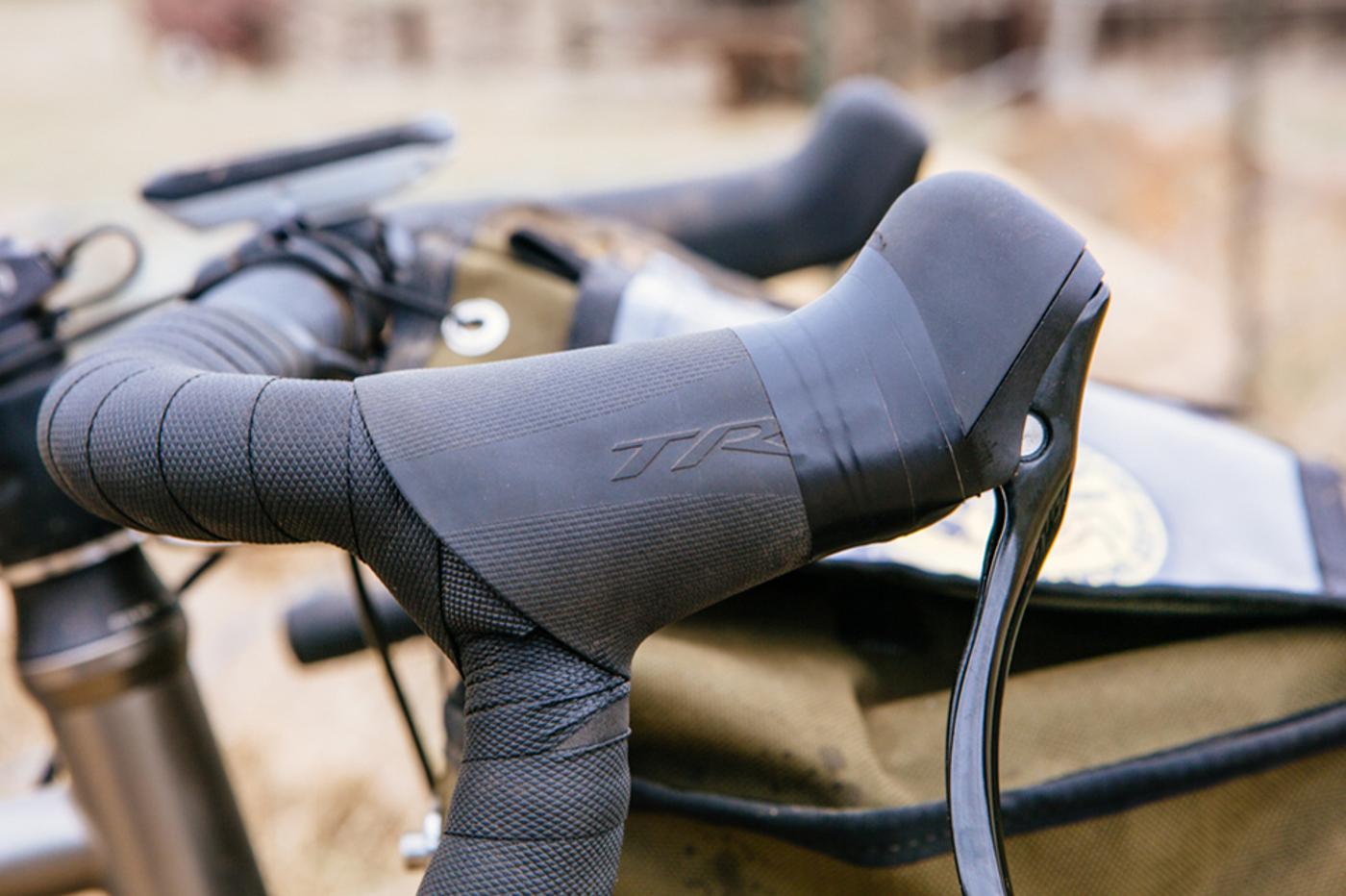 Secondly, the contact patch. Disc brakes are incredibly efficient at delivering braking power, but if you don’t have a large enough contact patch to ‘grip’ the ground, you’re going to loose control, especially if the actuation is too touchy. Luckily, the AWOL has a 45c Fatboy tire, so it’s better than a 33c cross tire, but still, I found myself with less control than I have with a canti, even fully loaded.

Now, my experience with the TRP Hydro SS Hylex brakes has been better than with SRAM or even Shimano. The Dura Ace brakes I rode had too much actuation. They were off or on, no in-between and Red’s brakes felt more akin to Avid’s MTB brakes. Which aren’t that great.

Something about the TRPs made the ride (loaded or unloaded) a lot more familiar.

Has this changed my perspective on hydro systems for drop bars? Yes. But only slightly. 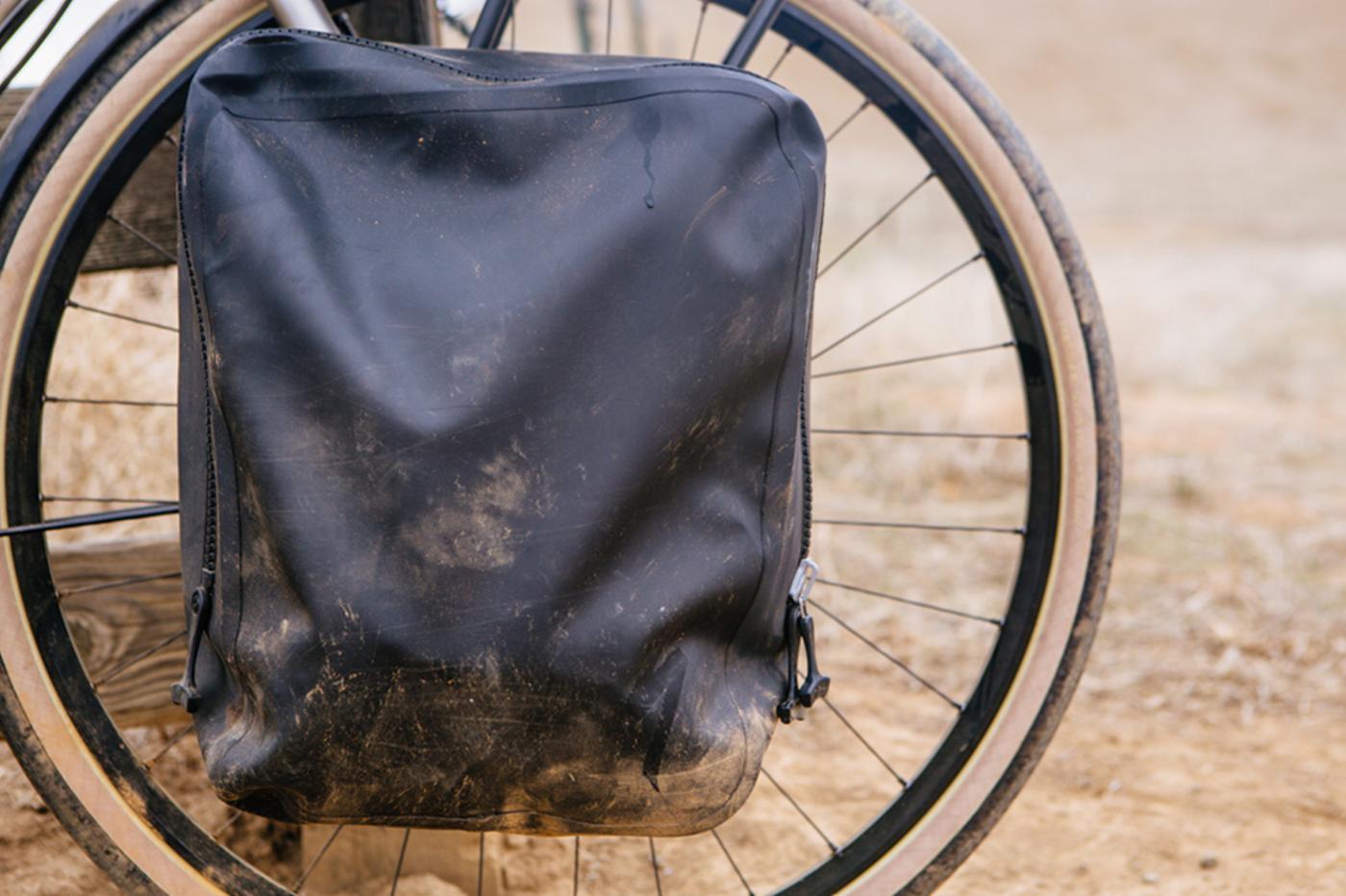 Now, for something that I am not only very impressed with but extremely confident in: the AWOL proprietary panniers. Made by Ortlieb, licensed by Specialized, these panniers use a waterproof drysuit zipper and are completely air tight. 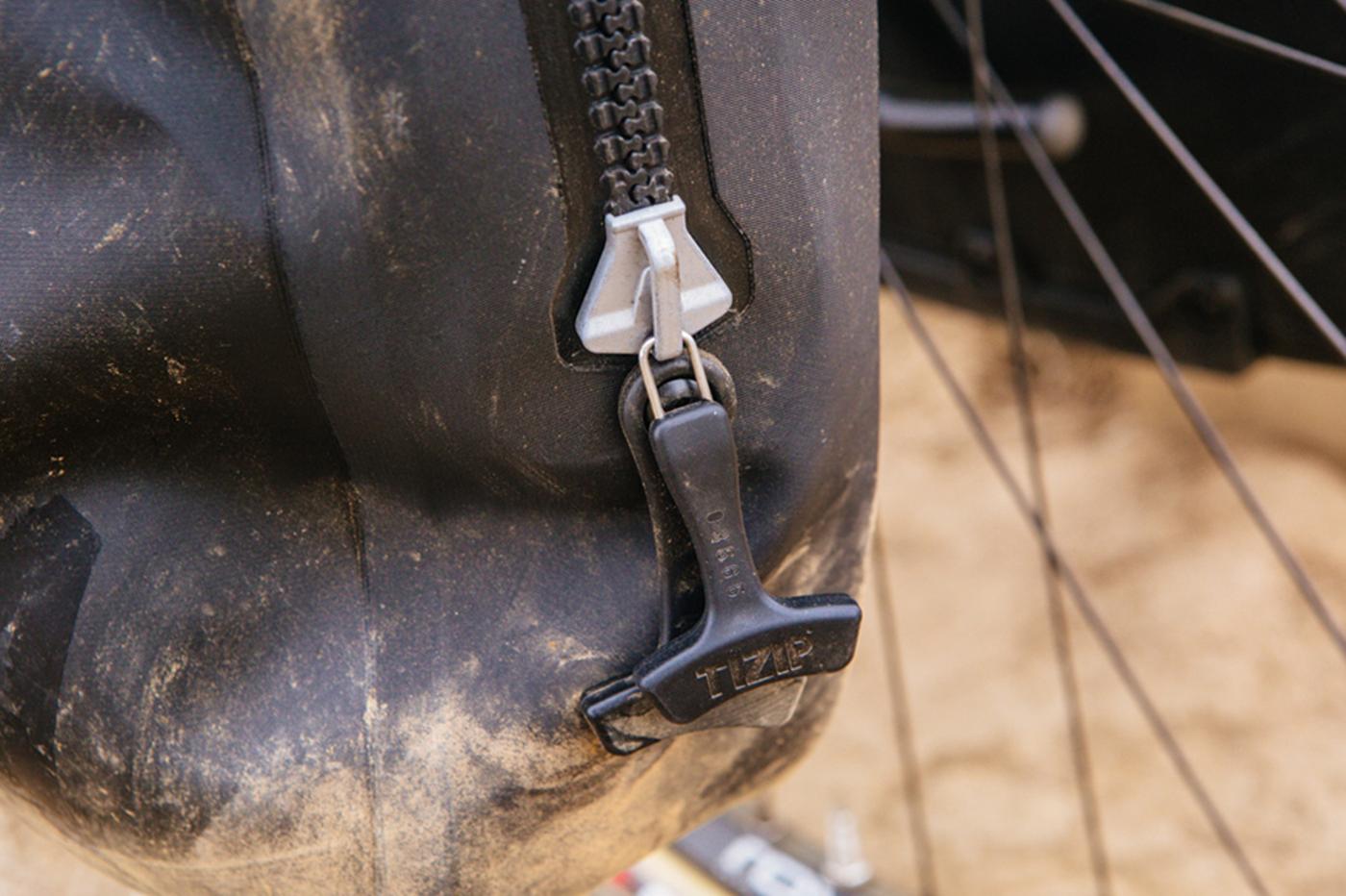 The zipper is a pain in the ass the first few uses, but quickly becomes easier to open and close. Ortlieb also makes a silicone-based spray to help this break-in period. 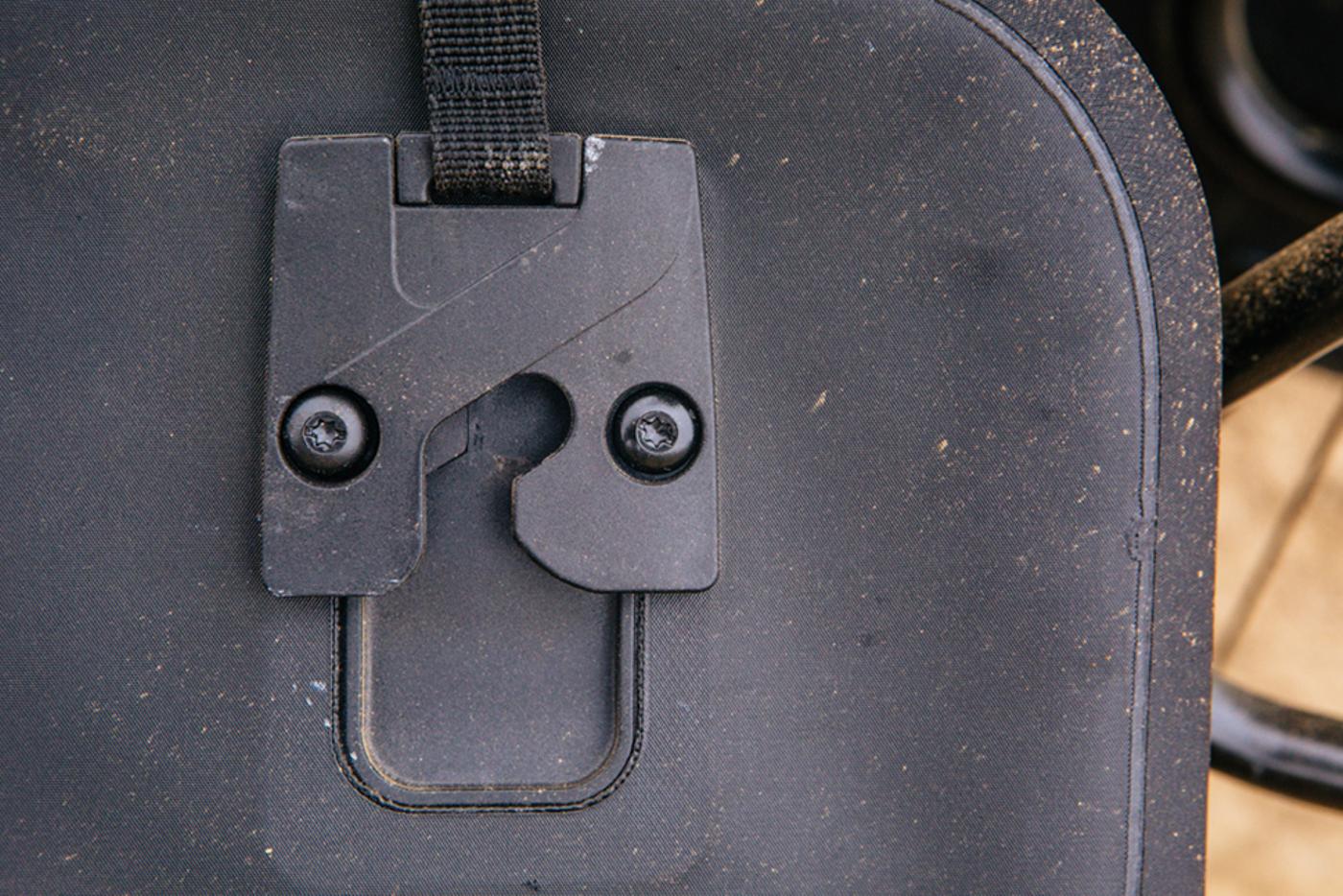 My favorite part of this system is the attachment point. This unique mount allows you to lock on the pannier. It is however, essential that you close the wedge (you can kind of see it here). Essentially, once you slide the pannier onto the notched contact points, you must press down on the tab to ‘lock’ it in. Initially, I had speed wobbles at the front end because I didn’t do this. The bags were swaying back and forth because they weren’t secured. 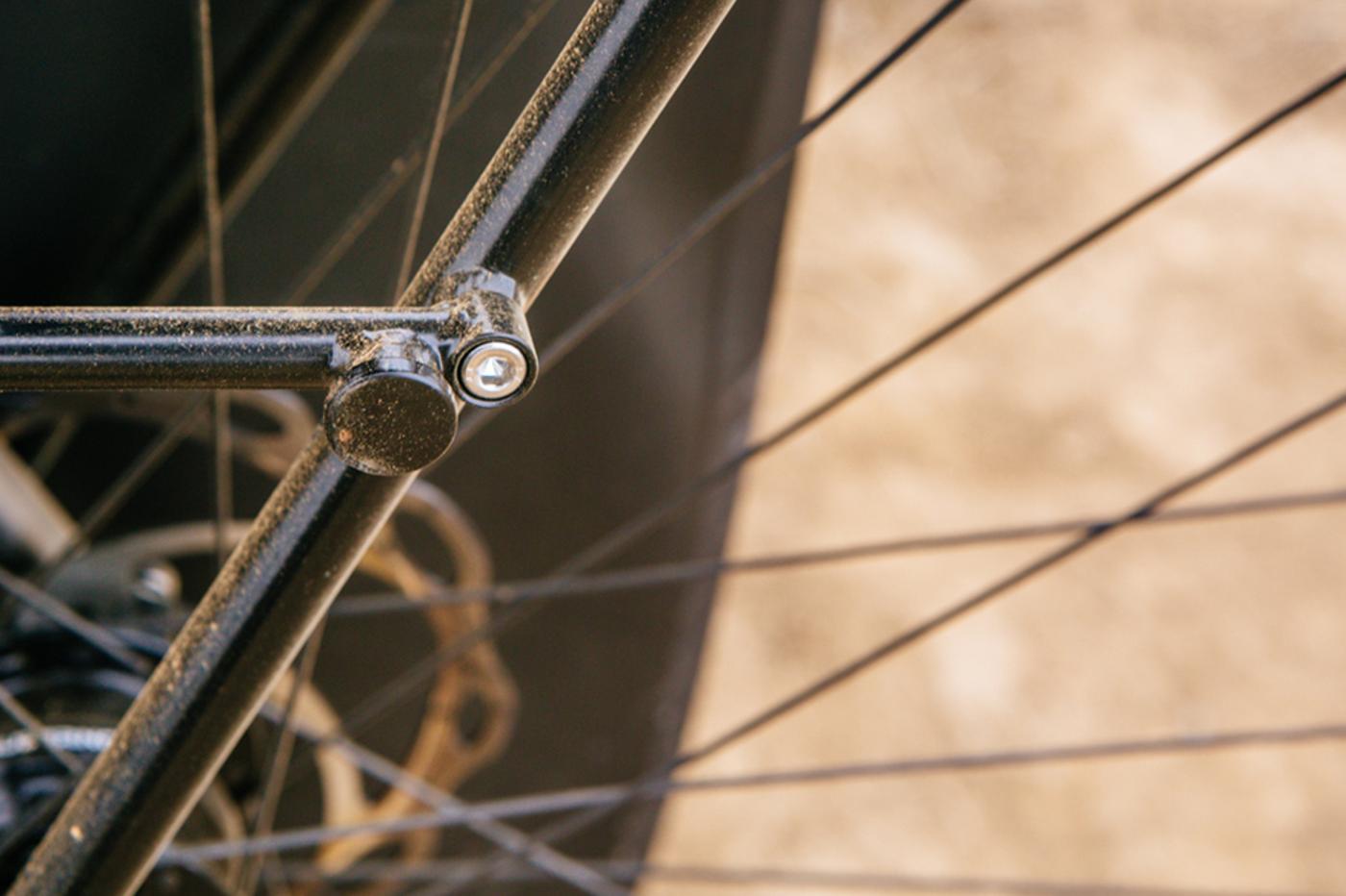 The low rider rack a modified Tara rack made by Tubus and includes a nifty, integrated Supernova bracket (seen above in the lamp photo) as well as integrated lighting wiring. These nodules are where the panniers lock in place. This system is called QL3, designed by Specialized. They’re incredibly secure, even on rutted fire roads.

I am so stoked on these bags and this rack. Especially since they’re made in Germany! 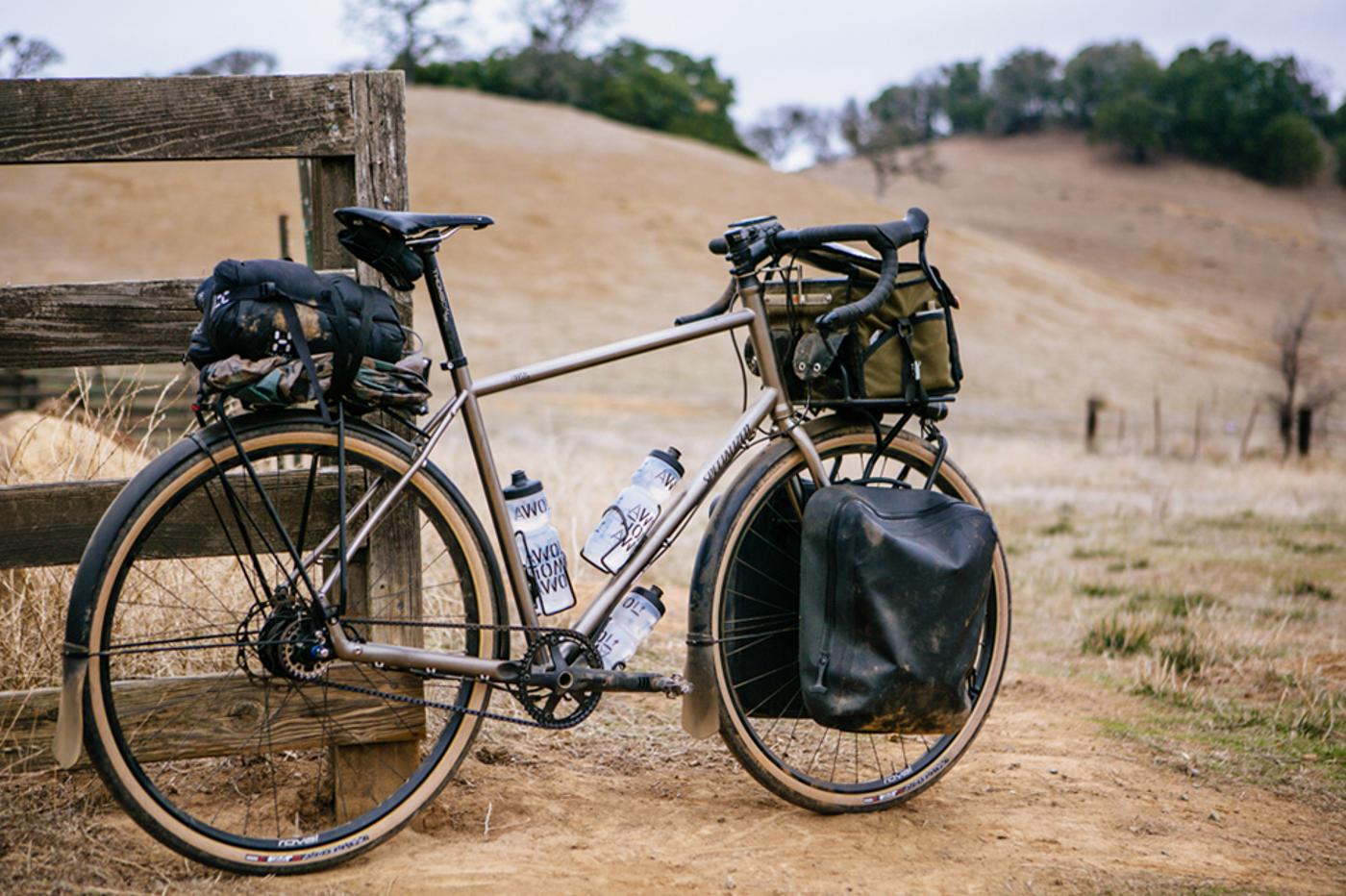 The rear rack is also Tubus, the Fly Evo, which is where I keep a sleeping bag while traveling. Which brings me to my practice of packing a touring bike. If the geometry of the bike is mid-low trail, it will handle weight loaded up front. The front rack puts the bags low to the ground and even with the addition of a porteur rack and randonneur bag, the bike still handles the same loaded and unloaded on climbs and descents.

You can’t say the same about a rear-loaded bike. Rear-loading causes the back end of the bike to sway side to side when cornering or out of the saddle climbing. Rear panniers also get in the way when you have to push up a steep hill, or push your bike around. 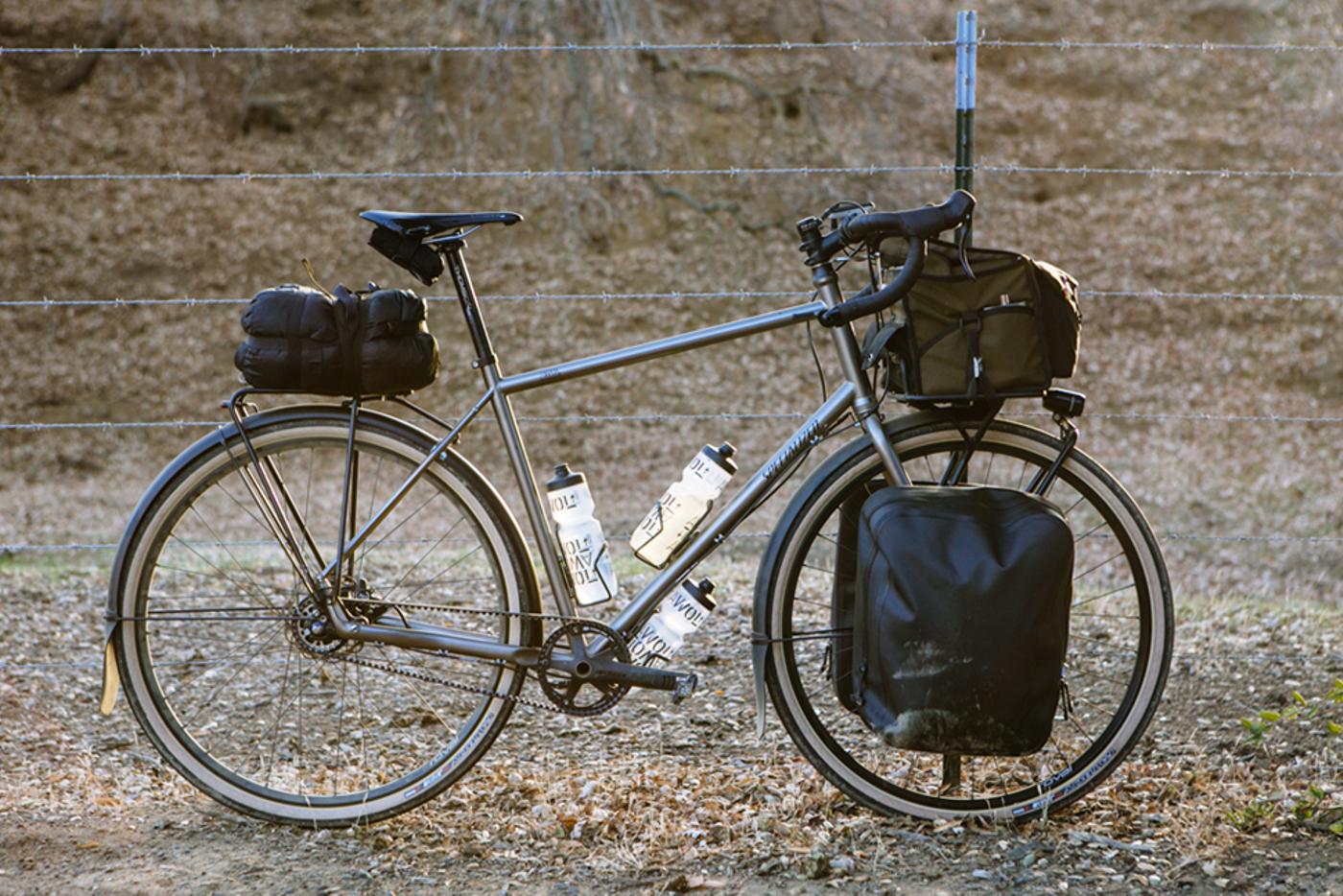 This, for me anyway, is the only way to travel and it’s an exceptional design decision to present, market and sell the AWOL to suggest such a loading principal. Seriously. If you haven’t tried loading backs up front, as low as you can get them, you should give it a try.

So, here’s another point I’d love to make about this bike. When I think of Specialized, I think one thing: performance. I.e. not a touring bike. But what the AWOL team did was a very smart decision: they made the bike performance minded in terms of the technology (components) and made the ride be the most important part.

Maintenance is minimal, even with the hydro disc brakes. The ride is stable, both on and off-road. The geometry, fit and posture of the bike is extremely comfortable when loaded and unloaded, for around the town jaunts.

Criticisms? Well, I feel like it would help if the bike shop that sells the AWOL ask the consumer a series of questions, allowing them to dial in the gear range. Right now, as sold, the lightest gear was barely enough for me to climb steep grades on dirt. That said, maybe the consumer won’t be riding as much dirt? Again, as is, it’s probably fine for 75% of consumers.

I also feel like with all the new technology on this bike, that the wheels should be tubeless! Especially with disc brakes. It’d be nicer to run a lower PSI when loaded on dirt. Also, with thorn protection. All of our flats on this ride were from thorns or road debris.

For the AWOL to be successful, people will have to be told about the longer top tube and shorter stem fit philosophy. The last thing you want to do with this bike is buy your correct size and throw a longer stem on the bike. It’ll alter the handling considerably.

What I will say is, if I didn’t have a touring bike already, and was looking for an off-the-shelf production bike, I would highly consider getting one of the Specialized Edition AWOL Transcontinental bikes. It’s so unlike anything else in my stable and yet, for some reason, I’m ok with that. The positives outweigh any minute critiques and I really think it’s one of the most unique options on the market today.

These bikes are limited to 100 pieces, come with a tin camping mug, fenders, low-rider rack, rear rack, lamps, panniers (basically everything but the porteur, rando bag, post and saddle pictured here) and can be ordered now through your Specialized retailer late February for around $3,200. For more information on the AWOL, stay tuned! For now, head to AWOL’s page at Specialized and follow AWOL on Tumblr.