I’d be willing to bet that if you surveyed a handful of frame builders, asking them what one of the bigger challenges they face would be, their answer would be paint. At least with the builders I converse with frequently, paint seems to be their biggest inconsistent component in the equation. From late jobs, to increase in rates, for someone who is trying to deliver a product on time, paint can be the literal last straw.

Perhaps this is why so many builders are moving towards in-house paint. Or, I should say, smaller framebuilders are moving to in-house paint. A move that Vanilla Bicycles decided would be a key development in their operations early on. The world looks to Speedvagen and Vanilla for inspiration, that’s no secret, but in an attempt to delve a little deeper, I asked Vanilla’s Sacha White to share Coat Paint Shop’s history and future in a Pass the Torch feature here on the Radavist…

The Vanilla Workshop opened Coat Paint Shop in 2006 to paint Vanilla Bicycles and later, Speedvagen. Coat also served local builders like Ira Ryan, Signal Cycles and Metrofiets with paint and powder services for a number of years before deciding in 2014 to focus exclusively on Vanilla and Speedvagen. Below is a bit about how it all came to be in Sacha’s own words.

The truth is that the good and the reliable painters were maxed out. My local guy was working on moving his shop and before I knew it, six months had passed without a single bike being painted. If a bike doesn’t get painted, I can‘t send it out. That was a six-month-plus window that nearly killed Vanilla and put my family and me on the street. It was the kick in the pants that I needed to do something I’d been thinking about for a long time: open my own paint shop. Five months later, the new space was built out and frames slowly started to flow again. Relief.

At that time I had been using decals and when we started our own paintshop, the guy I brought in brought with him the ability to spray graphics, using detailed stencils that we would make right there in house. This opened things up so that each bike could be different, or more to the point, each bike could build on the last. In the past we’d have a set of decals made, locking us into not only certain graphics, but also into certain sizes and colors, too.

As far as the aesthetics of our bikes, color—specifically our unexpected combinations of color—are a big part of who we are. The introduction of this new method freed us up to tweak colors for each bike, often mixing them by eye to get the combination of up to seven colors on one frame, just right.

This new way to apply graphics meant also having the flexibility to do whatever we wanted with graphics, and how they’re laid out to create the paint scheme as a whole. If you look back to 2007-08 you’ll notice the bikes started to look really different. Not just from what we had been doing, but different that what was being done anywhere in the industry. All of the centerline striping that you see on our bikes and on tons of other brands since then, started with our Speedvagen road prototype in late 2007.

“After hot fades, what are you left with?”

Our customers, and the people who don’t own one of our bikes but like them, expect that our bikes are going to look great. And while style is deeply important to us, the stuff that is going to keep someone coming back to their bike is not the pretty stuff. It’s the fit and the function and the way that they’ve been taken care of throughout the process of having their bike built for them. It’s like the difference between a one-night-stand (or several?) and a long-term relationship. After “hot” fades, what are you left with?

The bikes look good. That’s expected and honestly that’s kind of the easy part. A given. What’s harder is everything under the surface; what I call the deeper value that we bring. Nailing the fit, and then the design (how a bike rides and how it looks) and then the fabrication, with paint being the bow on the package. If you don’t have the first three, then what do you have? A bike that fits well and has a good design, but fabrication that doesn’t execute the design? A good design and good fabrication that’s based on a bad fit? Good fit and precise fabrication of a bad design? All of these are going to come up short. They’ll be just some fraction of the great that they could be.

Beyond the big, more conceptual stuff are a bunch of small details that make a complete and balanced machine. Things like our brake bridges, Berserker dropouts and down tube stops are small touches that culminate in a bigger picture and help us answer the questions we were asking ourselves. Questions like: Why are dropout faces, (a high wear and tear area) always painted? This is a place that wants raw metal (Stainless steel in our case). And what can we do with this downtube cable adjuster, (an element that typically weakens a frame) so that it wont create added stress on a very thin and very light tube that takes a lot of the impact from the road? It is questioning tradition that has brought us, over the last 15-years, to a frame that uses virtually no standard materials. Nearly every part of our frames (from our tubing to our cable stops) have been designed and made for us, or by us, not because it’s easy, or cheap (they are neither) but because they are right.

So while paint is happening, we’re down on the fabrication floor cutting, mitering, filing, brazing… The ability to easily move between fabrication and paint design offers up a lot of opportunity to develop a new idea. Scale paper samples can be cut and taped to a down tube, while a color test is being painted in the back and we can live with it for a few days to see if it works. 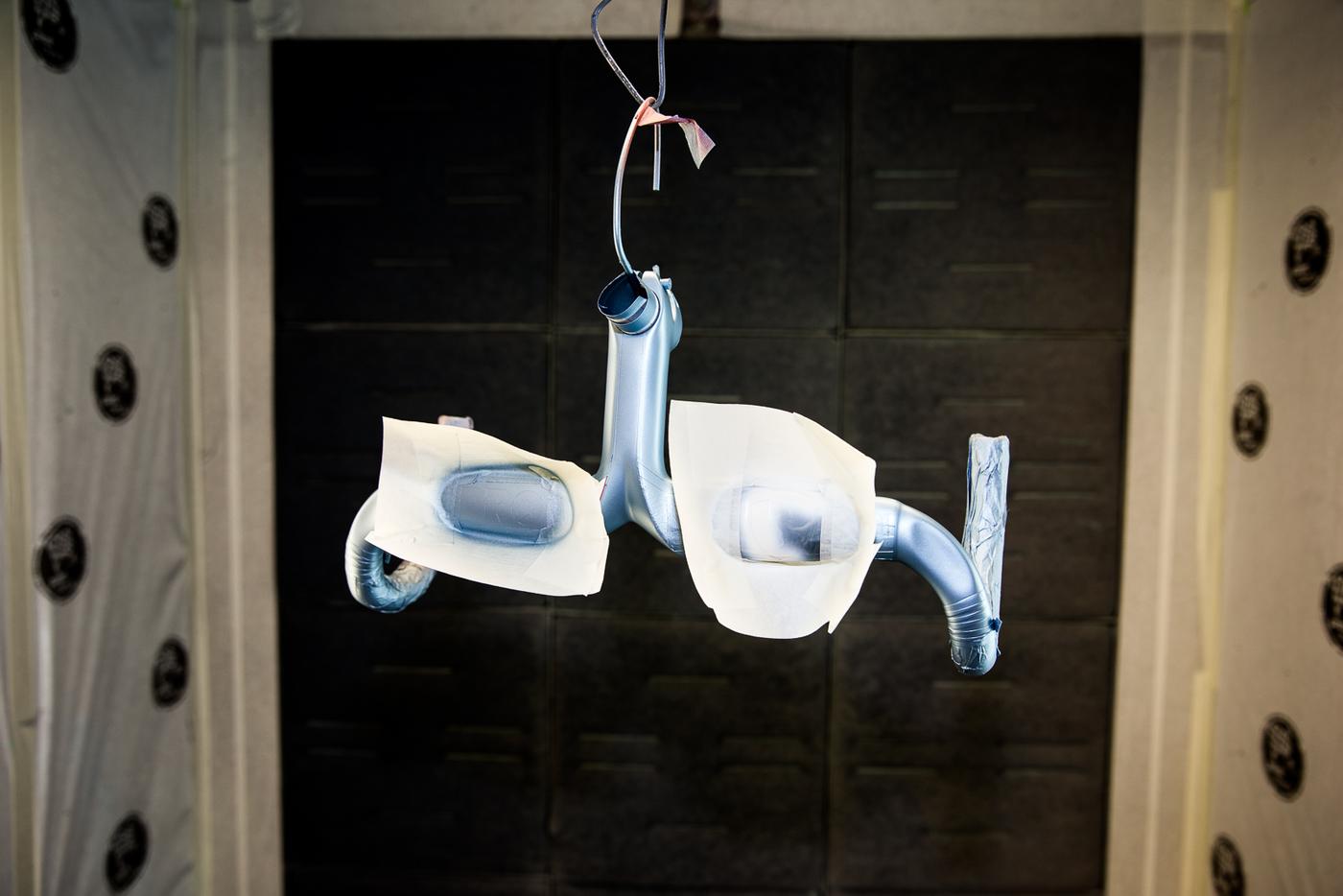 Now, I don’t want to give the impression we’re designing every scheme as we go. But, we get to play a lot and that results, eventually, in what you see out in the world. For example, the 2014 Surprise Me! we just released was the culmination of ideas and iterations that began two years ago. It had to take shape over time and the finished product is something that is totally new. We like it.

Taken together there isn’t one piece of this puzzle that outweighs the others. It’s each piece: fit, design fab, paint and the way that we bring the customer into the fold, done under one roof, that makes a bike that rides right and looks right.