I live less than a mile from Woodhull hospital in Brooklyn. In the last five weeks, my calm neighborhood quickly became one of the most saturated with COVID-19, and with that: the never ending song of ambulances. I don’t know what to do, but I know I can’t sit in the house and listen to people die all day. And I definitely need to get off social media. After some digging around, a friend connected me with CoronaCouriers, a mutual aid food delivery organization that is taking care of vulnerable populations. As soon as I filled out the volunteer form, another friend sent me a link for NYCPPE, a grassroots organization delivering n95 masks and face shields to healthcare workers. While waiting to hear back from CC, Make The Road NYC called and finalized volunteer details about their foodbank in Queens. My new routine emerged and I was back to my normal: mildly overwhelmed and constantly moving. I check my WhatsApp against my Slack every morning to route my day and add where I can. This often starts by biking to Jackson Heights, Queens in the morning to deliver for a food bank for two hours. From there, I head back toward central Brooklyn to pick up PPE for NYCPPE. Along that route, I’ll check into the Corona Courier slack and try to pick up a shop+deliver along the 8 mile stretch. Once I pick up the PPE, I’m up and over the Williamsburg bridge to deliver. My usual route is Midtown, then Upper East to Upper West Side. UES/UWS is a loose demarcation and I generally end up going to Harlem and the South Bronx. Once I have some room in my bag and head that far north, I check back in with the CC slack; there are almost always requests for food shop+drops in northern Manhattan and the Bronx.

These are my favorite drops because it’s almost entirely cute old people. My favorite to date was a man in his 70s in East Harlem. He only spoke Spanish and asked me to tell him each item I brought. He stood in the doorway with his bird, smiling as I stumbled through rudimentary words. He repeats each item to his pet parakeet. The bird is very excited about oranges.

Later in the day, I call a friend to take photos for this piece and he joins me toward the end of the week. We meet up on Thursday morning, as the weather took a shit turn. I assured Walt it would be a mellow day, definitely not a standard 40+ mile day… the wind gusts are peaking at 30mph and no one really wants to be out. He seems pleased.

We just met, which means he doesn’t know me well enough to know that I’m 1000% lying to him. That week I had already logged 220 miles. 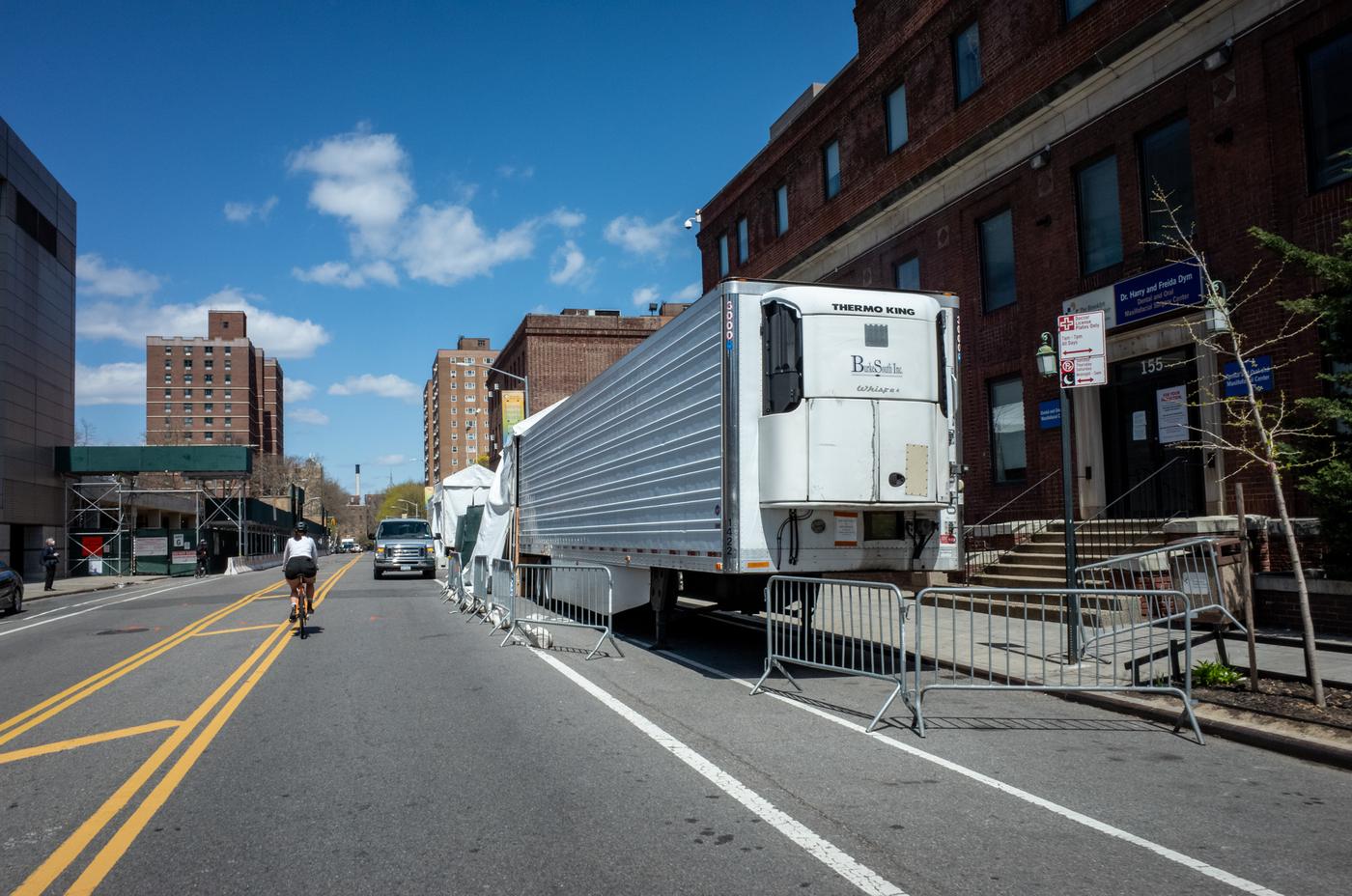 “Did you see the morgue trucks lining the block?” Walt asks when he catches me at the light.  Admittedly, no. They’ve become part of the backdrop, along with ambulances and the shortest funeral processions I’ve ever seen (2 cars!). Every few minutes the sound chimes in and out, and the paltry traffic that still exists halts. Everything reanimates shortly. Rinse, repeat. I’ve become desensitized to 50-foot morgue trucks lining an entire city block, which feels bleak. 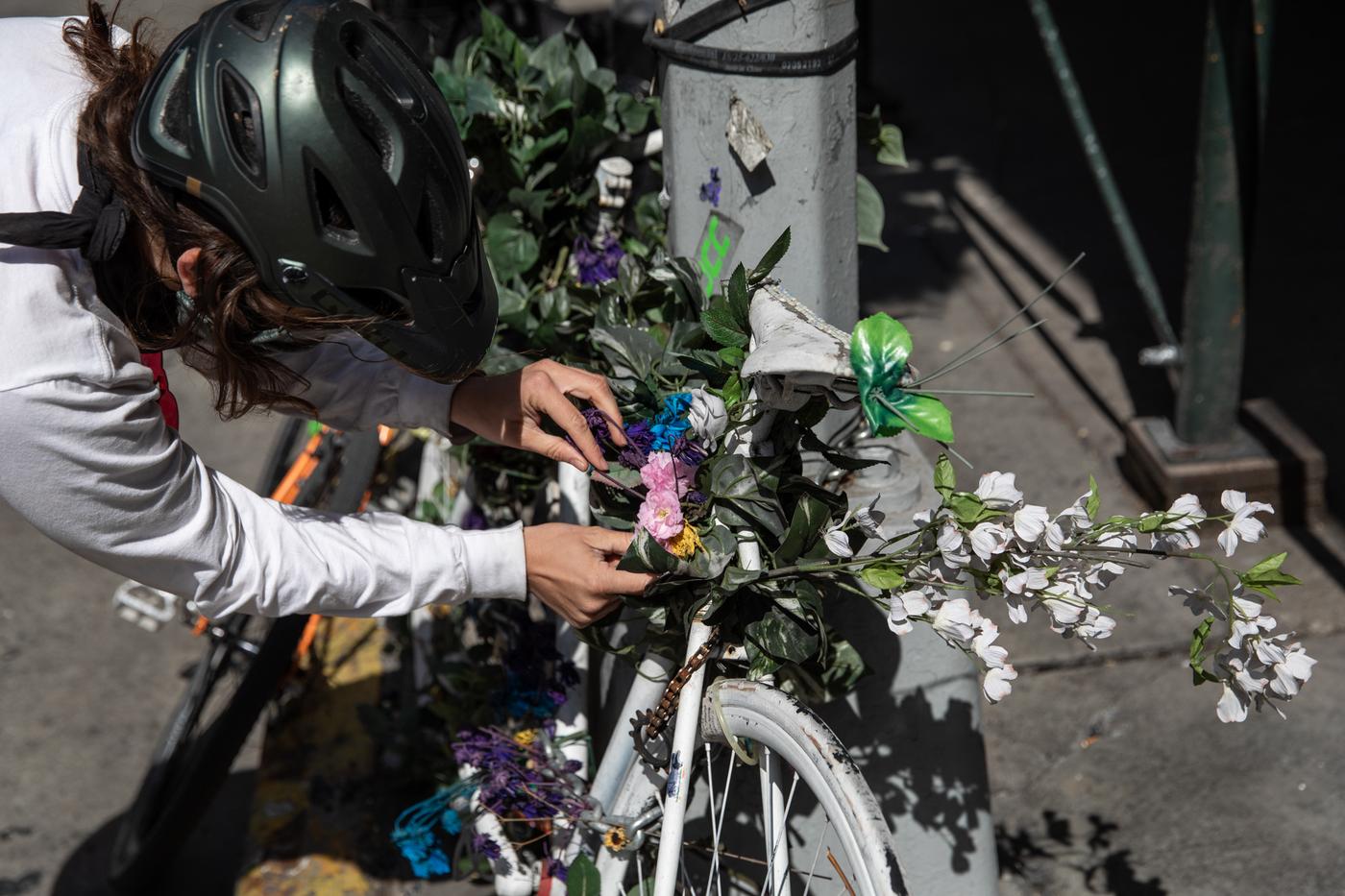 I glide into a group of couriers as we take the middle of the road up 6th Avenue. I pass Robyn’s ghost bike on 23rd st. They were killed last summer, riding in traffic because the bike lane was blocked. There’s a feeling of guilt to be enjoying the free roads when contrasted against the endless ghost bikes. So many cyclist deaths last year; 29 cyclists were murdered in NYC. But for the first time since moving here in 2018, I’ve left my house without the nagging fear that I might get killed. I take reprieve where I can get it. It’s ironic that it would be during a global pandemic.  No one is fucking with bike lanes now. We blow lights with the cops. We have collectively stopped believing in one-way streets, or lanes really. People graffiti messages of support, or desperation, in daylight in Times Square. There is a lawless, grotesque joy to be riding in the city. It doesn’t feel great to say that.

My second drop on Saturday is to a healthcare worker in a notoriously shitty and underfunded hospital. We do a no-contact pass off of the masks, and I say her name when I thank her for her work. Then: she lurches forward, embracing me. Walt is uncomfortable. I am stunned. She apologizes, “I know we’re not supposed to do that I’m SO sorry I’m just so-“ and I get it and she gets it. We are all worn so goddamn thin and we are exhausted and we need. We just need.            It feels like the most honest interaction I’ve had in weeks. I see an NYT report from inside two hard-hit Bronx hospitals. Doctors and nurses are now instructed to hold the hand of dying patients, spend a minute or two with them. When they pass, their name is spoken and everyone is still momentarily.

My clothes from that day sit in a pile on my floor still.

I want to state some alarming fact but the numbers change too often and the presidential tweetstorm gets increasingly bizarre. Seemingly every hour of the last month has been a new nightmare. I want to find a positive spin, which is maybe why I’m doing this in the first place. Anger at the lack of support for citizens, lack of rent and mortgage relief, lack of UBI, etc feels useless. Optimism feels both embarrassing AND useless. We’re told to not work, to stay indoors for the foreseeable future, but have no real solution to the financial burden that causes. I have been out of work for 6 weeks now. After almost 4 weeks, the unemployment website finally stopped crashing and I was able to file a claim. A lot of folks have given up trying to file. Everyone seems more resigned as this stretches out. We stopped giving a shit about 6 feet, about space in general. The mood has turned fatalistic as the death toll hits over 15,000 people. I cannot express how fucking uncomfortable it is to be alive in New York right now. The saving grace has been the community found within these two channels. We share photos of people getting their PPE, or the wild ass ways we try to figure out how to carry groceries for a family of 4 + another for a family of 2 + maybe some side stuff like a box of face shields..in one trip. We share maps of our routes and fix each other’s bikes. We decompress. We all put the fundraiser link on our Tinder and screenshot the results. Bless.

At the end of my second week delivering, I break the lock off the latch to my apartment’s roof and call a friend over. We sprawl out, split a six-pack, and the heaviness of the situation finally settles in me. Four ambulances whine in and out of earshot in the half-hour we spend up there. Later that night, I get 3 solid hours of sleep. I give up around 8, make some coffee, check to see if the n95 mask shipment came. No dice. I open Slack, see what areas need groceries delivered, check the weather, and get dressed. Rinse, repeat.

NYCPPE is a volunteer-run courier service that takes in requests from healthcare workers searching for PPE. They are verified, entered into the system, and provided with equipment as soon as it becomes available. In the 4 weeks of operation, we’ve delivered over 58,000 n95masks and 1,000 face shields for individuals to bring their hospitals. These are workers who have not yet received emergency help on a federal level. To support them, you can donate here

To donate to the grocery fund for Corona Courier, please click here