When I was a child and about to get my first bike, a hand-me-down turquoise kid’s bike with pink and purple streamers, I remember being elated. I loved those streamers and couldn’t wait to ride around the neighborhood with them blowing in the wind. However, my father had different plans and cut off the streamer and put a playing card in the spokes — his attempt to turn it into a “boys” bike. I was devastated and barely rode the bike. This was just one instance of my struggle with society’s gendering of inanimate objects, and the social acceptability of my interaction with them. I always found solace in the illustration of Lisa Frank, which depicted a fantastical adventure free of gender where everyone has fun and gets along. In many ways, I find this same sort of adventure, acceptance, and escape from reality in bikepacking, and I’ve long wanted a bike that reflects this. 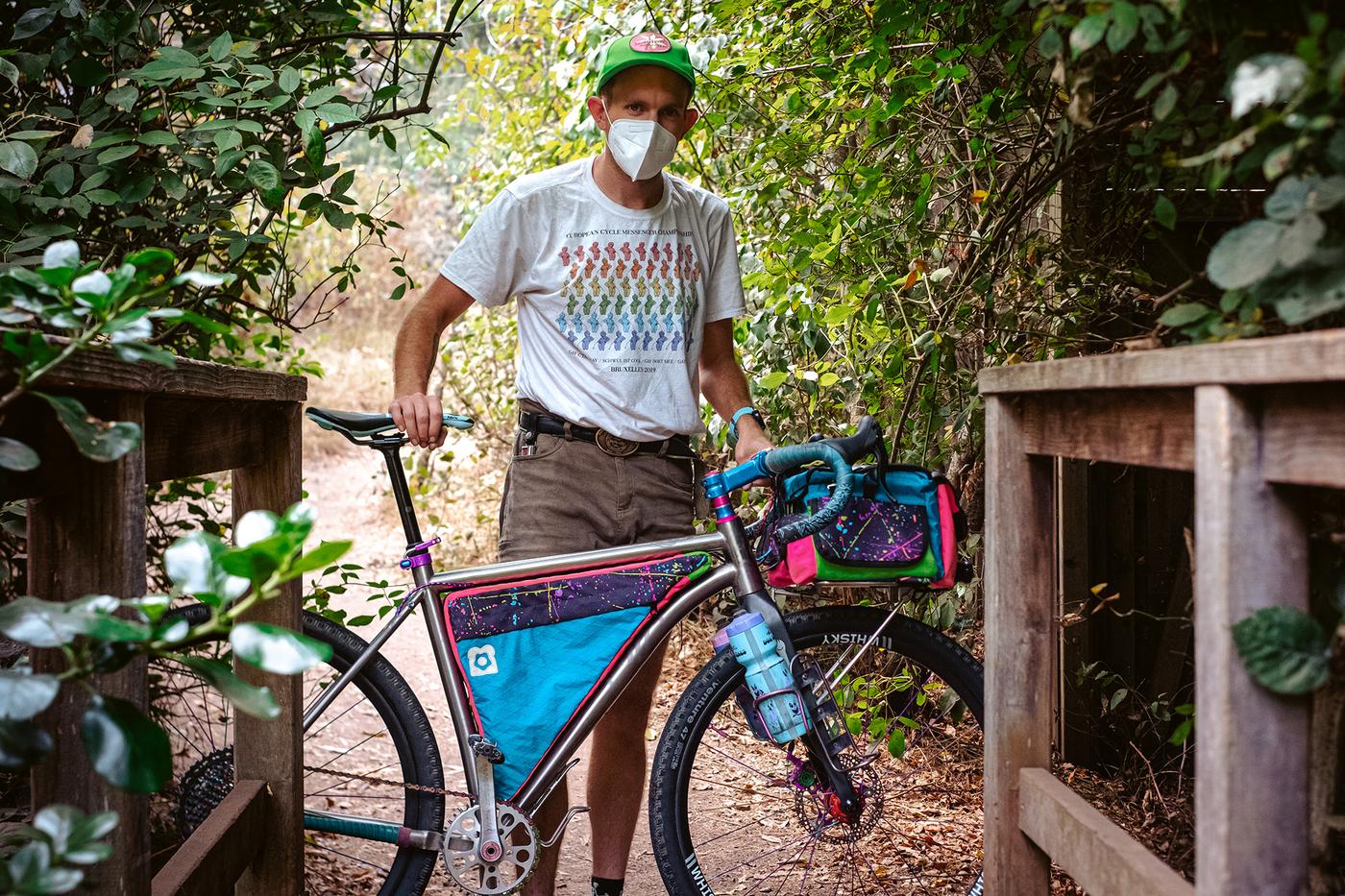 Whenever I work on a custom bike-build I view it as a work of art and tend to overthink every detail — this bike is no exception. It started with the idea of a mechanical 12-speed drop-bar ‘mullet’, something I was frustrated no bike component manufacture supported. Although there are aftermarket solutions none were as clean or integrated as I envisioned. Then came the idea of combining Campagnolo’s 12-speed road bar shifters with a SRAM 12-speed MTB derailleur and cassette, and with the help of a Jtek Shiftmate, I realized this is possible. What’s more, I found it possible to do so in an ultra integrated manner by replacing the cable pulley in the Eagle derailleur with the Jtek pulley, essentially creating a Campy road pull Eagle derailleur. It also became possible to turn the left shifter into a dropper-lever by removing the thumb shifter knob and replacing a few ratcheting mechanisms with spacers. Then came the rest of the build, I knew I wanted something that was as colorful as my personality while also functional on a multi-month off-road adventure. In a nod to my home state of Colorado, I chose a Why Cycles R+ frame and a Rodeo Labs Spork. Together lending enough mounts to carry anything I might need, strong enough to trust on roads far from home, and light enough to carry over those hike-a-bike sections. Not wanting to forget the high-quality bike component manufacturer in my current home of Northern California, I went with White Industry cranks and rear hub, Paul brakes, stem and seatpost collar, and WTB Venture tires. The many anodized colors of White and Paul also helped to solidify my Lisa Frank inspiration. I further sought out as many anodized or bright colored parts for the rest of the build, including Pillar rainbow spokes, Hope purple and orange rotors, and anodized Son front hub and rear light. Function is important, but so is fashion sweetie. Speaking of dynamos, using one on this build was a no brainer. I’ve had a Sinewave Beacon coming on 3 years now, and of course, it made the move to my newest bikepacking rig. The ability to charge accessories as you ride and never being caught without a light is priceless on a long trip. I’m a bit of a kook when it comes to finding adventive ways to wire and mount dynamo lights and this was no exception. I drilled out my VeloOrange rack to run the wires internally through the rack, and furthered the internal routing in the frame with the wiring entering with the dropper cable and exiting through a drain hole on the chainstay. Creating for a clean look free of exposed wires to get nicked when I inevitably crash. 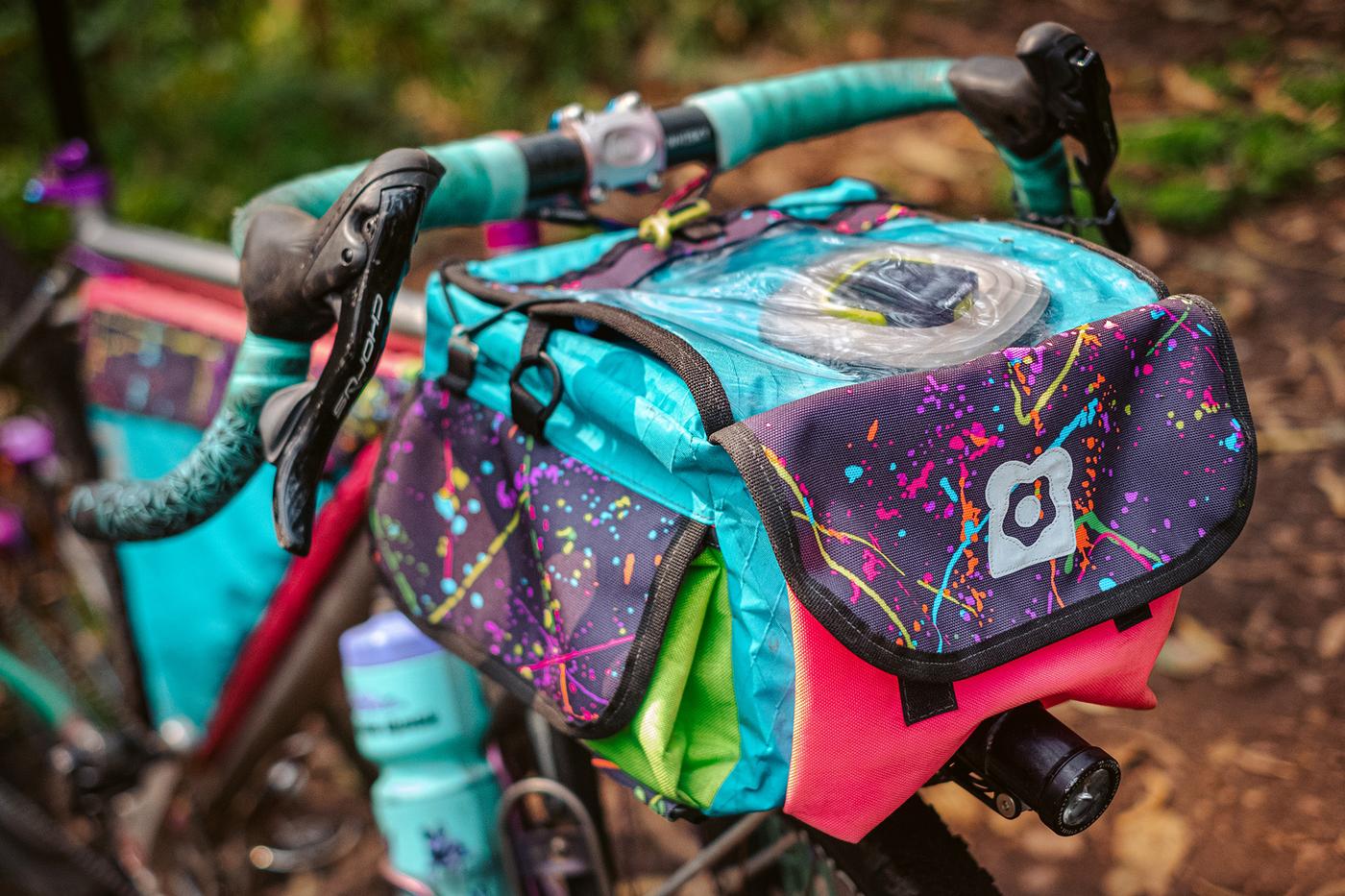 The finishing touch on the bike has to be the bags. I knew I wanted bags as bright and colorful as the rest of the build which I also knew meant custom bags (why are the colors on production bags so drab?). I went with custom bags from Rocky Mountain Toast, this up-and-coming maker from Colorado reminded me of a younger version of myself and I knew they’d be able to capture the aesthetic I wanted while also creating quality bags. These bags have lived up to expectations and even include internal routing for my charging cable to connect to my light’s USB port. It’s been about 6 months that I’ve had this bike built up and in that time I’ve put about 2000 rugged miles on it and it’s everything I could have wanted out of an adventure bike. Both functionally and aesthetically. Even weighted down it can handle just about any road or trail I can throw at it and climb almost any hill. The ‘hacked’ rear derailleur can be a little finicky to get set up just right, but once it is dialed in it works like a champ. And most importantly when I ride it I feel like a kid again, come alive in a Lisa Frank illustration free to ride that colorful bike around the neighborhood and beyond.