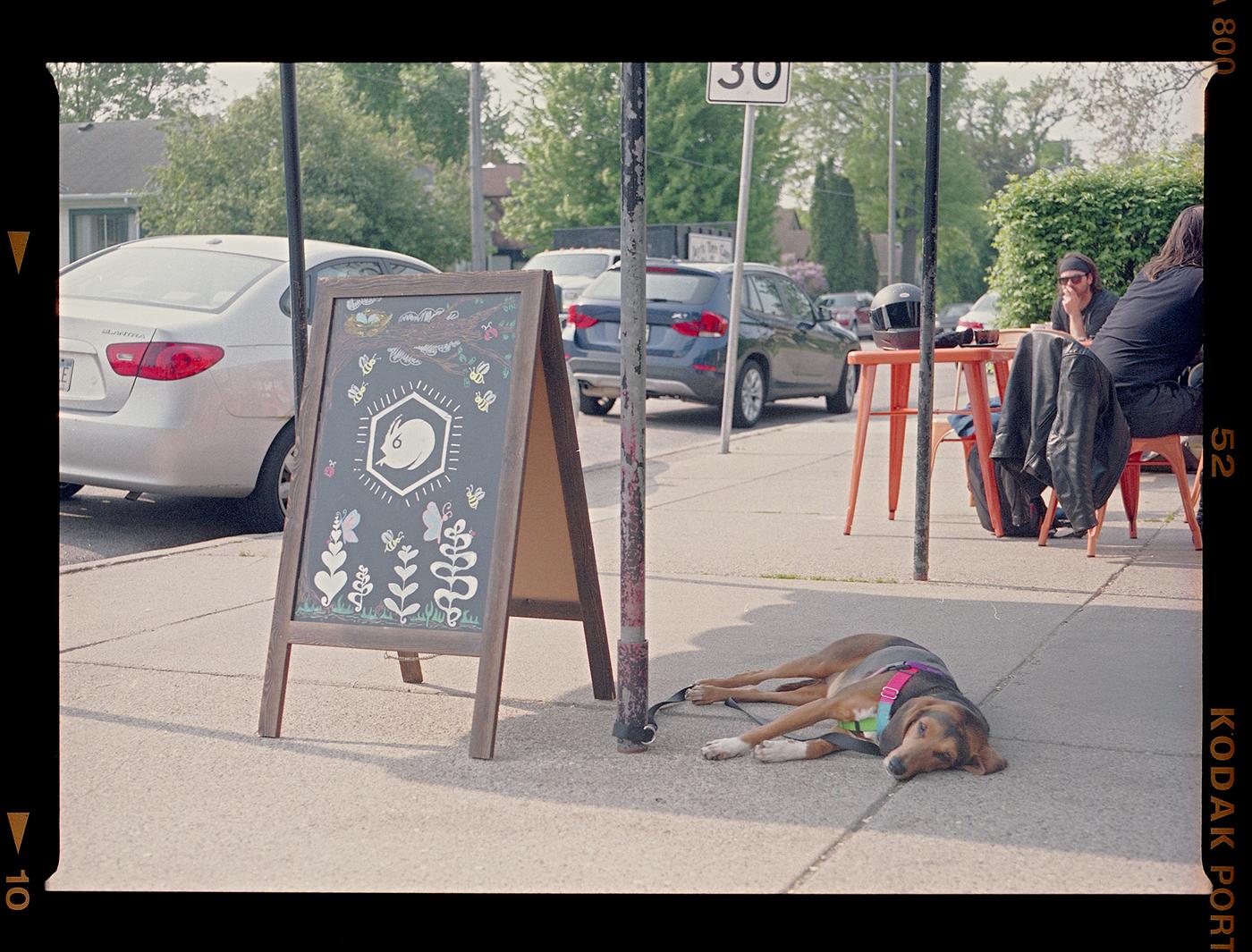 05/27/2019 – It has been pouring rain here on my first day in Minneapolis. Everyone has taken the time to give me a very sincere apology about it. At this point, I just smile, nod my head and say, “It’s totally fine.” After a little while I tried to lengthen the “O” in “totally” to sound more Minnesotan. “TÖADALLY fine,” I’d say. I wasn’t intending on doing much anyway since I’ve been awake since 3 to catch my 5 AM flight.

Chris, whose nickname is “Chips,” and Jenna picked me up from the train station. We drove around in the rain trying to find a place for breakfast. After stopping at a couple restaurants that had over an hour wait, we ended up in St. Paul at a small corner diner called Colossal. While running from our parking spot, jumping over puddles, I asked, “Is this place the namesake for the Salsa Colossal?” “That’s right!” someone shouted. We walked in. The entry was surrounded by heavy red curtains. We grabbed a round of coffee and sat down. It was my fifth cup that day.

Jenna spent half of breakfast quietly writing on a sheet of paper. As we stood to leave, she extended both of her hands out and gave it to me. On one side it had an extensive list of things to do and see in Minneapolis. The other side had her grocery and a weekly to-do list. As I looked up to thank her, she blurted “I like to make lists!” 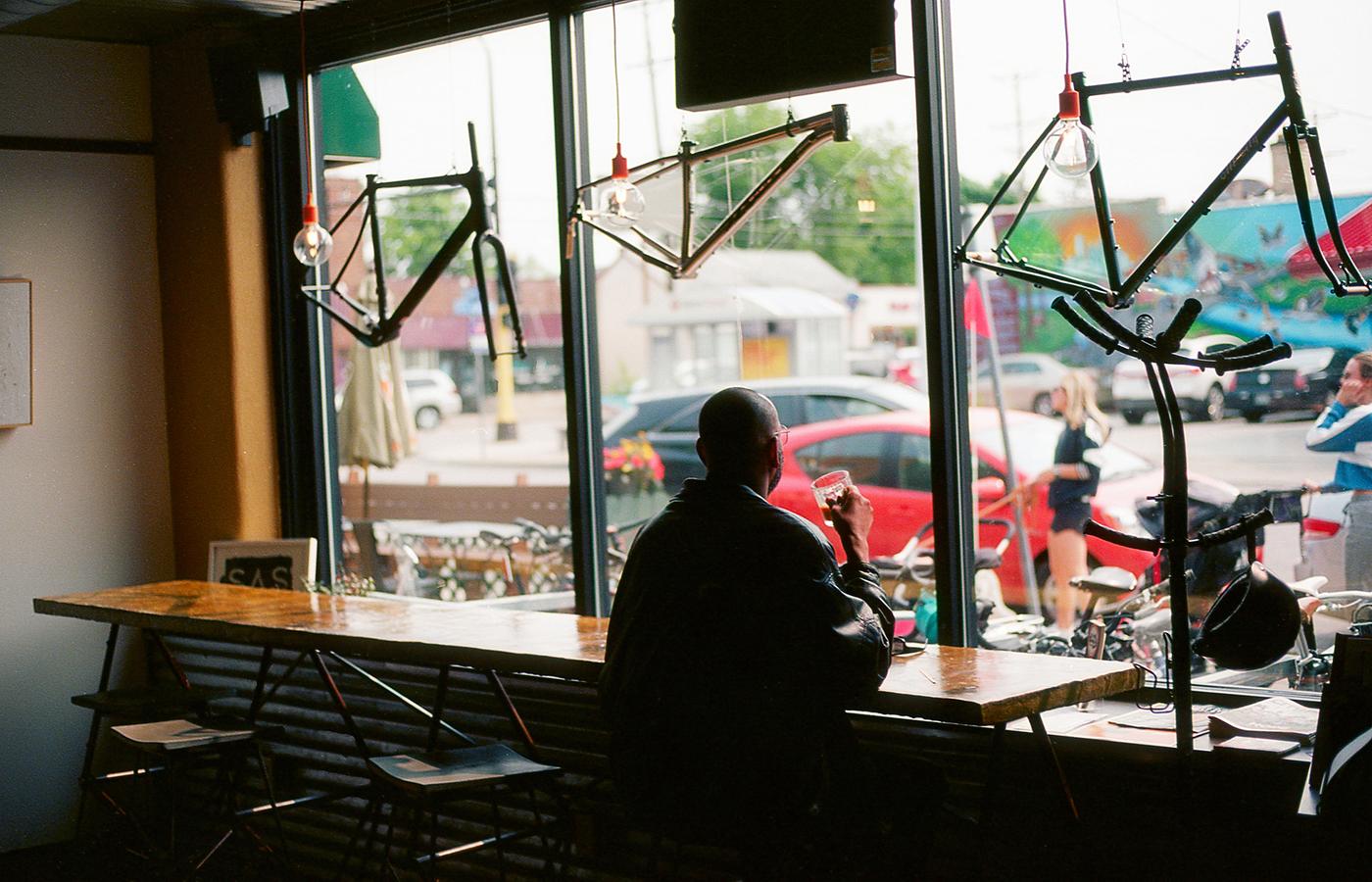 5/29/2019 – The bathrooms here are really clean. I am not sure why this surprises me, but it does. Come to think, this whole place is spotless and organized. In the service area, for instance, every single tool at all three benches has a very obvious home. The drawers are filled with a fluffy, gray foam block in which several tool-shaped carvings are cut out, making it impossible to put a tool where it doesn’t belong. In the back, there are probably a hundred small drawers and bins, each labeled with a number. I think “0110” was brake noodles.

After one day I knew where everything was without asking. I also get free coffee while working, which is dangerous. I am starting to feel dehydrated. 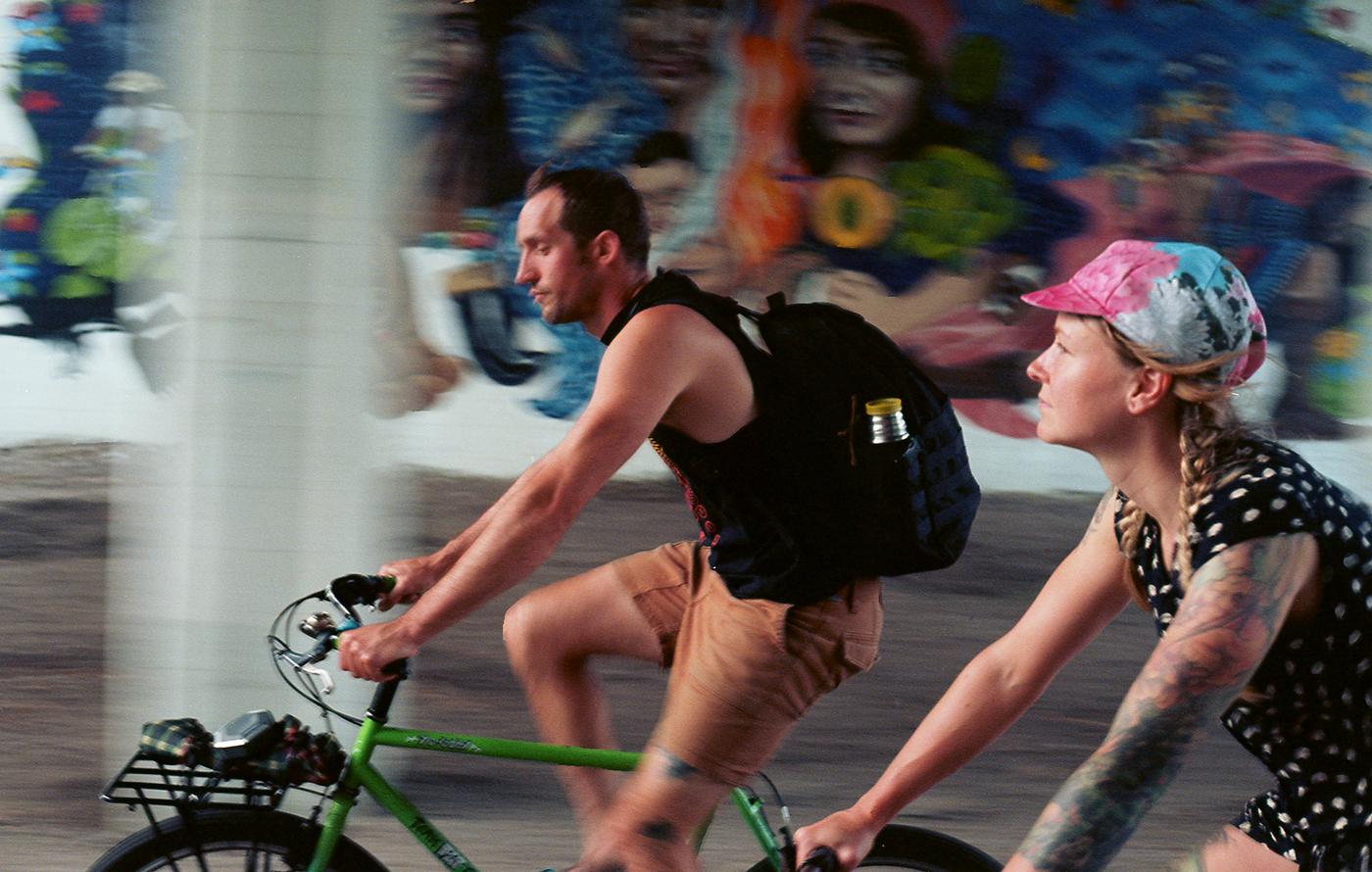 5/30/2019 – Jeff, Chelsea, and I went mountain biking on some in-town trails. We took the greenway from their house just before sunset. You could tell which trails were new and which had been around since the 90s (or earlier) by the handlebar clearance between trees. I definitely ate it from slamming the end of my bars into one. You have to get up and ride away as quickly as possible when you fall up here or else the mosquitoes will get you!

Seemingly out of nowhere there are massive cinder blocks in the middle of the trails. I have so many questions… 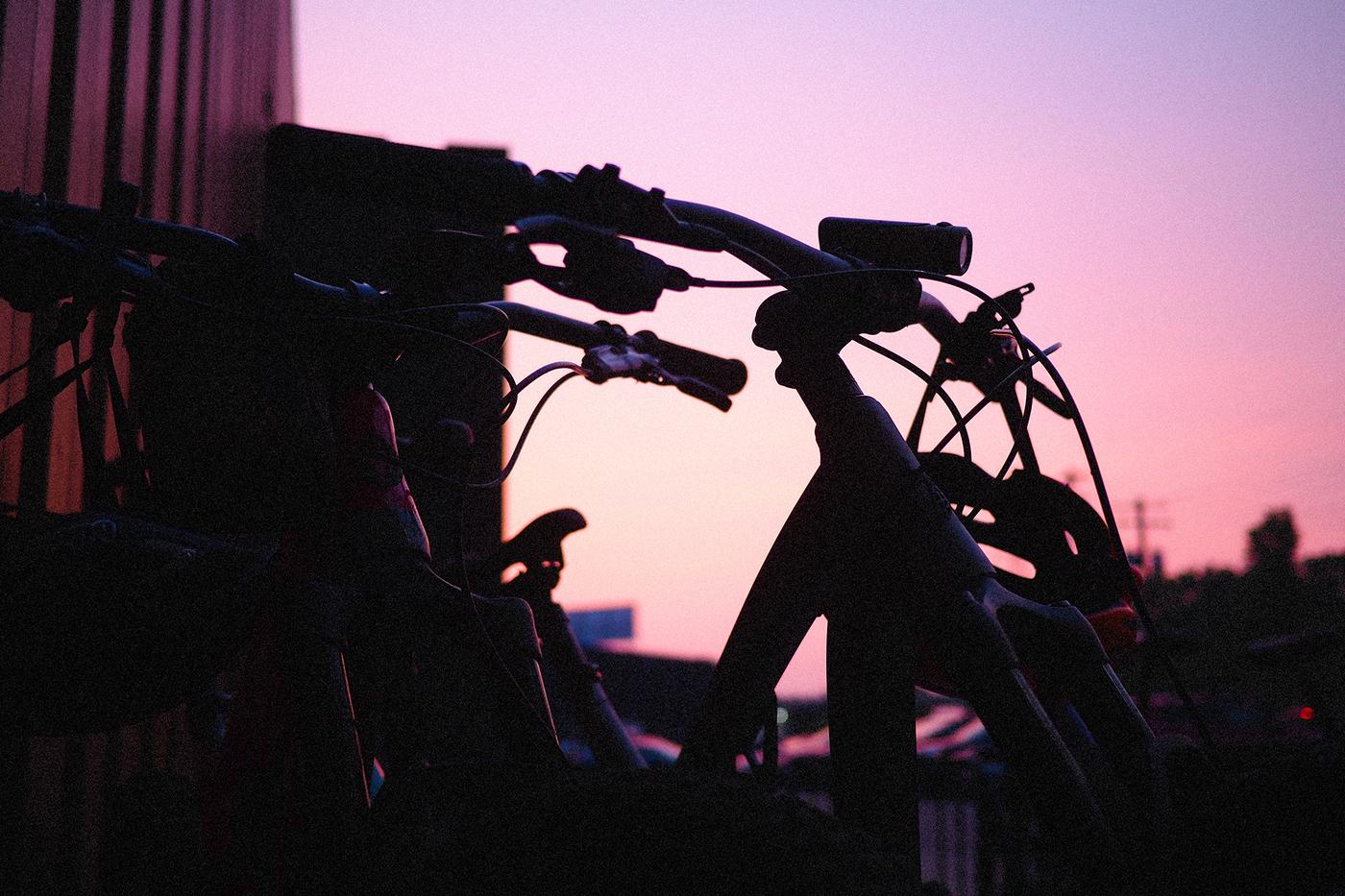 We stopped for a beer at Utepils Brewing mid-way through. The sky turned fluorescent peach as the sun buried itself below the horizon. Someone mentioned that there were wildfires in Canada and that those were causing the sky to look so pretty. While sitting down on the ground, I leaned into the exterior wall. It flexed against my weight. I thought to myself, “Oh yeah, we are really close to Canada, aren’t we?” Jeff and Chelsea were on a small set of stairs beneath a large buzzing light. Feeling slightly buzzed and vulnerable, I started to tell them about my mother’s fight with breast cancer but was suddenly interrupted by two men getting into a shouting match over a cigarette.

We eventually rode off into the darkness. I chased them around for another hour or so over bridges, across railroad tracks, and through several trails when suddenly we ended up at the Walker Sculpture Garden. We stopped and stood under the famous Claes Oldenburg spoon sculpture. Two young men were laying in the grass making out next to us. In a state of complete bliss, one of them stopped and shouted, “Oh, don’t mind us!” Jeff looked over and responded, “You’re all good, bud.” 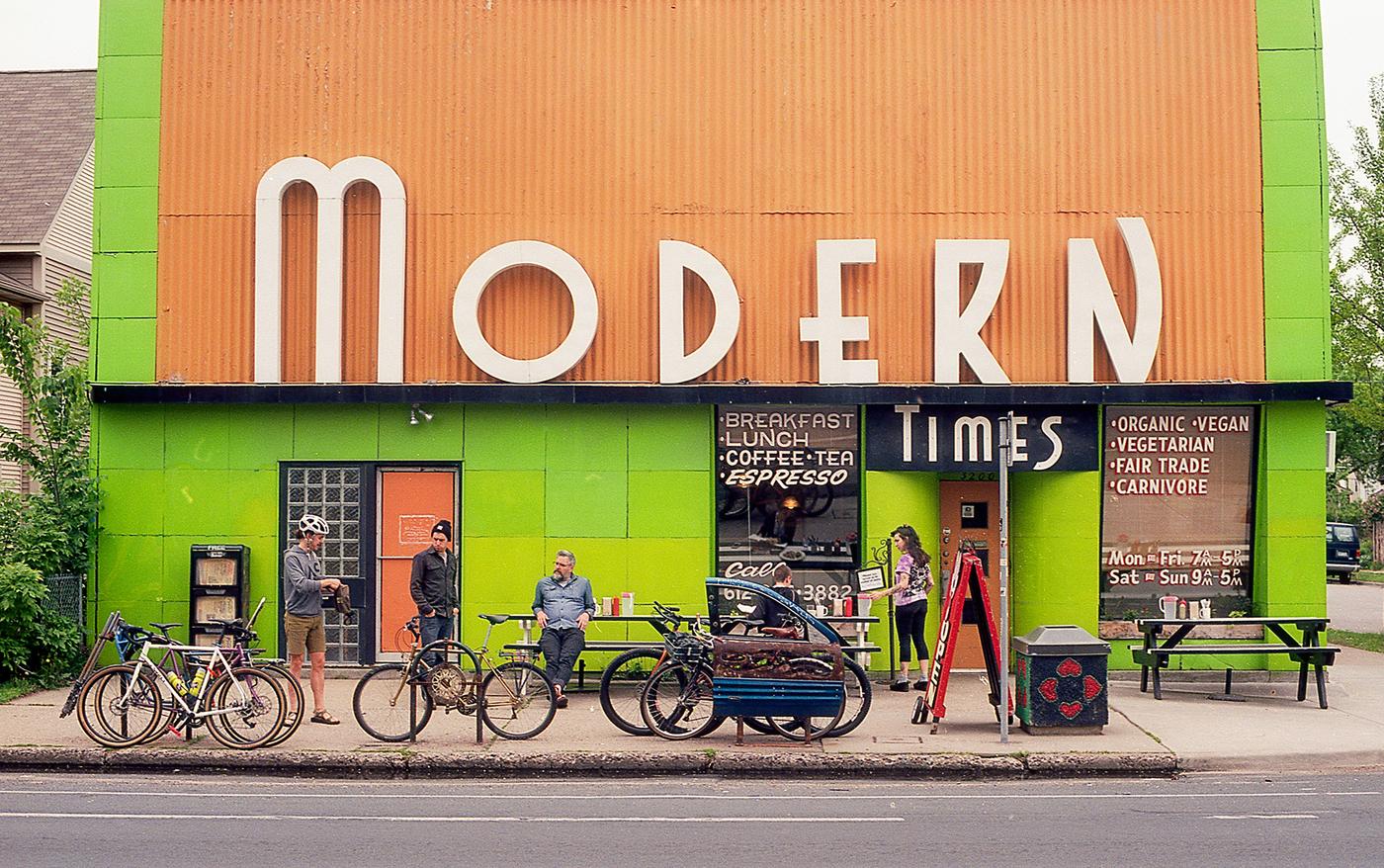 5/31/2019 – The lilacs are in bloom here. I just noticed them. The air is starting to warm up, too. Although yesterday everyone in the shop kept talking about the humidity. It still felt pretty dry to me.

I’ve gotten into a good groove at Catfish now. The pile of new and sold bikes in the basement is my main focus. Every day another handful gets added to the pile. I’m beginning to think it’ll never stop. 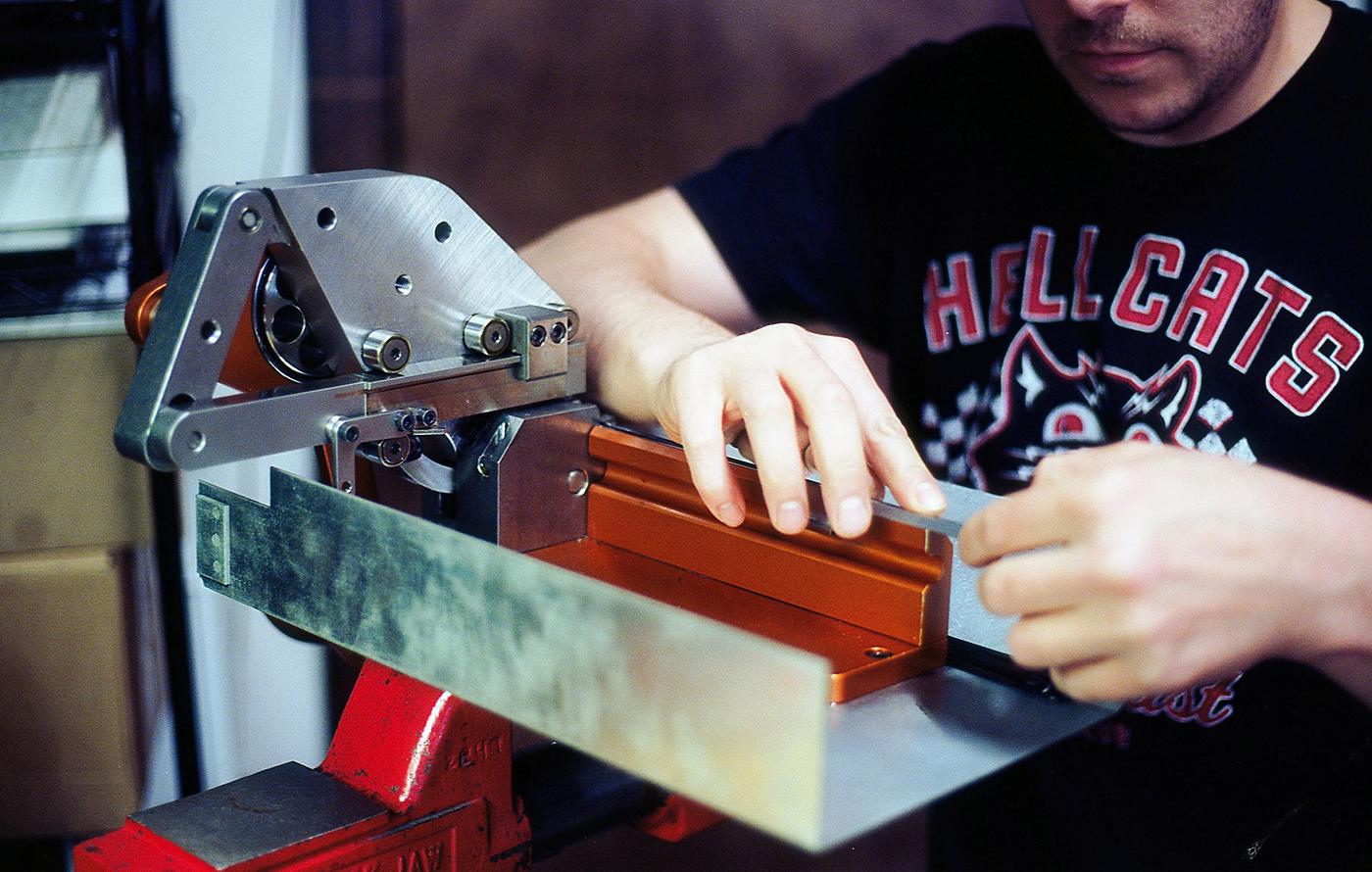 Thomas, who I can best describe as being a somewhat sturdy, big brother type of person has been turning out wheel builds at a rate that leads me to believe he could do it with his eyes closed. I want to ask him to arm wrestle for some reason. I don’t know why, I just do. I imagine I would lose easily.

I’ve had too many cups of coffee again. I am beginning to sweat while standing still. 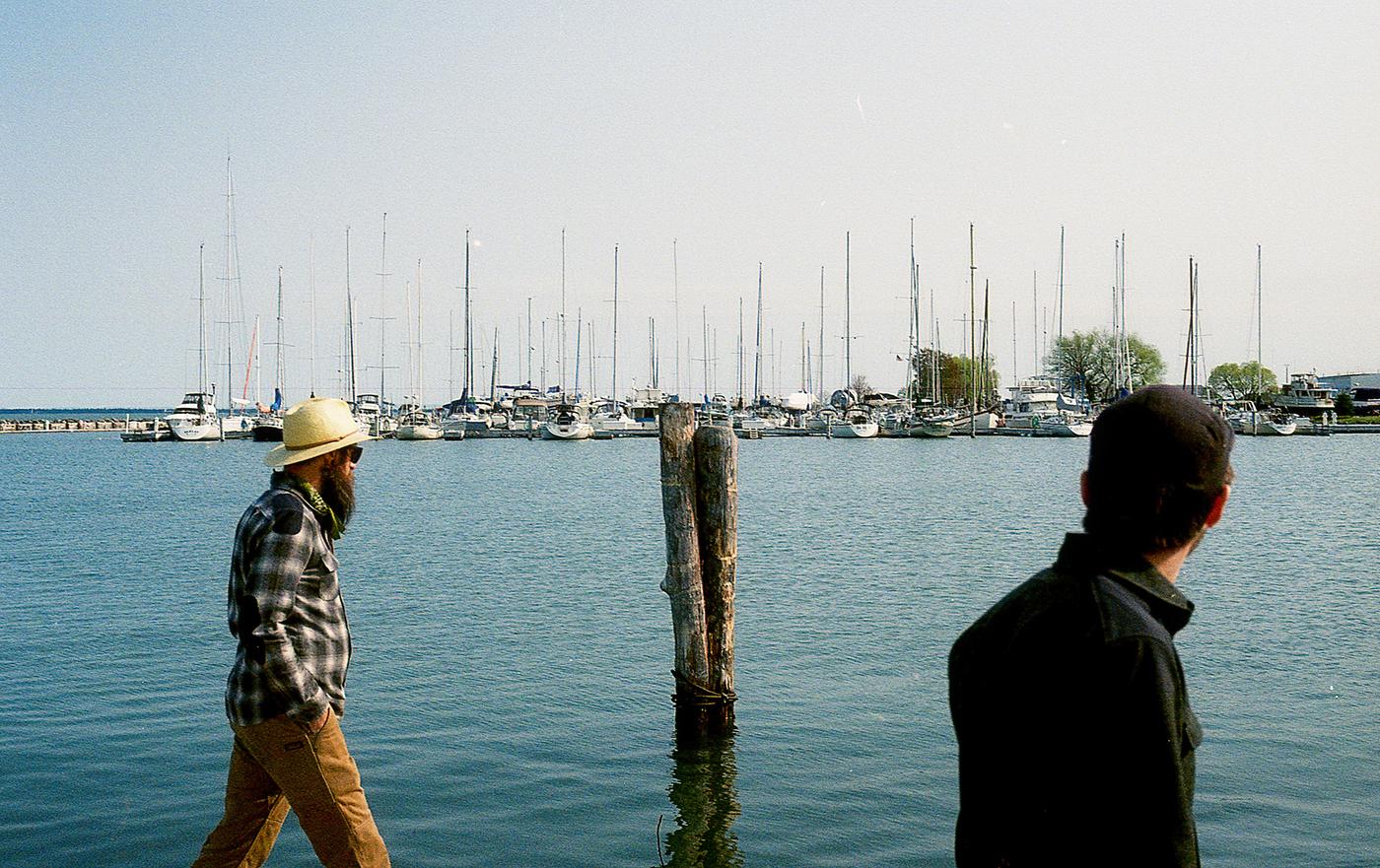 6/1/2019 – It is my fifth day here in the North. Josh and I are in Duluth, a city snuggled up against the point of Lake Superior’s large finger. Today is the first of June and the temperature is only in the 50s. Weakened and dusty from a spin through the area’s beautifully scenic singletrack, we make our way to Bent Paddle Brewing. The brewery is located in a large warehouse filled with the juxtaposed smells of yeast and industrial cleaner. We find two seats on the back deck beneath a series of bridges stacked on top of one another like some giant concrete birthday cake. I slowly sip my IPA. The cold air off the lake whirls around me before darting into the neon-green treetops. Spring seems to have just started here on the South Shore and I regret leaving all my jackets back home in North Carolina where it is 97 degrees. 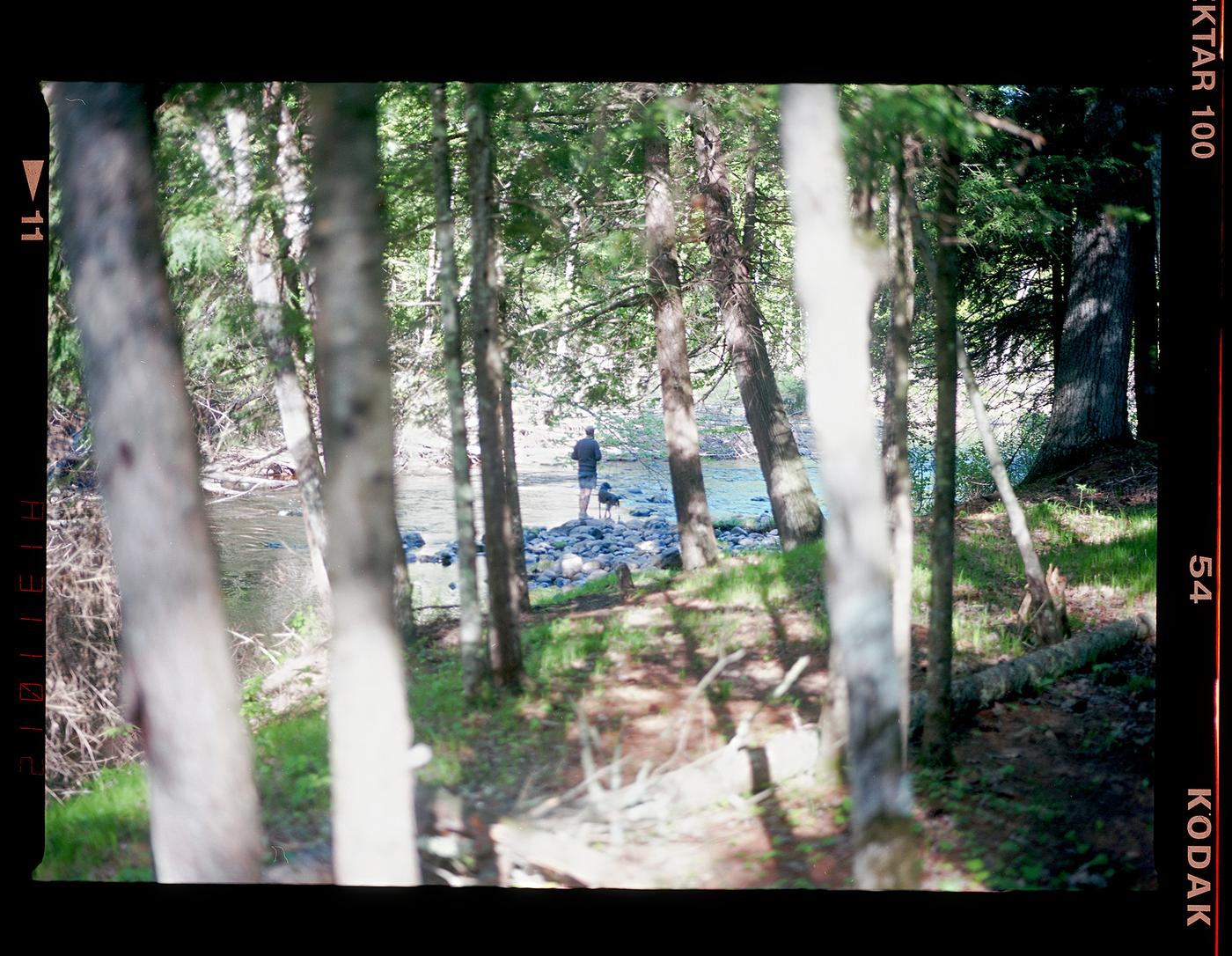 It is quiet. Like, really quiet. Josh and I sit in near silence, and apart from the constant thumb flicking of us scrolling through our phones, there is no real sound or movement from either of us. Imagine your two most introverted friends hanging out with one another. Now imagine that neither one of them knows the other all that well and are on a 5-hour road trip to middle-of-nowhere Wisconsin. I begin to internally panic. “I hope this is going well for him,” I think to myself. To say that Josh is a man of few words is an understatement. Just before I desperately make another attempt at conversation, he breaks his silence and looks up, peering through the shade of his large white hat. His eyes scan across the sky, landing upon the sun. Squinty-eyed and with a sudden sense of purpose, he declares “Alright, finish up! It’s getting late and this day is just too perfect. Plus I need to catch a fish for dinner!” We make for the cabin. 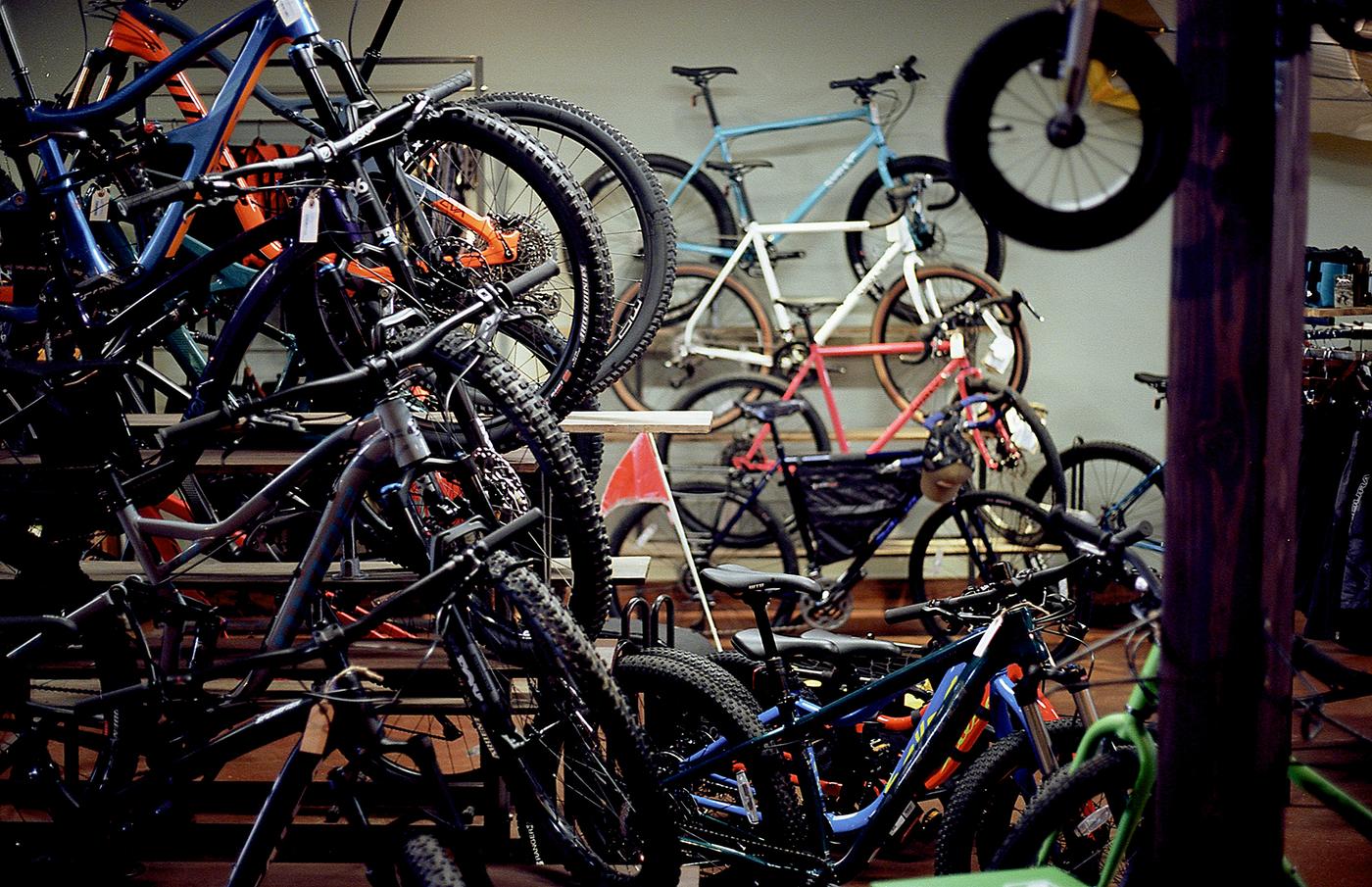 6/4/2019 – Back in the city and back in the shop. The Angry Cabin and the surrounding area is truly amazing. There’s just endless wilderness with the occasional dive bar or diner with those little melty pillows of deep fried rapture they call cheese curds. It’s paradise.

Thomas and Megan had their second child while we were away. I’m worried that I won’t see them before I leave, so congratulations, y’all!. I am glad we shared a beer on the stoop behind the shop before we left town. But since Thomas is out, we are extremely busy! Josh jokingly asked me if I’d like to stay a while longer. I considered it. 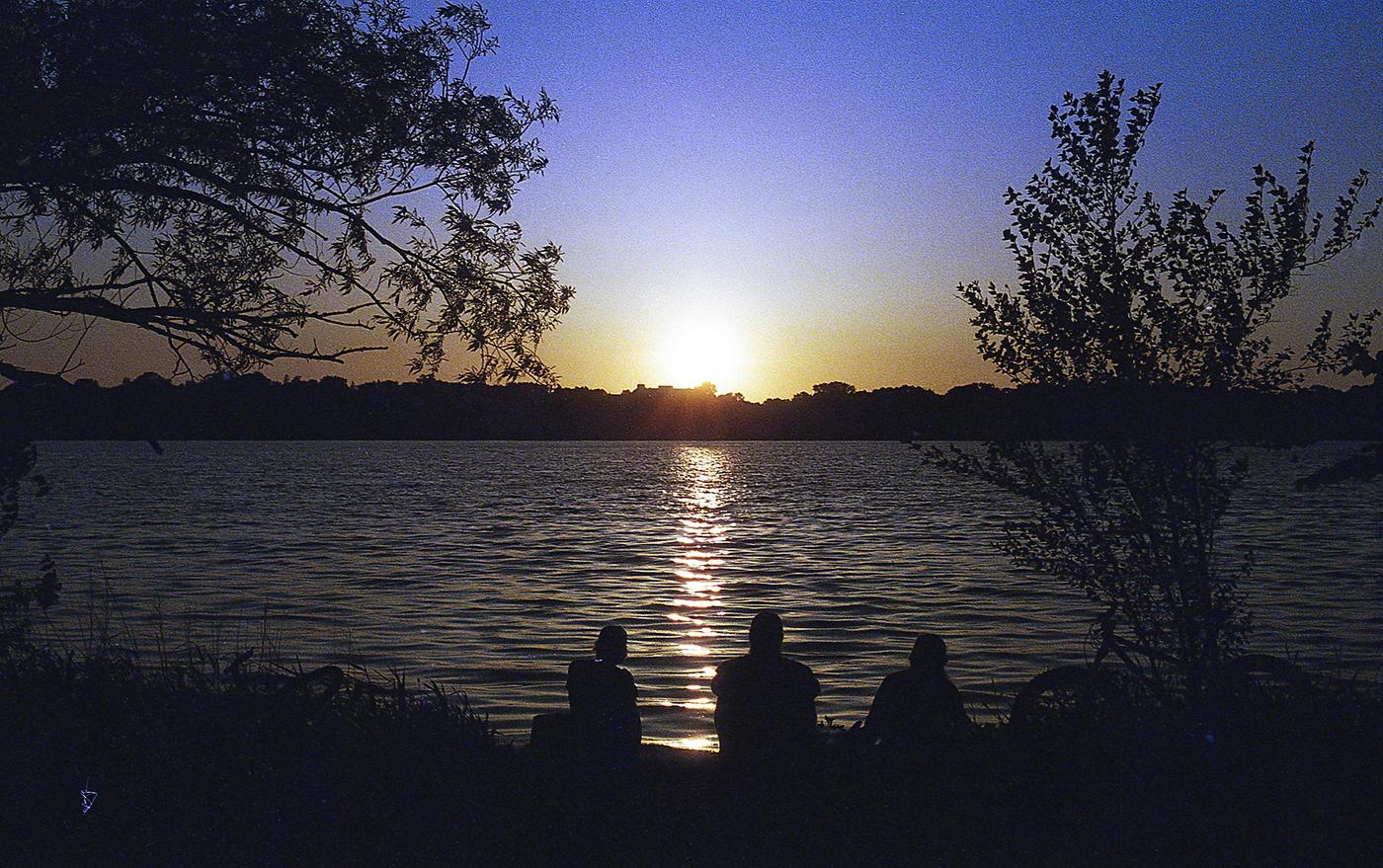 6/5/2019 – Rode around with some friends from Surly tonight. We stopped and watched the sunset at the edge of a lake. I wish I knew which one, but there are so many here I can’t keep track. A fish swam by, leaped out of the water and crashed back down right in front of us. The ripples from the splash caused the reflection of the dwindling sun to dance in front of us like some cartoonish campfire. Aaron and Amy suggested I should stay longer and maybe move here. That’s twice now.

A different fish, or maybe it was the same one, jumped out of the water in front of us again. This time close enough I could reach into the water and grab it. 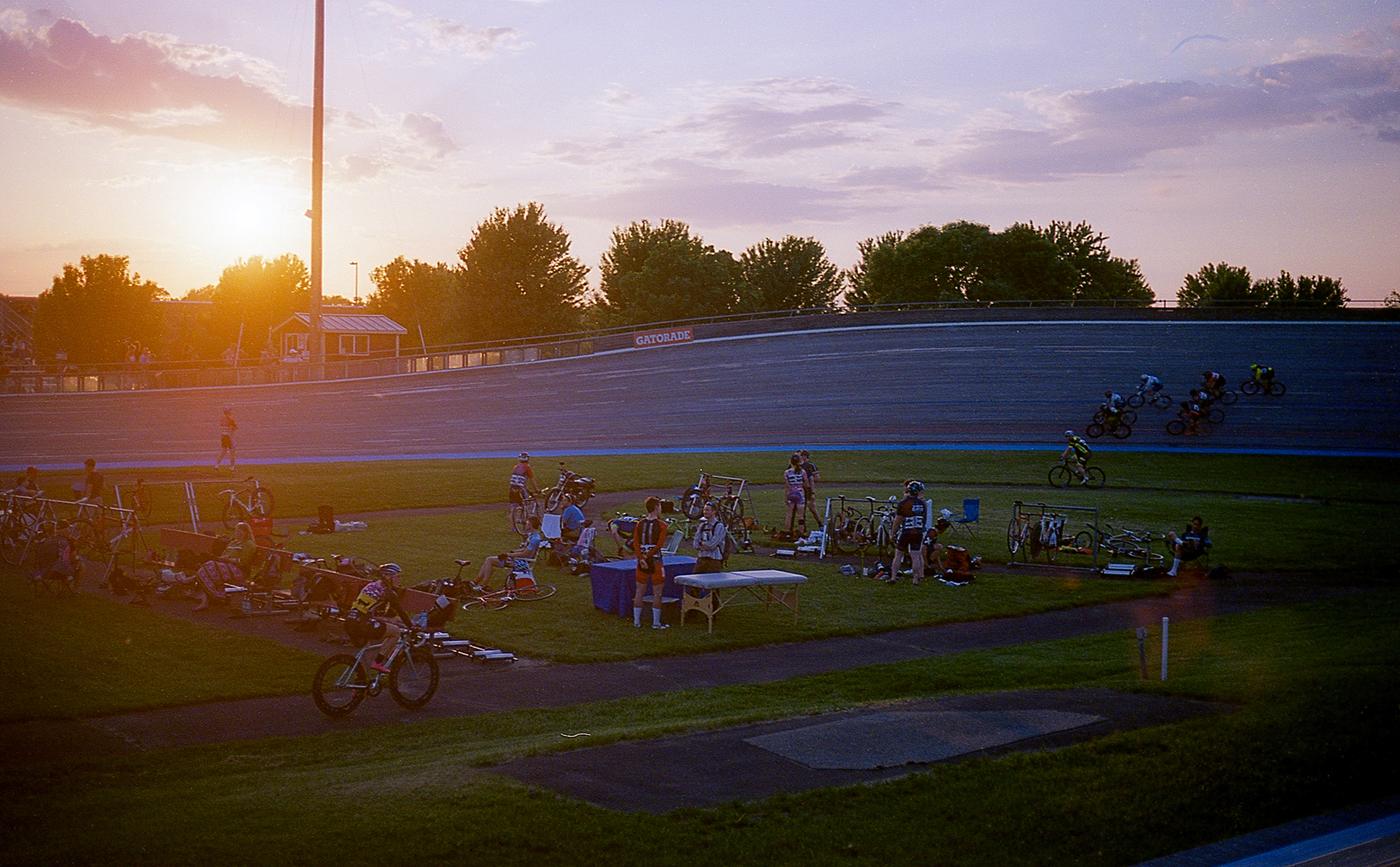 6/6/2019 – It’s my last night in town. Amy and I decided to make the trip to the velodrome which is roughly about 45 minutes north of the Twin Cities. It was important to me that we go since it was the last summer of racing before the track gets torn down.

I’ll be sleeping tonight with the rumbling sound of riders passing by repeating in my head. 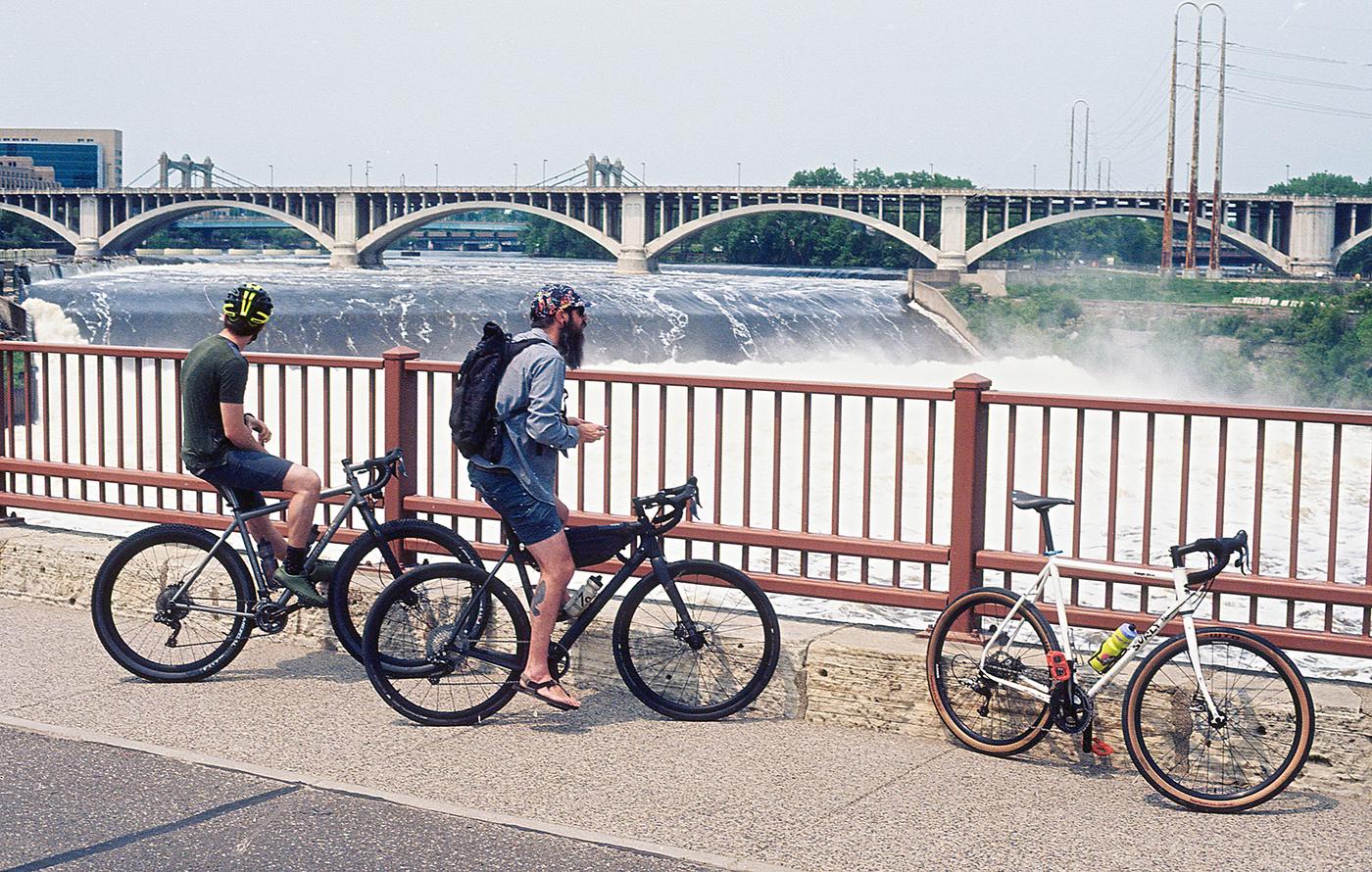 The community here is so open, supportive, diverse, and welcoming to outsiders. I sort of knew this before coming here, but I think I appreciate it a lot more now than I ever could from attending a QBP event. There’s a commonly used phrase in this part of the world, “Minnesota nice.” As I understand it, it means that Minnesotans are nice, but only to your face. In my experience, however, this is far from the truth. All I feel now is warmth, even if it is still cool enough to be wearing a jacket in June.

So Minneapolis, in the immortal words of Prince, “I would die 4 u.”