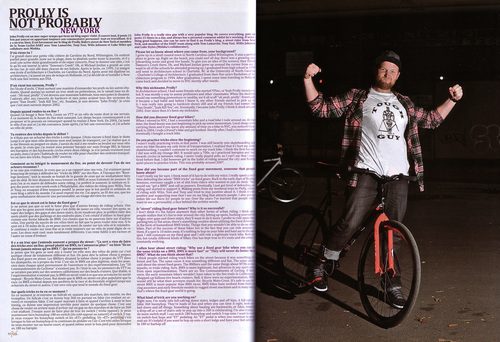 So let me preface this by saying my scanner sucks. I tried so many times to get the entire page to scan correctly and the only way I would be able to get it to scan completely is to take the magazine apart, which I won’t do. If you wanna read the first page of the article, click the above image for a higher-resolution with some edge bleeds.

As I mentioned earlier, I got my copies of Fixé Issue 3 in the mail yesterday. One feature in the magazine is an interview they set up with me a little while ago. A lot of it is probably old news to you guys, but there’s some other information in there that you might not know. Be aware there are a few minor mistakes (such as I graduated college in 2004, not 1994), but overall, I’m really stoked and honored to be a part of the magazine. You should really try to pick a copy up. Their US stockists are:

Roll through one of those shops if they’re in your area and once again, thanks guys!