Things don’t always go as planned. I awoke after our Central Highlands ride with what I can only describe as the worst allergies I’ve ever experienced. Or as the locals say, “pissa hay feva’ mate!” Turns out, a rather wet winter, followed by a series of storms brought on a serious amount of allergen-related illness this summer in Australia, so I didn’t feel so bad, at least not socially anyway. Still, I had a bloody job to do. We had an agenda and I was sticking to it. For the most part anyway. After all, I’ve been wanting to travel to Tassie for years to ride bikes and I was finally here… 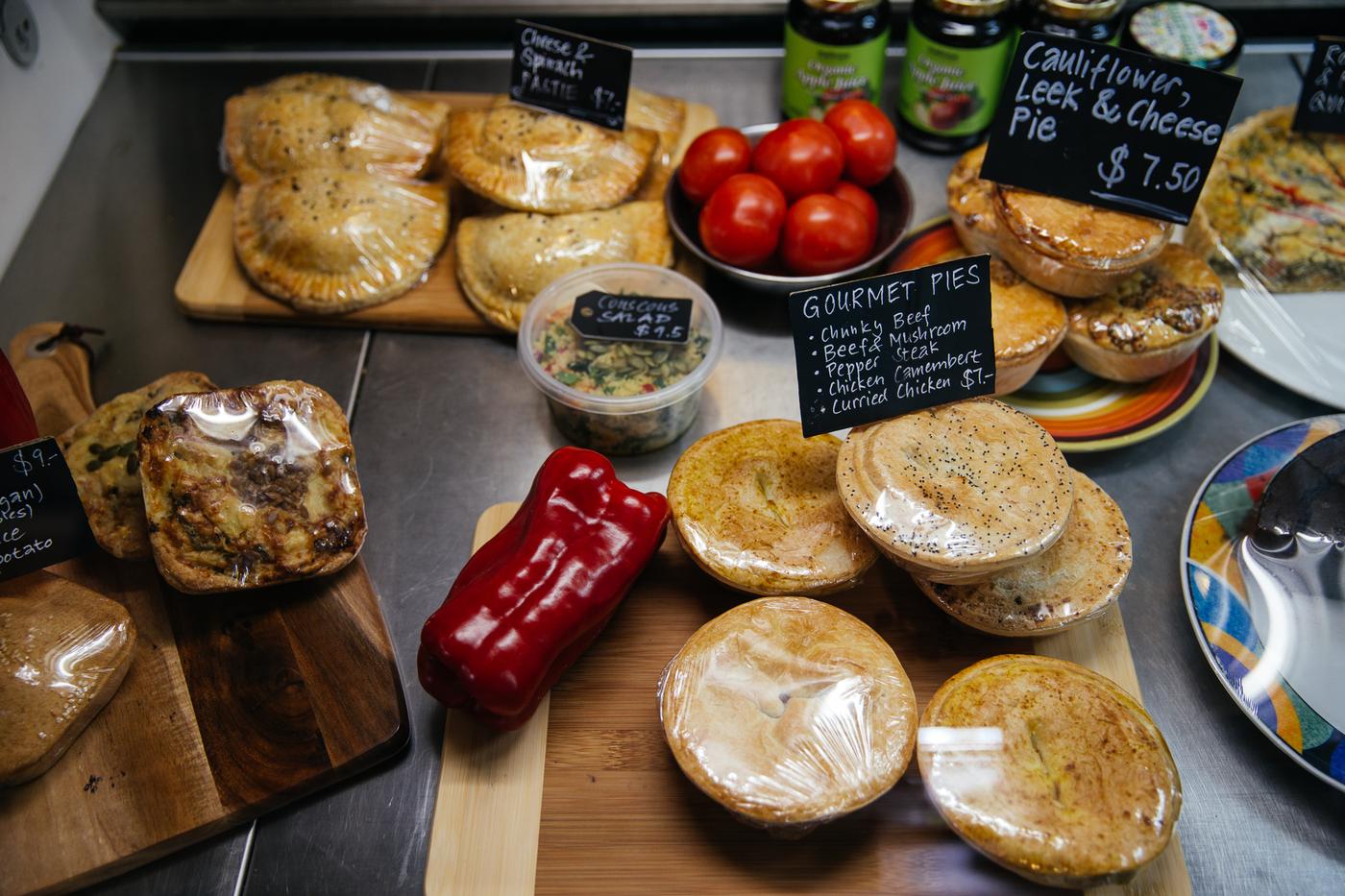 The original plan was to wake up at the crack of dawn, head to St. Mary’s for brekkie (breakfast) at the Purple Possum Cafe and ride to the Freycinet National Park for a night of bicycle camping. We’d then spend some time sight-seeing and exploring the 4×4 roads before camping at the cliffside Whitewater Walls bush camp. Then, we’d pedal back to our Ute, or truck, in the morning after eating brekkie again on the peninsula at one of the locales along the way. The trip would total around 120 miles and 6,000′ elevation. Or around 200k and 2,000m.

As previously mentioned, the hay fever, late start and generally shit weather prompted us to truncate our morning, allowing me a bit of time to recover and the rain to subside. Unfortunately, that meant the ride was consequently shortened. Bummer if you’re a kilometer counter, not so much if you’re a nature lover. 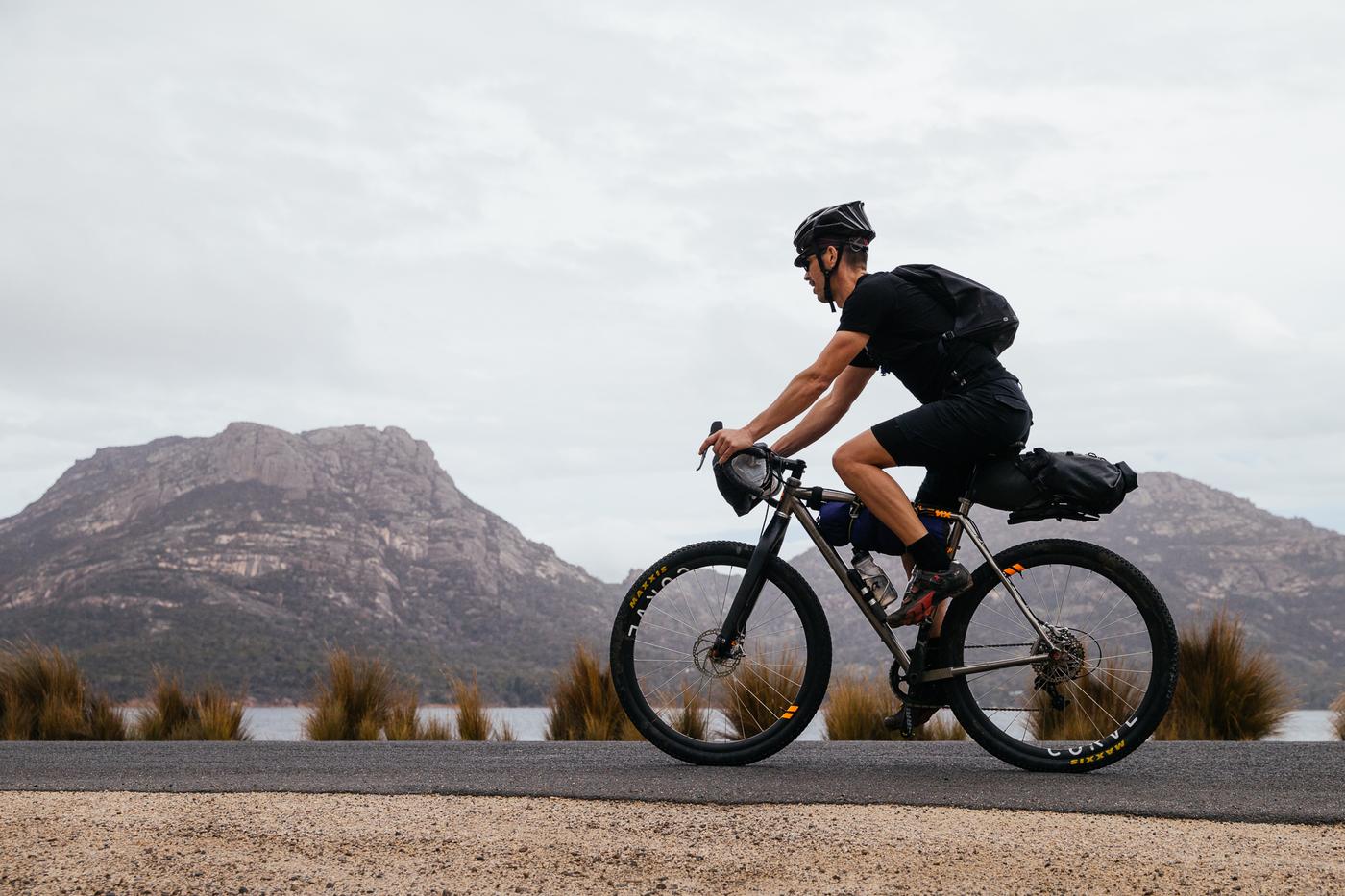 Before we get started here, let me just preface all this by saying, Scott, my riding mate for this trip, had never bicycle camped before. In fact, he had never really ridden a fat tire drop bar bike before. A well-seasoned roadie and mountain biker, he hadn’t really explored a lot of the Tassie backcountry by bicycle, at least not with a night’s worth of gear strapped to his bike. This was his first S24 camping trip and I was stoked! For my 44 Bikes rig and me, this is what we had been waiting for. Fully-loaded touring is one of my favorite experiences on a bicycle. It requires planning in terms of packing in what you need, all while allowing for more times to explore and take photos. In a land like Tasmania, you can never have too much time to explore. Still not feeling 100%, and under the influence of whatever codeine-dosed drugs I got at the local chemist, I packed up my bike in a car park off the side of the Tasman Highway, while offering Scott a few pointers before heading out for lunch. Our route took us right past the Freycinet Marine Farm for oysters, mussels and some freshly-caught fish. An ideal spot to fuel up before what would be a cold and windy afternoon on fully-loaded bikes. The weather had certainly taken a turn for the worse in a rather short amount of time. My Suunto watch warned of oncoming storms and my iPhone’s weather app claimed it’d be a wet evening. Not wanting to sour the experience, I ignored all signs and pedaled onward. Our camp was at the end of a sandy and steep 4×4 track above Bluestone Bay. Scott had car camped there as a youth and reckoned it’d be a perfect home base for some afternoon exploration. Once we dropped off our bags, we headed back into the dirt tracks in search of wildlife and vistas to the Tasman Sea. Towards nightfall, we returned to camp and turned in for the evening, fingers crossed the following morning would bring more of the Tassie sun I had experienced previously in the week. No such luck. I’ve experienced rain before, but few times like this. Buckets of water pelted my tent all evening, soaking everything else that didn’t make the cut for the dry interior of my cliffside villa. With the rain came cold winds blowing off the coastline and straight to my bones. We hadn’t planned for that kind of weather. Hastily, we packed our camp, loaded our bikes and sprinted for the nearest refuge: the Freycinet Lodge. After the previous night’s accommodations, and given the current state of ourselves (soaking wet,) we felt a bit out of our element in such nice accomodations. Still, who could resist a warm cup of coffee and brekkie before the pedal back to our Ute. With the wind at our backs, we made it to the warm confines of our auto and drove north to the Bay of Fires, where a whole ‘nother leg of our trip awaited. With most of our gear still wet and the previous evening’s matters still a bit of a blur, we awakened to sunny skies and a warm welcome from our hosts at the Bay of Fires Bush Retreat, Tom, and Ana. Not wanting to meddle about too much, we made coffee, brekkie and assembled our gear for a ride down to the Bay of Fires and through the Doctor’s Peak Forest Preserve. 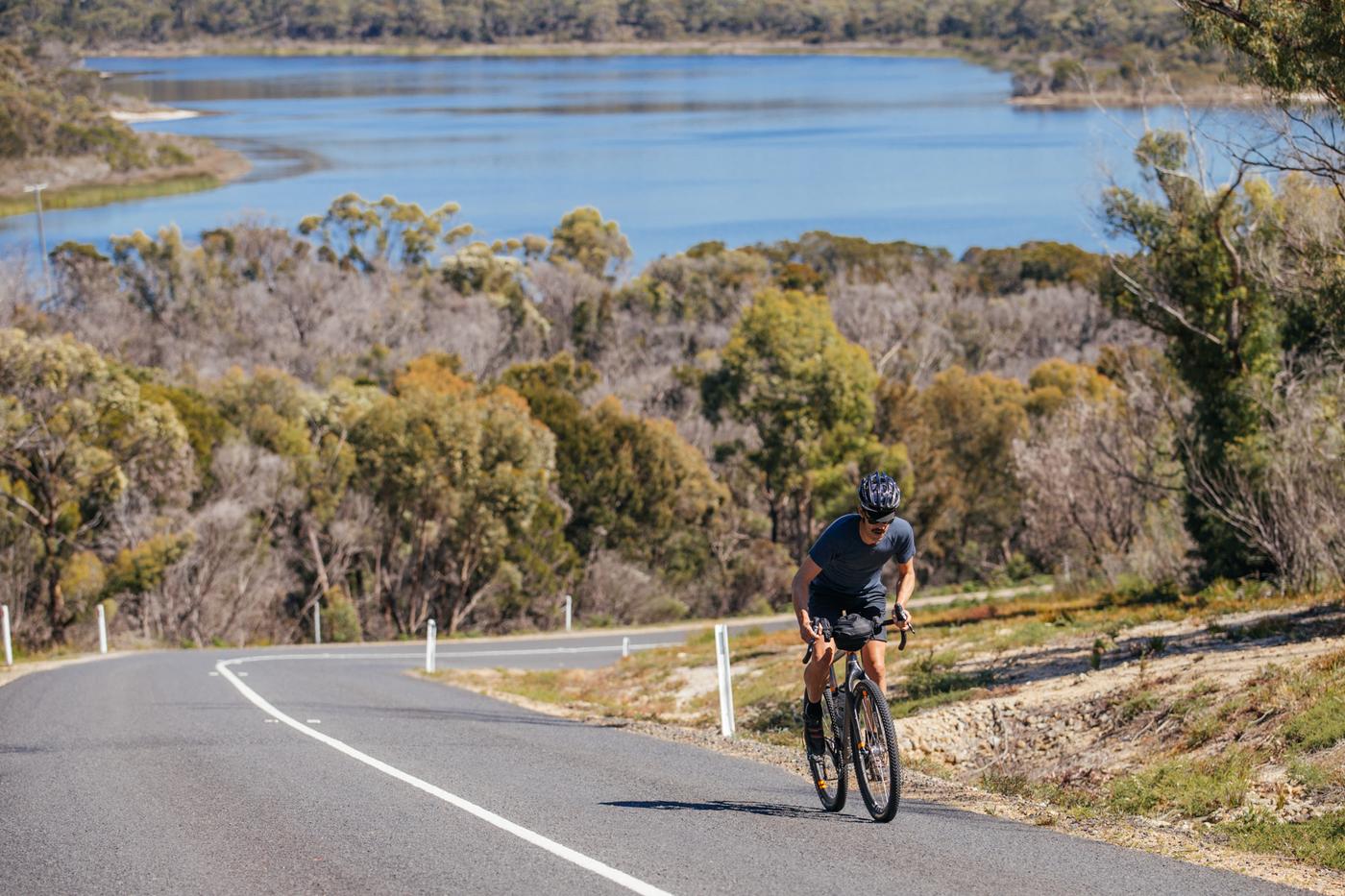 It’d be a short loop, with heaps of photo ops, and a perfect way to stretch the legs out before we’d spend some quality time with our hosts and their guests later that evening. The ride totaled only around 30 miles with 2,000′ of elevation but provided excessive amounts of beautiful vignettes to the Tassie coastline. Knackered at the knees and keen to have a rest, we returned to the Bush Retreat to find some extra special surprises awaiting us…

Many, many, many thanks to Tourism Eastern Tasmania for funding this jaunt, Scott for organizing everything and all the people who helped us out along the way! There’s more to come this week, so stay tuned!