One year and a week ago, a vehicle’s faulty catalytic converter ignited roadside vegetation igniting a blaze that would consume 96,901 acres of Sierra and Sequoia National Forest, eventually closing Yosemite for the first time in the National Park’s history. This was the first “big” fire of the indomitable 2018 fire season that torched the Western U.S. and serving as an unwelcome backdrop to this 12-minute major motion picture. The concept of what you are about to watch was to be a trip captured and enjoyed entirely screen-free. We even went the extra step of enforcing a no disc brake rule to ensure artistic vision and integrity. Screen-free and distraction-free, in the moment, disconnect to reconnect. For someone like myself, who’s primary identity exists on a cell phone app; this aspect was of acute personal importance. How to balance technology and the tangible is the North Star in modern world navigation for many of us.

In keeping with the analog theme, the media of choice: thirty-two custom 100+ degree pannier & basket baked Kodak Super 8 cartridges. This unavoidable scenario artistically played in our favor, as the smoky summer feels were environmentally enhanced. The stills in the gallery and book were shot by the crew n’ cast on Kodak 35mm and 120 film. Paper maps for navigation, and a compass “just for looks” if we’d thought of that. Spoiler Alert: We were successful in skirting the fire with a reroute south of Yosemite, but this didn’t mean escaping the hazy smoke. Gone were the spanning vistas I had envisioned when conceptualizing this film with my credit card; in their place; bittersweet realization and disposition.

These imaginative shrines that grace our home with their symphony; are we the last generations to stand in awe of their magnificence? It’s not as inspiring to look up and implode with the statistics, as it is to look up at a 3000-year-old Sequoia and explode with reverence. But, we all have our ways of coping with action/inaction. 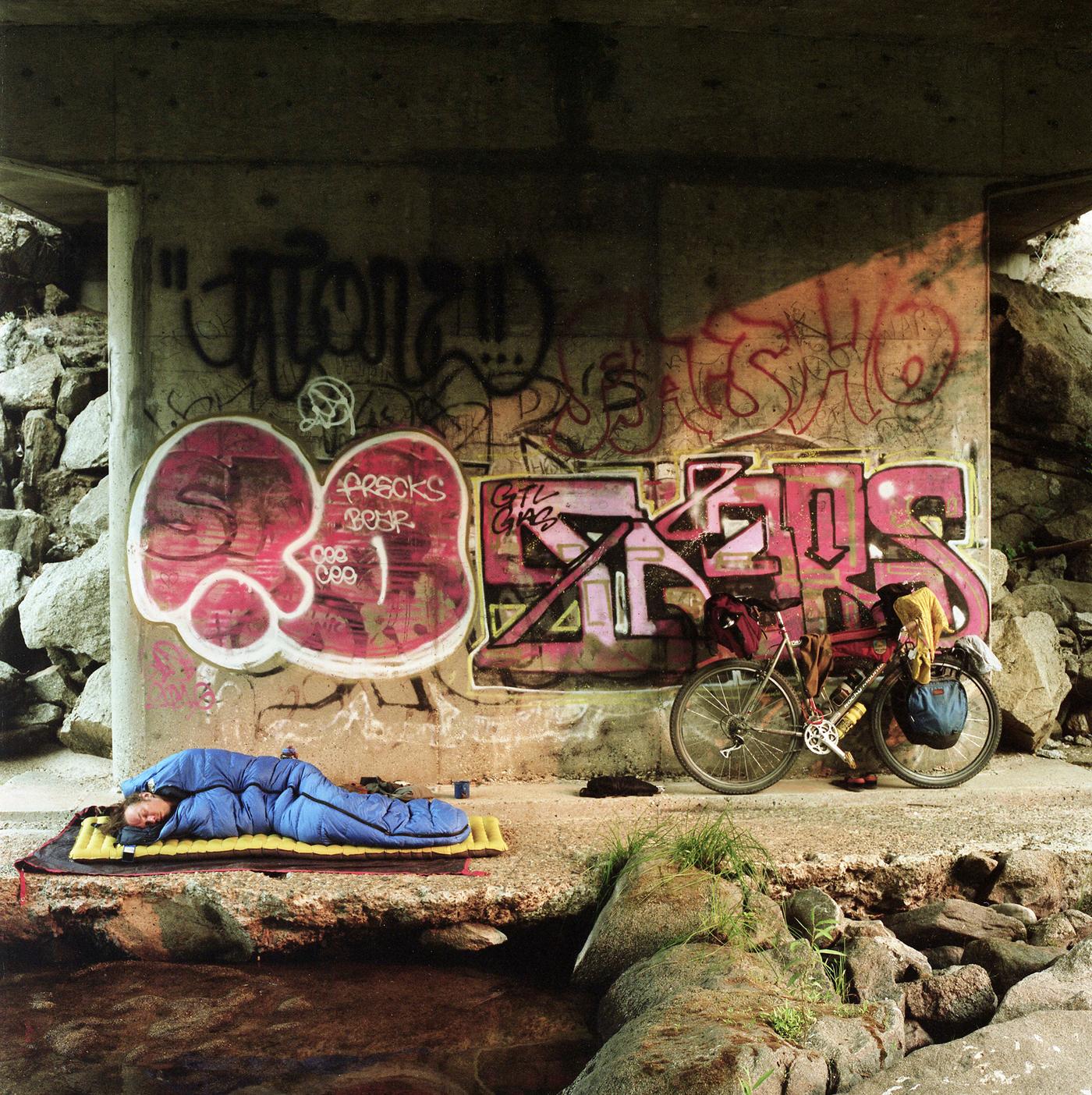 Working with ALL film on this project was mechanically thrilling, and very unobtrusive. The flow of the ride was never interrupted by “hey can you do that one more time?”, or “hey wait, I meant to boomerang that!”. You either got the shot or you didn’t – you’ll know in a few months. The compact and fun looking Super 8 camera (thanks Joe Rich!) never made you feel like a subject as it charmingly click clipped away at 18-24 frames per seconds while you did your thing, in this case smoking an oz of lofty greens (thanks Old Pal!), swimming, riding, tanning, stuntin’, and heavy hanging.

Holistically, this was a multifaceted creative endeavor involving the touches and sounds of several Austin, TX area artists. Those include Karen Skloss: editing. John Wesley Coleman: music. Eric Friend: sound design. L A N D : titles and logos. Sandy Carson: Director of Photography. Ronnie Romance jr: I lived in Austin for 8 years, hence my curly mustache. Best of all, Sandy and I got to make the bike touring movie WE wanted to make, and I hope the authenticity of that comes through in the finished product. We had a blast showing this all over the US, and several shops/bars in Europe and the UK. Always a good excuse to have a bike party, and as a bike culture attaché, I enjoyed all of the wonderful hospitality we were shown by local bike communities along the way.

I really can’t thank the sponsors of this film enough. Without them, I’d have to get more credit cards. These companies, without hesitation, gave big bucks outa their small budgets to a film project that is essentially anti-advertising. Support them whenever, or however you can. There are still a few photo books for sale from my store Ronsbikes.com.

See our route at Ride with GPS.