Beau and His Surly ECR

Bicycle tourists are some of my favorite subjects to document. Especially ones that ride by their own rules. When a fella named Beau Walters dropped me a line on Instagram on Sunday, asking if I was free to meet up in Santa Fe as it was on his touring route from Boulder to Mexico City, I naturally obliged. Little did I know what I was getting myself into! 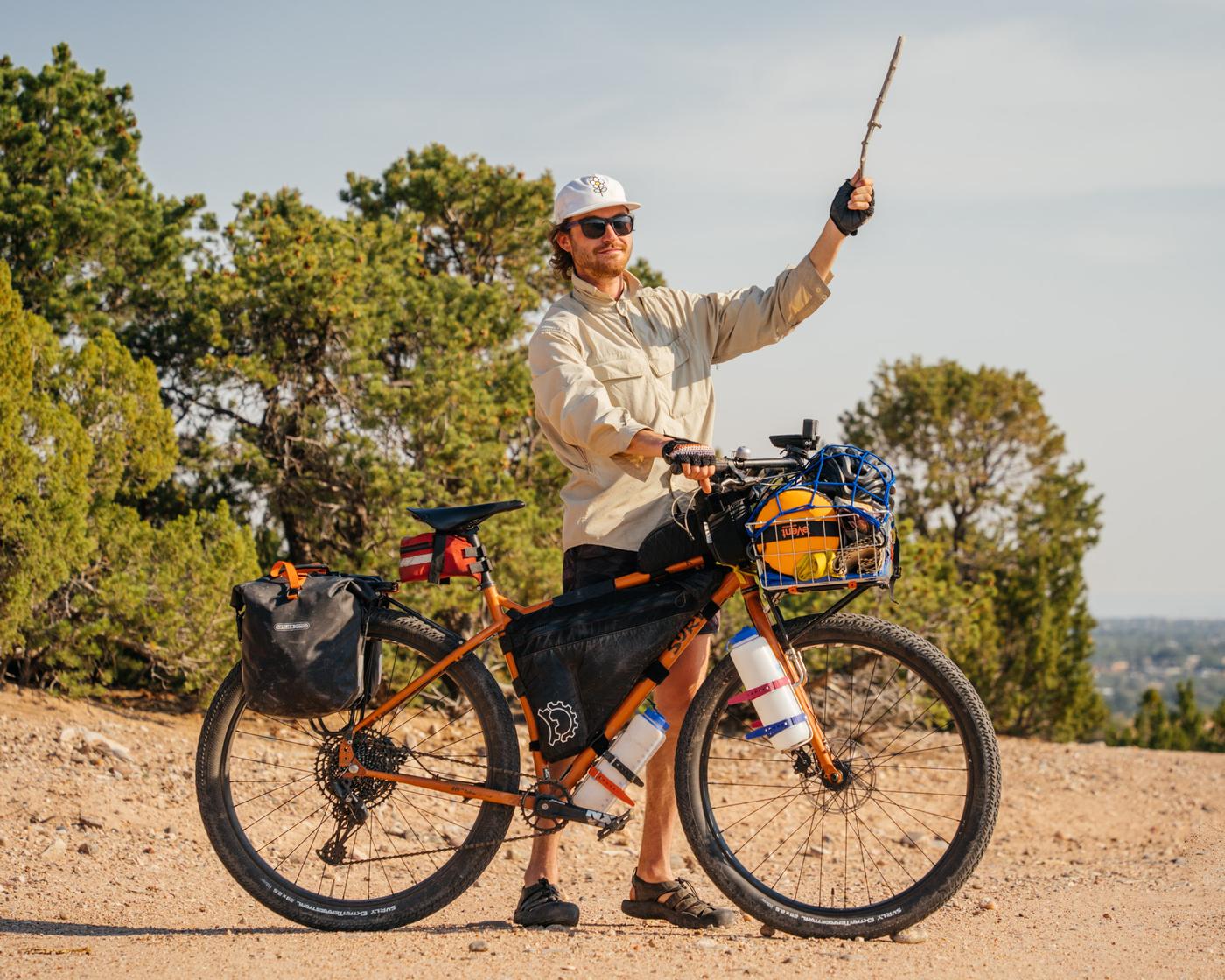 If you’re crazy enough to ride through one of the hottest deserts in North America, in the middle of summer, then I want to meet you. Everything about this ride seemed not only dangerous but very ill-planned, yet within a few minutes, I realized flying by the seat of his pants is what Beau is all about. For instance, his first bicycle tour ever was from San Luis Obispo to Vancouver, along the Pacific Coast Highway. Immediately, I asked “how was the wind?”, to which Beau replied, “miserable.” This anecdote is perfect though because Beau still had an exceptional tour, he just did things a little differently. For those unaware, typically, tradewinds along the Western Seaboard go from north to south, and the road along the coast has very little shoulder heading north, aaaaaand the view to the ocean, seashore, or other attractions is blocked by the southbound guardrail and road. So, if you ride south to north, you’ve got a headwind to deal with and you’ve got to cross over a relatively busy tourism corridor to stop and smell the ocean air. It’s not ideal but ya know what? It’s really not a big deal. 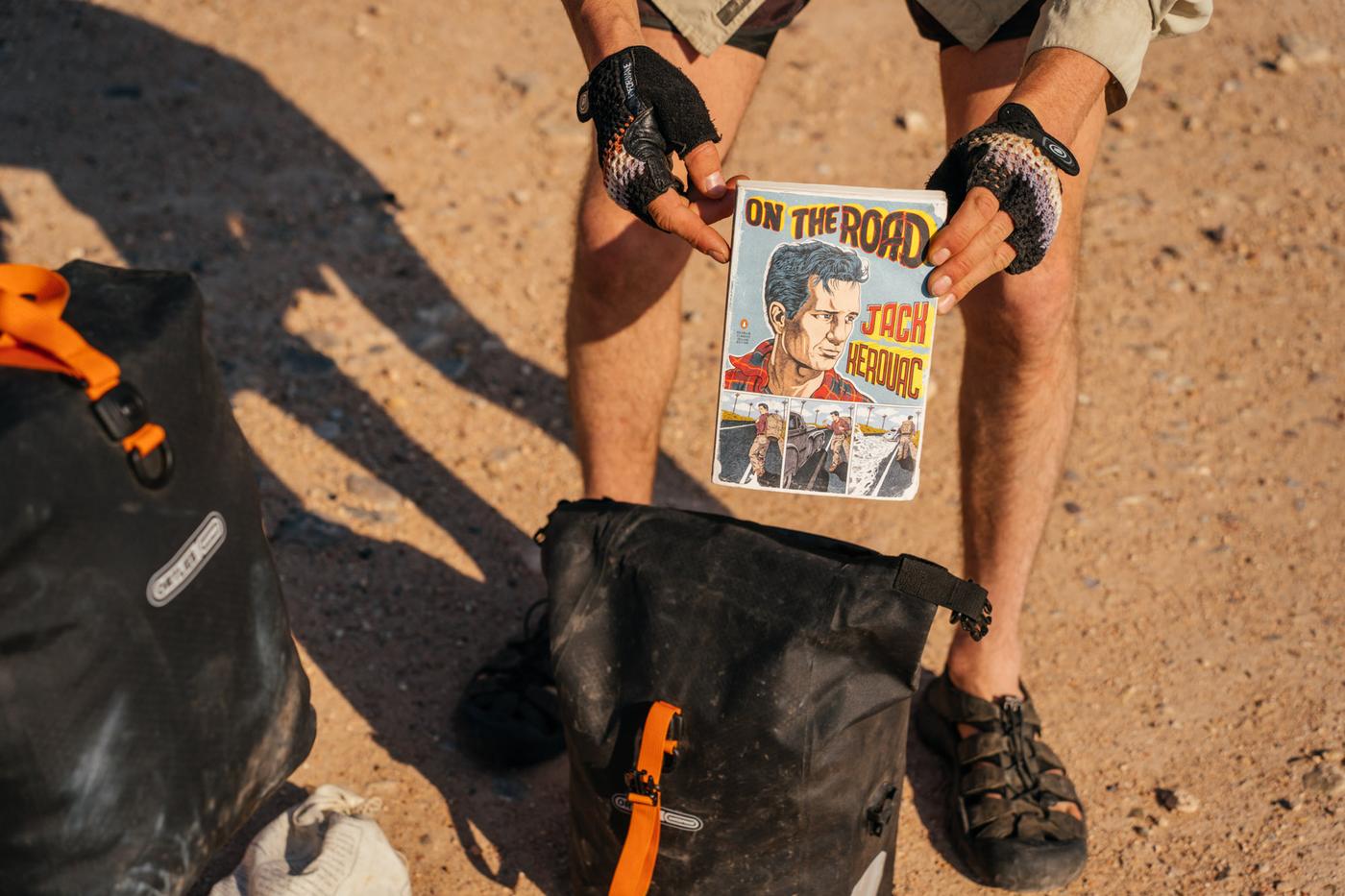 That’s what drew me into Beau’s personality immediately. He has no route in mind, yet he is prepared for everything. His preference is to talk to locals about what lies ahead and hopefully gain some reconnaissance along the way. Going south from Santa Fe drops you off the Colorado Plateau and with this descent, comes the real heat. Santa Fe is usually about 20º cooler than Albuquerque in the Summer months and I knew as I was shooting these photos and talking to Beau that he was in for quite a journey… 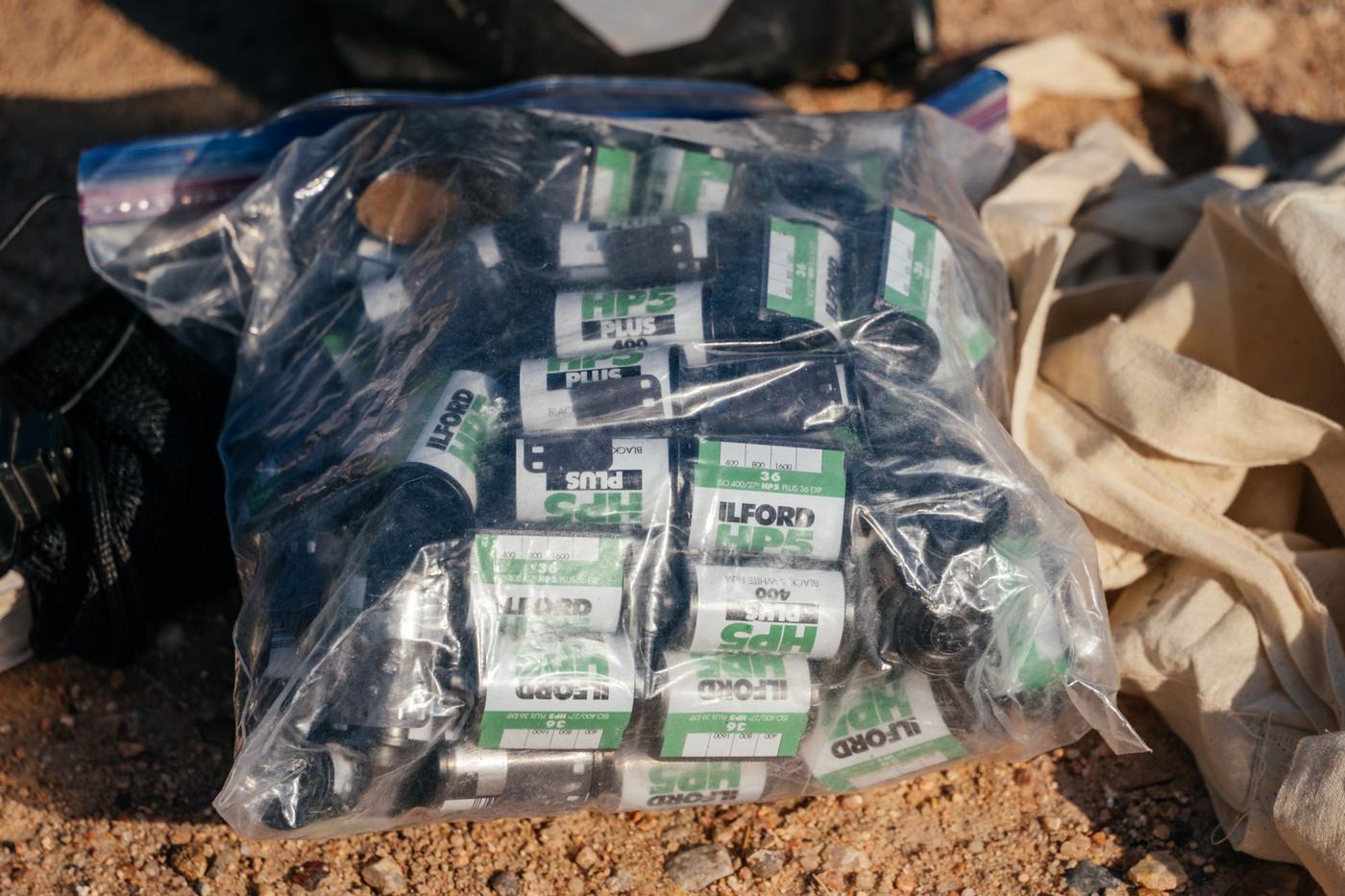 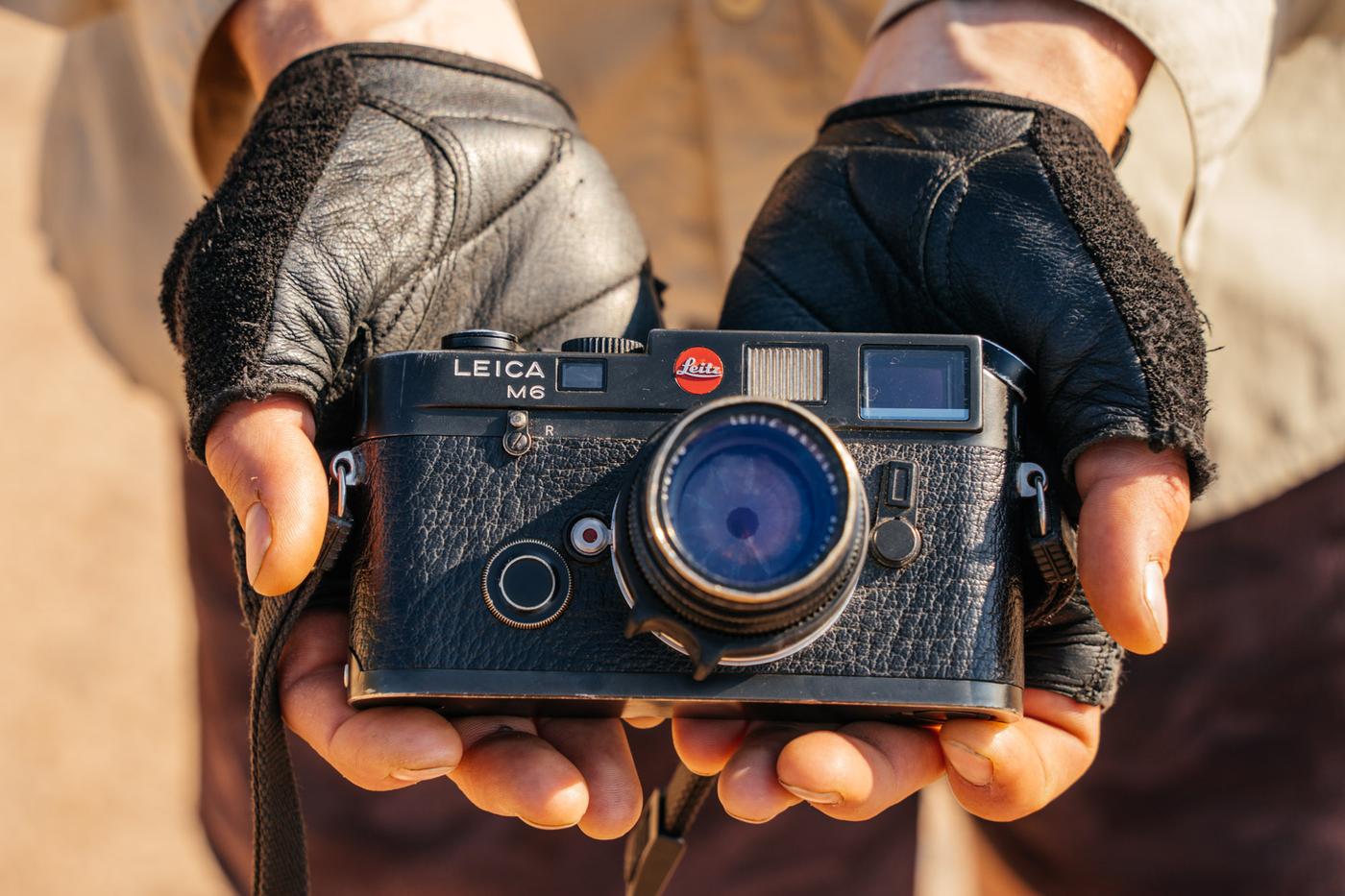 Luckily, he’s got plenty of water, the right gear, and 95 rolls of Ilford HP5 black and white film, accompanied by a point-and-shoot 35mm camera and his beloved Leica M6. 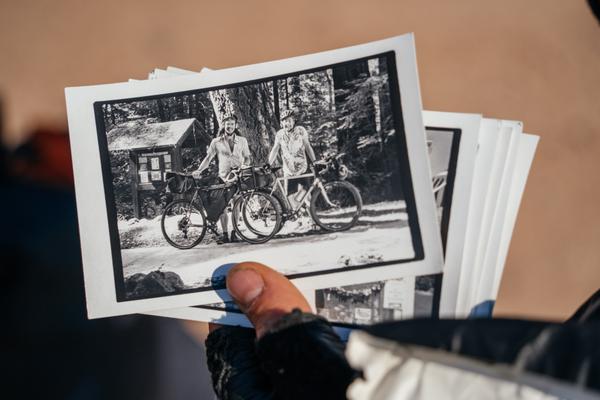 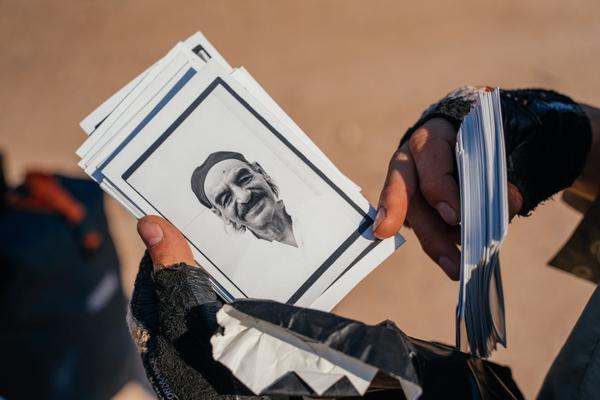 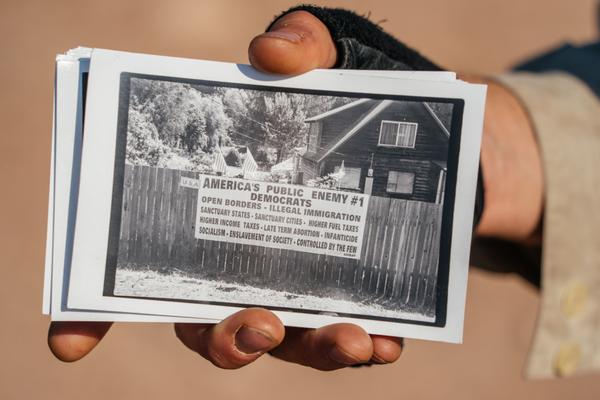 Here’s where it gets interesting:

Beau is a believer that simply scanning 35mm negatives and posting them online does the medium a disservice, for it’s the process of darkroom printing that truly brings life to the image. To live by this mantra, he’s bringing along a hundred or so darkroom print postcards on Kodak paper and is offering them via his Instagram account on a donation basis.

All you’ve gotta do is message him your address, send him whatever you can afford to his Venmo @userbeau and he’ll send you a random postcard from his first bike tour – SLO to Vancouver – by dropping them in postal boxes at a random point along his route. Neat! 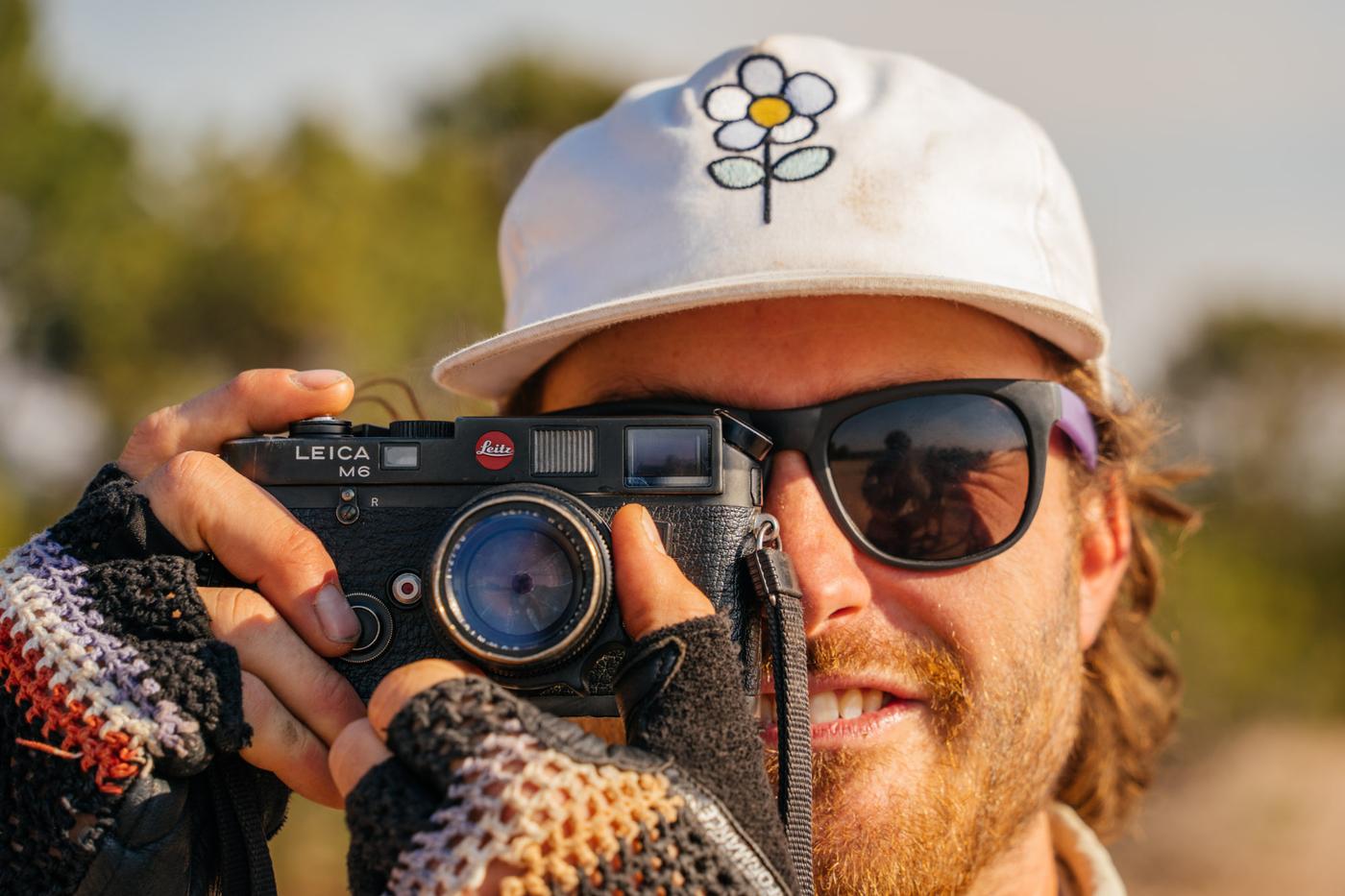 Beau’s plan is to shoot all his film on this trip, which will take him a few months to complete. The biggest challenge will be from the Mexico border, through the Sonoran Desert and into the highlands into Mexico City. As the title of this piece – Bike Touring is About the Oasis – implies, Beau will be actively looking for those shady spots along the road where he can rest and sleep through the heat of the day. I joked to Beau to become a desert creature, i.e. nocturnal, while avoiding the perils of riding on the roads in Mexico at night. 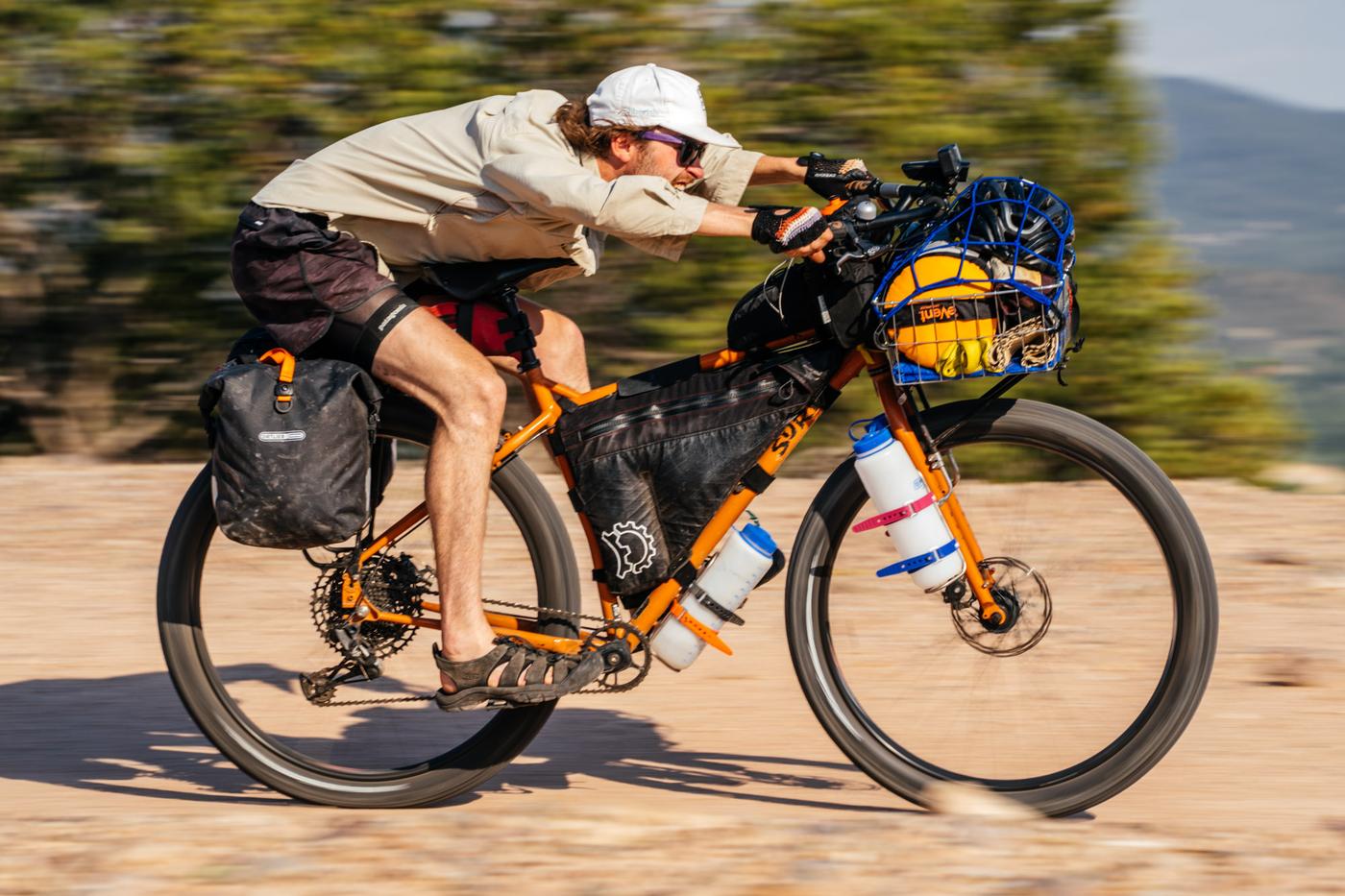 If you happen to see him along the way, say hey, offer him some water, and maybe barter with him for a print.

This is true to form radical atavism at work here. Safe travels, Beau and I hope you find your oasis each day.