I have written, deleted, and rewritten this article several times now. There was the version that leaned in hard to trying to be funny, the version that tried too hard to be philosophical and deep, the version that was a cut and dry day by day account of the trip, and finally this one – some words written less about the trip itself and more about why I am so thankful we approached it the way that we did.

This past fall, my very good friend Kevin and I shipped ourselves and our bikes halfway across the country to New Mexico for what was essentially a repeat of the same trip we’d done 3.5 years prior. Back in spring 2018, with our Tony, we went on a very similar New Mexican grand adventure. We had ridden a serpentine route from Las Cruces in the south – through Truth or Consequences, Magdelena, Mt. Withington, Magdalena, Moriarty, and all of the salty stream crossings, scrublands, savannas, forests, mountains, and mesas in between, to Santa Fe in the north. Now, Kevin and I were repeating the journey – only this time going from north to south in the fall instead of south to north in the spring. With Covid-19 vaccines in arms, three local DC area airports, and the world at our fingertips it did seem like a lot of trouble to repeat our last big trip with only minor variations on a theme. 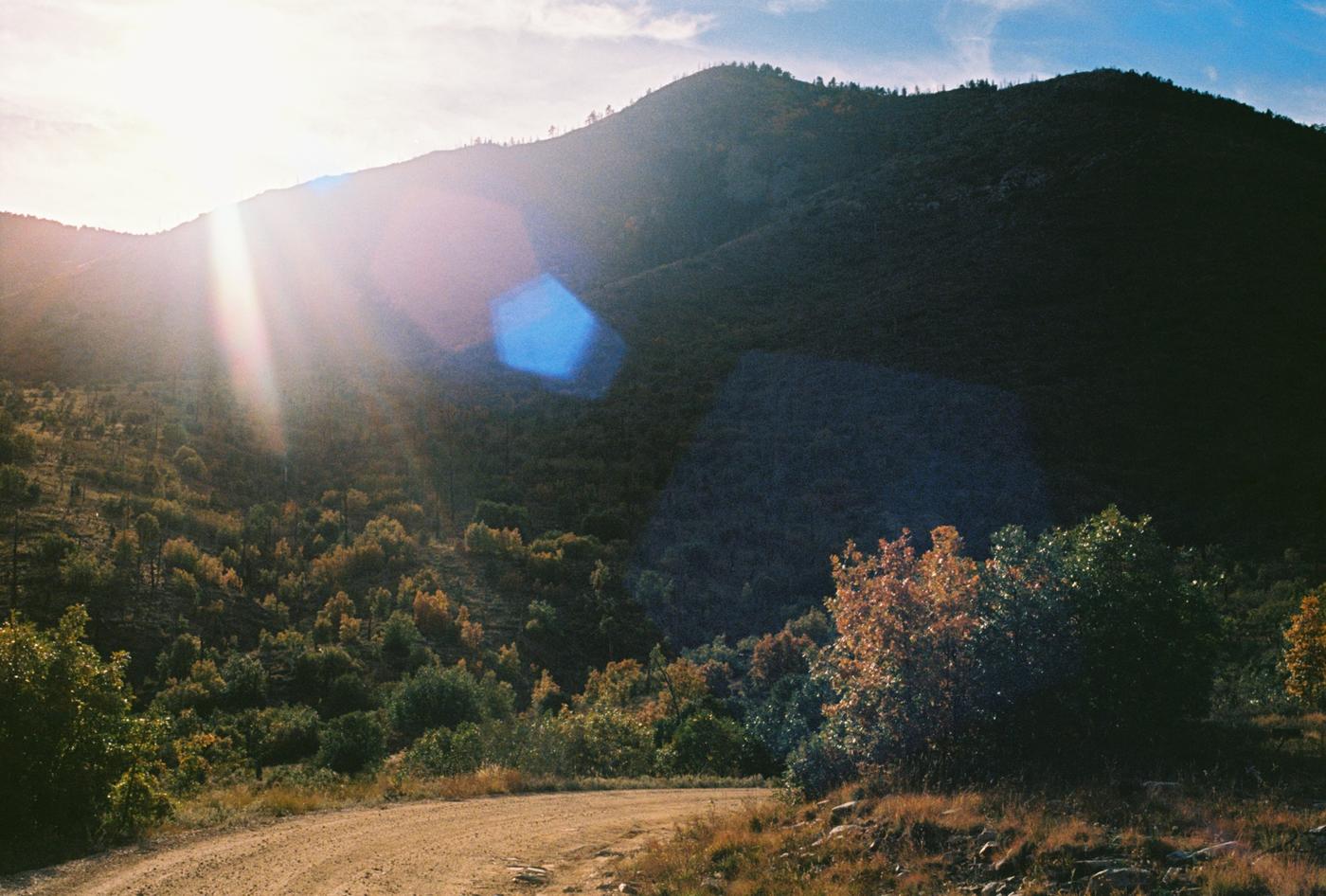 For us though, that was a huge part of the appeal. When we went to New Mexico back in April 2018 we were deeply moved by the, to us, alien southwestern landscapes, the impossibly long vistas, and bizarre but wonderful people. We had said to ourselves at the time we would gladly do it all again. And so far as the myriad of other options for bike touring trips, well… Against the backdrop of years of DC area political turmoil and pandemic fueled anxiety, the idea of weeks of planning for some excursion into the great unknown had limited appeal. It seemed… stressful.

For years, in our own individual ways, we had both been trying really hard. Trying hard to improve fitness, to ride faster, farther, trying hard to do better in races, trying hard to do better with training. Trying to figure out how to have a post-lockdown social life again, trying to navigate confusing and shifting social norms around masks and social distancing. Trying. But before we had even crossed Santa Fe’s city limits we had a new goal. We were going to try to not try too hard. 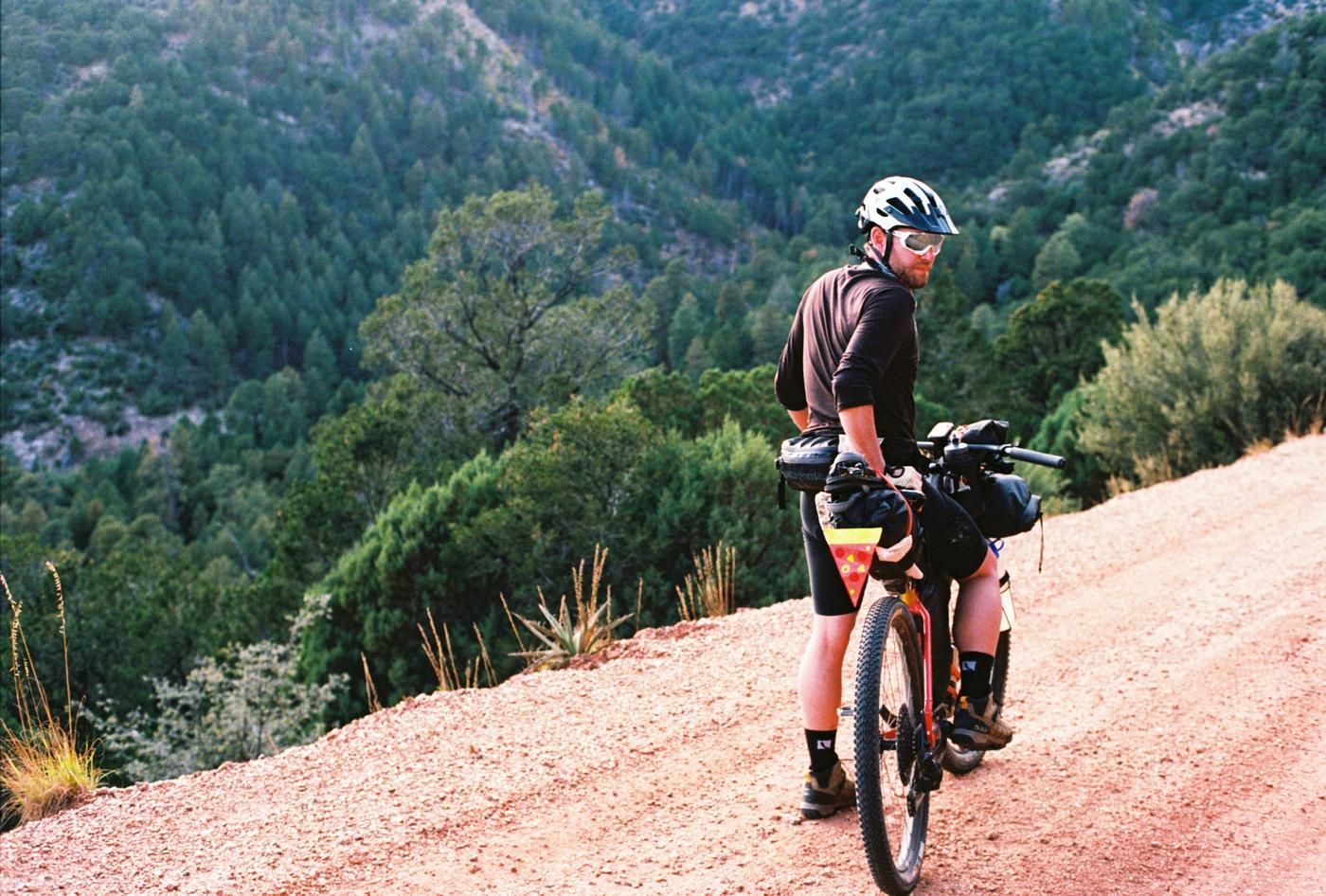 After years of exhaustion-by-existential-dread, we simply didn’t need anything more to be anxious about. The relative familiarity of a known route, while still being plenty adventurous, felt like the right fit for this time and place.

In choosing a familiar route we were shooting for a chill experience. There has been plenty written on the internet about the beauty and meaning of “struggle” on the bicycle, but the whole damn last 18 months had been a struggle and we were not all about that. We had a general feel for the route, our setups were dialed in with as many creature comforts as our bags would carry. I even brought along my Minolta SRT-101, a bag of film, and a couple of lenses. Not exactly consistent with “pack light, move fast” but am I so very glad that I did. 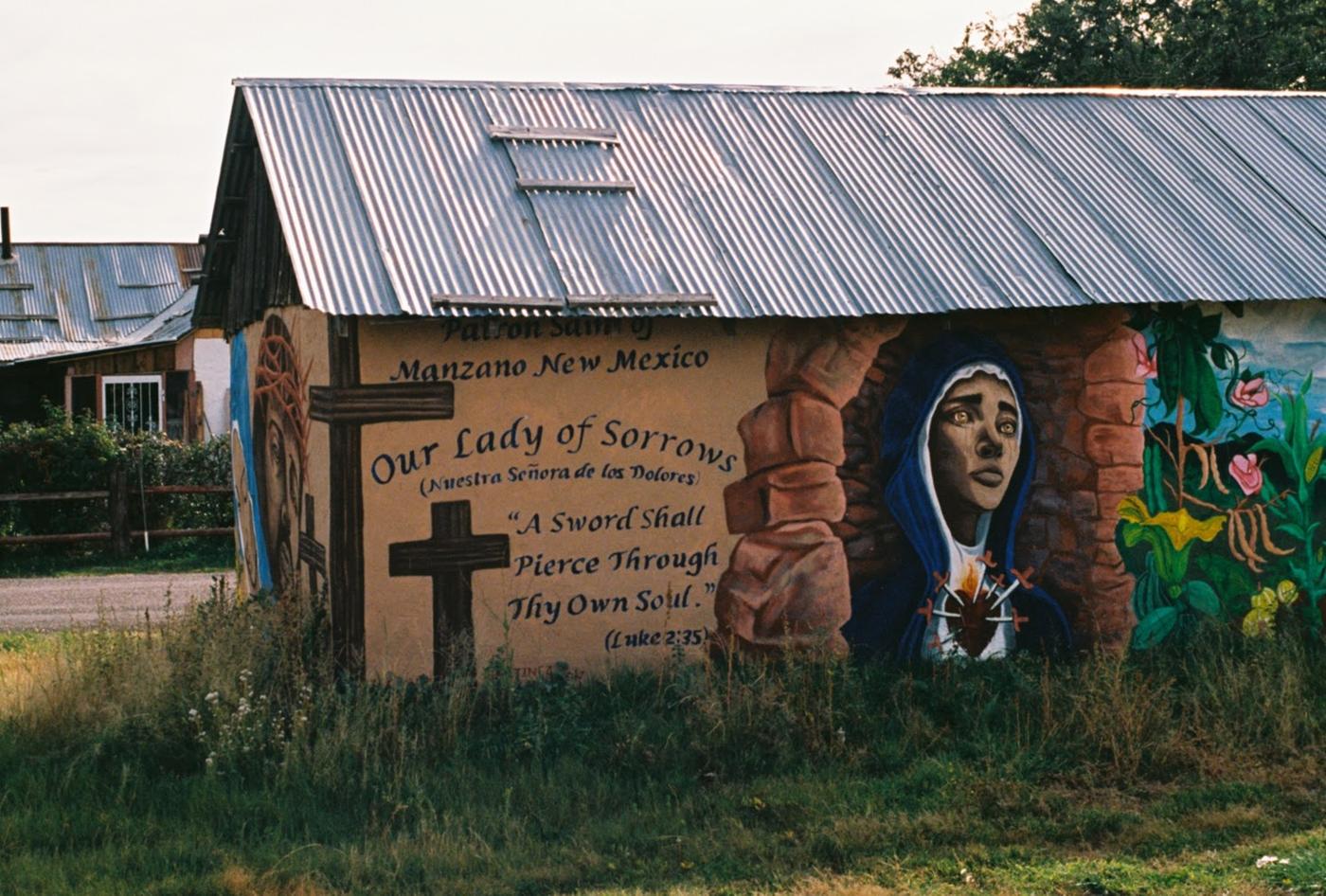 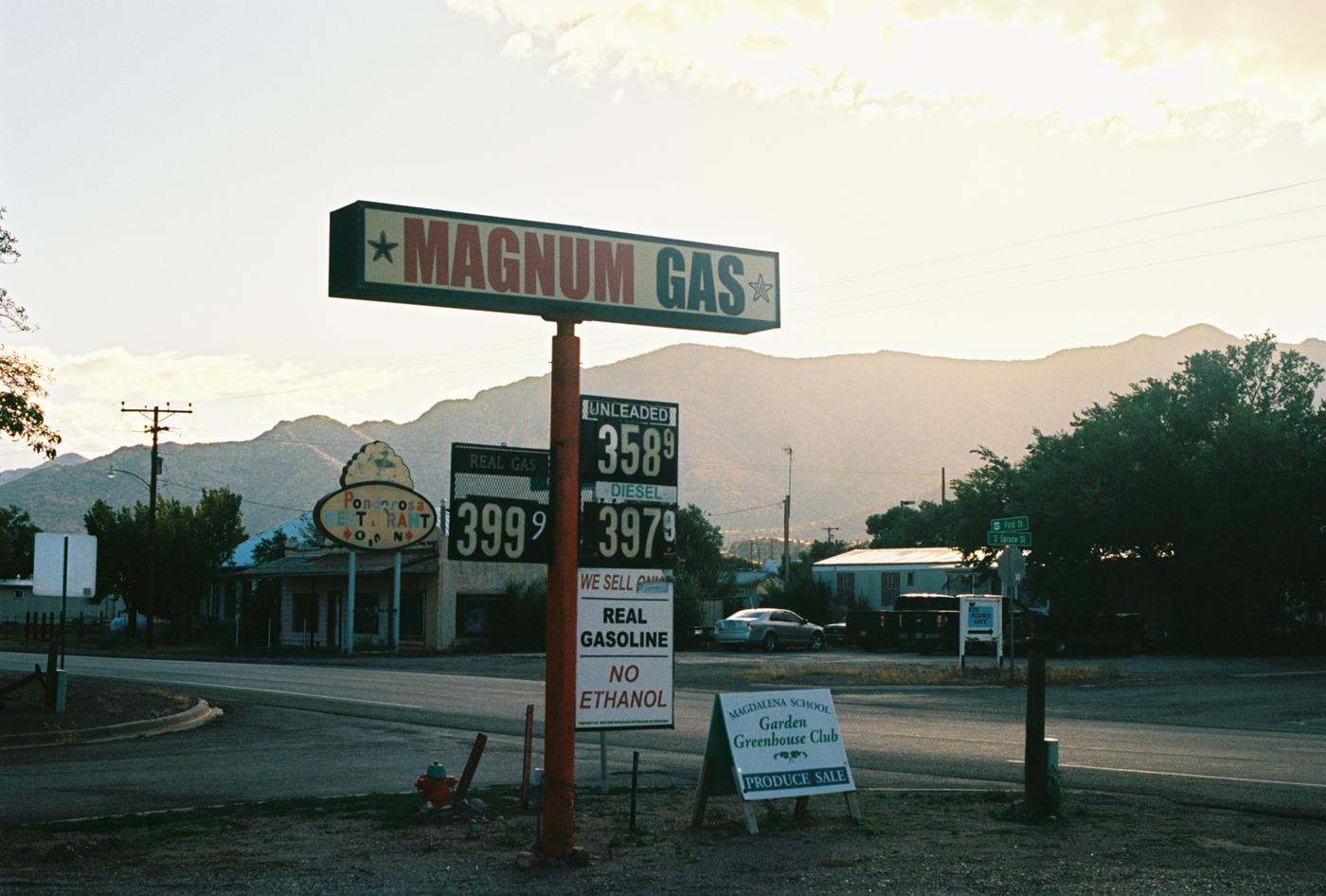 This idea we were going to attempt what is to us a massive undertaking: 500 some miles of remote, often rugged terrain over eight days – but be chill about it – did have a name until the afternoon* of our first day out when we coined it our “Chillest Known Time” attempt. 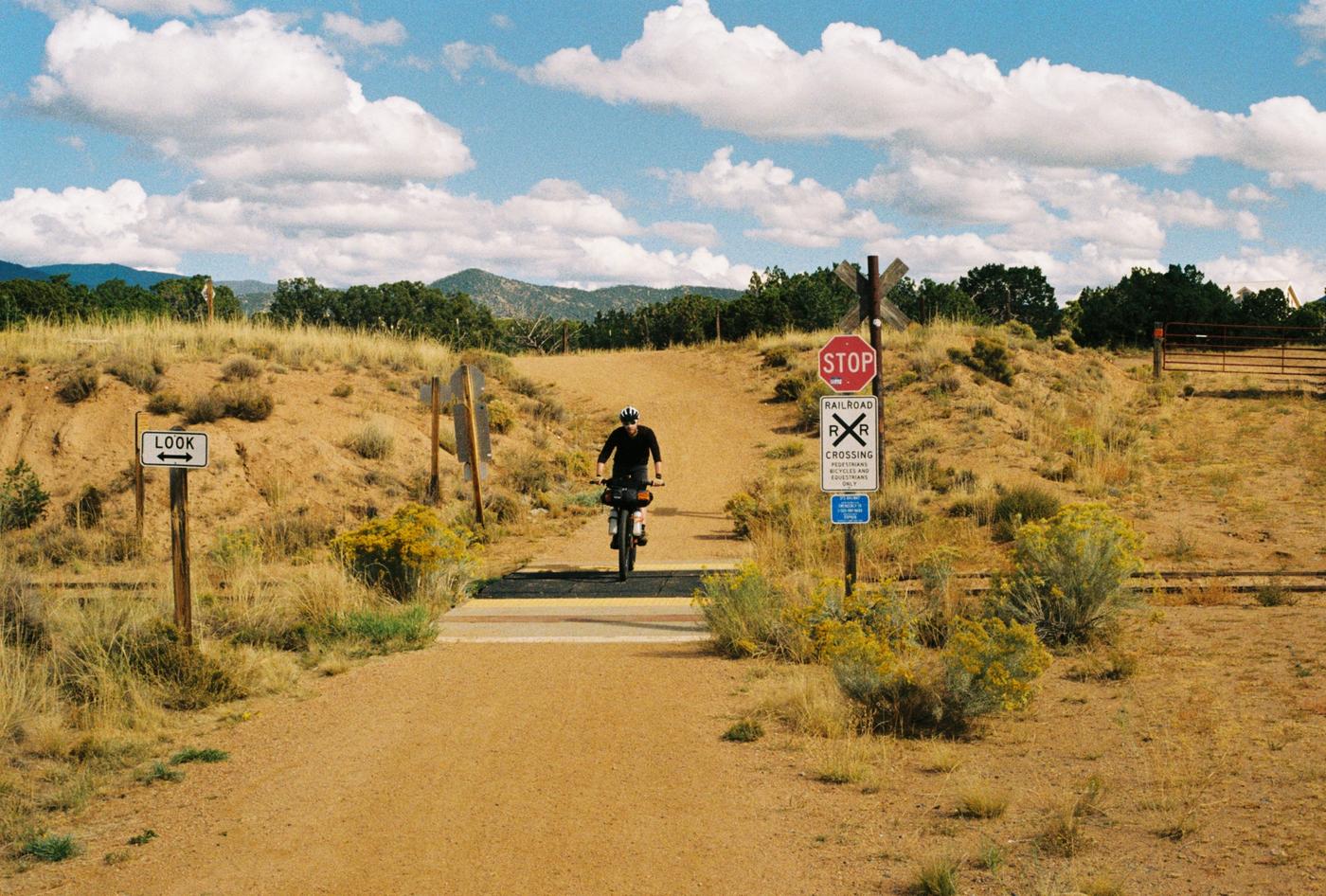 (*We set the pace for a leisurely pace on day one, hanging out and eating Tacos in Santa Fe until after 2 pm. With our lazy mid-afternoon start, our philosophy for this tour had a name: we were going to for a chillest known time (CKT) attempt. The CKT attempt started out swimmingly. John, who was kind enough to host us along with another visitor, Alexendera, the night before we headed out into the woods, asked us when we were headed out that morning. “After breakfast” became “after breakfast and a little ride around town” became “after breakfast, a ride, some pictures, a stop by to see Bailey at Sincere, and then lunch.”) 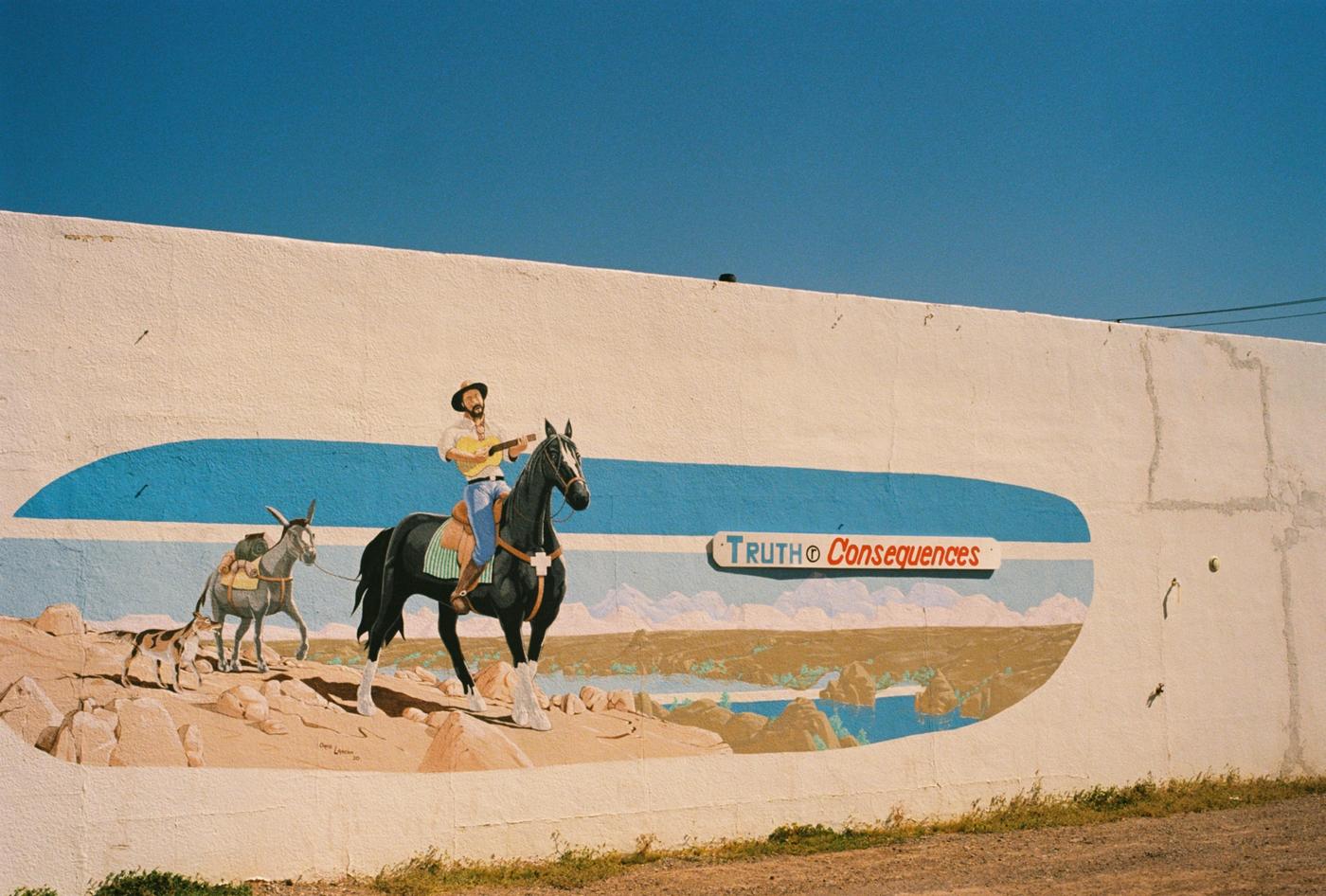 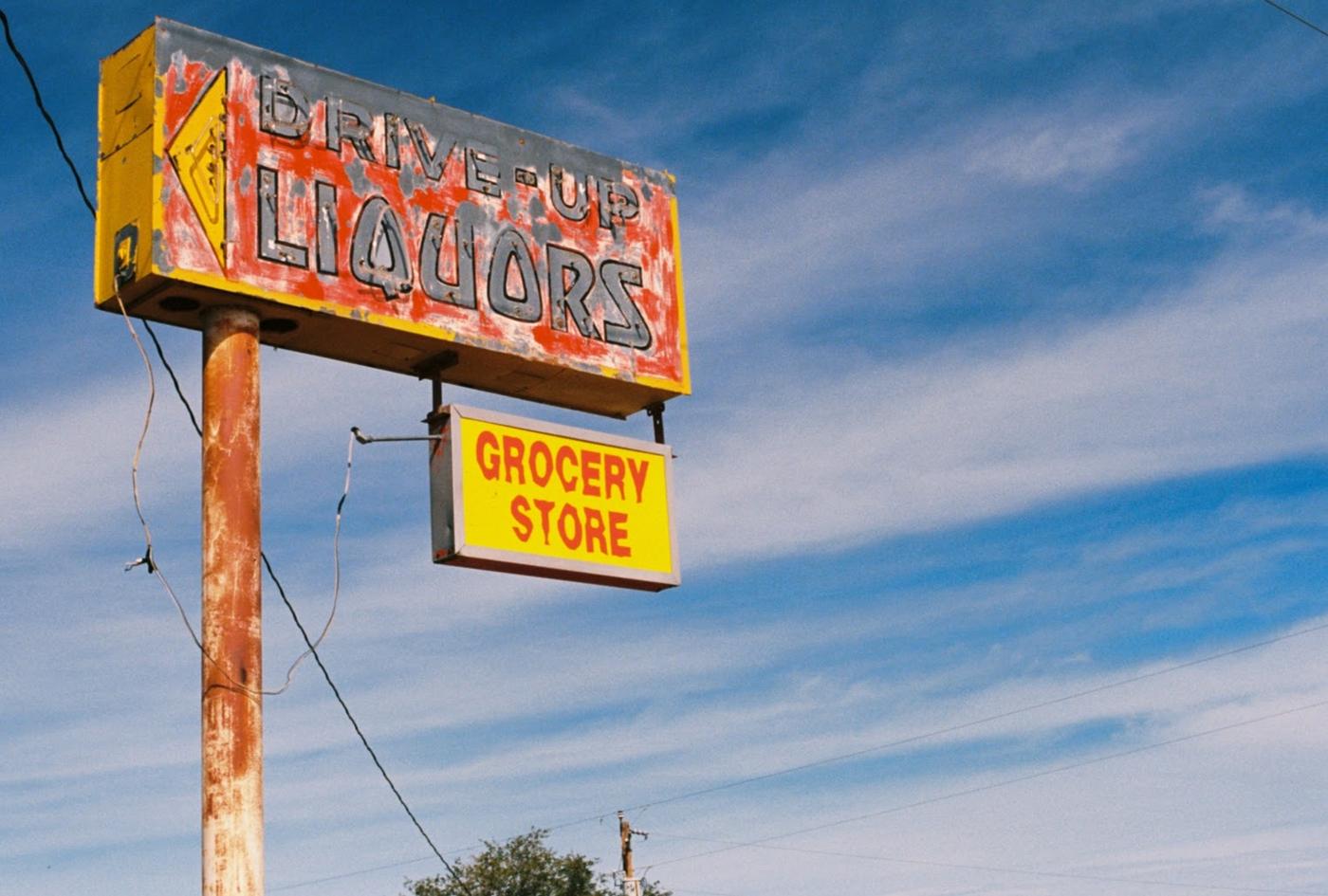 It was the middle of the afternoon before we set out on the route. We arrived at camp after a short but thrilling ride over some rough jeep track and made a warm fire with downed wood. As the sun rose on day two we were serenaded by the guttural calls of a nested pair of ravens in the tree above us. CKT attempt on track.

But like any great record-breaking attempt, it did not end up being an easy or predictable one. 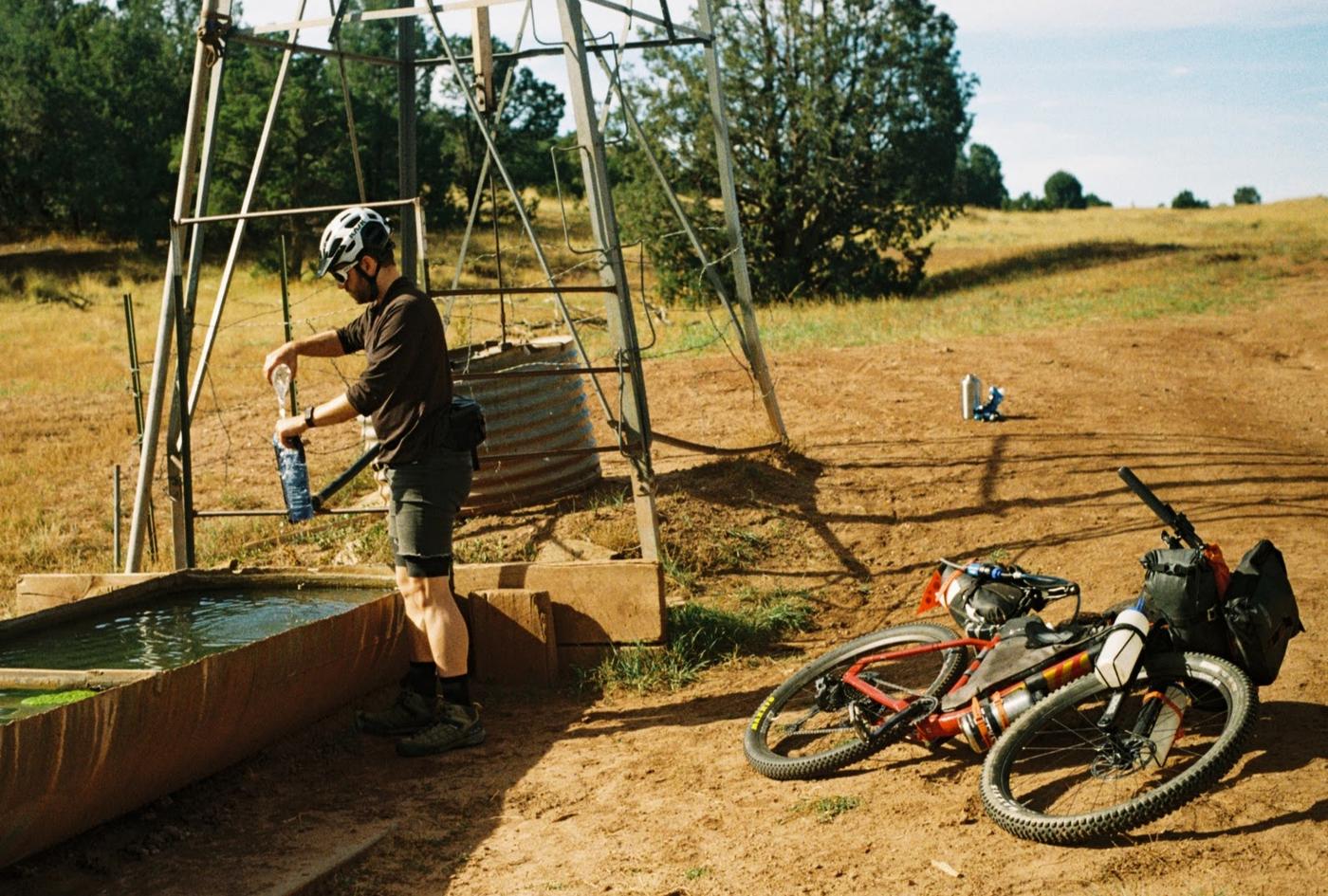 The wheels started coming off the “chillest known time” attempt on day two. We’d had a short and easy day one and had planned to put down some miles so we could stay indoors in Moriarty and enjoy the brews at Sierra Blanca Brewing. We expected our day to be very chill. We figured with a largely downhill day we would have no problem getting in early, even at a relaxing pace. What we did not anticipate was a day-long stiff headwind and a really stubborn puncture in my rear tire. Bacon strip, then Stan’s tire plug, then some added sealant. Still spewing orange goop and losing air. We spent the last two hours of the day stopping every few miles to add air on a busy, paved, 55 mile an hour highway shoulder. It was not chill. 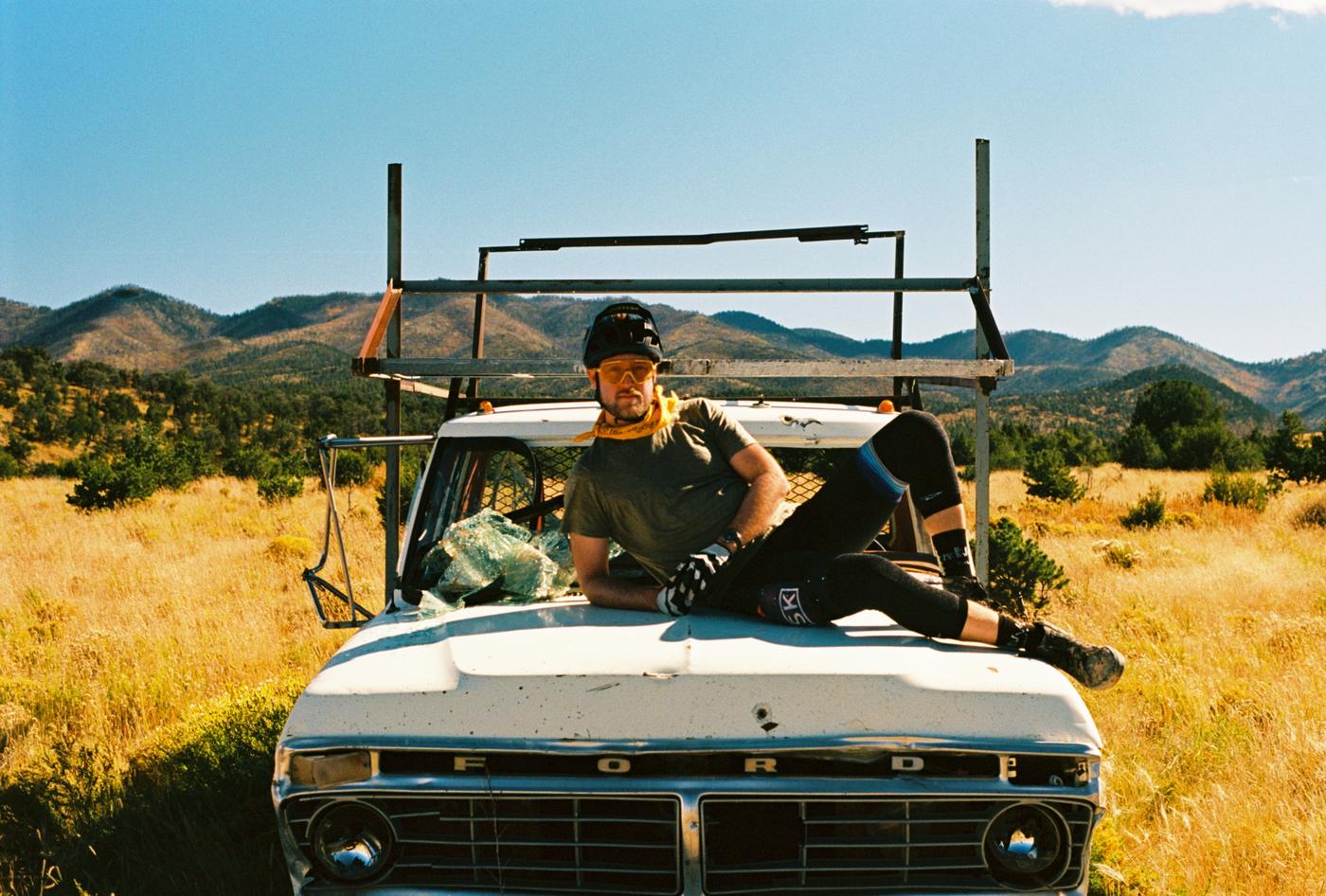 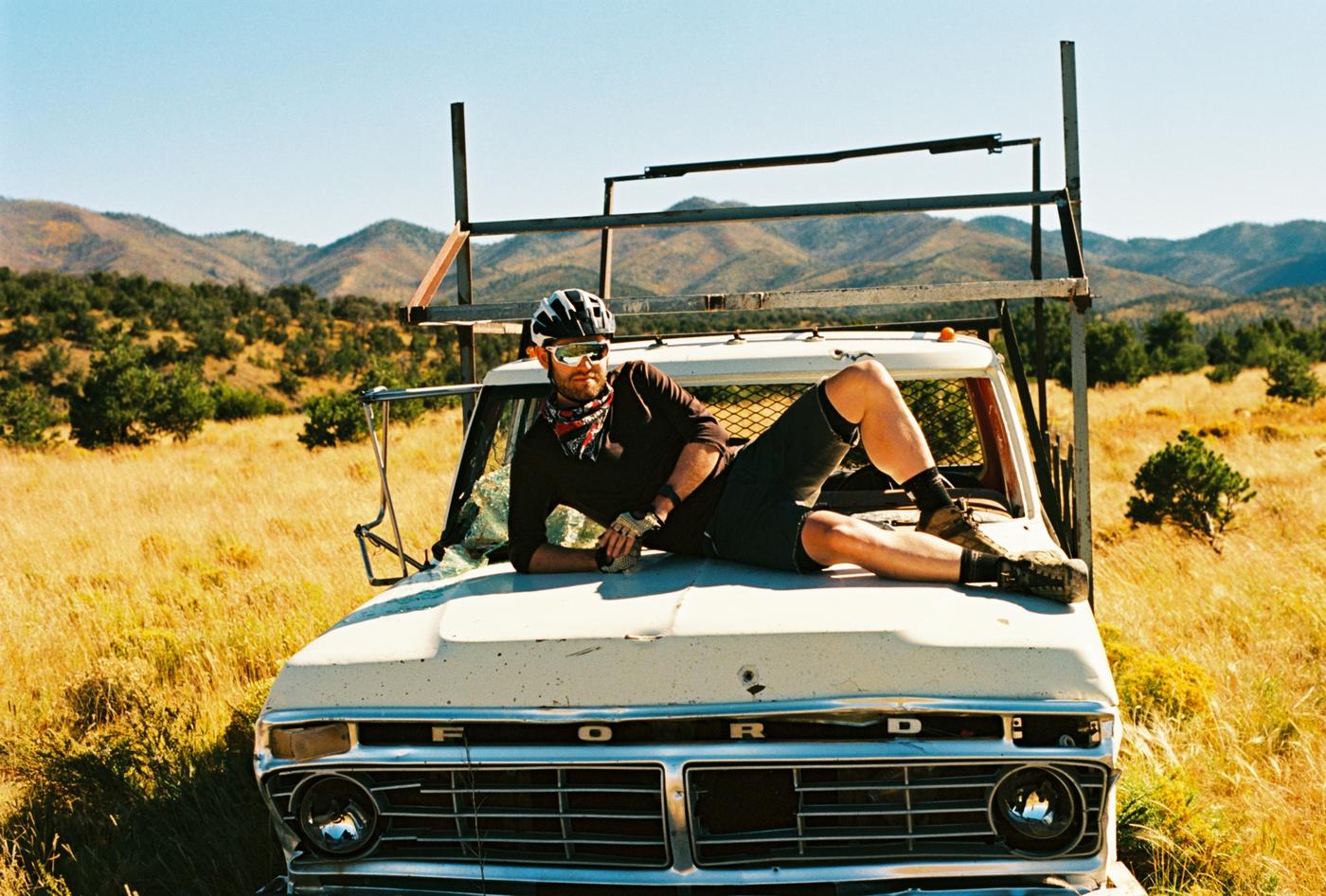 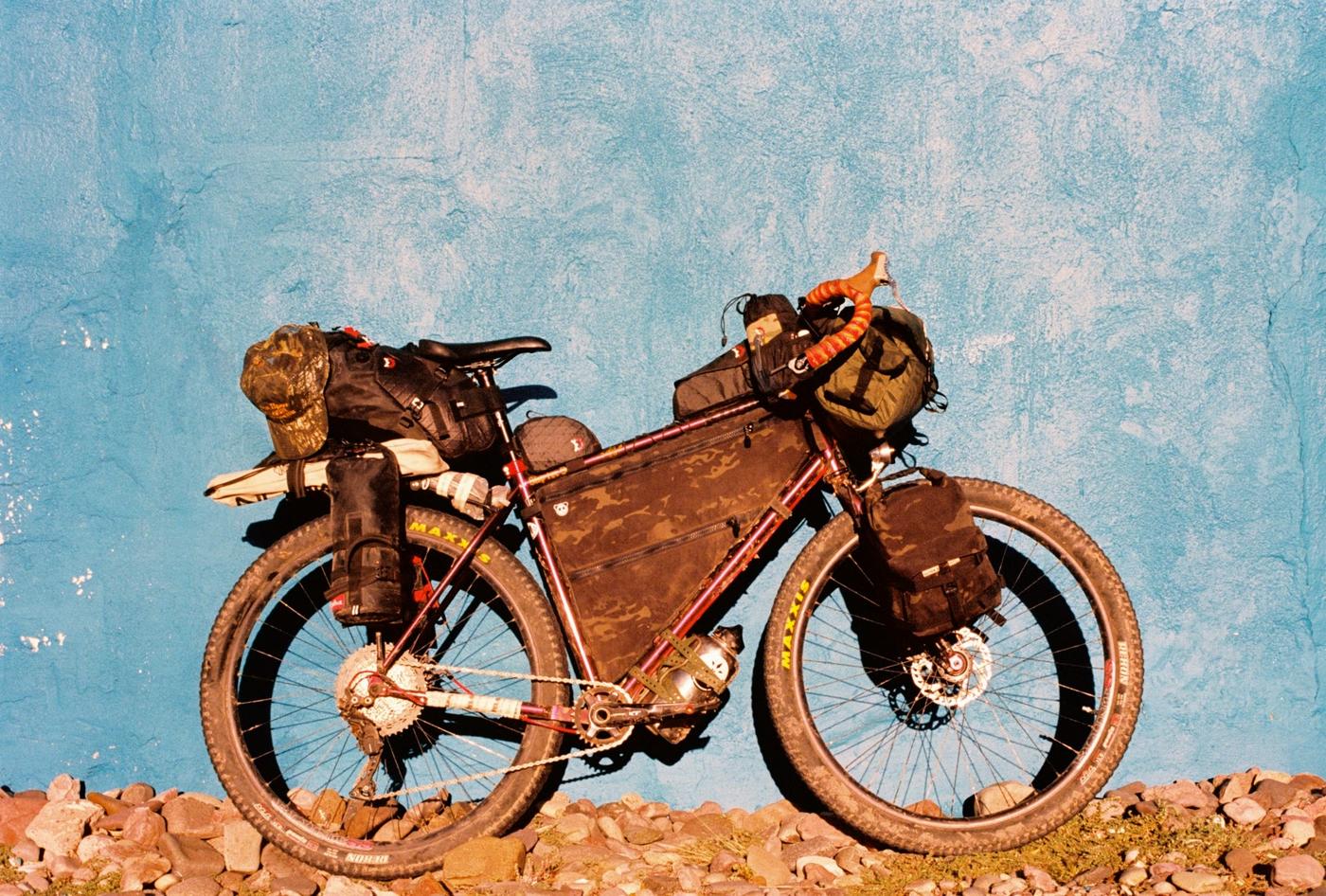 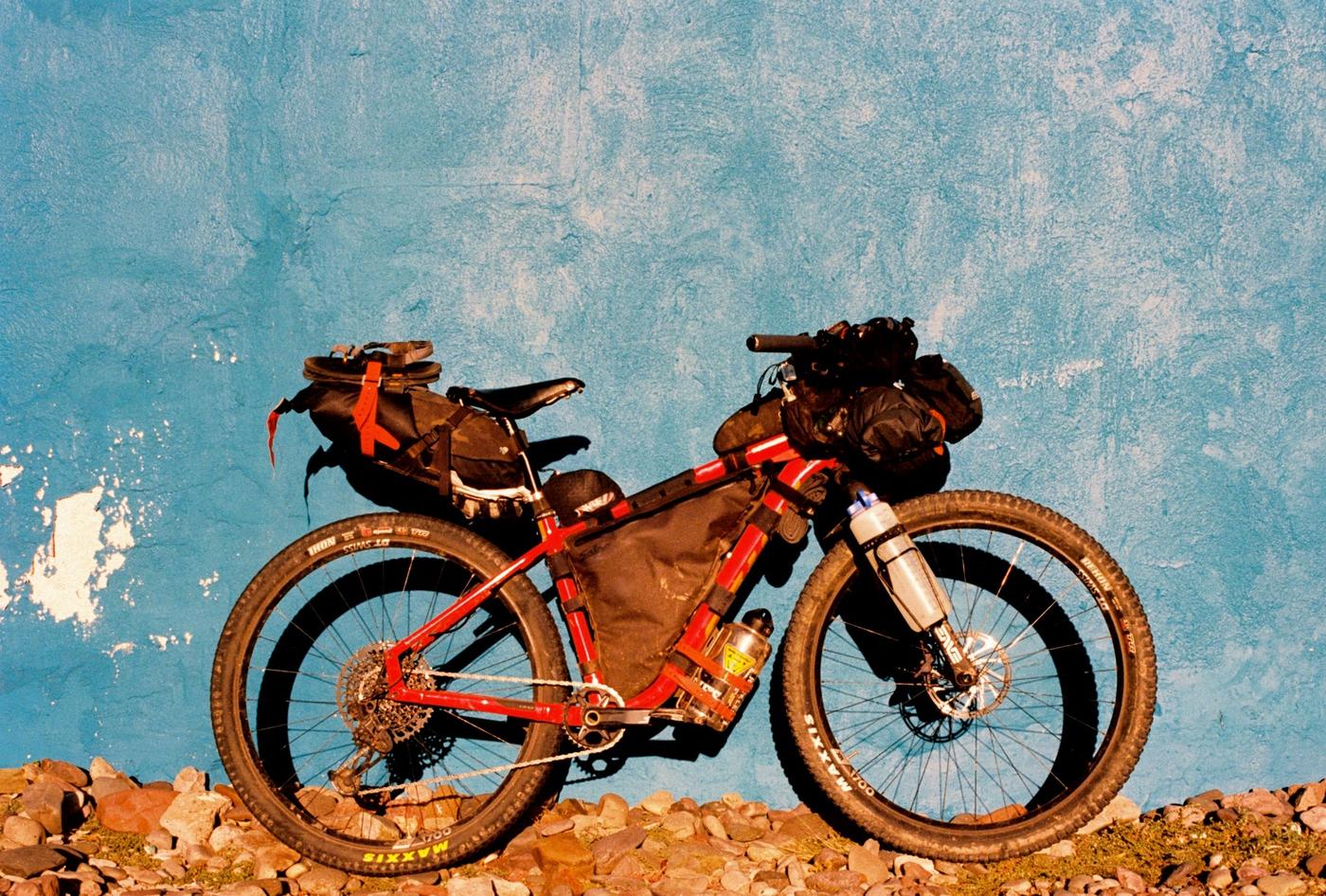 Between the soft tire, endless rollers, and persistent headwind I was feeling physically exhausted and mentally defeated by the end of day two. Somewhere along the line, Kevin’s tent pole lines had snapped as well. With belongings yardsaled throughout the hotel room, Kevin working a fresh line into the tent poles, and me working on my rear tire I began to have fantasies of calling the whole thing off. Maybe we could get a rescue from nearby Albuquerque? This keeping it chill thing wasn’t going well and it was only day two.

As this complete photoset illustrates, we did push on and complete the route. The tire did seal, and held until the last day. As it turned out, We did bring enough P cord for Kevin to repair his tent. 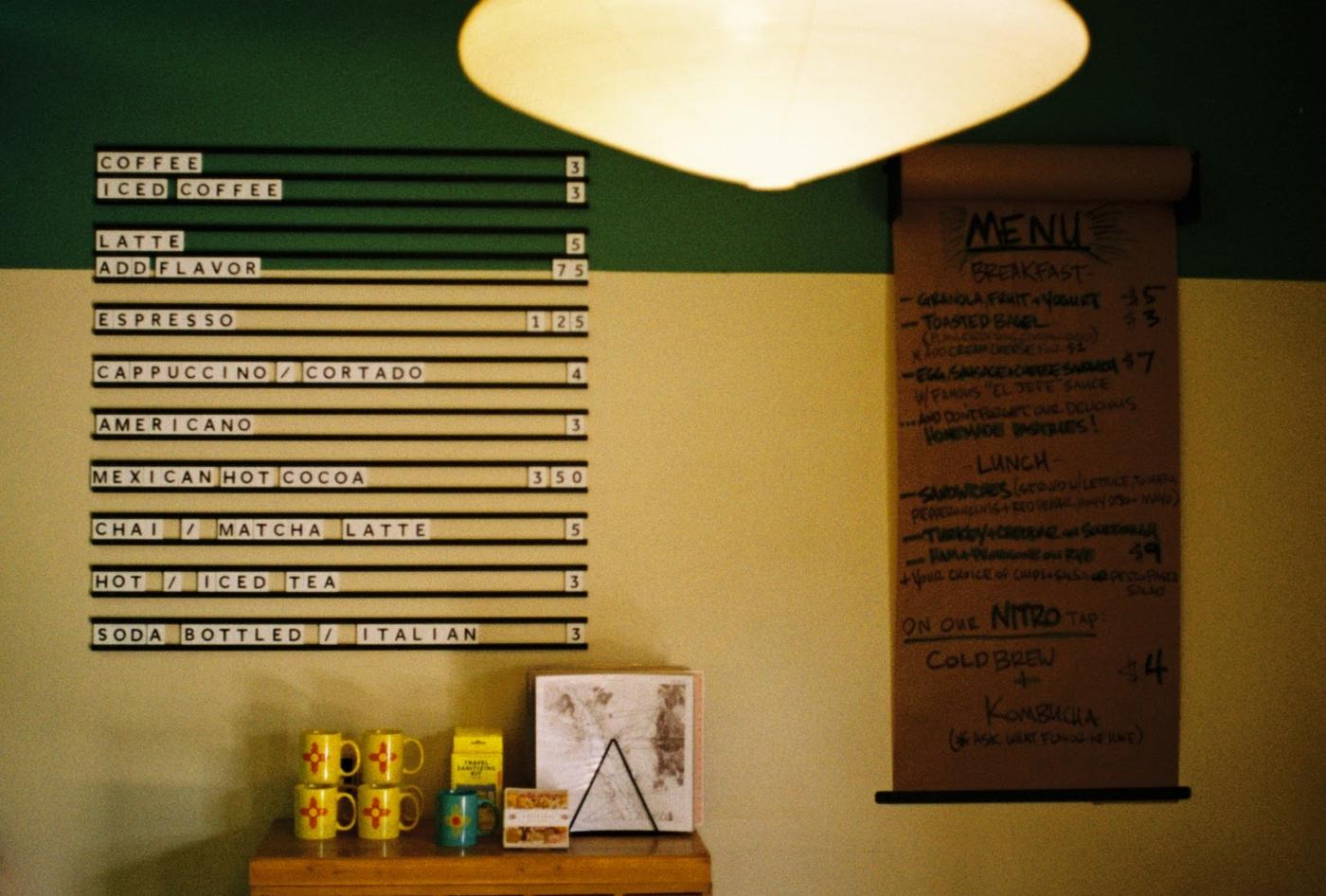 Over the next seven days, we contended with a few very planned 80-90 mile days, some high winds, more tire issues, a sub 20-degree night, and even some knee-deep mud and a washed-out river crossing. By the time we limped our tired legs and leaking tires into Outdoor Adventures in Las Cruces, we had experienced our share of type two fun and physical and emotional challenges. We’d been nearly overcome with anxiety at the thought of camping in exposed lonely places, had fretted about flat tires, been chased by doges, sunk to our ankles in sucking mud, and finished a 90-mile day of riding well after sunset. 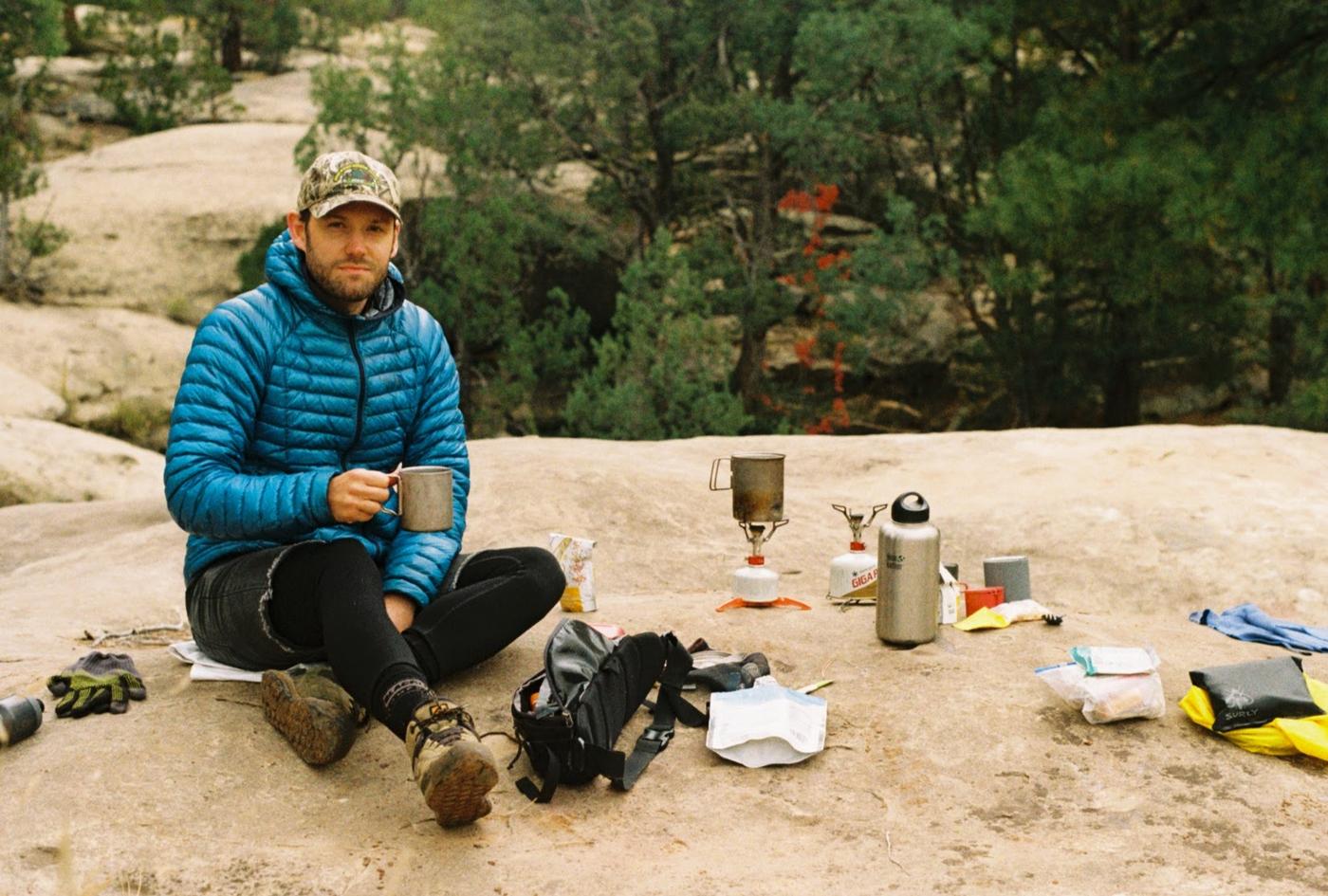 In my multiple attempts at describing our CKT attempt through the written word I have consistently failed to describe what sounded like a “really chill time.” Each version of this article has made the trip sound really challenging. An obstacle that through sheer grit alone was overcome. But it is important for me to attempt to convey this: we had a really chill time. For a week and a half, we escaped the pressures of work, of racing, of a high tension political environment. We escaped the overwhelming sense of existential dread fueled by pandemics and the fear we were experiencing the final days of America’s flawed democracy, replacing it instead with more simple, tangible concerns like from where our next food, water, and shelter opportunities would come. 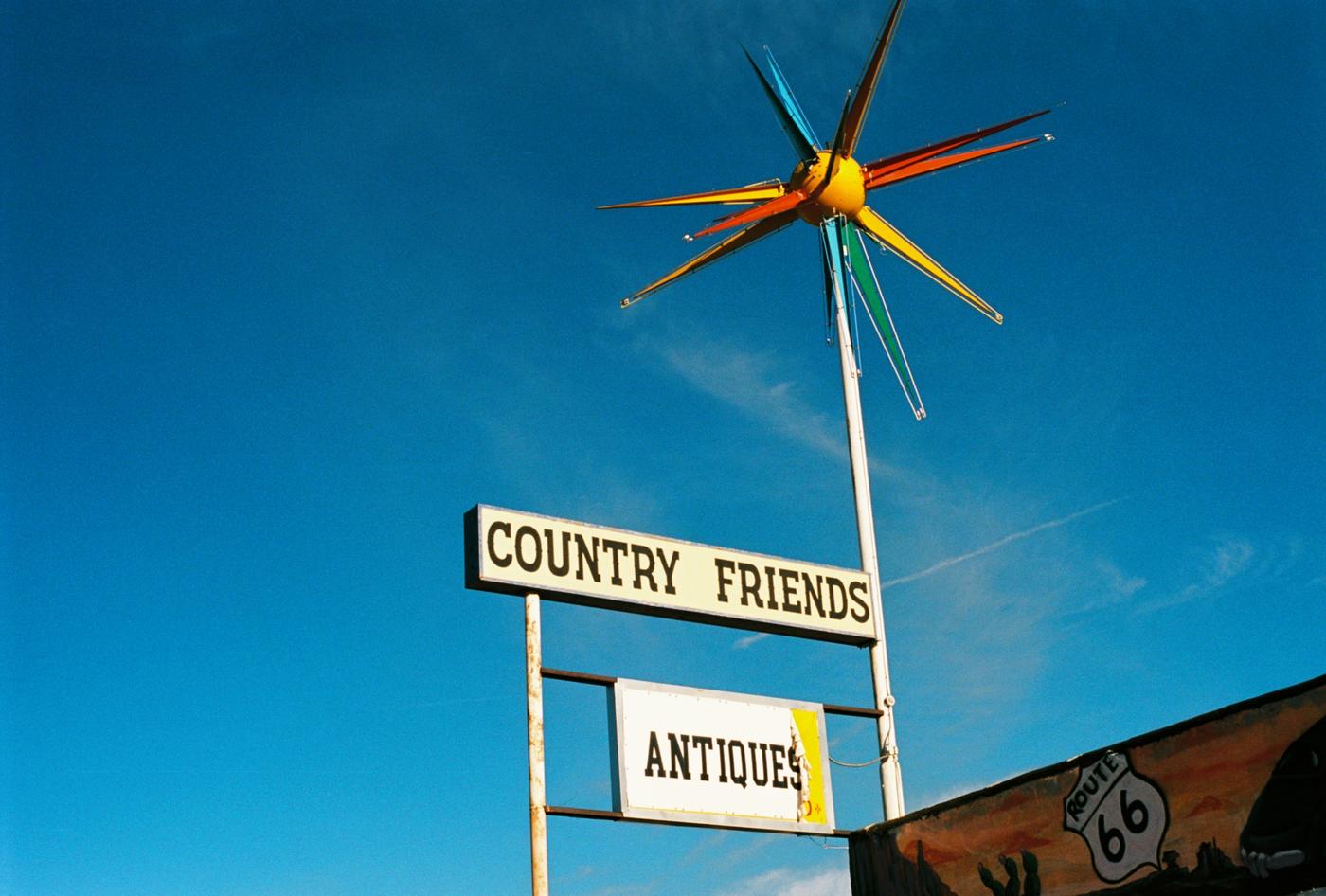 We finished the route at Andele’s Dog House – spewing sealant all over the sidewalk from no less than 100 goat head holes – with full conviction that despite the challenges we had nonetheless established a Chillest Known Time. Our belief that we could complete a rugged 500-mile route through the middle of New Mexico without physical or emotional challenges was an illusion, sure, but the absence of challenges wasn’t what would end up making or breaking a CKT. When we absolutely needed to cover ground to get to shelter, food, or whatever we turned on our try-hard. Like when 55-mile winds were predicted, we did two days worth of riding in one day to get into Truth or Consequences a day early and hunker down for the windstorm. 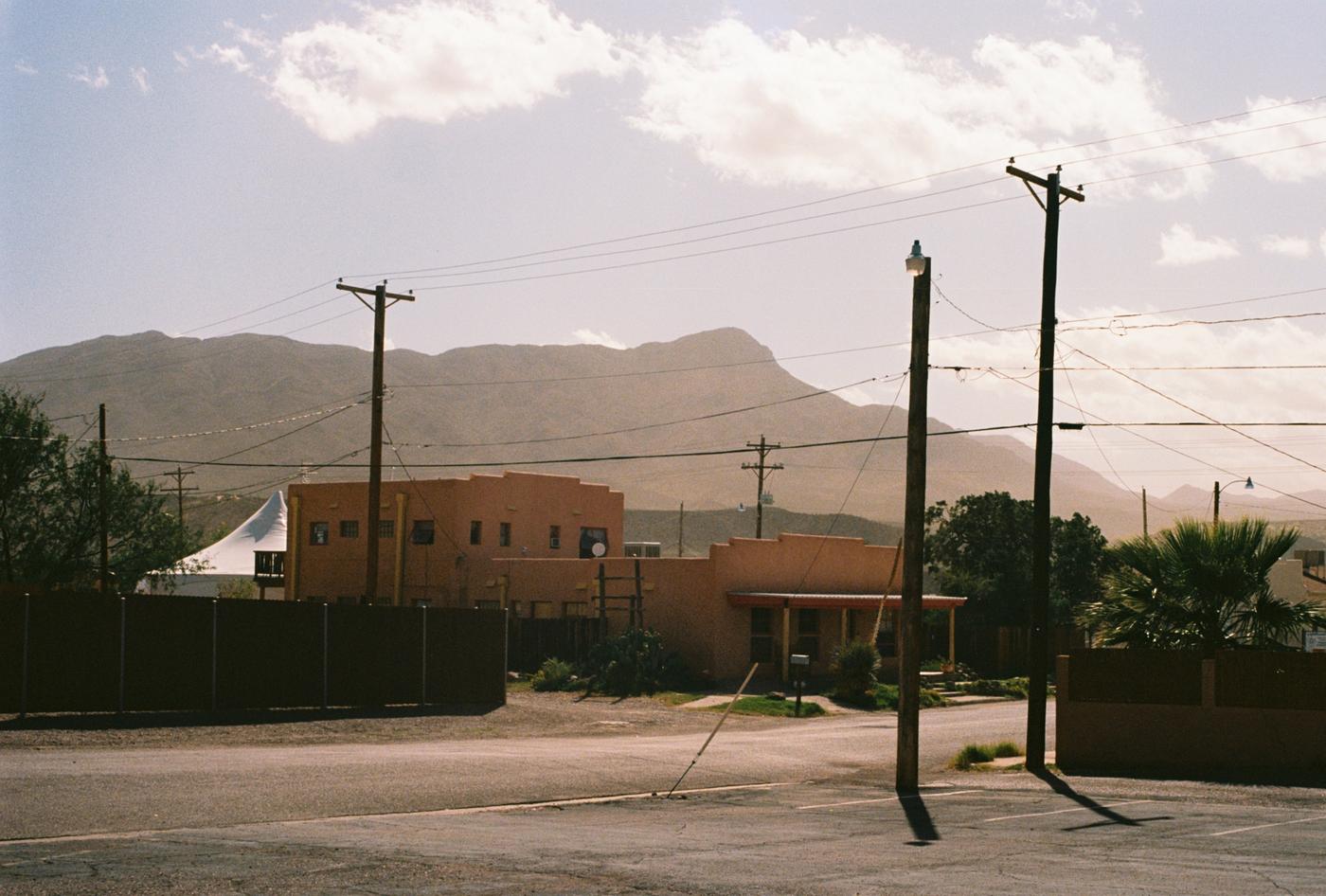 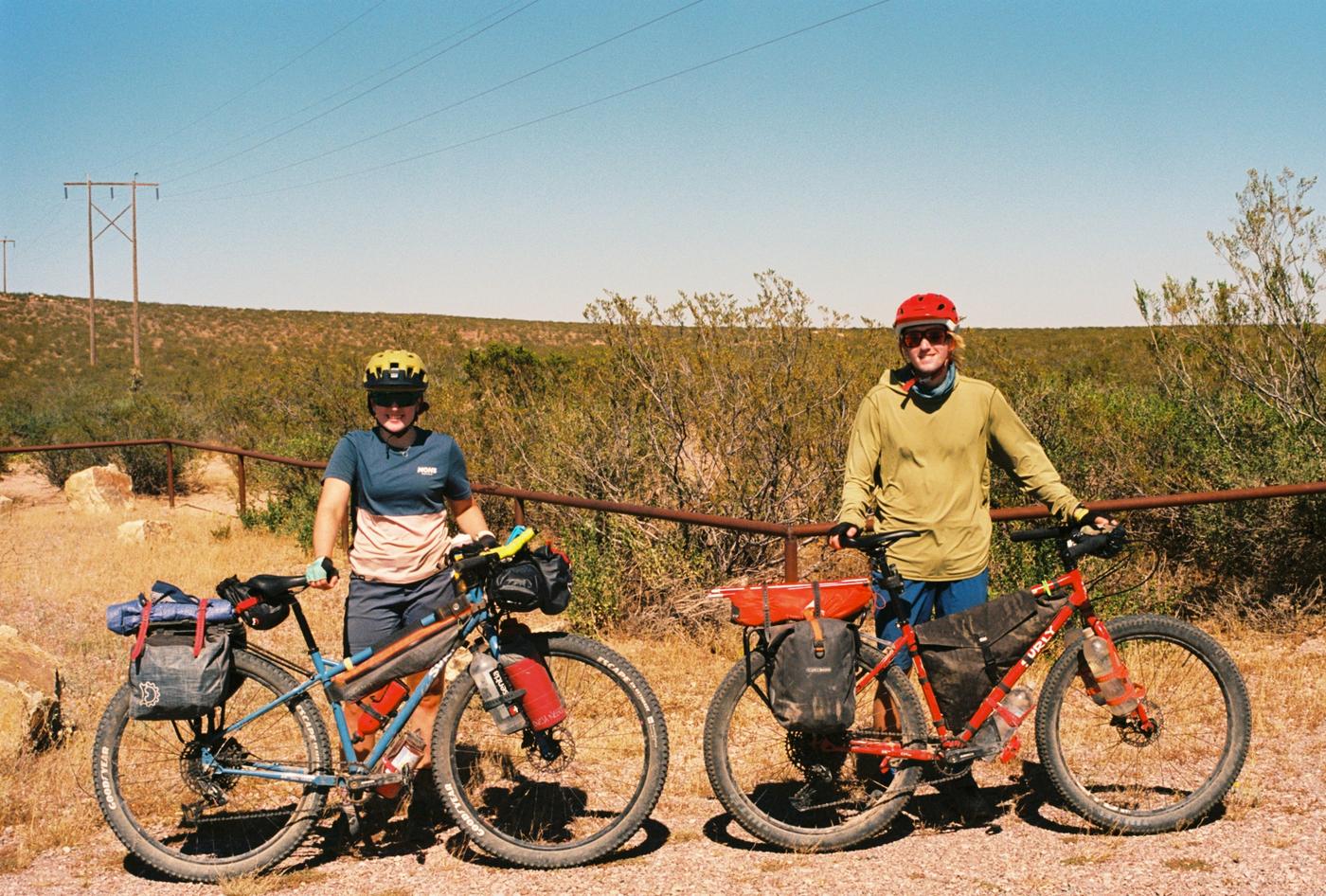 Sure, we ended up having to try pretty hard a few times. But that’s not what defined this trip. We also spent a wonderful rest day lazing about T or C while the winds howled that was pure luxury. We stopped to have long conversations with some of our favorite characters from our previous trip (Ernie at 10 Points, Linda at the Moriarty Quality Inn) and new friends (like Travis: the retired rodeo star who lives right outside of Riley, and Carol: the new owner of the vastly improved High Country Lodge in Magdelena who kept the lights on for us to roll in after a 90-mile day; and even another two folks, Ian and Ellie, whose tire tracks we followed for days before finally catching them on a lonely paved road south of Truth or Consequences.) We stopped to pet dogs (so many dogs;) we made leisurely camp coffee every morning, ate up dozens of burritos and enchiladas; and regularly stopped to take pictures and enjoy the ever-changing, otherworldly beauty of New Mexico’s landscapes. Kevin and I have done way harder rides together before. We got to spend more than a week doing nothing but riding bikes, just two old, close friends shooting the shit and pedaling our bikes. I’m convinced we’d have been able to spend a month out there without getting sick of our riding or each other, so 8 days passed in a real hurry. This trip was a privilege. 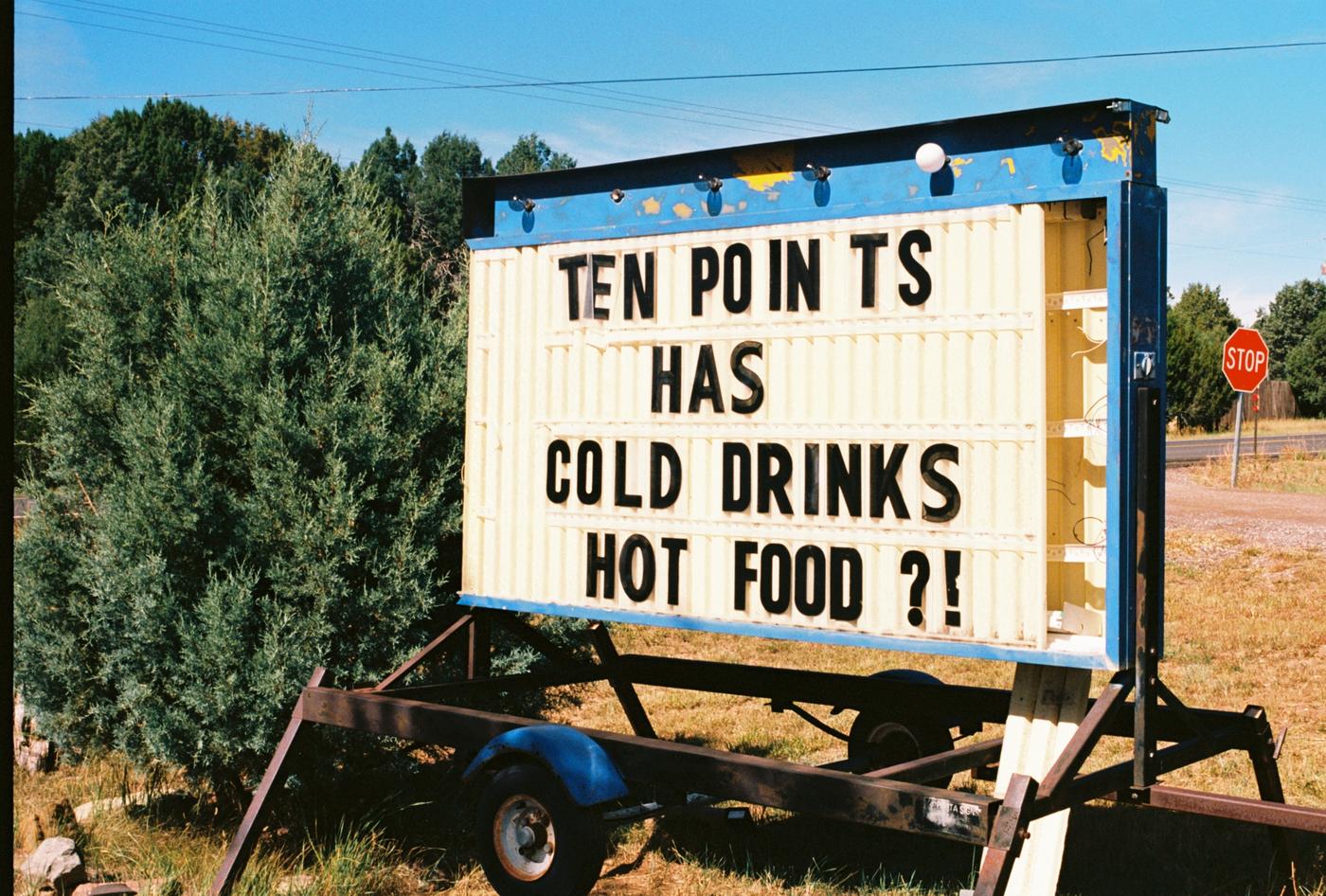 Every. single. one. of the 228 photographs I took on this trip represents a moment taken to survey the scene, carefully consider the light, frame in the shot, fidget with the manual focus ring, and snap the shutter. New Mexico’s chillest known time was set in those moments. This experience was a perfect mix of friendship, fun, and adventure. It felt like one big, deep breath in and out and I hope that this (considerably paired down) set of photographs do a better job of conveying that than my clumsy words ever could. 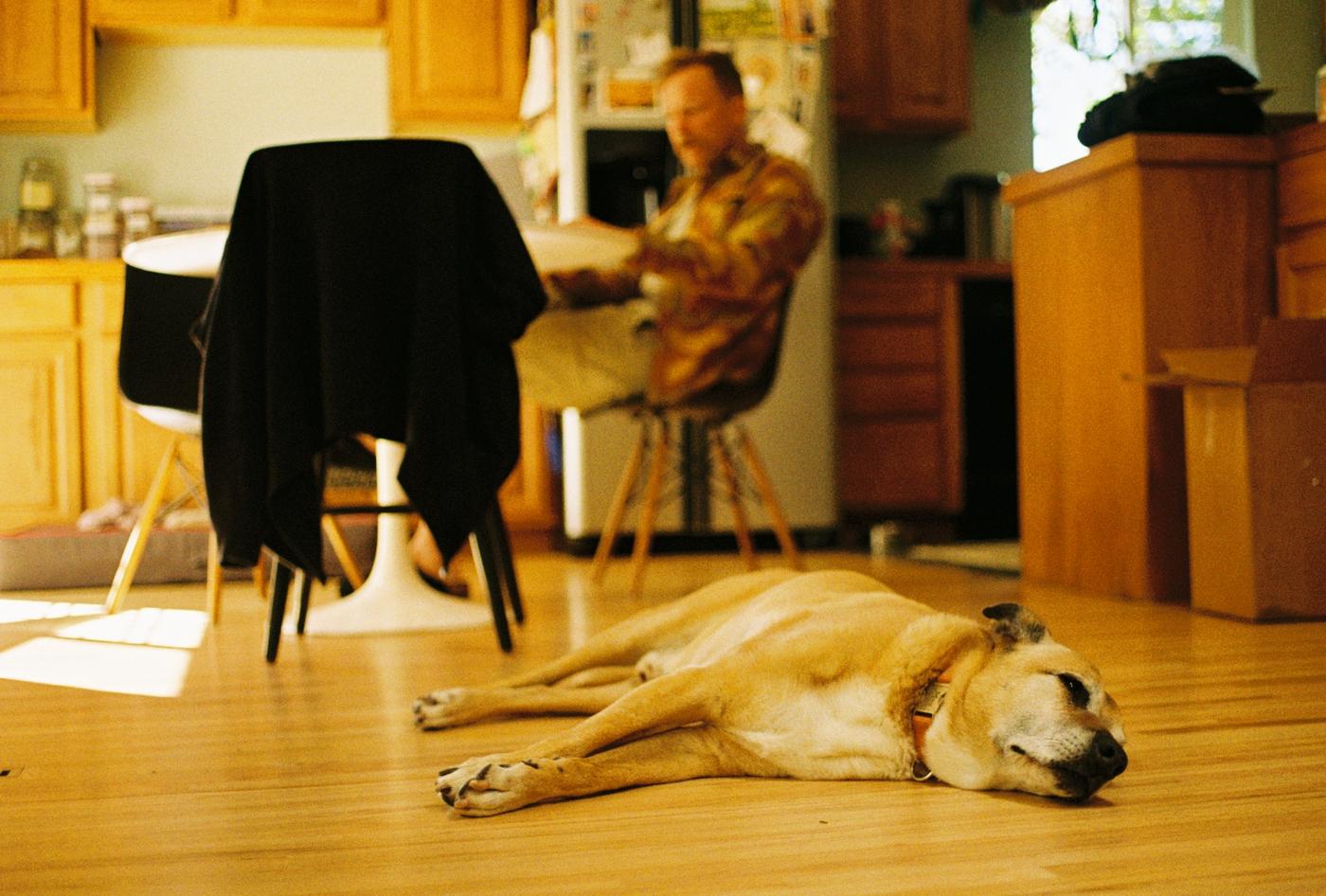 P.S. Tech Notes: prior to this trip all of my experience with analogue photography was on the east coast, which looks… different. These photographs were taken on 4 rolls of Kodak Ektar 100, a film suggested for this project by John Watson, and 2 rolls of Kodak Gold 200 I had lying around. The Ektar was reserved for the trip itself while the Gold was used to document the bookends of the trip in Santa Fe and Las Cruces. All of the photos were shot on my Minolta SR-T 201. I couldn’t decide between my Minolta Rokkor MD f1.7 50mm lens and my Minolta Rokkor-X MD f2 45mm lens so I brought them both and a teleconverter, using them interchangeably. I ended up around 50/50 between using the body’s through-the-lens CLC metering and the “sunny 16” rule.