Oftentimes during trips like this, you just go with the flow and don’t ask questions. When the team at Circles began planning our bicycle tour around Mount Fuji, the only things I asked were what kind of roads we’d be riding and what to expect in terms of weather. This would answer every other question in terms of my gear and bicycle selection. We already got the run down on how this trip was faring on yesterday’s post, so I’ll spare you the re-introduction here but what I will say is, sometimes rides like this present a pleasant surprise when you’d least expect it…

After three amazing days on the road, our itinerary took us to Oshima, an island about an hour ferry ride from Atami. Now, here’s where keeping information a “surprise,” or in better terms, not asking about all the details, make for an interesting morning. I knew if we’d be riding a ferry or a train, we’d have to partially dissemble our bikes and cover them in a rinko-bukuro, or bike bag, yet I didn’t know that we’d be riding a jet ferry, with a special disruptive pattern designed by artist Ryouhei Yanagihara. Yes, a jet ferry. It literally travels at high speeds on these crazy jet foils that hold the vessel above water. Shit was cray. Surprise number one out of the way…

Now, I’ll skip ahead here with some post-ride knowledge and say, HOLY SHIT, we were going to ride up an active volcano. Mount Mihara is at the center of Oshima and has quite the amount of cultural weight in Japan. First of all, it erupted back in 1986, sending lava fountains 1.6 kilometres in the air and Oshima’s residents back to the mainland screaming. Coincidentally in 1984, the Japanese government imprisoned the rambunctious Kaiju, Godzilla in its crater for being a bad dude. Think about how that caused a bit of a frenzy… It wasn’t until 1989 that the Japanese government released Godzilla from Mount Mihara to battle Biollante, a crazy plant Kaiju. This part of Kaiju history I was aware of, now where the hell Mihara was in terms of Japanese geography, I had no idea. It wasn’t until we were on the Izu Oshima that I put it all together. Rad! Of course there are other pop-culture factoids about Mihara like the dude’s mom from the movie the Ring killed herself here, which, turns out, may or may not have been a reflection on the thousands of Japanese people who took their own lives on Mihara in the 20th century by jumping into the crater. Crazy stuff… Anyway, back to this bicycle tour. We got dropped off by the jet ferry and onto the northern-most port of Katusaki and were greeted by fleeting clouds and fresh streets, having just been cleansed by a torrential downpour. Hey, remember, it’s Japan’s rainy season. Our agenda for the day was half known and half unknown. We’d ride from port to the Toshiki camp ground, inside a “bio park” on the southern coast of Oshima. It was a chill-ish ride of around 17 miles and 1,300′ elevation, complete with a pit stop for lunch inside the Habu explosion crater that has since been made into a port. Seriously. Wow. 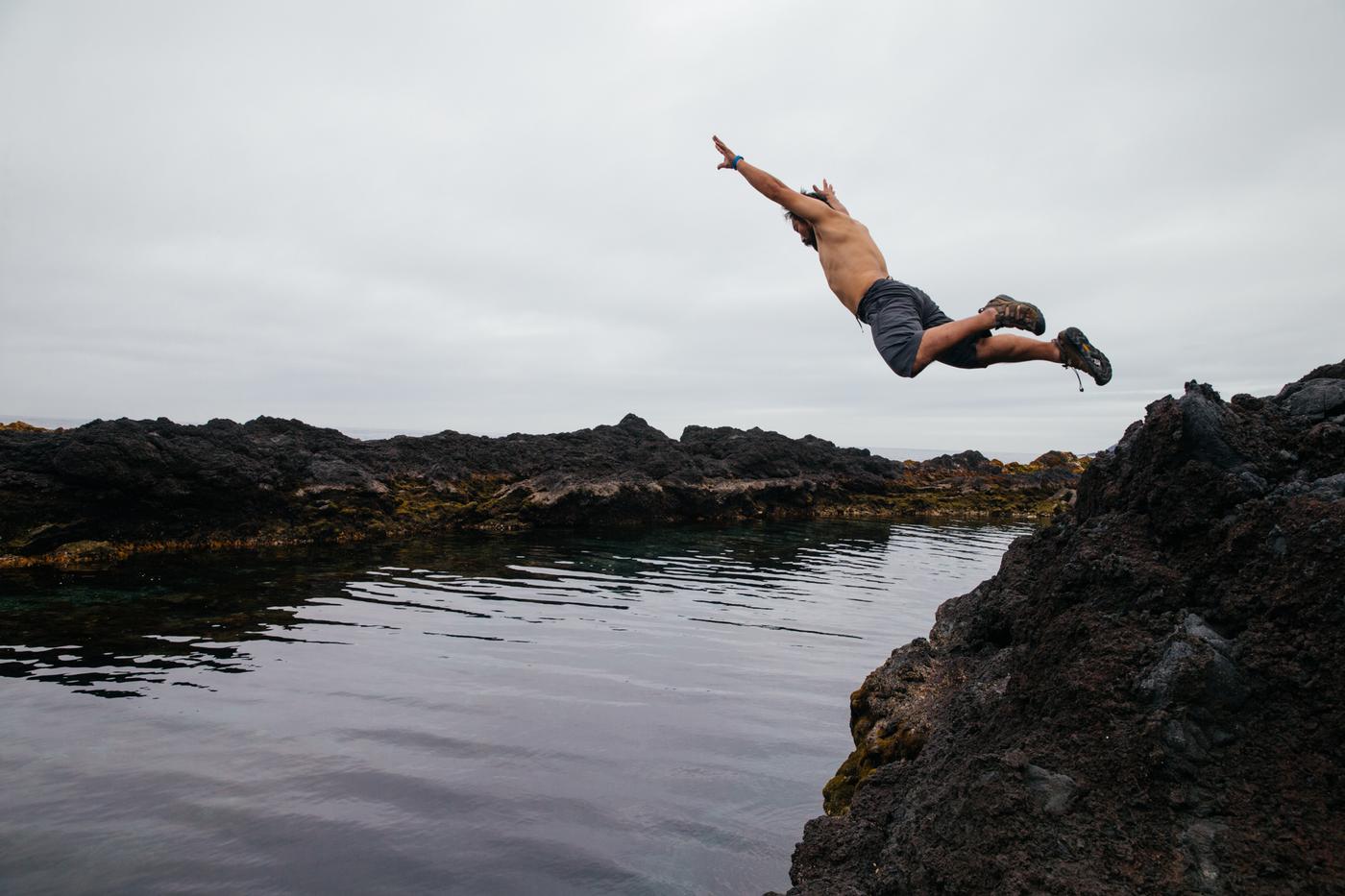 Oh and a nice dip in a tidal pool!

After three solid days of pretty hefty riding, we felt, I dunno, a little unsated with our day’s agenda. Could we do more? We knew a few things: there was an active volcano to ascend on our bikes, but the weather was shit and we honestly we had no fucking idea where to go. Our guides Shige and Makoto put it like this: “we’re going to go explore around the volcano…” 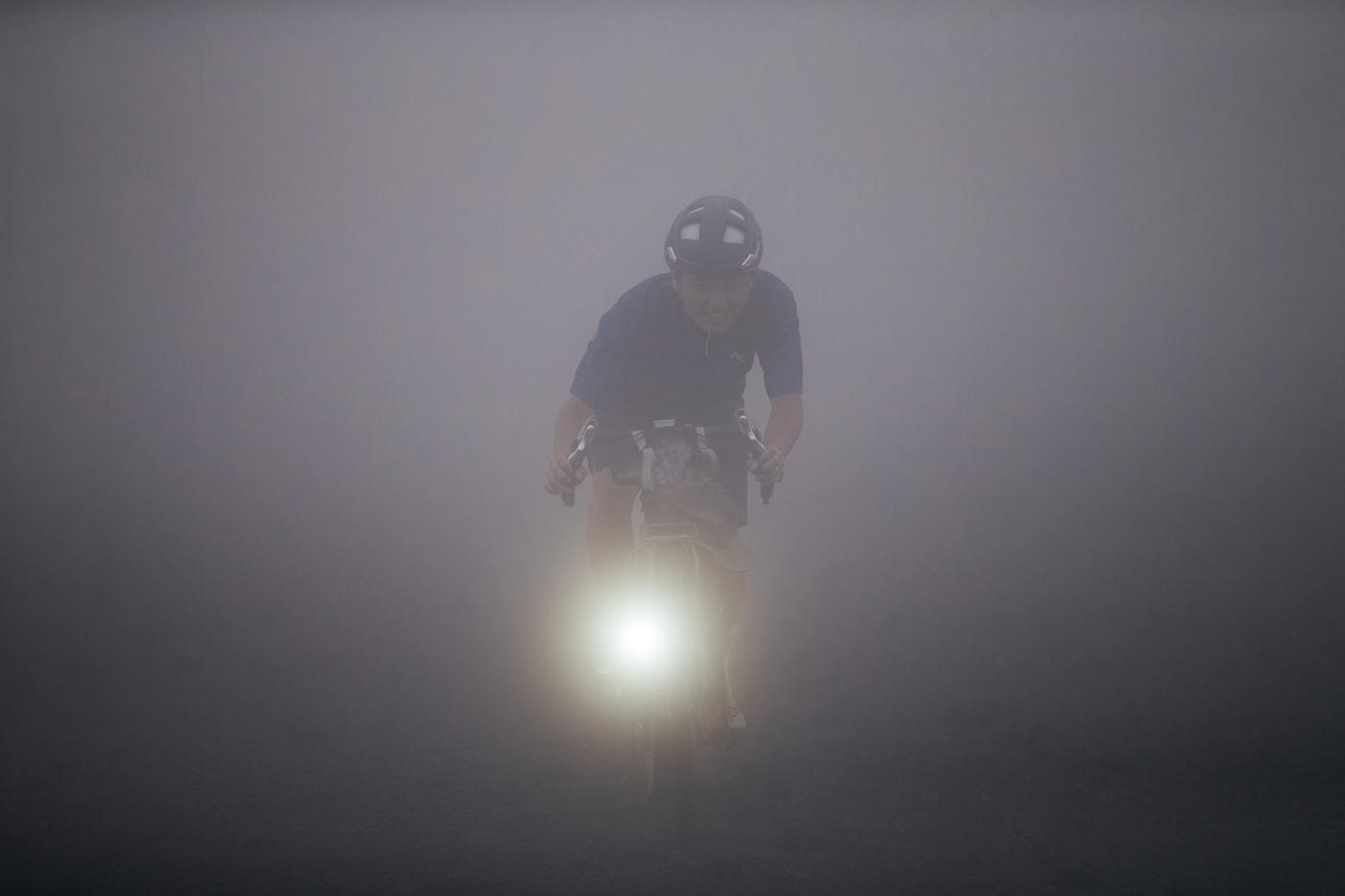 6 miles and 2,200′ later, we found ourselves at the top of Mihara, completely socked in by clouds. We fumbled about until our stomachs ached from lack of food and descended back to camp for dinner. The next morning’s itinerary finally was shaping up. The wet, cold and damp weather subsided for a brief moment as the morning sun fried the precipitation off our tents and warmed our sore legs over camp coffee. Once the light turned on enough for us to see the mountains, we realized the clouds were still encasing Mihara. Dammit! I wanted to visit Godzilla’s old digs! We discussed the plans for the day, packed up our bags and headed out for the same climb we had tackled the day before. I felt a little zippy, so I took off and waited for the group at the top, where once they arrived, I was filled in the news update that we’d be going up to Mihara once again, in hopes of having a clear view to one of Japan’s only “deserts.” 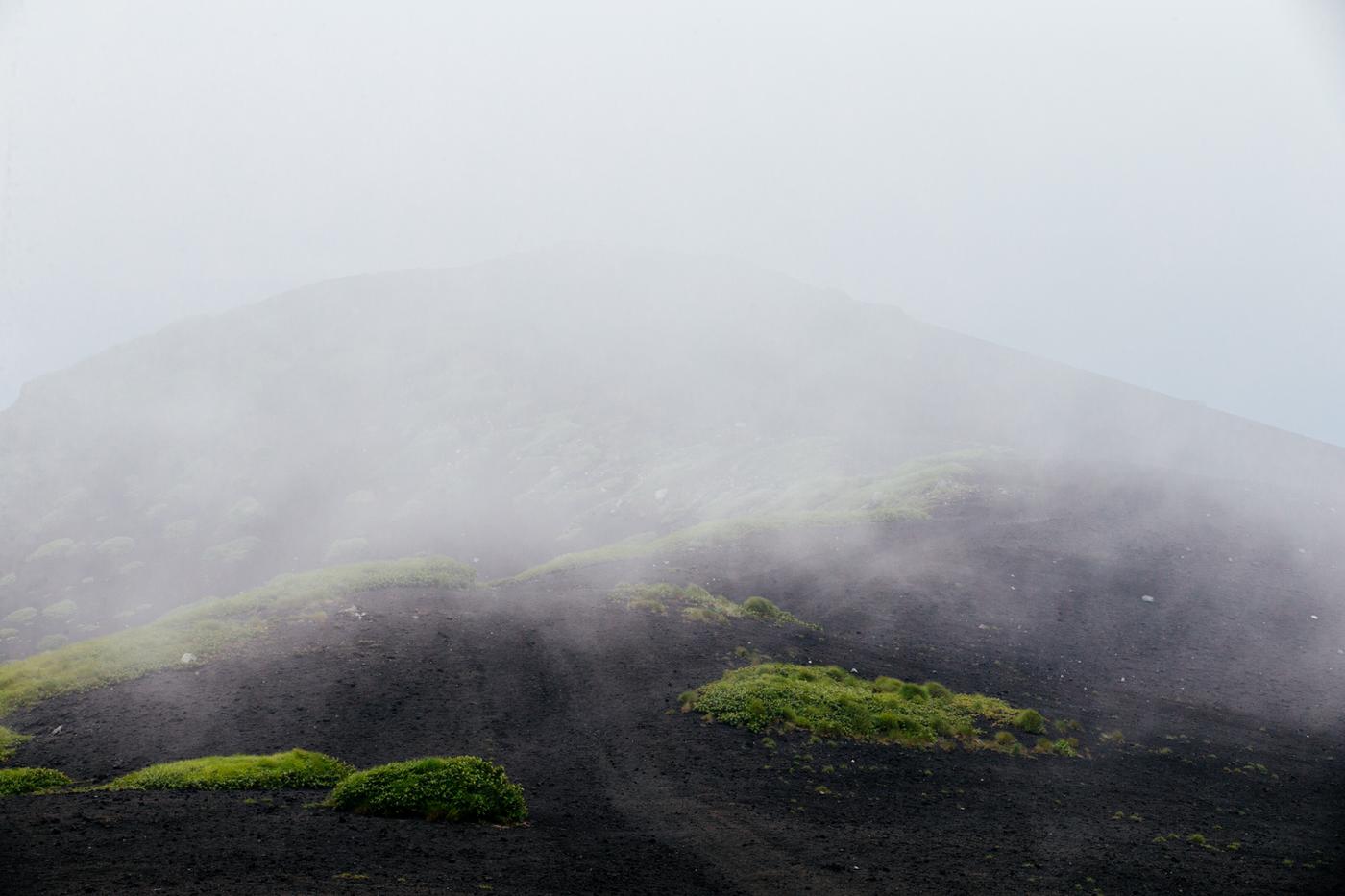 What awaited us at the top has got to be one of the most amazing sights I’ve ever seen on a bicycle. It was completely mind-melting and still, as I’m typing this, one bottle of Saké in, it sends chills down my back. 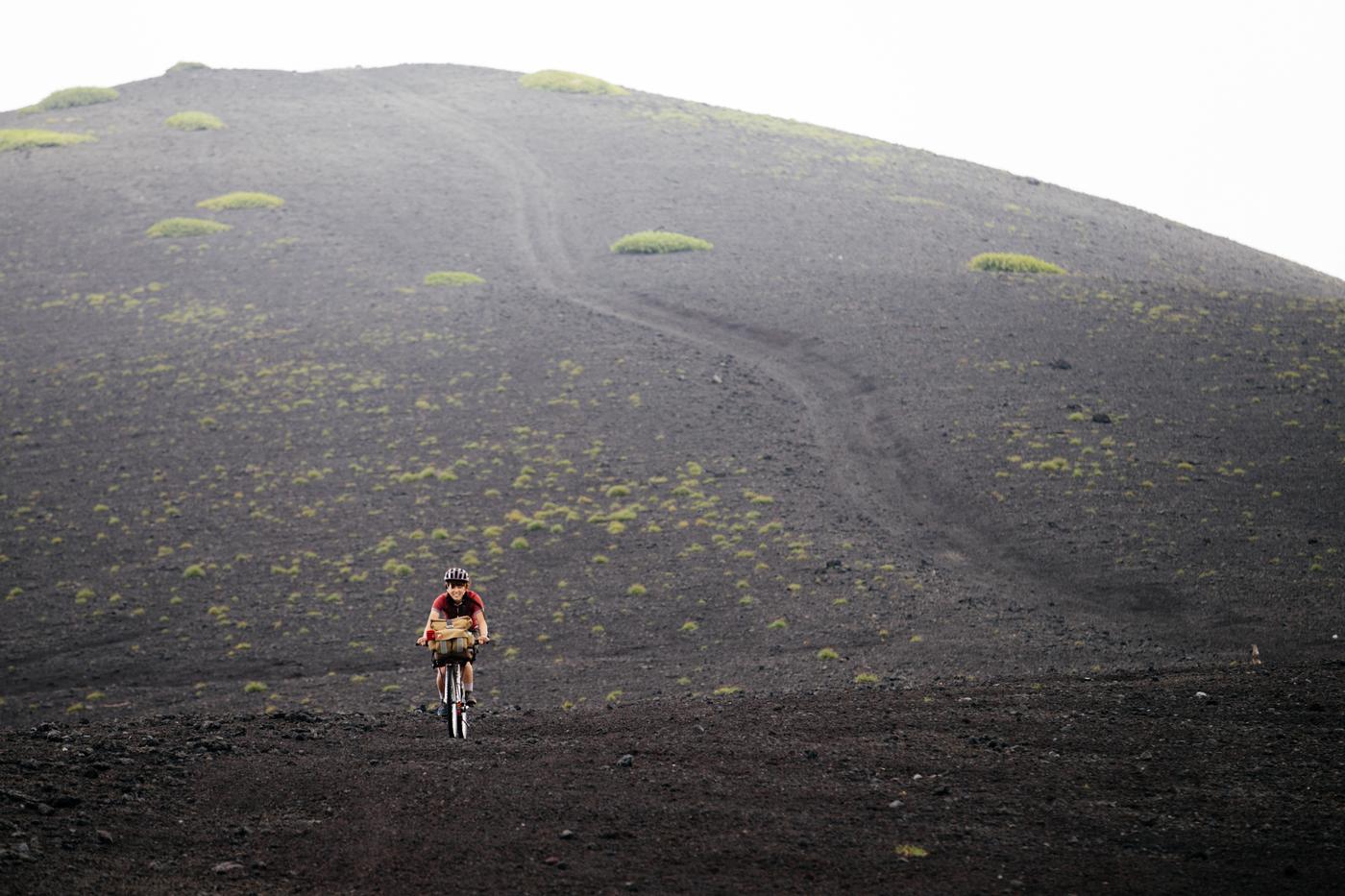 Climbing up the volcano was easy (and scenic,) yet coming down was interesting. Imagine riding a loaded bike through 8″ – 10″ of freshly crunched granola, or in this case, pumice stone. It’s unpredictable and trust me, it hurts when you hit it! We all made it down in mostly one piece and had one hell of a morning to talk about for the remainder of the ride to the port at Oshima, where a quick detour at the Goshinka Hot Spring awaited us. 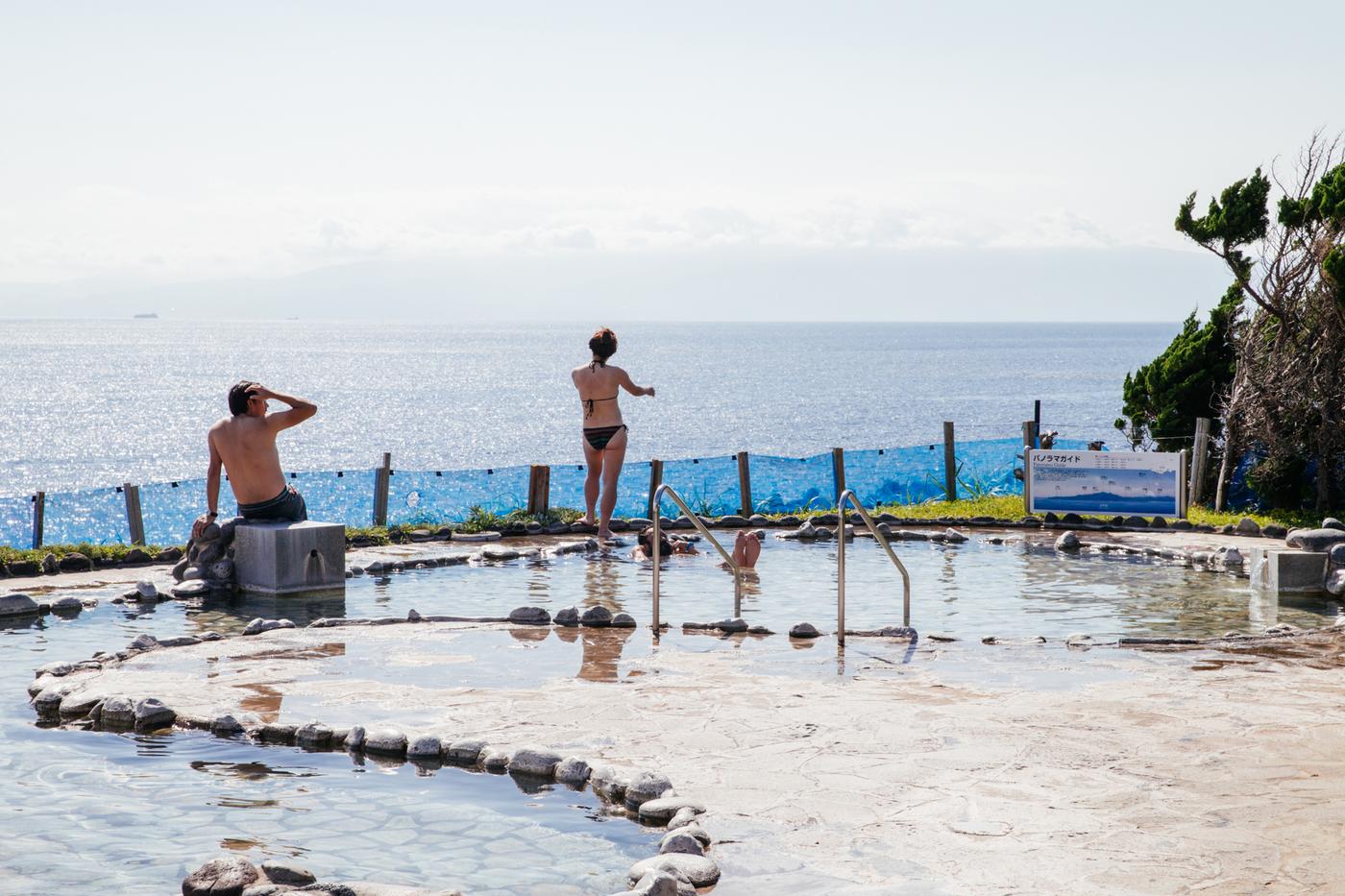 So, in the end, my lack of planning or research set us all up for a great surprise. I learned a lot about volcanic eruptions, their effect on the geographic and social environments, as well as pop culture and even got to eat some Godzilla Oshima treats! All that was left was another jet ferry ride and a Shinkansen jaunt back to Nagoya… 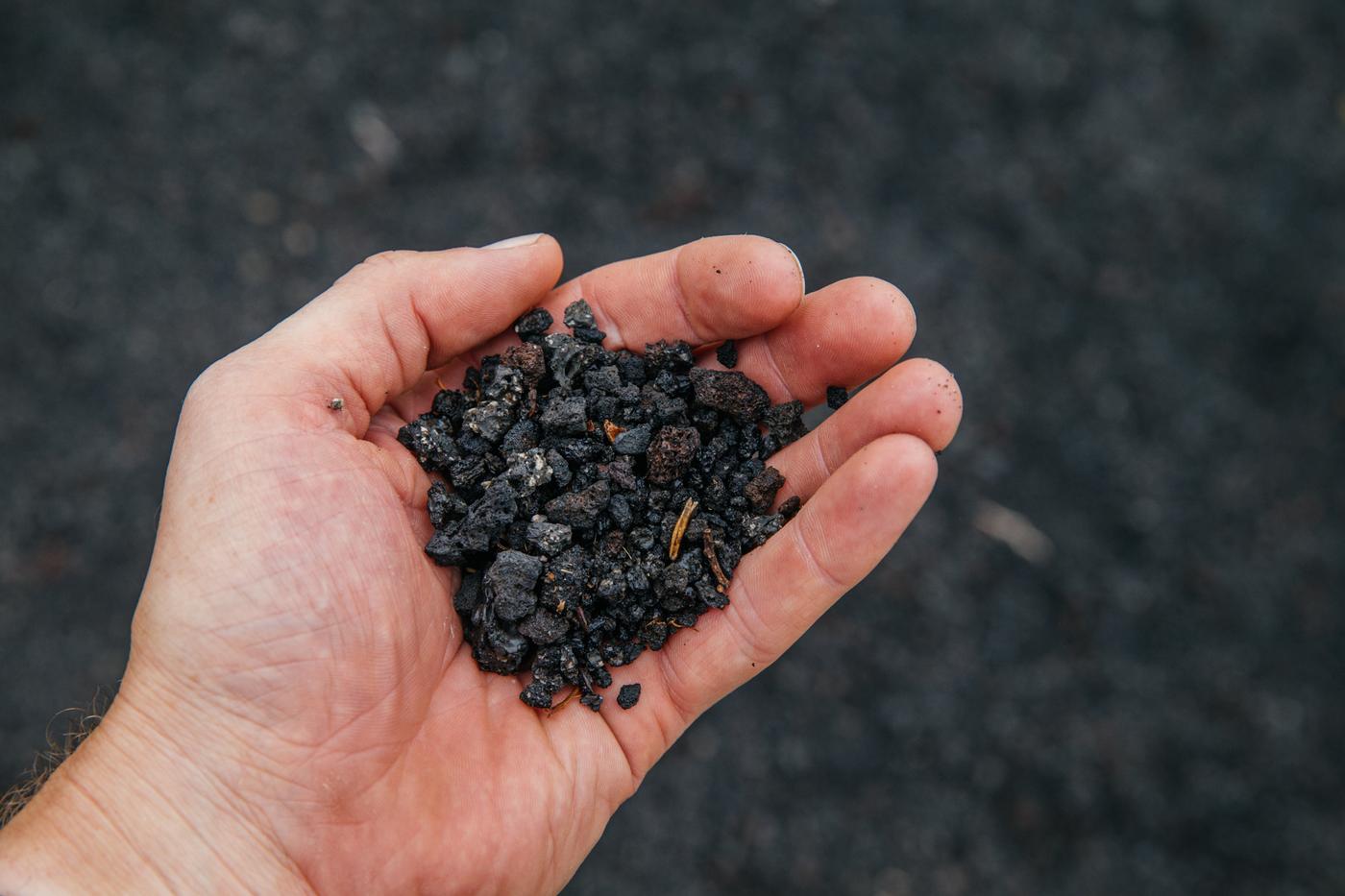 If you ever, ever, ever get the chance to do this ride. Do not miss out. It’s amazing and do your best to hit all of our little detours found on my Strava. Here’s Day 01 and Day 02, although maybe on Day 01 we could have ridden on the coastal road a bit more.

Many, many, many thanks to the Circles fam for putting this trip together. It was a literal volcanic blast! 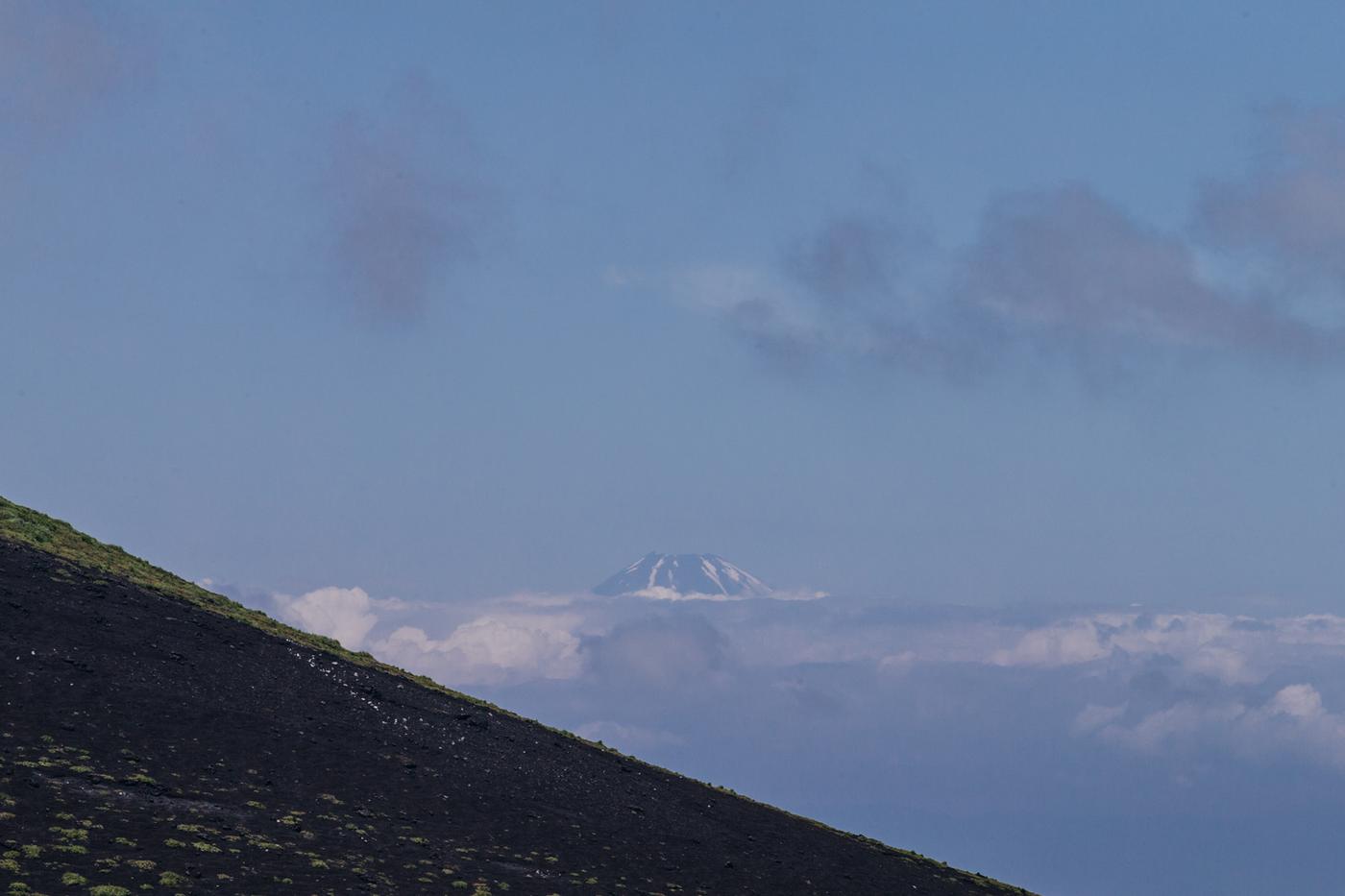 Oh and we finally saw the top of Mt. Fuji! … and I totally almost t-boned a monkey coming down from Mihara!