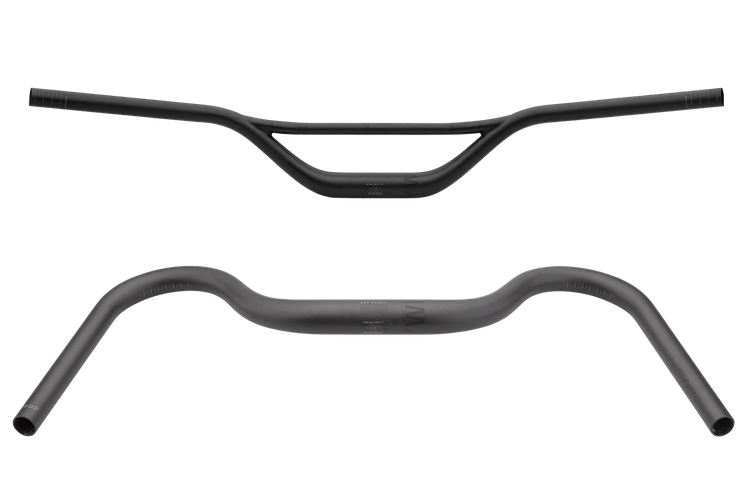 Whisky rolled out two new models of handlebars that surprised us! The Milhouse is a 825mm with carbon, moto-inspired bar with 8º upsweep, 16º backsweep, and the Winston is a 600mm wide carbon mustache bar with 73º backsweep. I’d say those bars fit right in within the Whisky lineup. What other bar shapes would you want to see?

Both of these bars are in stock now, so head to your local shop for ordering. 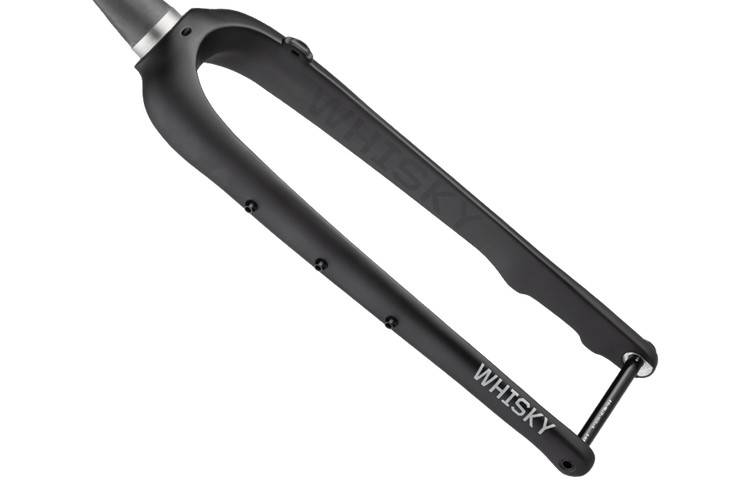 Whisky’s latest fork is their No.9 MCX “monster cross” fork which brings extra-wide tires, 700c x 51 mm or 650b x 61 mm (that’s 2.4”), to your corresponding frame. So how is this different than a MTB fork? Well, the MCX has a 415 mm axle-to-crown, minimizing the geometry effects. It’s also got 51 mm of offset, improving toe clearance with large tires or fenders. The MCX is within the Whisky CX fork family, with a 12 mm thru axle, and flat-mount brakes. There are also three-Pack mounts, dynamo cable routing, and fender mounts (700c x 45 mm tire clearance with fender) which add versatility for bikepacking and gravel riders. The newest fork to hit the shelves over at Whisky Parts Co will interest you 29r riders, particularly those who love the ride of a singlespeed rigid or just a rigid bike. The Boost MTB LT fork is 500mm long, clears a 3″ x 29″ or 27.5″ tire, has just the right amount of cargo cages, weighs 680g, uses IS disc mounts, and retails for $549.99. See more specs below and head to your local Whisky dealer for ordering! 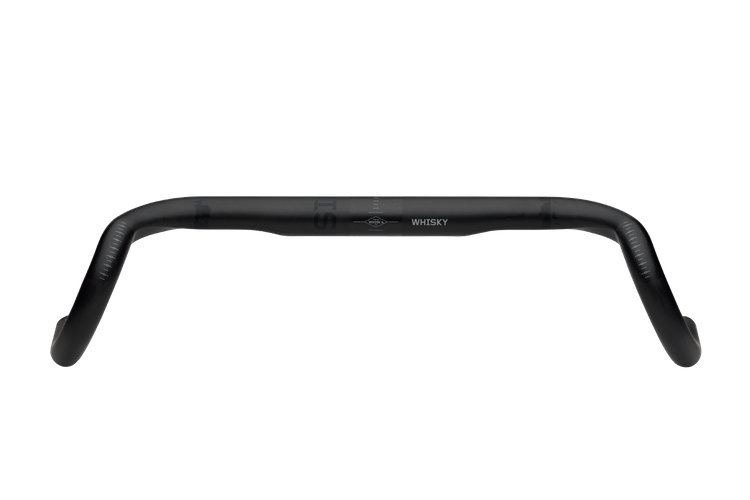 For those of you looking into swapping out your drop bars for something new, Whisky Parts Co’s new offerings might be of interest to you. The new No.7 aluminum and No.9 carbon bars come in a variety of shapes, thanks to the 6, 12, and 24º flair options, as well as widths up to 46cm. With the two material options, there’s something for any build, so head to Whisky to check out the details and your local dealer for ordering. 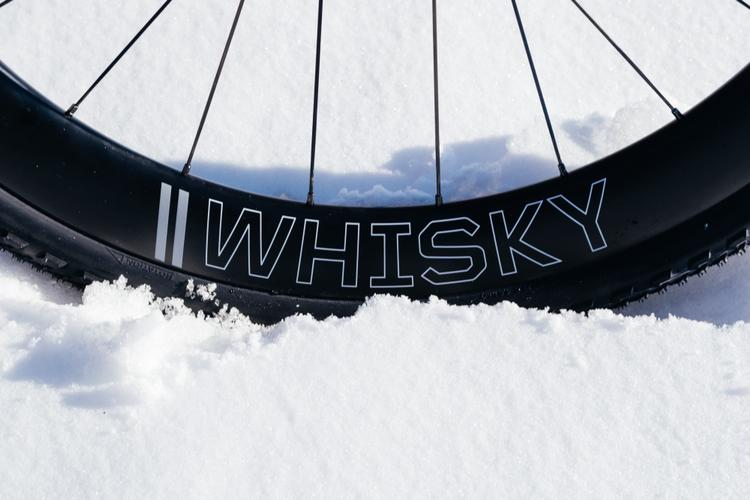 Private Stock. A term reserved the best of the best when it comes to distilling American whiskey, Scotch whisky, and bourbon. For Whisky Parts Co, a brand within the umbrella that is Quality Bicycle Products, their aim is to design the best parts possible and get the most people using those parts as possible. Part of that comes from OE sales and the other brands within QBP using Whisky Parts when it makes sense, yet there is a growing demand from Domestic and International frame builders, to create products specifically for niche market requests. We’ve seen Whisky do so with their road, cross and mountain forks, as well as their wheels and components over the years.

For Ben Witt, Whisky’s marketing and sales director, he felt the need to not only embrace the niche market of frame building, but to use the parts for two of his own bikes; a Rock Lobster all-road and Steve Potts dirt drop mtb. We’ve seen a number of Private Stock builds from the Whisky team here on the Radavist over the years, but these two are some of the best.

Thanks to Ben for taking the time to let us showcase these bikes and Kyle for the great photos! My fingers are cold just typing this up! As we’ve seen on the new All-City Mr. Pink road bike, Whisky Parts Co have developed a carbon road fork for 1 1/8″ head tubes with integrated and hidden fender mounts, allowing you to either lighten up your existing road bike, or finally put that lonely frame in your garage to use. Best of all, in my opinion is the fork will clear 35mm tire on a 700c rim or 47mm tire on a 650b rim through utilizing a long reach caliper. The No7 fork has no rider weight limit, a 5 year Whisky warranty and is rated for ASTM Condition 2. Which translates to off-road riding and jumps less than 12″. The No7 retails for $399.99. See more details at Whisky and holler at your local bike shop for ordering. 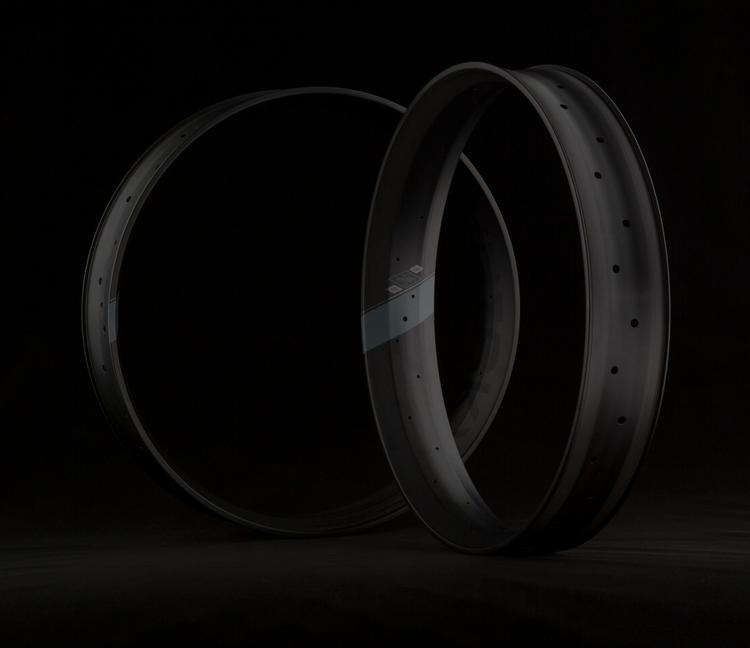 Having a set of lighter, stiffer fatbike wheels really does make a huge difference in not only overall build weight, but ride quality. Whiskey Parts Co. introduce their new No.9 100w carbon fatbike rim, weighing in at 735g a piece, these new rims utilize a hookless sidewall and a Whisky-designed TBLS bead profile. This results in a stronger sidewall with more impact resistance. Retail is $649 a rim and the No.9 100w is in stock now at QBP. See more information at Whisky and full specs below. 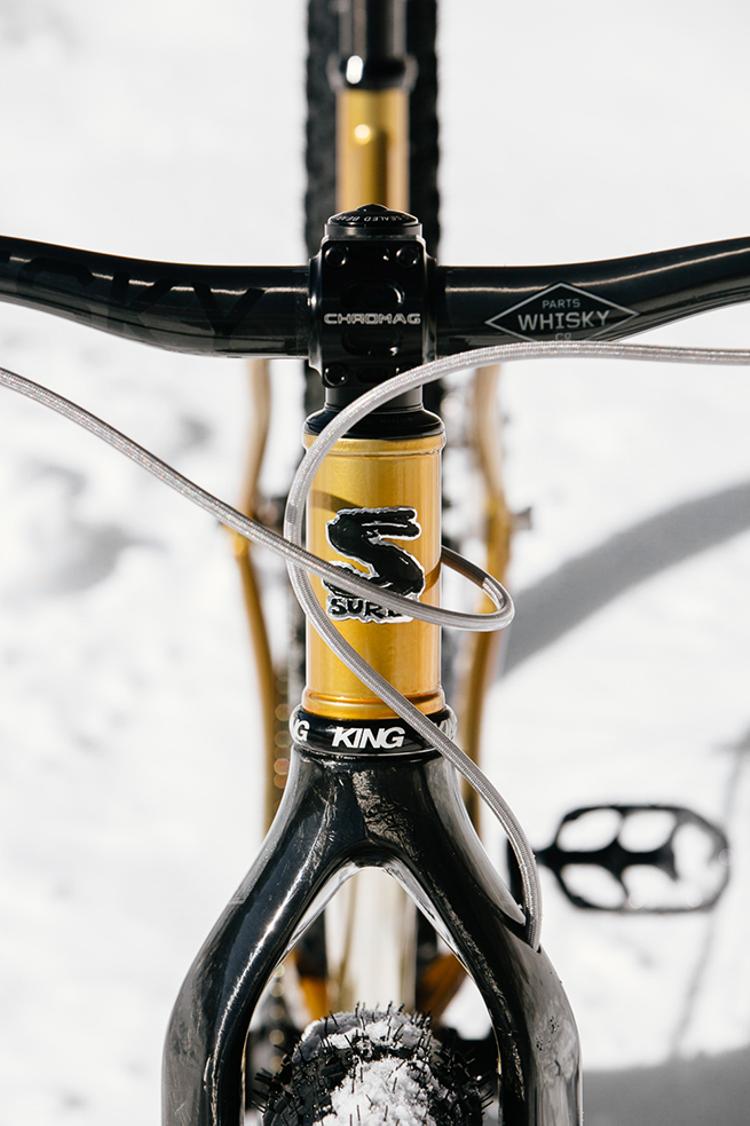 I love how you can take a frame that’s very accessible and affordable, strip it, then paint or powdercoat it. From there, you can either rebuild the stock kit, or build it up with choice components. For Matt at Whisky Parts, he did the latter.

Matt put a Whisky fork, bars on the front, a Whisky seatpost, Chromag stem, saddle, Industry Nine wheels, Middleburn cranks, HOPE pedals, Hope brakes and a Chris King bottom bracket. The all black component list just makes that gold powdercoat pop! I think this bike was my favorite at Frostbike and I gotta tell ya, it makes me want to do something rad with my Pugs… 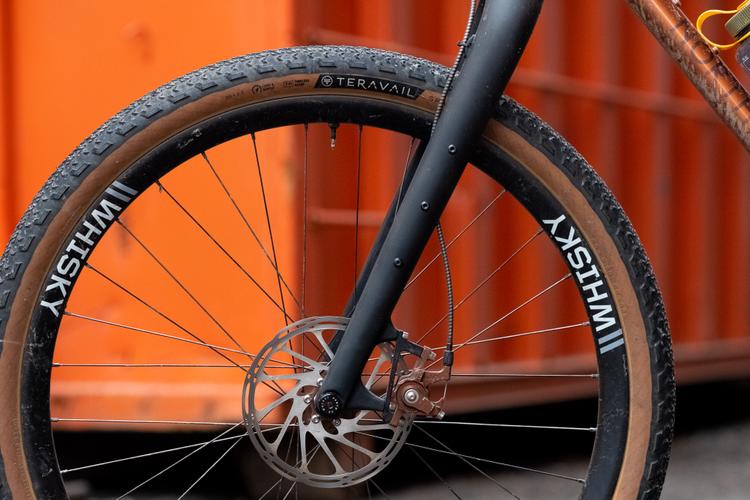 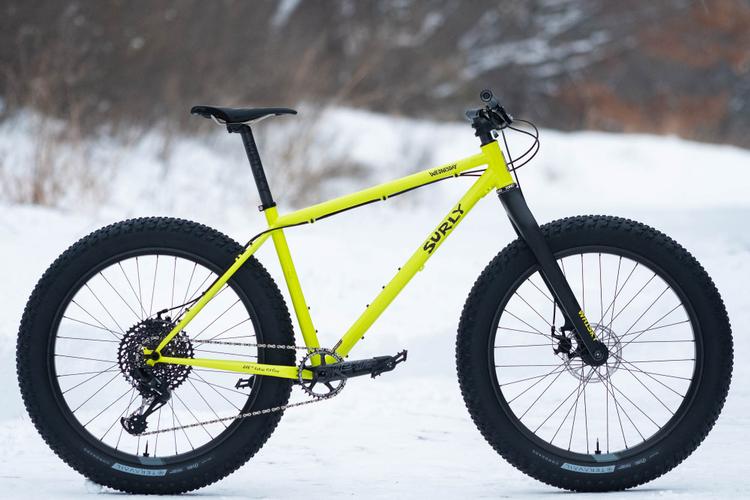 Frostbike 2019: Three Shots of Whisky With a Carbon Back
Photos and words by Jarrod Bunk

Whisky Components chose Quality Bicycle Products Frostbike to unveil some new products this year, and along with it, they proved that the sum of a well-appointed bicycle is in its parts.  With three unique builds designed around a Surly Wednesday, Surly Karate Monkey, and Surly Midnight special, all shod in a certain shade of retina burn that when entering the expo halls was sure to catch your eye.

There’s much more going on than at first glance, but the paint/carbon combo worked out really well, I’ve been told the Wednesday weighed under 27lbs. 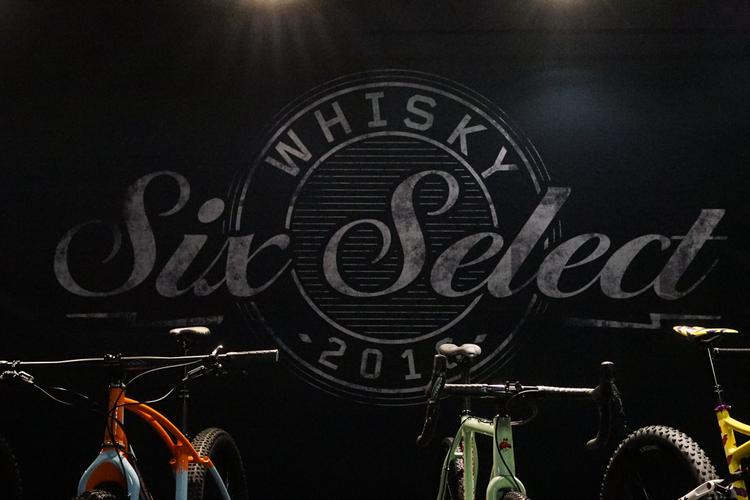 Each year at Frostbike, Whisky builds bikes, both custom from frame builders and production from one of the QBP brands. This year Whisky had six builders and brands at the Frostbike booth to show off their new rims, bars and seatposts. Dubbed the Six Select, the collection debuted a variety of veritable dream bikes, including: Rock Lobster, 44 Bikes, Retrotec, Moth Attack, Salsa and Engin.

Do we really need to be reminded that fatbikes are fun to ride year round? I don’t think so. Do we need a video showing them being shredded on some fun and flowy trails? Hell yes. See more on the NO.9 70mm rim at Whisky.

Matt just fired over some photos of his 2009 NAHBS RetroTec Cycles RetroFat SS, retrofitted with the new Whisky 70w Fat Tubeless Rims to Industry Nine hubs… the consensus? I dig it, especially the color, the Cambium and those Surly Nate gumwall tires.

I think it looks like a ton of fun and if you’re going to Saddle Drive this year, you’ll probably see it mobbing around.

Check out a few more photos below! 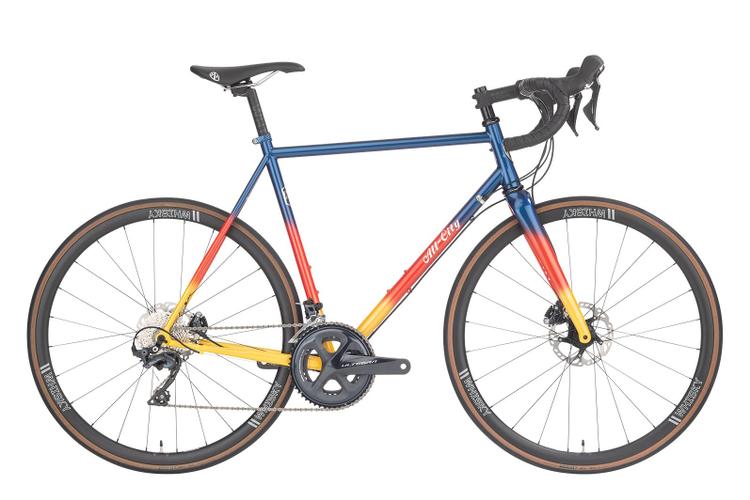 All City’s newest road model, the Zig Zag has two new build kits this year, a 105 with blue fade paint and this insane “Sunset Glow” model, laced with Ultegra and Whisky Parts. The geometry remains the same but with an upgrade like that, we’re not complaining. Head to All-City to see more. 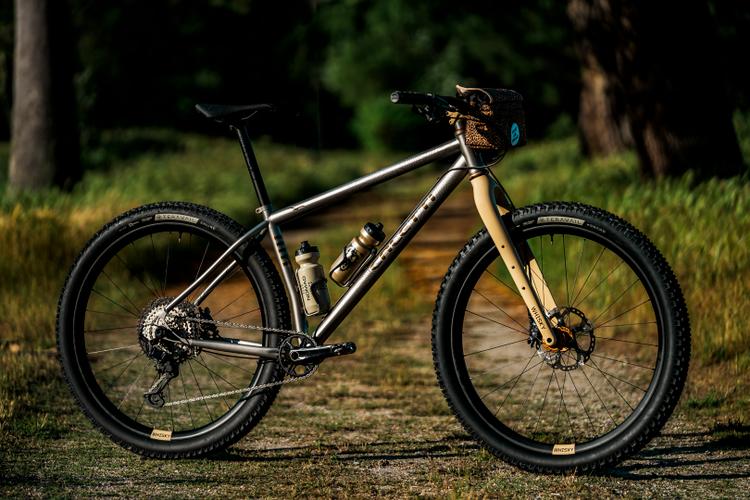 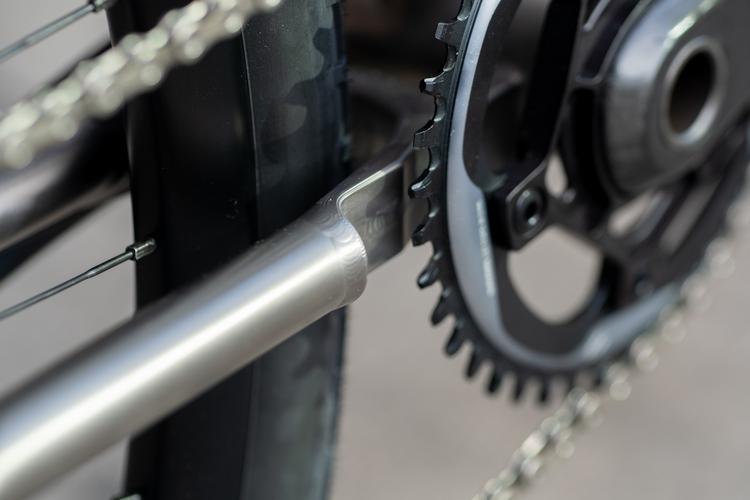 Drew over at Engin is a bit of a problem solver, he also happens to be a machinist as well as a frame builder creating solutions such as a 5bolt CNC Spider allows for easy access to ring swaps that the stock configuration didn’t allow, a CNC two-piece yoke that is welded together to add clearance for both 700x47c tires and a 34/50 double crank, even though this bike is built as a 1x.

The left shifter is converted to actuate the dropper post, something that Engin thinks is going to be the next big thing to bridge the gap between an all-road bike and the MTB.  With a build of Whisky Parts Co No9 rims and fork, White Industries hubs, and a full SRAM Force 1x kit, this bike surely blurs the lines of a fast road bike that still rips off road.

Damn. The newest from Milwaukee Bicycle Co is a head turner for sure. The Mettle is their new and improved disc cyclocross bike. It features a tapered head tube, large diameter top and down tubes, stainless disc dropouts, a stainless stay protector, Whisky parts fork and a slick, classic paint job. These frames are made in the USA by Waterford Precision Cycles from True Temper OX Platinum Tubing.

Seriously, this bike looks amazing. Head over to the Ben’s Cycle Blog for more information and contact Milwaukee Bicycle Co for ordering.

Cross is coming but this thing wants to shred trails now! 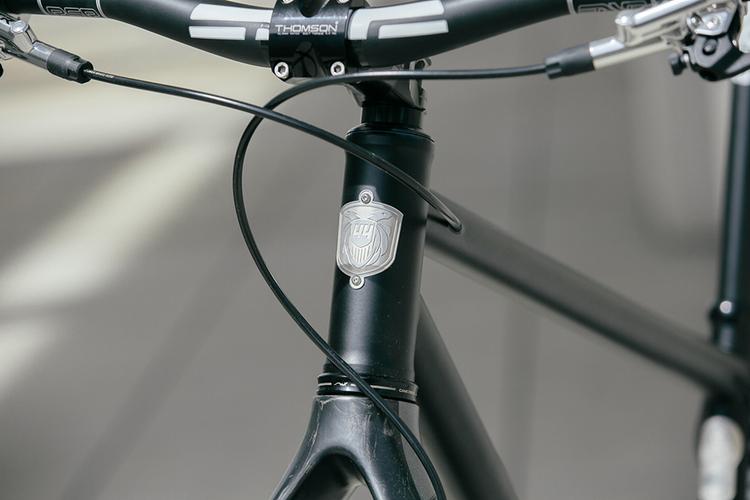 This NAHBS I learned two things about 44 Bikes. The first being Kris and I are the exact same size – which comes in handy for any planned trips to New Hampshire I might have to make. Second, Kris doesn’t build anything that he can’t or wouldn’t ride himself. Although, I suppose if someone really wanted a road bike, he’d make an exception.

Regionally, the roads surrounding Kris’ shop and home are quite shitty. Rutted, washboarded, washed-out and rocky, the tracks and trails take quite the beating throughout the winter, so his bikes are tailored to this terrain. For NAHBS this year, Kris brought all three of his own bikes to show off, because, well. It just makes sense.

Here’s the show favorite from his booth: a murdered out singlespeed 29’r with a nice, fat Whisky Parts fork, Industry 9 wheels and a rear end so tight that it’d be hard to… No, wait, it’s so black metal that… Anyway, I digress.