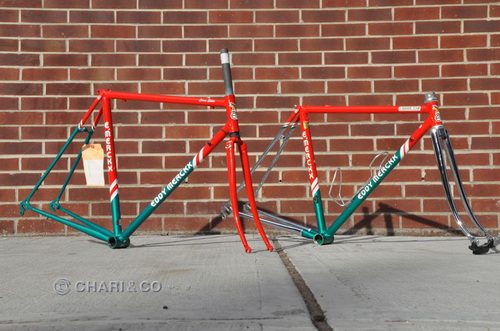 without looking below, which one is the re-issue?

Chari & Co just got in two 7-11 Eddy Merckx framesets. The one on the left is the reissued Corsa Extra (most likely SLX) and the one of the right is the original, made from Columbus TSX or SLX (depending on the year and frame size). The major differences are noticeable right off the bat. The original 7-11 had a flat crown fork and the reissue had a sloping crown. The rear triangle on the original is also chromed, whereas the reissue is not; most companies had stopped chroming bikes in the later 90’s. The original had Eddy Merckx stamped on the fork ends and dropouts whereas the reissue has Campagnolo.

Overall, it’s a good example of a re-issued classic. Read up more on the 7-11’s history at last week’s Merckx Mondays.