Last year, Rue propositioned me about helping her document the Tour Divide race in which Lael Wilcox intended to best her previous record, I jumped at the opportunity. Later, Jay Ritchey would be added to the team to help Rue with the film they intended to produce about the race.  I was tasked with focusing on photographing her attempt and the race itself.  Rue has been flipping between photo and video very deftly and has some incredible images to add to this gallery.  Here is the second installment of our ongoing coverage of the 2019 Tour Divide Race. We woke up a little late on Monday morning to see much of the front of the pack had pushed on toward Helena. We caught Dylan and Kim rolling into Lincoln, MT. Dylan pulled over at a popular gas station and remarked that he couldn’t seem to keep enough food in his system, his cargo bibs were brimming with snacks. Kim turned off and pushed on over Semple Pass toward Helena. At this point, we drove past Helena and straight to Butte in hopes of catching Josh Kato who was holding onto Sofiane’s breakaway. Just outside of town we caught Josh, the 2nd place rider, just as he passed under a train bridge. We then tried to drive around to catch Sofiane before he reached Wise River. In a dead cell phone zone, we only had trackleaders info from 30 minutes earlier. We set up shots but no one ever came down. After almost 30 more minutes we finally found his tracks and realized he had passed. In places where we don’t have service, we are literally looking at tire tracks in the mud and dirt in order to see who has passed through recently. We go to town and get enough service for an update; it looks like Josh Kato is almost on his way down, so we head back to the course. After almost another hour no one rolls through, I get some amazing shots of street and telephone posts, but no riders. We spend the night at Wise River in a cabin that the local bar rents out. 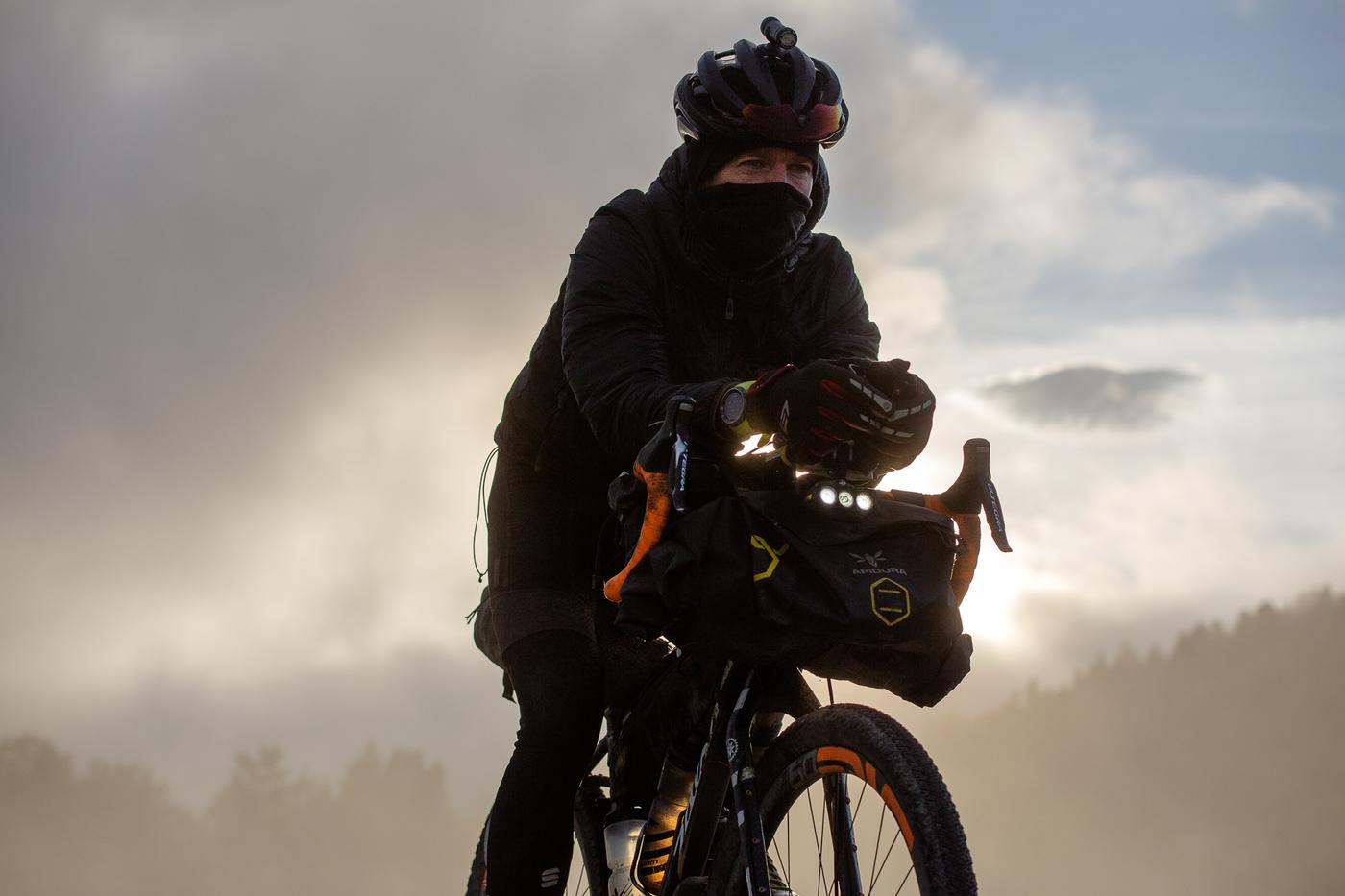 Day 5 Back and Forth

We wake up at 6 am and as we check-in with trackleaders, we see Steve Halligan quickly approaching the town. It is a cold and foggy morning. We see Steve coming down the road looking like a ninja all wrapped up in as much gear as possible to stay warm. We double back to the bridge we tried to shoot the past evening, and not long after Lael comes rolling down the road, similarly decked out in all the down puffy gear she has. Luckily the store in town is open early and she is able to resupply, bad news though, the store was out of milk, half and half will have to do. After Lael rolls up the road over the next pass we catch Josh Ibbet sitting down for a proper breakfast at the Wise River Club. He remarks that “He just wants to finish at this point.” He is continually keeping a strong pace nonetheless, he and Lael have been leapfrogging for the past few days. We decided to make a long drive ahead on the route to try and catch Sofiane Sehili who is in first; we haven’t seen him since day 2 of the race. We post up in Lima, MT, a gas station resupply before a long stretch into Idaho. Jay and I take off on the e-bikes to head him off as he comes into town. We parallel him on a frontage road toward town as he checks in on social media resting on his aero bars. The internet has been abuzz since Sofiane is not wearing a helmet to which he remarks, “Everyone says I should wear a helmet, but I haven’t crashed yet.” He seems very collected considering the small amount of sleep he has gotten in the past few days, he tucks back into his aero bars and we peel off onto another road. In town we meet Larry who is riding northbound back home to Missoula on a Salsa Blackborrow, he mentions that he skipped all of Colorado due to extremely high snow levels. Sofiane arrives in town and we watch him inhale a few hot dogs and he is off as quickly as he came. After catching the leader again for a moment, we double back on the route to catch some riders farther back that we fear we won’t see again as the head of the pack pulls ever more ahead. We head up the massive descent off Table Mountain toward I-15 and wait for riders to come our way. Dylan Morton passes us with his cargo pockets ever filled with snacks and the two top single speed riders, Nico Deportago-Cabrera, and Alexandera Houchin crush up the final hill before the screaming descent. We rally to catch them on the other side of the next pass near Wise River and post up at our now very familiar spot near the river. As the light fades we continually reposition waiting for riders to pass, waiting, waiting, and waiting. Finally, as we start to head back toward Butte for the evening we see a light coming down the trail. It is Jason Kiefer followed by Nico and Alexandera. They stop and start discussing Jason’s recent crash up on the pass, his bars are bent, his phone is destroyed, and his GPS device is gone forever. After some discussion, he decides to pedal back on the road toward Butte to repair his bike. He has to pedal back, repair his bike, and rejoin the route in the exact place he departed or risk disqualification. Alex and Nico take off toward Wise River and pledge to keep an eye on his dot, Jason tucks into his aero bars and heads back to Butte. Turns out even the staff at the Comfort Inn and Suites is watching the dots and were aware of our coverage of the tour. We head to the continental breakfast and I see a racer in lycra scarfing down as much food as possible, we exchange a brief glance. Since we doubled back yesterday evening we have another large drive to Idaho to try and catch the front of the pack again. We catch Lael trudging through the loose volcanic soil multi-use path south of Island Park. As we are driving down the road, I quickly catch a glance of a train bridge near the Warm River, which I had slept at years ago on a personal ride on the Divide. Up the trail, I find Lael passing a group of equestrians, trying not to spook the horses she was forced to dismount. She remarks about how shitty the last part of the trail was but is super stoked on the current path. We leave the road along the Warm River and head into the plains that roll until being abruptly disrupted by the Teton massif. Signs warn of road closures along Reclamation Road and we hear about deep mud from fellow people on the road. We catch a shot of Lael heading up the pass toward Wyoming. As we descended to begin our drive around the mountains, we catch Josh Ibbet and Even Deutsch pedaling through farmland, it’s quite rare to catch two racers so close at this point in the race. 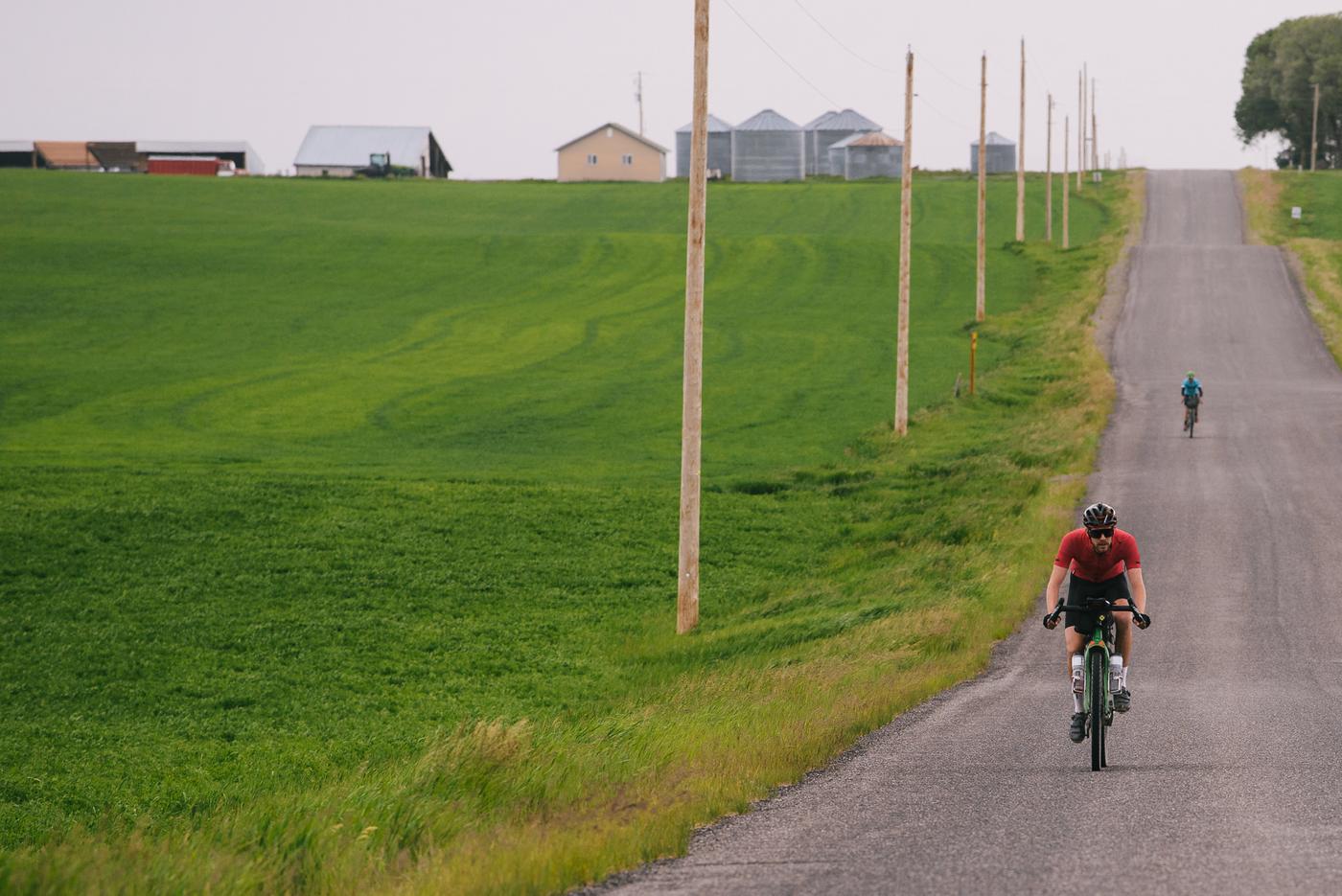 Our reroute has us driving over Teton pass toward Jackson, this will take us through Victor, ID home of Jay Petervary. Before this trip, he had been a vocal opponent of our documentation of the race. Rue had talked about the possibility of doing an interview to address his concerns with the documentation of the race before we took off from Banff. We weren’t sure if we would have time to make it happen, but with the reroute, we couldn’t pass up the opportunity. Rue called him and he happened to be home so we swung by. We set up a video interview in his garage filled with his extensive collection of bikes and gear. We will be producing a behind the scenes video on how we made the film and photographed the race, the interview with Jay will be a part of that, stay tuned. After crossing the pass to Jackson we realize it’s going to be an incredible sunset over the Tetons, we book it for Moran junction to catch racers as they come around Jackson Lake. We nervously drive up the road watching the amazing light shift and morph the clouds hanging over the range. Finally, we see a light in the distance: Lael. We scramble to catch what shots we can in the fading light. We all notice that Lael has picked up a sleeping pad since we saw her last, it seems like the nights have been quite cold this year. Shortly after Evan Deutsch comes down the hill behind her and they both begin the long slog up Togwotee pass as night falls and a storm rolls in. We turn off the route and head toward Pinedale, WY in hopes of getting a little ahead of the pack, we would barely beat Sofiane there…