When I originally spoke to Eric at Inside Line Equipment, I never thought anything would come from it. After he saw my initial design sketch for a DSLR roll-top bag designed for cycling, he felt like it was too ambitious for his capabilities.

Weeks passed and I received an email from Eric, telling me he had something special for me to review. After I posted about it, he got flooded with orders and I got flooded with emails asking what I thought about it. Not wanting to jump the gun too much, I decided to give the bag a good amount of field testing. Well, I’ve had the bag for three months and it’s about time for a Well Used critique.

Check out more of my review below! My concept for the pack was executed perfectly. When I roll up to a spot, I always place my bag on its back and I wanted to access the DSLR case from this position. 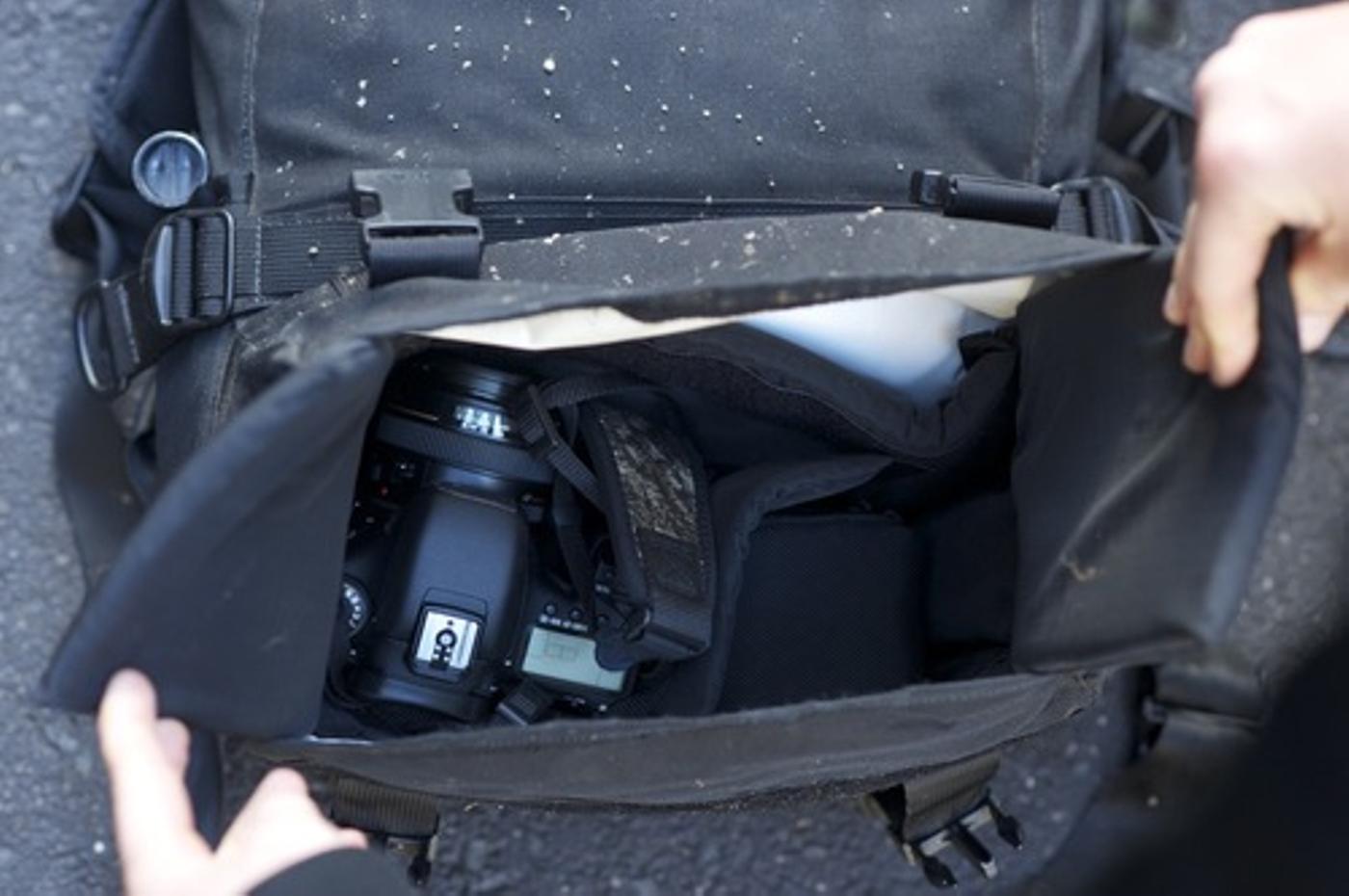 As you can see, it opens up wide and is easy to access. After a few days of testing, I told Eric that I thought the padding could be a little thicker and the DSLR case could be twice that size. As it is designed currently, it’s about 70% traditional rolltop and 30% camera bag. I want it to be reversed but that doesn’t mean everyone else would as well, so he’s making two models. The current model will fit a large DSLR body with a battery grip and a prime lens attached, as well as another lens and a flash. I usually carry my 7D with a 50mm attached, along with my flash and my Canon 24-70mm f2.8 L (a rather hefty lens). The rolltop storage is big. Very big. Inside I usually carry my bike tools and any extra lenses I might have inside a separate case, which is why I’d like more camera storage. When I travel though, it’s perfect for a weekend trip. I can fit all my clothes, a laptop and all my camera equipment in it. Believe it or not, it fits in the overhead bins on airplanes. Boy is this bag big! But it’s not overly bulky, especially when compared to other bags with this amount of storage. The long and rather thin profile sits on your back without swaying, even with a tripod strapped to the side. Measuring in at 13″ x 22″ x 8″, it’s great when full loaded and half empty. You can cinch it down when you’re only carrying a few things, making it easier to carry. Which reminds me, there are two tripod / light stand straps. And all the straps keep it secured. I’ve climbed and bombed hills in SF with it and spent numerous days with it packed without any issues. Even on the day we shot these photos, I had it on for 4 hours while on the cross bike. Tons of storage, comfortable on the bike, handmade in the USA and customized colors. What more could you want in a cycling-friendly DSLR bag? Oh and it’s 100% water (and mud) proof. I’ve been in torrential downpours multiple times.

I can’t wait to check out the next model! Once I get it in the mail, this one is going out to other blogs to review. So how much does this bag run? $360. Not bad at all, considering the amount of detailing that went into it. I’m very, very impressed with Eric’s abilities as a bag maker and would highly recommend this!

Thanks to FYXO for the photos!