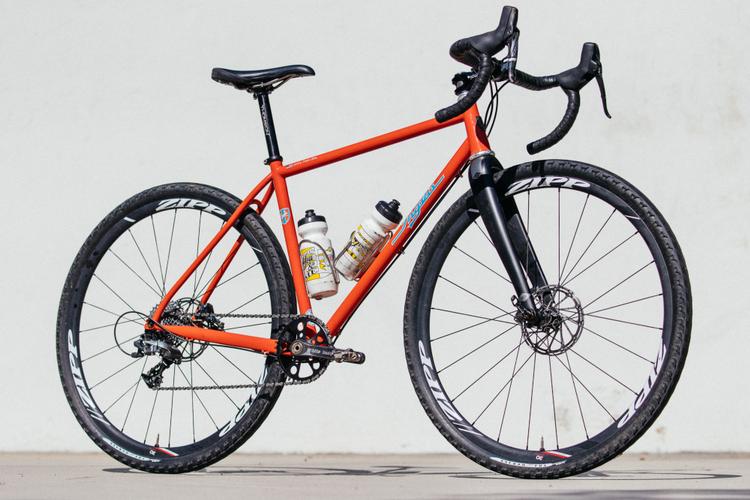 I’ve yet to see many Inglis Cycles in person. Usually, I run across Retrotecs in my travels and it doesn’t matter where I am in the world, there will always be a Retrotec somewhere. Since moving to California, my interactions have doubled, if not tripled. That said, I’ve maybe seen one or two Inglis Cycles in person. So what’s the difference? Well, it should be obvious to the trained eye. Retrotec Cycles feature classic automotive motifs. Checkered badges, colors inspired by classic cars and swoopy, sometimes double top tubes, with bent stays. Retrotecs have been compared to looking like classic cruisers from the Stingray-era Schwinn factory, while Inglis Cycles are more straight forward, less swoopy but still made by Curtis Inglis in Napa.

Here’s where Kobi comes into play. He’s Curtis’ intern. After building a frame for his senior project, Curtis asked him if he wanted to help him out in the day to day operations of Inglis / Retrotec Cycles. Kobi has raced ‘cross on this bike, he’s crashed the bike and ridden it all over California. While Kobi was in town for FYF, I photographed his bike at Golden Saddle, where I gave him directions to ride Mt. Lukens. Let’s hope he got out to climb the highest point in the city of Los Angeles, topping out at over 5,000’.

We’re live-streaming the Q+A with Curtis Inglis right here on the Radavist. At 6:30pm PST, tune in at the video above…