This year, more so than years past, I got to document Beautiful Bicycles around the world. From Melbourne, to SF and NYC, track bikes, road bikes and even fixed freestyle bikes found their way to the other side of my lens. When I decided to make my top 10 list this year, I knew I had to find an unbiased way of judging from my posts. After looking at them all, I decided Facebook “likes”, Tweets and comments were the best way to judge. Each of these bikes were broken down on a spreadsheet and I can say with confidence, they’re by far some of my favorite bikes of the year.

Without further ado, here’s my Top 10 Beautiful Bicycles of 2011! After shooting photos at the Rapha Gentlemen’s Race in Portland, I admired this blackened steed as it laid against the wall of Jeremy’s laundry room. Untouched from the afternoon’s events, the largest critique that was brought up in the post was the naked big ring. It’s the last time I’ll ever post a bike in the small ring, even if the bicycle’s rider logged more miles and climbed more elevation that afternoon than any of the snarkey commentators. 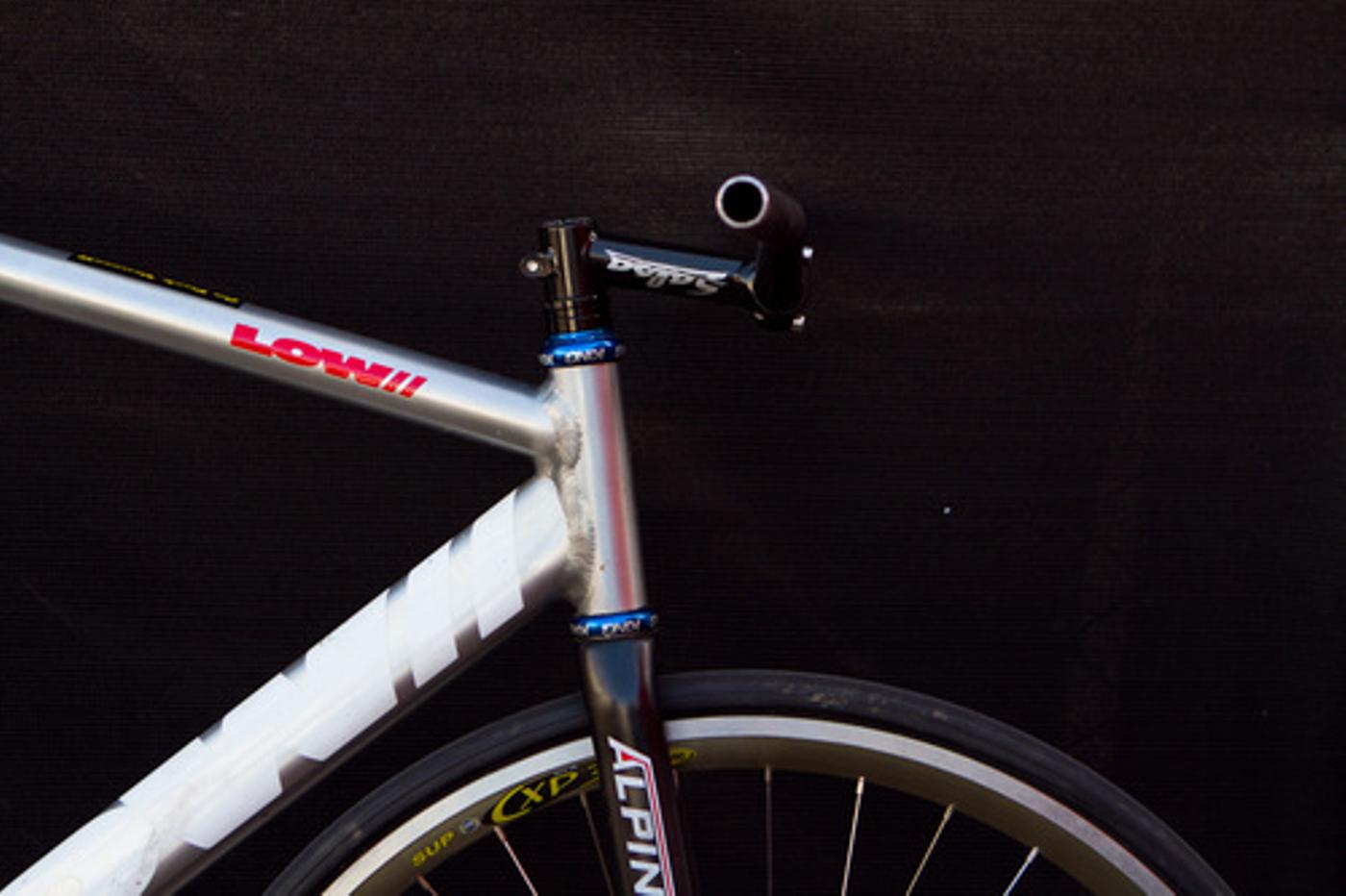 This was taken during my first “real trip” to SF. I had been there before but never had a bike on me. When Chas first emailed me about Low Bicycles, I was stoked to see a manufacturer pushing aluminum track bikes, in the Bay Area nontheless. Andrew Low is one of the only people in the States still making aluminum track bikes and Mark’s is a key example as to how they do it in SF. My time in Melbourne created some of my best posts for 2011 and presented me with the most beautiful track bikes I’ve seen in years. It was like a plane carrying a shipment of NOS Campagnolo Pista parts crash-landed outside town or something. Ben’s Mazza MAX track bike is sure to catch your attention with its neon livery. If you searched the site for Geekhouse, you’d be surprised how much I documented their endeavors this year. I love their mix of old school Boston fabrication and new school flavor. You just can’t beat this custom Indonesian track bike as it’s being embraced by the spring time Cherry Blossoms. I first saw this bike being raced during Monster Track in 2006 by Sasha. Sure, it was born for the Keirin but it’s now a street machine. Chipped paint, a few dents and a stellar build makes this one of my favorite Beautiful Bicycles of the year. What? You thought there wouldn’t be a fixed freestyle bike in the top 10? Tom’s Vic Murphy-inspired P-Fix was a smashing hit when he came down to Texas with Tony to ride. So much so that after seeing my photos, Fast Company wanted the frame to display at a forthcoming exhibition. But the real reason the community embraced this bike was because Tom switched from 700c to 26″, to ride exclusively for Specialized. 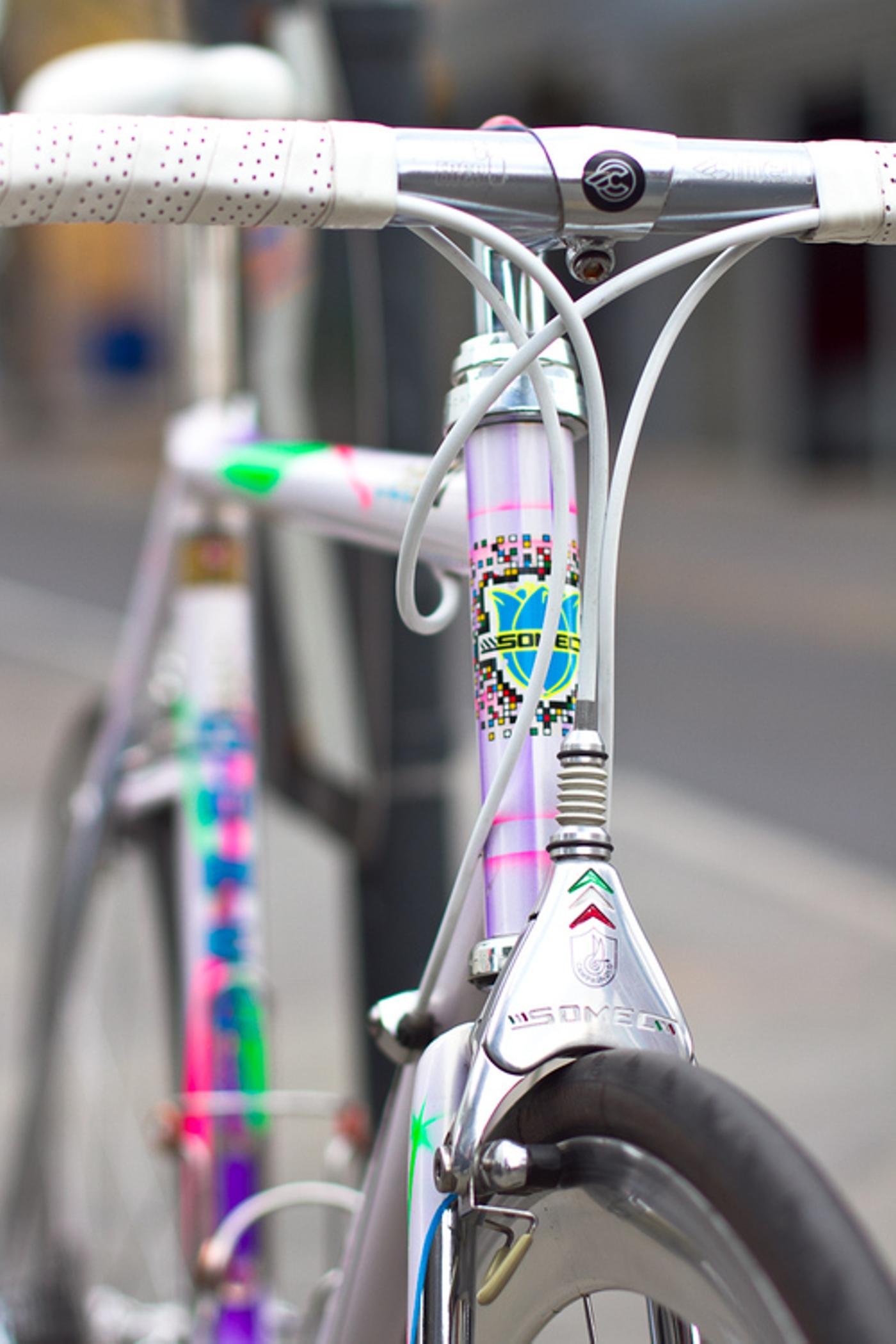 Some people would say that Dan from Shifter Bikes and Andy from Fyxomatosis are the active catalysts for the constant influx of Columbus MAX and Campagnolo into Southern Australia. After seeing their respective stables, I completely agree. While in Melbourne, I saw more Columbus MAX bicycles than anywhere else and this Somec is a prime example of Italian racing craft. I never got the chance to take photos of this creative, yet crazy concoction by itself at the 2011 Philly Bike Expo, so you’ll have to look at Alan’s ugly mug! This Yamaguchi school frame is affixed with some peculiar accoutrement, like that pentagram porteur rack. Hopefully, we’ll see more from Cycling WMD in 2012. Ian at Icarus is one of the most talented individuals I know and having worked with him on a frame, I can honestly say that his ability to surprise the client with over-the-top decadence is mind-boggling. When I showed up to the 2011 Philly Bike Expo, I was stoked to see my Viking MAX track bike but was stopped in my place by this stunning road bike he built for Chris. It should be no surprise that the most talked, Tweeted, Facebooked and blogged about track bike of 2011 made it to the top spot on this list. From the first time I saw the Stanridge Highstreet, I knew it’d be a hit on the internet. Aggressive geometry: check. Killer box-lining: check. Handmade in the USA: check. I had the opportunity to ride and document this bike for Adam and these photos went everywhere, including the Cycle EXIF 2012 Calendar.

Well, that’s it for the Prolly is Not Probably’s Top Beautiful Bicycles of 2011. Remember, you guys are responsible for the rankings. Next year, “like”, Tweet and comment on these posts to cast your vote!

Edit: I just realized that I neglected to look through my Interbike 2011 category, which doesn’t overlap with Beautiful Bicycles. That said, the following should be mixed in the list: SKYLMT came into the scene this year and immediately had the backing of the top riders in the FGFS community. At Interbike this year, they unveiled their 26″ fixed frame. Made in the USA and ready to rip! Jack and his Moth Attack track bike were show stoppers at Interbike this year. Made in the USA, beefy as all hell and as you can tell, can take a real whooping from Jack. You’ll find this match made in heaven ripping apart the boards in Los Angeles for Ritte.

Sorry guys! Bad organization on my part… Regardless, those are two gorgeous bicycles.