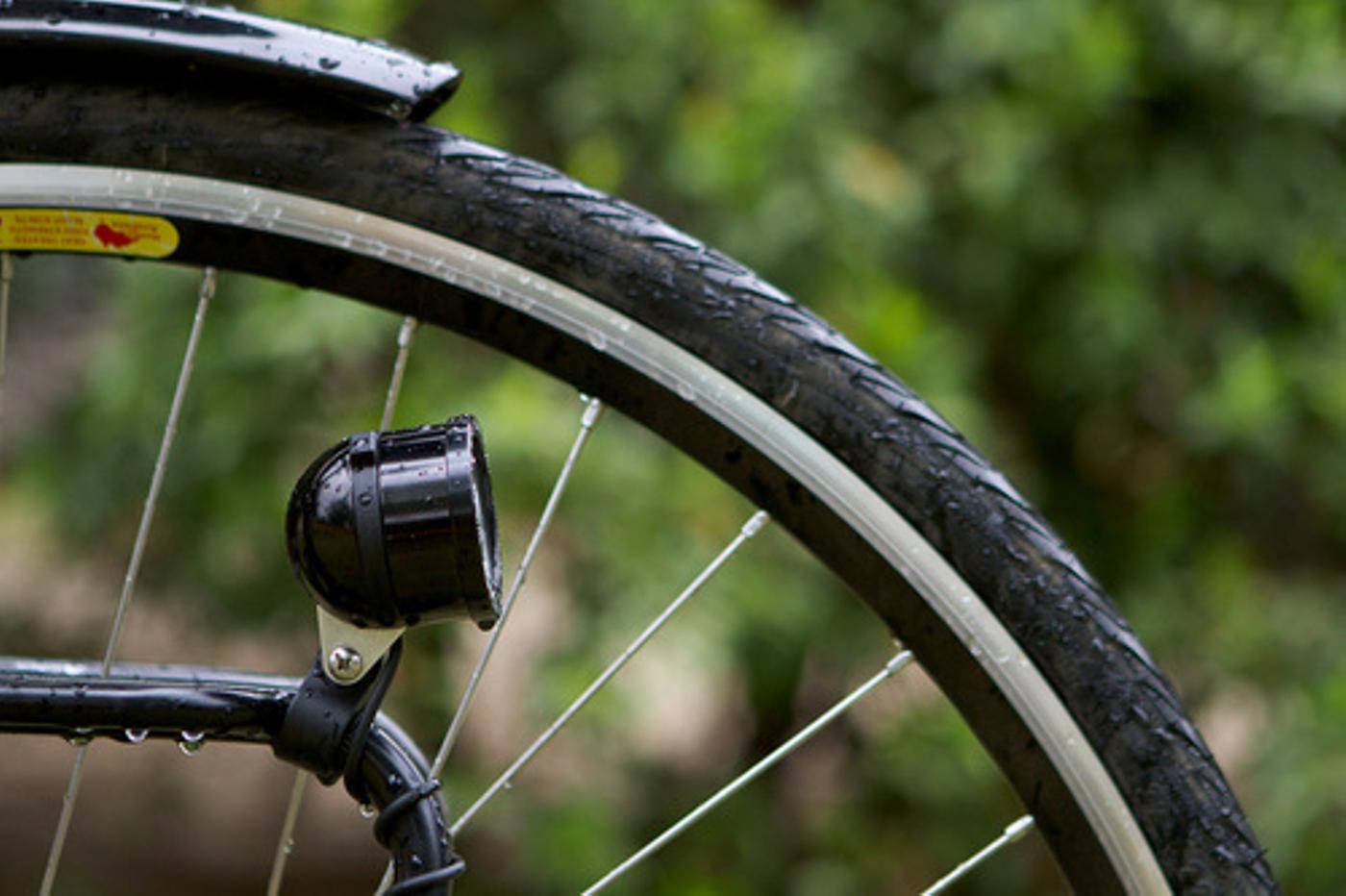 Every once and a while, I make an investment. Well, not literally, it’s more of a long-term bicycle component commitment. When I was researching generator hubs, I was drawn to the low-cost of many models but after talking to enough people, they all pointed me in one direction: the products of the German company Schmidt SON. The name SON will send goosebumps up the arms of rando and touring freaks and with good reason. Shortly after NAHBS, Bens Cycle started to carry Schmidt SON products so I sold some spare parts and put a deposit down. I’ve been using the SON Schmidt Delux hub with the Edelux LED head lamp for a week now and I am blown away at its performance.

Check out more of my Initial Reaction to the Schmidt SON Delux Hub and Edelux LED lamp below. We’ve been a bit parched for rain here in Austin and just as I set the bike up this morning, we got a nice spring shower. Albeit only for a few minutes. It made for a great addition to the photos. Just look at that hub. If there’s one thing ze Germans are known for, it’s precision and the Schmidt SON Delux hub is just that: one precise piece of bicycle engineering. The Delux hub is designed for the LED bulbs found in the Edelux lamp. This enables it to be lighter and more efficient than the SON 28 hub, which is meant for a halogen bulb or an LED lamp. “The SONdelux is the ﬁrst hub dynamo generator that is specially designed to match with modern LED-headlights (such as Edelux and B&M Cyo). The advantages of an LED over a halogen bulb is that they are highly efﬁcient at low power. This is why it is no longer neccessary to build a dynamo in such a way for it to give its nominal wattage at the lowest possible speed already. The SONdelux is therefore smaller and lighter than a hub dynamo that is made for a halogen lighting system (SON 28).” There’s a switch ring that allows you to set the lamp to various settings. All it takes is a rotation of your wheel to ignite the blast of crisp LED light. Even when you’re done riding, the lamp will stay lit for up to four minutes. Where you mount the lamp is entirely up to you. I chose to mount it on the front of my rack, so that it will nest just proud of my pannier and give me a nice, wide beam. 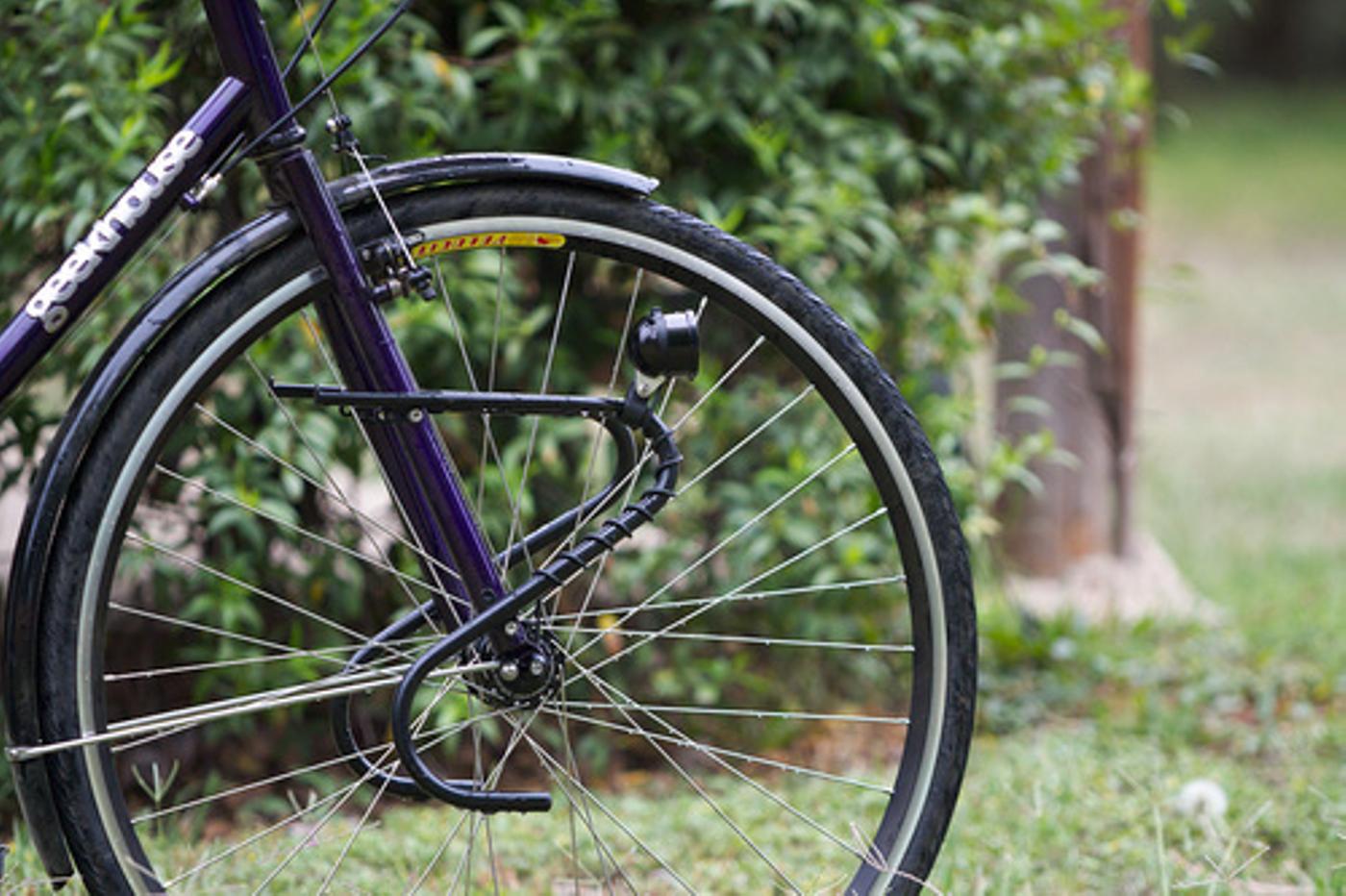 Some people use the Schmidt mounting adapters but I used a quick and easy rack mount from one of my other blink lights. The black anodizing is stealth-like on the front end of my Geekhouse Woodville. I got the 36h SON Delux hub laced 4x to a Velocity DYAD rim by the folks at Ben’s Cycle and they did a bang-up job!

So enough of the technical mumbo jumbo. How does this freaking thing look at night? I did the best I could to capture the beam it throws last night. The image on the left is in complete darkness with no overhead lighting and the image on the right is on a dimly-lit street. Impressive huh? It will even light an trail in the middle of the night. Here’s my current Woodville set up. The next upgrade I’ll be going for is a SRAM X long-cage rear derailleur and a 11-36 cassette to match the compact cranks. Overall, I’m very impressed with the Schmidt SON Delux Hub and Edelux LED lamp. It was worth going to the top of the pricepoint tree and even though I got a small discount from Ben’s Cycle, I would highly recommended checking one out if you ever get the chance. I’m in love! Once I nail down my touring details, I’ll be putting this to constant use. For now, it’s doing a damn good job at illuminating my midnight marauding.